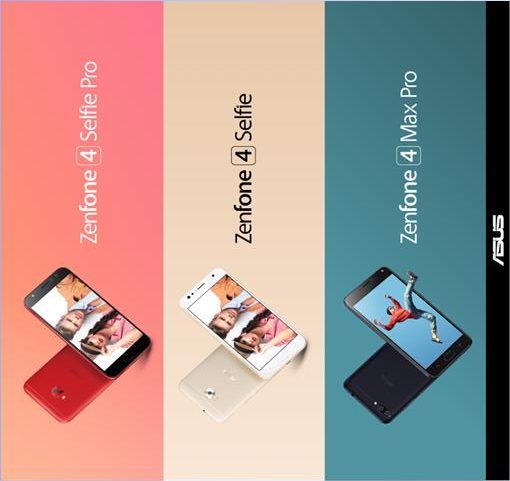 At the grand ZenFone 4 launch today in Taipei which saw Korean celebrity Gong Yoo take the stage, Asus stated that three devices out of the line-up will be initially available for sale in Malaysia – the ZenFone 4 Selfie, the ZenFone 4 Selfie Pro and the ZenFone 4 Max Pro. Here’s the lowdown on the three phones that will be hitting the Malaysia market on 25 August 2017. Of the three, two are designed primarily as selfie oriented camphones while the third has been designed as a workhorse with exceptional battery life. Common to the new line-up are dual camera setups whether it’s on the rear or on the front which looks like it will become a standard feature on future ZenFone models.

The new ZenFone 4 Selfie Pro is the priciest phone out of the line-up and retails for RM1,799. The ZenFone 4 Selfie retails for RM1,299 while the ZenFone 4 Max Pro retails for RM1,099. The three new phones will be available for on store shelves nationwide and at leading stockists from 25th August onwards in Malaysia though you can make preorders online at leading e-tailers Lazada and Shopee. If you make a preorder from between 17 August (today) to 24 August, you can get a free ASUS ZenPower 10,500mAh power bank worth RM99 along with other additional goodies such as a selfie stick, OTG cable, microUSB cable and screen protector while stocks last. Preordering the ZenFone 4 Selfie Pro nets you all the above and the additional bonus of a 16GB microSD card too. 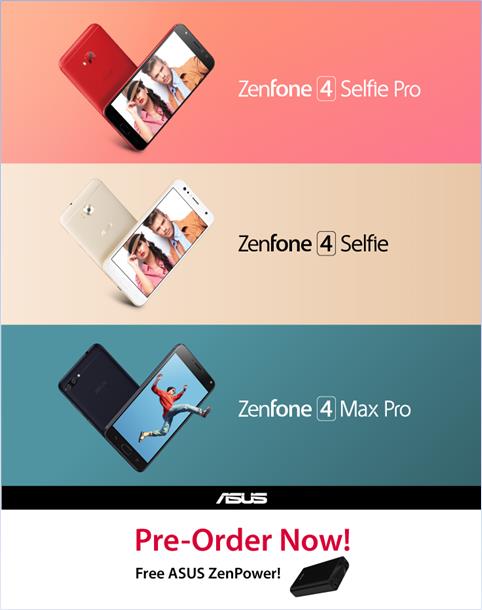 Zenfone 4 Selfie Pro (ZD552KL)
The announced ZenFone 4 Selfie Pro has specifications and hardware that are on the ball with the prior leak from the French site. The phone has a 5.5-inch Full HD AMOLED display, runs Android 7.0 Nougat overlaid with their ZenUI 4.0 on a Snapdragon 625 processor built on the 14nm finfet process and has 4GB RAM with 64GB of expandable storage with the hybrid SIM supporting up to a 2TB microSD card. The rear camera is a respectable 16-MP with an F/2.2 aperture but the front comes with a dual-camera setup that offers 24-Mp snaps and uses their new DuoPixel imaging technology.

A 3,000mAh battery with fast charging support keeps it juiced for the day with fast charge-ups as needed in the field. The ZenFone 4 Selfie Pro will ship in Rogue Red, Sunlight Gold and Deepsea Black for RM1,799 in Malaysia. 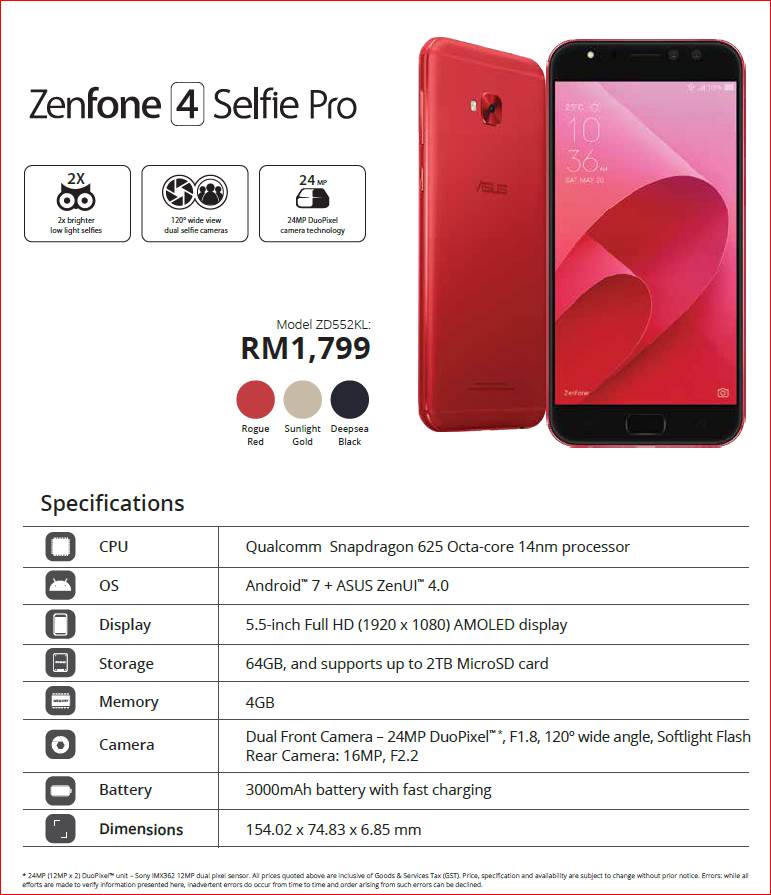 ZenFone 4 Max Pro (ZC554KL)
Unlike the prior leak, the ZenFone 4 Max Pro is a different beast that doesn’t pare down any the substantial battery size of its predecessors and surpasses it too and it even has a dual camera array on the rear. The phone has a 5.5-inch IPS 720P display, runs Android 7.0 on their ZenUI 3.0 user interface on a Snapdragon425 quadcore processor and has 3GB RAM with 32GB of expandable memory. The front-camera has a 16-MP sensor with a softlight flash and an F/2.0 aperture. The rear camera is a dual-camera setup that eschews the ZenFone 4 Selfie Pro’s comes with a 16-MP primary camera that has an F/2.0 aperture and a secondary camera with a 120-degree wide angle lens along with a softlight flash.

Keeping it powered is a whopping 5,000mAh battery which ought to keep it going for a couple of days at the very least. The price tag clocks in at RM1,099 and for Malaysia it will come in Deepsea Black, Sunlight Gold and Rose Pink. 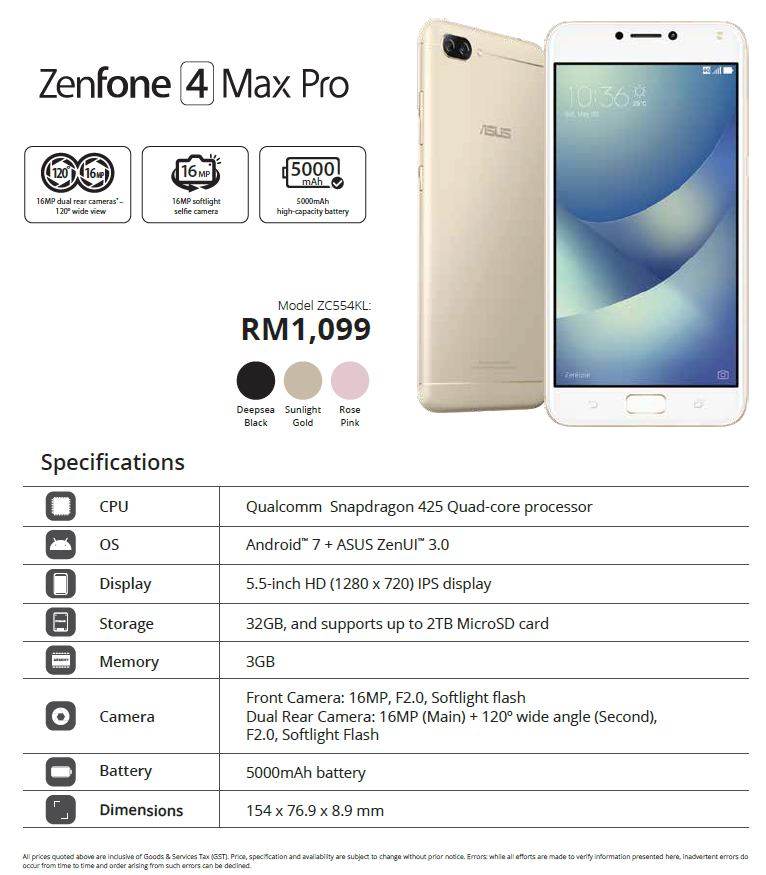 The rear camera has a single 16-MP sensor with an F/2.2 aperture. The rest of the hardware on the Zenfone 4 Selfie consists of a 5.5-inch 720P IPS display, has a more modest Snapdragon 430 processor running Android 7.0 overlaid with ZenUI 4.0, has 4GB RAM and 64GB of expandable storage along with a 3000mAh battery. The phone will ship in Rose Pink, Sunlight Gold, Deepsea Black and a quaint shade of Mint Green for RM1,299. Also announced was a cheaper model dubbed the ZB520KL for RM899 in Sunlight Gold and Deepsea Black though the specs and availability were unavailable at press time. 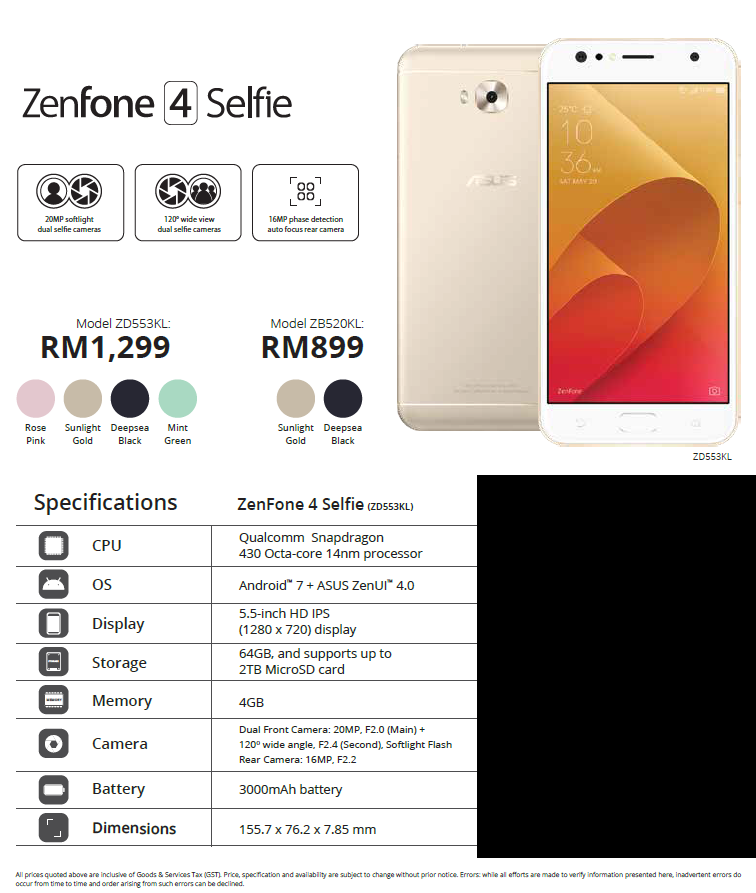