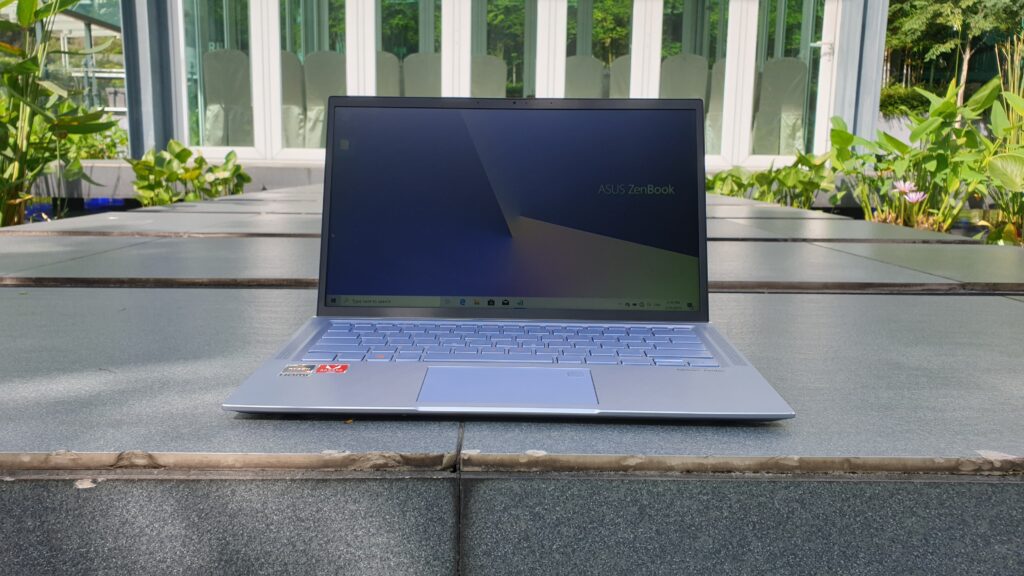 The Asus ZenBook series usually packs Intel processors and, in some cases, NVIDIA MX-series graphics but this time around, Asus has issued a variant of their new ZenBook 14 series with an AMD processor and Radeon Vega 8 integrated graphics. Dubbed the ZenBook 14 UM431, the notebook costs just a hair under RM3,000 which is a good deal cheaper than its Intel-packing cousins but how does it measure up to Asus’ usual standards? Well, let’s peek under the hood and find out. 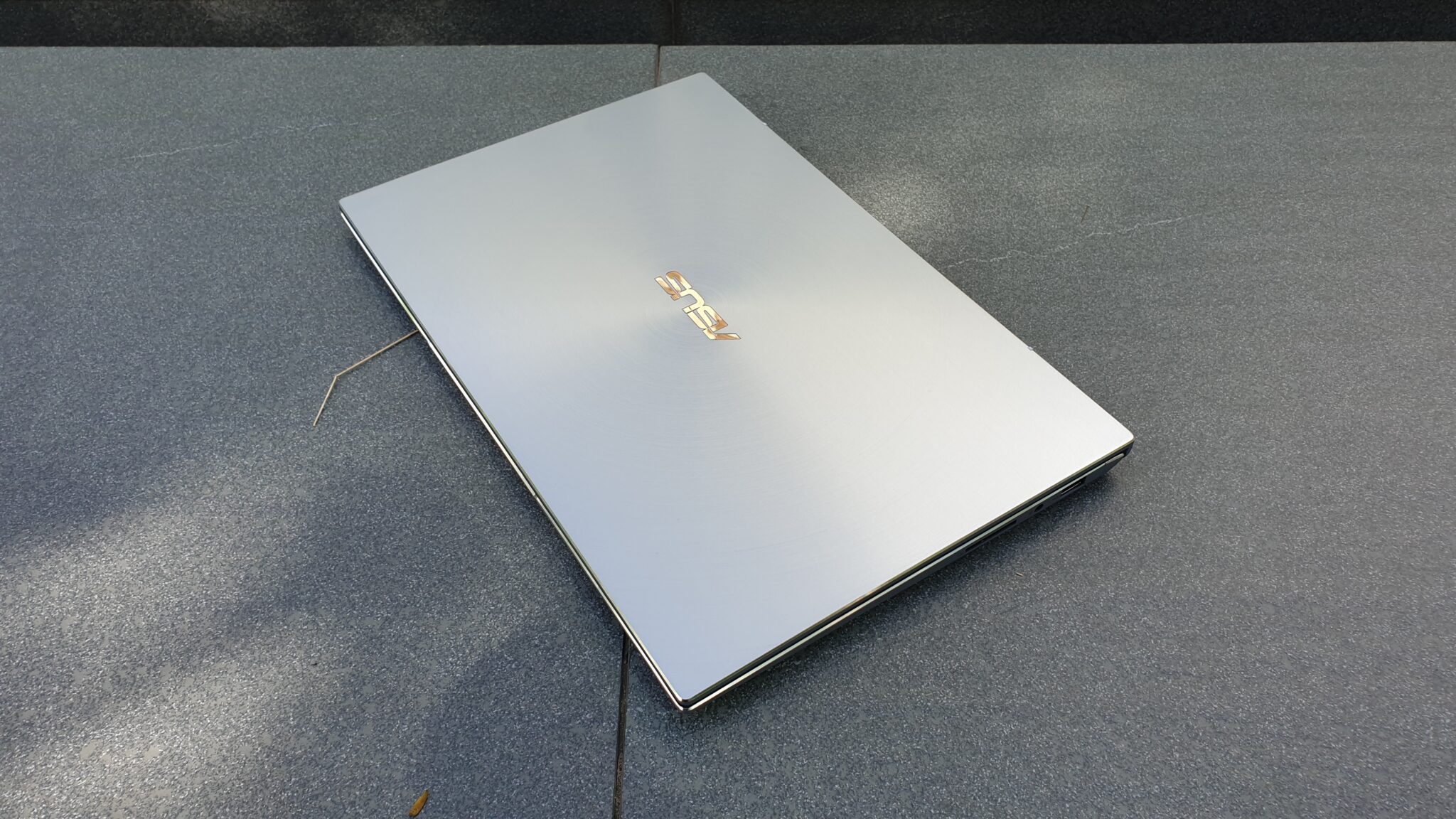 Out of the box, the ZenBook 14 UM431 comes with the obligatory charging cable, the notebook itself wrapped in a protective covering and, as a pleasant bonus, a small fabric sleeve to tote it around on the go. 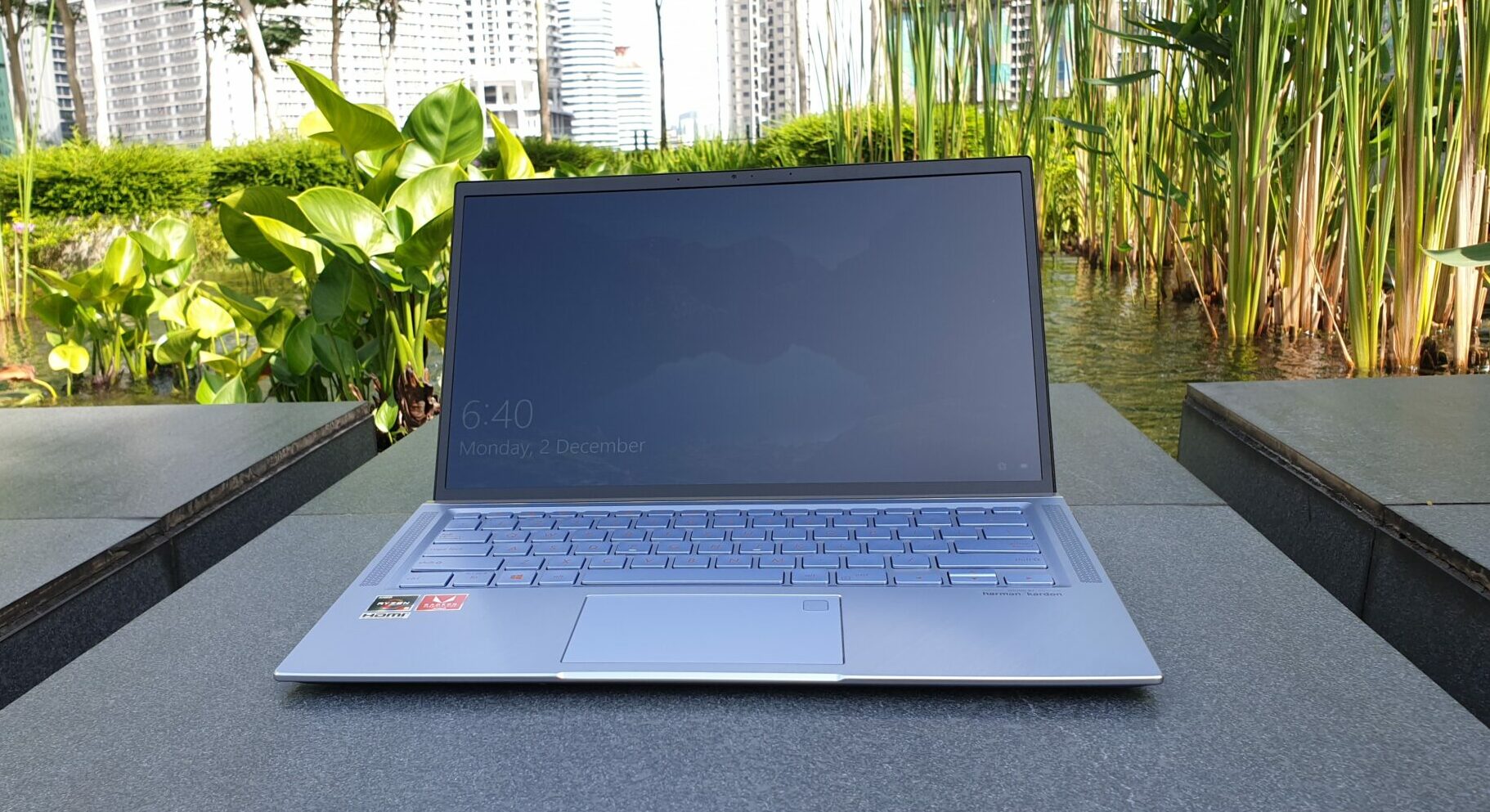 In terms of build quality, the ZenBook 14 does not disappoint and matches its Intel-toting siblings in almost every way. One important thing to note though is that the local variant of the ZenBook 14 UM431 has a conventional touchpad; variants for other regions may be kitted out differently with a NumberPad though this does not affect its functionality or performance in any way. 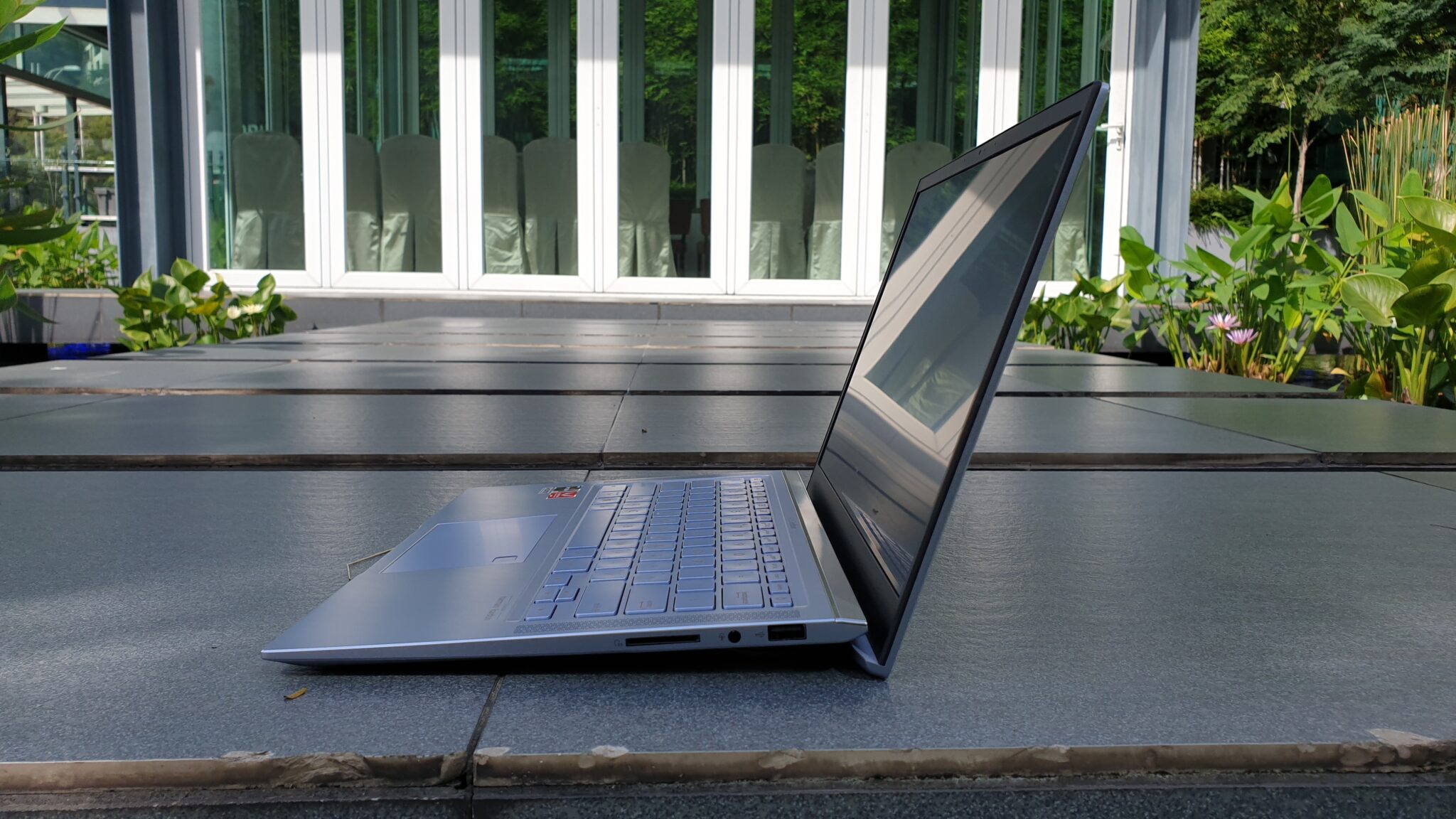 Externally, the ZenBook 14 UM431 is almost indistinguishable from its other Intel-packing siblings save for the addition of the AMD logo sticker on the palm rests and its unique model prefix designation; units with Intel processors usually have a UX in their model name whereas this ZenBook has UM. It also has a unique metallic gray finish veering on a shade of blue that they call Utopia Blue. The colour scheme is only really obvious under brighter light and looks quite unique to the eye. 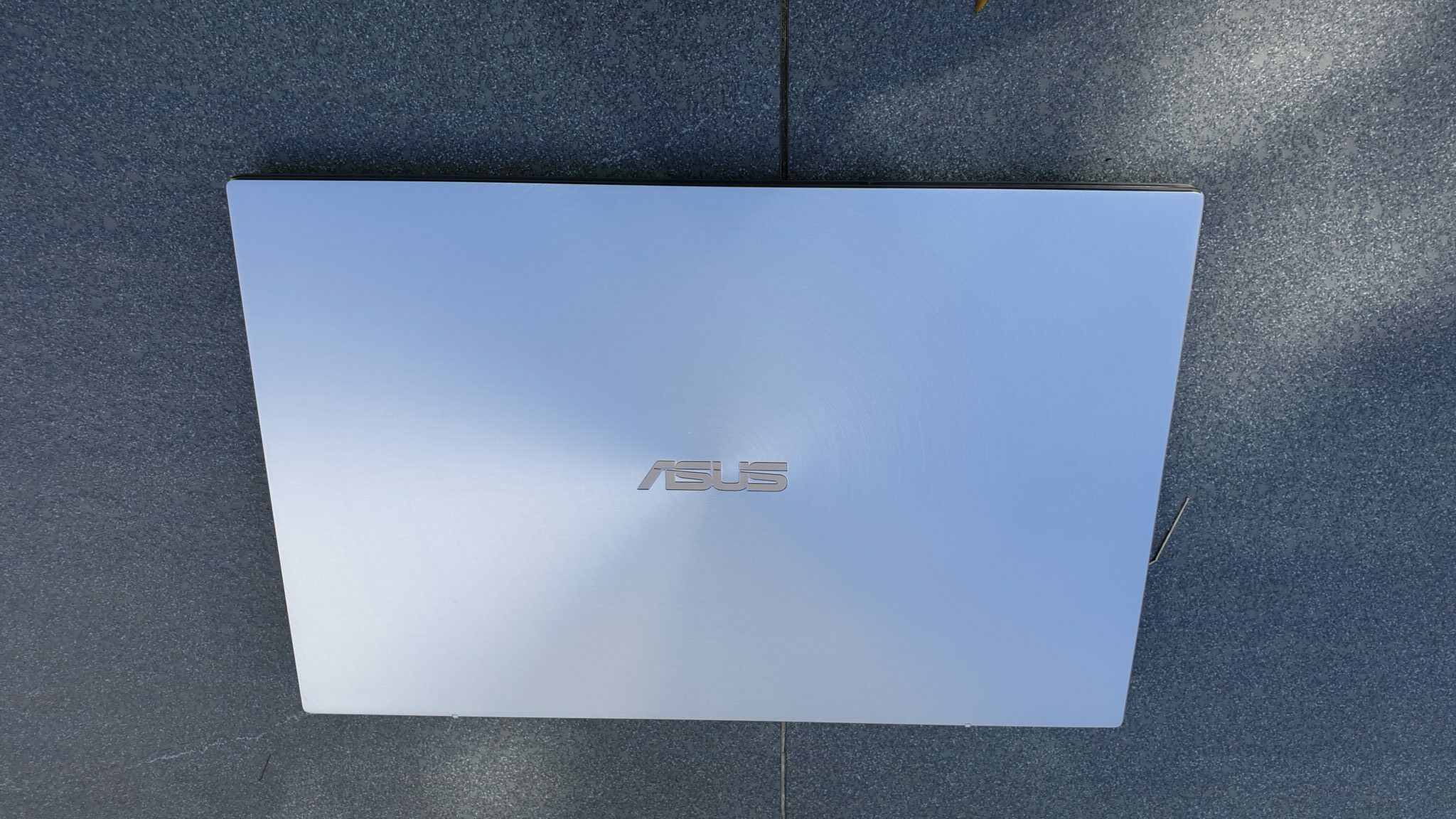 The top lid has their characteristic circular brushed metal finish centered around the Asus logo emblazoned in a shade of bronze. In addition to the top lid, the vast majority of the notebooks is hewn from metal which gives it a very premium look and feel that belies its asking price.

They’ve also integrated some chamfering around the edges of the top and bottom lid which does lend it a posher feel. The underside of the notebook is otherwise unadorned save for a series of ventilation grilles and a pair of bottom firing bass speakers that work in tandem with the two top-firing ones flanking the keyboard. 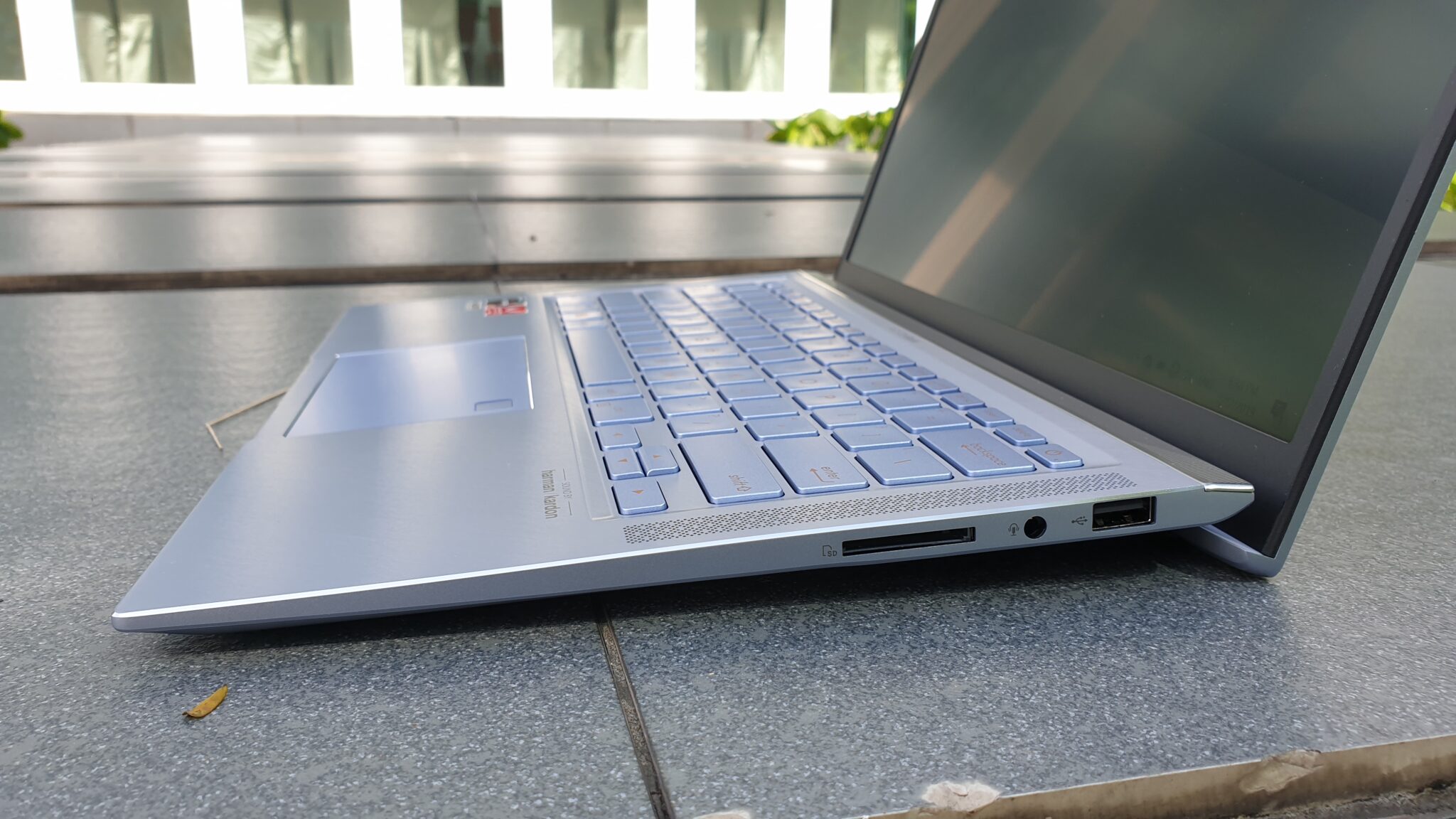 The hinge itself is wonderfully balanced such that you can open it one-handed. There’s a subtle indent cut into the bottom half so that your fingers have purchase which makes the job easier and the hinge itself sports their unique Ergolift design that elevates the base of the notebook slightly higher for better ventilation and a better typing angle.

As far as connectivity is concerned, the ZenBook 14 UM431 covers the essentials along with an extra added bonus that is rarely seen even in higher end notebooks. – a full sized SD card reader. The right side hosts the aforementioned SD card reader along with an audio jack and a USB 2.0 port. The left side of the notebook has a DC-jack to keep it powered, a full sized HDMI port, a USB 3.1 Type-A port and a USB 3.1 Type-C port as well as two indicators to show if it’s in operation or if it’s charging. 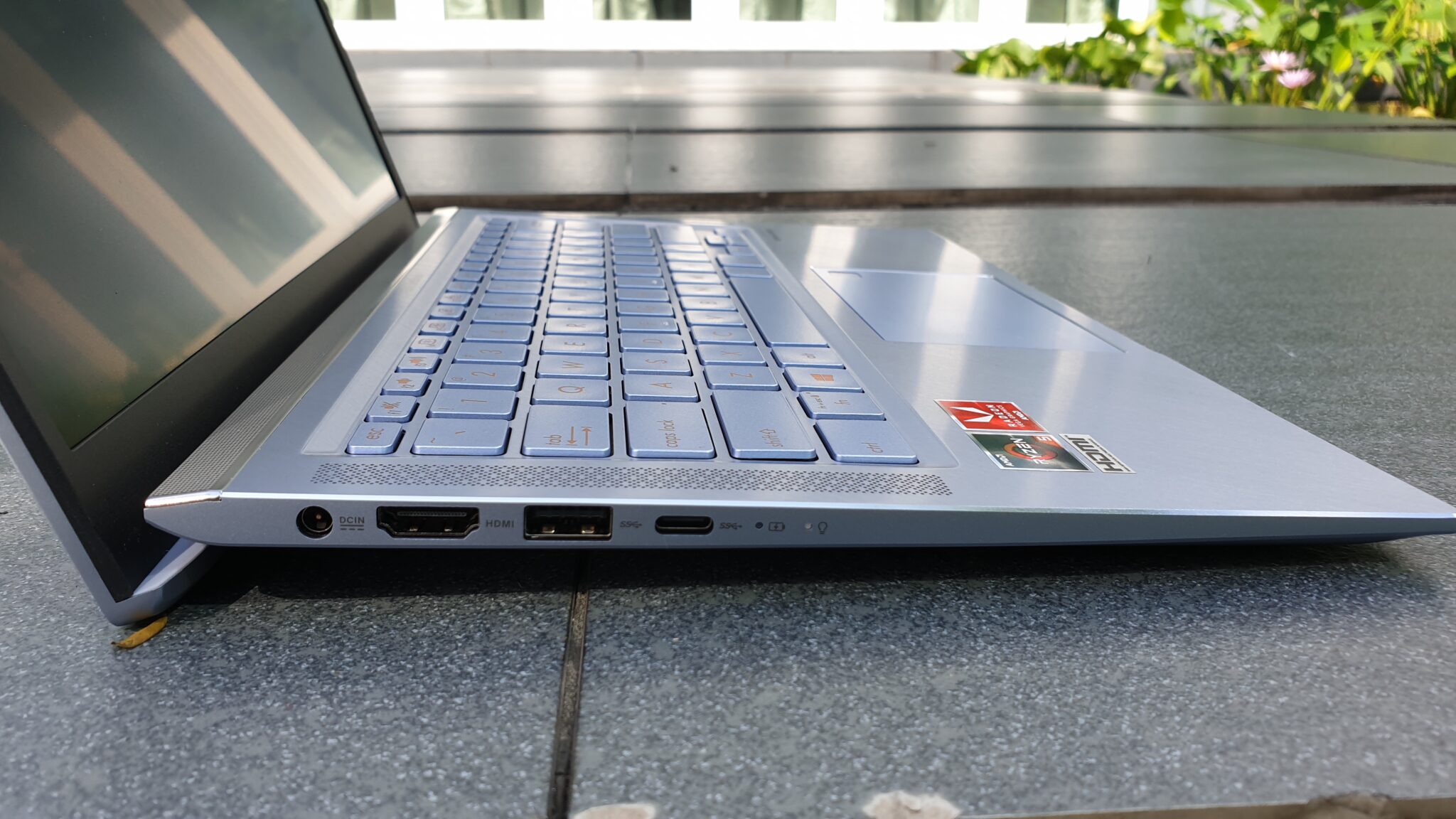 Flipping the lid open reveals exceptional craftsmanship on Asus’ part. You get a 14-inch Full HD display with narrow bezels all around and an 86% screen-to-body ratio. Emplaced just beneath it is a relatively compact keyboard flanked by top-firing stereo speakers tuned by Harman Kardon.

The keys themselves have 1.4mm key travel and are backlit for use under low light conditions. The addition of stereo speakers with a pair of dedicated bottom-firing stereo speakers makes hits one of the most sonically powerful notebooks in its price range which is an impressive achievement. The paired keypad itself is generously sized and also hosts a fingerprint reader for Windows Hello.

In terms of hardware, our test unit of the ZenBook 14 UM431 comes with an AMD Ryzen 5 3500U mobile processor paired with Radeon Vega 8 Integrated graphics, 8GB DDR4 RAM and a 512GB PCIe SSD which lends it quite a bit of punch for crunching pixels and paperwork. At RM,2999, this ensemble looks extremely promising indeed. 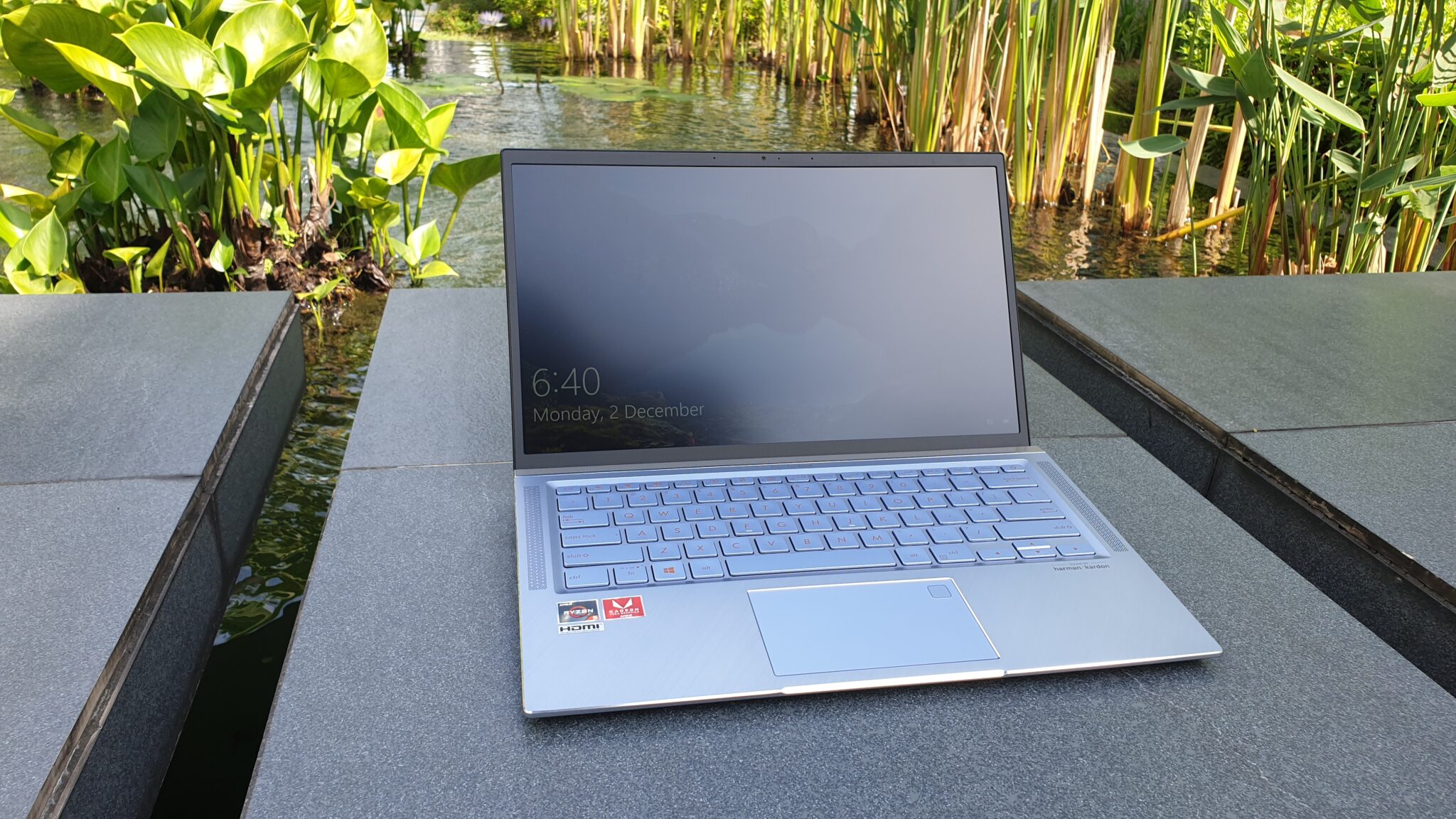 On the port alone, the ZenBook 14 hits it on the head with an HDMI port, an amazingly rare SD card reader, a USB 3.1 Type-A port and a USB 3.1 Type-C port, all of which are incredibly useful, especially for mobile workers. Add in the superb build quality and, at first blush, lush looking screen and good looking keyboard and you may have one heck of a bargain indeed. Stay tuned for our full review when we put it through its paces!