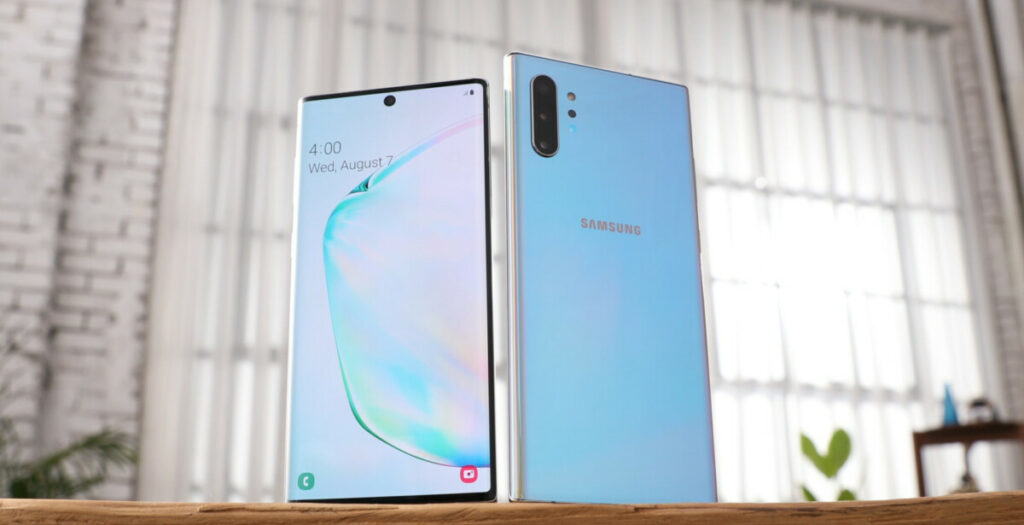 Bar the rather obvious differences in size, both the Galaxy Note 10 and Galaxy Note 10+ sport a number of distinct differences and also similarities to each other though some of these features are not apparent at first glance. We’ve got you covered and list down what makes both phones similar and different to each other… 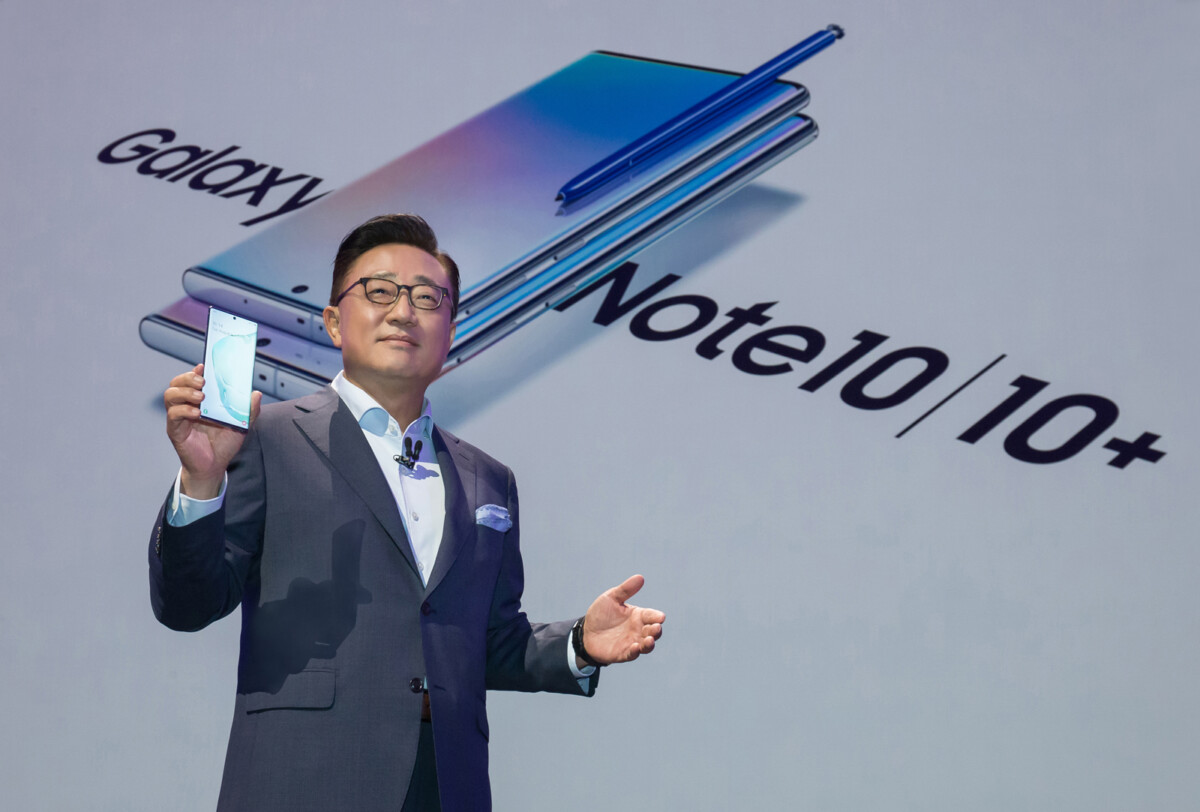 DJ Koh, Head of  Samsung Mobile unveiled the Galaxy Note 10 and Note 10+ to the world at the Samsung Unpacked show in Brooklyn

Let’s get the most obvious one out of the way first. The Galaxy Note 10 has a smaller 6.3-inch Dynamic AMOLED Infinity-O display with FHD+ resolution which is 2,280 x 1080 pixels. The Galaxy Note 10+ on the other hand has a larger and sharper display with the phone packing a 6.8-inch Dynamic AMOLED Infinity-O touchscreen with Quad HD+ resolution (3,040 x 1,440). 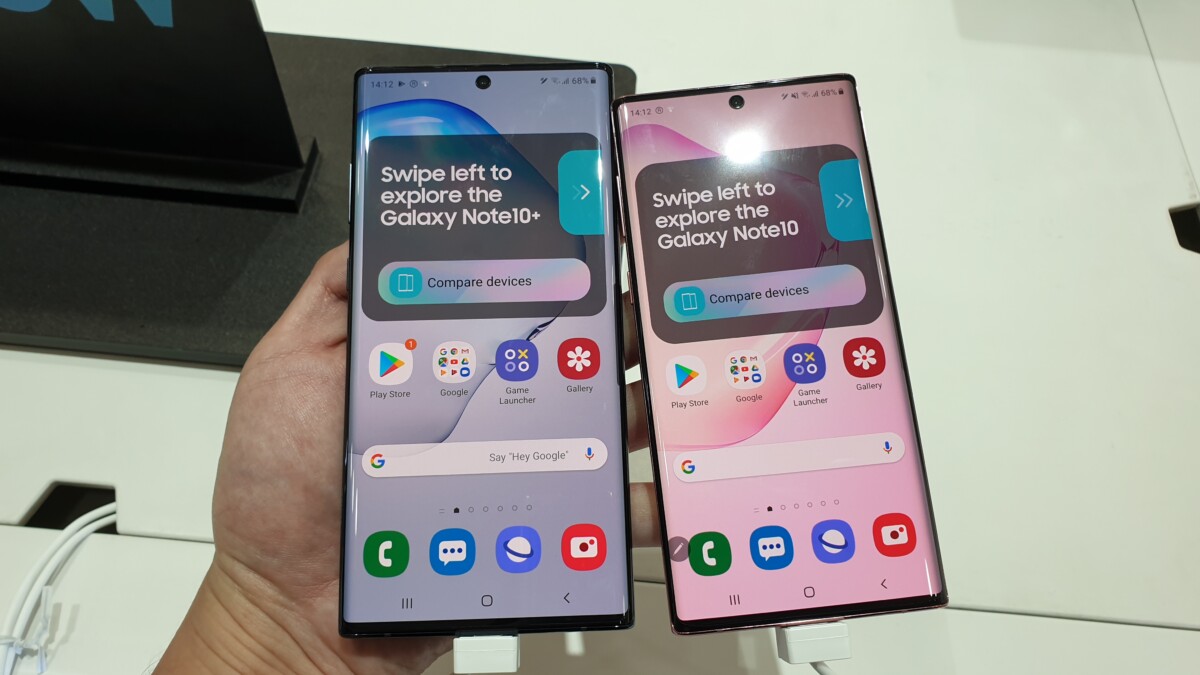 The additional screen real estate and sharpness of the Galaxy Note 10+’s display are especially welcome when gaming and enjoying 4K HDR content though the FHD+ resolution the smaller Galaxy Note 10 is plenty and more than sufficient for daily tasks along with slightly less drain on the built-in battery.

The displays on either phone are HDR10+ certified so you’ll get more luscious colour rendition, better contrast and brightness too with the right HDR content. To wit, both phones are also rated for 100% Mobile Colour volume, meaning exquisitely lifelike colour rendition onscreen.

Both displays are also sheathed in Corning Gorilla Glass 6 and feature a small in-display cutout up top for the selfie camera with bezels that stretch to the edges of the phone to make the front consist almost entire of the touchscreen, offering some of the largest screen-to-body ratios ever in a smartphone. The Galaxy Note 10 has a whopping 90.9% screen-to-body ratio while the Galaxy Note 10+ edges out slightly with an impressive 91%.

RAM and storage plus hybrid or dual SIM card slots

The Galaxy Note 10 only comes in one storage configuration which has 8GB RAM and 256GB of non-expandable storage as the phone only has a dual SIM card tray. 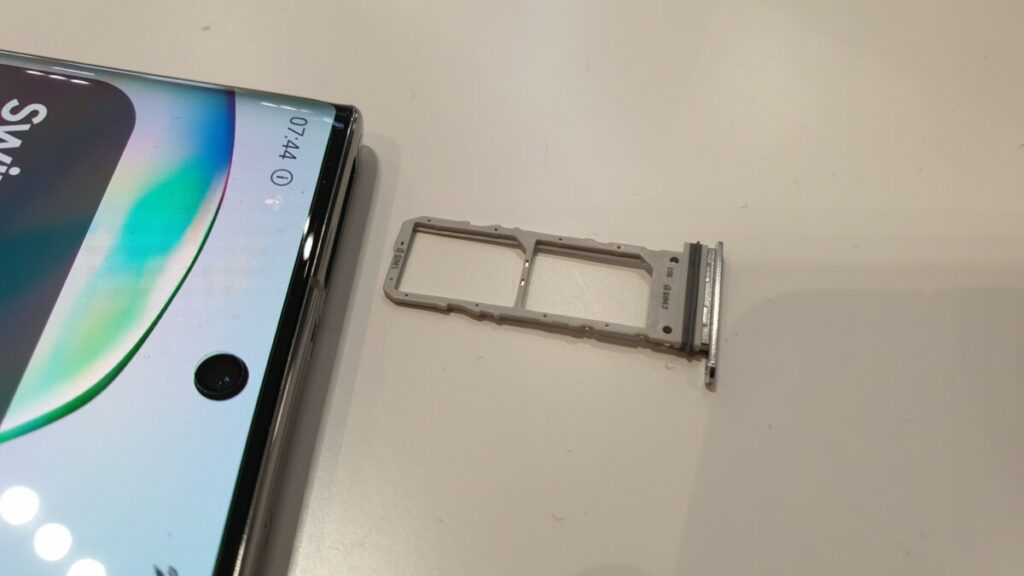 The dual nano SIM card slot of the Galaxy Note 10

The Galaxy Note 10+ comes in two storage configurations with both packing 12GB RAM as standard with your choice of 256GB or 512GB of storage. The phone also has the notable advantage of having a hybrid SIM card slot so you can either use two nano SIM cards simultaneously or one nano SIM card and an additional microSD card up to 1TB in size to augment the already substantial storage. 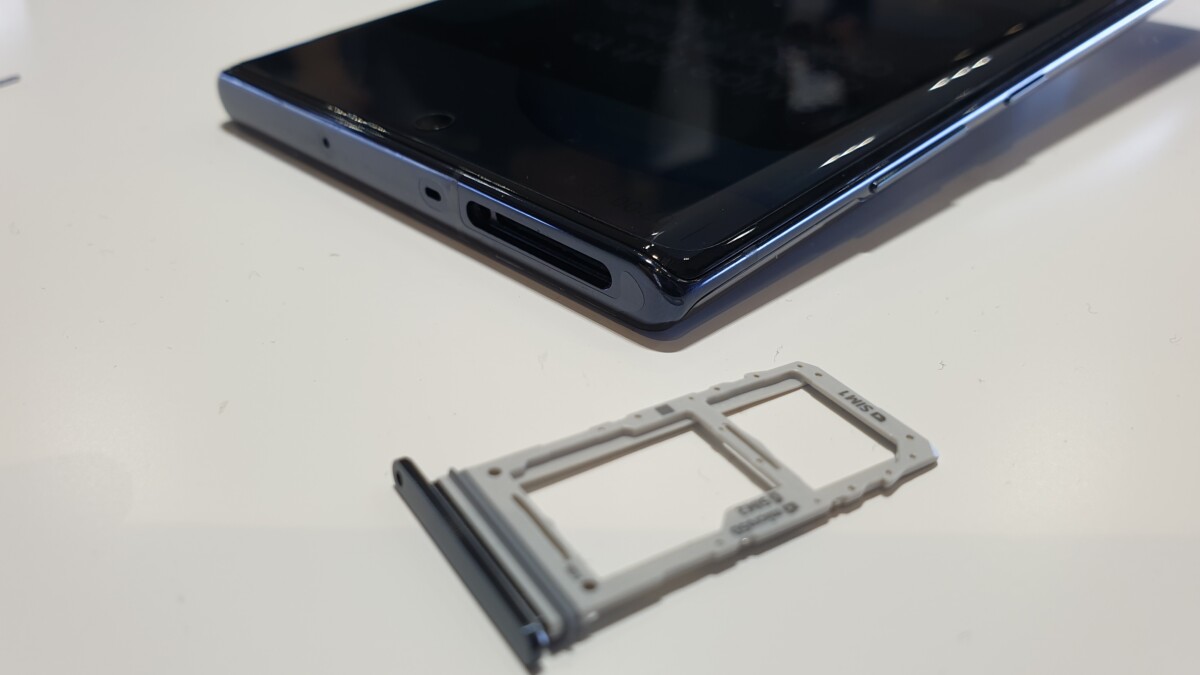 That’s effectively laptop level storage crammed into the Galaxy Note 10+ which is quite a feat indeed though 256GB is also a substantial amount indeed that’s double the base configuration of last year’s Galaxy Note9. 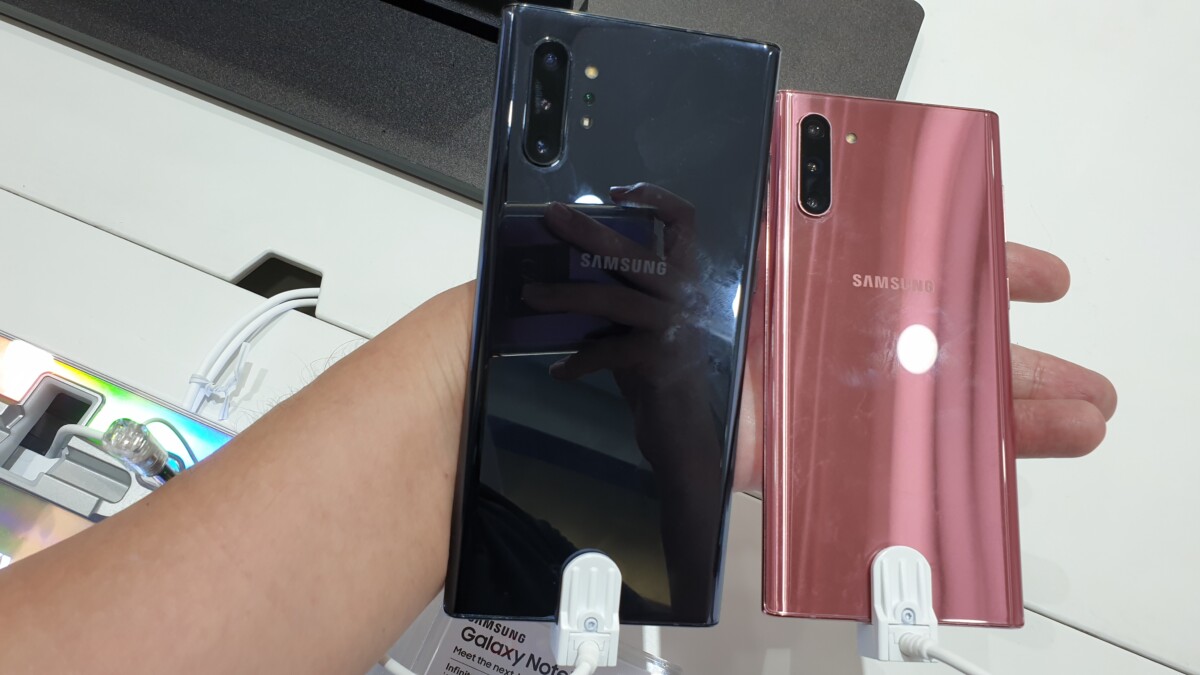 For the uninitiated, a ToF camera uses infrared light to capture depth information to accurately measure distances from the camera and an object which can be used for object scanning, augmented reality, 3d photography and several other interesting applications.

The addition of the TOF 3D camera for the Galaxy Note 10+, which they’ve dubbed as a DepthVision Camera allows the phone to capture subjects as a 3D rendering to be added to photos and videos which adds new creative options.

The Galaxy Note 10 Plus has a TOF 3D VGA camera mounted next to the primary camera array.

TOF 3D camera aside, the primary array on both phones consists of a vertically aligned triple camera array that consists of a primary 12-MP Dual Pixel camera with optical image stabilisation and a changeable aperture that can swap between F/1.5 to F/2.4 depending on light conditions, a secondary 16-MP ultra wide angle lens with a 123-degree field of view and a third optically stabilised 12-MP lens with a 2x telephoto lens. The front hosts a 10-MP selfie camera with both front and rear capable of 4K video capture. 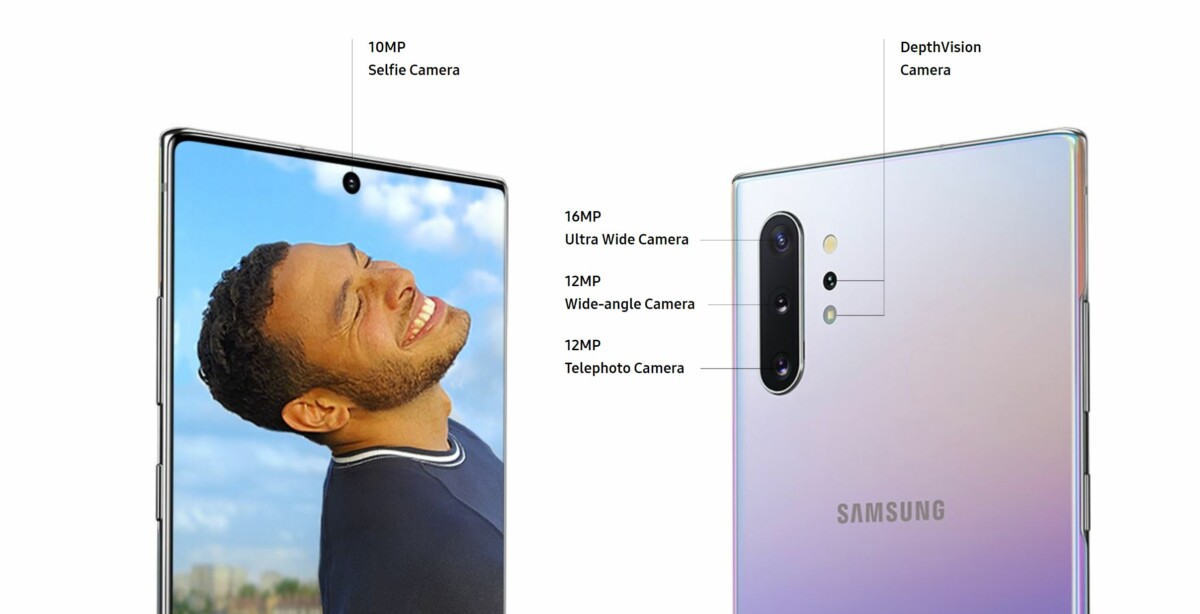 Both the Galaxy Note 10 and Note 10+ both have Samsung’s new Live Focus video which means that you can capture footage and enable a variety of bokeh effects to arfully defocus the background. This is on top of enhanced video stabilisation for even smoother, judder free video.

The biggest traditional pain point of a phone – battery life has been improved in the Galaxy Note 10 series phones with better endurance with more efficient battery management and more importantly, faster charging.

The interesting pickle here is that both phones will come with a 25W charger with the box though if you want to take advantage of the Note 10+’s 45W fast charging, you’ll need to buy the 45W charger separately. For those on the go, that little extra edge will come in handy as Samsung has stated that it can offer a full day’s worth of battery life in just 30 minutes of charging.

Last year’s Galaxy Note9 was 8.8mm thin and weighed 201g while its S Pen was 3.1g in weight. This year’s Galaxy Note10+ is able to shave this down due to using aluminium in its construction along with refinements in design to just 7.9mm thin while weighing 196g. The slammer and slimmer Galaxy Note 10 is just as thin as the Galaxy Note 10+ at 7.9mm but shaves the weight down to just 168g.

The new revamped S Pen which has a built-in accelerometer and gyroscope is even lighter too at 3.04g. 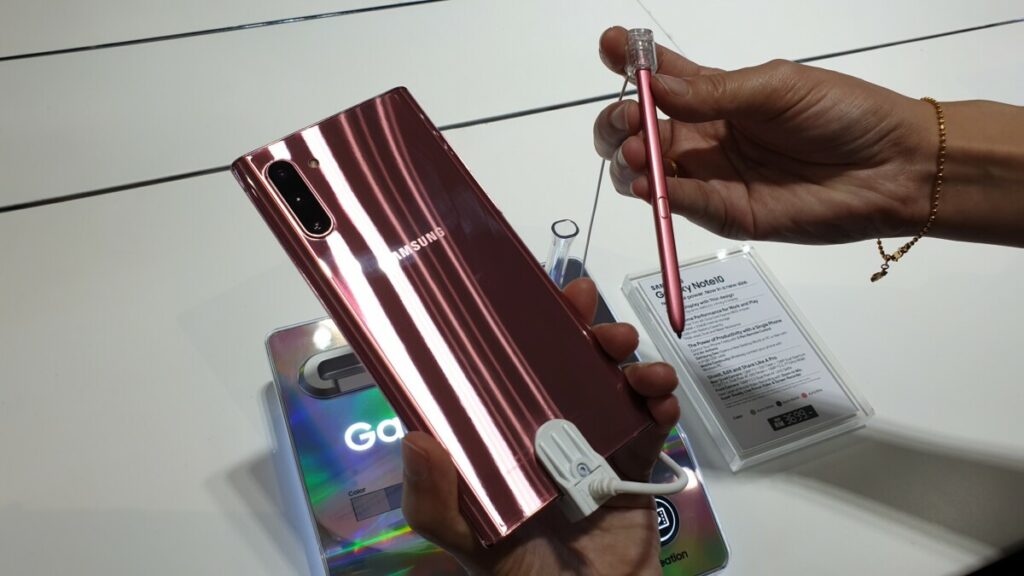 These weight and space savings in the Galaxy Note10+ are substantial feats of engineering prowess indeed, more so the fact that they’ve achieved this while cramming in a larger display and battery while shaving 5g off what the Galaxy Note9 weighed and being 0.9mm slimmer to boot. The Galaxy Note 10 has even more substantial weight savings at 33g lighter than the older Note9. 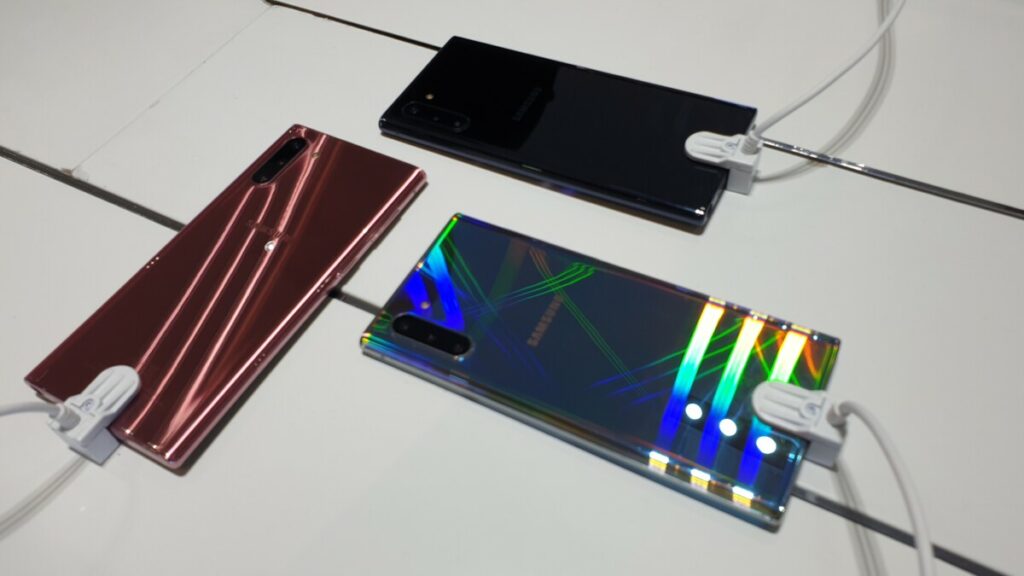 Colour choices for the Galaxy Note 10 in Malaysia 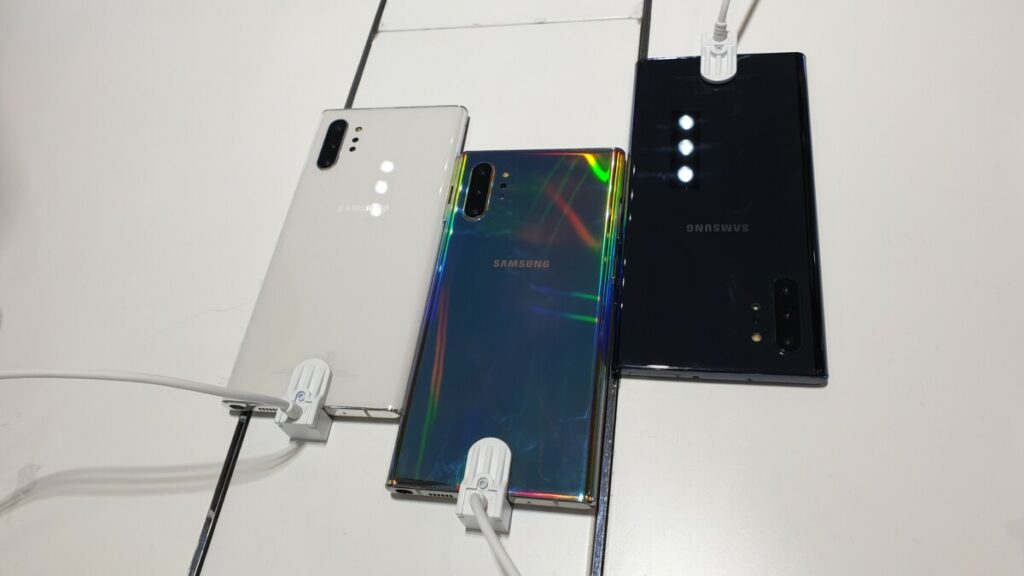 Colour choices for the Galaxy Note10+ in Malaysia

In terms of colour choices for Malaysia, prospective buyers get the chance to acquire the Galaxy Note 10 in 3 colours – Aura Glow, Aura Black and Aura Pink. The Galaxy Note10+ will come in Aura Glow, Aura Black and Aura White. The new Aura finishes provide a novel new iridescent colour gradient reflects the light in different ways depending on how you hold up the phone which is a step up from the flat metallic finishes in the prior generation of Samsung phones.

All right, so what’s similar about the Galaxy Note 10 and Note 10+ then?

Running things under the hood for both phones is Samsung’s latest Exynos 9825 7nm octacore processor built on an EUV lithography process. On paper, this provides a 33% improvement in CPU performance and 42% GPU performance compared to the older Exynos 9810 processor seen in the Galaxy Note9.

Another feature common to both phones is the new upgraded S Pen. Last year’s Galaxy Note9 had an innovative S Pen which featured BLE connectivity, allowing it to be used as a remote control for presentations and the camera shutter.

The new upgraded S Pen for the Note 10 series adds in gesture controls, allowing you more precise control of the camera and selected apps. By waving the S Pen up, down, left and right as well as rotating it clockwise or counterclockwise, you can zoom in and out, swap between the front and rear cameras and even change modes too without ever having to touch the phone. Brilliant, really for presentations and selfies. 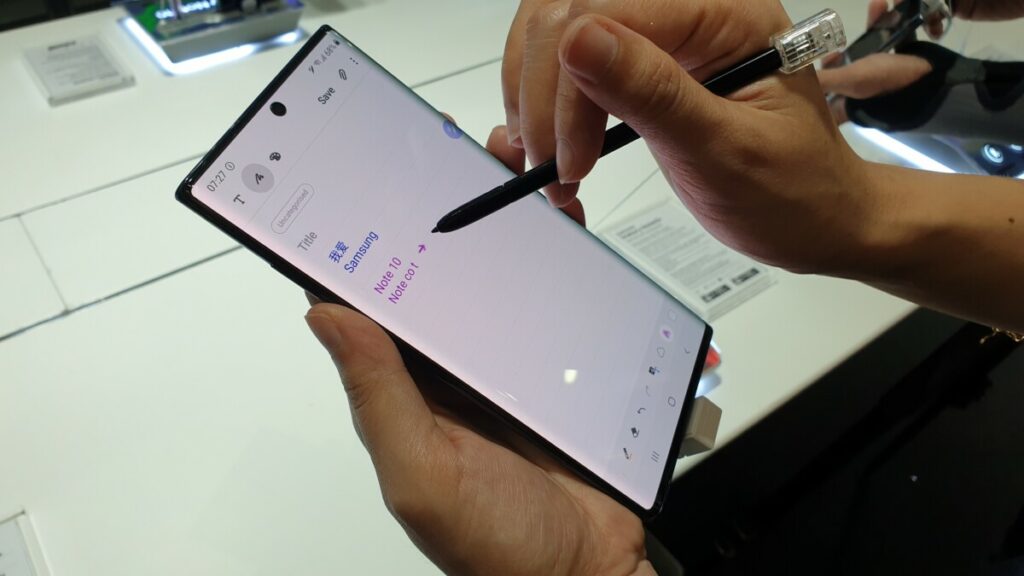 Another feature common to both phones is also, alas, an omission of sorts as both lack a 3.5mm audio jack. Fortunately, Samsung has added in an AKG Type-C pair of headphones though the preorder for the Galaxy Note 10 bundles in a free pair of their exceptionally good Galaxy Buds.

The Galaxy Note 10 and Note 10+ are currently available for preorders until 18 August 2019 with a host of free goodies bundled in for good measure.

If you acquire the Galaxy Note 10 on preorder at its retail price of RM3,699, you can get a free pair of Galaxy Buds, a wireless battery pack and one Protection Plus policy collectively worth RM1,058. The Galaxy Buds are one of Samsung’s best pair of wireless buds. You can check out our review where we field tested it here.

The Galaxy Note 10+ 256GB on preorder retails for RM4,199 and offers a free upgrade to the 512GB model on top of the Protection Plus policy and wireless battery pack with a collective value worth RM1,159. That extra 256GB of storage space future proofs the phone for quite a few years down the line and if needs must, you can likely download several seasons of Game of Thrones in one fell swoop if needed.