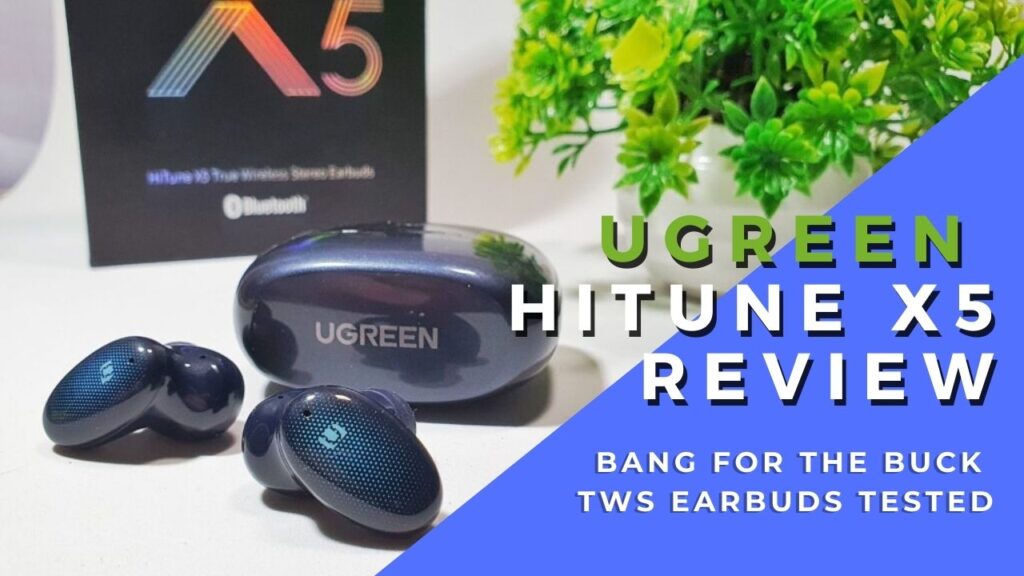 UGREEN is best known for offering some seriously good accessories including their 65W GaN charger and X-Kit laptop stand but they’ve been a dark horse in another field – wireless earbuds. 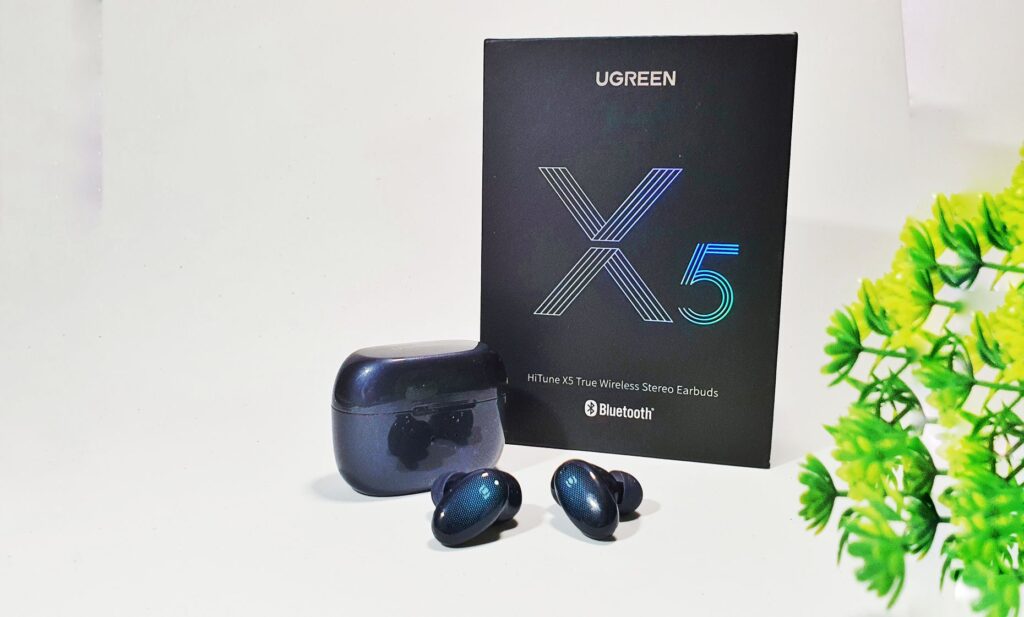 Belying its modest price point, our UGREEN HiTune X5 review unit ships in a rather classy black cardboard box emblazoned with an eye-catching chromatic X5 logo on the front and vital product statistics on the back. Popping the lid open reveals a modest selection of gear neatly nestled into cardboard trays. You get:

The addition of an extra small set of earbuds on top of the typical three is out of the norm but is a welcome bonus for those with small ear canals. The rest of the kit on offer is fairly normal and on par with other wireless earbuds. 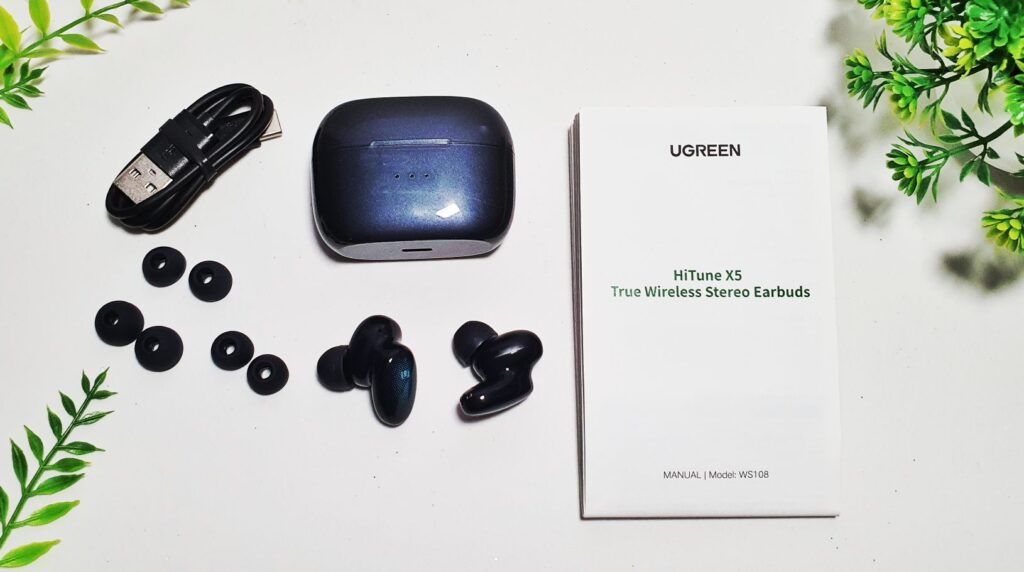 Our UGREEN HiTune X5 review sample comes with the usual assortment of kit and also features four sets of ear tips to offer a better fit.

The UGREEN HiTune X5 features a design that resembles the typical popular ‘treasure chest’ form factor though it differs slightly with a wider, flatter and taller charging case  to make it easier to pocket. Another advantage of employing a taller, wider design is that it’s also easier to open one-handed.

These design changes are an improvement that address quirks seen in the earlier UGREEN HiTune earphones that we reviewed earlier which had a wider, flatter case and was slightly more finicky to open. 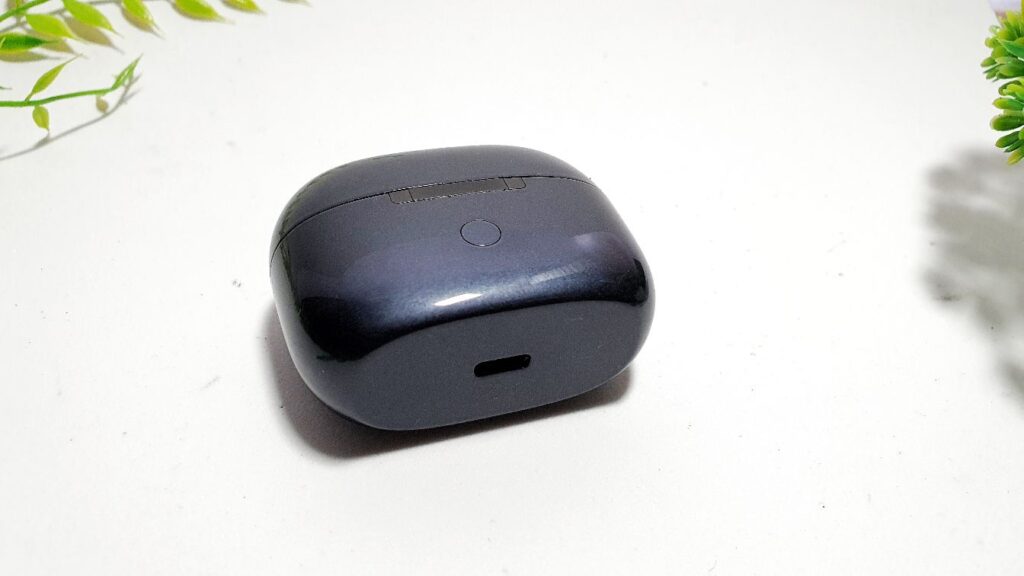 Up front, the charging case features a trio of white charging LED indicators that approximately indicate remaining battery life in 33% increments and which blink when it’s being charged. The USB-charging port is plonked on the base of the case with the rear taken up by a hinge and a reset button.

When opened, you’ll notice that UGREEN has opted to dock the earbuds vertically into the case which also somewhat explains its tall form factor . Each earbud clicks into place with a series of magnets and remains secure even with vigorous jostling. 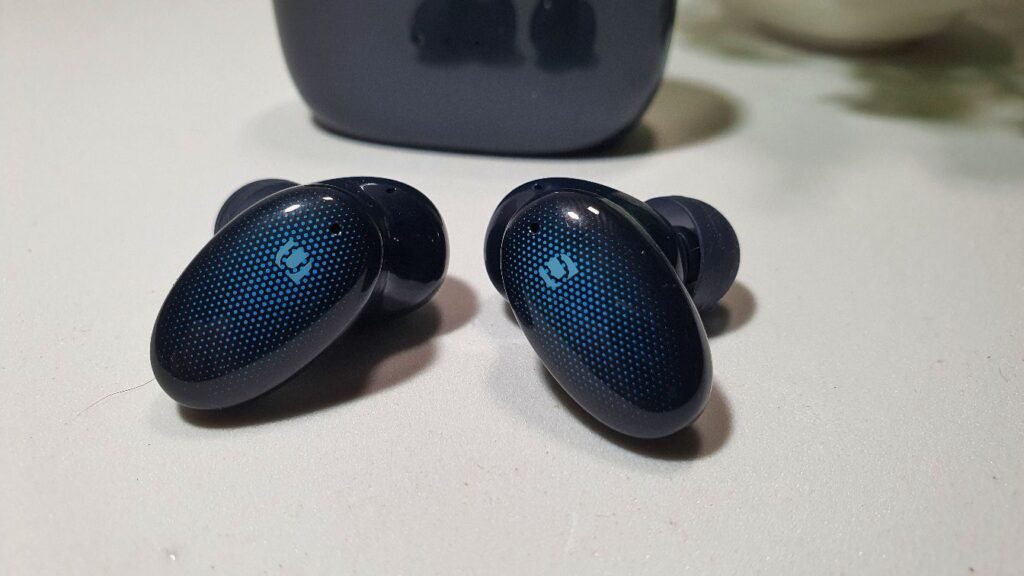 The earbuds themselves employ a hybrid of the typical in-ear design with a bulbous driver and battery housing but it also employs a distinctive stem housing that looks rather cute.

In terms of finish, the charging case itself is done up in a semi-reflective metallic grey finish while the earbuds feature a quaint screen-printed surface done up in blue with the rest of the earbud housing done up in shiny black.

It does look somewhat plasticky, made more so by the fact that the finish is a fingerprint magnet but build quality is good without any rattling and the whole affair has a solid feel to it when held.

The UGREEN HiTune X5 comes with the following specifications:

Under the hood,  the earbuds feature 10mm dynamic drivers enhanced with what UGREEN refers to as Superbass enhancement tech for richer bass. 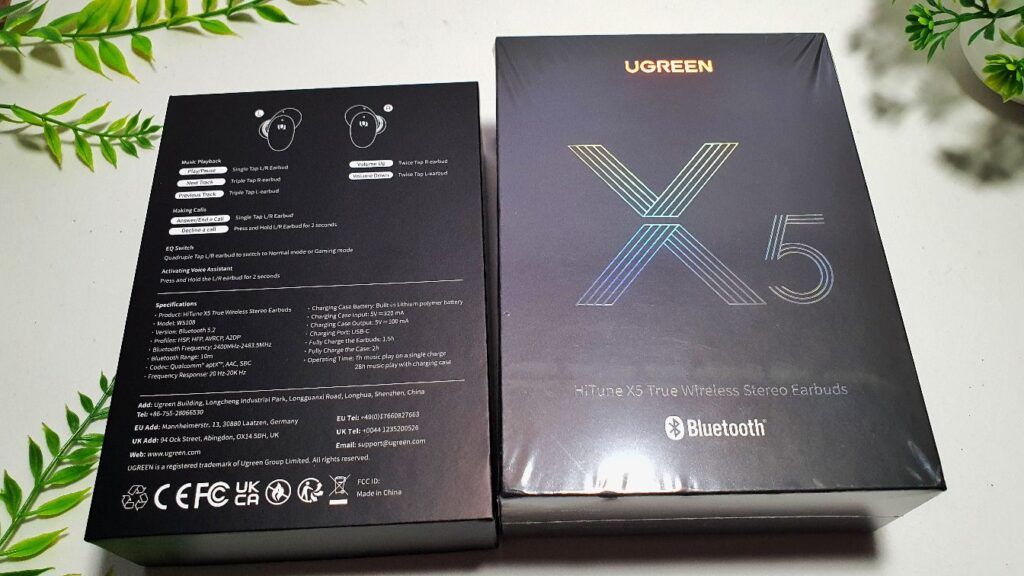 Of note is the inclusion of a power-efficient Qualcomm QCC 3040 audio system on a chip (SoC) with support for aptX, AAC and SBC codecs as well as Qualcomm’s latest CVC 8.0 echo cancelling and electronic noise suppression tech for better quality voice calls.

Getting our UGREEN HiTune X5 review sample up and running is fairly straightforward like other wireless earbuds though with some minor twists to the standard formula.

The package bundles the earbuds within the charging case itself but insulates the earbud’s pogo pins with a strip of plastic film to prevent them from charging in the case . You’ll have to remove the strip first before giving it a full charge though it’s already partially charged so it’s ready to rock and roll in about an hour or so.

The moment you flip the lid open, it’ll immediately start pairing mode and it managed to effortlessly detect and pair up with an ASUS ZenBook Duo UX482 in seconds as well as several other phones that include a Huawei nova 8i and Galaxy A52 without issues. 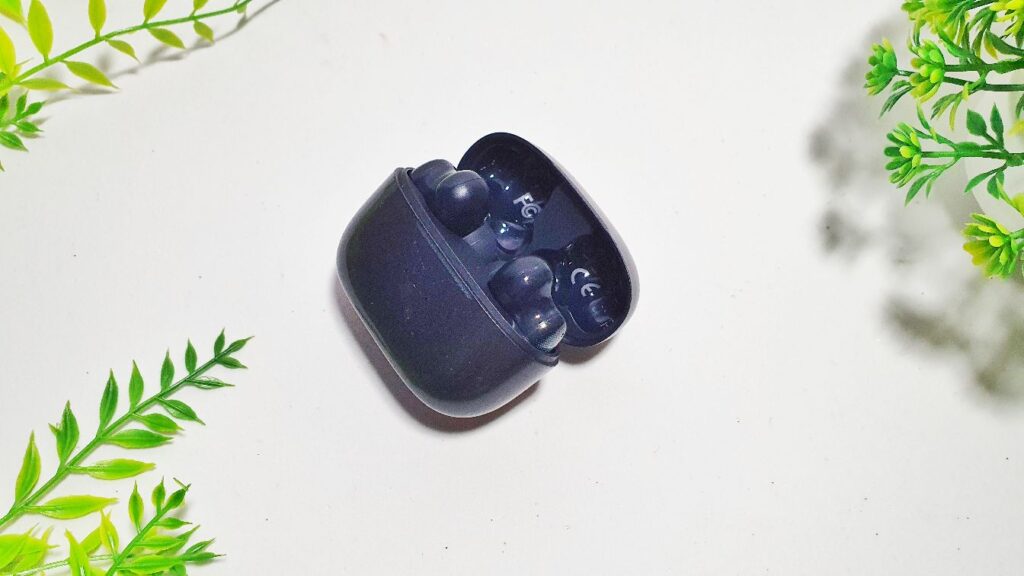 Controlling the earbuds is achieved via the traditional series of single, double and triple taps on the left and right earbuds though not all controls are mirrored.

The controls are hardwired into the earbuds which means you can’t customise it to your preferred setup. There are also no accompanying apps or means to tweak the equalizer settings so you’ll have to appreciate the existing acoustic signature on offer. 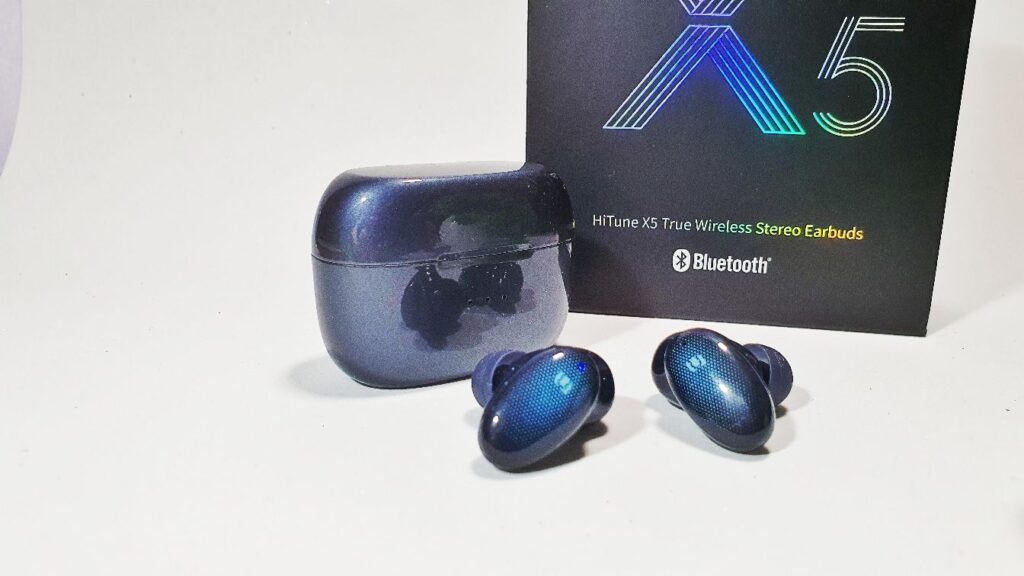 Tapping four times on either earbud toggles between a normal and 70ms low latency Gaming mode. Holding either earbud’s control surface down for two seconds triggers either a voice assistant or to decline a phone call.

With four different sizes of earbuds, the UGREEN X5 review offers a higher chance to ensure a better fit for users, particularly those with smaller ear canals. In practice, I found the default pre-installed medium sized silicone eartips offering a great fit and which were sufficiently comfortable for hours of usage.

While there’s no way to tweak the equaliser settings, the default sound signature of our UGREEN X5 review sample is a pragmatic, fairly well balanced profile that’s ideal for mainstream listening and a variety of other tasks including movies and gaming.

Sound staging for the UGREEN X5 was good, with distinct left/right audio channels when tested with CODM and also with Pink Floyd’s eponymous ‘Time’. Mids and highs were also fairly well represented and bass was well handled with a restrained hand while letting the rest of the track breathe. Vocals were also handled well with Joanna Wang’s lustrously dulcet tones rendered due justice in several test tracks. 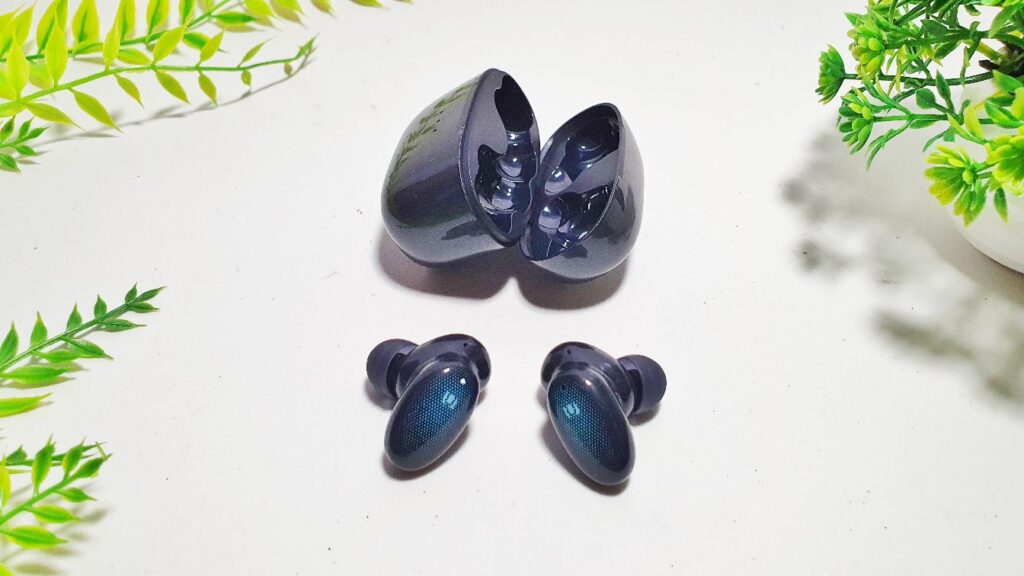 On paper, the provided 70ms low latency gaming mode is intended for gaming and movie watching duties. To its credit it offers a noticeable improvement with Low Latency Mode on when romping through the battlefields of CODM in terms of gunfire reports and audio feedback of incoming rounds versus leaving it off.

In terms of call quality, our UGREEN X5 review sample was able to handle it on both sides with deft aplomb. The mixture of ENC and CVC  with the UGREEN X5 helps to tamp down ambient noise by 91%, ensuring that voice calls are audible and relatively clear on the receiving end.

Even with a table fan rattling away in the background, my test voice call to a friend retained good voice clarity. This was ramped up to a recorded white noise video with a looped background of a coffee shop and it managed to squelch most of it competently. Overall voice call quality is sufficient for calls but understandably not for serious creative work.

On paper, UGREEN quotes that a full charge lasts for 7 hours of usage with a full recharge cycle requiring 2 hours of juicing. Our UGREEN X5 review sample had endurance matching the quoted duration with six plus hours of use at about 60% volume and constant usage paired with a laptop before it needed a top up in the charging case.

In theory, the case offers four full charges for a respectable 28 hours of playback in total. This is considered pretty respectable as earbuds go and slightly above average for endurance.

Should you buy the UGREEN HiTune X5 true wireless earbuds?

The UGREEN X5 true wireless earbuds offer good bang for the buck. For RM209, you’re getting decent, balanced sound and good battery life along with a competently executed low latency mode for movies and gaming. 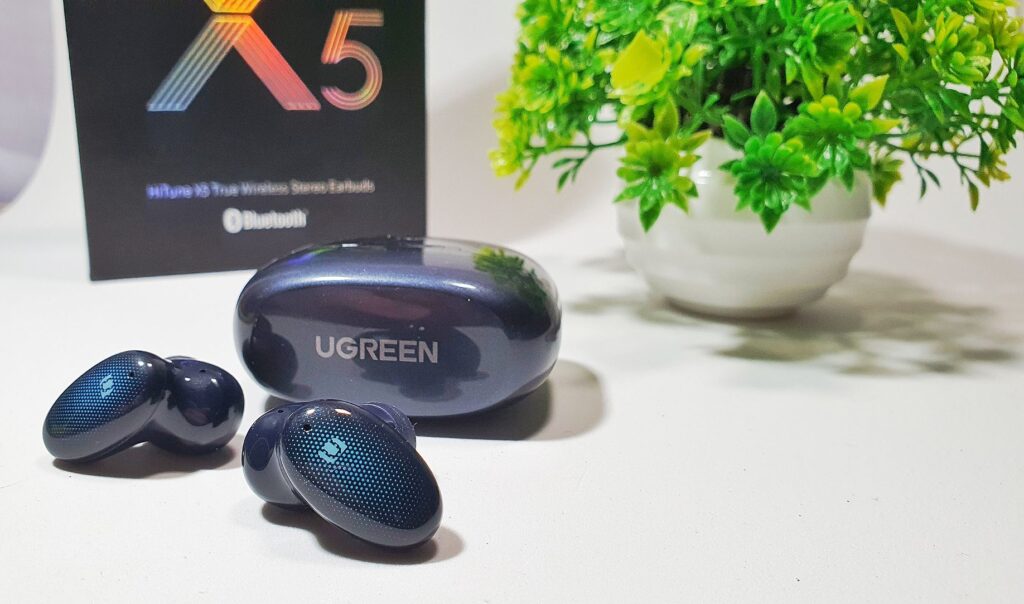 The UGREEN HiTune X5 is a sound choice, pun aside, for what you pay for with decently balanced sound, comfort and above average battery life.

Fairly comfortable for extended use