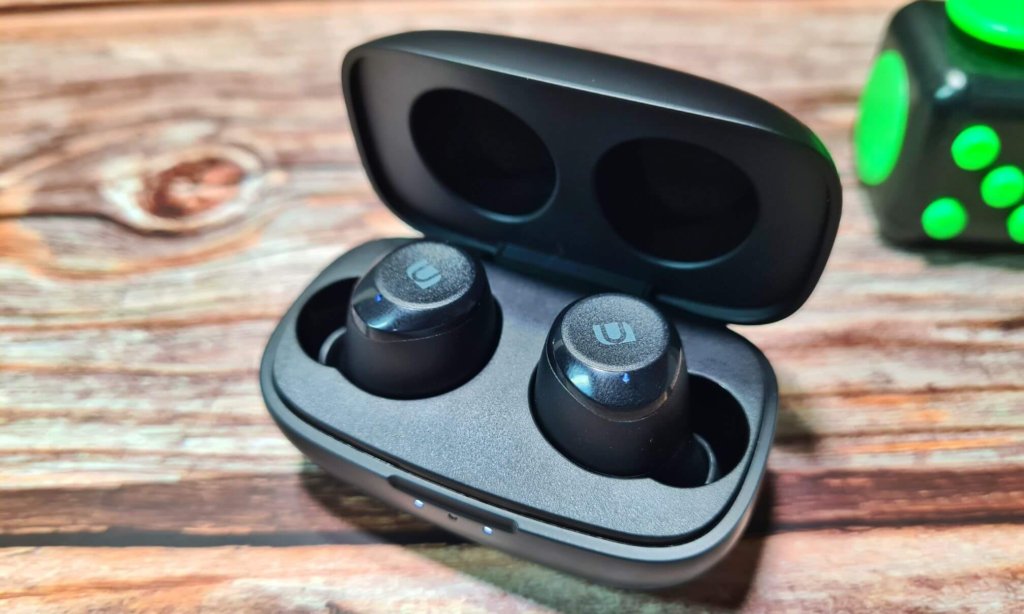 With 3.5mm audio jacks going the way of the dodo as time and tech inevitably march on, it’s becoming less of a want and more of a need to get a decent pair of wireless earbuds. If you’re picking from a top-shelf brand, you’re likely looking at a good half a grand and up but peripheral provider UGREEN’s latest offering, the HiTune WS100 True Wireless Stereo Earbuds aims to buck the trend as it’s just RM146 while offering much of the functionality, and we dare say, good looks of its pricier competitors. 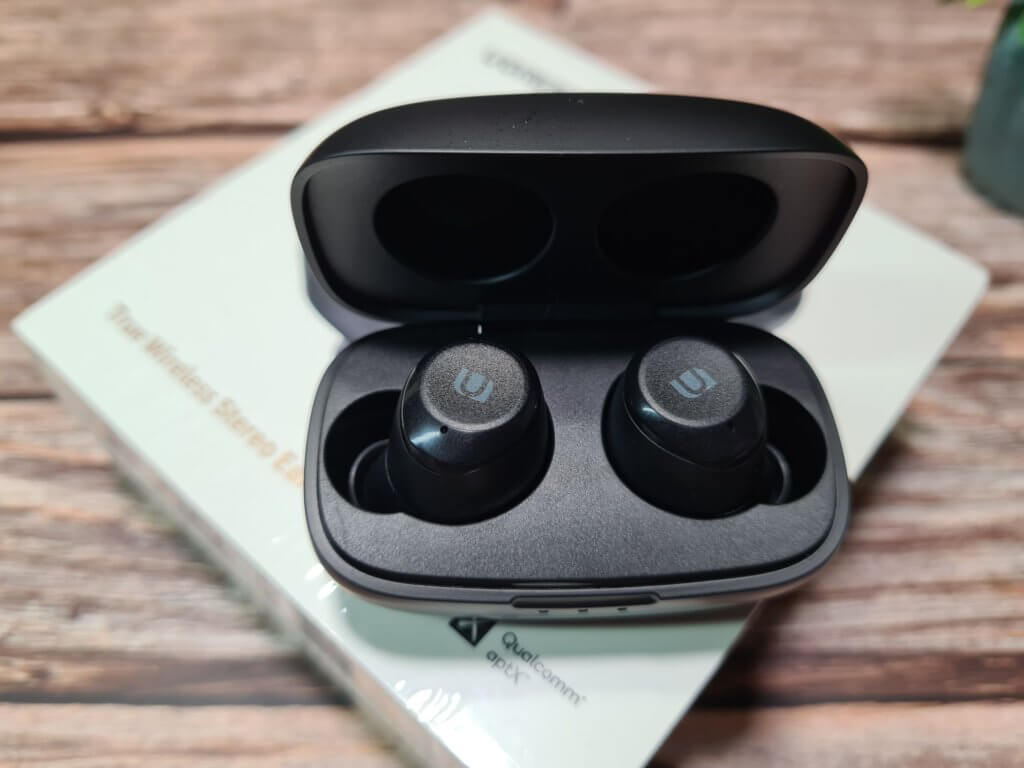 The UGREEN HiTune WS100 True Wireless Stereo Earbuds comes in a compact cardboard box which holds the earbuds, a charging case, a quick start guide, a USB Type-C charging cable and two additional pairs of differently sized ear tips in order to offer a better fit. A medium sized set of ear tips are preinstalled on the ear buds with a smaller and larger sized thrown in just in case you have differently sized ears. Seeing as this is intended for casual use, it doesn’t ship with ear wings to further secure it when you’re doing something strenuous like working out. 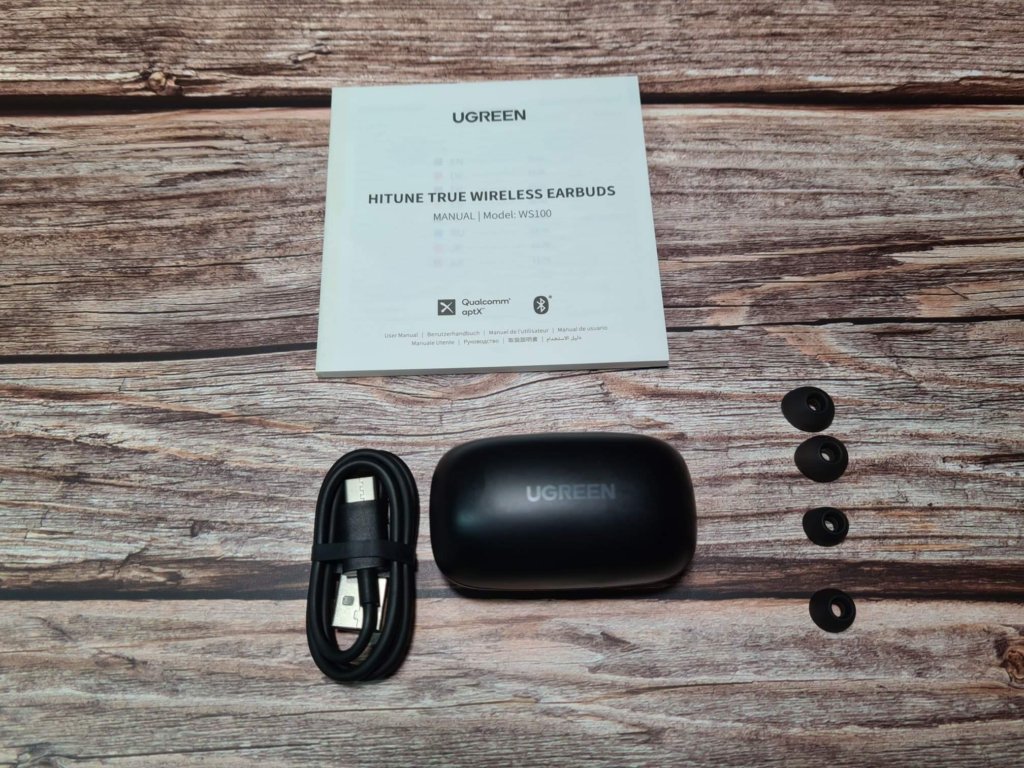 There’s enough here to cover the essentials and immediately start using it out of the box though it would be nice in future if they bundle future earbuds with a free casing for the charging case to protect it in the long term from nicks and scratches.
When we got our test sample, UGREEN bundled a free felt drawstring bag with it as a free gift so you can use it in this role in lieu of a free casing though this may be a seasonal or regional offering but last we checked, the offer is still available for their official online store on Shopee.

The UGREEN HiTune WS100 True Wireless Stereo Earbuds sport a matte black finish on both the earbuds, ear tips and the charging case itself with the UGREEN logo subtly monogrammed on the top lid in faded gray. Unlike the elongated, flat casing of the earlier WS102, the WS100 True Wireless Stereo earbuds have a higher, more rounded charging case with more pronounced curves on the edges which make it reasonably pocketable.

One pleasant thing to note is that the hinge mechanism is built in a sturdier fashion than its sibling the WS102 that we tested a while back with quite a bit of resistance to ensure it doesn’t randomly pop open in your pocket by accident. 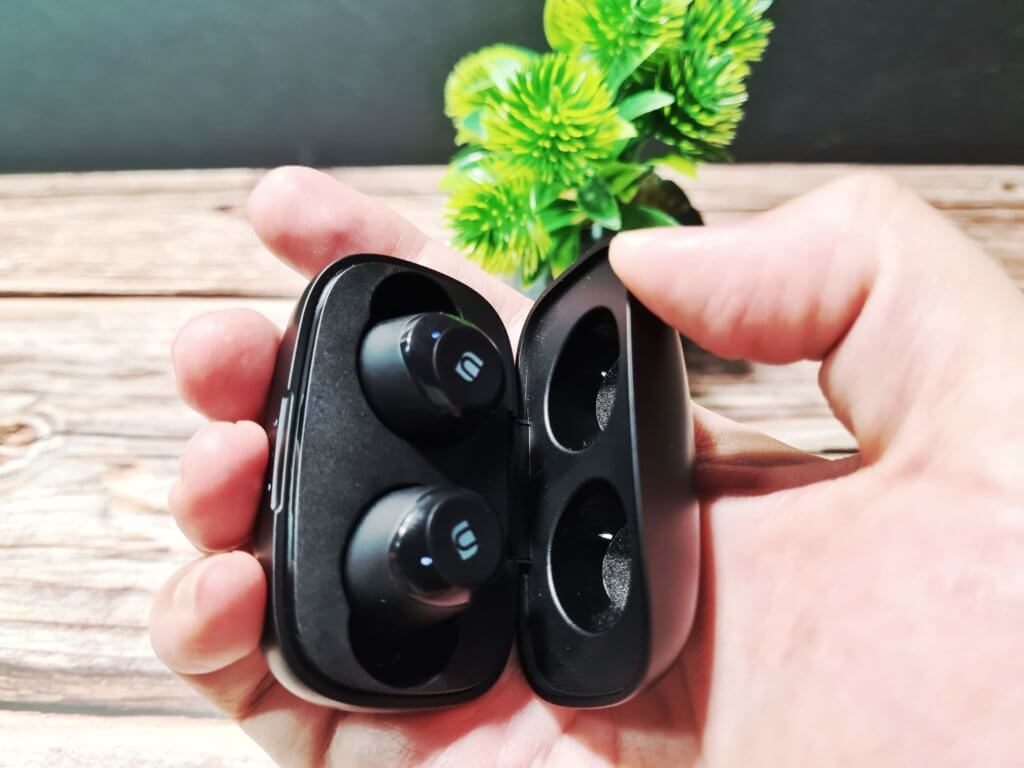 Fortunately, the high-topped, curved nature of the design makes this opening move a lot easier. The front of the charging case has a series of white LED indicator lights to show remaining battery life while the rear has a USB Type-C charging port.

Like other wireless devices of its ilk, the WS100’s earbuds are magnetically secured to the charging case and won’t fall out without deliberate intervention. Removing them out of the charging case revealed a somewhat standardised design with the drivers and battery crammed into an external housing that has a set of touch controls on the left and right emblazoned with the UGREEN logo. 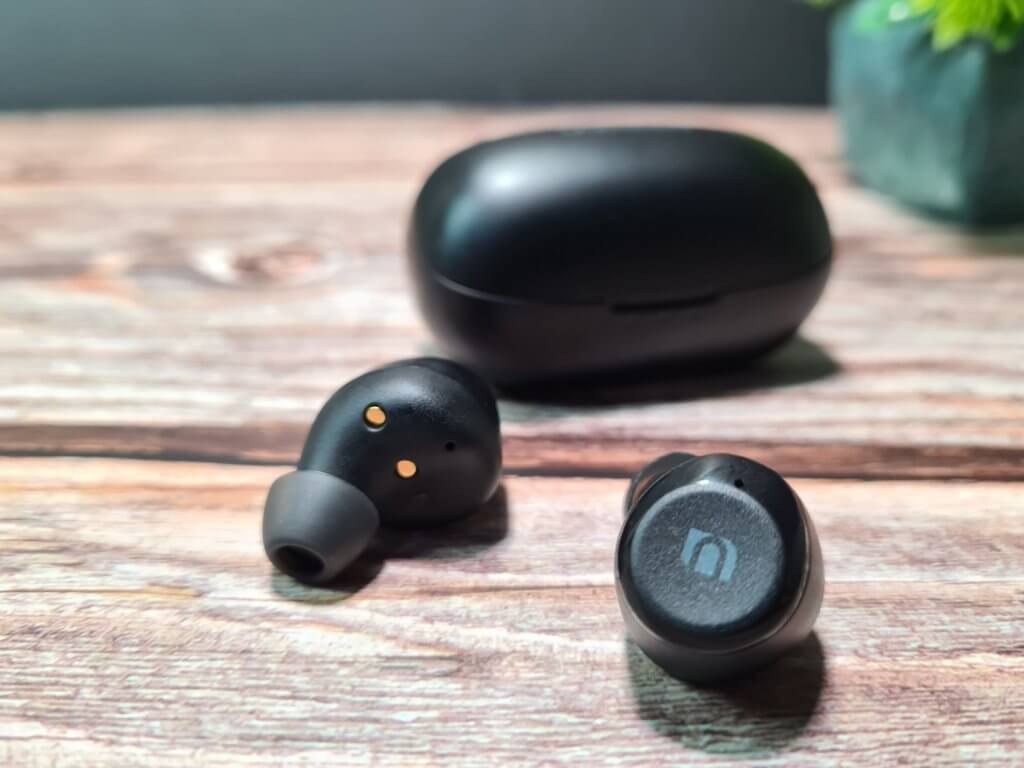 These touch controls cover the basis by letting you take and cancel calls and control playback with one oversight – you can’t actually control the volume and you’ll have to do so by interacting with your smartphone or paired device.

According to the official literature, both the charging case and the ear buds are rated for IPX5 which means they’ll survive a bit of a splash or sweat which makes them usable in more sedate workout scenarios and they’ll survive a shower of rain but they aren’t going to survive a monsoon or a dip in the pool.

In terms of overall build quality, the UGREEN HiTune WS100 True Wireless Stereo look and feel surprisingly sturdy with nary a hint of the typical corner-cutting plasticky feel you’d expect from lesser earbuds.

Getting them up and running out of the box is an elementary task and there’s enough of a charge in the earbuds and case itself to get started immediately though it’s best you plonk it down and fully charge it first.

When donning it for the first time, it’s worth ensuring that you get a proper seal on your silicone ear buds in order to offer a measure of passive noise insulation and comfort during extended use. Fortunately, the default medium sized earbuds worked just fine. 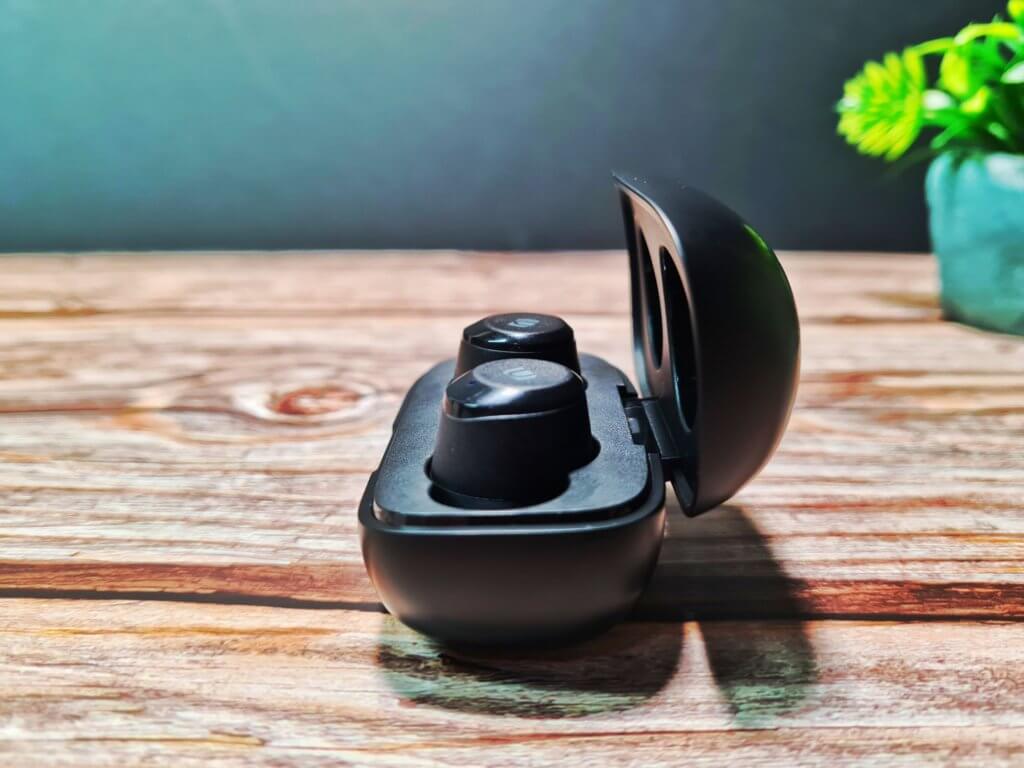 On our first try pairing it with our laptop via Bluetooth, we inadvertently discovered it only played sound out of one earbud. This was remedied by resetting the connection, plonking both earbuds back into its charging case and trying again. It worked without issue on our Galaxy Note10 and a smattering of other different branded Android phones.

Navigating the touch controls is fairly straightforward though it lacks volume controls. A single tap on either earbud lets you play/pause a track or to take/end a call. A fast double tap moves on to the next track while a triple tap goes back to the previous track. Long pressing for two seconds in the middle of an incoming call cancels said call or brings up your default virtual assistant. The lack of volume controls is irksome but it’s not a major deal breaker.

One particularly useful unlisted feature is that you can use the erabuds individually if you’re trying to eke out more battery life seeing as the controls are mirrored on either earbud so you can theoretically double your usage time if you’re willing to forgo a stereo effect. 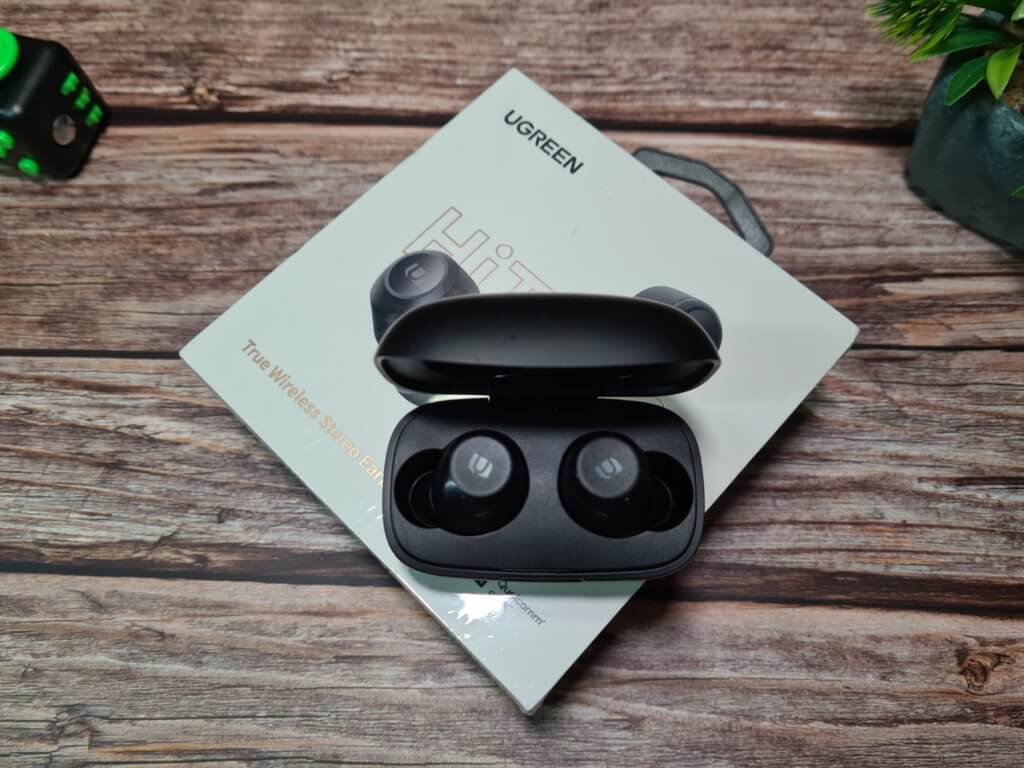 When put to the test, the UGREEN HiTune WS100 True Wireless Stereo earbuds did pleasantly well with a variety of tracks. With its 5.8mm neodymium drivers, the earbuds delivered pretty good bass and decent sound staging with the ability to tackle most contemporary music in a competent fashion though more subtle tracks and classic music aren’t its ambit.

It handled Journey’s classic track Don’t Stop Believin’ well with good separation between the vocals and accompaniment. Belinda Carlisle’s classic ‘Leave a Light On For Me’ and its bass opening with her classic vocals had a fair balance without the former being drowned out by the latter. Pink Floyd’s ‘Time’ was handled surprisingly well, especially with the opening track and its intricate sound staging as alarms fire off to the left and right. Much subtler tracks like Vaughan Willian’s ‘The Lark Ascending’ seemed somewhat lackluster though with a muted feel to the orchestral arrangement. In the midrange, the HiTune WS100 handles itself very well though extreme highs and lows elude it but at this price point, we’re not quibbling.

Call quality was good on both sides of the divide though ambient noise is an issue with the lack of active noise cancellation so you’ll have to make your calls in a fairly quiet place for best effect.

On paper, UGREEN claims that the WS100 True Wireless Stereo earbuds are able to last 9 hours on a single charge with an additional two in the case for a trand total of 27 hours of usage.

We primarily used it for listening to tunes paired up with our smartphone and Spotify as well as our own offline track list at an average volume level and managed to last close to the advertised limit at 8 hours and 55 minutes.

The additional charging case got us another 20 hours of usage. When drained to dead zero, the WS100 took a full two hours and 15 minutes to recharge via the USB Type-C port in the base. It lacks any fast charging but it’s understandable at this price range.

For what you pay for the UGREEN HiTune WS100 True Wireless Stereo represents excellent value as a general purpose affordable pair of earbuds. If you can overlook the lack of volume controls and lack of active noise cancellation – which aren’t issues at this price point in any case – you have a well built, decent performer with good battery life.