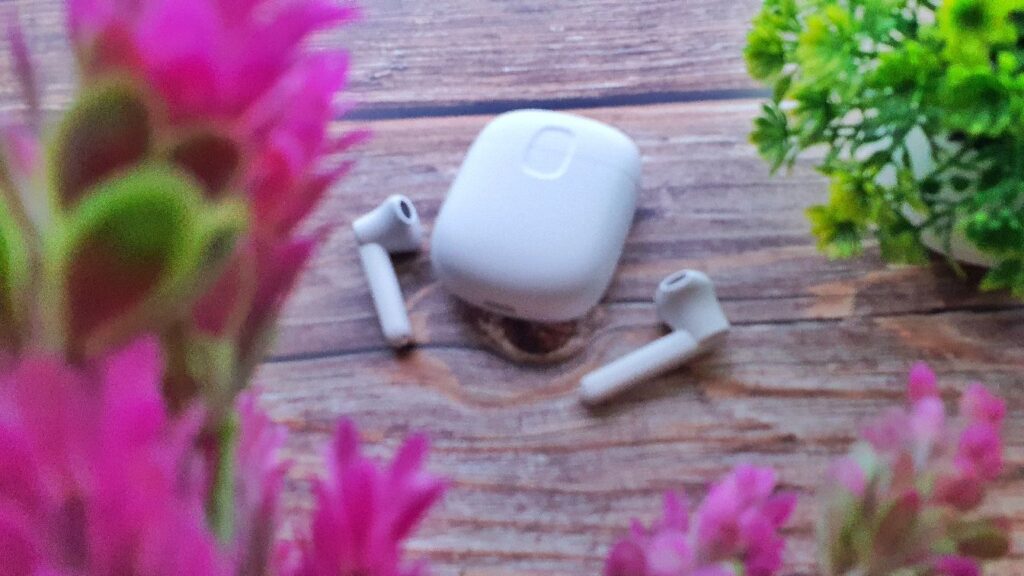 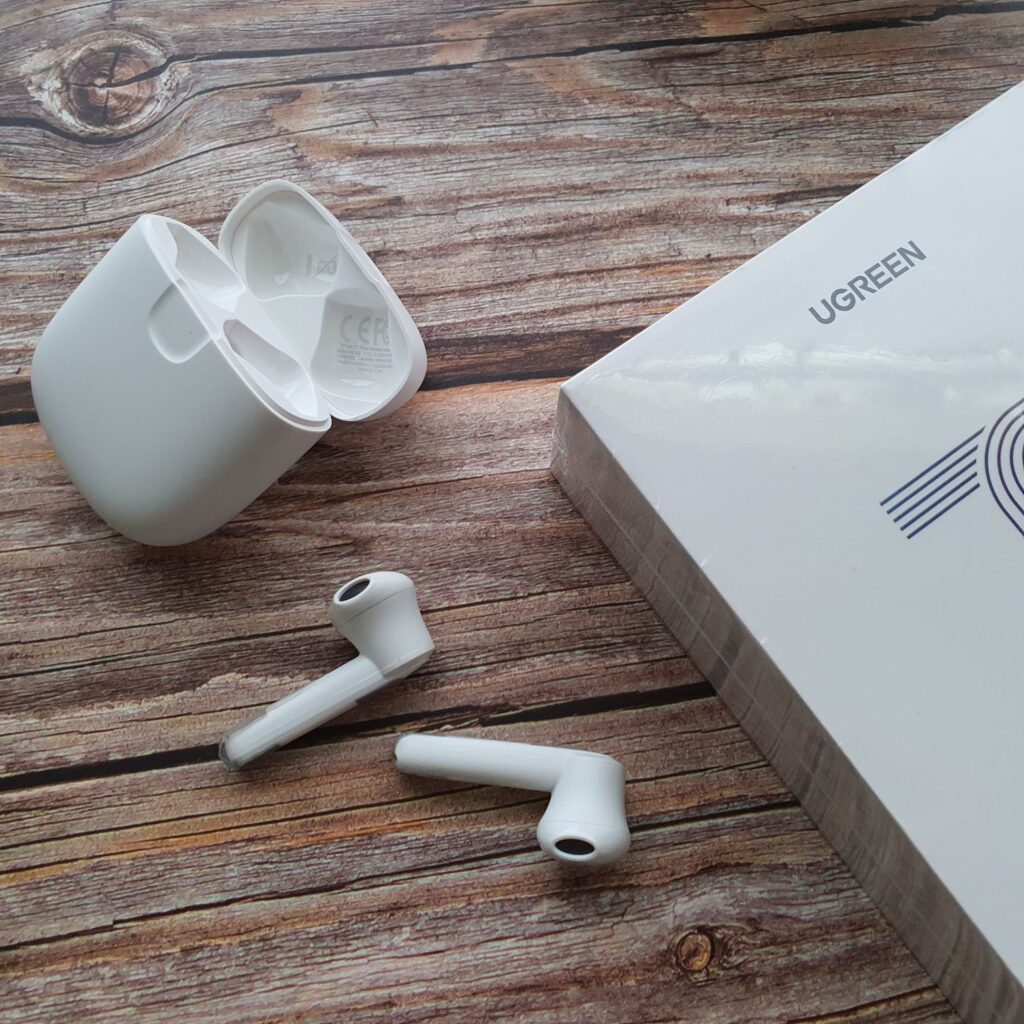 The UGREEN HiTune T2 True Wireless earbuds come with the essentials in a stylish cardboard box. Pop it open and you get the following items: 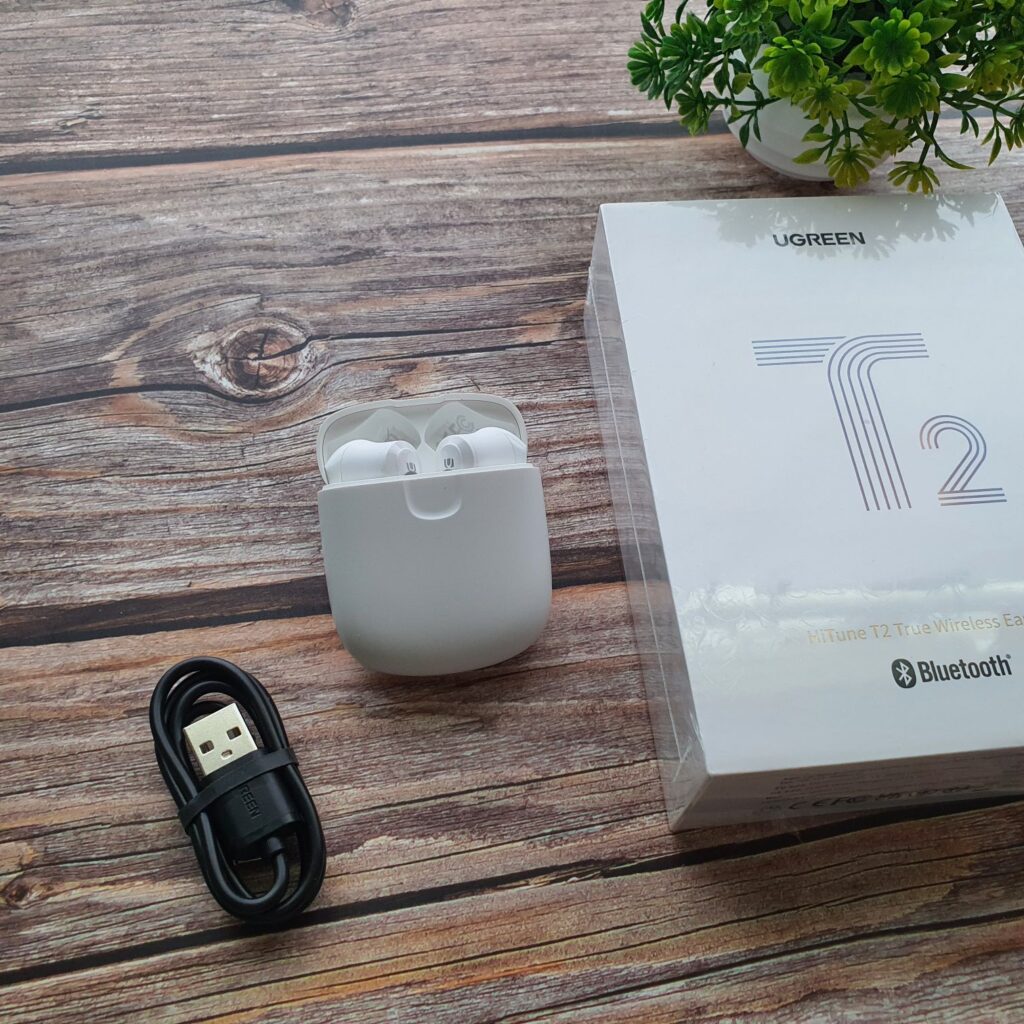 In terms of colour choices, the UGREEN HiTune T2 True Wireless earbuds are available in your choice of four paint jobs –  pink, blue, black and white. Our test unit came in white, has a grippy, matte finish that repels fingerprints nicely and also makes it easy to hold one-handed without it slipping out of your grasp.

The charging case proved to be sturdy without feeling plasticky which belies the fact that it’s made primarily of polycarbonate. Unlike prior examples which had bulbous lozenge shapes or tall, treasure chest shaped form factors, the UGREEN HiTune T2 True Wireless has a flat, squarish design akin to a dental floss case that makes it very pocketable indeed. 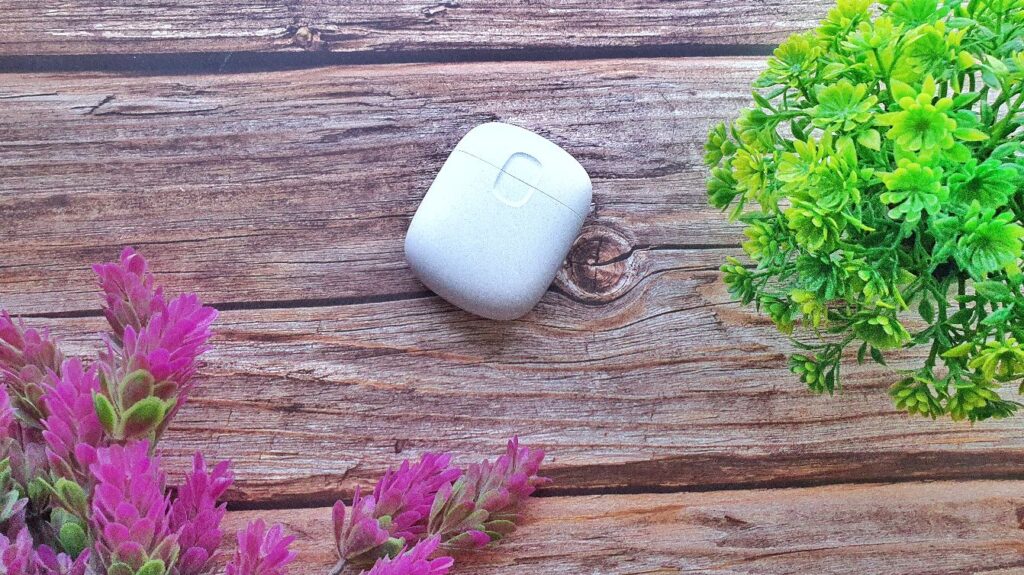 The opening mechanism is smooth and light, with a slight recess in the front of the case to ensure easy one-handed opening. The base of the charging case also features a USB-C port for charging duties and it also has Qi-wireless charging support too which is somewhat of a rarity at this price point.

The back of the case has a reset button just below the hinge while the front has an LED indicator that lets you check remaining power in the case.

The earbuds are done up in a style akin to Apple’s Airpods Pro with a toothbrush-shaped form factor that dangles out from the ear. Much like Apple’s popular AirPods, the earbuds rely on a bulbous housing to remain secure in the outer part of the ear and lacks silicone ear tips for passive noise insulation. The ‘handle’ portion houses a microphone along with a set of pogo pins for charging.

Where the ‘handle’ meets the earpiece, they’ve emblazoned a small UGREEN logo to indicate where its touch sensitive surface is though it’s rather small.

One pleasant bonus with the earpieces is that they’re rated IPX5 which means that they’re able to survive a splash or two of water and sweat though they’re not meant for you to take to the pool. This protection does not extend to the case though so some care needs to be taken to protect it from the elements. 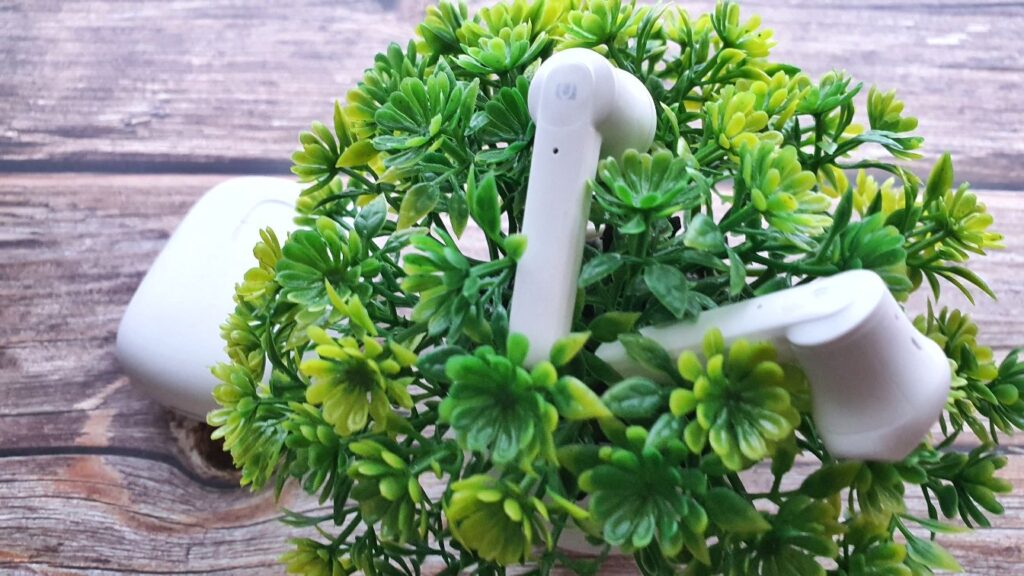 Overall, the UGREEN HiTune T2 True Wireless looks posher and is built to a higher standard than what its price tag would indicate.

In terms of the hardware running under the hood, UGREEN has certainly kitted it out in a substantial fashion, more so for the fact that it’s a mere RM139.

For the price of entry, you’re getting 14.2mm PU-coated titanium dynamic drivers in each earpiece with two microphones per earpiece for a total of four to achieve what UGREEN calls electronic noise cancellation (ENC) to mute out external wind noise and ensure clearer vocals during voice calls.

ENC is automatically enabled by default and there’s no way to turn it off. One thing to be clear is that this isn’t active noise cancellation where mikes generate an anti-sound wave to cancel out noise and it primarily works to clean up call quality and squelch background noise primarily when making voice calls.

In terms of size, the UGREEN HiTune T2 certainly has larger drivers with it packing generously sized 14.2mm PU-coated titanium dynamic drivers versus what is typically mounted in wireless earbuds of this size and price range.

On average, UGREEN has quoted that a full charge on the earbuds lasts 4 hours of usage with 20 hours in total inclusive of the charging case, which is about 3 additional recharge cycles. 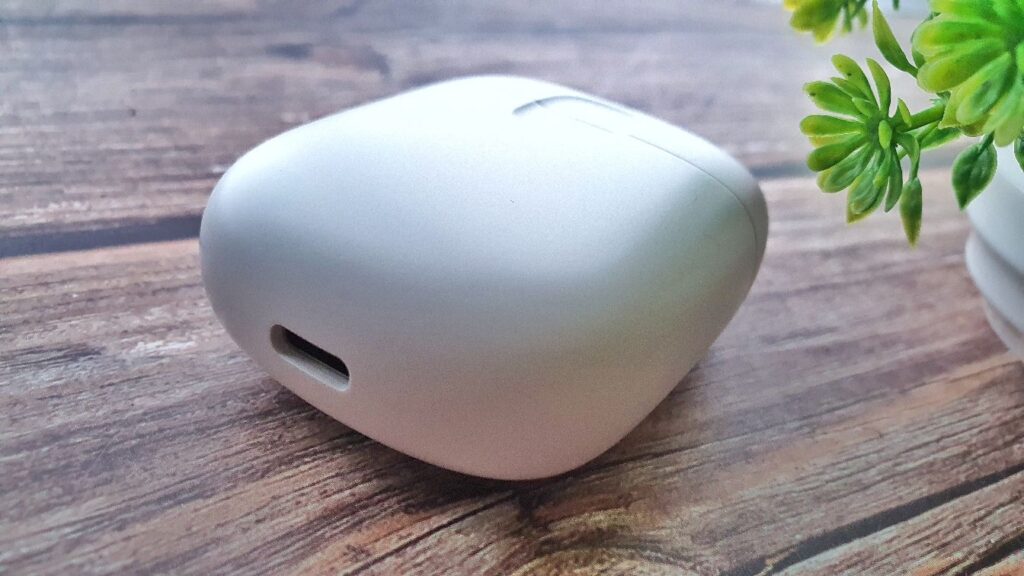 The earbuds notably have a hardwired Gaming setting that cuts latency down to 60ms which is especially critical during gaming while also introducing enhanced directional audio especially for FPS shooters like Fortnite and Call of Duty Mobile.

Beyond normal and Gaming mode, the earbuds don’t sport any other unique modes nor does it have a paired app or a means to tweak equaliser settings but that isn’t a major quibble at this price point.

Getting the UGREEN HiTune T2 True Wireless set up and paired was a relatively simple task. Once you flip the lid of the case open, it attempts to find the nearest item to pair with which in our case was a Galaxy S21 Ultra. It paired up in a matter of seconds via Bluetooth. We also tested it with a Windows 10 laptop and it recognised it and paired up in an equally short amount of time.

From there on in, you’ll have to be reliant on a third party music or streaming app for track playback and your phone or laptop audio controls to tweak volume level. UGREEN provides no special apps to customise any additional settings on the UGREEN HiTune T2 True Wireless and the controls are permanently hardwired into the earbuds.

Some controls are mirrored on both earbuds but some are specific to each earbud. You can tap once on either one to play or pause a track. For more complicated settings, you tap thrice on the right one to move forward one track while doing the same thing on the left earbud moves back one track.
Double tapping on the right earbud increases volume while the left decreases volume. To enable equaliser mode, you have to tap either earbud rapidly four times in a row.

The responsiveness of the touch controls were fair but there were a few misfires when it comes to controlling volume as I often ended up tapping either too slow or too fast and inadvertently stopped a track that was playing. Hopefully in future iterations, UGREEN has a means via an app or other setting to tweak or modify the input speed for the controls.

One interesting feature to note is that the earbuds can be used separately in mono mode to eke out longer battery life.

Connectivity was excellent and steady even when we stepped ten paces away from our phone and laptop. Even when worn for its maximum duration before it ran out of juice, which is about 4 hours, the earbuds proved to be rather comfortable. Best of all, they were secure enough that they remained lodged in my ears even after testing it several times with multiple vigorous jumping jacks.

In normal mode, the earbuds were able to punch above its weight class with sound quality that exceeds other prior offerings from UGREEN that we’ve tested like the HiTune WS100 and older True Wireless WS102, with deeper, richer sound and beefier bass. 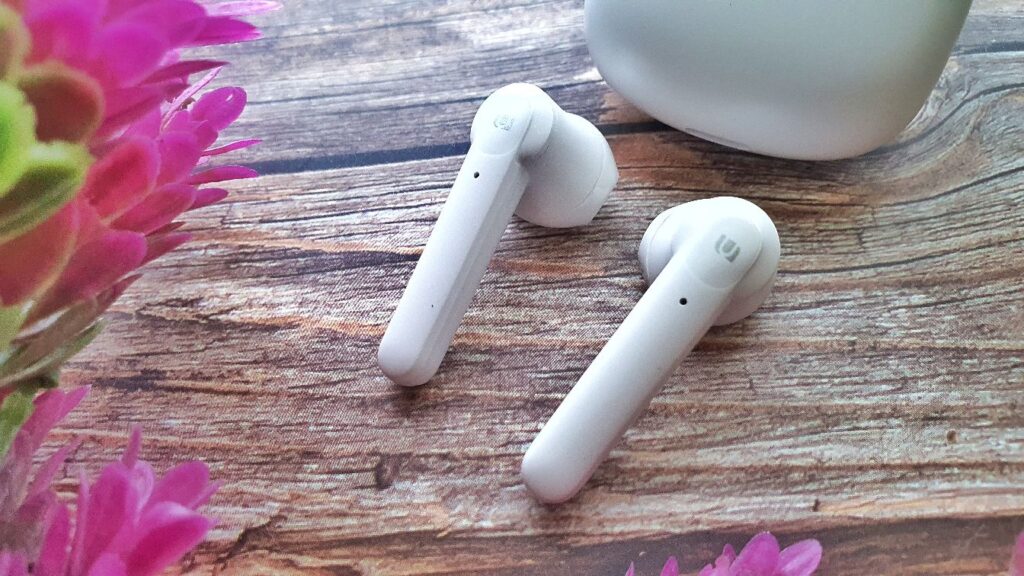 When put to the test in normal mode, the UGREEN HiTune T2 True Wireless was able to handle most contemporary music tracks with a fair amount of clarity and decent bass though sound staging felt a bit narrow. This is most evident in Pink Floyd’s ‘Time’ with its distinctive opening track of ticking timepieces which sounded a bit flat. Even so, it’s still a significant improvement over other older, tested UGREEN earbuds.

I also tested it in its gaming mode in Call of Duty Mobile and did enjoy a modest improvement in its sound staging especially when discerning incoming ordnance and where hostiles were prancing around on the map. Granted, its performance isn’t as clear and distinct as much pricier wireless  earbuds but the fact that it’s able to achieve so much for what you pay for is like comparing a lizard to a T-Rex.

While it wasn’t immediately perceptible at first, I did gradually notice a subtle but slight delay in what is heard and what is seen on screen when gaming. This Is readily apparent when you’re firing rounds downrange in CODM as the sound appears slightly after a round leaves the barrel in normal mode though this sound vs animation discrepancy was dealt with satisfyingly in gaming mode with the sound of firing matching the animations..

In our UGREEN HiTune T2 True Wireless review, we found that its ENC works as advertised.  The provided ENC was able to offer call quality among the best in its price range with the receiving side barely being able to make out that I was even making a call from a coffee shop.

Battery life on the UGREEN HiTune T2 True Wireless closely followed its quoted limits with a full charge lasting a good 4 hours of usage. It’s not the worst we’ve tested but it’s rather middling as wireless earbuds go. Fortunately, charging it was relatively fast with a drained case being fully juiced in slightly over an hour and a half.

In a work from home scenario where battery life isn’t a major factor, I found its swift pairing and good voice quality making it useful for Zoom calls and online press conferences along with indulging in the odd Netflix binge or two. It also worked well for short forays. In a pre pandemic world, it’d be fantastic for the daily commute.

Is the UGREEN HiTune T2 True Wireless worth buying?

The UGREEN HiTune T2 True Wireless are one of the best wireless earbuds in its price range and well worth what you pay for with improvements over its older predecessors in meaningful ways. You get larger, richer sound, the swift pairing, good call quality and an improved low latency gaming mode that works. Unfortunately, this is tempered with average battery life and a lack of an equaliser mode but these are decidedly minor quibbles, especially seeing its modest price point. 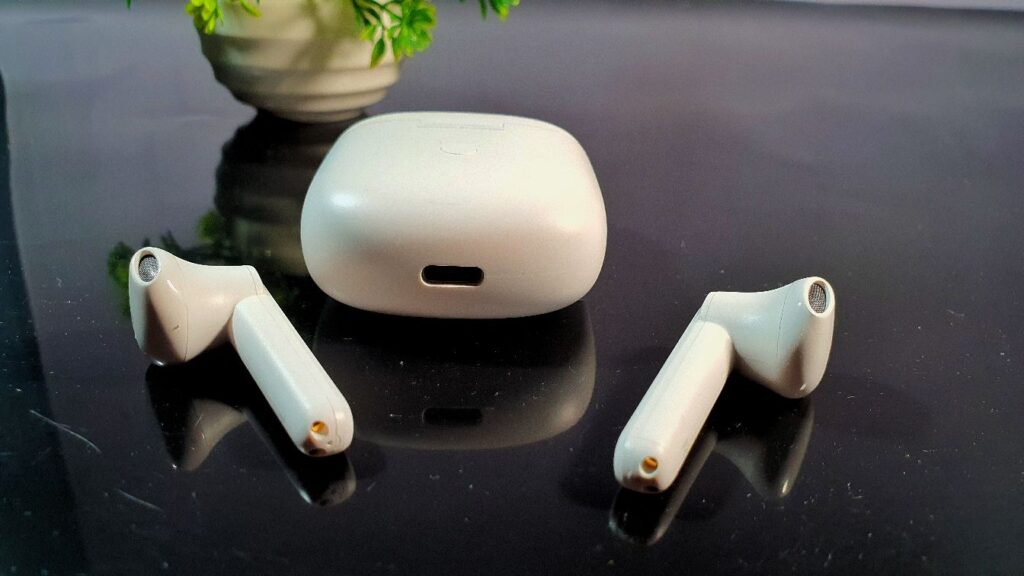 Review unit courtesy of UGREEN. Available for purchase online at Shopee and Lazada.

Malaysian Users can purchase the UGREEN HiTune T2 with special Voucher Code as below :

The UGREEN HiTune T2 True Wireless earbuds are well worth what you pay for with improvements over its older predecessors in meaningful ways. You get larger, richer sound, swift pairing, wireless charging, good call quality and an effective low latency gaming mode. Unfortunately, this is tempered with average battery life and the lack of an equaliser mode but these are decidedly minor quibbles, especially seeing its modest price point.

No passive noise insulation in earbuds