While telco provider U Mobile is best known for their distinctive bright orange hue and their rather affordable phone plans, they’ve now taken things up a notch with an absolutely bananas rewards campaign for both prepaid and postpaid customers called TERER THURSDAY.

Essentially, every Thursday, customers will get a series of free deals, starting today. For the first TERER THURSDAY, you can enjoy a free Chatime drink worth up to RM6.50. According to U Mobile, subsequent TERER THURSDAYS will see treats from Krispy Kreme, Golden Screen Cinemas (GSC), 7-11, Starbucks, OLDTOWN White Coffee, Kenny Rogers and more hopping onto the bandwagon for a year. To get in on the gravy train of freebie goodness, you’ll need to be a prepaid or postpaid U Mobile customer and get the MyUMobile app downloaded. Once that’s done, you’re all set.

On that note, U Mobile is also offering a Christmas Rewards Campaign where they’ll be doling out deals and treats galore for a dozen days leading up to Christmas including iPhones and more. For more details on TERER THURSDAY, swing by www.u.com.my/rewards/TERER-THURSDAY. 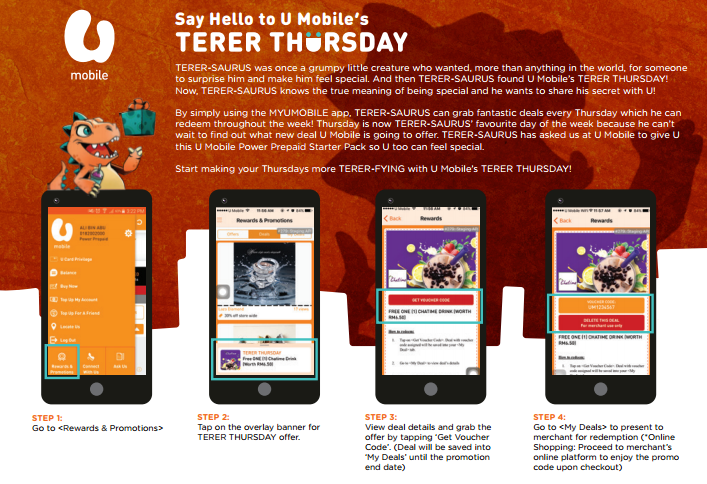