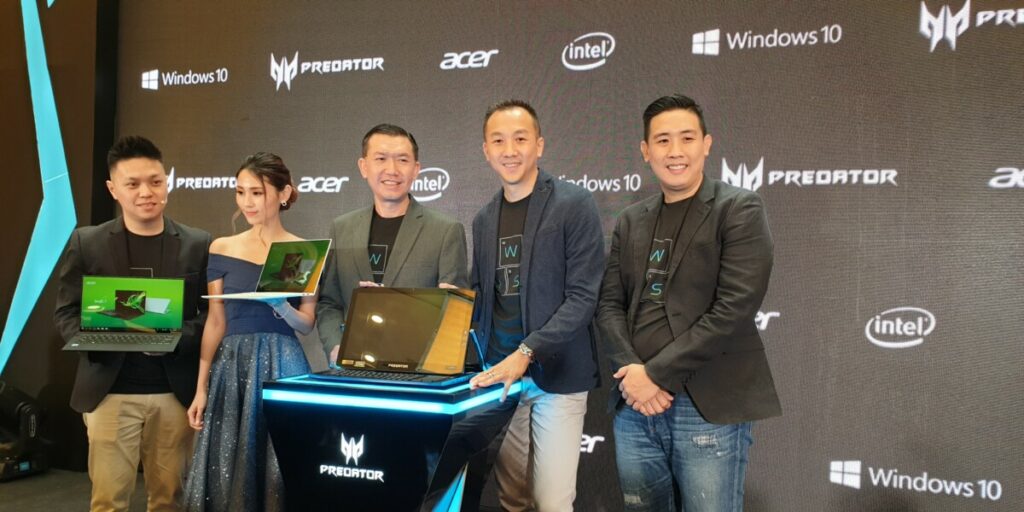 Acer Malaysia is aiming to take the gaming industry by storm as they’ve debuted a slew of their latest Predator gaming notebooks and desktops though their largest and most powerful rig, the Predator Triton 900 took centre stage as it comes with a radical design that arguably makes it a full-fledged gaming convertible that can change into any of four different modes on demand.

Also launched alongside the Predator Triton 900 are refreshed variants of their popular Predator Helios 300 gaming notebook, the Nitro 5 and Nitro 7 gaming notebooks as well as a last minute surprise in the form of the Swift 7 ultraportable. All of the notebooks are available for immediate purchase though some subvariants will arrive in early August 2019.

The Acer Predator Triton 900 comes with what Acer calls an Ezel Aero Hinge that suspends the 17.3-inch 4K UHD IPS touchscreen display that allows it to prop itself up like a virtual easel for creatives, the usual notebook mode, a display mode and a stand mode if you’re aiming to share the display with your friends during a gaming session. The form factor is certainly novel indeed and pulling off requires precise tolerances, especially seeing the Triton 900’s unique Ezel Aero Hinges as the display was able to stay in position without it wobbling. 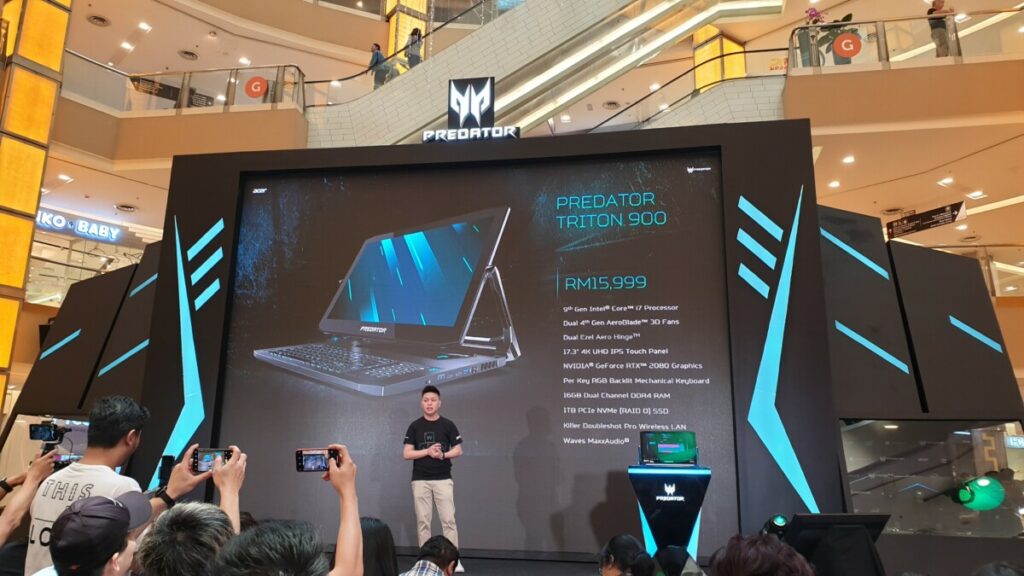 The rest of the hardware powering the Predator Triton 900 consists of the latest 9th gen Intel Core i7 processor, an NVIDIA GeForce RTX 2080 graphics card with 8GB GDDR6 VRAM, 16GB GDDR4 RAM upgradeable to 32GB via 2 SODIMM slots, a 1TB (2 x 512GB) PCie NVME SSD in RAID o configuration. Keeping all this hardware cool are a pair of 4th generation Aeroblade 3D cooling fans which offer enhanced cooling over its predecessors. Rounding things off are an individually RGB backlit mechanical keyboard. The price for this magnificence? A cool RM15,999 backed by a 2-year local on-site and Accidental Damage/Theft warranty policy. 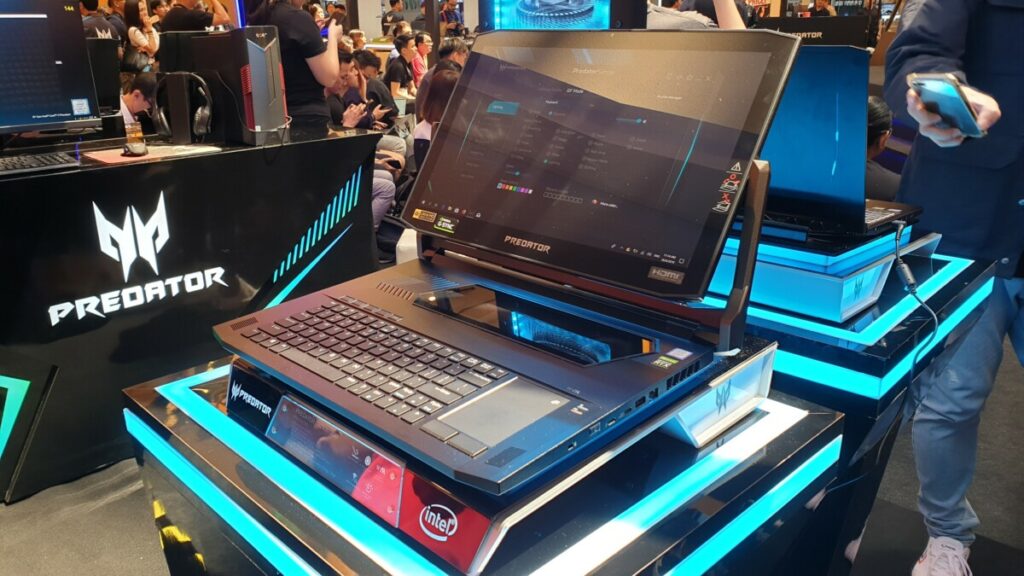 Acer’s reliable gaming workhorse range are the mainstay of many pro gamers and the 2019 refresh comes with their familiar matte black and electric blue RGB livery albeit with a slightly slimmer 22.9 chassis that’s 3.8mm thinner than its 2018 predecessors. 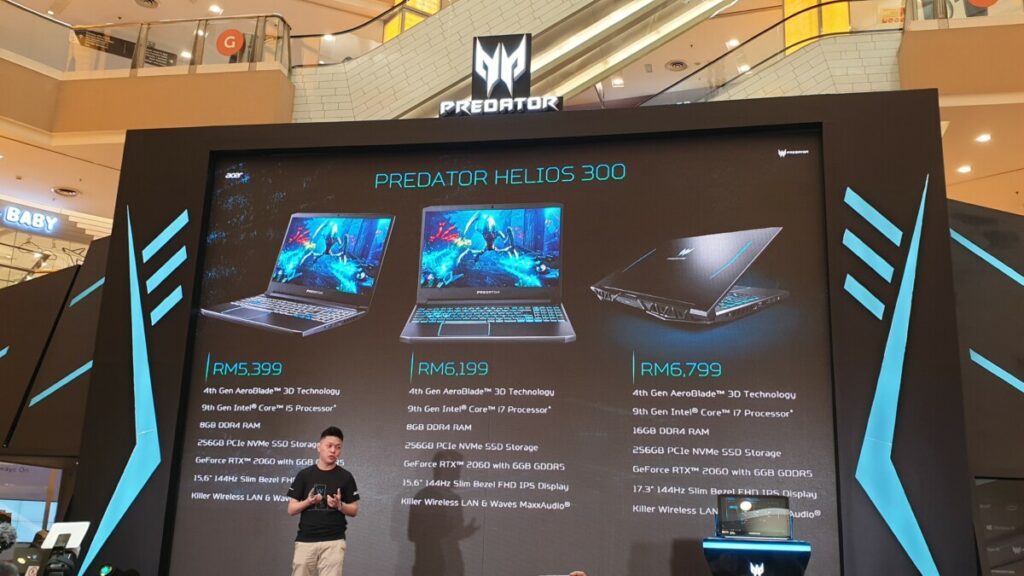 For 2019, the Predator Helios Triton 300 consists of 3 variants in a variety of configurations. The hardware consists of either a 17.3-inch 144Hz Full HD or 15.6-inch 144Hz Full HD IPS display with slimmer side bezels, a full sized 4-zone RGB backlit keyboard, up to the latest 9th generation Intel Core i7 processors, NVIDIA GeForce RTX 2060 GPUS, up to 16GB DDR4 RAM, up to a 256GB PCIe NVME SSD and their Waves Maxx Audio tuned speakers. 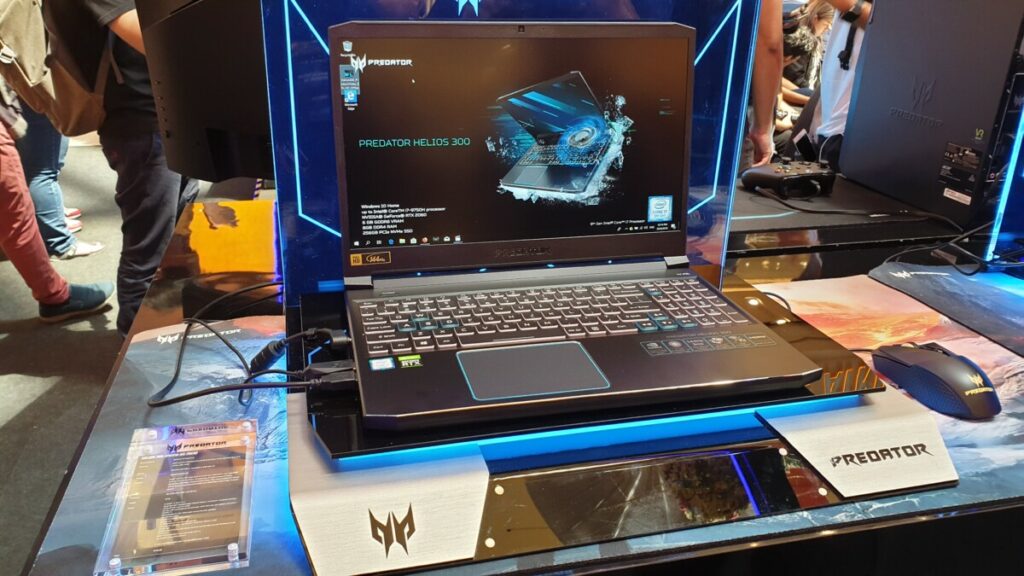 Acer’s Nitro series are intended for casual gamers and sport very agreeable prices and sufficiently powerful hardware for mainstream gaming. The refreshed Acer Nitro 5 and Nitro 7 all come with 144Hz displays, up to 9th Gen Intel Core i7 processors, up to an NVIDIA GeForce GTX1660Ti GPU, up to two M.2 PCIe SSD slots and up to two DDR4 RAM SODIMM slots for up to 32GB total RAM and Acer’s CoolBoost tech to keep temperatures manageable. 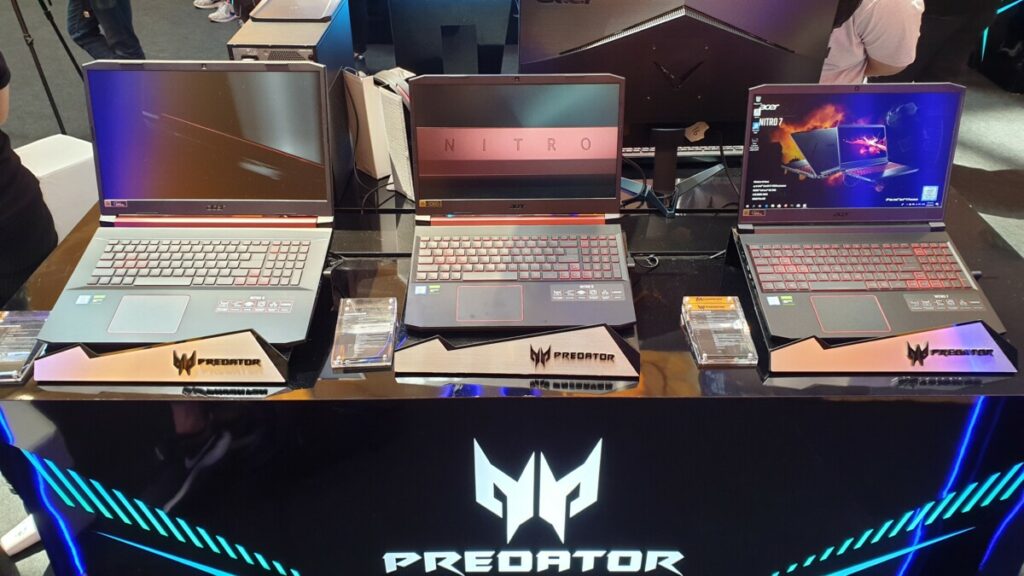 First seen at CES, the Acer Swift 7 is breathtakingly slim and svelte. The whole affair weighs just 890g, making it one of, if not the lightest 14-inch notebook of its kind in the market. The notebook itself is slimmer than a magazine and features enough hardware and endurance to get the job done for road warriors. 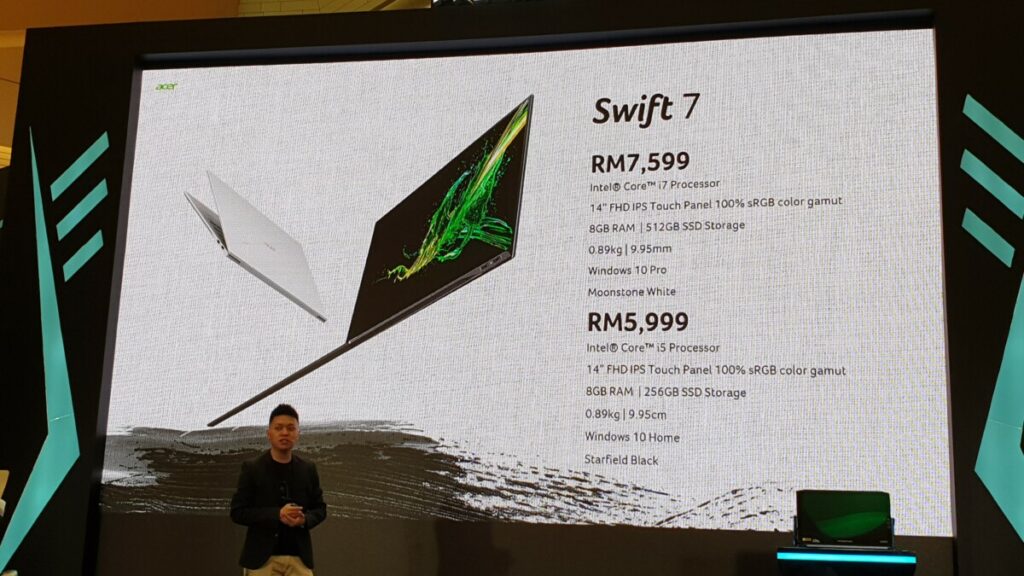 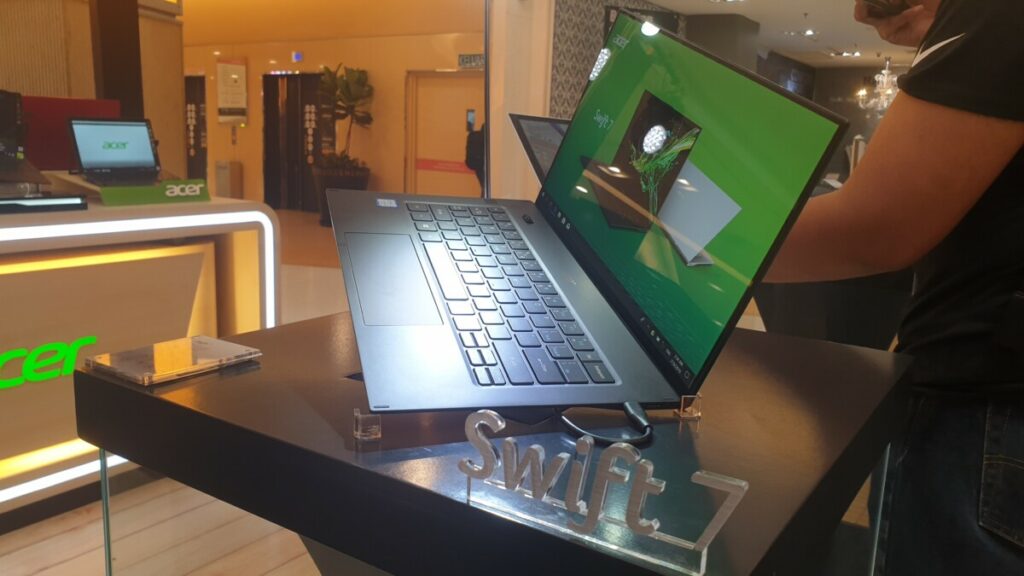 For a limited time only until 30 June 2019, you can experience all these slick offerings from Acer at the Orange Concourse at LG2 in Sunway Pyramid mall and get special offers such as free gaming monitors when you buy the new Helios 300 gaming notebooks, RM150 cashback when you buy any Intel Core i7 variant of the Nitro 5 and Nitro 7 and more. For more details swing by www.acer.com.my 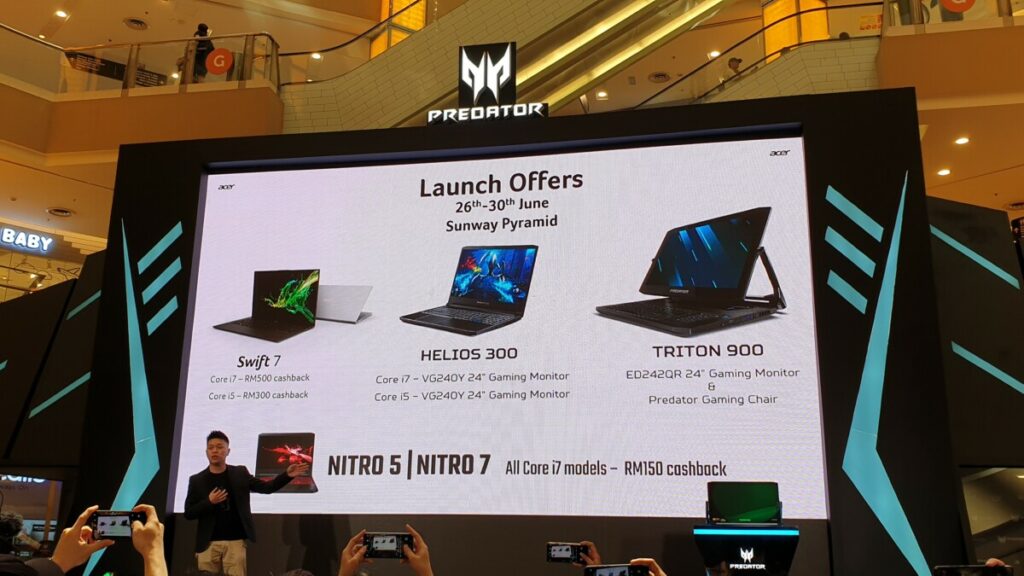