Teased and bandied about as well as hinted at via an inadvertent mention on the side of a retail box leak as well as a brief mention on an official Samsung website, the Galaxy Watch still managed to surprise when it made its debut at Unpacked 2018 as it brings to the table an enhanced array of features while looking the business with two sizes, enhanced battery life and quite a few other  interesting tricks up its polished metal chassis. 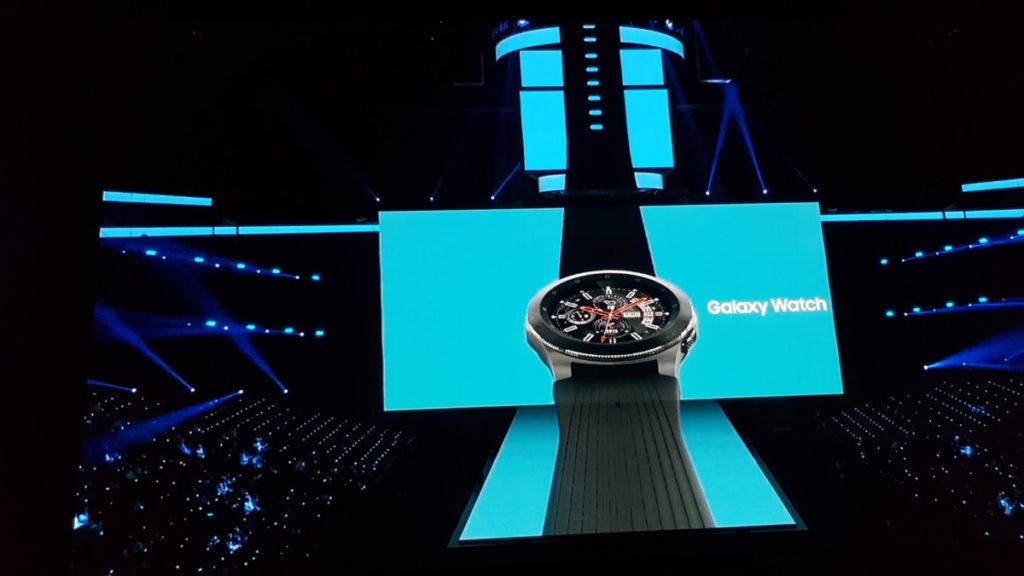 In terms of new features compared to its predecessors, the new Galaxy Watch now has an Always On display which means the touchscreen can stay on for much longer, offers a stress management tracker that suggests breathing exercises if you happen to get worked up, a beefed up sleep tracker that monitors REM cycles and suggests better sleeping habits and it is even able to walk you through host of built-in workouts, up to 39 in total, for users to stay fit wherever they are. 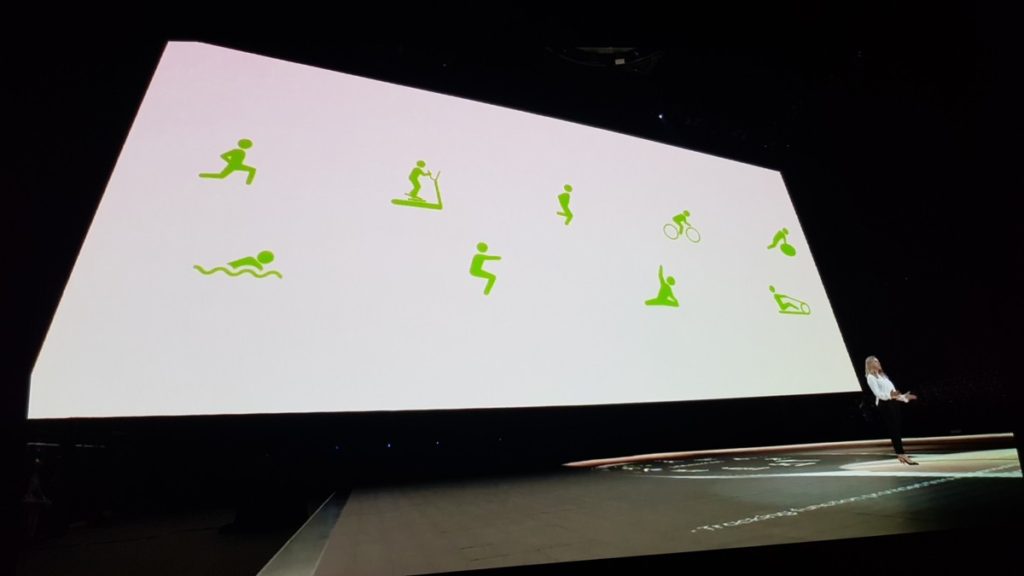 The Galaxy Watch also can take advantage of Bixby Vision via a paired up Galaxy Note9, S9 or S9+ to take snaps of your grub so you can log your calorie count. Where it really impresses is that the Galaxy Watch, via Samsung’s SmartThings protocol lets you control all manner of connected household switches and appliances and, assuming you have a Spotify Premium account, listen to some tunes too offline.

There’s more improvements under the hood of course but the biggest enhancement is that the Galaxy Watch will have a whopping 80 hours or so of battery life on average before needing a recharge by docking it into the bundled wireless dock or to the Samsung Wireless Duo Charger.

The Samsung Galaxy Watch up close 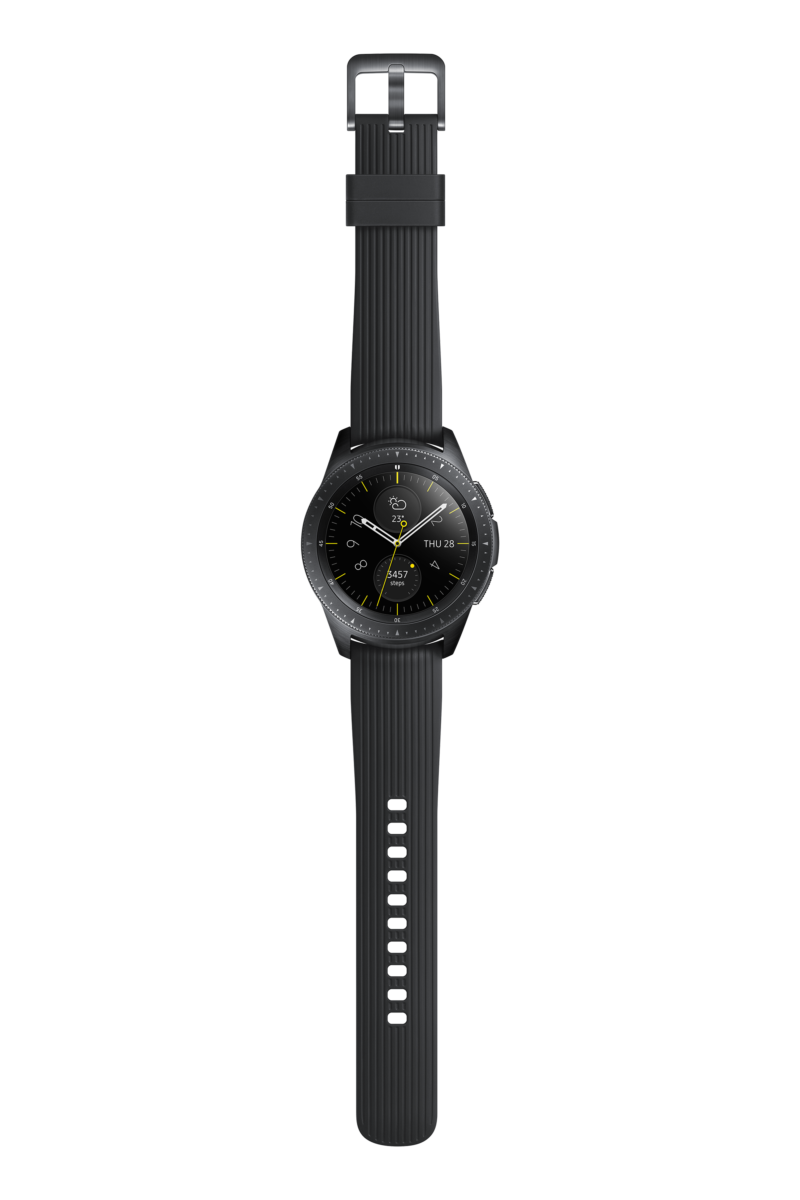 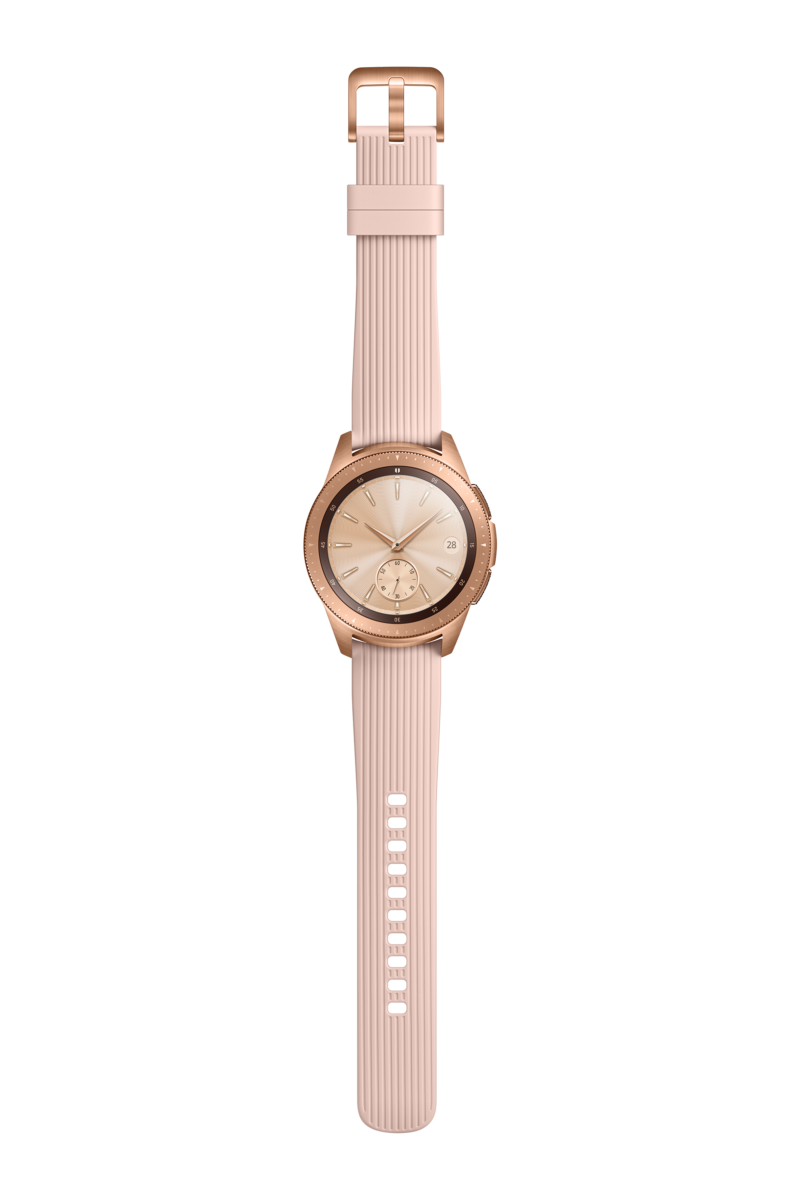 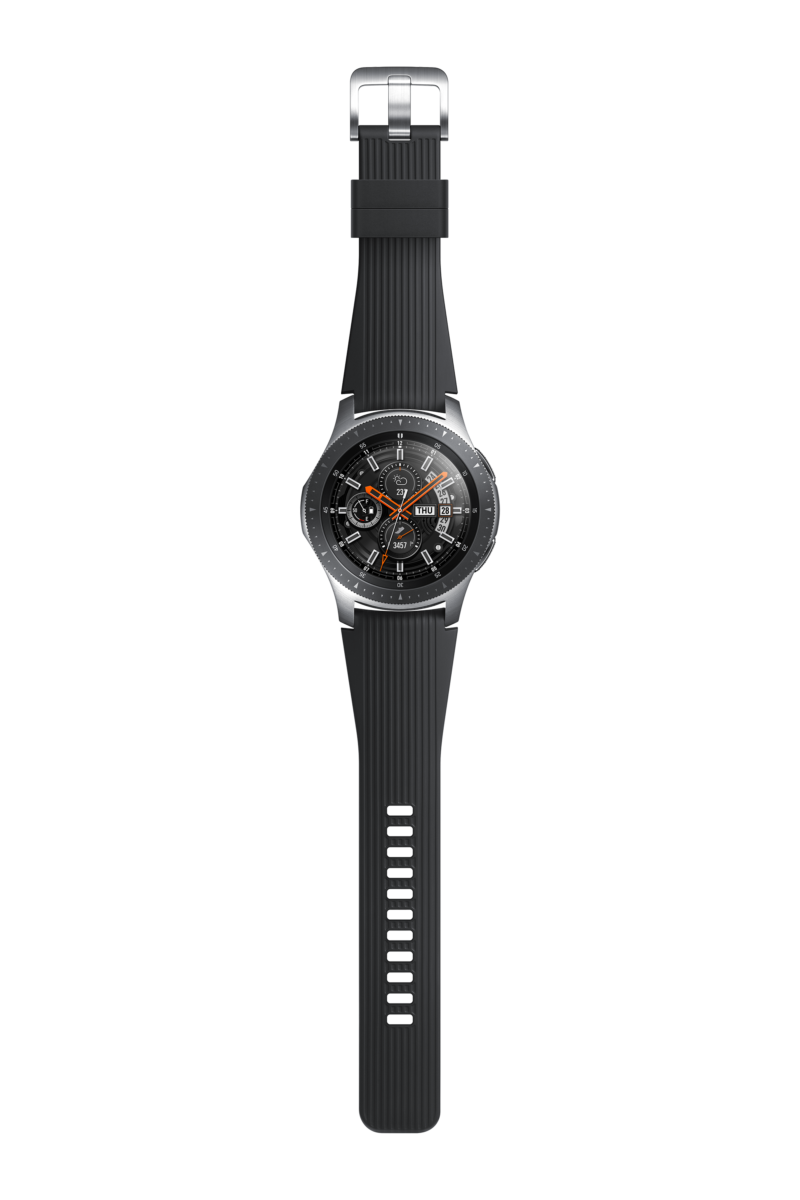 The Galaxy Watch also retains a similar rotating bezel to get about the menus and has a nifty looking series of watch ticks and hourly chimes on top of a depth effect on the Super AMOLED panel to make it look like a real watch though it’s already quite aways there in terms of its design. 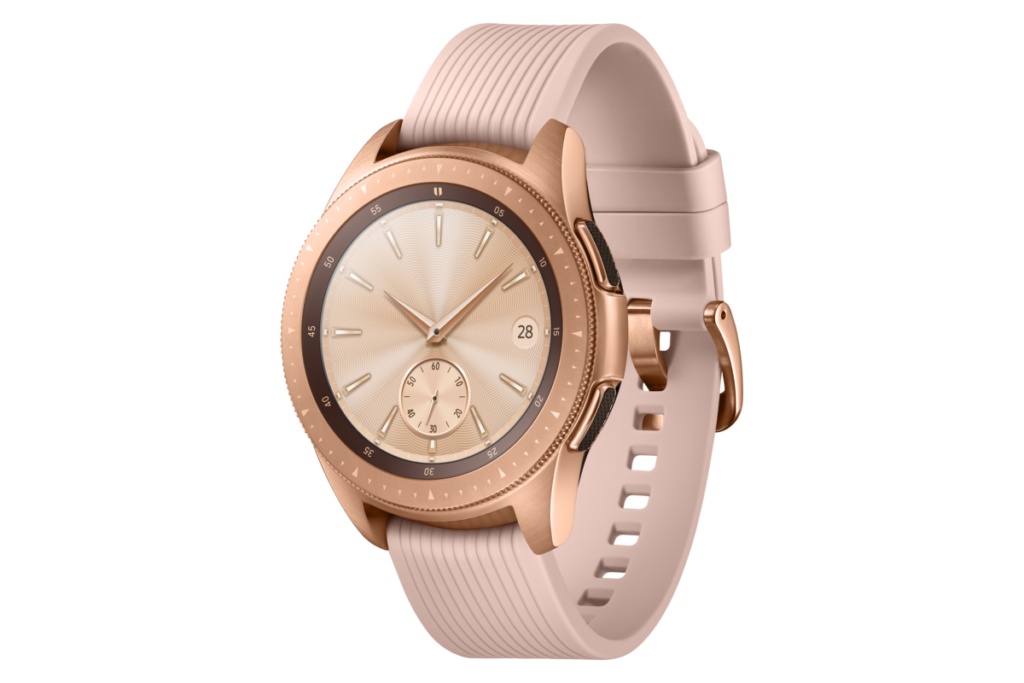 Both displays have a similar 360 x 360 pixel resolution and are sheathed in robust Corning Gorilla Glass DX+. Both sizes of the Galaxy watch also boast of robust waterproofing with an IP68 rating and the ability to survive in up to 5ATM of water which is an impressive 50 metres in the drink; the ability to survive immersion in water to that depth level is something shared by the Galaxy Sport released last year which means you can take these watches to the pool for a dip. 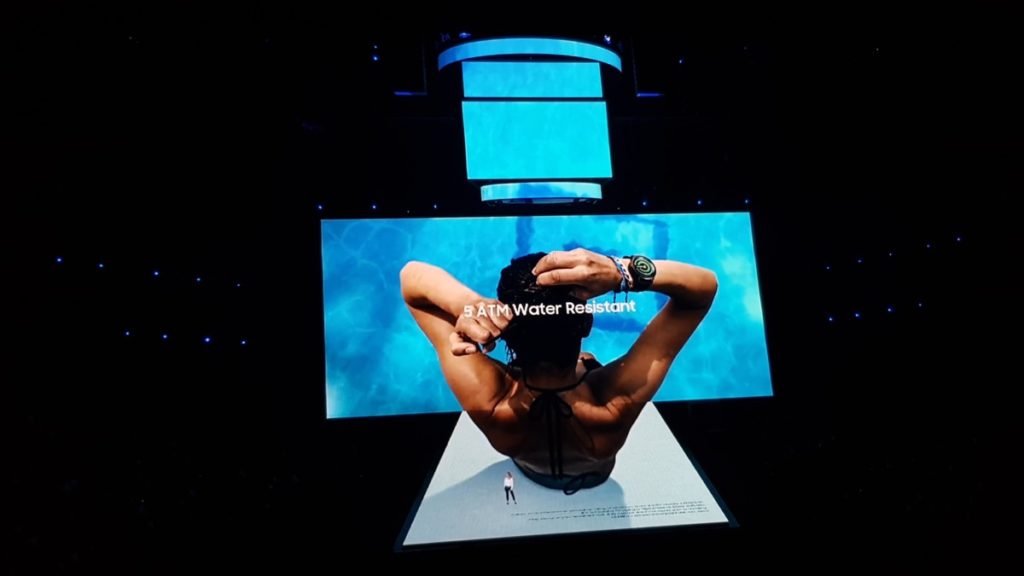 The larger 46mm Galaxy Watch also has a commensurately larger 472mAh battery while the smaller 42mm Galaxy Watch has a 270mAh battery. Bar the battery and physical size differences, both sizes of the Galaxy Watch have almost identical hardware under the hood with an Exynos 9110 1.15GHz dual-core processor running their proven Tizen OS 4.0 operating system. This is mated to about 768MB of RAM and 4GB of internal memory which puts it on par with the existing Galaxy S3 Frontier and Sport in terms of storage though the Exynos 9110 processor is quite a bit nippier when crunching pixels. Both size variants also have an LTE-enabled variant which has 1.5GB RAM and 4GB of memory as well though availability is dependent on region. Historically speaking, Malaysia has only ever had the Wifi-enabled variants so the odds of the LTE version arriving here are unlikely though it can change. 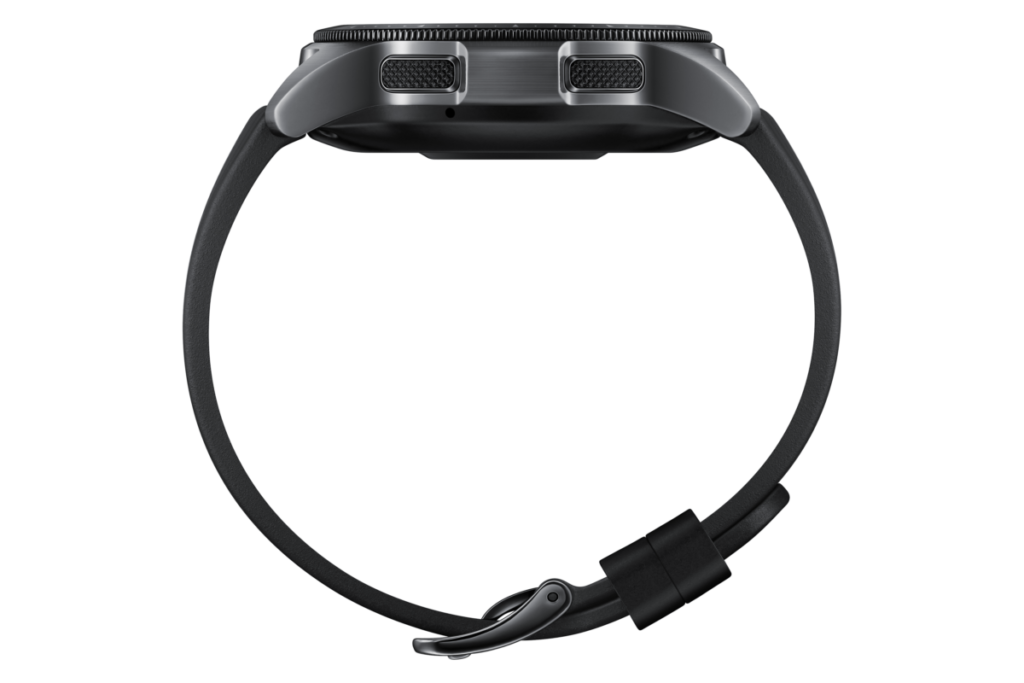 Like earlier examples of the Samsung’s smartwatches, the Galaxy Watch has interchangeable straps that you can swap out with third party straps at will. The larger 46mm accepts universal 22mm straps and comes out of the box with the possible option of straps in Onyx Black, Deep Ocean Blue and Basalt Grey. The smaller 42mm watch has a plethora of colour options and accepts universal 20mm straps though you can acquire it with straps in Onyx Black, Lunar Grey, Terracotta Red, Lime Yellow, Cosmo Purple, Pink Beige, Cloud Grey or Natural Brown. B

In terms of availability, Samsung announced that the Galaxy Watch will hit the US this August 24, in Korea on August 31 and in selected other markets in September 14. There’s no news of pricing or availability for Malaysia but we’ll keep you posted. 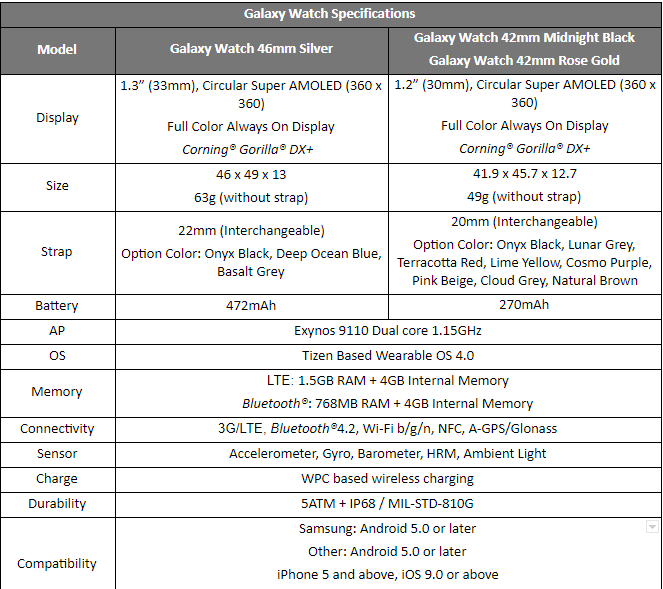