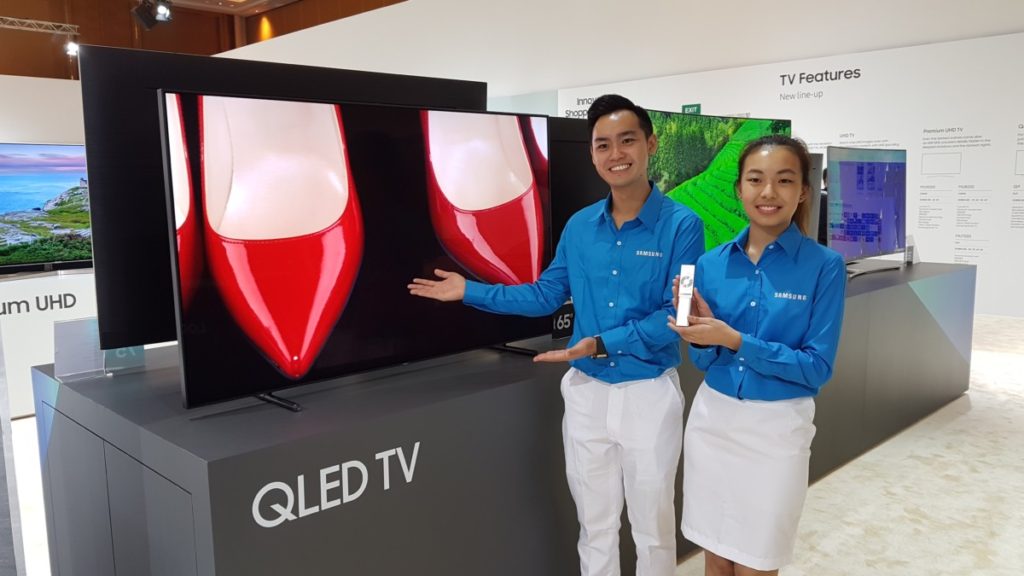 Samsung’s Southeast Asia Forum is an annual affair by the tech giant that showcases their latest innovations in household tech, TVs and anything else that usually isn’t a smartphone or a tablet for the technorati in Asia. 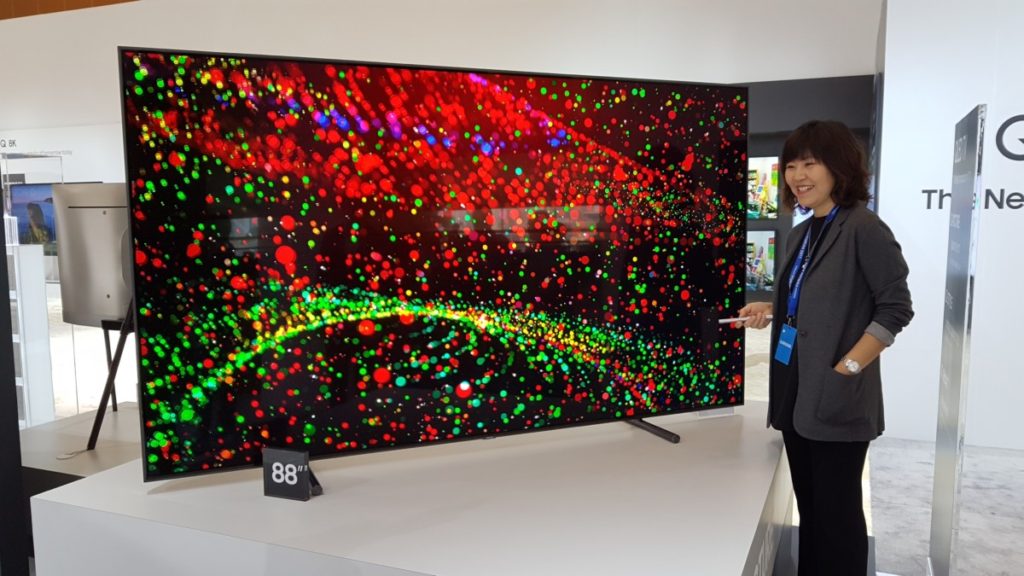 While it made an appearance at Consumer Electronics Show in the United States earlier this year, Samsung’s new QLED TVs are now making their debut here at SEA Forum 2017 as the centrepiece of their showcase that also includes a host of their white-goods bound for the Asia market such as their new vacuum cleaners, robot vacuum cleaners, refrigerators and more. 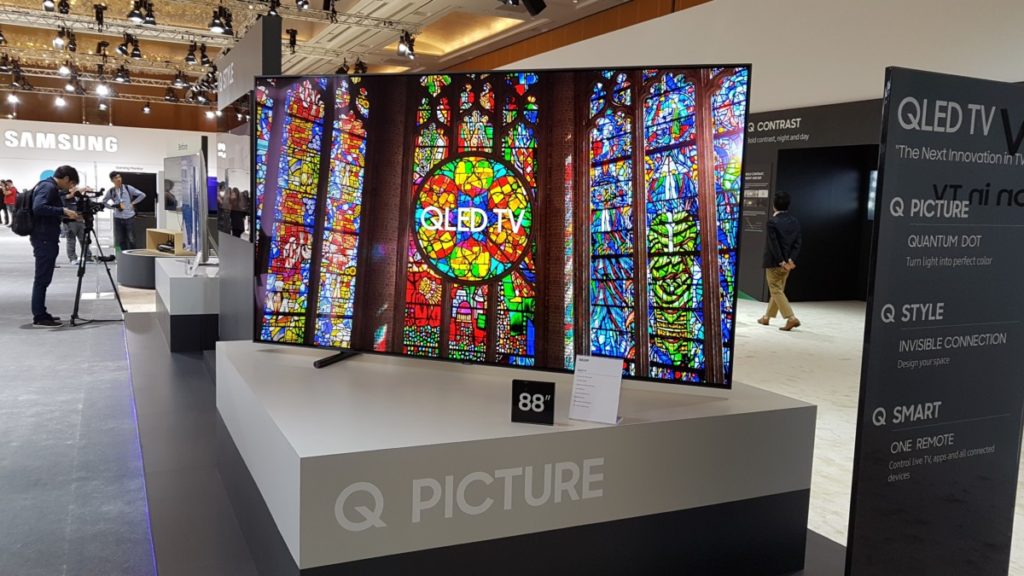 The new QLED 4K TVs come in three variants dubbed the Q7, Q8 and Q9, differentiated by size and also whether it comes in a flat or curved variant.

The Q7 series only appears as a flat panel design in 55-inch, 65-inch, and 75-inch sizes starting from US2,499 for the lowest sized flat screen model which works out to about MYR11,138 or so. Details on pricing are scarce on the QLED Q9 though it comes only as a flatscreen in 88-inch, 75-inch and 65-inch sizes. 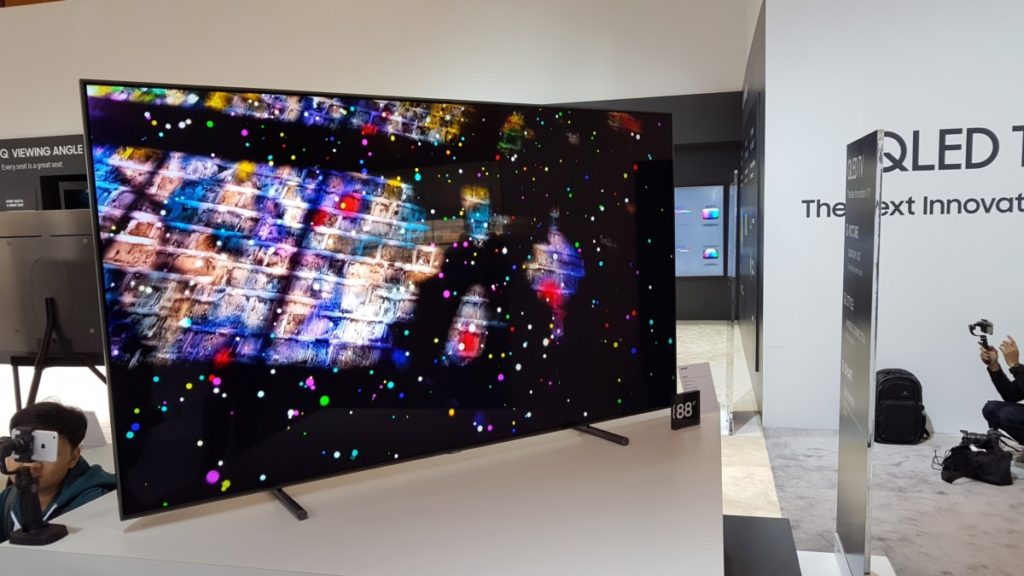 The TV ships with a standard stand but users may purchase optional stands to mount the TV. Users are able to select from two different TV stands – a pedestal style Gravity stand and a ‘Studio Stand’ that resembles an easel-style mount. 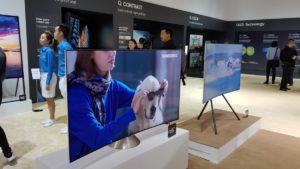 The two different stand options for the new QLED TVs

The new QLED TVs can also optionally mount be mounted with a ‘no-gap’ wall mount that leaves the TV almost flush with the wall while an almost translucent optical cable eliminates clutter with most of the ports clustered around an external box in a fashion akin to their previous smart TVs. 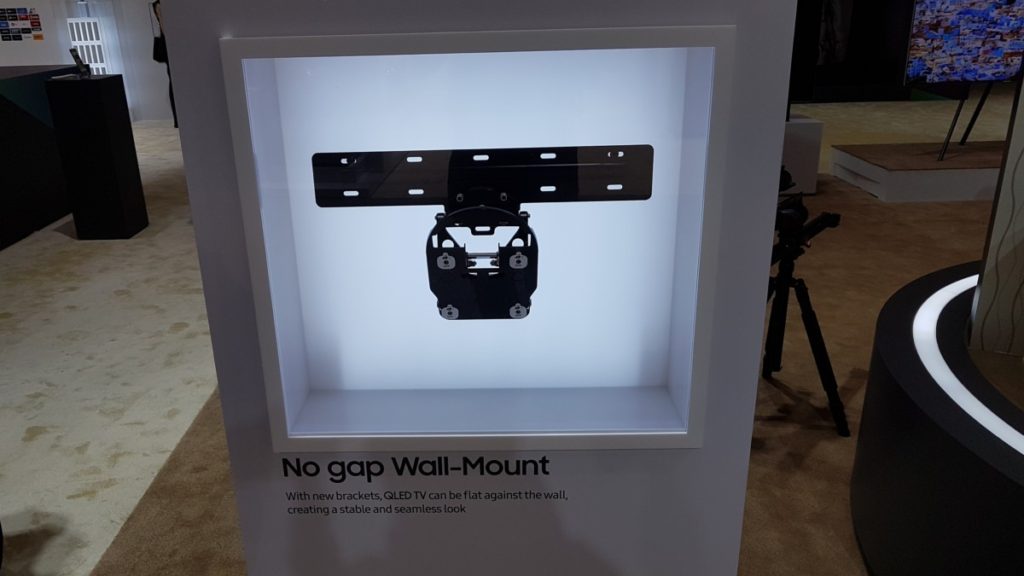 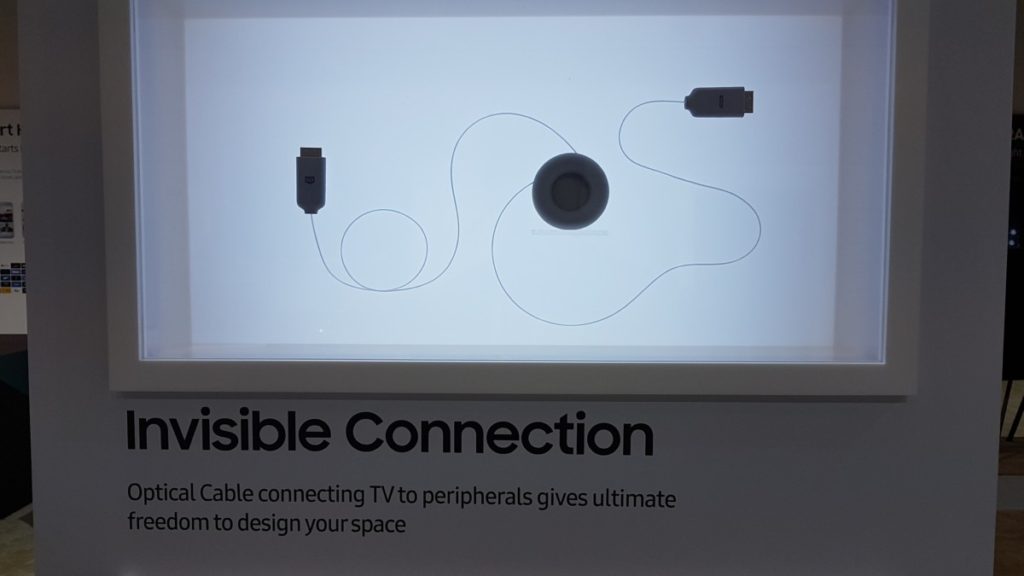 What exactly is QLED?
A refinement of the tech used in their earlier SUHD (Super UHD) TVs from last year, the new QLED displays aim to offer an even more vivid viewing experience. An acronym for Quantum Dot Light Emitting Diode, QLED TVs are a significant refinement of Samsung’s quantum dot technology. Imagine an intricate, almost unviewable to the naked eye quantum dot nanocrystal lattice that forms the display which, in combination acts to produce colours and images onscreen. Still with us? Good. 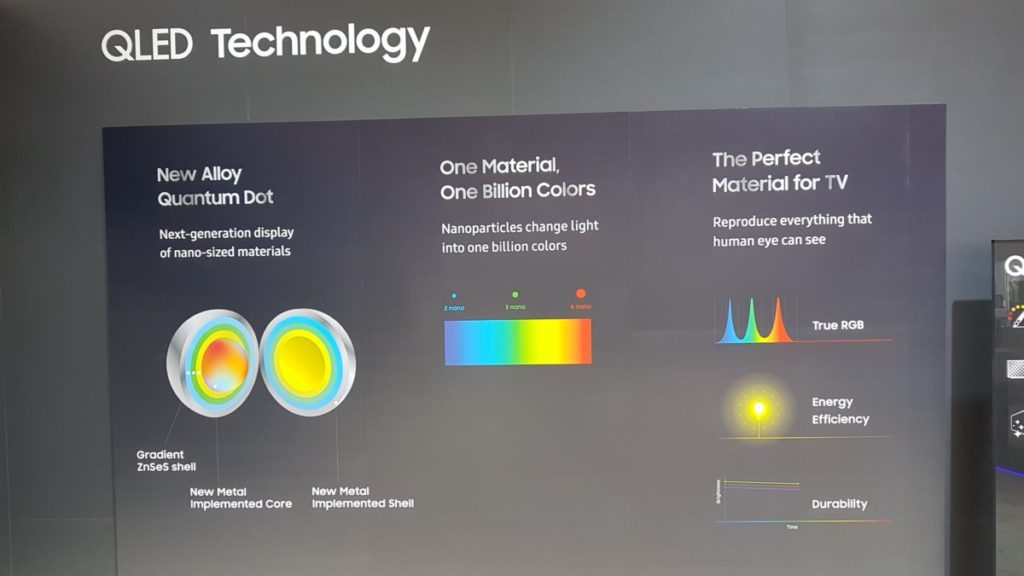 What QLED does is that it wraps these quantum dots in a new metal alloy for vastly improved brightness, ultra deep blacks, and better viewing angles than anything else they’ve ever made before.What this new alloy does is allow for even better performance for each quantum dot. Colour reproduction has been vastly improved with the ability to display 100% colour volume at any brightness level; this means the new QLED TVs can effectively depict almost any colour possible at 100% accuracy – a world first according to the brand – and even better yet, at almost any brightness level and the QLED TVs are even brighter than before with the ability to express levels of 1,500 to 2,000 nits. This effectively means the TVs are able to serve up great visuals regardless of how dark or bright your ambient viewing conditions are. 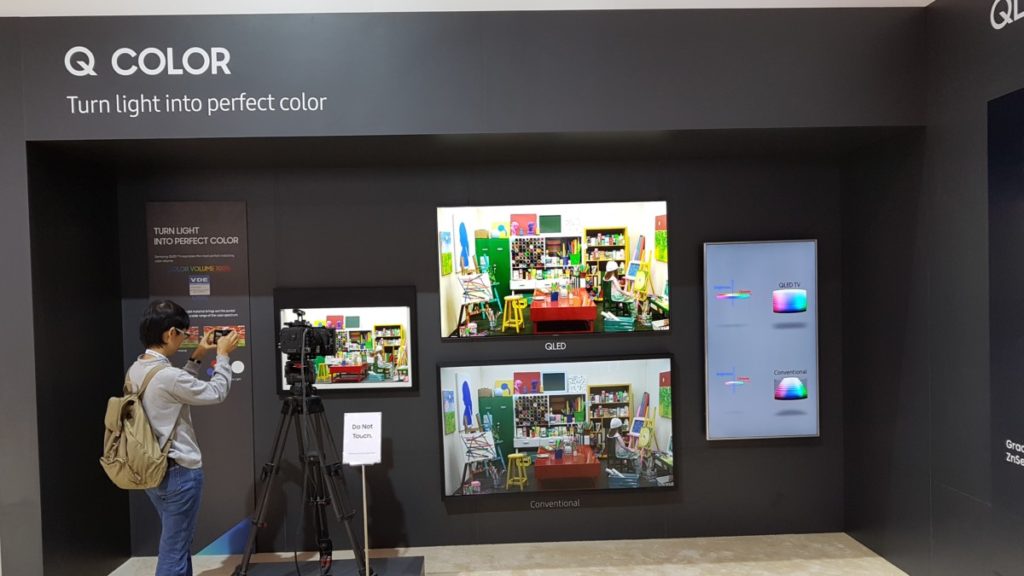 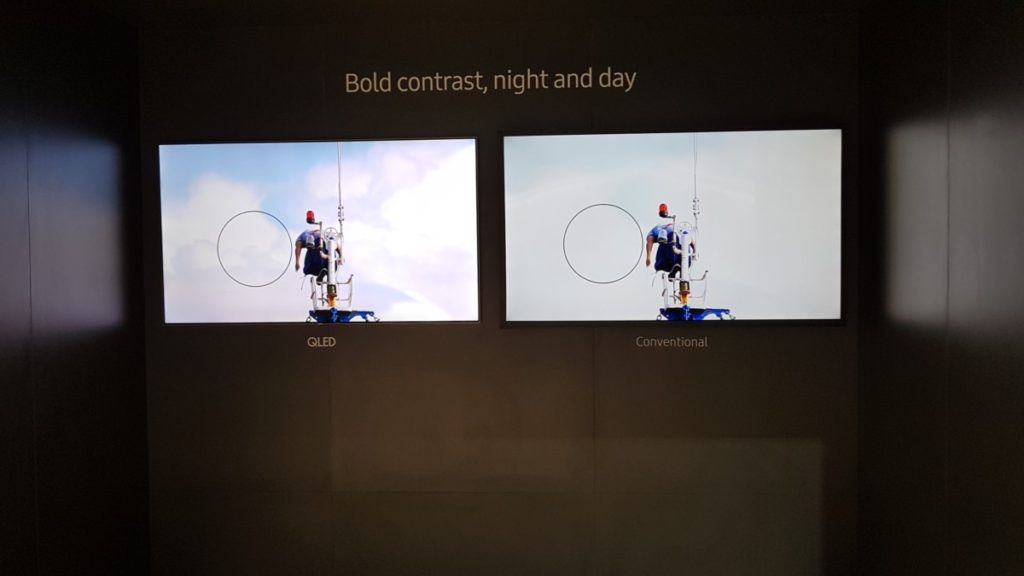 Another new feature about the new QLED TVs that acts as its centrepiece of their Smart TVs is their SmartHub user interface built on their own Tizen operating system that acts as a user interface and allows users to access content and control connected devices seamlessly. This time around, it’s gotten a general sprucing up and is even easier to connect to a device as the QLED TV automatically detects everything it hooks up to with the provided Smart Remote that is able to control them at will. 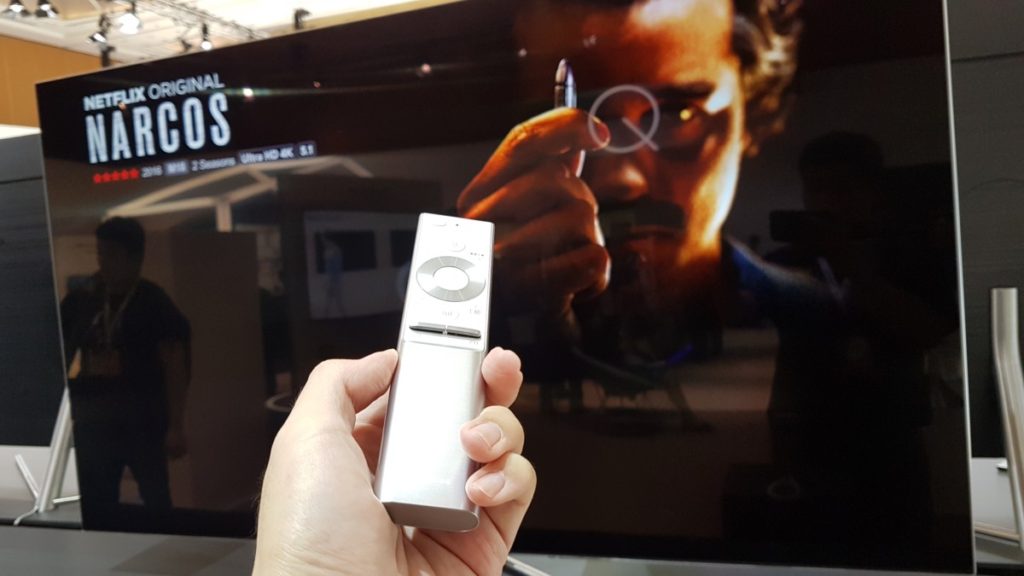 The new Smart Hub also works with smartphones after a fashion with an updated, downloadable Smart View app allowing users to display and control playback on the QLED TV along with the ability to accept voice commands. Details as to which models, what price tag they will retail at and their launch dates remain elusive for Malaysia but more news when we get it.