Samsung’s Galaxy Note series phablets are easily the most powerful, most refined phones that the brand can offer and even with a plethora of leaks beforehand, they’ve still got plenty of surprises to offer. Rather than just one model, Samsung has debuted two differently sized variants at their Samsung Unpacked launch in Brooklyn, New York in the form of the Galaxy Note10 and the larger GalaxyNote10+.

Both variants of the Note10 come with IP68 water resistance  and both have a distinctive cutout symmetrically placed in the top of the display for the selfie camera while the displays themselves are Dynamic AMOLED panels with HDR10+ certification along with Eye Comfort tech to make it easier to view on the eyes. Their key draw, the S Pen has had major upgrades this time around. Both the Galaxy Note10 and Note10+ feature these key upgrades:

Last year’s wireless S Pen wowed the crows as it was able to act as a remote control to capture selfies and perform a select series of tasks like media playback. This time around, the enhanced S Pen has the ability to convert handwriting to text in Samsung Notes with the ability to export to different formats including Microsoft Word, PDFs and text.

What really impresses though is that they’ve added gesture controls via an integrated accelerometer, a 6-axis motion sensor and gyro sensor , allowing you to wave the S Pen around like a wand to control camera modes, zoom in and out and more without ever having to touch the phone. What really knocks it out of the ballpark is that Samsung is offering their Air Actions SDK, allowing developers to add it as a control set for gaming or other apps. 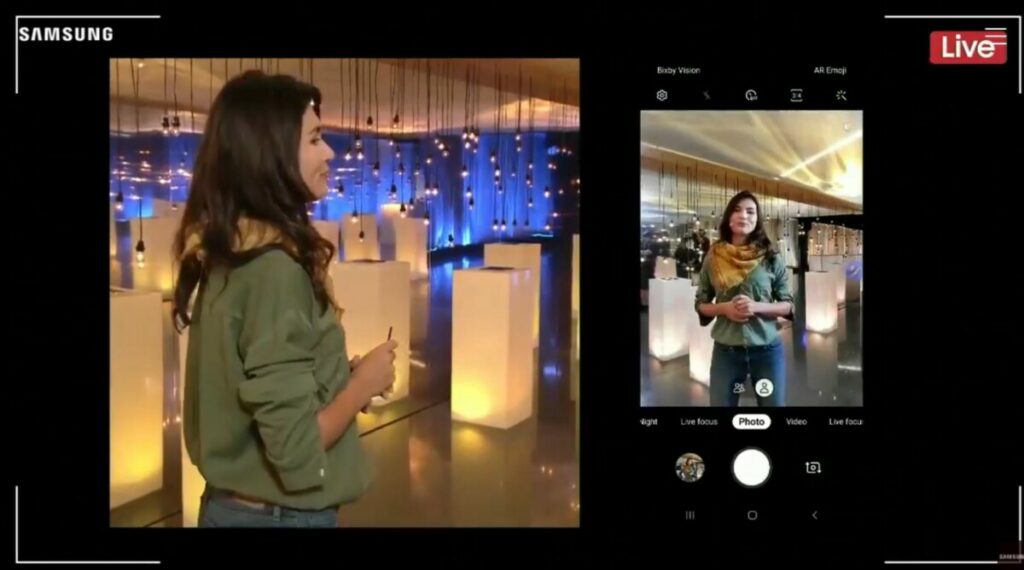 Samsung’s DeX mode lets you hook the phone up to a monitor via a HDMI cable to enable a desktop mode to use it as an ersatz PC of sorts with a desktop interface. For the Galaxy Note10 series, DeX can hook up to a phone or Mac via a USB connection to drag and drop files without any complicated pairing or fuss.

The Note10 series also sports a new Link to Windows shortcut that lets you interact with notifications and content on the phone without having to access the phone directly.

The Galaxy Note10 has a rear triple camera array while the Note10+ has a quad camera array with an additional ToF 3D camera. What has been enhanced this time around their Live Focus Video which lets you add bokeh to your videos while their Zoom-in Mic lets you focus on in-frame audio while squelching background noise.

Another upgrade is stabilisation for time-lapse videos.  They’ve also added in an enhanced built-in video editor though you can opt for Adobe Rush if you’re looking for a more fuller featured editing option. 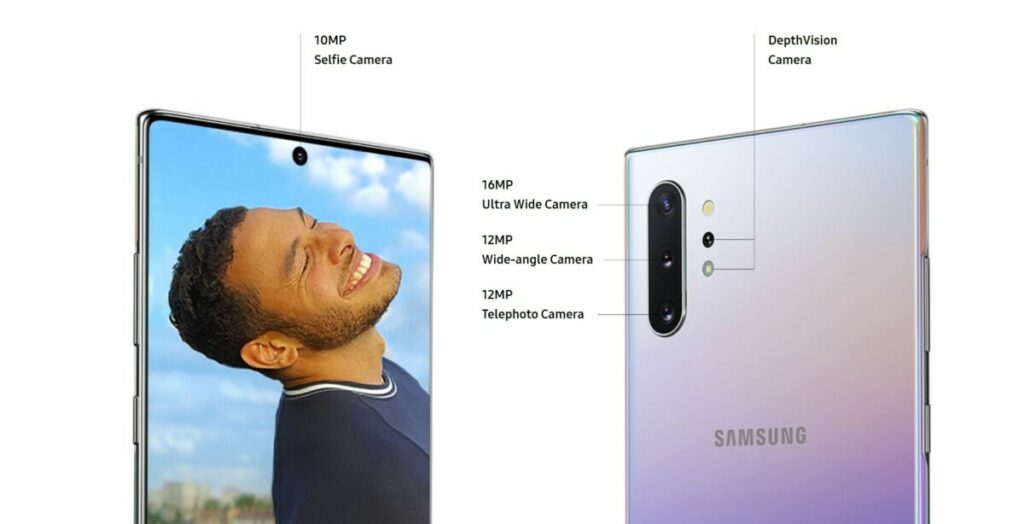 The Galaxy Note10 has a size and form factor similar to its predecessor the Note9 with a 6.3-inch Infinity-O Dynamic AMOLED display with 2,280 x 1080 pixel resolution that has a tiny punchout in the top centre of the phone to mount the front-facing 10-MP selfie camera with Dual Pixel phase detection autofocus.

Under the hood, the Galaxy Note10 sports Samsung’s either a Qualcomm Snapdragon 855 chipset or the new Exynos 9825 chipset built on the 7nm EUV lithography process, 8GB RAM and 256GB of expandable storage. The Exynos 9825 is rated to have 33% faster CPU performance and 42% faster GPU performance than its predecessor seen on the Note9. Units destined for Malaysia will have the Exynos 9825 processor.

The rear camera on the Galaxy Note10 is a triple camera array with a primary 12-MP Dual Pixel camera that can swap apertures between F/1.5 and F/2.4 depending on light conditions. This is paired with a 12-MP optically stabilised telephoto camera with 2x optical zoom and a 16-MP ultrawide angle lens camera.

The new Galaxy Note10 lacks a 3.5mm audio jack but retains IP68 water resistance, has stereo speakers and a 3,500mAh battery with 25W fast charging along with their PowerShare feature to wirelessly charge other devices on the backplate of the phone. The Galaxy Note10 will retail for US$949 for the LTE variants and US$1,049 for the 5G enabled variants in Aura Glow, Aura White and Aura Black. Global preorders start today and will be available at retail on August 23rd across the globe. 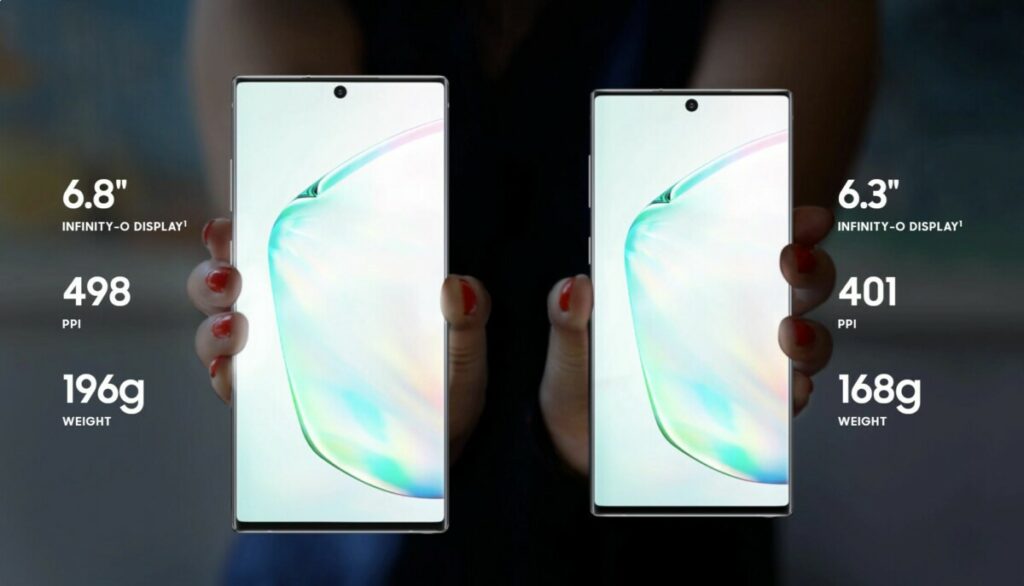 The larger, more powerful Galaxy Note10+ has a massive 6.8-inch Dynamic AMOLED Infinity-O display with 3,040 x 1,440 pixel resolution and is upscaled in size from the Note10 in terms of the size and sharpness of its display, RAM, battery capacity and also has a more powerful rear quad camera array.

As par for the course, the Galaxy Note10+ comes with either a Snapdragon 855 octacore processor or an Exynos 9825 processor with units destined for Malaysia sporting the latter. The larger and more powerful Note10+ will come with a whopping 12GB RAM and either 256GB or 512GB of expandable storage.

The rear camera array consists of a 12-MP Dual Pixel camera that can swap apertures between F/1.5 and F/2.4 depending on ambient light conditions along with OIS, a secondary 12-MP telephoto lens with OIS and 2x optical zoom, a third 16-MP  camera with an ultra wide angle lens and an additional TOF 3D camera over the Note10’s triple camera array. The front hosts a 10-MP camera with Dual Pixel phase detection autofocus.

Like the smaller Note10, the Galaxy Note10+ has their enhanced DeX mode and the phone also sports stereo speakers though, alas, as per prior leaks, the phone lacks a 3.5mm audio jack. Fortunately, it still retains IP68 water resistance. Powering the phone is a 4,300mAh battery with 45W wired fast charging that allows it to get an all-day charge in just 30 minutes, their wireless PowerShare to charge other devices on the backplate of the phone.

The Galaxy Note10+ will ship in three colours – Aura Glow, Aura White and Aura Black and will retail with prices starting from US$1,099 for the LTE versions and US$1,299 for the 5GB enable variants. Like the Note10, global preorders start today for the Note10+ and it will be available at retail on August 23rd across the globe.

When are the Galaxy Note10 and Note10+ coming to Malaysia?

Preorders for the Galaxy Note10 and Note10_ are up and are taking place from 8 to 18 August. Swing by their official page at https://note10preorder.mysamsungcampaign.com/ for more details.