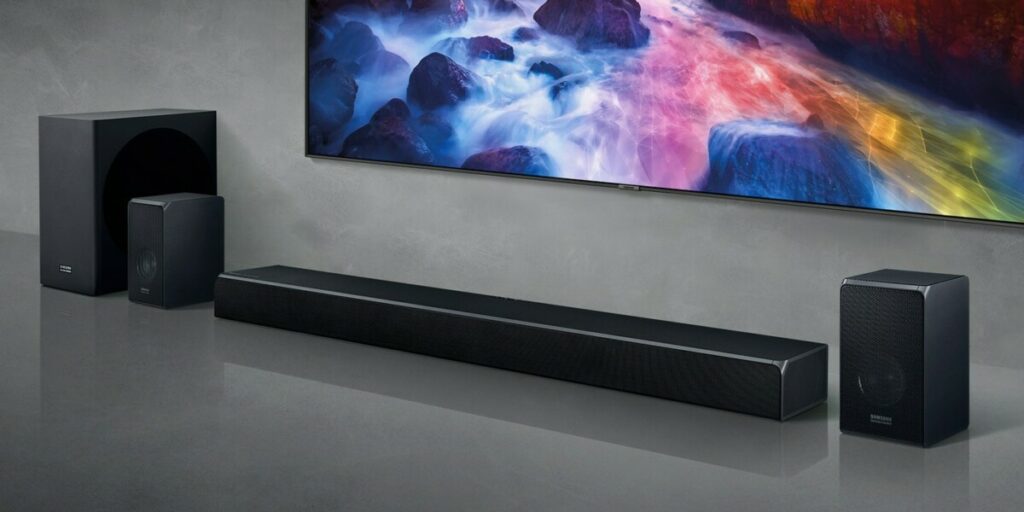 Samsung’s acquisition of Harman Kardon a few years back has paid dividends, especially in regards to their improved mastery in the audio quality of all their peripherals from their earbuds like the recently launched Galaxy Buds all the way to their most powerful wireless soundbar for the consumer market, the immensely huge Samsung HW-Q90R that we had the pleasure to field test. 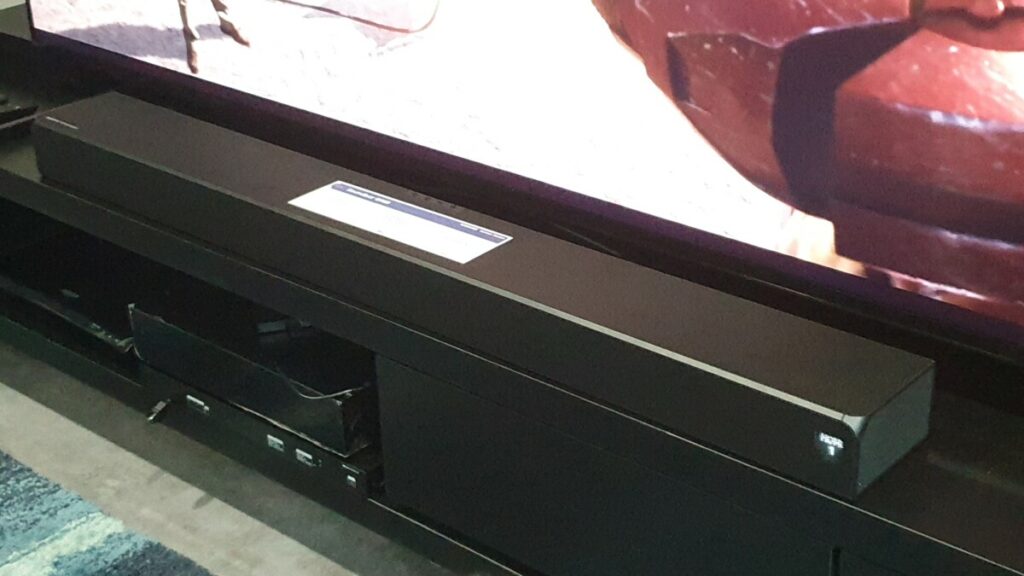 Intended as the successor to last year’s Samsung HW-N950 soundbar, the Q90R does bear some aesthetic similarities though the subwoofer has been redesigned for better performance along with a general all-around upgrade to its capabilities. 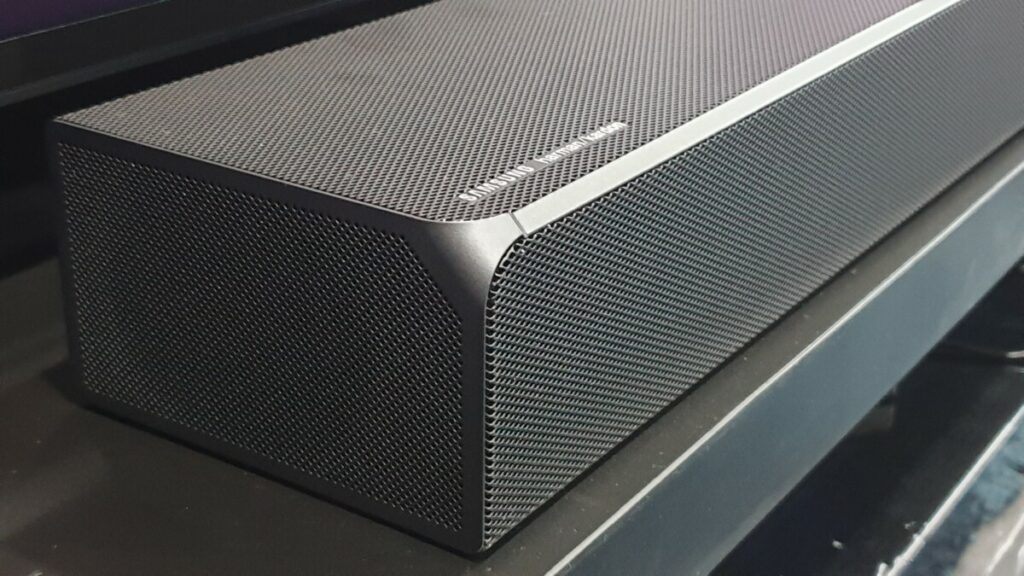 The HW-Q90R adds in support for a host of the best audio formats, including Dolby Atmos, Dolby Digital, DTS-X and DTS Digital Surround. Another particularly important feature of note is its ability to upscale any 8 -bitto 24-bit audio to UHQ 32-bit audio from compatible devices.

It also throws in a new Adaptive Sound mode that will intelligently adapt the audio based on what you’re listening to and plunking it into either news, music, movie watching or gaming, adjusting the audio for best results though there is also dedicated Game Pro mode for gaming, a Surround mode specifically for movies as well as a more neutral Standard mode.

Of particular note with the HW-Q90R is integration and support for Samsung’s free downloadable SmartThings app which makes setting it up, connecting to it and interacting with it along with other connected devices an absolute doddle.

The primary soundbar still sports a similar low-profile, matte black finish to the older HW-N950 that they’ve dubbed as Carbon Silver and fulfills its intended purpose to be a subtle addition to a home theatre setup either mounted on a wall or perched just below one of their QLED TVs. 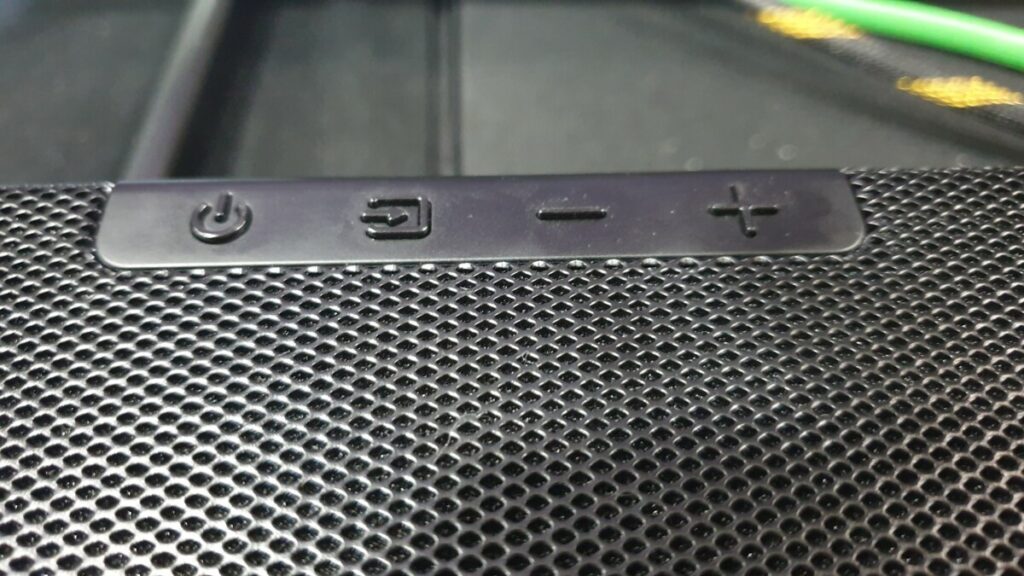 The edges are beveled while a series of tiny holes are drilled all across its expanse for better acoustics. Much like its predecessor, you have a series of physical buttons in the upper mid-centre of the soundbar and a white light-up LED display in the front right corner that only appears if you’re tinkering with the menus. 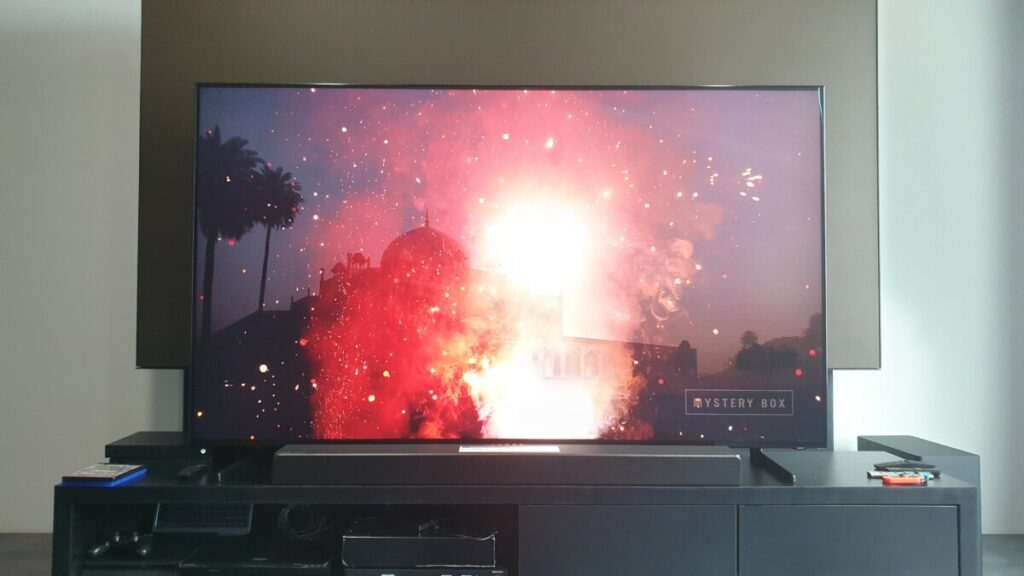 Crammed within it is a veritable orchestra with three front-facing left , three front-facing centre, and three front-facing right for a total of nine speakers with each tri-cluster consisting of a pair of woofers and a tweeter pointed right at you, a pair of upward firing speakers and left and right width speakers for a grand total of 13 drivers shoehorned into the main soundbar to generate part of a complete 7.1.4 Ch soundscape. 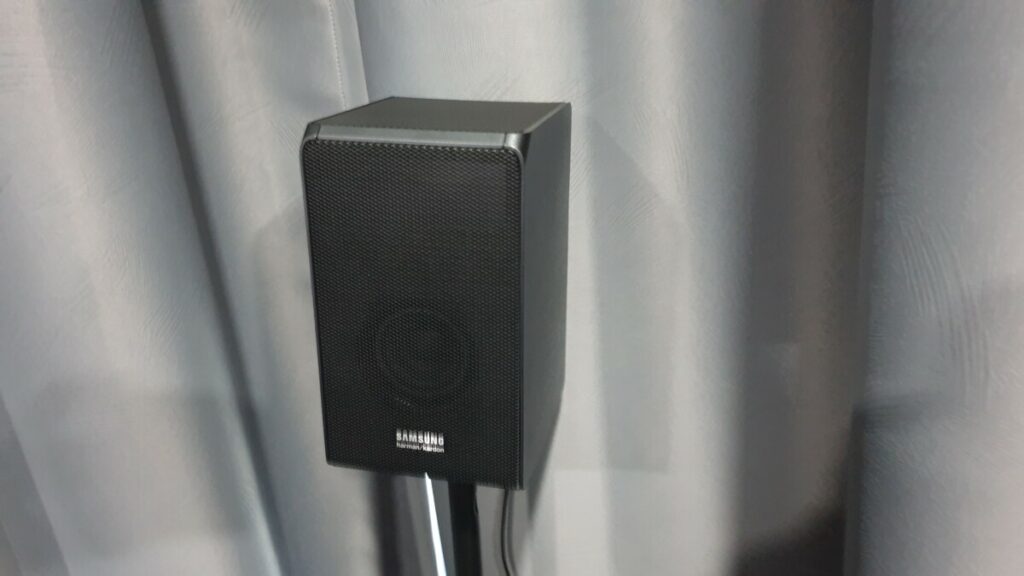 The magic is completed by a pair of wireless rear speakers that also sport a Carbon Silver finish much like the main soundbar, each with a top firing and forward firing speaker as well as the wireless 8-inch side-firing active subwoofer with a rear bass port, also finished in a similarly classy matte Carbon Silver paint job. 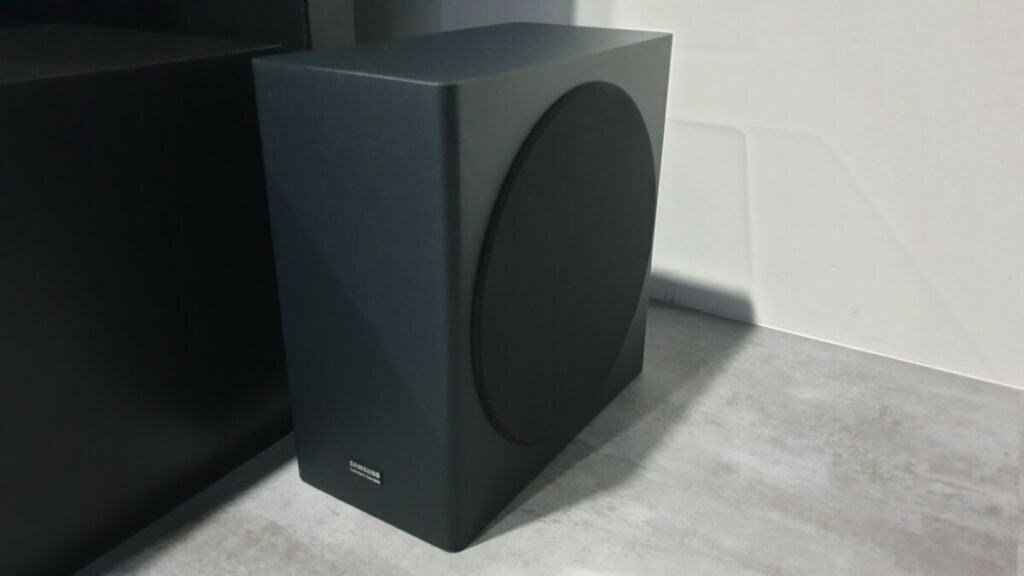 This gives the whole affair a whopping grand total of 17 speakers as well as the aforementioned subwoofer to serenade your eardrums to glory to the tune of 512W of combined power and a claimed frequency response that goes from 34Hz to 17kHz.

In terms of ports, the soundbar has several ports recessed in a panel with a digital audio-in, a pair of HDMI ports and an HDMI (ARC) output. The back also has a USB port but that’s strictly for upgrading the firmware. This is on top of WiFi and Bluetooth connectivity. More HDMI ports would be welcome especially if you are wont to hook up consoles or other kit to the HW-Q90R. The HW-Q90R also comes with a remote control that is essentially identical to that bundled with the N950 from last year.

Setting up the Samsung HW-Q90R requires a bit of leg work along with some calibration for the various settings if you’re using a non-Samsung branded telly but if you already are using one like their Q900 8K QLED TV, it’s simply a matter of hooking it up and away you go.

For starters, we were treated to the 4K UHD Bluray version of the Avengers movie with Dolby Atmos support playing on a new 82-inch Q900 8K QLED TV, specifically the battle for New York sequence where the HW-Q90R and its 7.1.4 channel surround sound was able to show its chops. We enabled the Adaptive setting and were treated to an aural feast as the invading Chitauri started racking up gratuitous amounts of property damage in downtown New York. There’s a vibrant, punchy soundstage as masonry is flying helter skelter and the various Avengers are out proactively dissuading the Chitauri from invading with extreme prejudice. Black Widow’s Glock 26’s delivered crisp reports along with clear dialogue even amidst the general chaos. The HW-Q90R’s dedicated subwoofer did a bang-up job with rich and thumpy bass to punctuate all the key events in the clip. If you have suitably high quality mastered audio for your movies or a Netflix account, you’ll be in for a real treat. 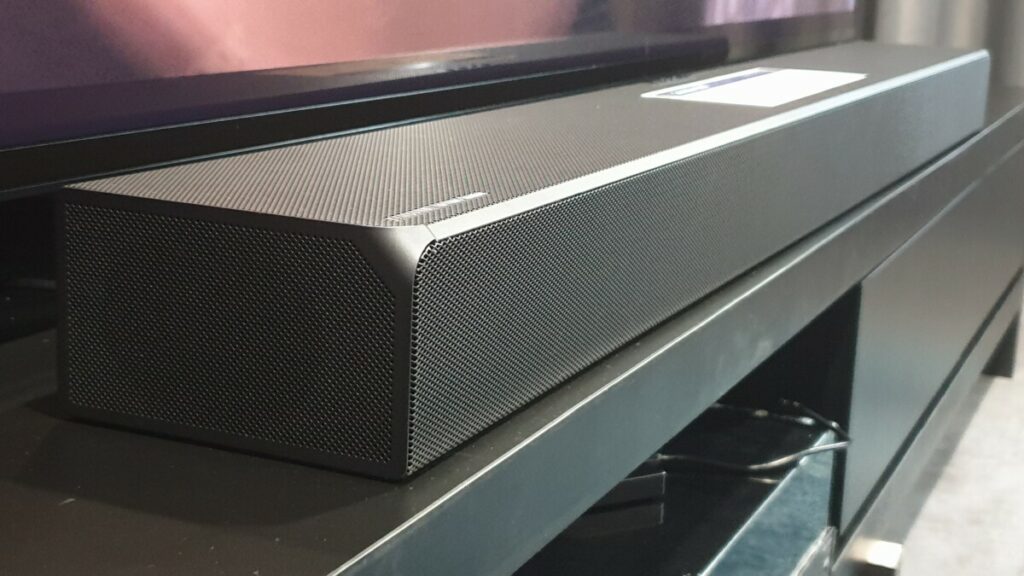 We also field tested it with a bit of gaming with the Nintendo Switch’s Zelda Call of the Wild. Less of the bass was needed here but the subtle trills and trebles as sonic queues in the game along with some of the more sweeping background music were handled in a beautiful fashion. Shadow of the Tomb Raider on an Xbox One was given an extensive field test as well and the game’s diverse sound queues like creaking bridges, enemy barks and the rich sound staging of an ongoing festival full of people and background chatter were all given an extra element of immersion with the HW-Q90R’s impressive array. When a console is detected, the soundbar automatically fires up Game mode which makes it less of a hassle to get stuck in.

On the music front, the HW-Q90R was an absolute delight with vividly realistic vocals, the ability to handle intricate tracks such that each instrument was distinct and unique. Enya’s intricate and multi-layered Orinoco Flow was breathtaking and Joanna Wang’s vocals came out rich, honeyed and mellow front and center with accompaniment almost as if you’re right on a stage with her in front of you. 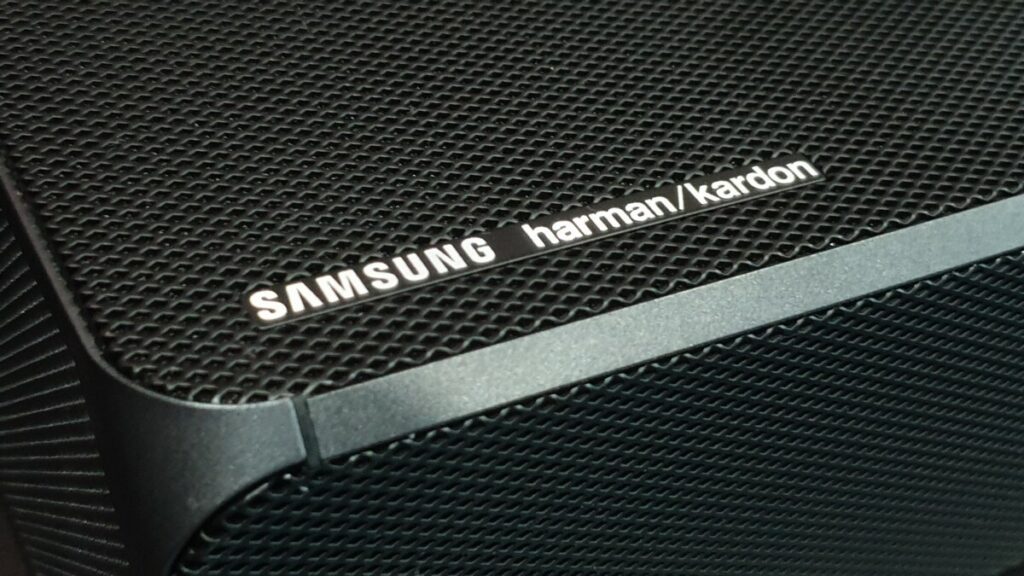 As it stands, Samsung’s HW-Q90R is an impressive soundbar in every way with the ability to tackle movies, gaming and music with deft aplomb, delivering sound that comes out rich and clear along with thumpy bass and a truly immersive soundstage. The HW-Q90R does not come cheap but what you’re getting is an easy to deploy and complete 7.1.4 Ch wireless sound system straight into your home.

What we liked Excellent build quality, classy design, outstanding sound quality with superb sound staging and bass
What we didn’t Still needs more HDMI ports
We say The Samsung HW-Q90R wireless soundbar sets the bar with exceptionally rich and detailed sound, outstanding bass and seamless connectivity that make it well worth the price of entry.