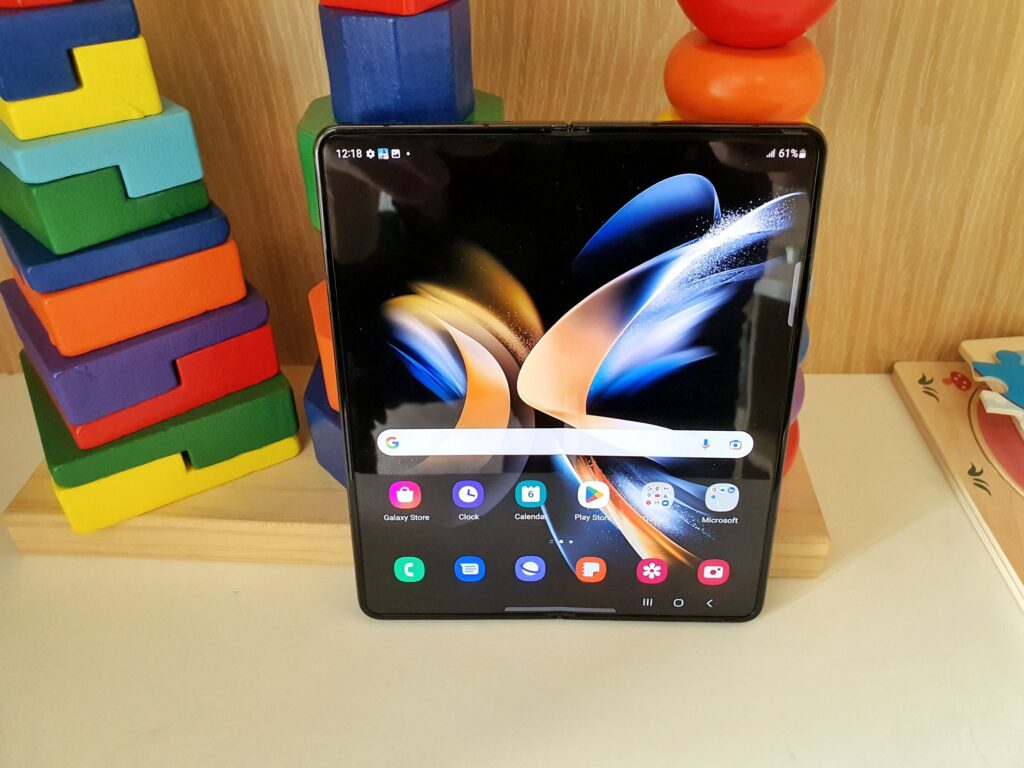 The Samsung Galaxy Z Fold4 made its global debut a few weeks ago and is now making the official rounds in Malaysia at retail stores. We managed to get our hands on a retail unit and in the coming weeks, we’ll be putting it through its paces in a full review.

In the meantime, our Samsung Galaxy Z Fold4 first look and unboxing  discovers what’s in the box, what improvements that Samsung has made in their flagship foldable and also gives a quick onceover of what hardware it has under the hood. 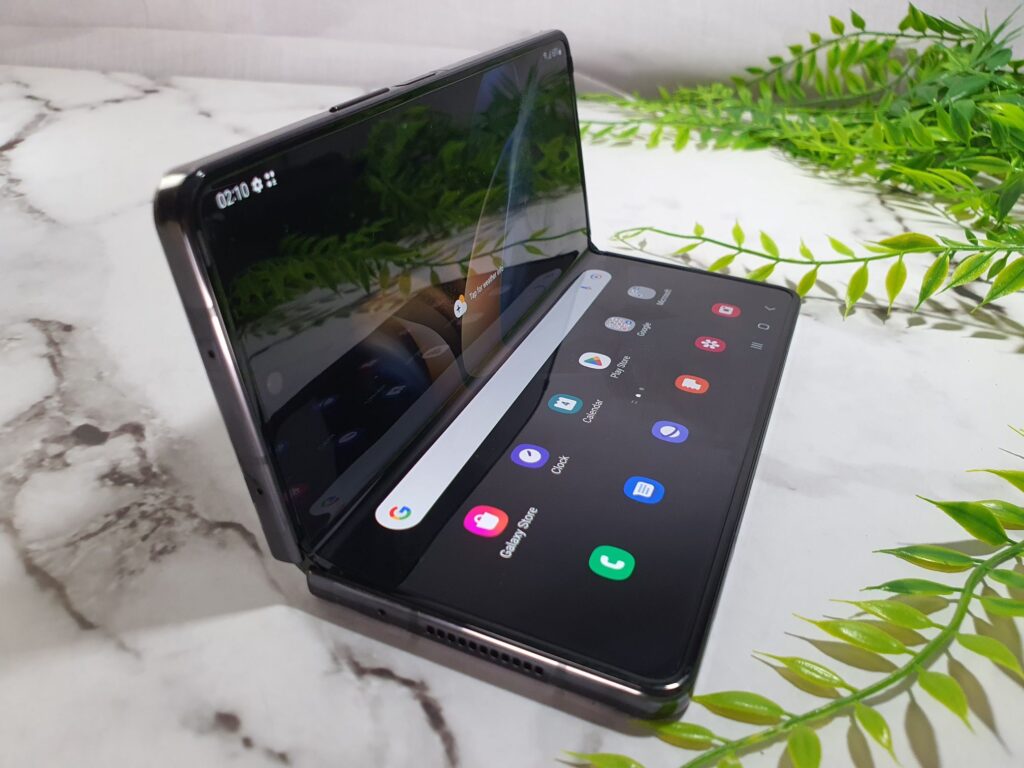 In keeping with Samsung’s recent sustainability initiative, the Samsung Galaxy Z Fold4 comes in a box with the bare minimum of kit. On top of the phone itself securely wrapped in a sheath of protective plastic, you get a USB-C charging cable, a SIM eject pin and a quick start manual in a cardboard sleeve. Beyond these bare essentials, you get aught else. 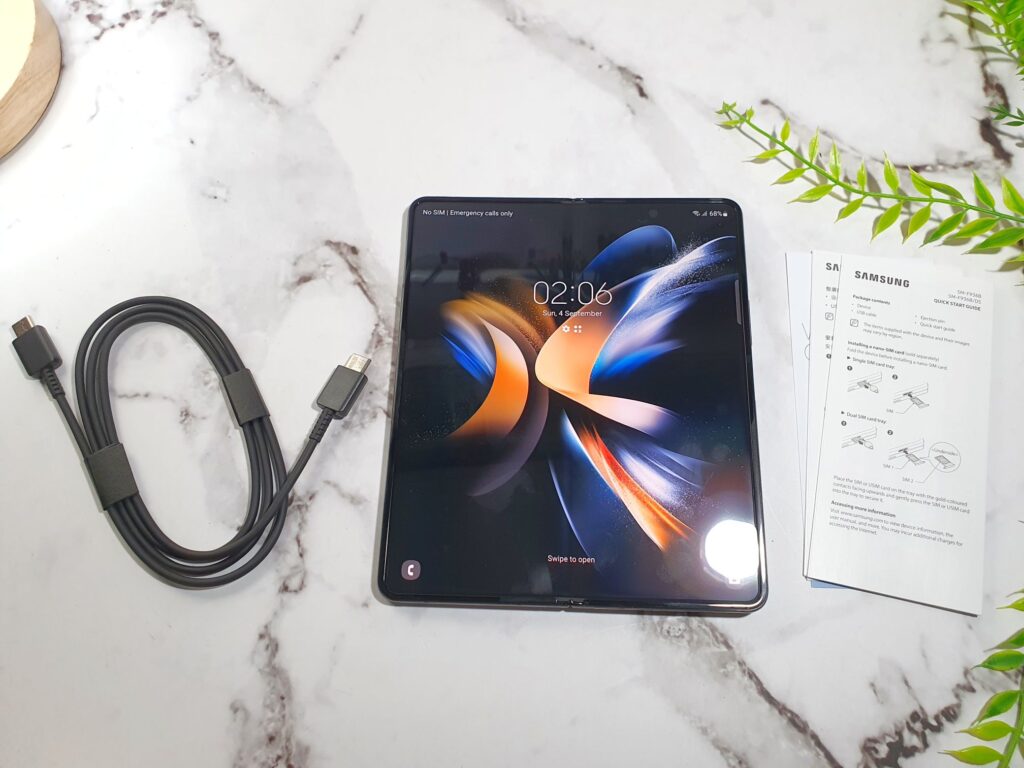 Samsung Galaxy Z Fold4 First Look – In the box, Samsung has the Fold4 protected in a plastic sheath, a USB-C cable, a SIM eject pin and a quick start manual

There’s no charger or other kit issued with the phone so you’ll need to use an existing one or acquire a third party charger like the UGreen 100W GaN charger that supports Power Delivery 3.0 charging to take full advantage of the phone’s 25W wired fast charging.

Out of the box, the Samsung Galaxy Z Fold4 looks somewhat similar to the older Galaxy Z Fold3 though it hosts an array of subtle improvements. Rather than reinventing the wheel, Samsung has instead built on the proven form factor that they’ve refined since the original Galaxy Z Fold with a front cover display to handle most basic tasks and an inner folding display for when you need tablet oriented functionality.

The Galaxy Z Fold4 retains the use of their durable Armor Aluminum alloy for the chassis that’s 10% tougher than standard aluminium alloys and also sticks with their unique Gorilla Glass Victus+ glass that’s specific only to Samsung issued phones covering the backplate and the front cover display. It also retains their respectable IPX8 rating which means that it’s able to survive in up to 1.5 metres of freshwater for up to 30 minutes which is something the competition is unable to even do yet. 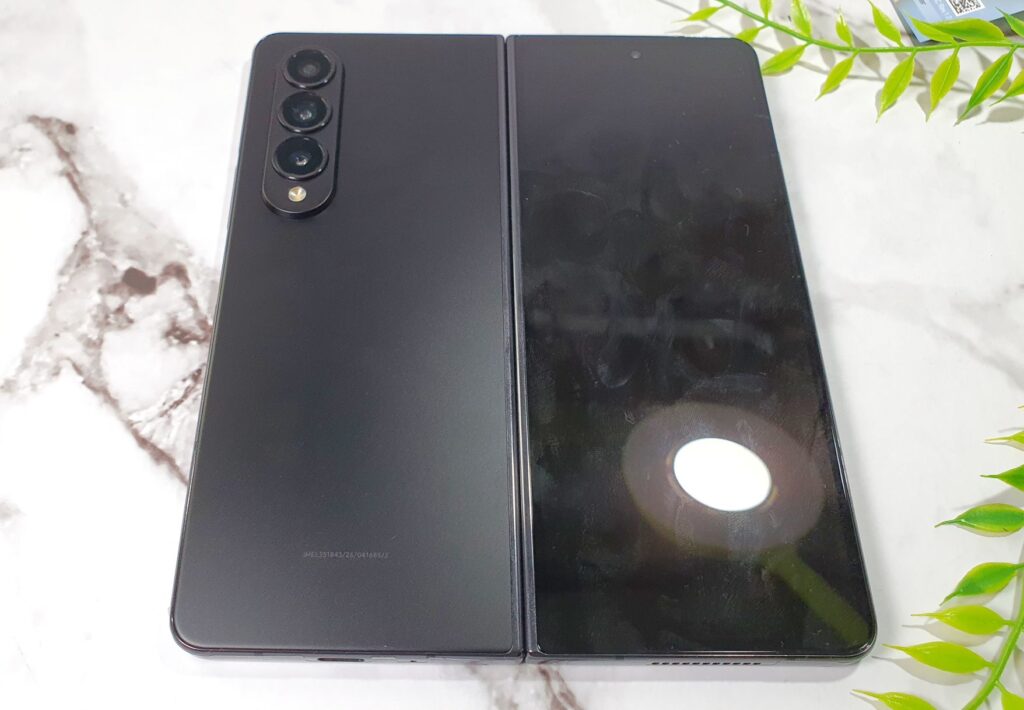 On closer inspection, our Samsung Galaxy Z Fold4 first look reveals a slightly wider, squarish aspect ratio for both the cover display and main folding display while retaining the same screen sizes by shaving down the bezels. It is also slightly thinner, wider, shorter and lighter than the older Galaxy Z Fold3, weighing in at 263g which is 8g lighter while being 0.8mm thinner when fully unfolded.

The phone is available in a variety of colourways that include a new shade of Graygreen, a creamy white Beige, an online-exclusive reddish shade of Burgundy and, in the case of our Galaxy Z Fold4 first look sample, a shade of Phantom Black. The matte black finish is able to resist fingerprints wonderfully and combined with its heft, lends it a delightful tactility and premium feel befitting its price tag.

When placed side by side, the Galaxy Z Fold4 has a noticeably slimmer and flatter hinge shield on account of the refined mechanism that reduces its side silhouette.

The base of the phone hosts a USB-C port along with a grille for one of the matching pair of stereo speakers with the other one symmetrically perched on the top half of the phone. There is also a less noticeable gap between the displays when folded down.

The right side hosts a volume rocker and, like its predecessor, features a power button that doubles as a fingerprint reader while the left hosts a dual nano SIM card port. 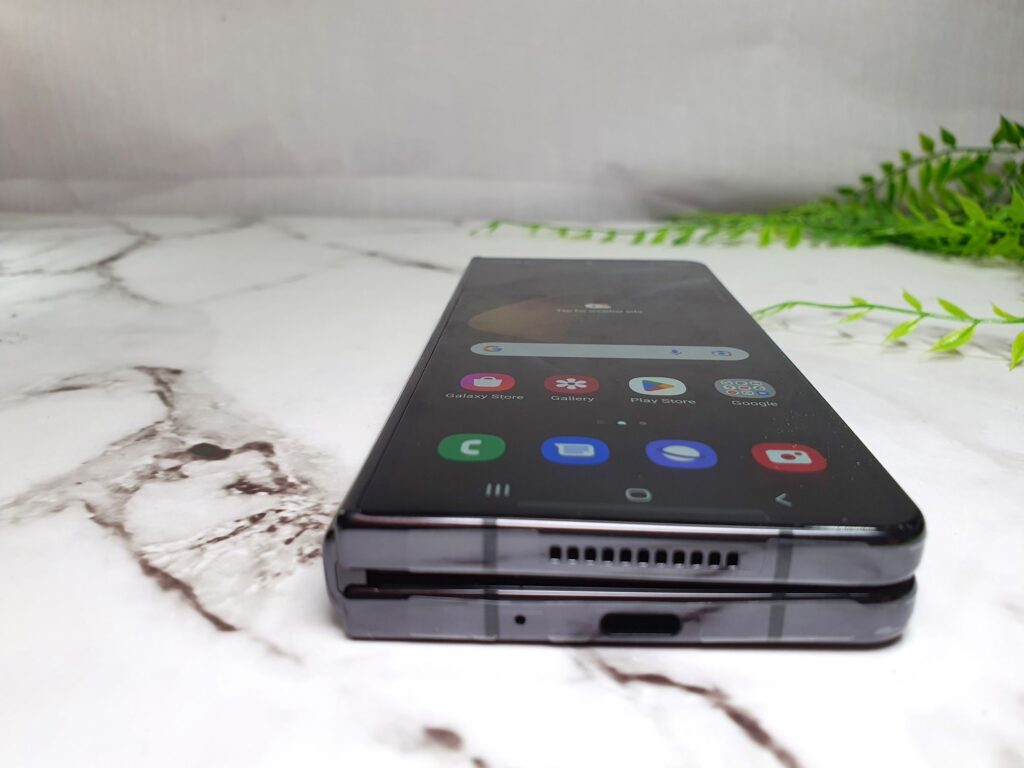 On the rear, the phone has a similar raised camera island as its predecessor though it has vastly improved hardware. Rather than the prior triple camera array that all used 12MP cameras, the new setup uses hardware culled from the Galaxy S22 and Galaxy S22+.

You get a primary 50MP F/1.8 camera with OIS and much larger 1.0µm pixels, a 10MP telephoto lens that also has OIS and 3x optical zoom as well as a 12MP F/2.2 ultra wide angle camera. In essence, you get improved low light capture, improved image quality, better telephoto zoom all the way out to 30x digital zoom and, best of all, 8K@24fps video capture. The older Galaxy Z Fold3 only maxed out at 10x digital zoom and 4K@60fps videos. 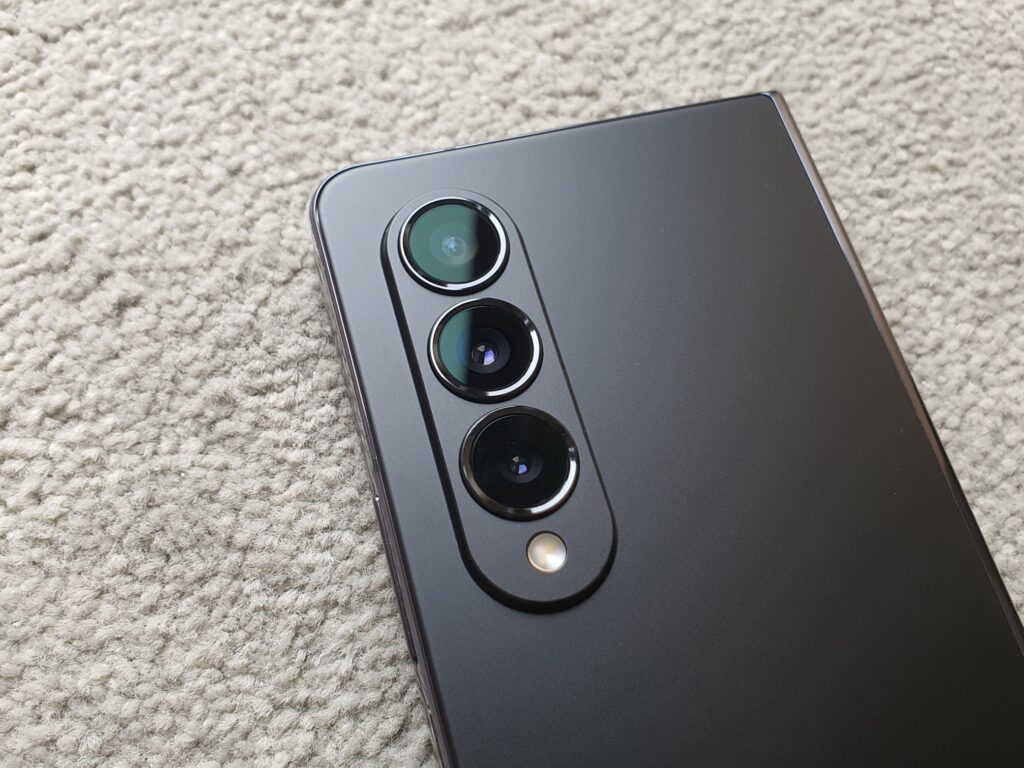 Up front, the phone hosts a 6.2-inch Dynamic AMOLED 2X cover display with a 120Hz dynamic refresh rate, a slightly higher pixel density of 904 x 2,316 pixels versus its predecessor and a wider 23.1:9 aspect ratio versus the older 25:9 in the Fold3.

In effect, you get a slightly crisper, wider screen which immediately addresses the quibbles in the Fold3 as the taller, narrower aspect ratio made it less practical for one-handed use. Located just above the display is a 10MP F/2.2 camera for video calls

Unfolding the Galaxy Z Fold4 is still a two-handed affair and the mechanism satisfyingly snicks open to reveal a 7.6-inch Dynamic AMOLED 2x display with a 120Hz refresh rate and more squarish  21.6:18 aspect ratio over the Fold3’s 22.5:18 aspect ratio. 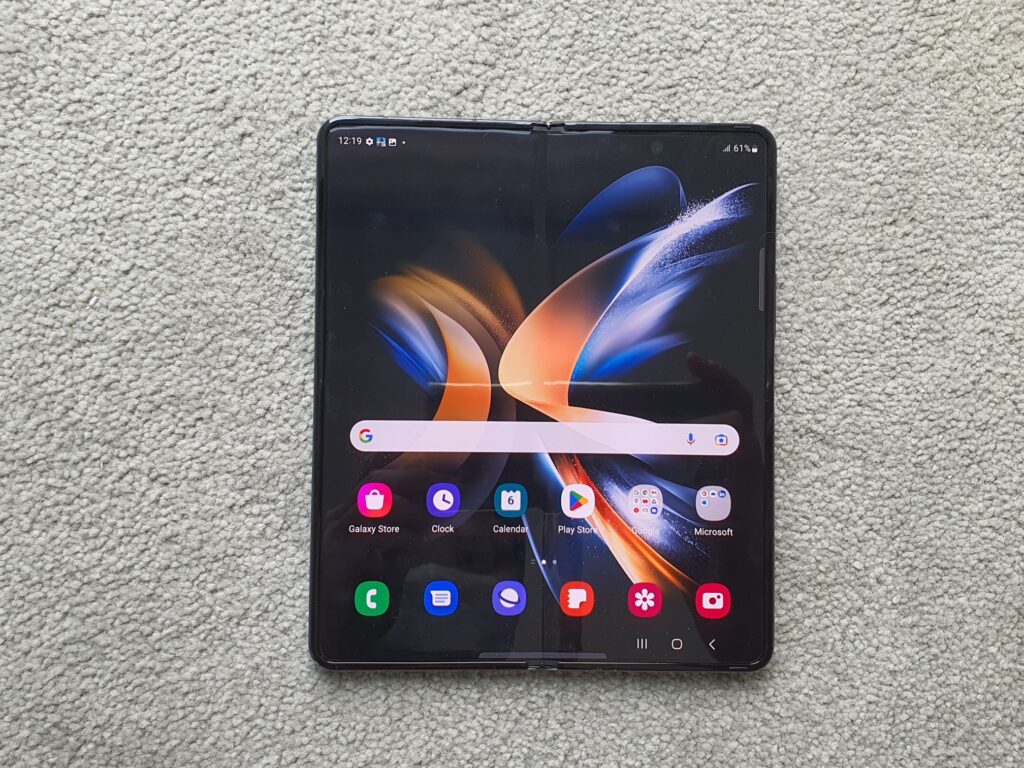 The 4MP under display camera retains the same performance but this time around they’ve managed to make it subtly less apparent than before with a denser array of pixels overlaying it.

By and large, it’s only visible if the screen is off or if you’re watching something with an overwhelmingly white background. There is still a crease in the middle of the screen but it’s less apparent with a shallower furrow where both halves fold together and it is almost invisible if you’re paying attention to something else onscreen. 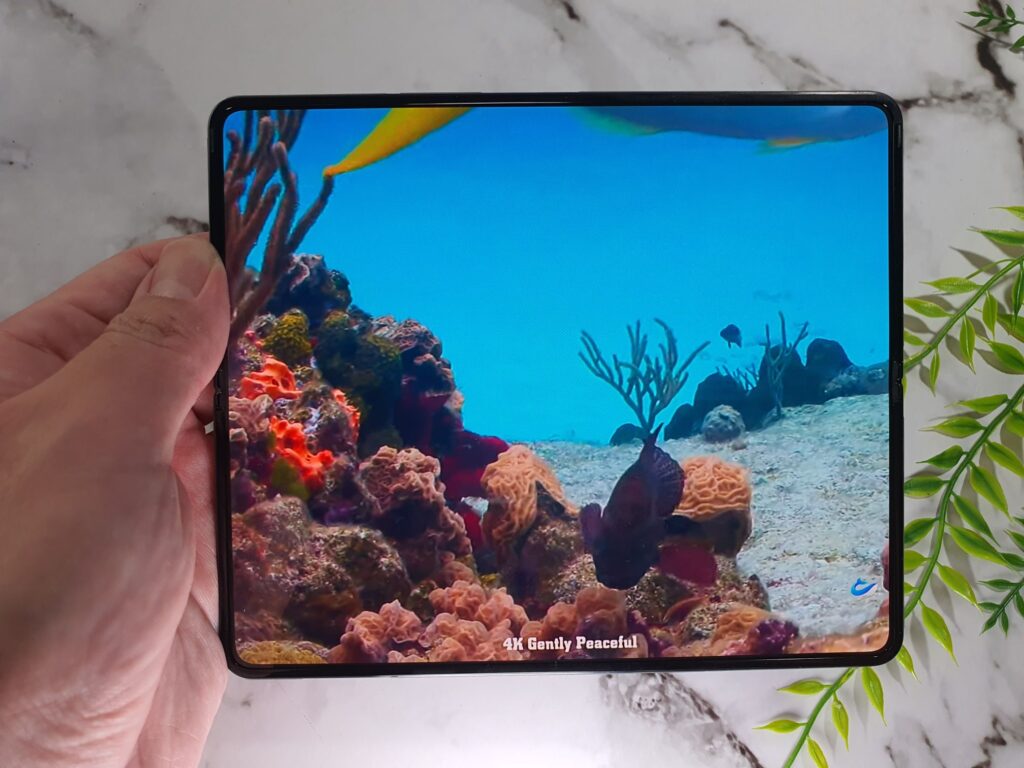 Where the Samsung Galaxy Z Fold4 retains a sizable lead over the competition is that it still has its vaunted Flex mode that lets it stand in a halfway folded up position that offers a host of additional benefits from acting as a stand for the cameras, for video calls and also for other apps which we’ll go into in our indepth Galaxy Z Fold4 review.

Under the hood, the Samsung Galaxy Z Fold4 runs the latest Snapdragon 8+ Gen 1 processor paired with 12GB RAM and comes with your choice of 256GB, 512GB and 1TB of storage. In the case of our Galaxy Z Fold4 first look sample, it comes with a modest 256GB of non-expandable storage.

For Malaysia, you can get the 256GB version for RM6,799, the 512GB version for RM7,299 and the online-exclusive only 1TB version for RM8,299 in your choice of Phantom Black, Beige and Graygreen though the 1TB is only available in Graygreen. You can also acquire a Burgundy variant as an online exclusive at the Samsung Malaysia website but it only comes in a 256GB variant.

Here’s how the hardware stacks up under the hood:

Android dubbed Android 12L that has a number of UI improvements and refinements specific to large screen devices like tablets and foldables. At a glance, Android 12L offers easier multitasking with a taskbar at the bottom of the screen that lets you drag and drop up to 8 bookmarked apps to easily enable split-screen mode.

Samsung Galaxy Z Fold4 First Look – How does it handle?

For those used to Samsung’s OneUI user interface and their ecosystem, transferring over to the Galaxy Z Fold4 is as easy as it gets. The Samsung Smart Switch app easily transferred everything including apps and stored messages and texts over to the new phone and there’s relatively little change in terms of the user interface to warrant a look at the help page.

While I’ve only enjoyed a scant few days of use, the more efficient Snapdragon 8+ Gen 1 CPU seems to noticeably offer improved endurance and standby times along with gratifyingly swift performance. 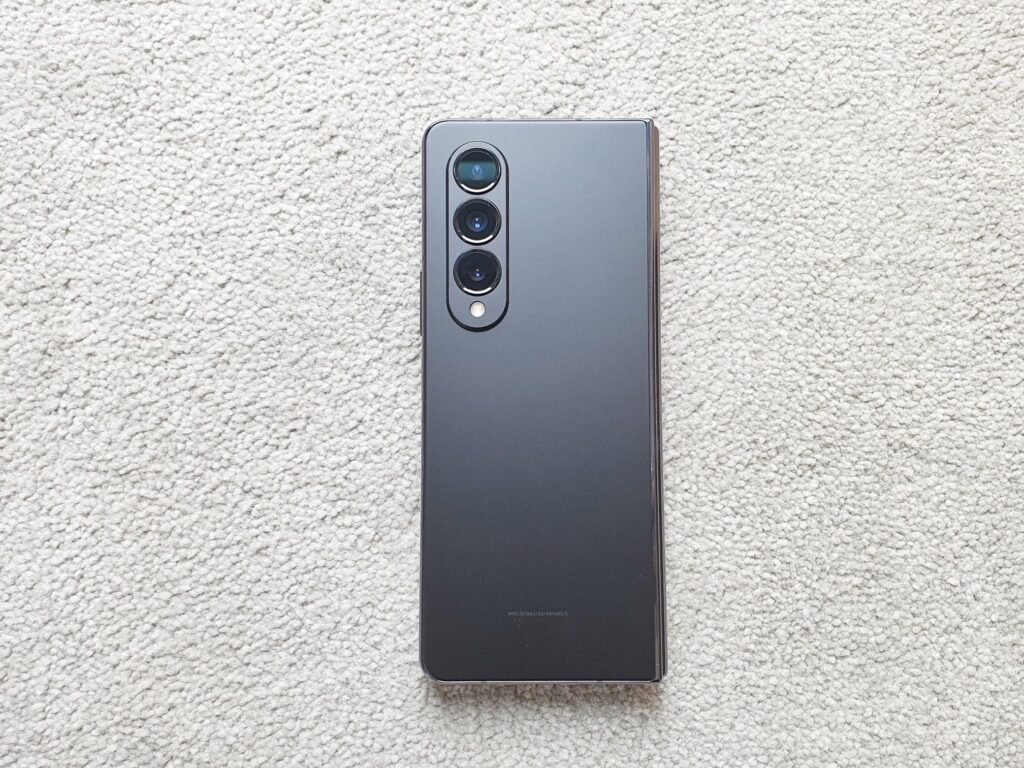 The rear triple camera finally give the Fold series. truly flagship worthy imaging capabilities after giving it a quick whirl around the block in daytime and low light shots. The minor savings in weight aren’t immediately apparent just yet after a few days toting it about but we’ll elaborate on it in more detail in our Galaxy Z Fold4 review in the near future.