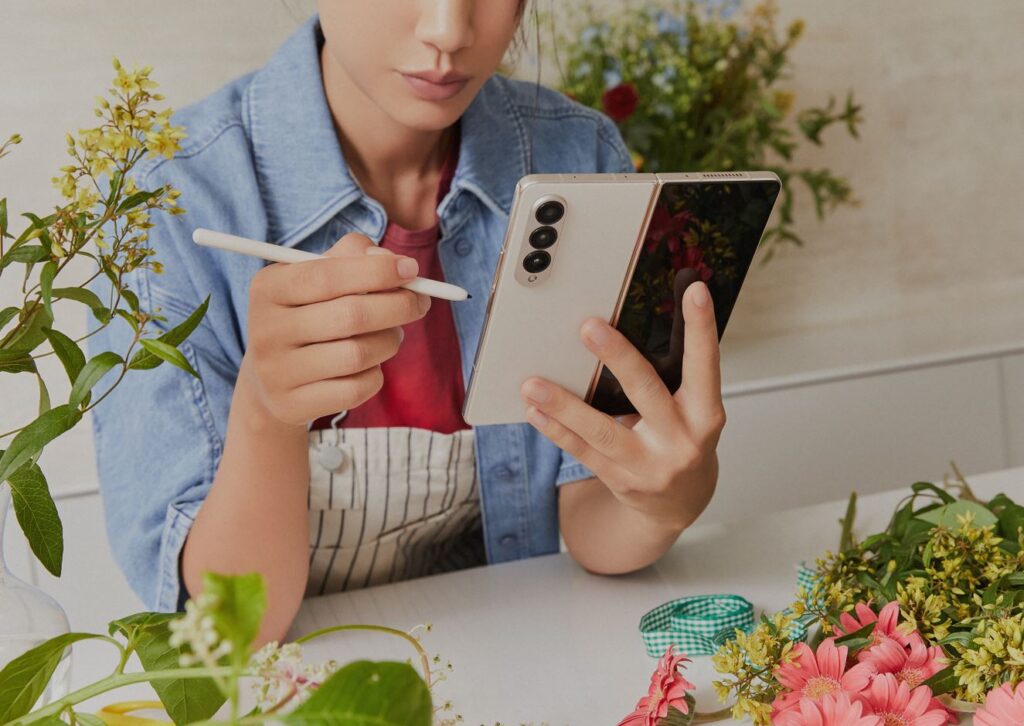 When you mean business, whether you’re an aspiring start-up entrepreneur or an established high-flying executive, you need a phone that’s reliable, powerful and secure; qualities that the new Samsung Galaxy Z Fold4 embodies in every aspect of its design.

Built from the ground up as the direct successor to the Galaxy Z Fold3 that was released last year, the fourth generation Galaxy Z Fold4 foldable features a book-form form factor with a front cover display with dimensions akin to a contemporary smartphone as well as a folding main display that unfolds to reveal a generous tablet-sized touchscreen with S Pen stylus functionality. 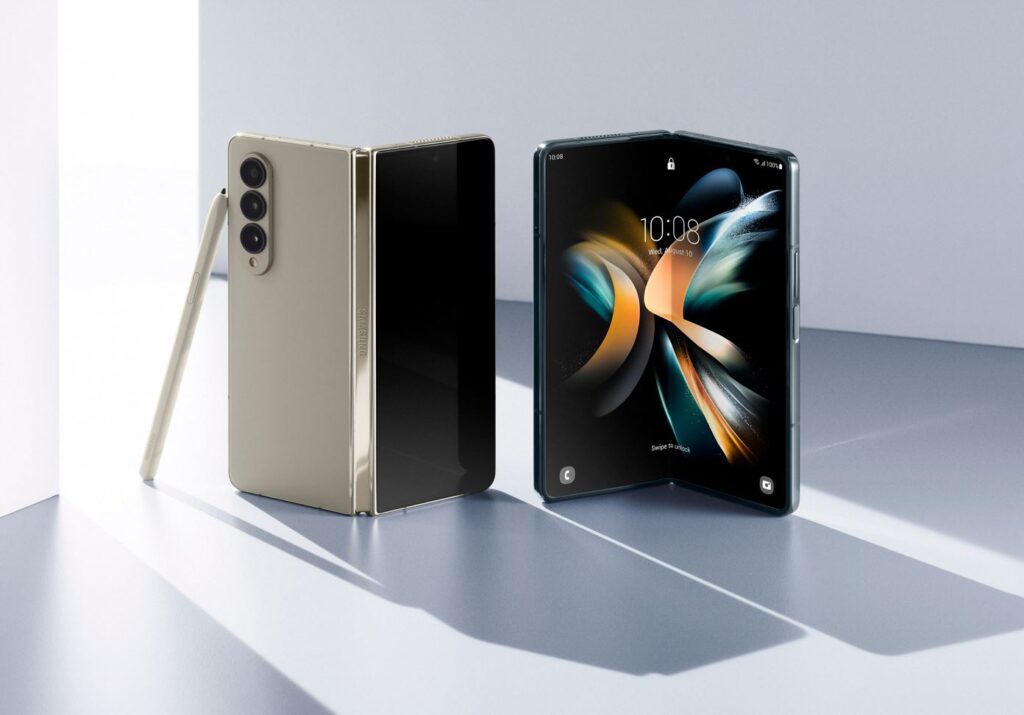 Every aspect has been improved in a staggering variety of ways from its build and design all the way to its user interface that make it the ultimate choice for power users. Here’s 4 reasons why the Galaxy Z Fold4 is one of the best business phones of 2022.

Samsung Galaxy Z Fold4 – Durable, water resistant chassis for those on the go

The Samsung Galaxy Z Fold4 uses tough Armor Aluminum for the frame which is 10% tougher than the standard aerospace-grade aluminum which makes it more resistant to dings and dents that a go-getter would encounter in the average work day.

To ensure additional protection, the phone also has Corning Gorilla Glass Victus+, a tougher grade of glass unique to Samsung-issued gear that sheaths the front cover display and backplate that has been made more resistant to scratches and nicks. 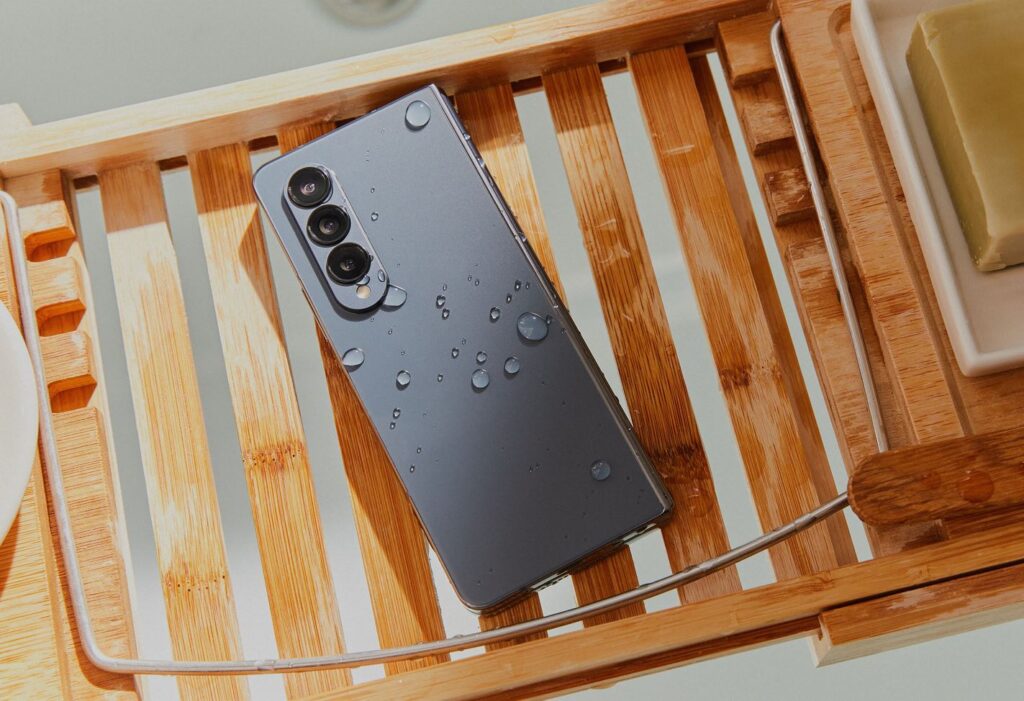 That’s not all, the Galaxy Z Fold4 also has a vaunted IPX8 water resistance rating which means that it’s able to survive immersion in up to 1.5 metres of freshwater for up to 30 minutes, which ensures that it’s able to shrug off sweat, the odd shower or two and an impromptu dip in the pool without issue.

Built from the ground up as the ultimate multitasking mobile device, the Samsung Galaxy Z Fold4 features the latest tablet-optimised OneUI 4.1.1 user interface and the Android 12L firmware that offer a wealth of interface tweaks that take maximum advantage of its large main display and unique form factor.

Better yet, it has the ability to run multiple different applications simultaneously on its spacious main 7.6-inch 120Hz Dynamic AMOLED 2X folding display.

Selecting apps for multitasking is as easy as it gets – a taskbar at the bottom of the screen lets you drag and drop apps to open them onscreen with the ability to open up to 3 apps in multi window mode and even more as pop-up apps. Users can even save their favourite app selections for even faster deployment with the App Pair shortcut feature. 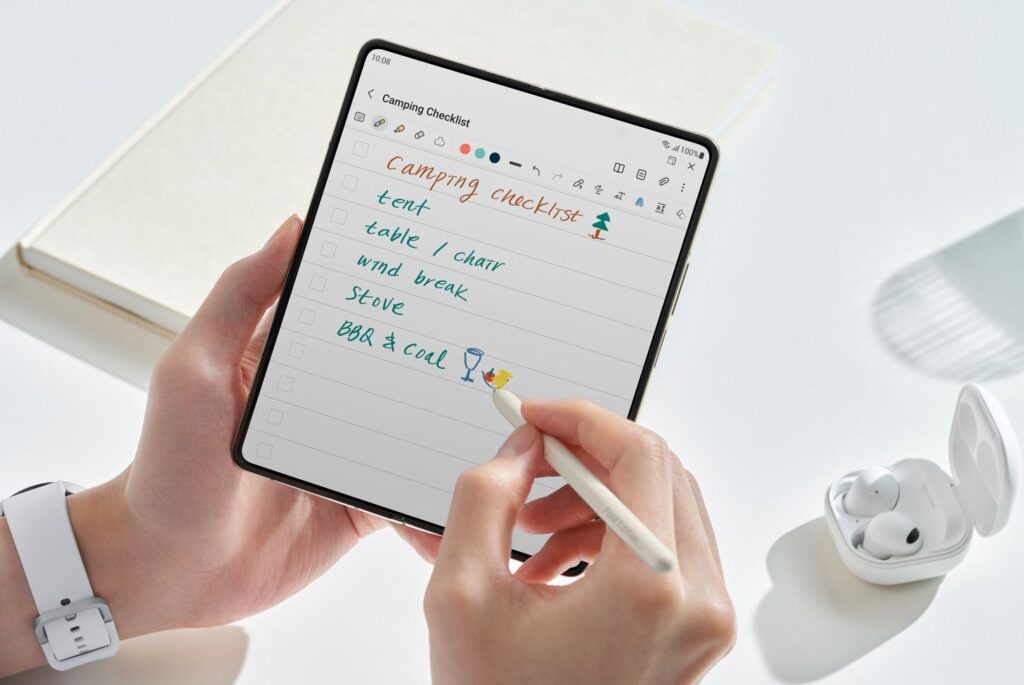 The Galaxy Z Fold4 also lets you drag and drop essential content from one windowed app to another like images and snippets of text  as circumstances dictate such as copying an address from an email to pass into your Whatsapp chat window. If you’ve ever wanted to compare spreadsheets, answer your email and get a work call done, all at the same time, on your phone – the Galaxy Z Fold4 is the sole means to do so on the go in style.

The Samsung Galaxy Z Fold4 comes with the powerful Snapdragon 8 Plus Gen 1 processor that is built on a power efficient 4nm process. This is paired with 12GB RAM with the ability to assign up to an additional 8GB vRAM from onboard storage as well as fast WiFi 6E, 5G and Ultra Wideband (UWB) connectivity.

To ensure excellent endurance and fast charging, the Galaxy Z Fold4 has a large 4,400mAh battery with 25W fast wired charging and 15W fast wireless charging. For 2022, Samsung is offering the Galaxy Z Fold4 with up to 1TB storage which is plenty of storage for documents, files, folders, presentations and much more. 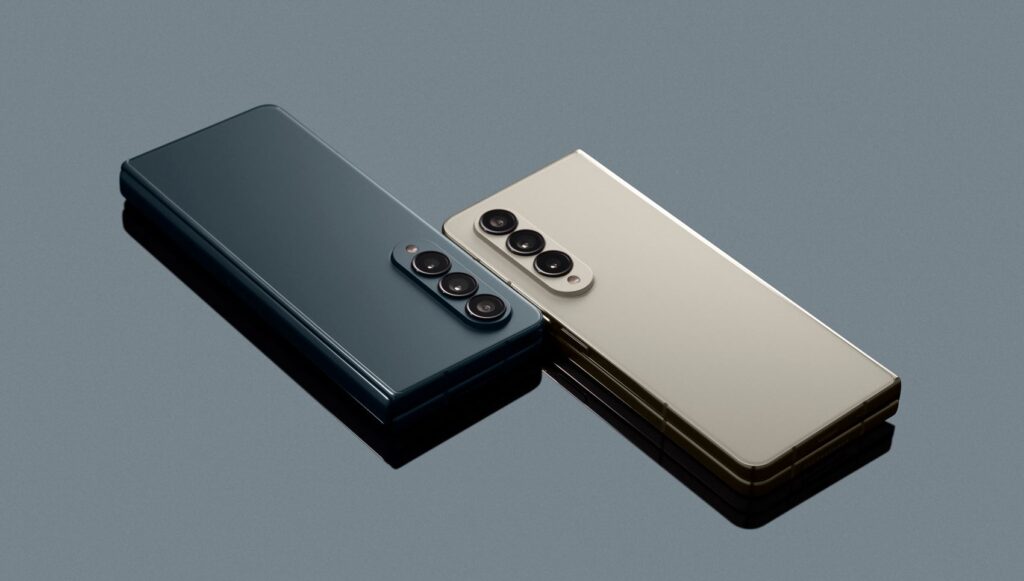 Storing sensitive information on mobile devices is always a security concern but the Galaxy Z Fold4 offers peace of mind especially for business concerns as it features their comprehensive defence-grade KNOX protection that uses rigorous security down to the hardware level to protect data from malicious threats and allow IT departments to easily manage large fleets of devices in the field.

Video calls are part of the new normal and busy executives can’t be tethered to a heavy laptop or an office but the Galaxy Z Fold4 makes videoconferencing on the go a cinch. The phone features a potent array of cameras including a front-facing 10MP cover display camera, a 4MP under display camera and a triple rear camera array akin to those used in the Galaxy S22 and Galaxy S22 Plus. 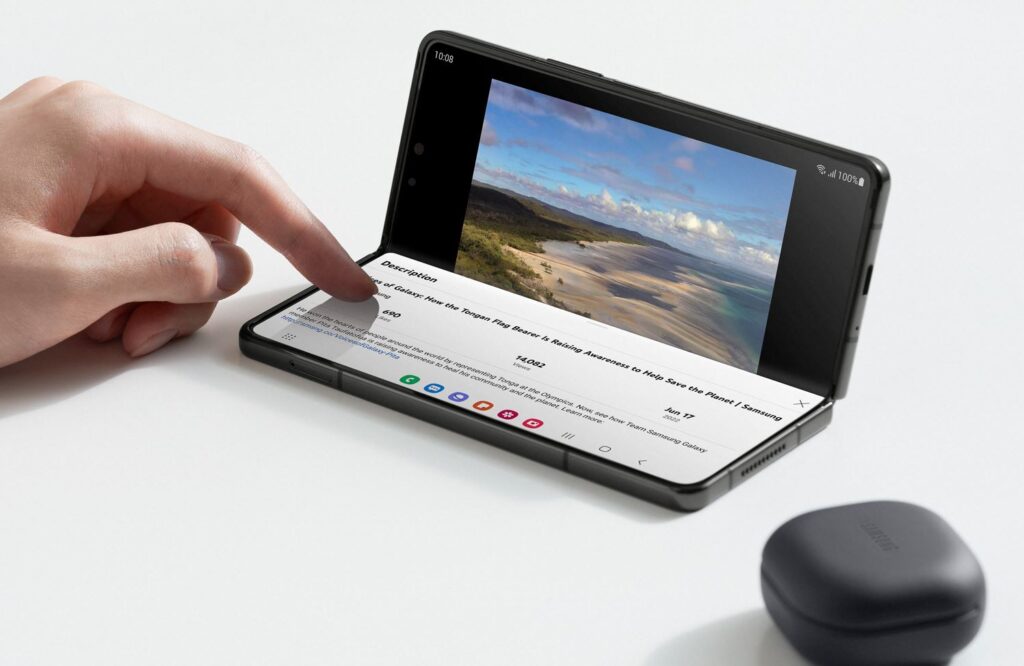 What makes the Galaxy Z Fold4 unique in this aspect is its innovative Flex mode that lets you deploy it on any flat surface, fold it up halfway and kick off a video call anywhere, anytime without the need to tote around a heavy laptop or a bulky stand. Better yet, the Galaxy Z Fold4 also has support for an optional S Pen that you can use to take notes and even better, act as a remote control for presentations and as a shutter release for the camera.

Where to buy the Samsung Galaxy Z Fold4 in Malaysia?

The Samsung Galaxy ZFold4 is available in Malaysia priced at RM6,799 for the 256GB model, RM7,299 for the 512GB model and RM8,299 for the 1TB model. For a limited time, buying any storage variant of the Galaxy Z Fold4 nets you a free Galaxy Watch4 worth RM799 and a Samsung Care+ 1 year extended warranty programme. 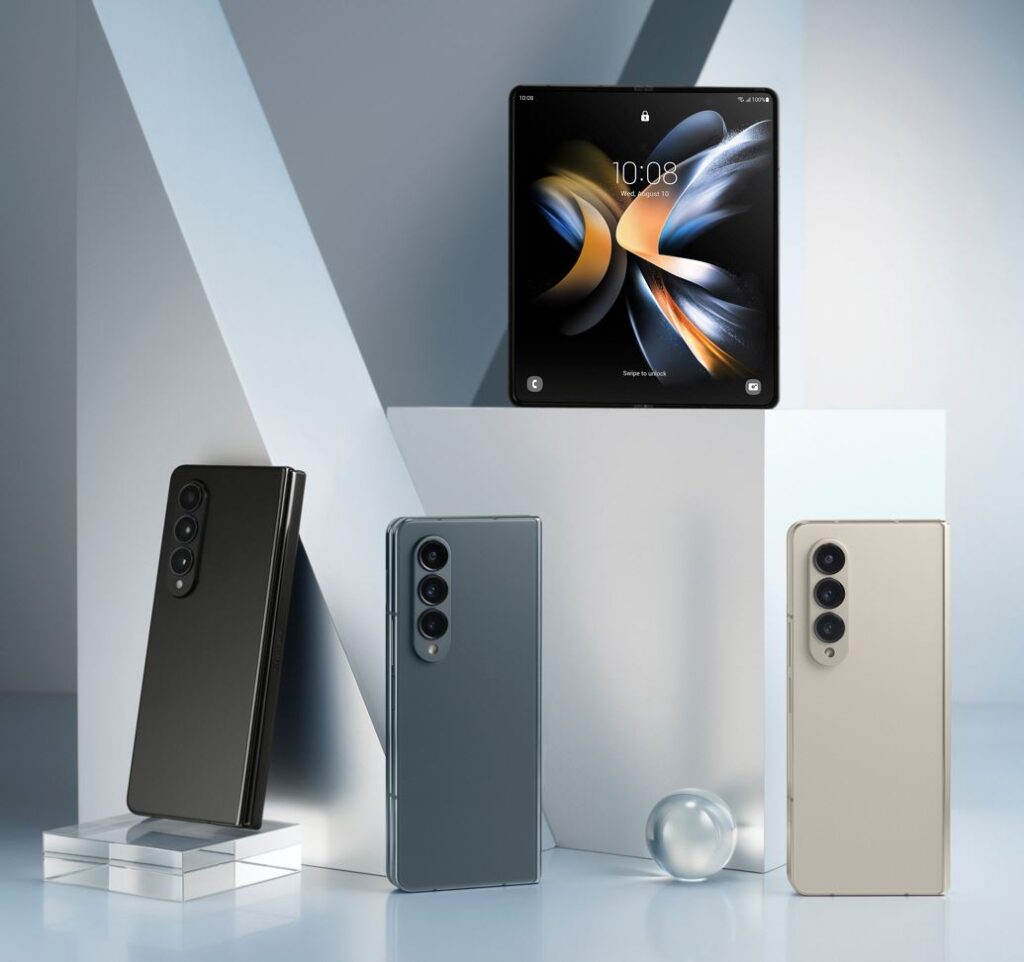