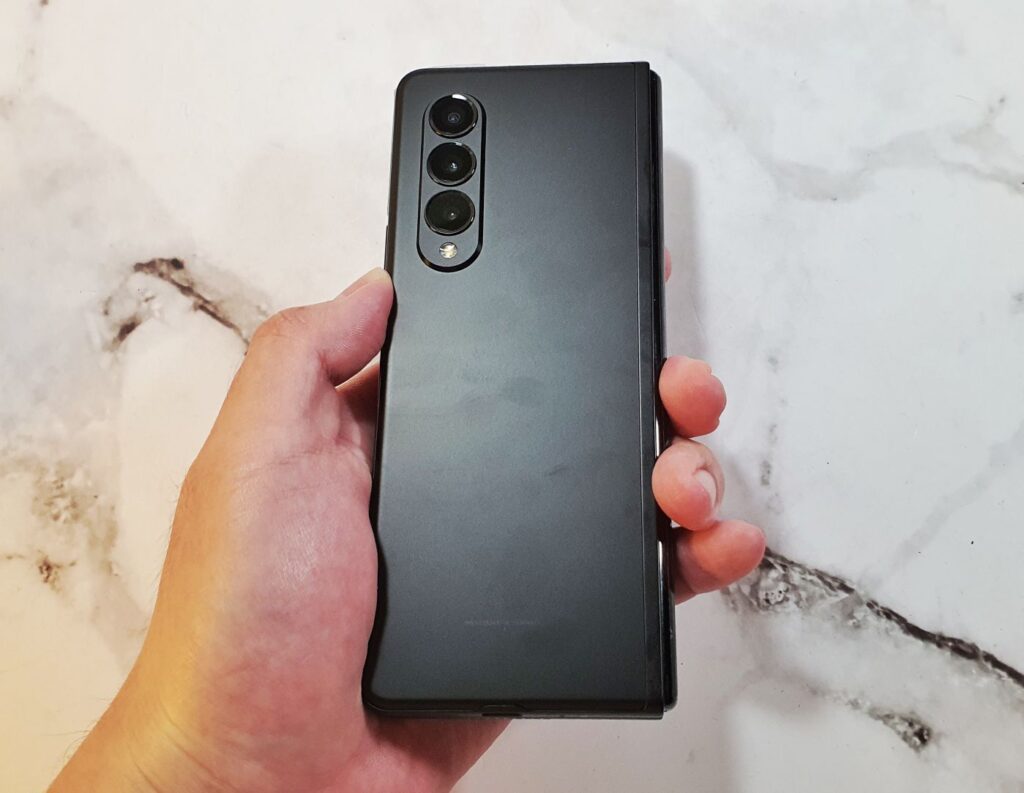 The Samsung Galaxy Z Fold3 launched in August 2021 last year was a watershed moment that showed the world that not only could foldable phones be made practical, they offered capabilities that a conventional candy bar shaped phone would be hard pressed to match. Hitech Century got our hands on the Samsung Galaxy Z Fold3 at launch and have been using it since as a primary phone on a daily basis.

At launch, the Galaxy Z Fold3 packed a top of the line Snapdragon 888 processor with a 5G modem, 12GB RAM and up to 512GB of storage. The regular firmware updates have allowed the phone to remain current with it running the latest Android 12 with their latest OneUI 4.1 user interface as of August 2022. One year later, the phone hasn’t slowed down or lagged in the least and is still as swift, nimble and responsive as it was the day it rolled off the production line for everything asked of it from editing videos on CapCut to sorting out tracts of paperwork.

The main foldable 7.6-inch display makes multitasking a cinch as I can display up to 3 windows or apps simultaneously onscreen and even if I’m just solely poring through emails or writing a document on one app like Google Docs or Gmail, I have more than enough screen real estate to afford a virtual keyboard to type in relative comfort with both hands. With both hands typing away, I found it easier to finish writing pieces and sorting out serious work. 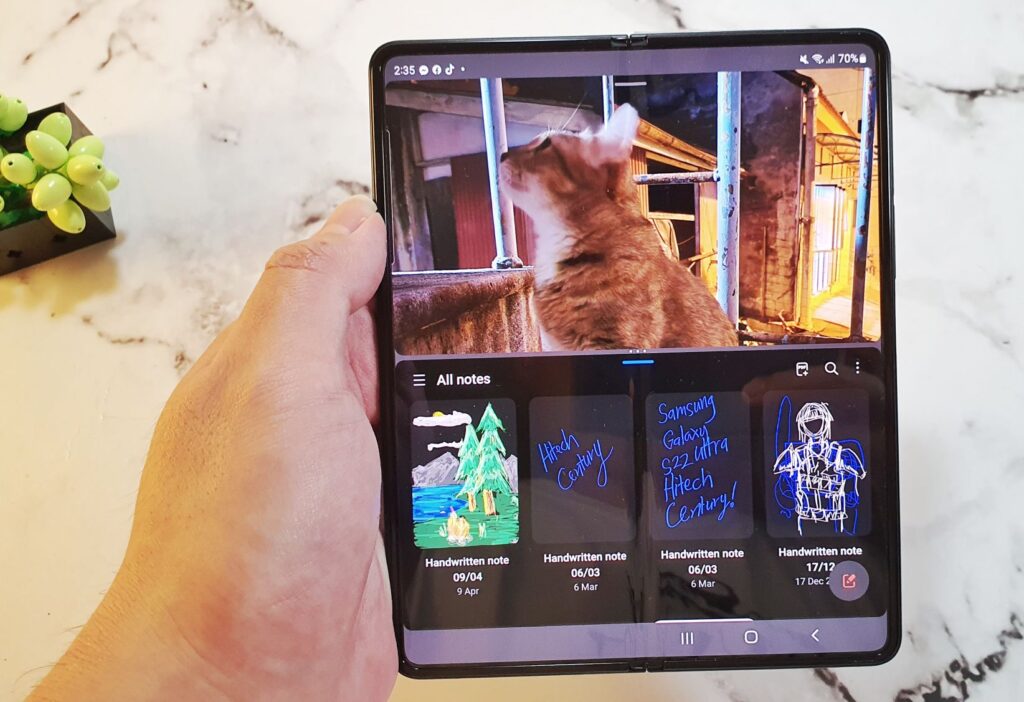 Having a screen larger than 7-inches was once a luxury only afforded to tablets but the Galaxy Z Fold3 manages to shoehorn it into a form factor little larger than a conventional smartphone. Having a smooth 120Hz refresh rate also makes viewing content and working on it a joy too.

As the age-old adage goes, crap happens. The inclusion of Gorilla Glass Victus+ on the backplate and front display and Samsung’s use of their new Armor Aluminum material to form the chassis mean that the Galaxy Z Fold3 is remarkably resistant to nicks and, on paper, drops to a certain extent. 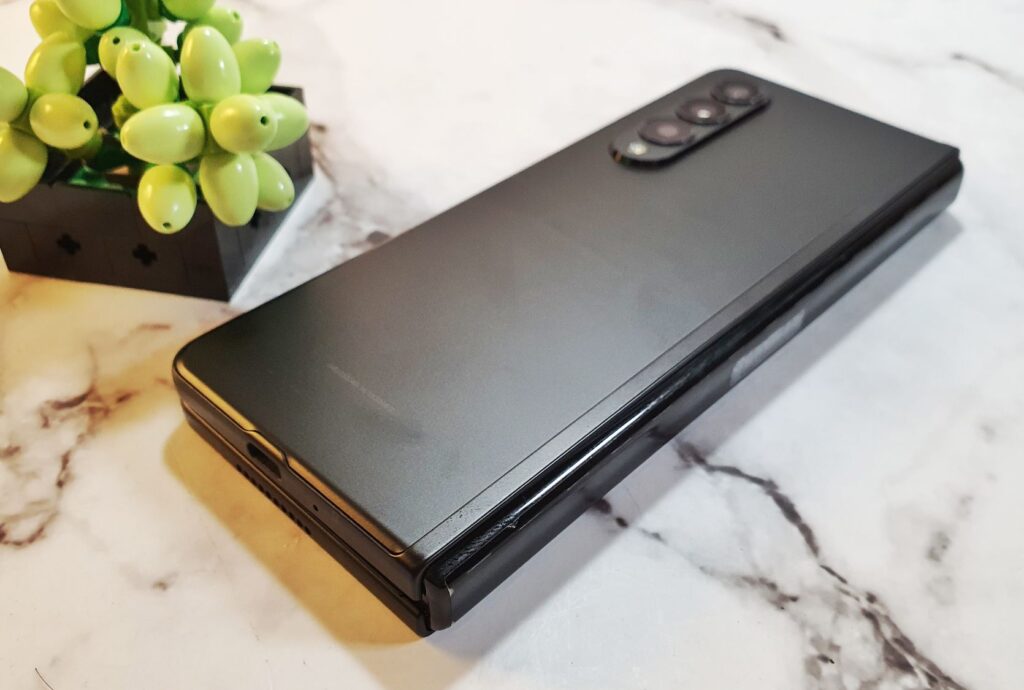 They’ve also ensured the hinge is sufficiently robust with an armoured outer protective plate along the spine. Even after extensive usage after a year, the screen has remained remarkably nick free along with the chassis. While I’ve yet to fully test its survivability against misadventure, it has survived a drop to the ground without damage from pocket height due to an inadvertent fumble.

What makes it immensely practical though is that the phone has IPX8 water resistance which means that it’s able to shrug off Malaysia’s typical impromptu rain showers and survive being jostled around in a pair of hot and sweaty jeans in humid weather. The internal workings of the hinges also have an anti corrosive coating too which gives me the ability to use the phone with confidence on a daily basis without having to coddle it around. Unfortunately the lack of a dust protection rating precludes trips to the beach but I burn easily anyway.

One of the key features of the Samsung Galaxy Z Fold3 is its unique Flex mode which allows you to use the phone in a halfway folded up mode with selected apps reorienting to fit the folded display. Unfortunately, not all apps work with Flex mode bar a select pool and having more would be welcome but it’s still early days in terms of foldable optimised apps so it’s simply a matter of time. 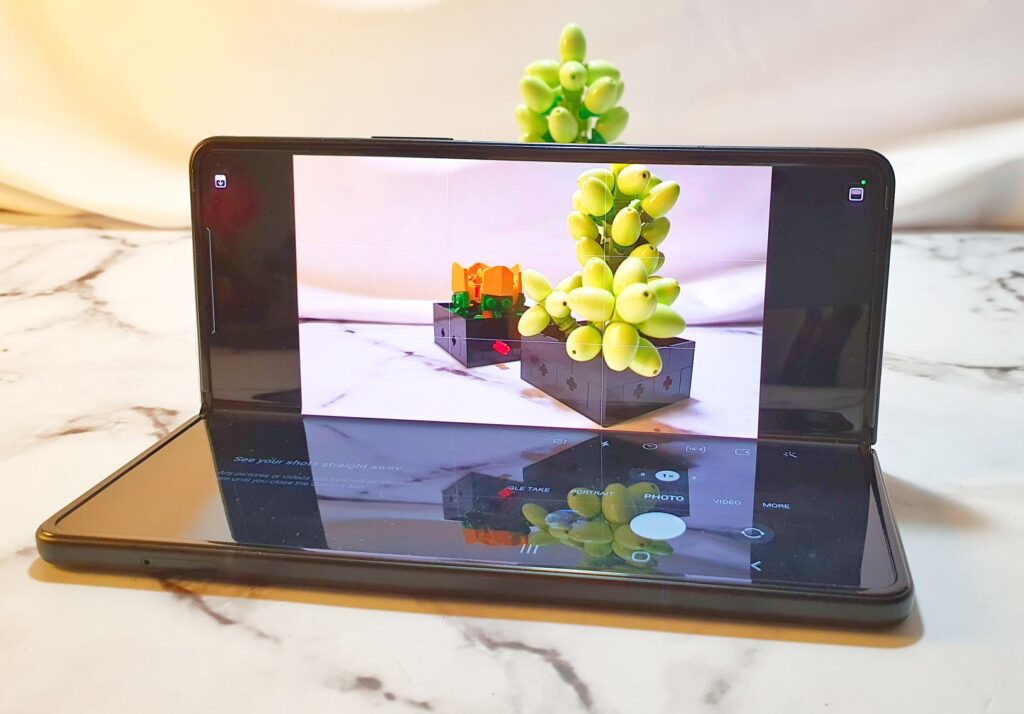 Samsung Galaxy Z Fold3 One Year Review – Over time, the use of Flex mode becomes second nature and is incredibly handy for video calls, taking photos and for hands-free movie watching.

Where Flex mode pulls its own weight is when it’s used for video calls. For video calls using the under display camera, Flex mode is a lifesaver rather than having to precariously prop the phone up on a book or a coffee mug. New creative opportunities also appear when using the rear cameras in Flex mode as it makes it easier to capture time lapse shots and group photos in lieu of a tripod. In either case, I have my hands free to perform other tasks.

Flex mode also proves to be handy for browsing through the phone’s Gallery app and for watching YouTube videos without having to hold the phone in both hands.

All this wouldn’t have been possible if not for Samsung’s emphasis on building a superior, dependable and robust hinge mechanism. In that regard, the Galaxy Z Fold3’s hinge is built like a tank and even over the course of a year, it hasn’t faltered, flopped or wobbled at all which is a testament to its build quality.

Cover Screen is A Bit Small

The front-facing 6.2-inch cover display is intended for tasks like checking notifications, emails and sorting out quick tasks like texts. Over the course of my Samsung Galaxy Z Fold3 one year review, I found that unfolding the phone is a two-handed task and often all I have is just a single hand to spare to text a reply or answer an email which means having to use the cover screen. 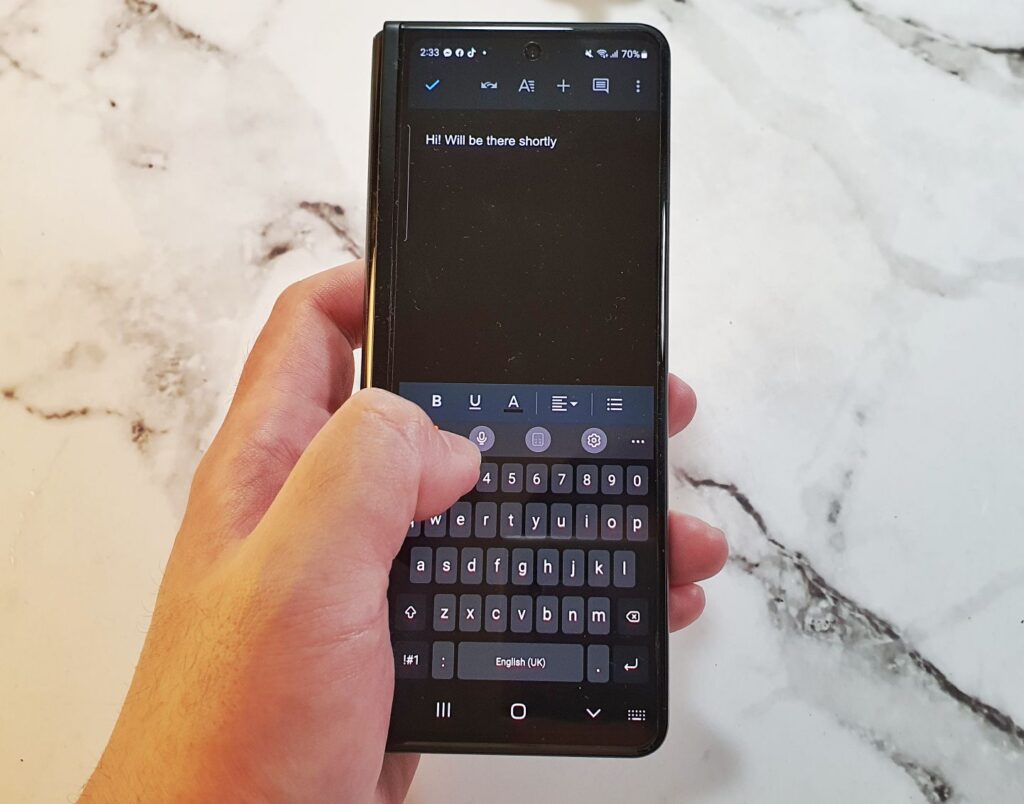 Samsung Galaxy Z Fold3 One Year Review – The front cover screen is useful for notifications and tackling short texts but is a bit of a chore to text with especially for those with large hands.

In that regard, it’s serviceable but the tall, narrow dimensions means that I’m often prone to typos as the virtual keyboard has tiny keys that require a delicate peck to get right; somewhat of a challenge if you have large hands. Hopefully, future successors to the Fold series have a wider cover screen to allow for more efficient one-handed use.

Cameras Are Good But Could Be Better

Over the course of my Samsung Galaxy Z Fold3 one year review, I found that the front and rear cameras were competent with good overall performance but pale in comparison to dedicated camera phone flagships like the Galaxy S22 Ultra especially in regards to low light performance and extended telephoto capabilities. The modest 4MP under display camera does look aesthetically pleasing by being almost invisible on the display but it still needs good lighting for video calls. 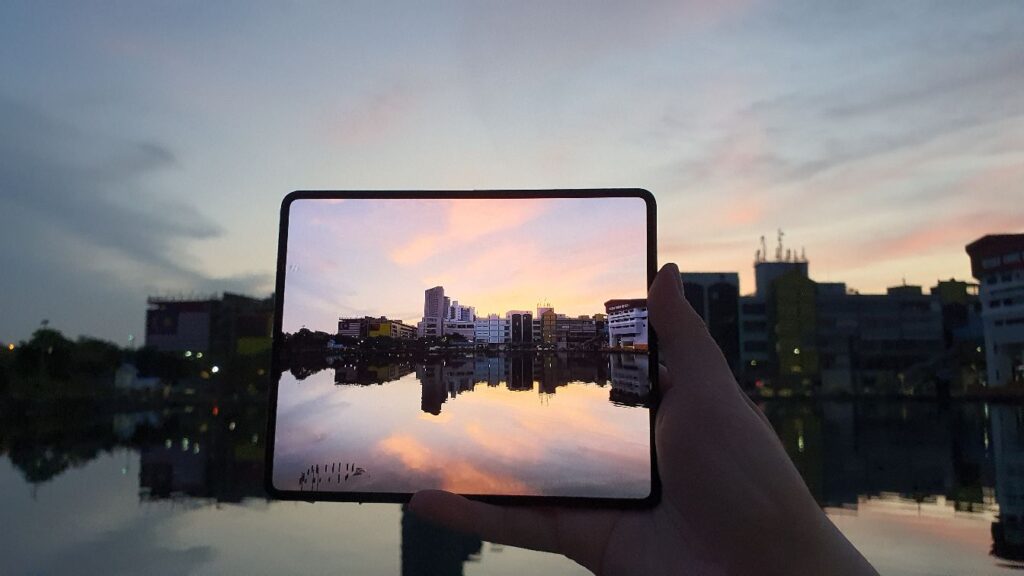 Granted, it’s an apples to oranges comparison seeing as the unique design of the Fold3 means that cramming in the sophisticated optics and zoom of a proper full sized camera array would be a challenge but hopefully the next generation of cameras in foldables would have better low light performance and longer zoom distances.

The phone features a 4,400mAh battery with 25W fast charging support which is decent as flagship phones go but hardly stellar. In the course of my Samsung Galaxy Z Fold3 one year review I’ve had varying results in terms of endurance by tinkering around with screen brightness as well as frequency of usage of both the cover and main display.

On days that involved liberal use of the main display at auto brightness settings without involving gaming and just pure paperwork, I’ve needed to use a power bank or find a charging point by early evening. On days of very modest use with mostly the cover display and little use of the main display, I’ve managed to eke out a full day of use with about 15% left on the return trip home.

This isn’t considered bad by any means but having more efficient battery standby times and endurance would have been fantastic. On the bright side, the phone still retains consistent battery life and endurance even over the course of a year without massive drop-offs or degradation in battery life which is quite a feat.

Samsung Galaxy Z Fold3 One Year Review – Worth Buying in 2022?

In our prior review, we’ve concluded that it’s one of the most powerful and innovative foldable phones available in the market and one year on in, it’s been the standard to beat though a plethora of contenders have trickled into the local market.

While anyone can cobble together hardware together into a facsimile of a foldable phone, it takes a sufficiently large and committed smartphone manufacturer to be able to dedicate not two or three but a whopping four years worth of OS updates and five years of security updates to a phone. 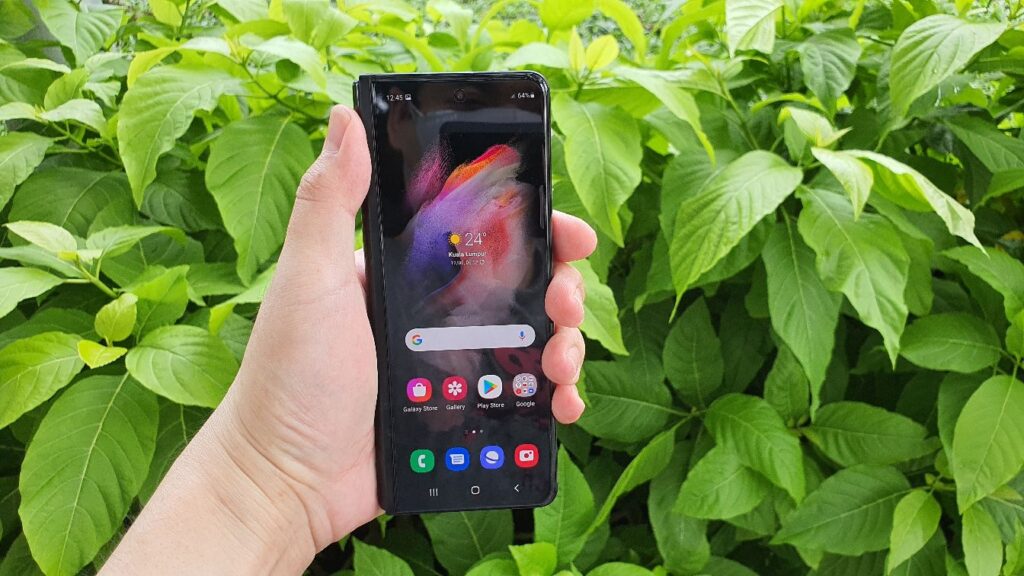 That means that the Galaxy Z Fold3 is an investment that will last you at least half a decade down the road and then some. At this point in time, the Galaxy Z Fold3 is still the de facto foldable phone of choice and the standard by which other foldables are matched against. While the launch of its next generation successor is nigh, it still remains a potent offering in its own right even in 2022. As of now, the Fold3 is still available for purchase on Samsung Malaysia’s official page here.