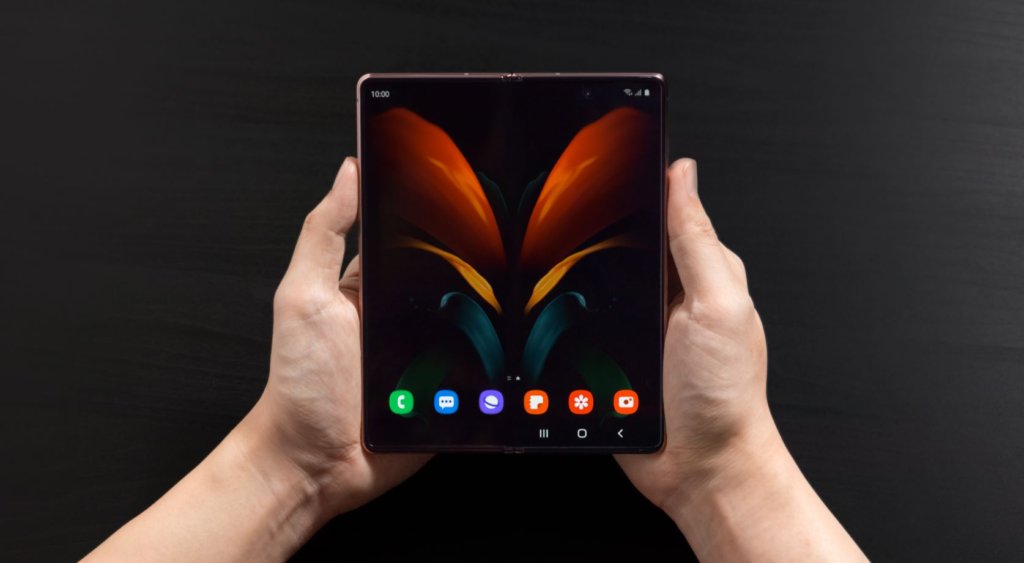 The foldable phone was glimpsed in a series of leaks as well as a quick sneak peek at Unpacked 2020 where Samsung launched the Galaxy Note20 series phones several weeks ago.

The basic form factor of the Galaxy Z Fold2 doesn’t deviate too far from the original Galaxy Fold released last year. Rather than reinventing the wheel, they’ve refined the design, improving every aspect from the hardware to the external chassis and user experience after factoring in feedback and lessons learned from the original Galaxy Fold and the recently released Galaxy Z Flip. 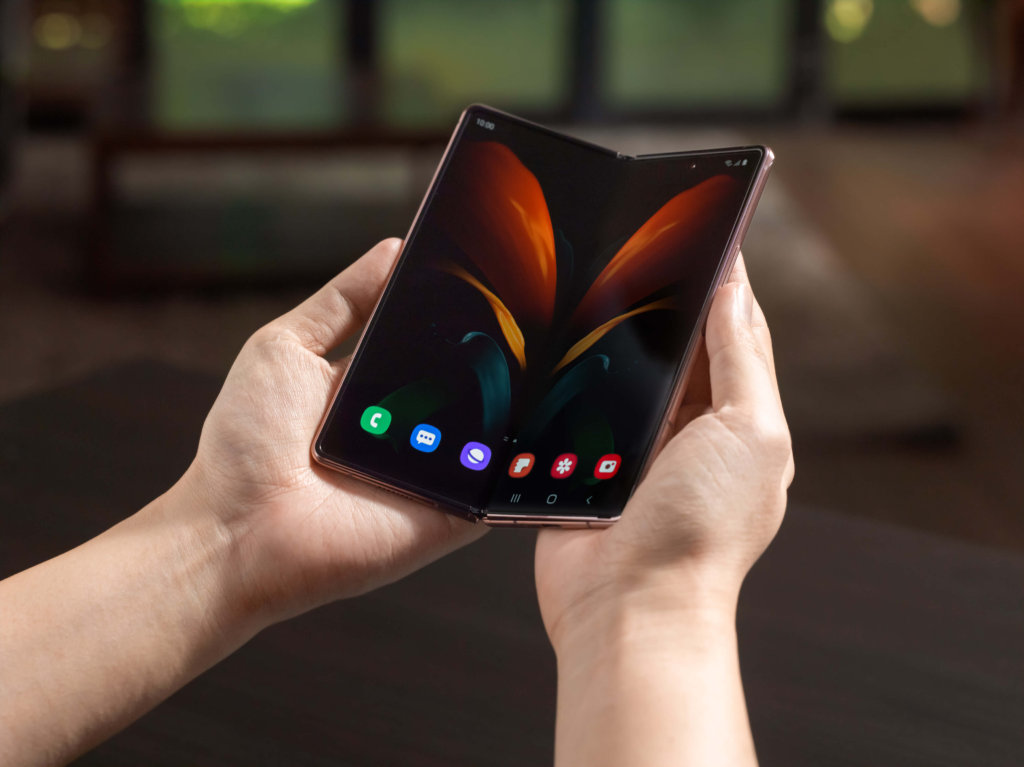 Like the original Galaxy Fold, the Galaxy Z Fold2 features a large foldable display that folds inwards with a large Cover Display up front but they’ve implemented an array of improvements across the board to make it a superior device compared to its predecessor with several features that take advantage of the foldable display that were fielded on the Galaxy Z Flip launched earlier this year.

As far as specifications go, this is a step up from the older Galaxy Fold with both a larger main display and outer Cover Display and general improvements for the processor, hardware and cameras alike.

They’ve refined the external chassis and it’s slightly slimmer overall but a bit heavier. Where the original was 17.1mm thick on the hinge area, the Galaxy Z Fold2 is 16.8mm which is about 0.3mm thinner and 13.8mm thin on its thinnest edge (the Fold was a chunky 15.7mm). 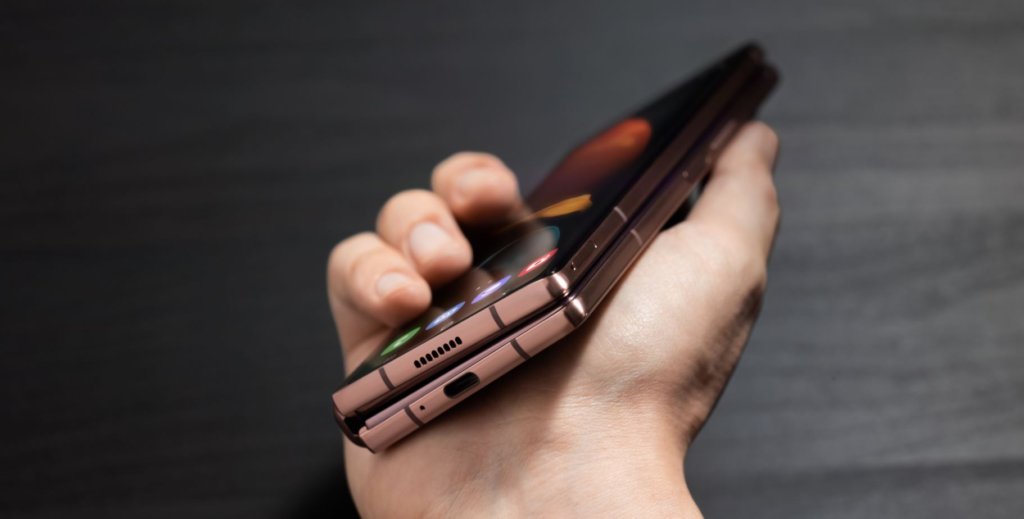 One thing that didn’t slim down though is the rear camera bump as they’ve enlarged it on account of the upgraded cameras to become a huge squarish housing on the back. While it’s slimmer overall , the new Galaxy Z Fold2 has one major tradeoff. It’s 19g heavier than the original Galaxy Fold at 282g.

At launch, the Galaxy Z Fold2 will only have one processor variant –  the Qualcomm Snapdragon 865+ processor paired with 12GB RAM and either 256GB or 512GB of non-expandable UFS 3.1 memory as well as 5G connectivity baked-in with WiFi 802.11ax and Ultra Wide Band.

The camera on the front and the one on the inner display are both identical with a 10MP sensor while the large primary rear camera is a triple camera setup with a trio of 12MP cameras.

One 12MP camera has an ultra wide angle lens, another has Dual Pixel and OIS for general work and another has 2x telephoto zoom and OIS. This setup allows for you to take up to 10x digital zoom for snaps on demand and the cameras also have a Pro Video and Night mode like that seen in the Note20 series. 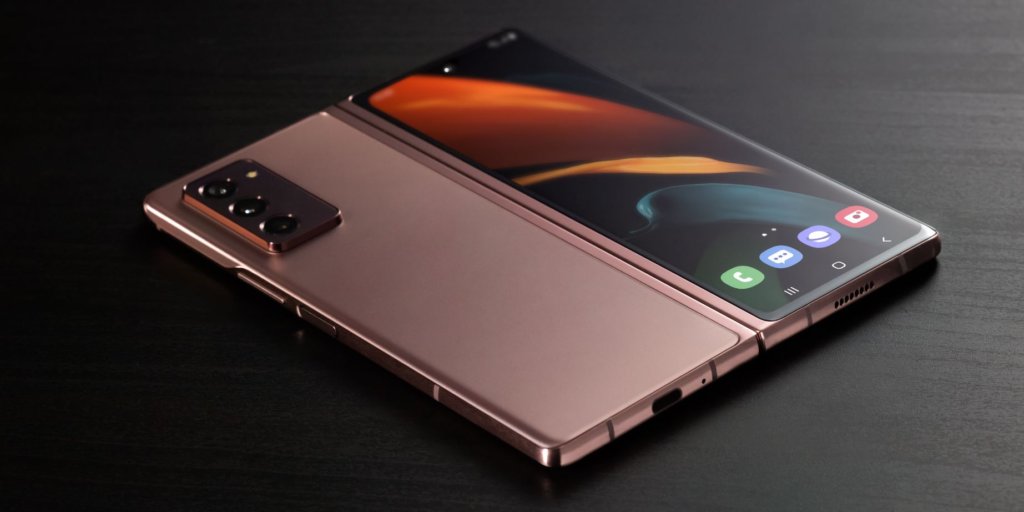 The Galaxy Z Fold2 also has a slightly larger dual battery setup over the original Fold, with two separate batteries working in tandem to offer 4,500mAh of juice and faster 25W wired charging along with reverse wireless charging for small devices like the Galaxy Buds Live and fast wireless charging.

The Galaxy Z Fold2’s most practical change is a larger Cover Display that now stretches to 6.2-inches versus the original Fold’s 4.6-inch display. This addresses the biggest original complaint of the Galaxy Fold – that you couldn’t do much with the admittedly miniscule Cover Display beyond checking your notifications and cramped web browsing.

The larger 6.2-inch panel on the Galaxy Z Fold2 allows you to do a whole lot more work much like a compact sized-midrange phone, leaving the larger main display for serious work. This saves quite a bit on battery life as the Cover Display can tackle more tasks and you’re only powering the main display when you need it like viewing a spreadsheet or a movie.

Samsung also added another interesting function for the new Cover Display – it can work as a viewfinder to frame your shots especially if you’re using the primary triple rear camera to take selfies. 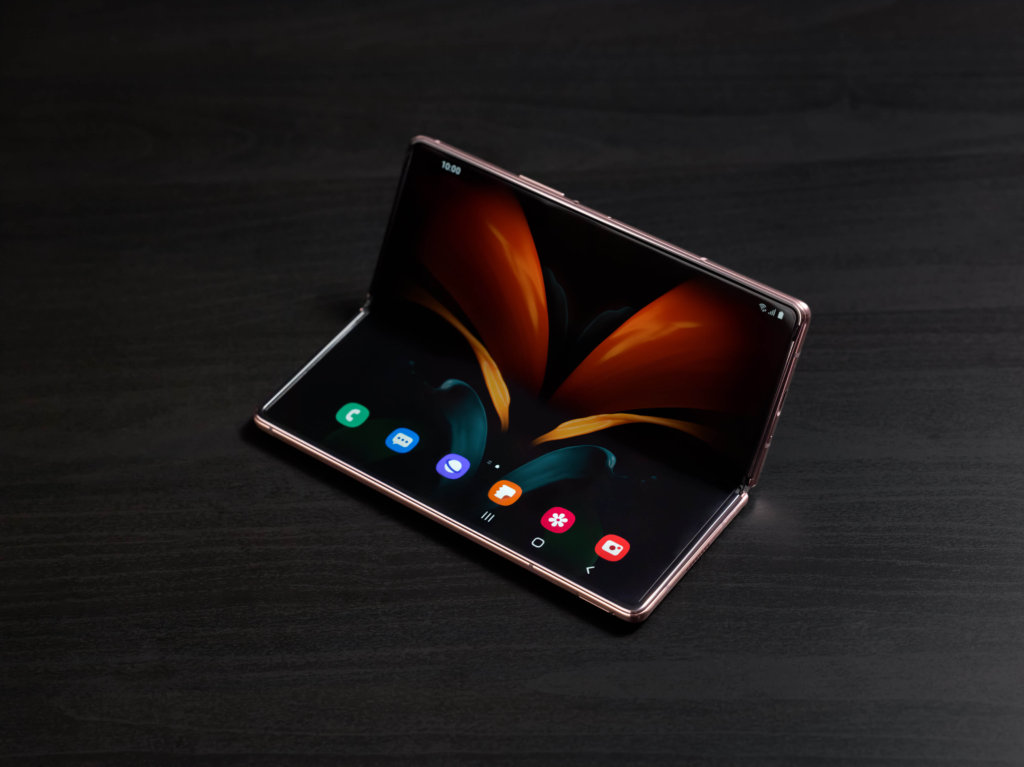 That’s not to take away what they’ve managed to achieve on the main display though as it’s an impressive feat of engineering that’s bigger, sharper and has a swifter 120Hz refresh rate.

The 6.7-inch QXGA+ display Super AMOLED Infinity Flex display is 0.3-inches larger than the original Fold. They’ve achieved this by shaving down the side bezels and fielding a much smaller camera cutout versus the huge swatch snipped out of the corner in the original Fold.

Of particular note is that the main 7.6-inch display on the Galaxy Z Fold2 has the aforementioned 120Hz dynamic refresh rate, allowing it to adjust the onscreen frame rate based on what content you’re watching from 11Hz for fairly static text and images to the full 120Hz when you’re watching movies and gaming. This also has the added benefit of helping you save on battery life too; a feature that the Galaxy Note20 Ultra 5G’s main display also prominently features.

Like the Galaxy Z Flip, the new Galaxy Z Fold2 has the ability to fold the screen halfway so that one half of the phone acts as a base. This is on account of a more robust Cam hinge rated for over 200,000 folds which also has a series of tiny brushes dubbed as ‘Sweeper’ technology to ensure dust and dirt stay out of the mechanism.

This semi-folding mode, dubbed Flex Mode takes a page from the Z Flip as you can use the phone in this mode to watch videos and capture shots and videos without the need for a tripod. 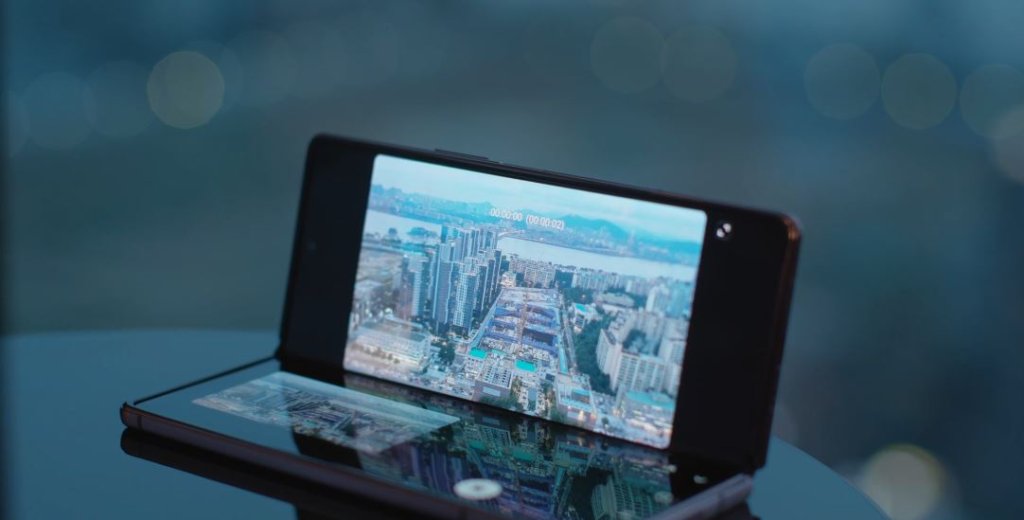 The Galaxy Z Fold2 also has much better multitasking capabilities with your choice of tweaking the One UI user interface so that it has a denser menu like that on a traditional phone or a wider, more spaced apart one like that seen on tablets at will.

They also demonstrated easy content drag and drop between screens as well as the ability to fire up two of the same app at once onscreen so that you can, for example, compared an email draft on one page and write it on the other. 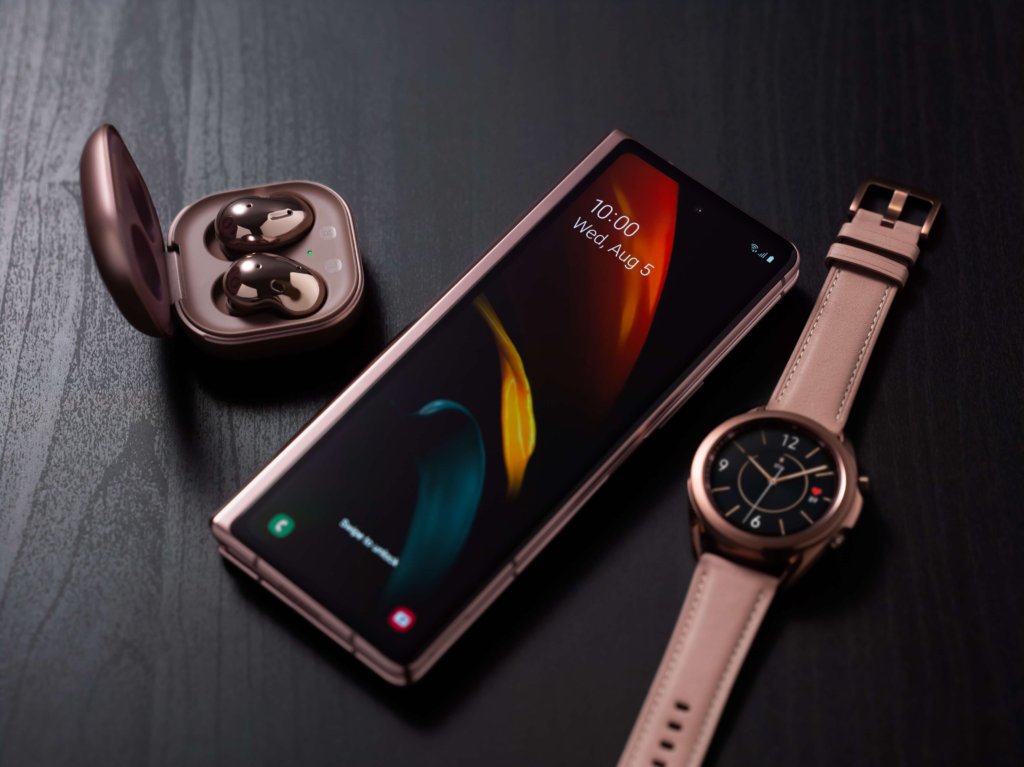 At the official Unpacked 2020 live stream, the Galaxy Z Fold2 was revealed with a choice of two colourways – Mystic Bronze or Mystic Black with the choice of four customisable colours for the rear Hideaway Hinge that you can select on preorder – Metallic Blue, Metallic Gold,  Metallic Red and Metallic Silver.

These special Hideaway Hinge custom colours are only available in 21 markets which include Australia, Austria, Belgium, Canada, Denmark, Finland, France, Germany, Italy, the Netherlands, Norway, New Zealand, Portugal, Russian, Spain, Sweden, Thailand, UAE, the United Kingdom, the United States and Vietnam. Alas, it seems Malaysia is not on the list so we’ll have to be content with matching Hideaway Hinge colours. That isn’t set in stone however so circumstances may change later on. 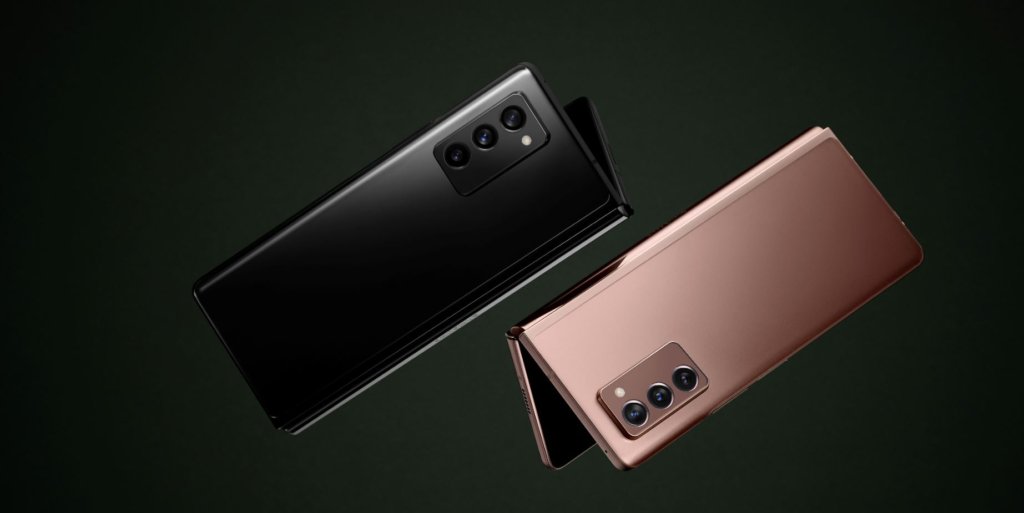 There is also a unique Thom Browne edition of the phone priced at US$3,299 paired with a matching Galaxy Watch3 and Buds Live in similar livery in a special case though this package is not likely to arrive in Malaysia. 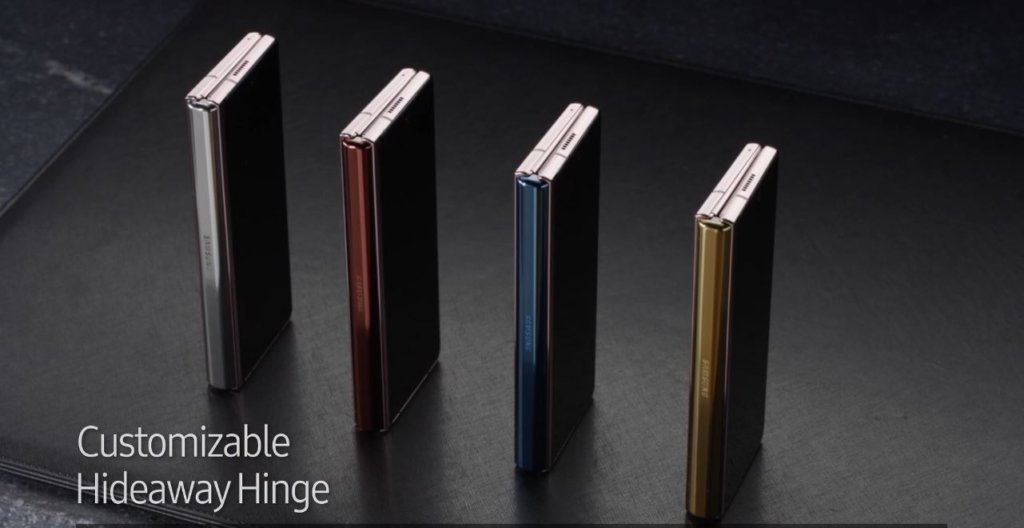 At the live streamed launch, Samsung announced that the Galaxy Z Fold2 will be priced at US$1,999 which translates to about RM8,280 with arrival on 18th September. 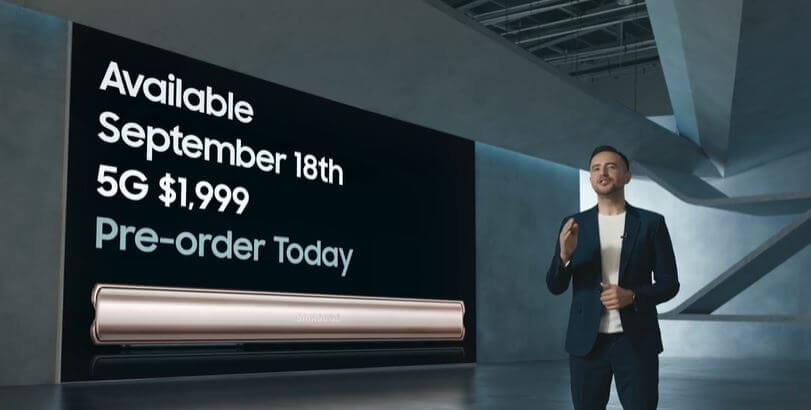 There’s no dates or confirmation as yet from Samsung Malaysia as to what preorder deals or prices are yet for Malaysia but their official page for the Galaxy Z Fold2 is already up which means its arrival is not too far away. We’ll keep you posted!

In the meantime, you can catch the video below for a quick recap of what the Galaxy Z Fold2 is all about.