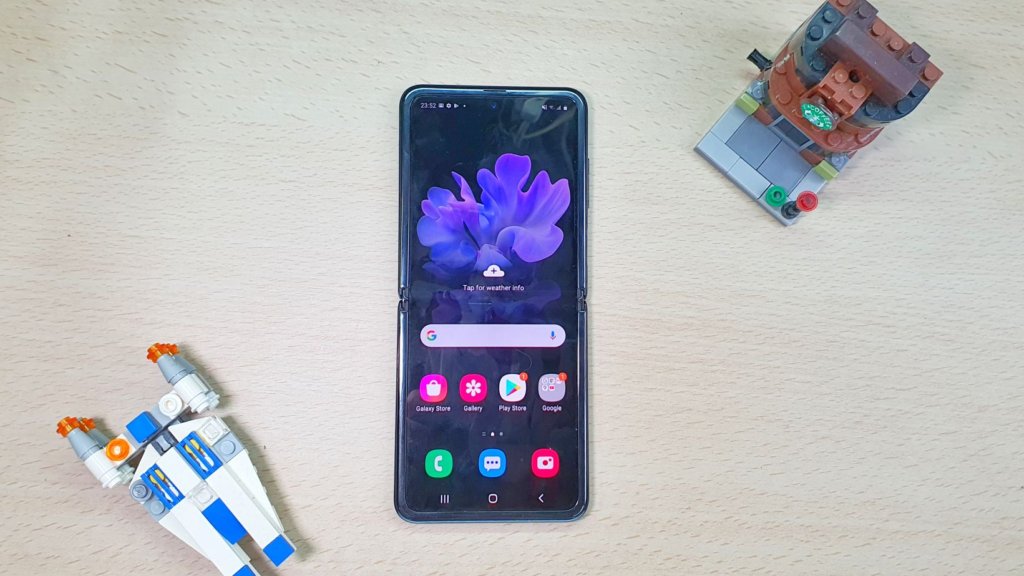 The Samsung Galaxy Z Flip is a more refined implementation of the technology seen in the first Galaxy Fold. Where the Galaxy Fold was intended as a work-oriented productivity device, the Galaxy Z Flip has a compact, clamshell form factor that harkens back to the flip phones from over a decade ago.

The phone itself has a design like nothing else in the current market with an impressive implementation of the classic clamshell design that has been modernised with cutting edge materials design while implementing the lessons learned from the deployment of the earlier Galaxy Fold.

The build quality for the Galaxy Z Flip is suitably impressive, with backplates that are sheathed in glass and metal with a beautiful tactility when held. Unfortunately, that posh looking shiny finish is also a fingerprint magnet so frequent wipedowns are needed to keep it looking pristine.

In order to address concerns with the durability of the hinges like that seen in the early-generation Galaxy Fold, Samsung has implemented a much more refined Hideaway Hinge mechanism that completely protects the internal hinges from external dust and dirt. A protective panel covers most of the hinge assembly while sidecaps protect the sides from ingress by dirt. When you unfurl the phone, the protective panel folds neatly into the hinge mechanism without getting in the way, hence its name.

This hinge mechanism is extremely sturdy and is designed to last. According to Samsung, the hinge mechanism itself is rated for at least 200,000 folds which is well beyond the lifetime you’d expect to use it. Flipping the Galaxy Z Flip open is a two-handed effort on account of the sturdiness of the mechanism; a precautionary measure to prevent it flipping open by accident in your pockets.

When deployed, the phone reveals a 6.7-inch foldable dynamic AMOLED display with a screen-to-body ratio of 82.5% that’s sheathed in Samsung’s Ultra Thin Glass substrate that’s just 30-microns thick that protects it to a modest degree from nicks and scratches.

Right at the top of the screen is a small centre-mounted punch hole for a 10MP single-sensor selfie camera for video calls and the like. There’s still a noticeable crease in the display when it’s deployed but it’s less apparent when you’re viewing brightly coloured content and doesn’t impact the overall user experience. 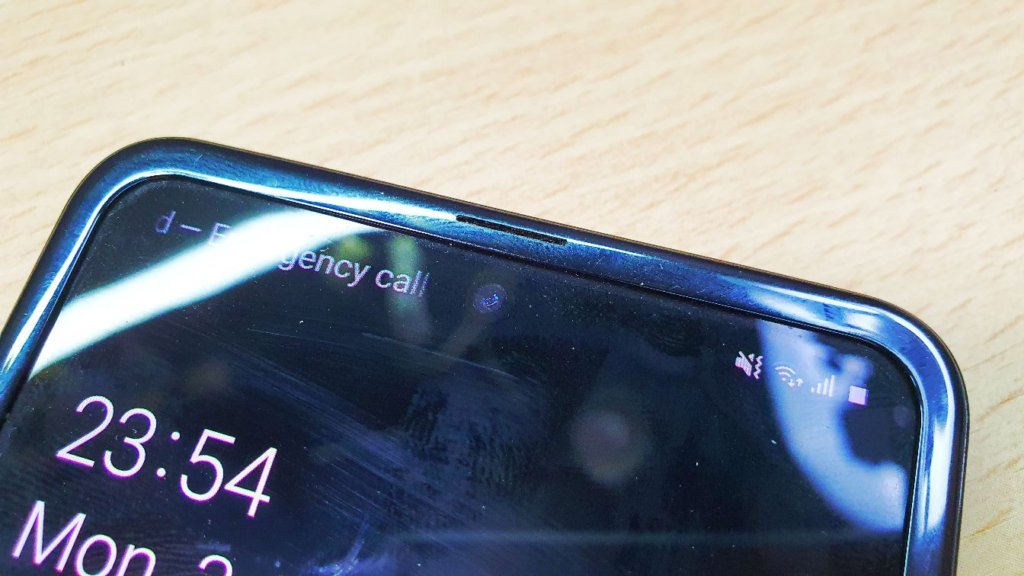 The innovation here is that this massive screen can fold back down into a form factor barely larger than a deck of cards and back again. This is a party trick that doesn’t get old and everyone who saw it from kids to seasoned seniors alike were enthralled with how it worked. Naturally, this kind of innovation doesn’t come cheap and at RM5,888, it manages to exceed the price tag of the latest Galaxy Note20 Ultra.

Display aside, the Galaxy Z Flip has a relatively solid array of specifications. While the hardware on offer isn’t the cutting edge of tech, it’s more than capable of giving a good accounting of itself.

The back of the phone when folded down hosts a dual camera setup which combines a 12MP ultra wide angle camera with a primary 12MP Dual Pixel camera with OIS. To allow you to get important details at a glance, the back has a small 1.1-inch Super AMOLED display which is about the size of a fingernail to let you see the time, remaining battery life and date and also act as a viewfinder for selfies in a pinch.In terms of buttonry, the phone has a volume rocker and a power button that doubles as a fingerprint reader on the right side. A single mono speaker along with a USB Type C port take their customary place on the base of the phone.

The lack of a microSD card tray means there is no way to expand the existing onboard storage but there’s 256GB baked in so it should last a while. Unfortunately, the phone lacks a 3.5mm audio jack which means you’ll have to rely on wireless headphones if you aim to do any private listening or the provided type-C wired headphones.

While its design takes centre stage, the Galaxy Z Flip still has a decent setup of hardware that includes last year’s very capable Qualcomm’s Snapdragon 855+ processor running the show. It may seem dated on paper but the SD855+ has plenty of bite left to it and can handle anything you can conceivably throw at it and then some. The phone also has a decent 8GB RAM and 256GB of storage though the lack of expandability is irksome.

Unfortunately, the phone lacks 5G support but a variant has been announced packing the new Snapdragon 865+ SoC and a 5G modem though there’s no news as yet on local availability. In terms of our test sample for Malaysia, it came with the following specifications:

The phone runs Samsung’s own One UI 2.1 user interface over Android 10 and is otherwise similar in terms of the features offered with their other flagship Galaxy S series phones save for a few unique additions on account of its foldable design. If you’ve used a Galaxy series phone in the last couple of years, you’ll be like a duck to water with the Galaxy Z Flip.

The most unique addition here is a Flex mode that takes advantage of the hinged mechanism to let you fold the Galaxy Z Flip halfway up at a 90-degree angle to let it stand on its own with selected apps reorienting themselves to fit the display, allowing you to take selfies or timed shots without the need for a tripod.

Barring that, there isn’t much third party support for this mode at present though it works perfectly fine with YouTube, allowing you to watch shows comfortably on your phone without having to prop the phone up or buying a separate stand.

Flex mode side, the phone acquitted itself well in benchmarks:

Once you’ve gotten past the novelty of a foldable display, the Galaxy Z Flip is a solid phone with flagship-grade hardware that can capably tackle most tasks albeit with some minor tradeoffs. The foldable display is bright, crisp and vibrant with good clarity under daylight though purists may take umbrage at the crease; it’s only apparent when you view content with extremely deep blacks or whites.

Under practical field conditions, the phone handled web browsing, gaming and other tasks in a capable fashion though only a limited number of apps really work with its Flex mode bar the camera mode and YouTube.

The small front AMOLED display up front on the top cover didn’t seem useful at first but it proved its worth as it minimised the need to open the display for other notifications.

In PCMark, the phone lasted a good 11 hours and 29 minutes of usage though actual field tests fell short of the mark. In terms of battery life under actual use conditions, the Galaxy Z Flip can last the better part of a work day. You’ll likely need a top-up by sundown but if you keep off extended gaming sessions and marathon sessions of Crash Landing On You on Netflix, you’ll have enough to last your way on the commute home.

The Galaxy Z Flip doesn’t break new ground with its dual camera setup that consists of a reliable primary 12MP F/1.8 camera that has OIS and Dual Pixel autofocus paired with a secondary ultra-wide angle camera as well as a 10MP F/2.4 selfie camera. 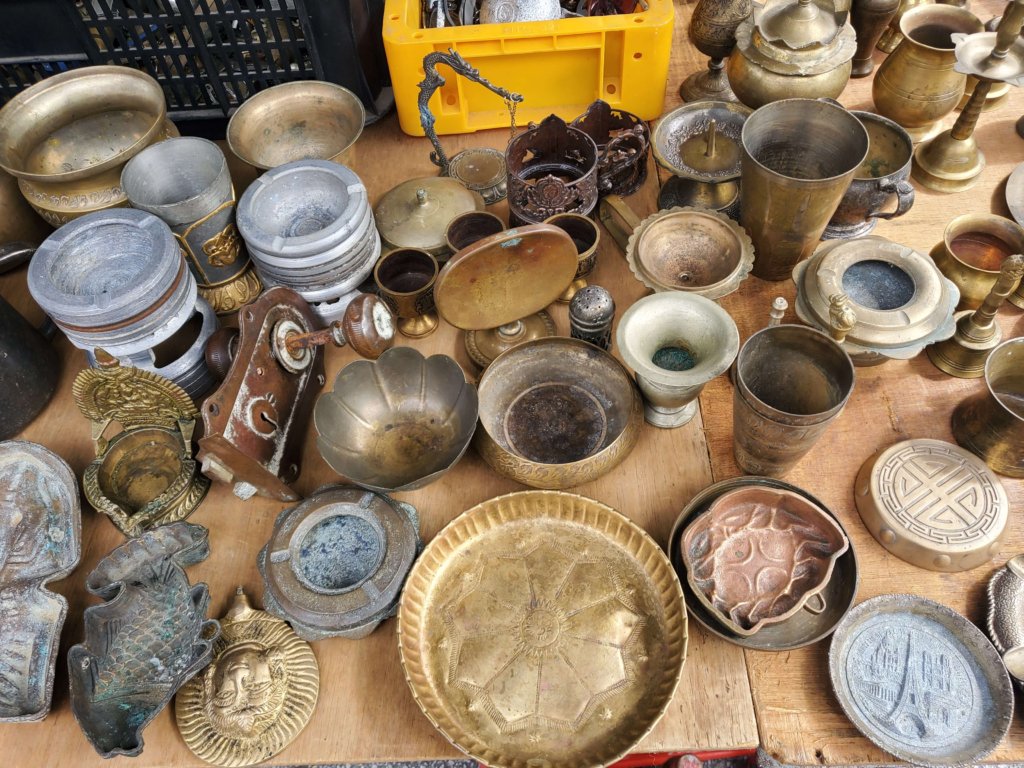 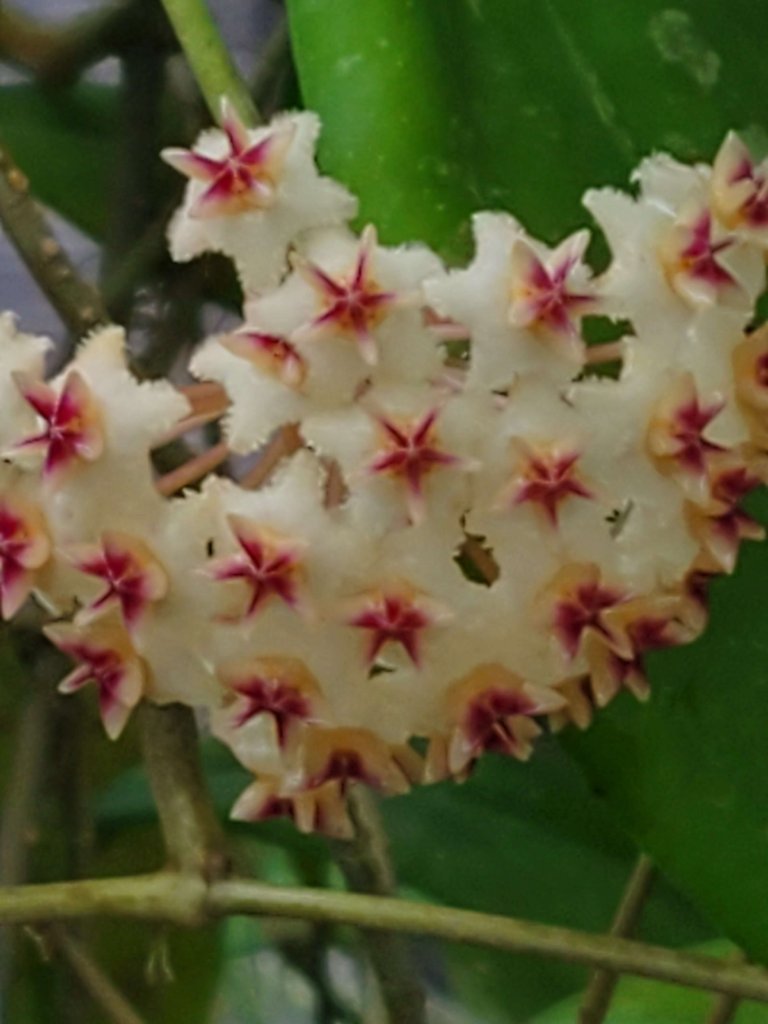 The camera hardware is akin to the cameras seen on the Galaxy S10 which is an excellent snapper with a solid track record. Both the rear and selfie cameras are capable of capturing up to 4K video on both the rear and selfie cameras. There’s one tradeoff though as the Galaxy Z Flip’s cameras though as the primary 12MP dual rear camera lacks a mechanical dual aperture like that seen on the S10 but the fixed F/1.8 aperture with the Galaxy Z Flip’s main camera is more than sufficient for the task. 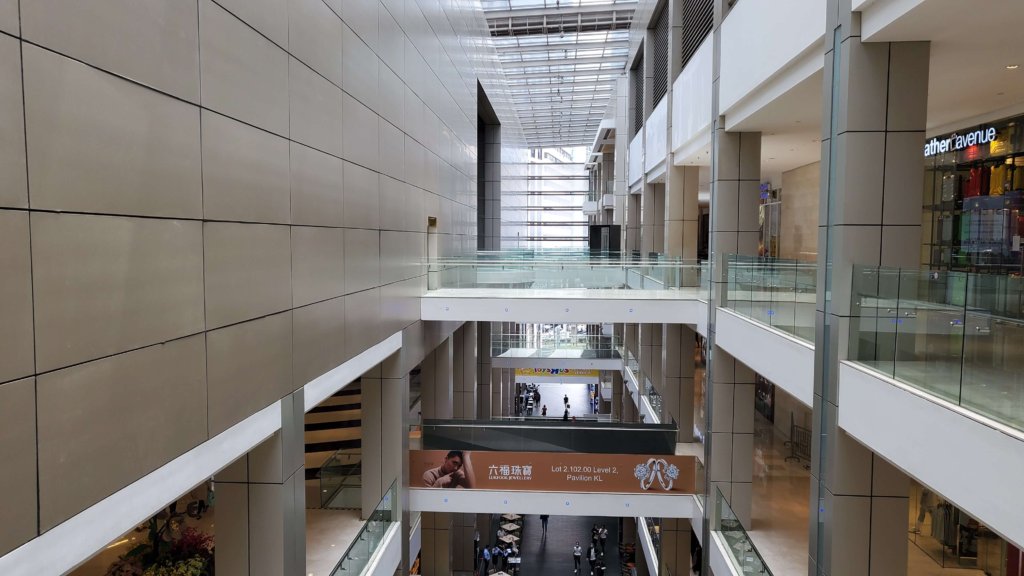 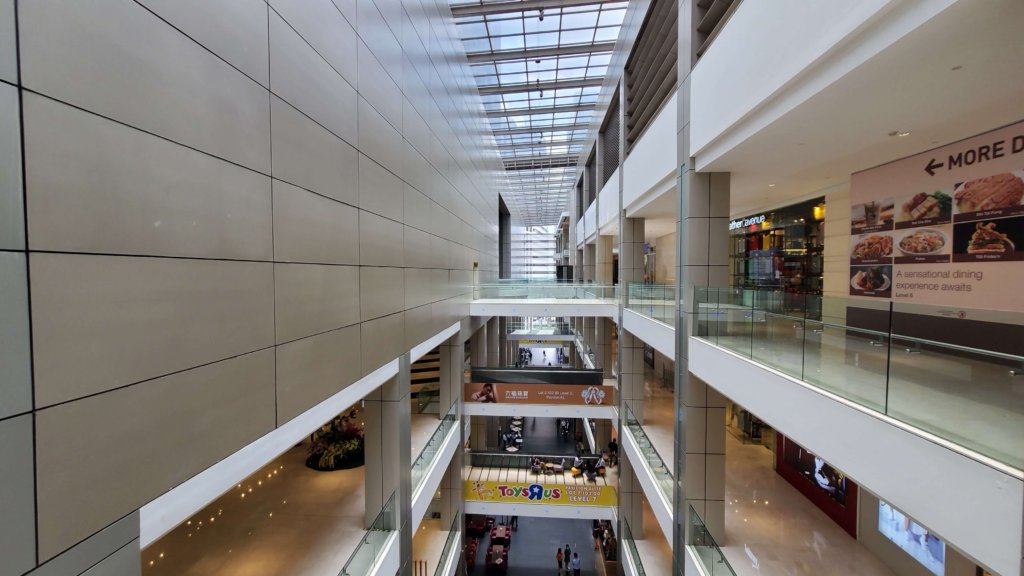 Images captured on the primary rear camera are pleasantly viewable with good dynamic range, plenty of detail and lush hues onscreen with pretty decent, if not stellar low light performance. The ultrawide angle camera is on the ball here as well with good colour balance and a fair amount of detail but it fares poorer under low light than the primary camera with somewhat soft results. For the most part, most casual users will be more than happy with what the Galaxy Z Flip has to offer. 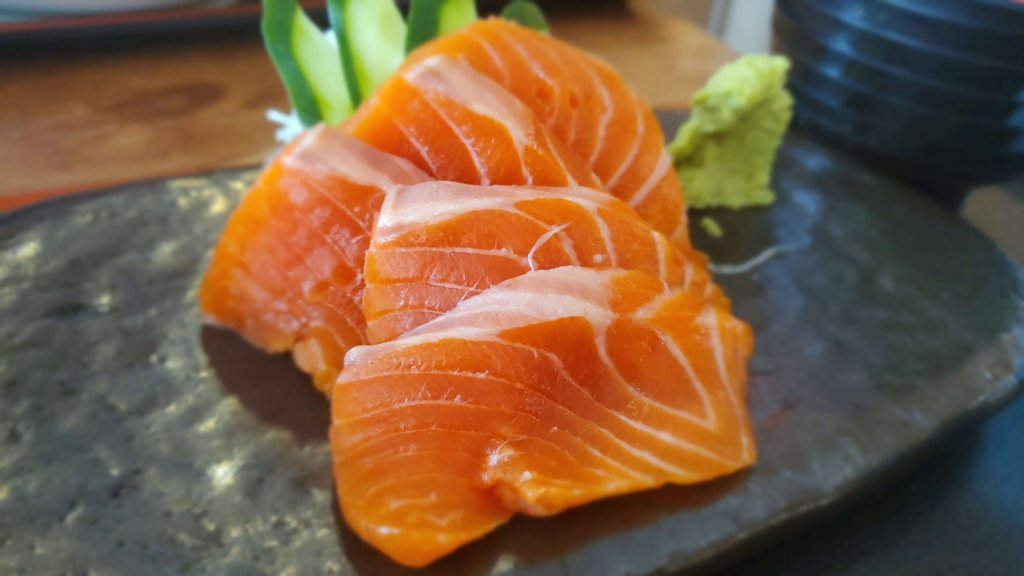 Where it has an edge is on account of its form factor with its ability to stand up on its own in Flex mode allowing for more creative opportunities for self portrait shots or hyperlapse snaps on the rear camera. On that note, the front selfie camera serves up pretty accurate skin tones and also intelligently helps to clean up your complexion somewhat. 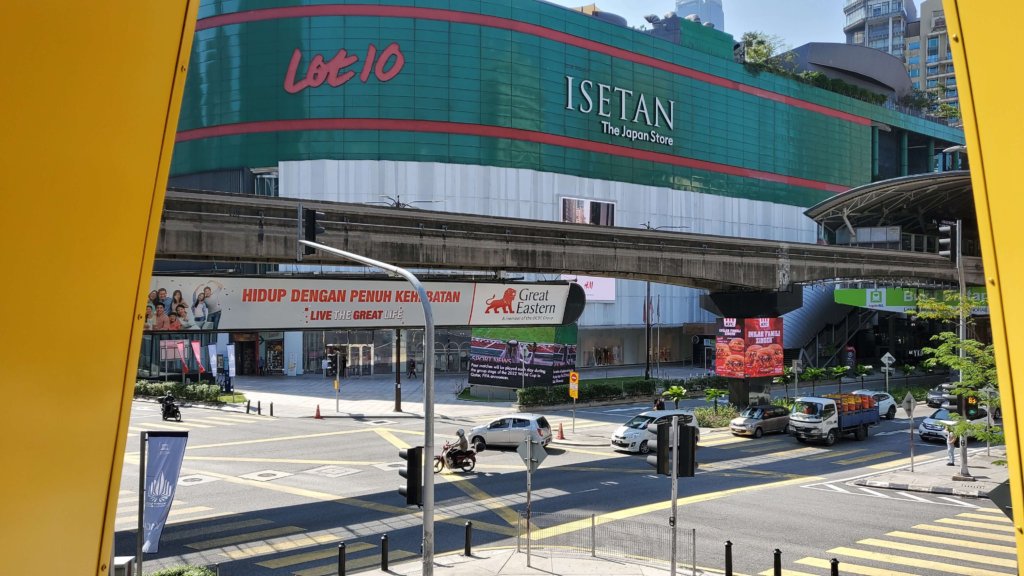 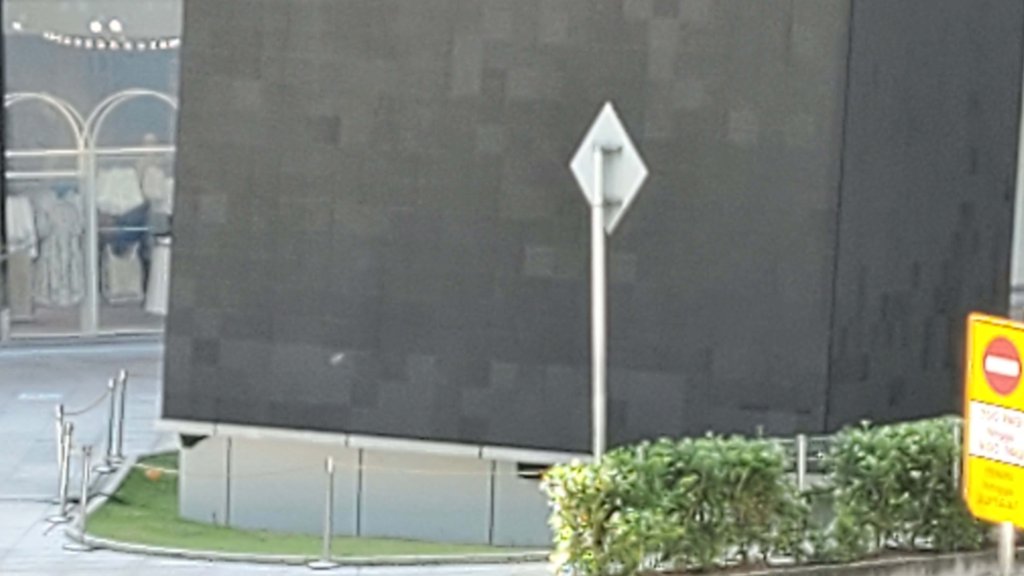 You can use the dual rear camera setup for selfies via the small 1.1-inch AMOLED display on the top cover as it is capable of acting as a viewfinder of sorts. It’s not the most accurate way to frame a shot as the aspect ratios are different from what the cameras can offer but for a quick Instagram post, it’s more than sufficient. 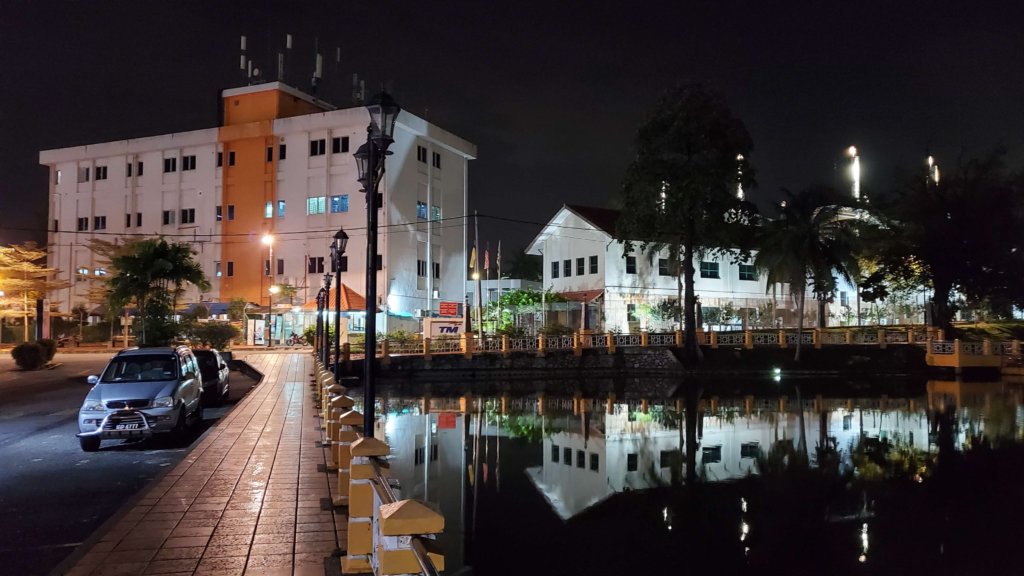 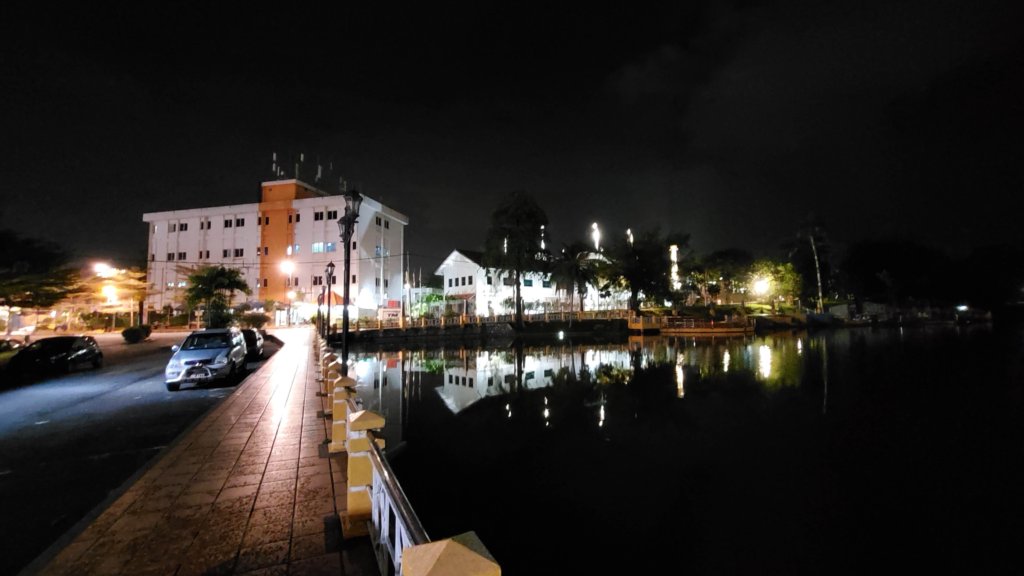 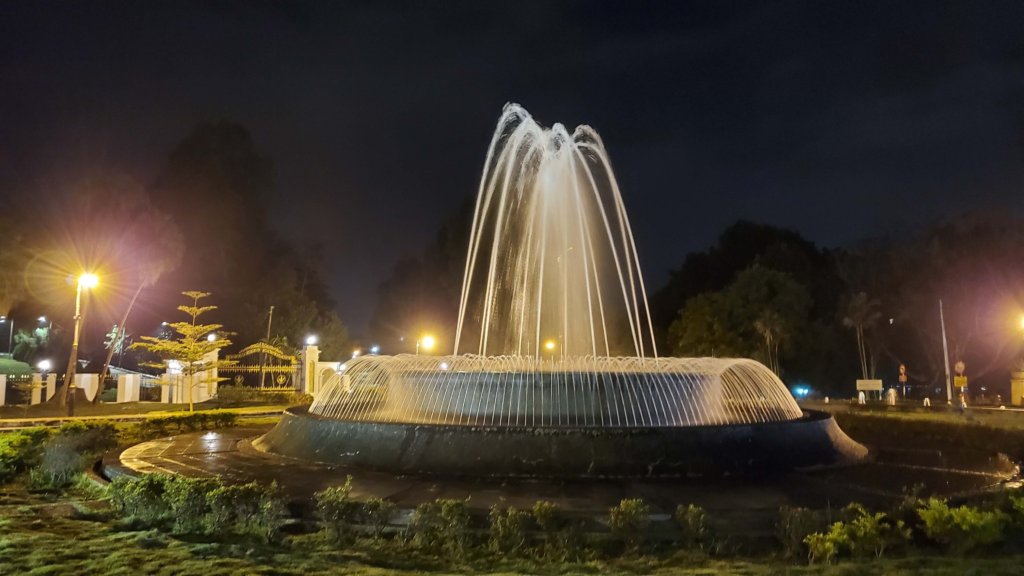 The Samsung Galaxy Z Flip is ultimately a fashion statement wrought in glass and metal that will make heads turn wherever you go It’s a pretty good phone as well with a large and vibrant display, a decent if slightly dated Snapdragon 855+ processor and a competent pair of dual rear cameras. Unfortunately, this particular variant lacks 5G connectivity, ditches the 3.5mm audio jack and expandable storage too. If you have a burning need to have the most unique phone that money can currently buy in the market, the Galaxy Z Flip is right up your alley. 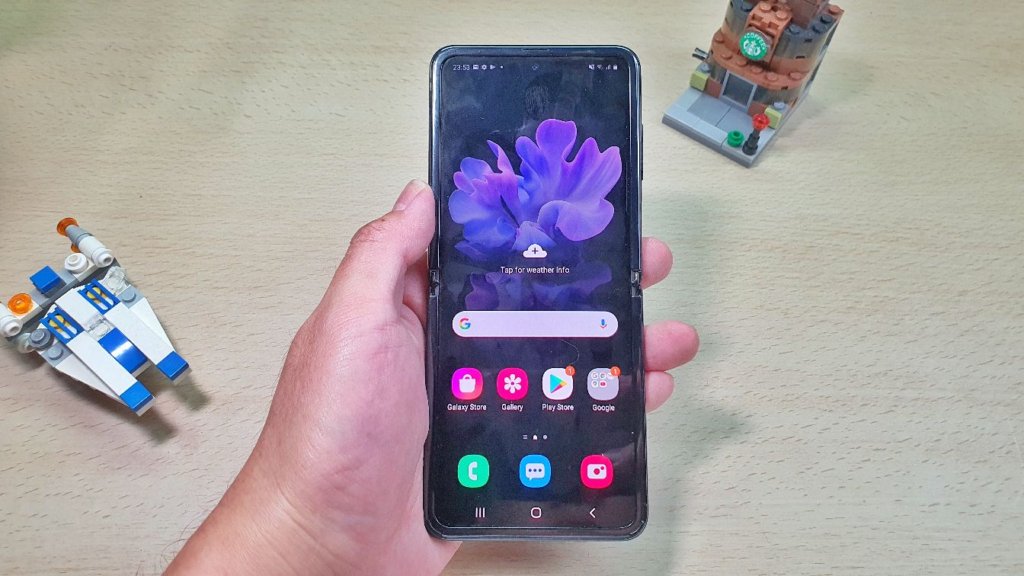 What we liked Innovative flip folding mechanism, unique design
What we didn’t Not cheap, still a noticeable crease when opened, no microSD card slot, no 3.5mm audio jack
We say If you aim to make a decisive fashion statement while seeking one of the most compact phones that money can buy, the Galaxy Z Flip is your best bet with its ultra-compact clamshell design that unfurls into a massive 6.7-inch phone with respectable hardware and cameras. It’s not cheap but if you aim to have something that turns heads every time you brandish it, this is it.

If you aim to make a decisive fashion statement while seeking one of the most compact phones that money can buy, the Galaxy Z Flip is your best bet with its ultra-compact clamshell design that unfurls into a massive 6.7-inch phone with respectable hardware and cameras. It’s not cheap but if you aim to have something that turns heads every time you brandish it, this is it.