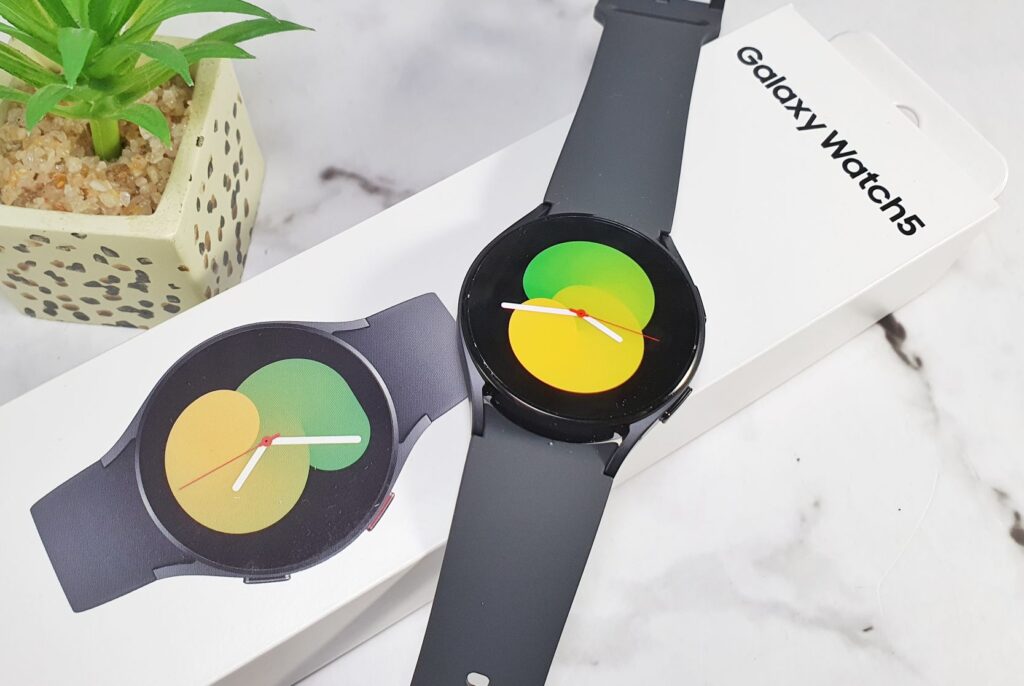 While it bears an outwards similar appearance to its predecessor the Galaxy Watch 4 from last year, the Galaxy Watch5 hosts a number of critical upgrades in several ways with enhanced durability, a new skin temperature sensor and a host of improvements to the firmware to make it easier to use. We managed to get a sample in for review and pending a full-on field test, here’s our Samsung Galaxy Watch5 first look where we size up their latest smartwatch. 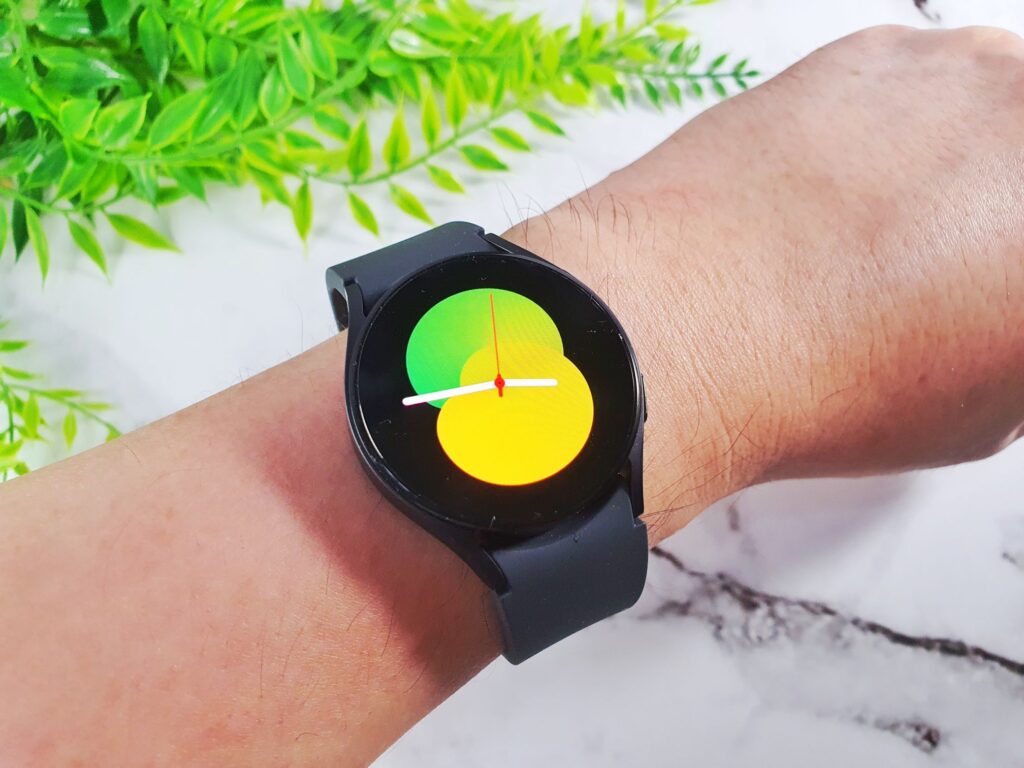 More astute readers will note that a larger Galaxy Watch5 Pro is available that uses more premium titanium in its construction, has a larger battery and display along with more sophisticated route tracking but comes at a higher RM1,899 price tag.

In keeping with their recent efforts at sustainability, there isn’t much bundled with the Galaxy Watch5 save for the watch itself and in the case of our sample unit, matching matte black silicone straps, a quick start manual, a warranty guide as well as a wired charger with one end that terminates in a USB-C port and the other in a magnetic pedestal that latches onto the rear of the watch. 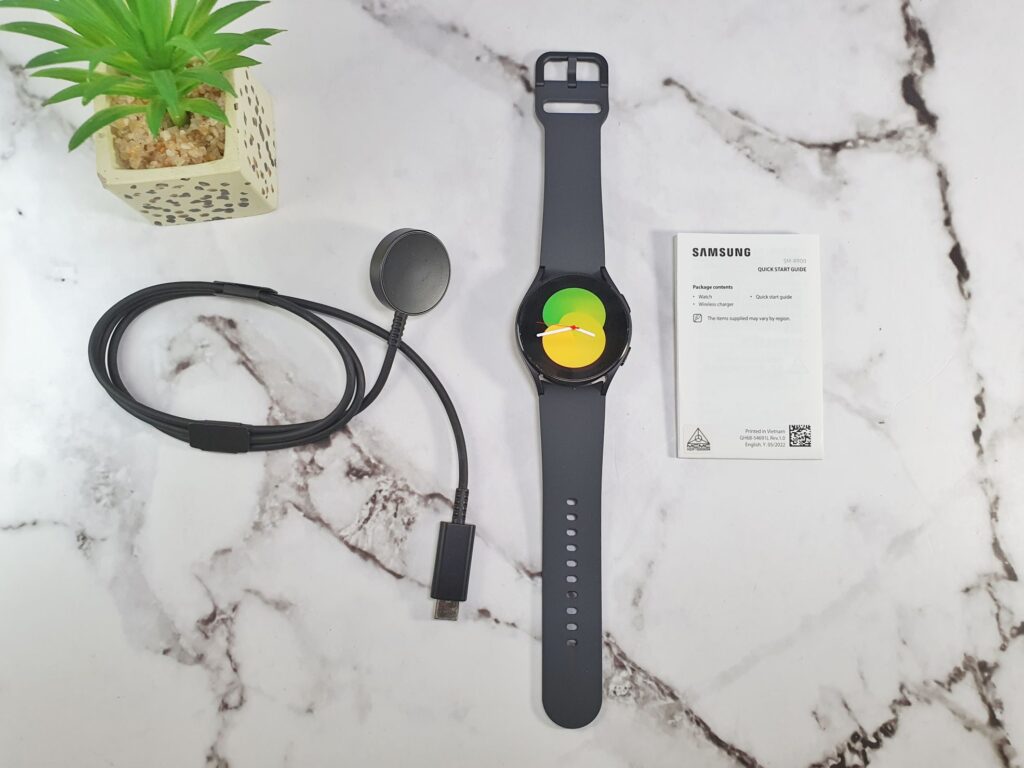 Our Galaxy Watch5 first look sample is the smaller 40mm version with a 1.2-inch rounded AMOLED display that has 330 pixels per inch and excellent visibility under sunlight. It also has a 284mAh battery. The larger 44mm variant has a 1.4-inch AMOLED display and a slightly larger 410mAh battery.

While it superficially resembles its predecessor the Galaxy Watch4, the Galaxy Watch5 is made of much tougher material with Armor Aluminum for the watch case and lugs along with Sapphire Crystal on the watch face itself.

Armor Aluminum is the same material used in the chassis of Samsung’s Galaxy Z Fold4 and Flip4 and has 10% tougher resistance versus the standard aerospace grade aluminium used in conventional smartphone designs. Sapphire Crystal is a mainstay in more premium mechanical timepieces and is 60% more resistant to scratching versus the Gorilla Glass DX+ used in the older Galaxy Watch4.

Of note here is that the Galaxy Watch5 series has an IP68 dust and water resistance rating which means that it can shrug off immersion in up to 1.5 metres of freshwater for up to 30 minutes at a time.

The side of the case hosts two side-mounted buttons with one acting as a Home Key and the other as a Back key that are used in tandem with the rounded touchscreen to navigate the OneUI Watch 4.5 interface overlaying Android Wear OS 3.5. 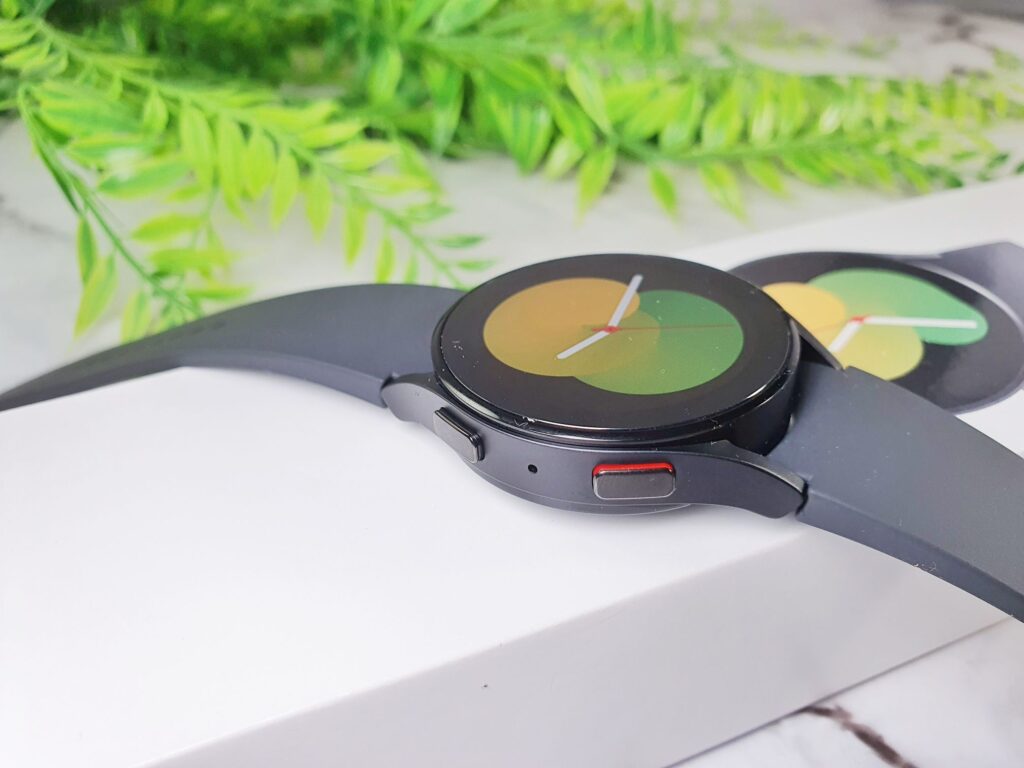 Google’s Wear OS grants full access to the Google wearable Play store and seeing as this is Samsung-issued gear, you get access to Samsung Pay, Bixby and other aspects of their ecosystem which gives it a decisive edge in usability out of the starting gate. While their much loved physical rotating bezel is not present, you can still trace the edges of the display and access a digital rotating bezel to navigate the menus.

Under the hood, the phone runs an Exynos W920 dual-core processor paired with 1.5GB RAM and 16GB of onboard storage primarily for offline music storage, images, apps and the like. While LTE models of the Galaxy Watch5 exist, the models currently sold in Malaysia are Bluetooth only.

On the underside of the Galaxy Watch5 is Samsung’s unique 3-in-1 BioActive sensor that helps to monitor heart rate, blood oxygen and body composition analysis on top of the usuals like activity, sleep and fitness tracking. The underside has also been curved slightly to ensure better skin contact for more accurate readings. A new addition here is a skin temperature reader though this hasn’t been activated just yet in Malaysia pending authorisation. 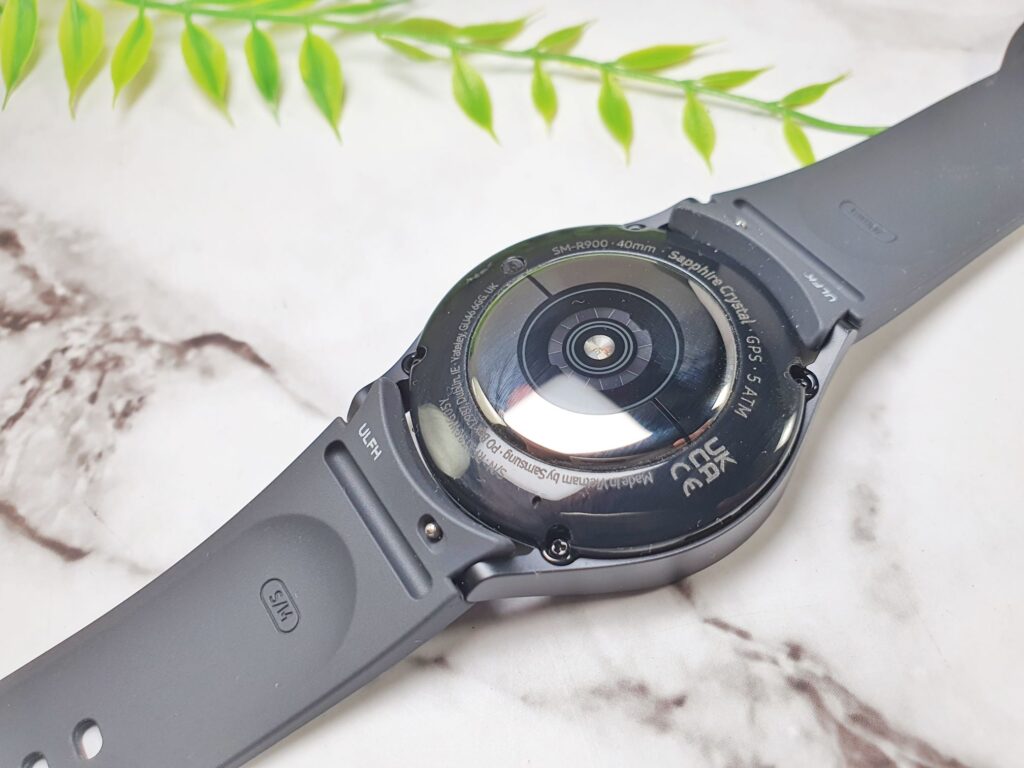 Samsung Galaxy Watch5 First Look – The underside of the watch hosts a new skin temperature sensor along with Samsung’s own 3-in-1 BioActive sensor.

Out of the box, our Samsung Galaxy Watch5 first look sample came in a matte black shade dubbed as Graphite with dark grey silicone straps to complement it. The 40mm version can also be acquired in a shade of Pink Gold or Silver.

The clasp and strap are all integrated as a single piece and made of a soft silicone material that is comfortable to wear for extended periods of time. Both our Galaxy Watch5 40mm first look sample and the larger 44mm variant both support third party 20mm straps and removing the existing straps does not require tools as all you need to do is to press a small stud to slide the straps out. 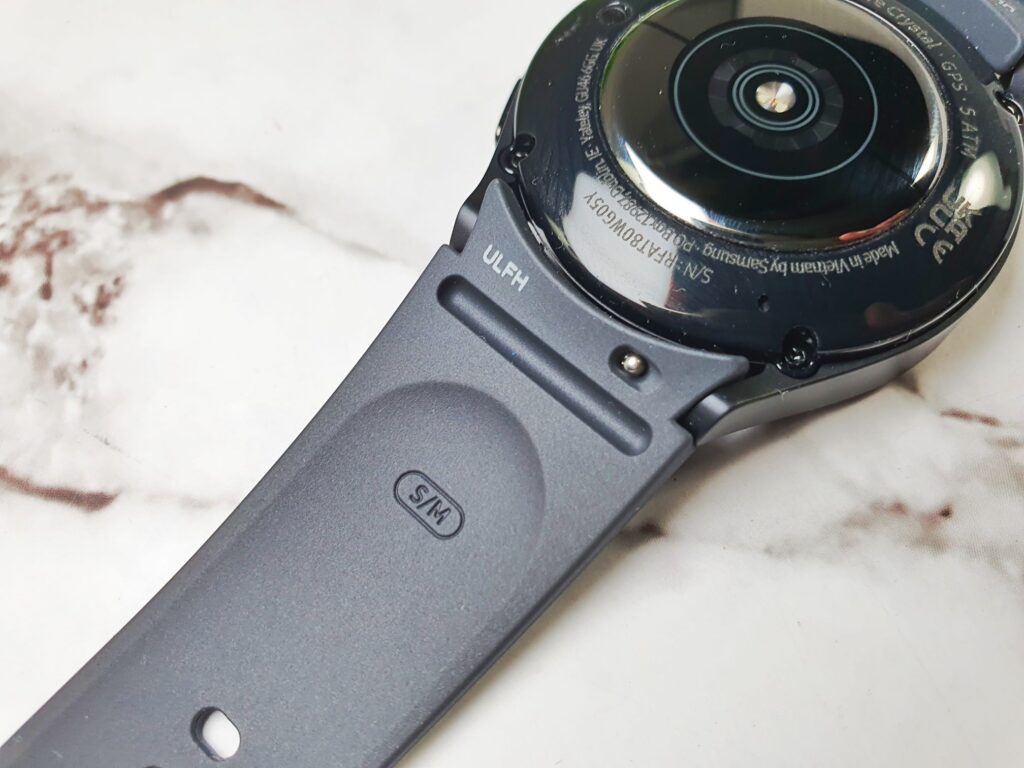 At first blush, the Galaxy Watch5 40mm feels comfortable to the touch when donned and is gratifyingly light though it does look somewhat small when worn by gentlemen. It’ll take some time to fully put the Galaxy Watch5 through its paces so stay tuned for our upcoming full review! 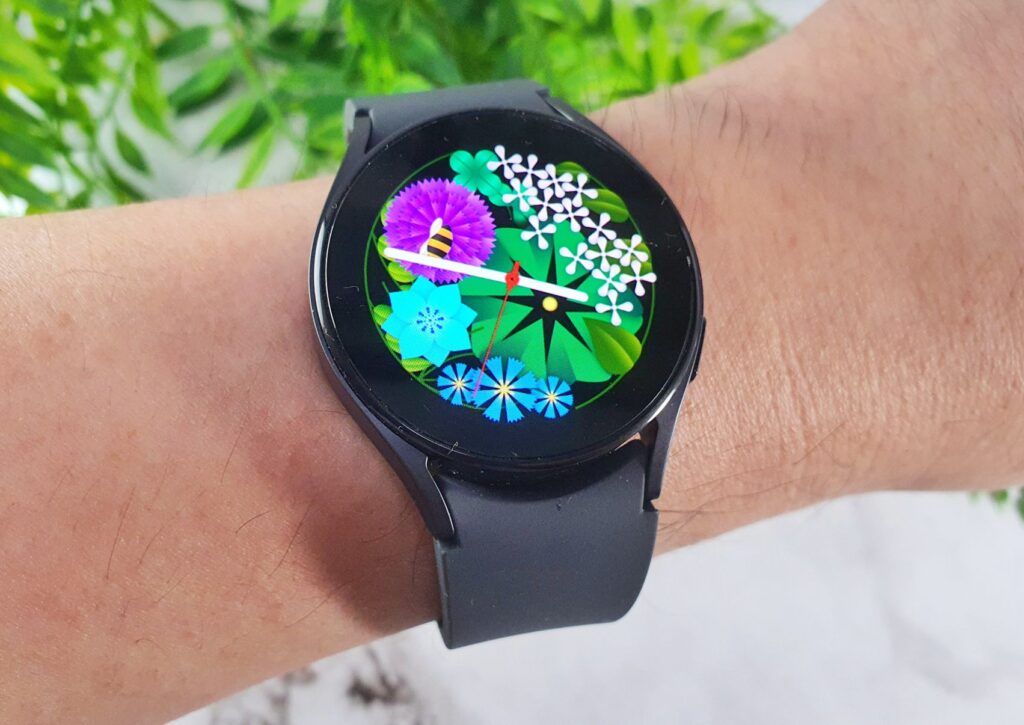