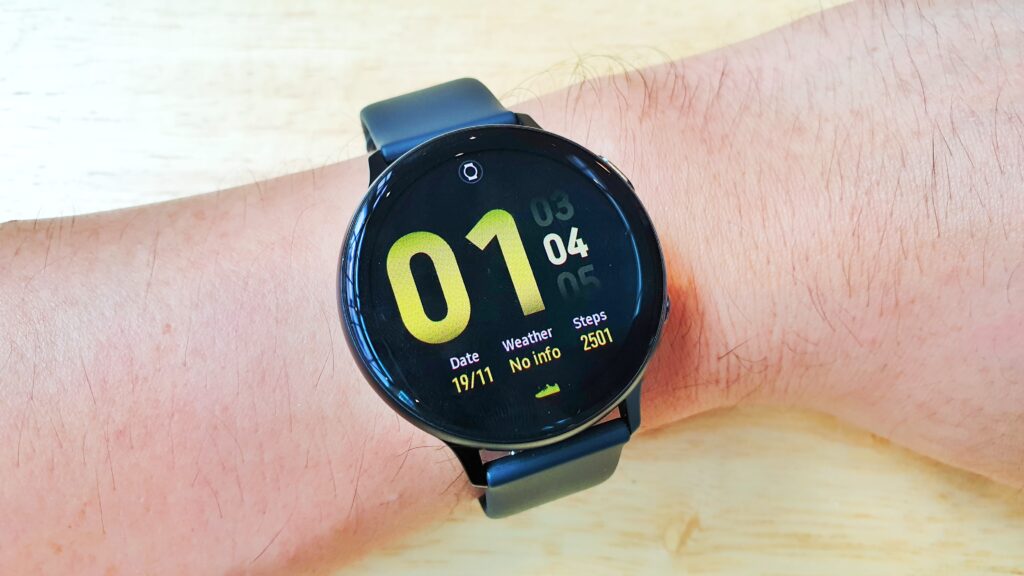 In terms of specifications, the Galaxy Watch Active2 is a modest incremental upgrade over its predecessor and comes in a variety of different colours with corresponding matching straps in a veritable smorgasbord of materials ranging from fluoroelastomer to metal. In case you’re a fitness buff, there’s also an Under Armour edition variant. 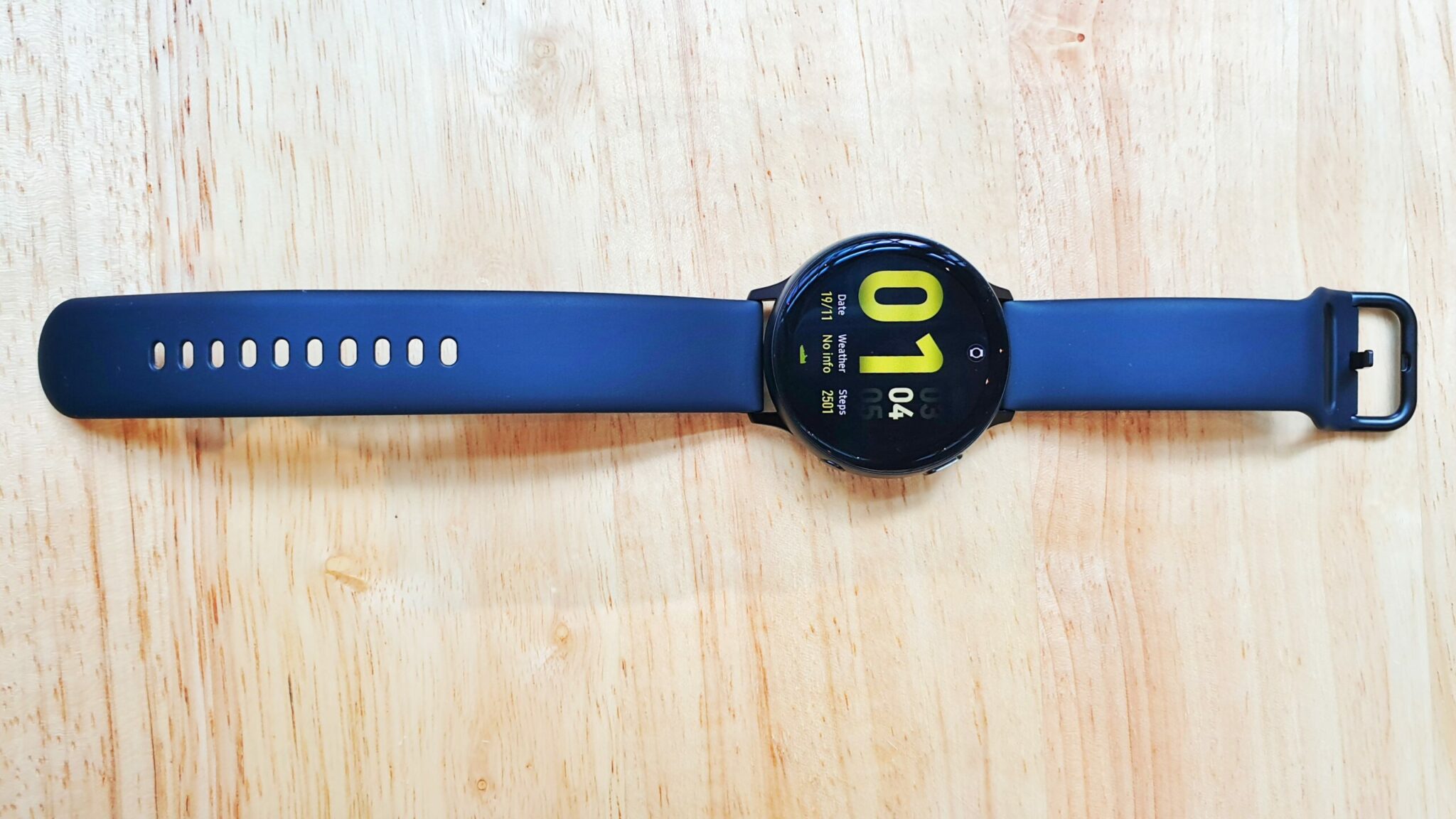 At first blush, the Galaxy Watch Active2 looks like a slimmer and sleeker version of the original Watch Active. Our test unit came in matte black with matching fluoroelastomer straps that can be swapped out at will for third party ones. 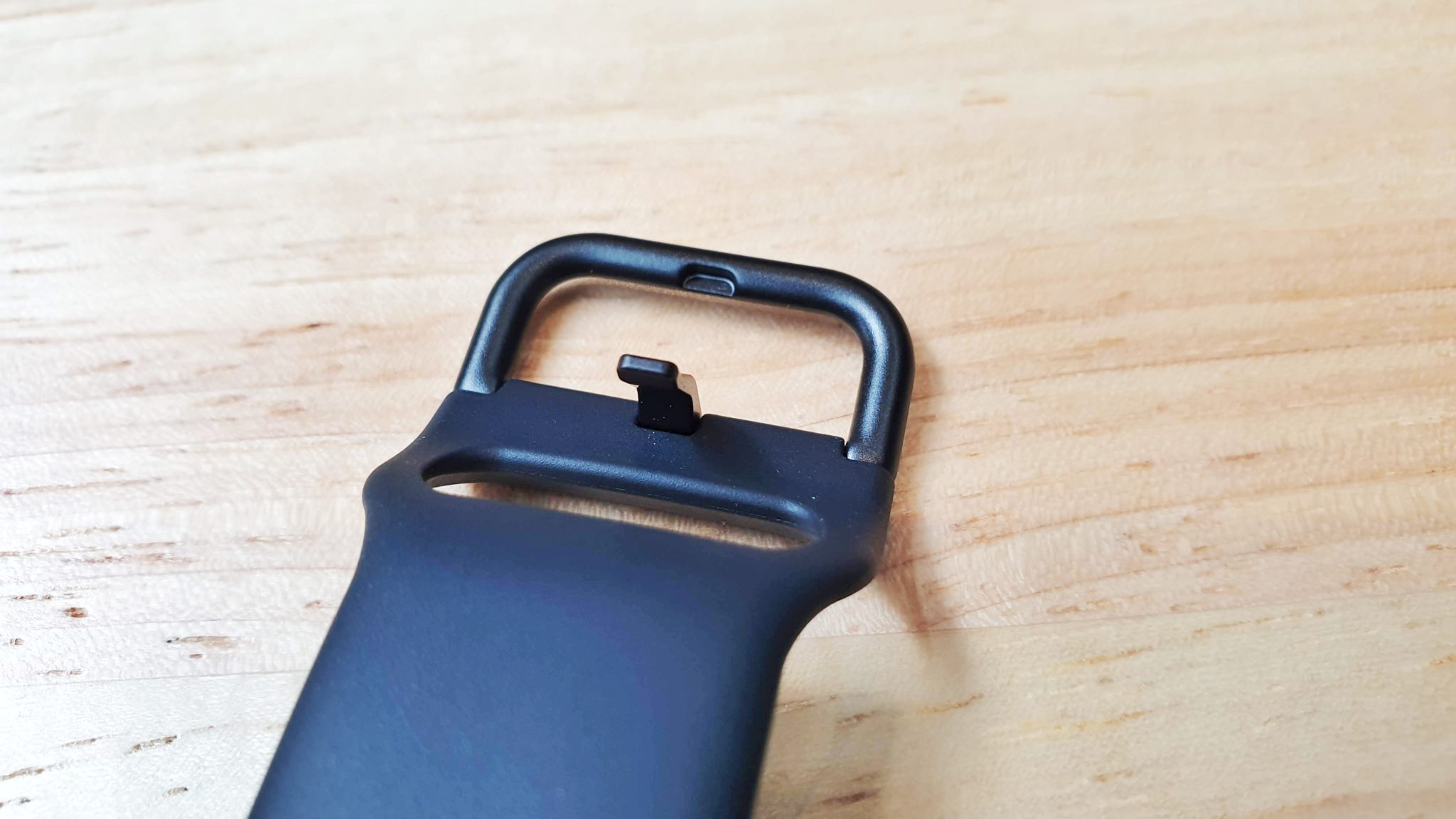 The watch itself is also rated IP68 for water resistance and dust ingress as well as usage in up to 50 meters of water though you shouldn’t be taking it scuba diving in any case. Donning it is a lot easier than the Galaxy Fit on account of having a working clasp which makes fastening it to your wrist a lot easier one-handed.

The finish comes in a matte black that nicely repels fingerprints and the watch case has a similar button layout with a 1 ‘o clock back button and a 3 ‘o clock home button on the lower right. Getting about is primarily via the touchscreen. The underside has a heart rate tracker for fitness tracking duties with eight photodiodes which is double what its predecessor packed for more accuracy. 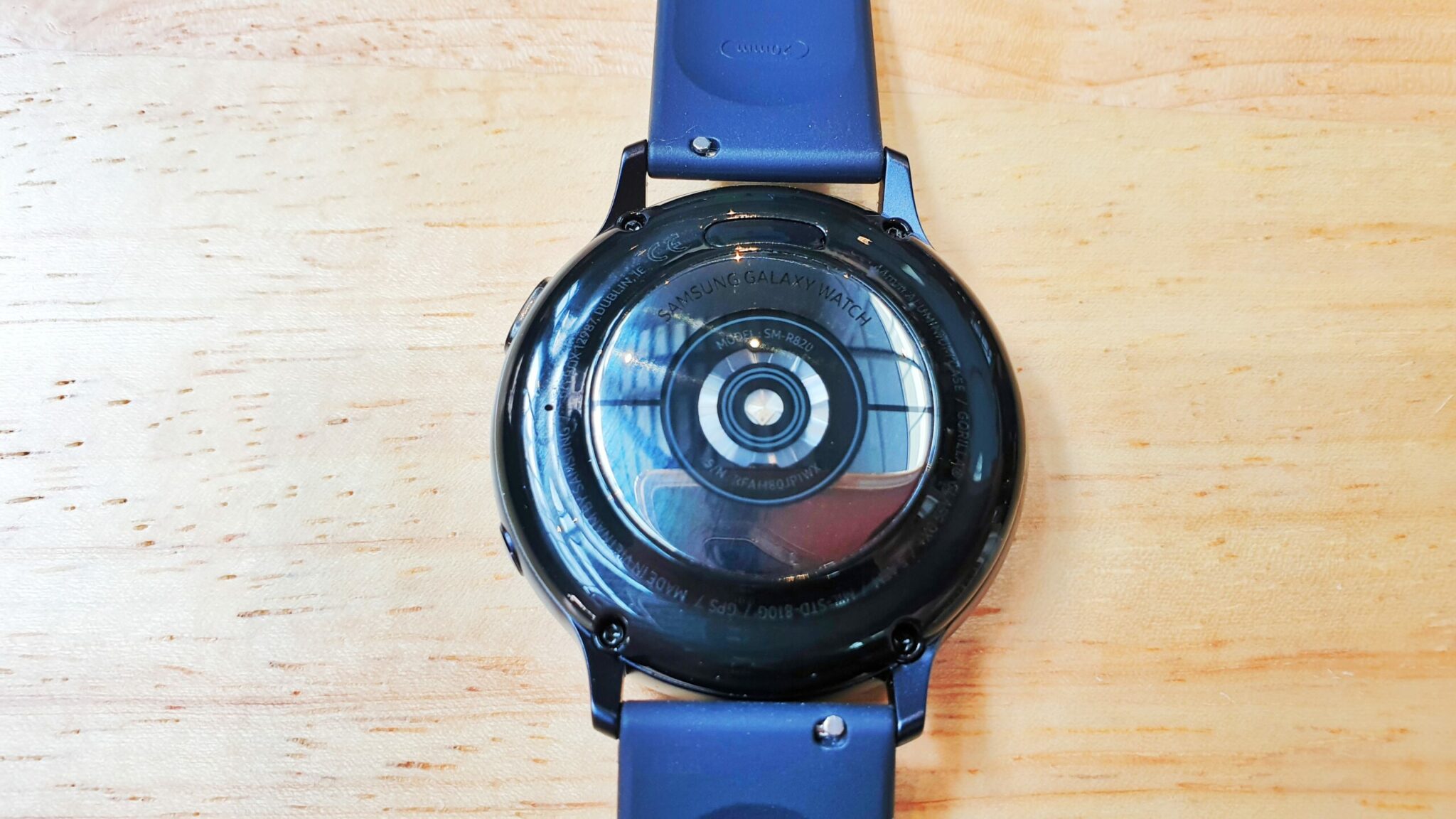 The overall design is gender neutral and it’s easily worn by either gender. Its build quality is up there with the best of them.

Bar the differences in the size of the display, the hardware on offer in the Galaxy Watch Active2 is similar to the original Galaxy Watch Active with an Exynos 9110 1.15GHz dual-core processor, 750MB of RAM and 4GB of non-expandable storage with about 1.4GB of effective usable space minus the footprint taken up by the firmware. 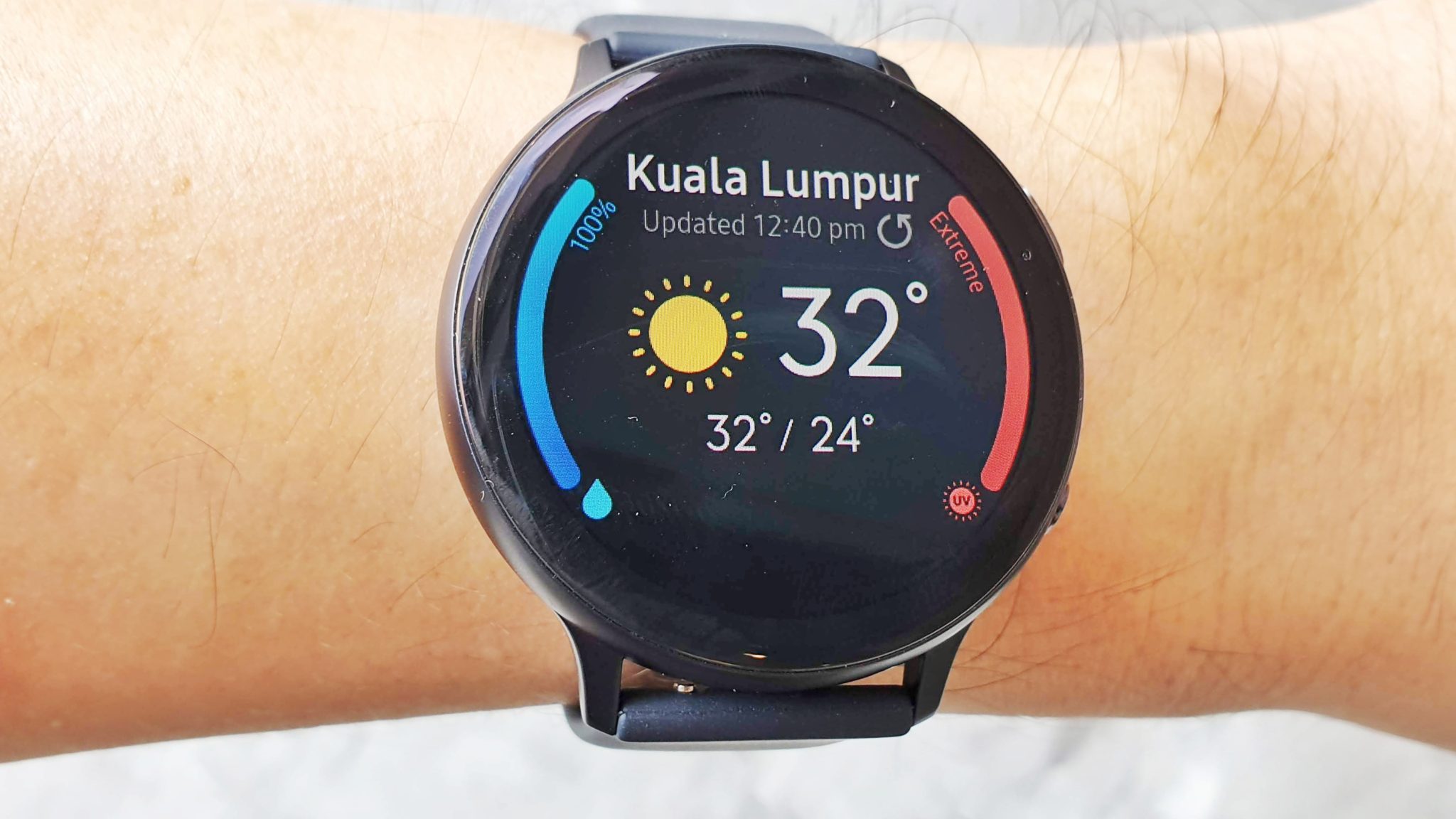 You can feasibly load a good playlist or two of music on your watch enough to last a jog or two and most apps average less than a Megabyte so there’s plenty of storage space on hand. Models in Malaysia only have WiFi connectivity though LTE/4G enabled models exist in other countries. The Galaxy Watch Active2 also has built-in speakers for music as well as a slightly larger 340mAh battery versus its predecessors 230mAh which was also otherwise mute. 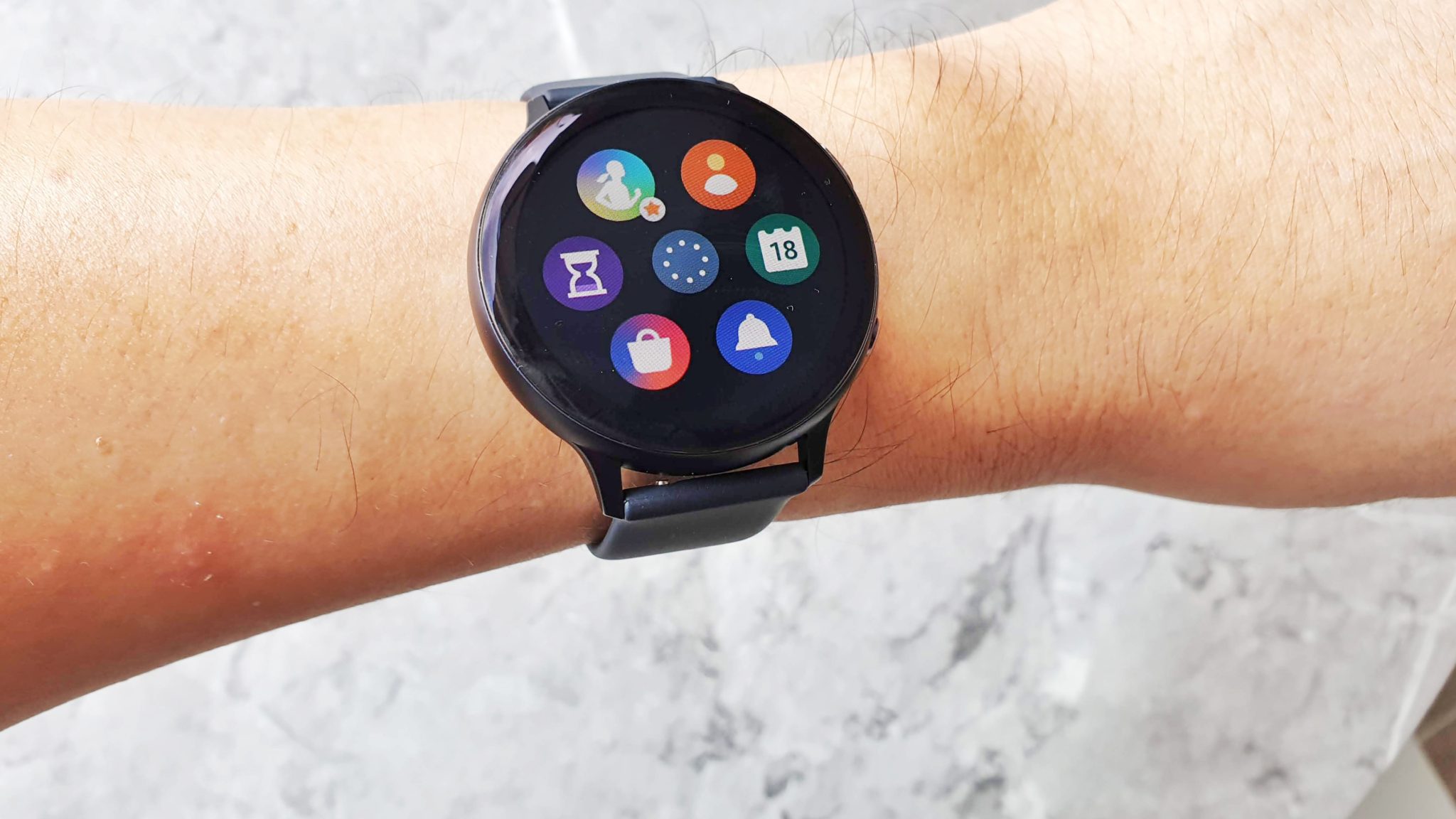 Under the hood, the Galaxy Watch Active2 runs Samsung’s own Tizen OS. Since its debut, it’s arguably one of the best implementations of an operating system for a smartwatch with an intuitive means of navigating the menus via a rotating bezel. While early versions like the Gear S3 and Galaxy Watch had a physical rotating bezel, it was something the Watch Active lacked. Fortunately, the Watch Active2 has the rotating bezel implemented in a digital fashion by touching the edge of the rounded bezel but it’s not turned on by default which is mind boggling indeed as it’s quite literally the killer feature of the phone.

Most people will likely get about by touching and swiping the display but the addition of the digital rotating bezel in the Galaxy Watch Active2 is a real game changer. All you have to do is to tap the edge of the rounded display and then move your finger clockwise or counterclockwise to navigate the menus. There’s also satisfying haptic feedback to give you an indication that you’re heading somewhere. 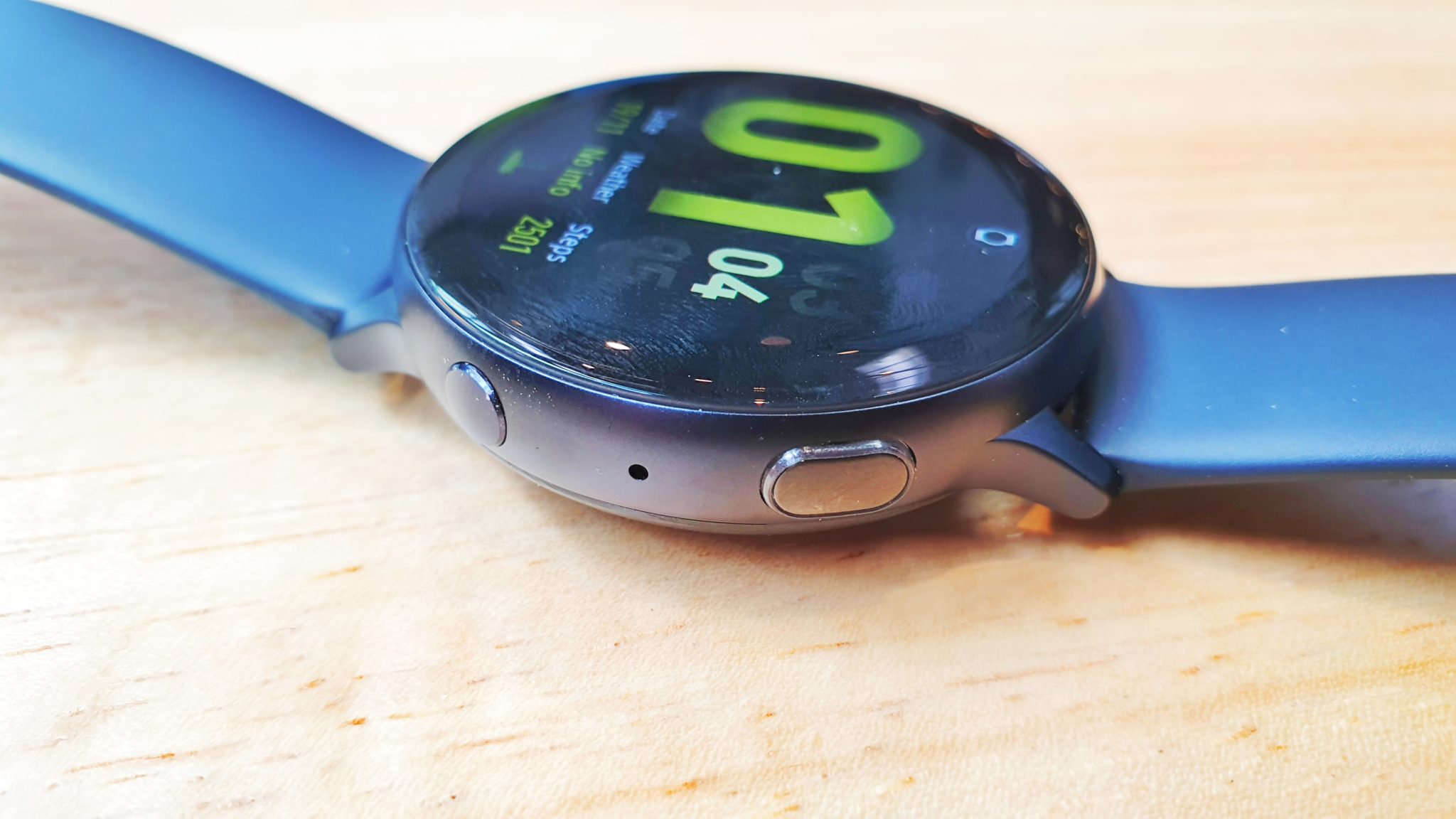 To get started, you’ll have to pair it up with a phone first and there’s several additional apps that you need to install before it plays along nicely with it though Samsung phones will have most of the firmware that you need pre-installed by default.

Like other Tizen wearables, you’re able to change watch faces by downloading new ones and also add in a modicum of new apps. There’s a smattering of games, a ton of watch faces, a variety of navigation apps with varying degrees of efficacy and, interestingly enough, you’re even able to watch YouTube clips on this by downloading an app but the screen the size of a postage stamp so it’s probably something you’d do on a lark or only under the direst circumstances. You can also browse the web on this but typing in text via the T9 keypad is a laborious task and navigating websites is a chore on account of the small display.

Unfortunately, not much has changed with the breadth and depth of app variety on the Galaxy App store and there isn’t much third party support available and many apps require you to fork out cash too but you still have most of the essentials in regards to fitness tracking already baked in.

Apps notwithstanding, the Galaxy Watch Active2’s core functions as a fitness and health tracker remain intact with the ability to track a variety of workouts – 39 in total – including swimming. You’re also able to track your sleep quality and also fire up a breathing exercise app to relax and calm down if the need arises. Much in the fashion of other wearables, the Watch Active2 also prods you with reminders to get up and walk around if you’re sitting behind a desk for too long. 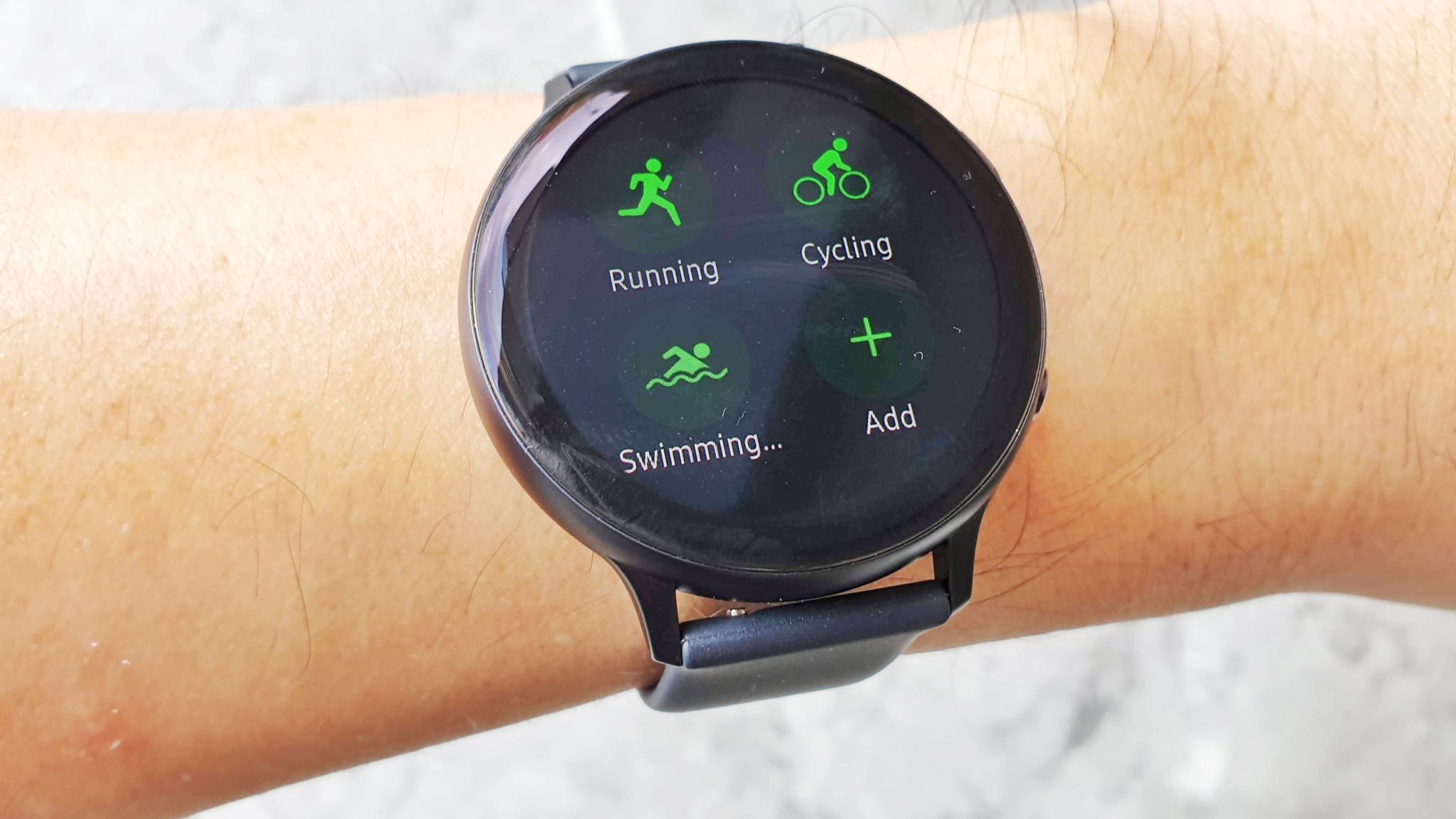 Of note with the Watch Active2 is a novel My Style algorithm which changes the watch face to suit your outfit after you take a snapshot of your chosen garments with your phone which is something that hasn’t been done before with other phones.

When taken for a whirl for a couple of weeks, the watch performed in a similar fashion as the original Watch Active and tracked most of our activities with a modicum of precision. Most of the basic ones like walking, running and the like were tracked relatively accurately and it was able to track our walks and runs down to within several meters or so. The heart rate tracker works as it says on the tin and accurately tracked our ticker at rest and over the course of our commute over the course of the week. 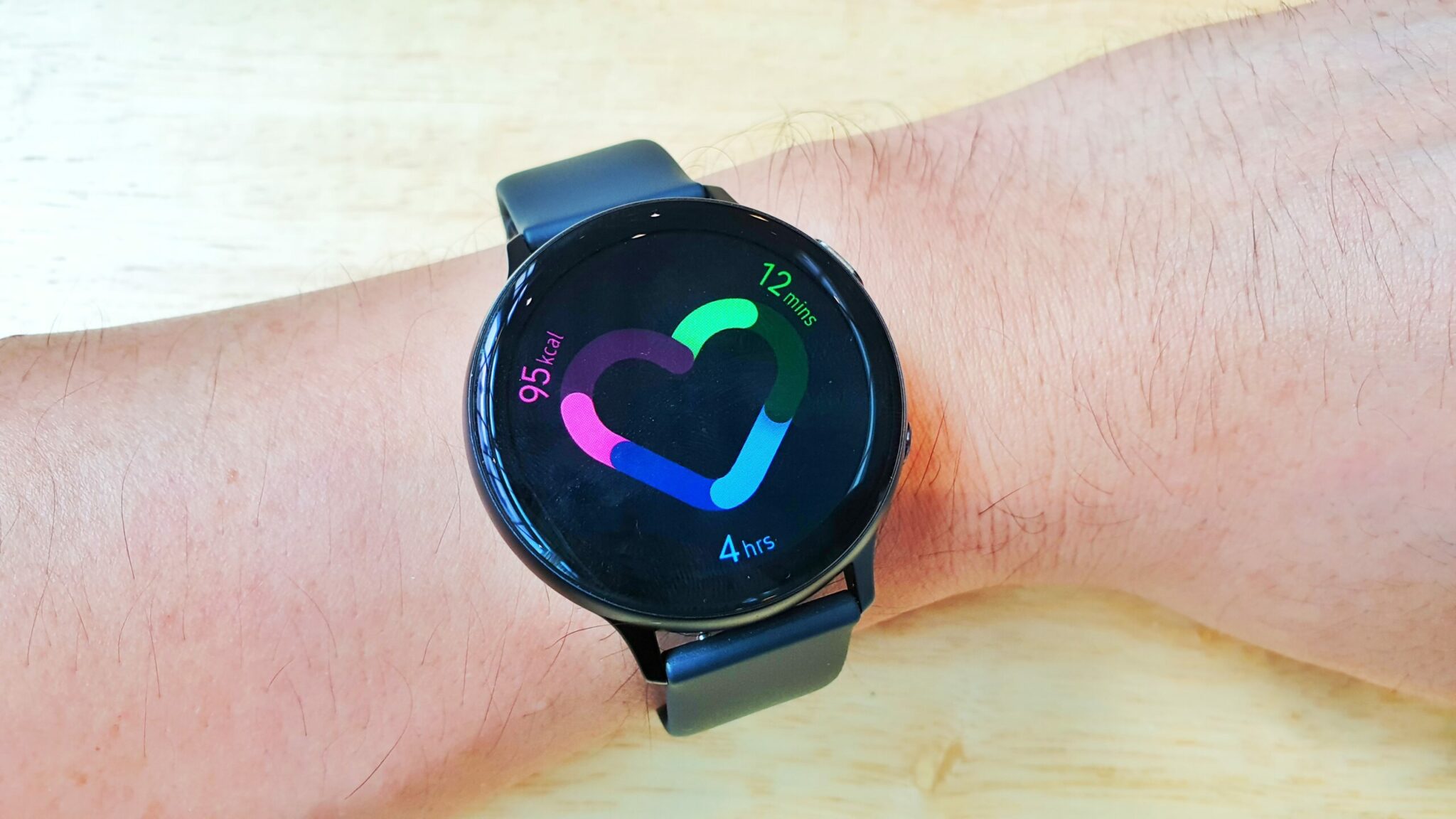 The provided speakers are serviceable in a quiet environment but are too small to make a difference when you’re outdoors so you’ll still need to tote around a pair of wireless earbuds if you want to catch a tune or two.

The watch also offers ECG functionality for medical-grade heart monitoring though this requires regulatory approval so this feature is not activated in Malaysia. It also apparently has fall detection too in a fashion akin to the Apple Watch but there’s no word on when or if these two features will be activated as yet in Malaysia.

The watch has a 340mAh battery but the larger display size means that it also draws more juice. After fully charging it, we managed to eke out just short of two days worth of battery life which is decent but unremarkable. 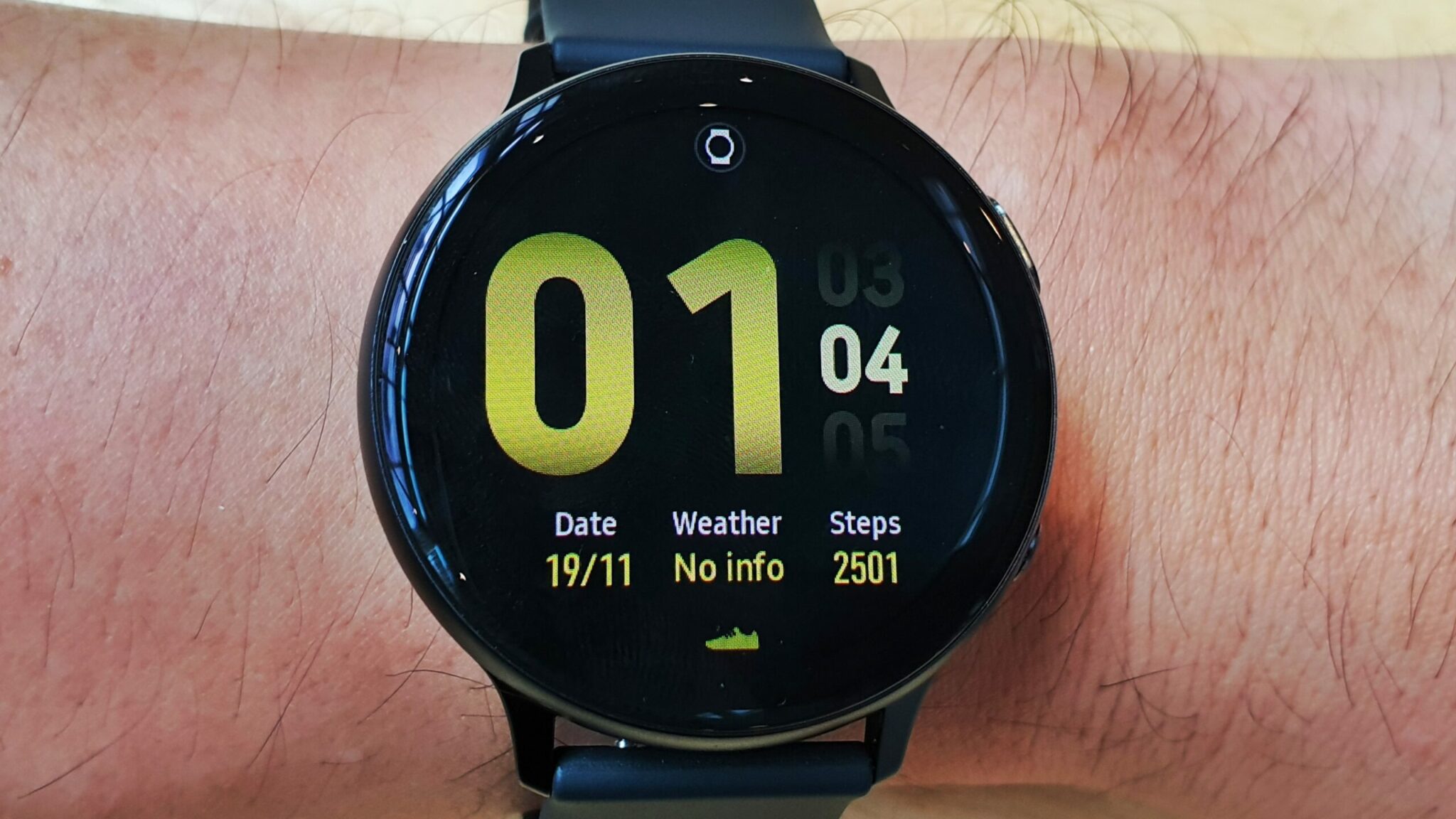 As it stands, the Galaxy Watch Active2 is a good looking and well crafted smartwatch with solid fitness tracking functionality and one of the best user interfaces ever seen on a smartwatch via Tizen OS. Unfortunately, it’s not a particularly compelling upgrade if you already own the original Watch Active but for those who have yet to hop onto the smartwatch bandwagon, it’s an excellent proposition.

What we liked Smooth and intuitive user interface, excellent display, fair two-day battery life, rotating bezel
What we didn’t Not many third-party apps, significant installation footprint on smartphone
We say The Galaxy Watch Active2 is a good looking and well crafted smartwatch with solid fitness tracking functionality and one of the best user interfaces ever implemented on a smartwatch via Tizen OS.