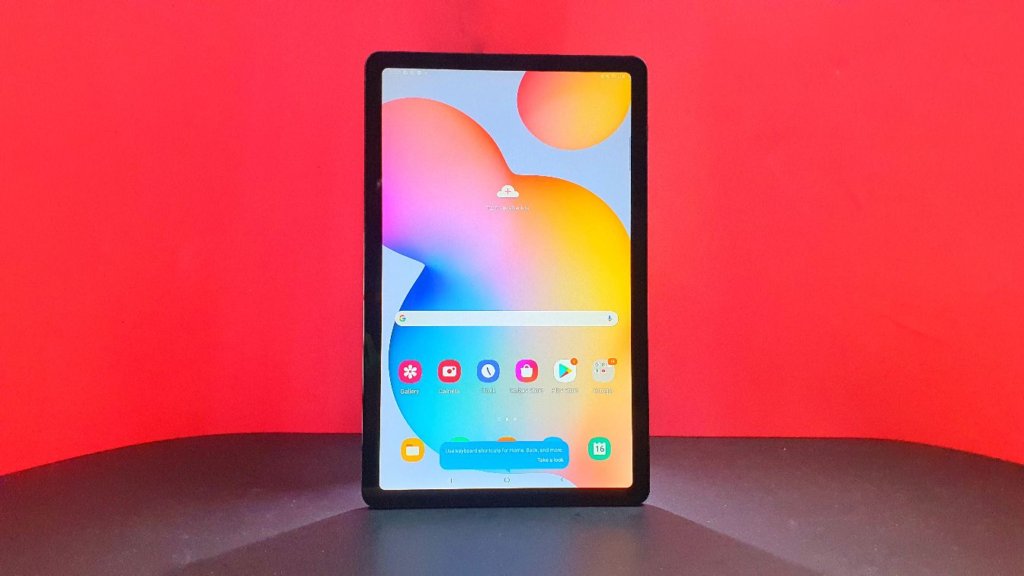 The Samsung Galaxy Tab S6 Lite is intended as an affordable productivity tablet and as a light laptop alternative at a reasonable price tag. For the price of entry, you get  a free keyboard cover along with a stylus to take notes and get some work done on the go. 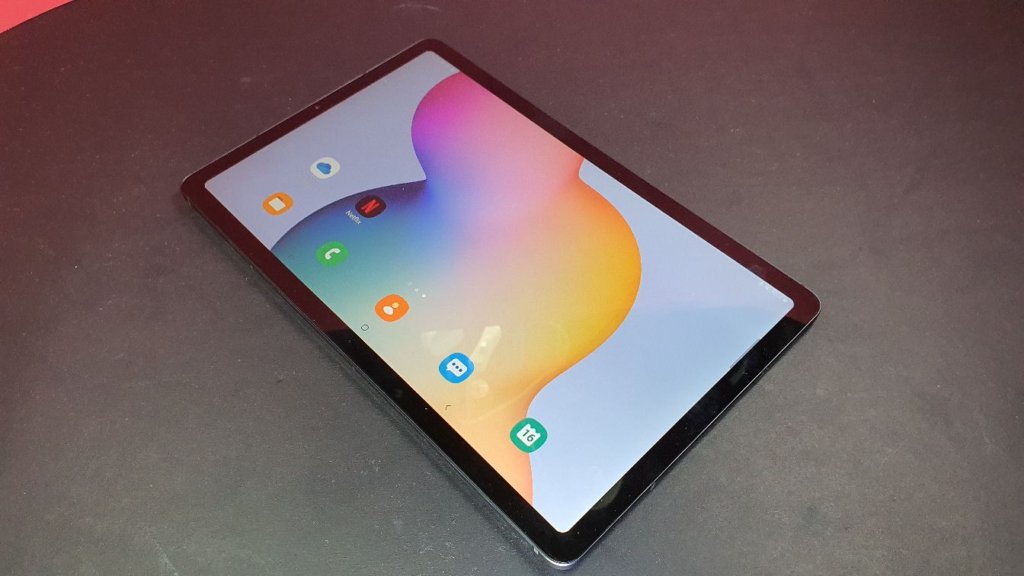 Externally, the Samsung Galaxy Tab S6 Lite is relatively slim and light as tablets go at 7mm thin while weighing 467g, making man-portable in a backpack or handbag. Up front, the tablet has somewhat thick bezels by 2020 standards that frame a 10.4-inch TFT display with 1,200 x 2,000 pixels resolution and a decent 223ppi.

Intended to be used landscape style, the Galaxy Tab S6 Lite has stereo speakers on the left and right sides with the left complemented by a 3.5mm audio jack and the right by a USB Type-C port. These sides correspond to the top and bottom if held vertically. Up top, the tablet has a volume rocker and a power button. 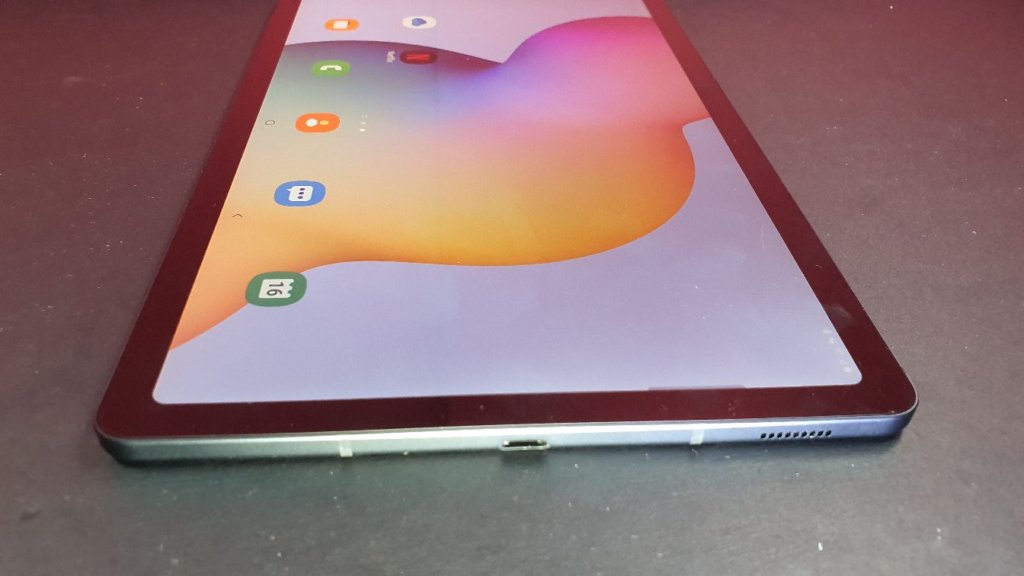 The backplate has a flat metallic finish with a rear-mounted 8MP autofocus camera but no flash while selfies and videocalls are tackled by a front-facing camera embedded into the bezel. The overall build quality is sturdy in keeping with Samsung’s high standards of quality. Security options include facial recognition via the selfie camera and the usual pattern unlocking but the tablet lacks a fingerprint reader. 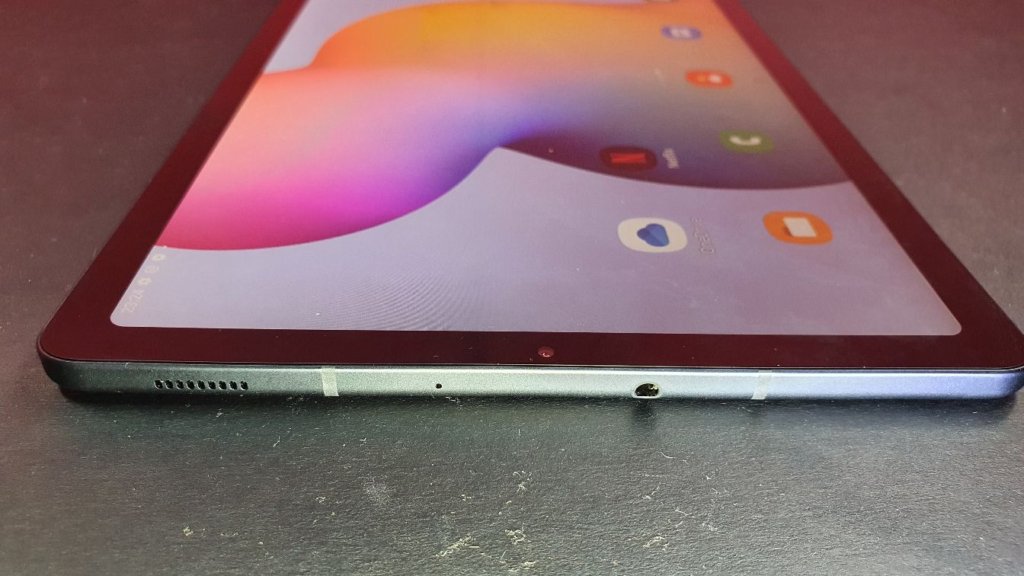 The left side of the tablet hosts a 3.5mm audio jack and one of the matching pair of stereo speakers

The bundled keyboard cover is a custom job made by Targus that is specifically made for the Galaxy Tab S6 Lite with a matte black faux leather finish and a form-fitted plastic tray that precisely fits the tablet. The fitting of the tray is exceptionally tight  to prevent it from falling out and it will require deliberate prying and fiddling to remove it from the tray which is reassuring over simply relying on magnets which have a tendency of being nudged out of place by misadventure. 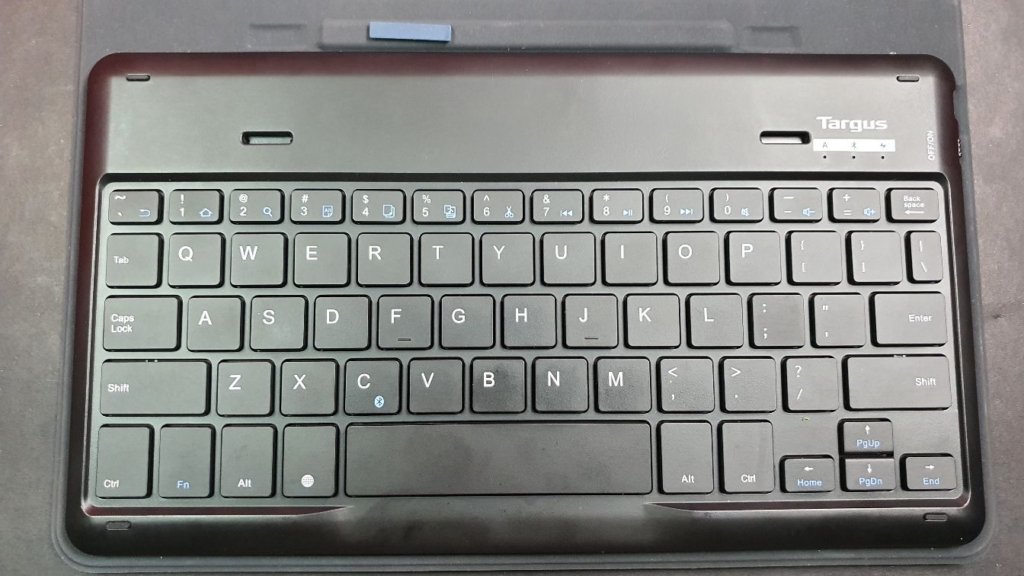 Rather than sporting grooves to prop it up, the cover opts for a rather unusual alternative solution as it uses a pair of prongs that latch onto holes in the keyboard to prop it up at the proper angle which is about 35-degrees or so. 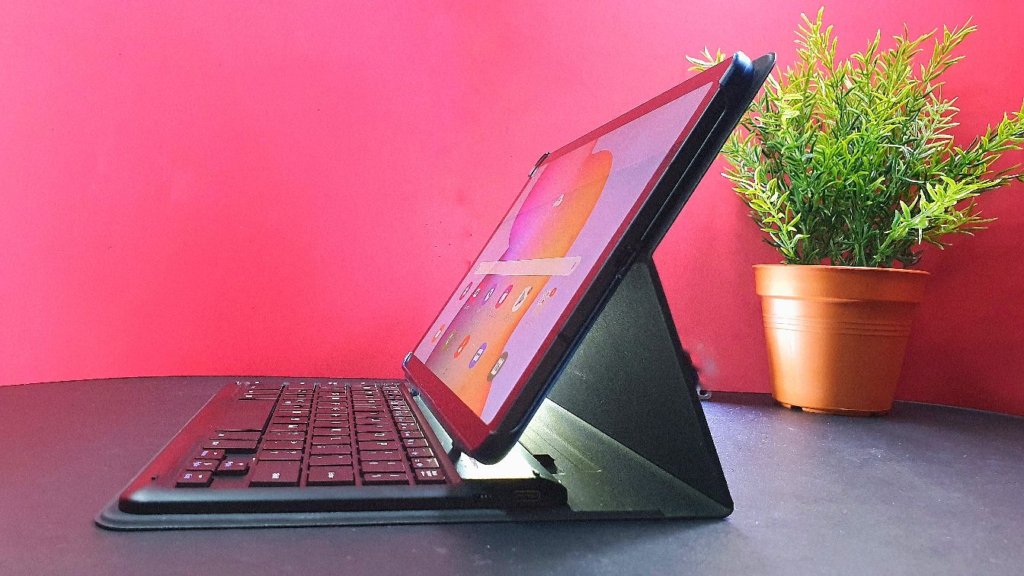 The keyboard is fairly compact, pairs up wirelessly via Bluetooth and retains a direction pad but omits a numeric keypad in keeping with most other wireless keyboards intended for tablet usage Charging it is via a USB Type-C port on the side.

In addition to the keyboard cover, the tablet also bundles in a full sized S Pen stylus that’s about the size of a normal pen and which has pressure and tilt sensitivity. The side of the pen sports a button to bring up their typical Air Commands that let you create notes, select text onscreen and more.

The Samsung Galaxy Tab S6 Lite runs Android 10.1 overlaid by Samsung’s own One UI 2.1 user interface on a midrange Exynos 9611 octacore processor paired with 4GB RAM and 64GB of onboard storage. If you need more space, you can add additional storage via a microSD card slot. While 4G variants exist in other regions, the version sold in Malaysia is strictly relegated to WiFi only.

On the hardware front, the Galaxy Tab S6 Lite has the following running under the hood:

If you’re a fairly observant reader, you’ll realise that the Exynos 9611 processor is very much the same SoC powering the midrange Galaxy A51 that we reviewed recently. In fact, the latest version of the Galaxy A51 has almost double the amount of RAM that the Tab S6 Lite 6 has but when it comes to the crunch,  it’s still no slouch when it comes to getting work done.

In terms of synthetic benchmarks, the Galaxy Tab S6 Lite scored the following:

The modest midrange Exynos 9611 processor is a compromise of sorts which means there’s some choppiness and lag when initially loading apps and websites but it runs in a relatively smooth fashion afterwards. Multitasking is a bit on the slow side as well but if you’re circumspect of what apps you’re running, it’s not an insurmountable problem. 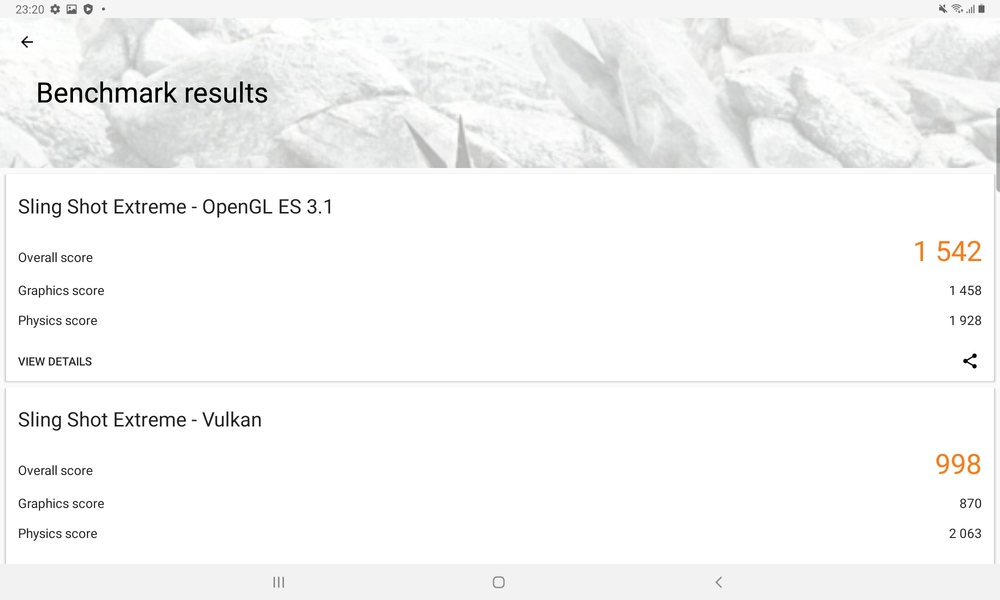 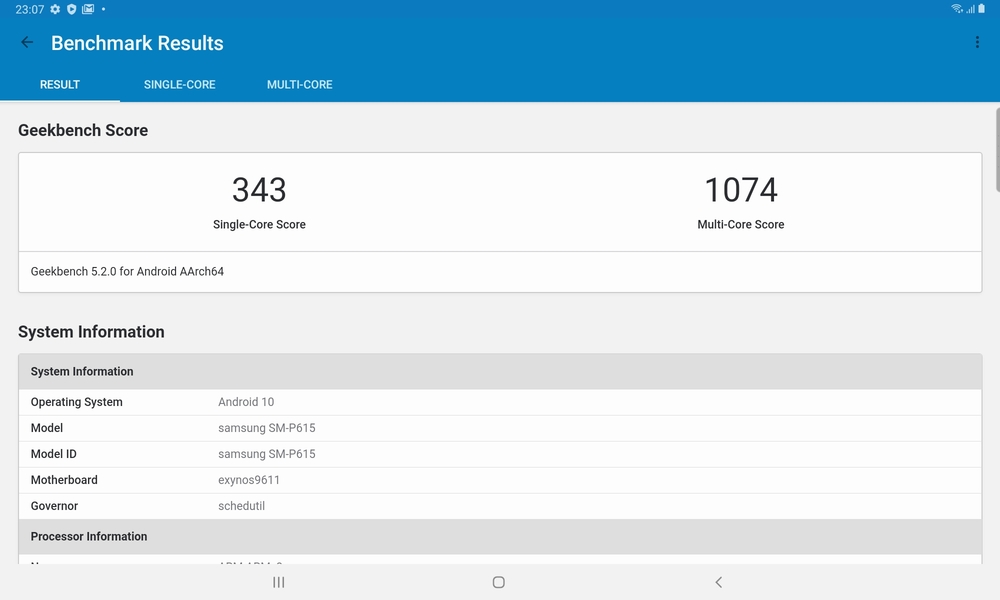 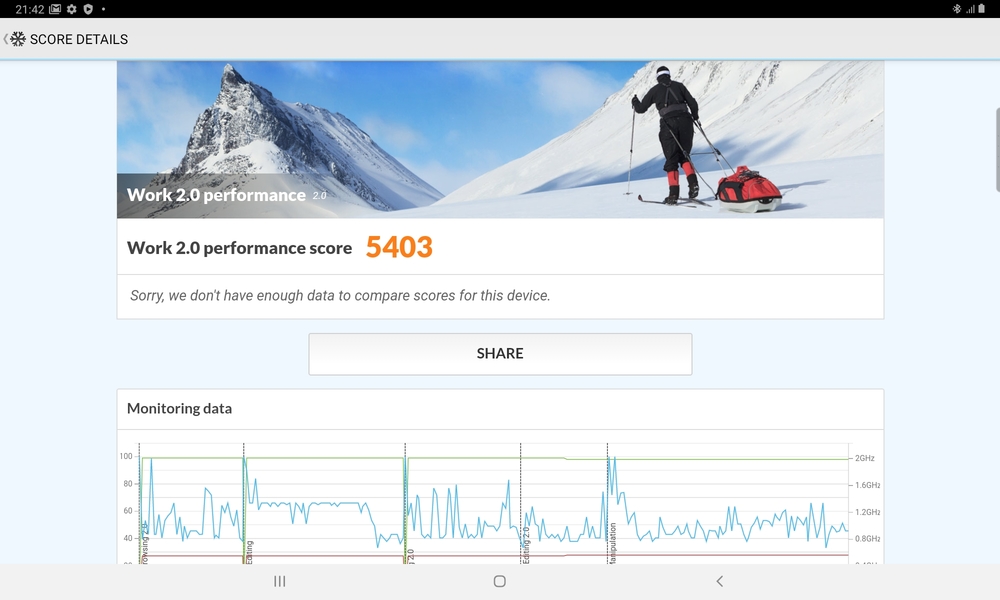 On the gaming front, it’s still a fairly capable device and is able to run Call of Duty mobile and PUBG. The large and vibrant display is more than sufficient for watching Netflix, YouTube and the like with the provided stereo speakers offering a pleasantly loud if not detailed listening experience. Screen clarity under daylight is fair though it’s best used indoors. 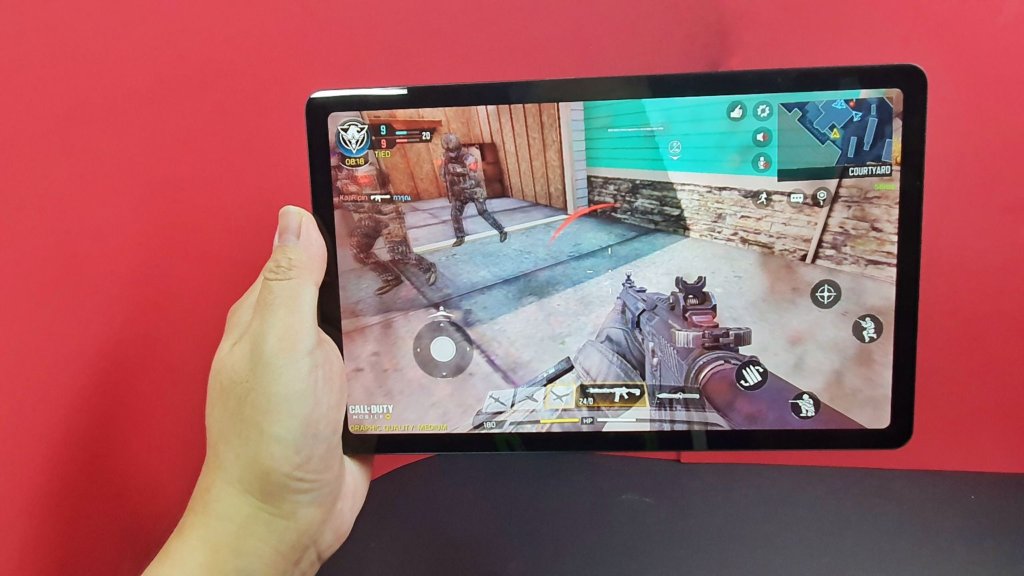 Needless to say, camera quality on either the front or home camera isn’t much to shout about but they’re sufficient to take a snap of your parking spot or a document if needed. 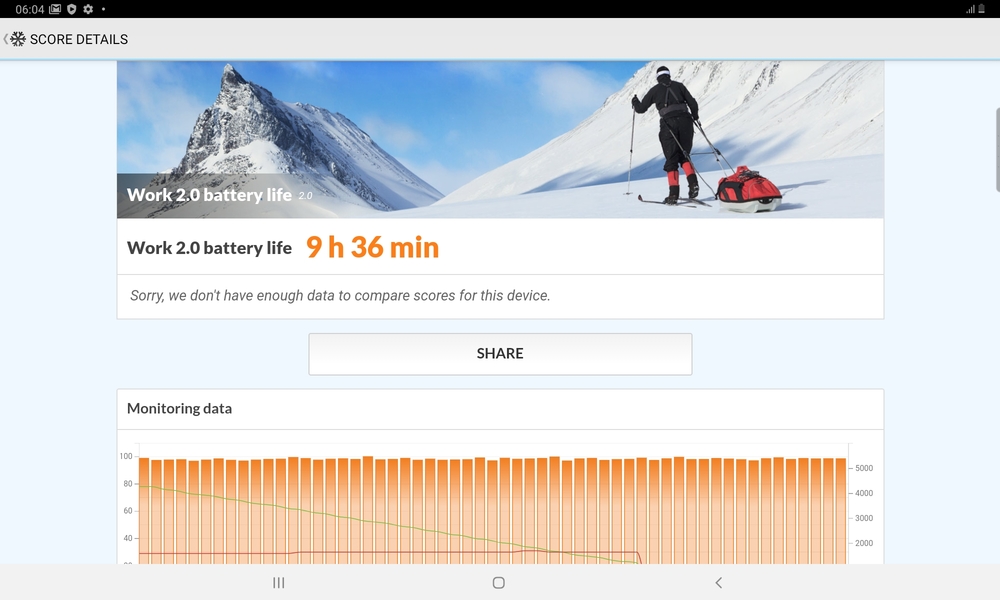 In terms of endurance, the Galaxy Tab S6 Lite is pretty good with the slate offering a good 10 hours of active usage with moderate screen brightness and WiFi on. In the PCMark battery life benchmark, it managed to get 9 hours and 36 minutes of battery life which is more than enough for a full day of work or lectures. Our test sample didn’t come with a charger but we managed to get it fully charged in about 2 hours on a 15W charger which is decent.

As the Galaxy Tab S6 Lite features an S Pen stylus, it packs much of the functionality of the Galaxy Note and other Tab series slates. You’re able to create your own notes, review all existing notes you’ve written, and perform Smart Select – in essence lassoing and copy pasting text or images onscreen – for usage elsewhere, do a screen capture and sketch on said image via Screen Write. Bringing these functions up is simply a matter of pressing the single button on the S Pen stylus when in close proximity to the display. 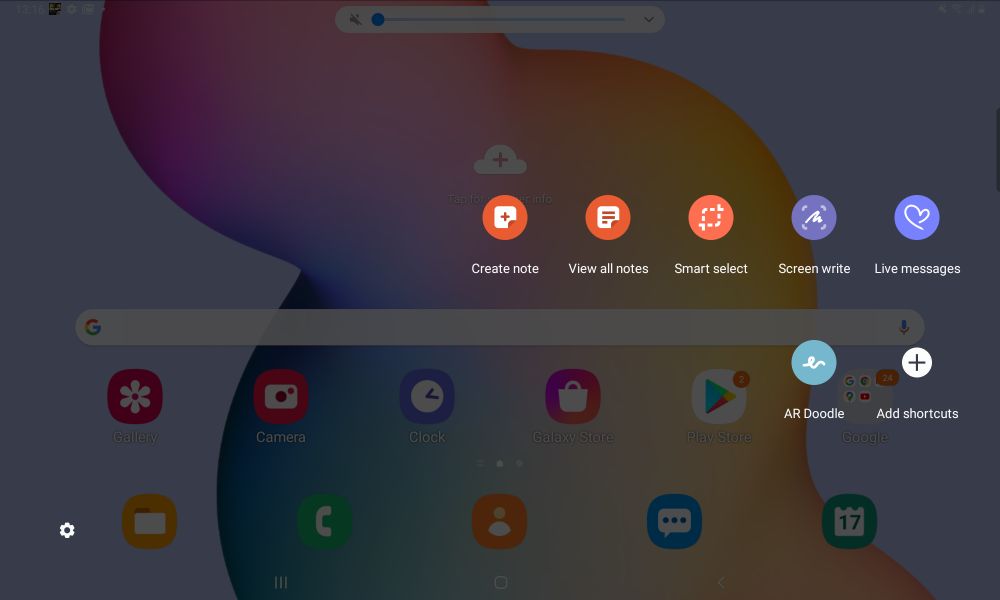 Users will enjoy quite a bit of utility from using the S Pen as you’re able to draw up as well as sketch detailed notes and then save them for later use. Writing on the screen is a comfortable affair with a smooth glide though adding screen protectors may affect this somewhat so you’d need to be wary.

For ardent note takers, you’ll appreciate the fact that Samsung’s Notes app is fairly smart enough to convert your handwritten scrawl into digital text; handy during lectures or briefings. It’s sensitive enough for sketching and other artistic endeavours. 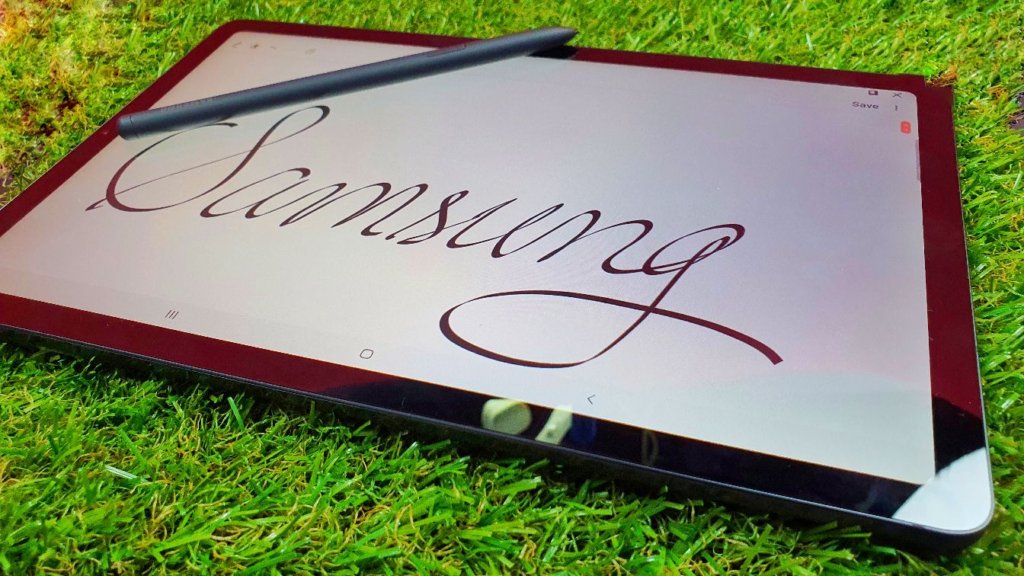 Fortunately, the S Pen itself is responsive and the larger size and heft makes it easier to use in the manner of a normal pen than the smaller ones used in the Galaxy Note series. 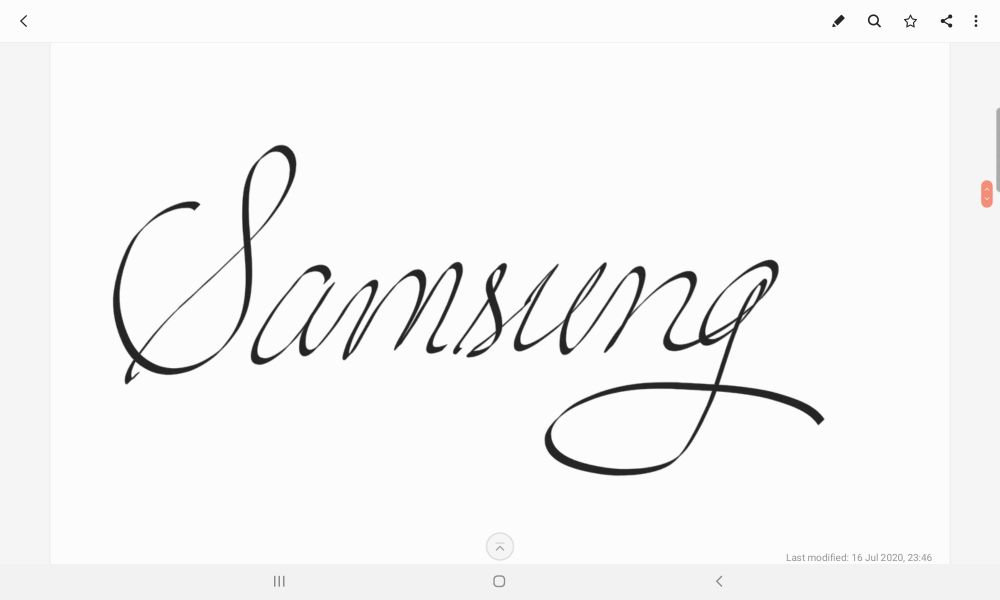 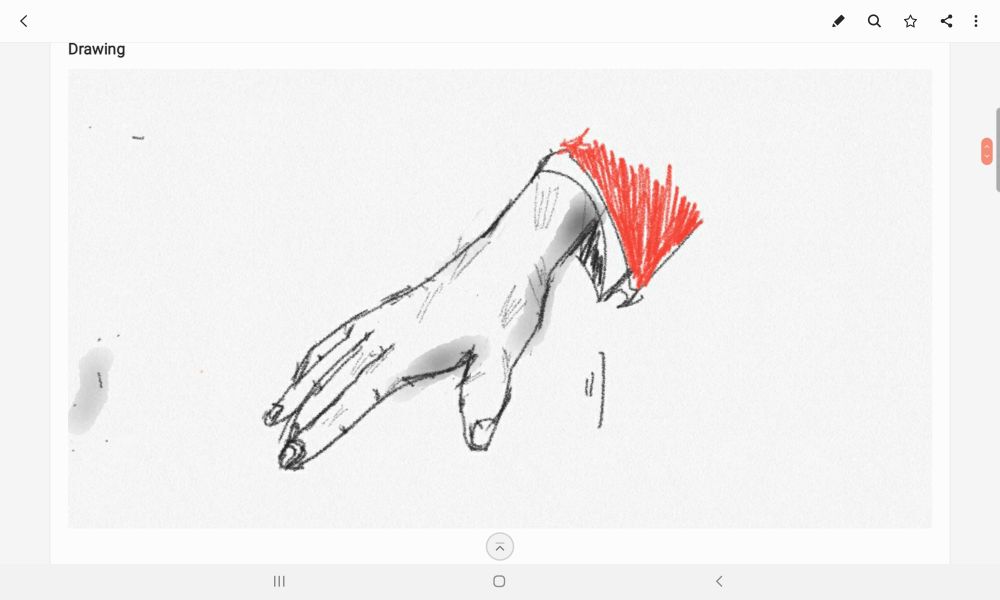 Unfortunately, the Galaxy Tab S6 Lite lacks Samsung’s vaunted DeX mode which means that it lacks a ‘desktop style’ interface with a taskbar and drag-and-drop icons though this doesn’t gimp the slate in the slightest as the usual Android interface easily gets you where you need to go with all menus and apps within easy reach. 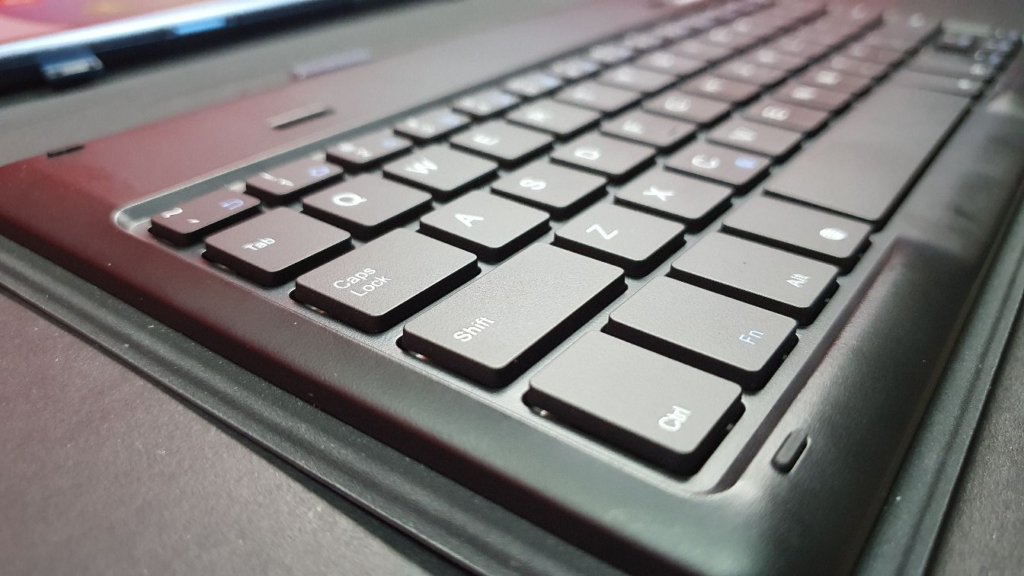 On top of note taking and doodling via the S Pen, the Galaxy Tab S6 Lite works well with Google Docs and Microsoft Word paired with the provided keyboard. Seeing the nature of its construction, it’s best used on a table as it’s still too wobbly for use on your lap but once properly set up, you can get a decent 110wpm on the keyboard. 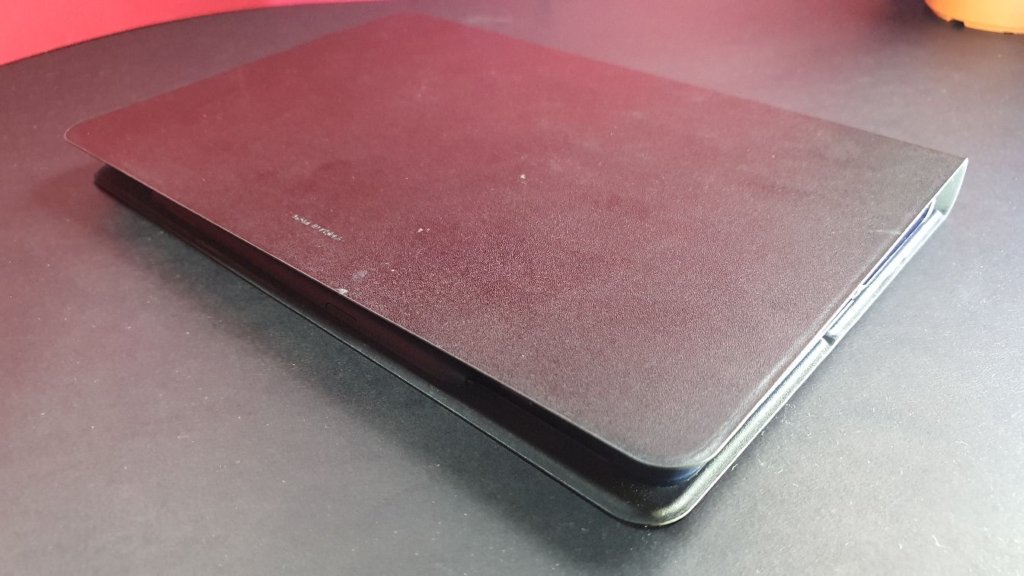 To be clear, you don’t necessarily need to use the provided keyboard cover and you can opt for any third party keyboard that connects via Bluetooth but the provided package lets you get ready to rock and roll straight out of the box.

For productivity purposes, the Galaxy Tab S6 Lite has enough pixel crunching power and the hardware to get sorted for Zoom calls and other current teleconferencing apps, hammer out emails and assignments or paperwork on the go, browse the web and take notes with the S Pen and keyboard.

The Galaxy Tab S6 Lite bundles in a decent keyboard cover and stylus while offering a large display, great battery life and offers a fair compromise of performance and capabilities for what you pay for. The addition of a stylus and keyboard mean it’s capable of a wider variety of tasks than what a usual laptop can tackle, especially in regards to note taking and drawing which gives it added utility for artists and more visually oriented professions like designers and desktop artists.

What we liked Good value bundle with keyboard and stylus, large display, responsive S Pen, long-lasting battery life
What we didn’t No DeX mode, integrated stylus well for the S Pen would be nice, no fingerprint reader
We say The Samsung Galaxy Tab S6 Lite bundles in a decent keyboard cover and stylus while offering a large display, great battery life and offers a fair compromise of performance and capabilities for what you pay for. 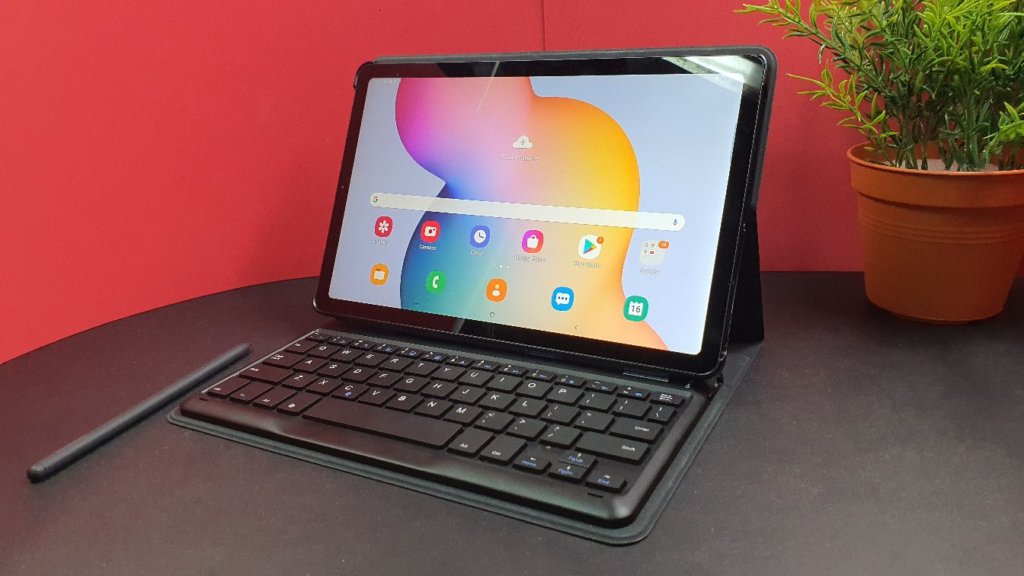 The Samsung Galaxy Tab S6 Lite bundles in a decent keyboard cover and stylus while offering a large display, great battery life and offers a fair compromise of performance and capabilities for what you pay for.