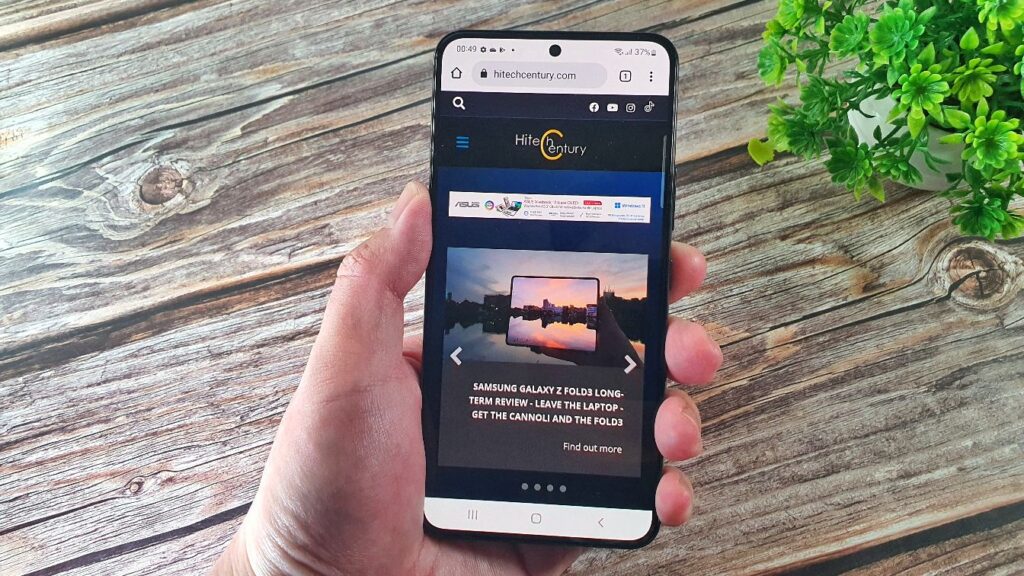 Fresh from their global debut at Galaxy Unpacked 2022, we managed to get our hands on the spanking new Samsung Galaxy S22 that is now on preorder in Malaysia. Part of a triumvirate of phones that also consist of the larger Galaxy S22+ and Galaxy S22 Ultra, the Galaxy S22 may be the smallest of the trio. 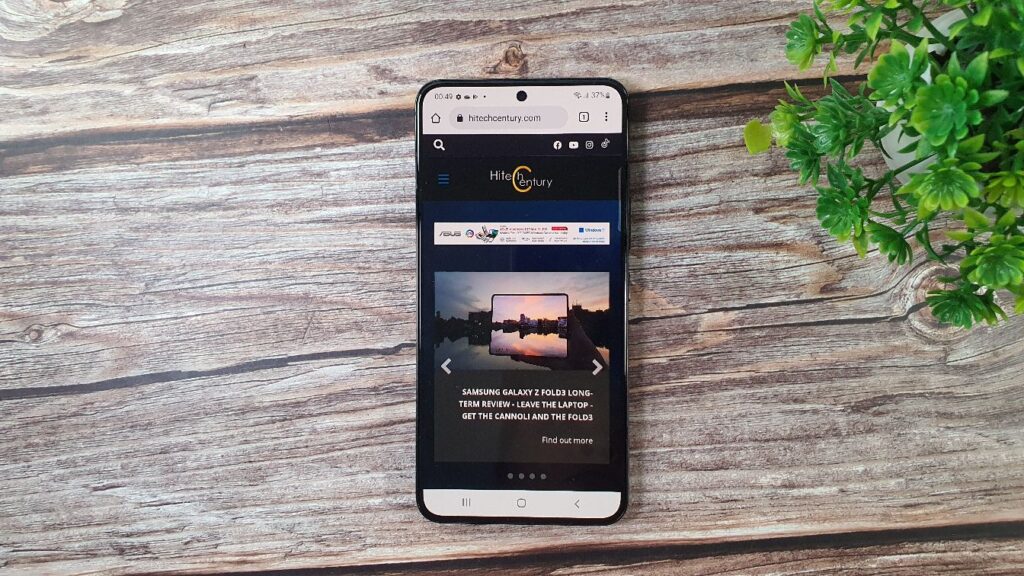 Even so, it’s every inch a flagship phone as Samsung has spared no expense in kitting the Galaxy S22 and its siblings out with the latest and best hardware from their foundries, including being the first Galaxy S-series phones in years in Malaysia to feature a Qualcomm Snapdragon processor but is it really worth the money? Here’s our Samsung Galaxy S22 first look where we give it our first impressions ahead of a full-on review.

Our Galaxy S22 review sample for Malaysia came in a matte shade of Phantom Black with a matching black camera housing. It can also be acquired in Phantom White, Pink Gold and a shade of green. 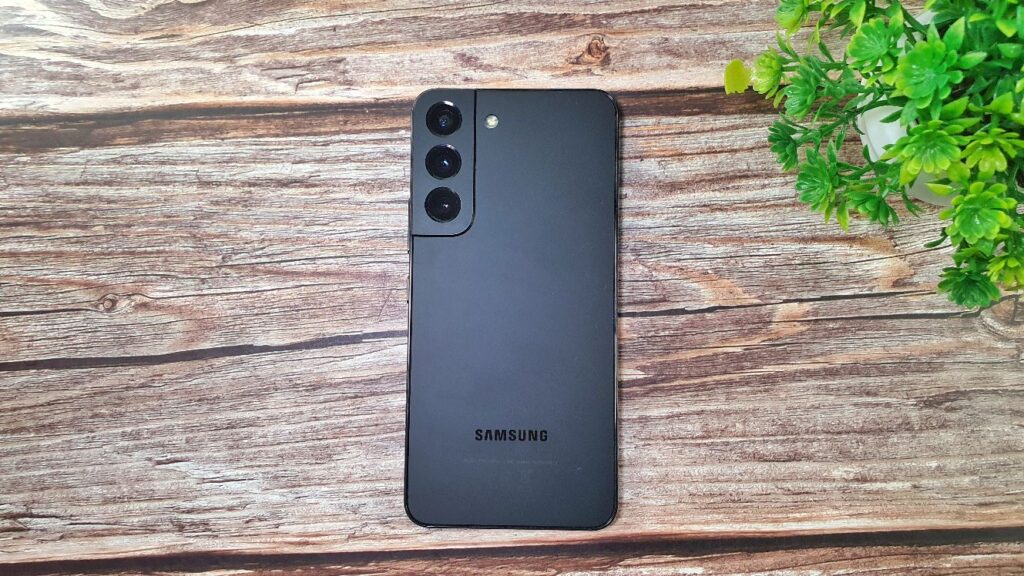 As far as aesthetics go, our Galaxy S22 first look was a pleasant surprise indeed. Contrasting with the matte black backplate, the sides of our Galaxy S22 review sample are finished in a reflective black finish while the matte black backplate is pleasantly smooth to the touch and wonderfully resists smudging. Unfortunately the sides of the phone still remain somewhat prone to fingerprints but it’s not that obvious except under direct scrutiny. 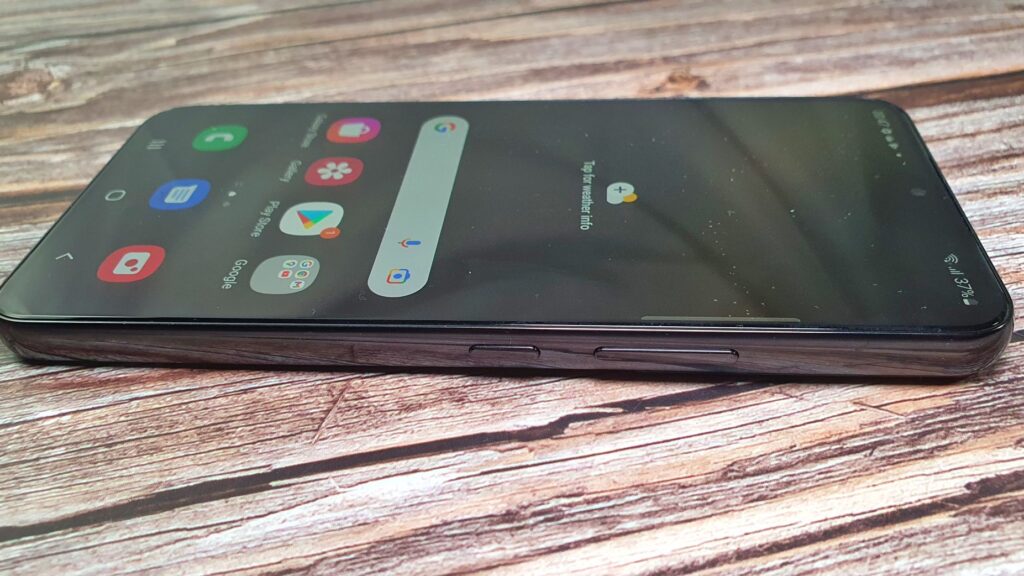 Housed within the contour cut casing itself is a triple camera array built around a primary 50MP camera with OIS, a secondary 12MP ultra wide angle camera and a 10MP camera with 3x optical zoom as well as OIS for judder free zoom shoots with the whole affair capable of up to 8K video capture.

The left side and top of the phone are otherwise bare but the right side features a power button and volume rocker while the bottom hosts a USB-C port, a speaker grille for one of half of the stereo speakers and a dual nano SIM card tray.

Up front, the Galaxy S22 packs a flat 6.1-inch Full HD+ Dynamic AMOLED 2X display, to use the official nomenclature which has a dynamic 120Hz refresh rate, consistently thin bezels on every edge and a tiny punch hole for the front facing 10MP selfie camera which is capable of up to 4K video capture. 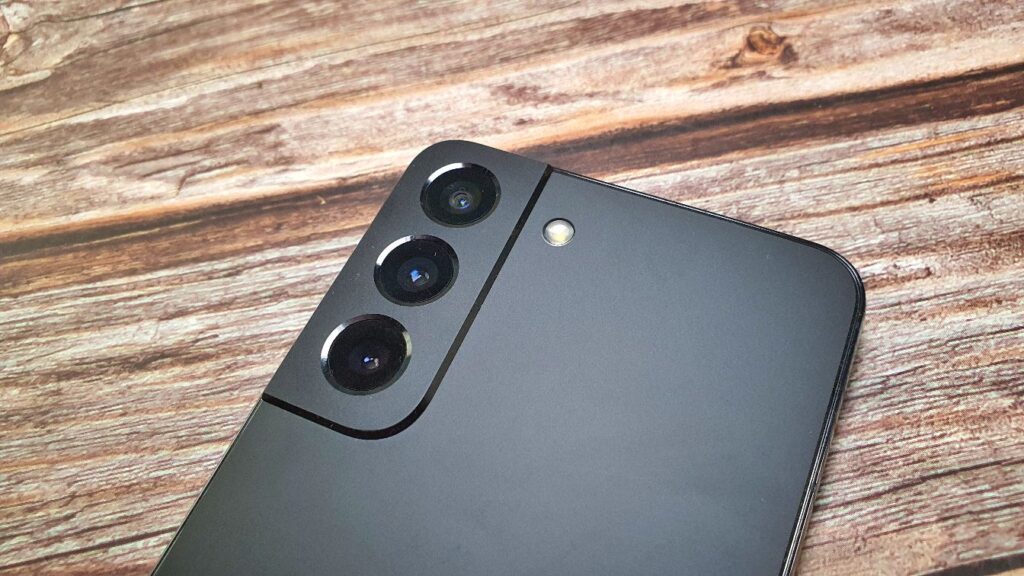 When held, the Galaxy S22 looks and feels wonderfully premium to the touch with an exquisite heft and tactility that only a flagship device from Suwon can offer. The compact size of the Galaxy S22 also makes it ideal for more petite users and those looking for a smaller phone that can be used one-handed without issue.

Much like its predecessor, the Galaxy S22 has a dearth of accessories bundled with the phone and bar the phone itself, it only features a USB-C cable and lacks a bundled charger.

Samsung Galaxy S22 First Look – What is it made of?

That’s not all, Samsung hasn’t skimped on anything here and the frame of the Galaxy S22 is made from their upgraded Armor Aluminum metal alloy that’s rated as 10% tougher than the conventional  aerospace-grade aluminium alloy used by many other competing phones. 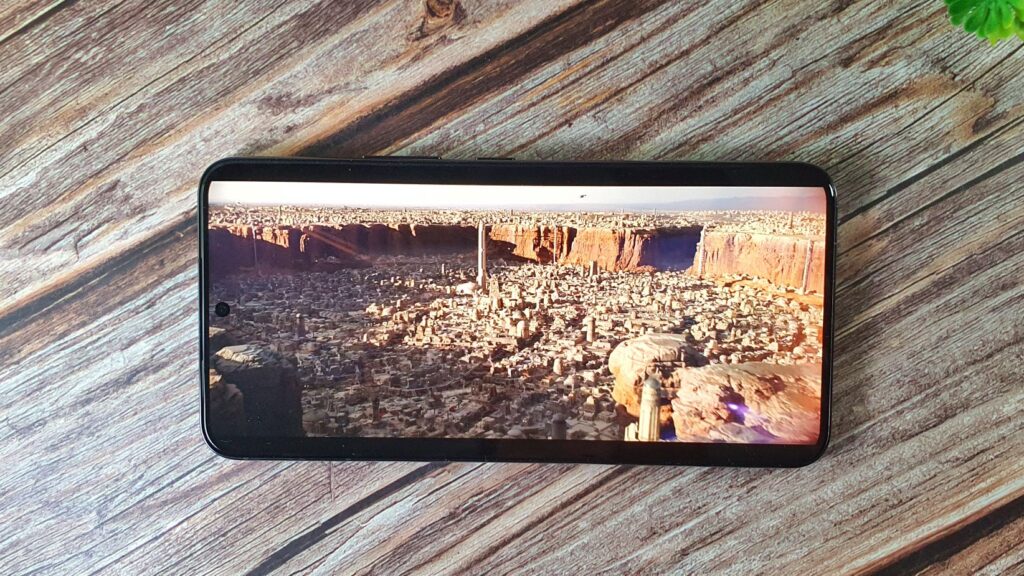 More astute readers will note that Armor Aluminum was first introduced in the chassis of the Galaxy Z Fold3 that was released last year. The modest trade-off here is that the Galaxy S22 doesn’t have a pre-applied screen protector though it’s also a testament to its durability that they figure it doesn’t actually need one out of the box.

On top of being hewn from Armor Aluminum and sandwiched between two slabs of Gorilla Glass Victus+, the Galaxy S22 is armed for bear under the hood.

For the first time in years, the Galaxy S22 comes packing a Qualcomm Snapdragon 8 Gen 1 processor rather than their in-house Exynos series CPUs. Traditionally, Samsung has issued Exynos chips for almost all of their Galaxy S series flagship phones but this, bar a few exceptions, marks the first time a Snapdragon CPU is issued in the Malaysia market.

The Galaxy S22 also comes packing 8GB RAM as well as your choice of either 128GB or 256GB of non-expandable storage. Here’s how it stacks up on paper:

One of the key improvements emphasised with the Samsung Galaxy S22 was its camera performance and we’ve managed to take several shots in various light conditions with rather pleasing results. You can check out our test shows below. 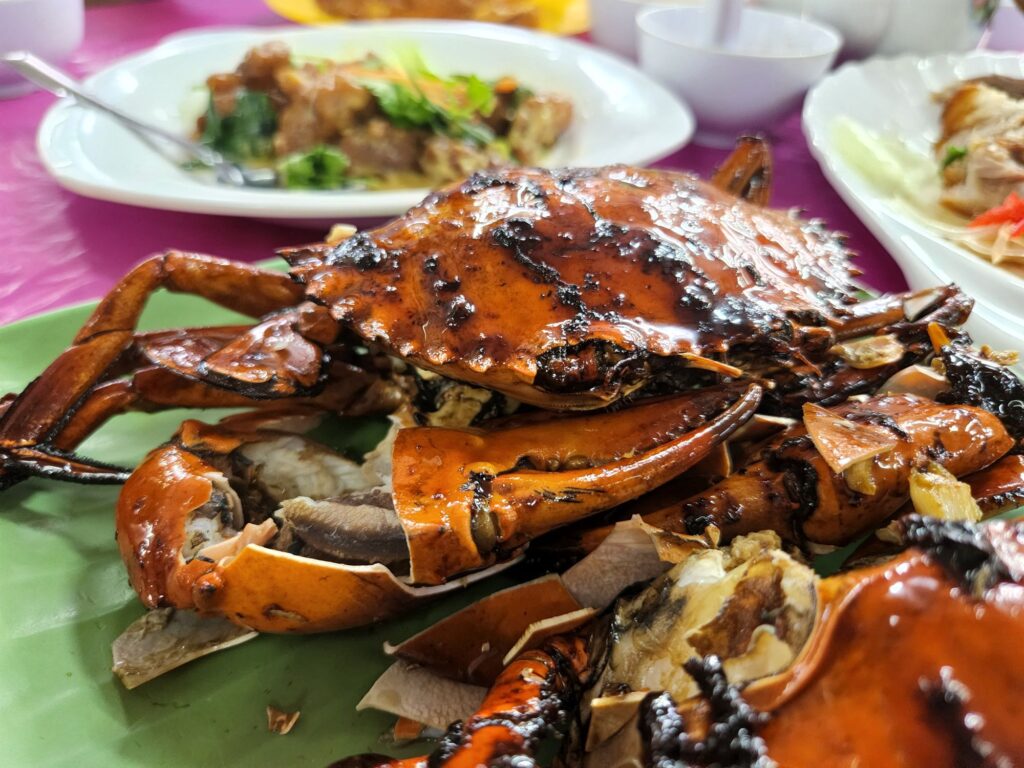 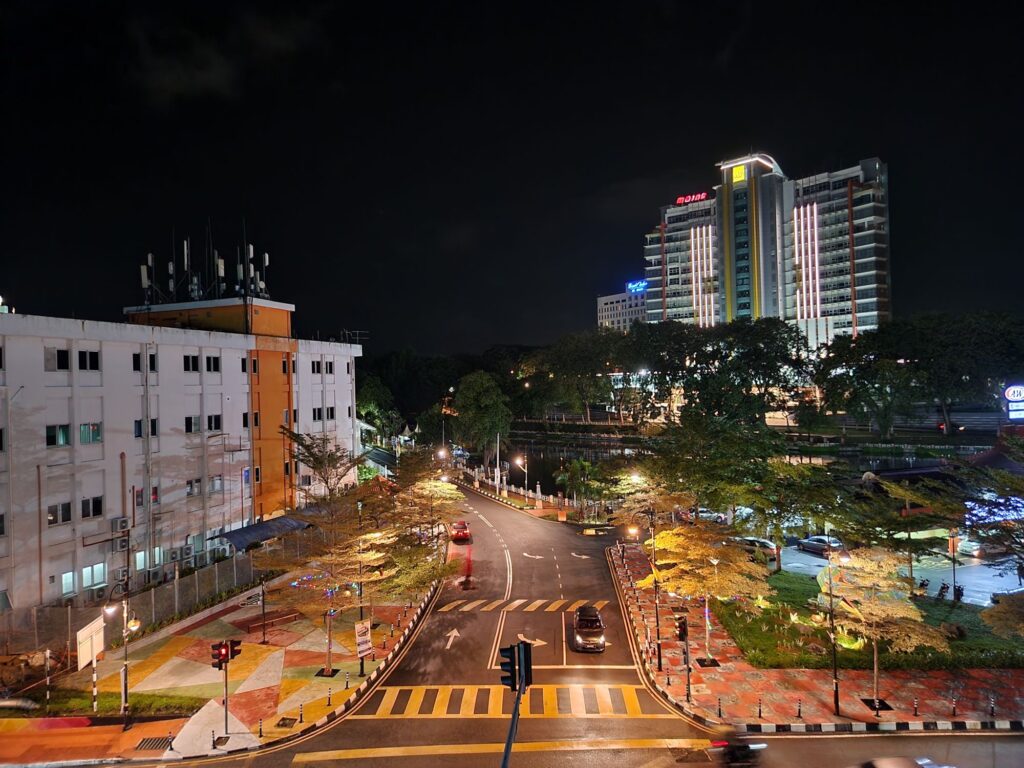 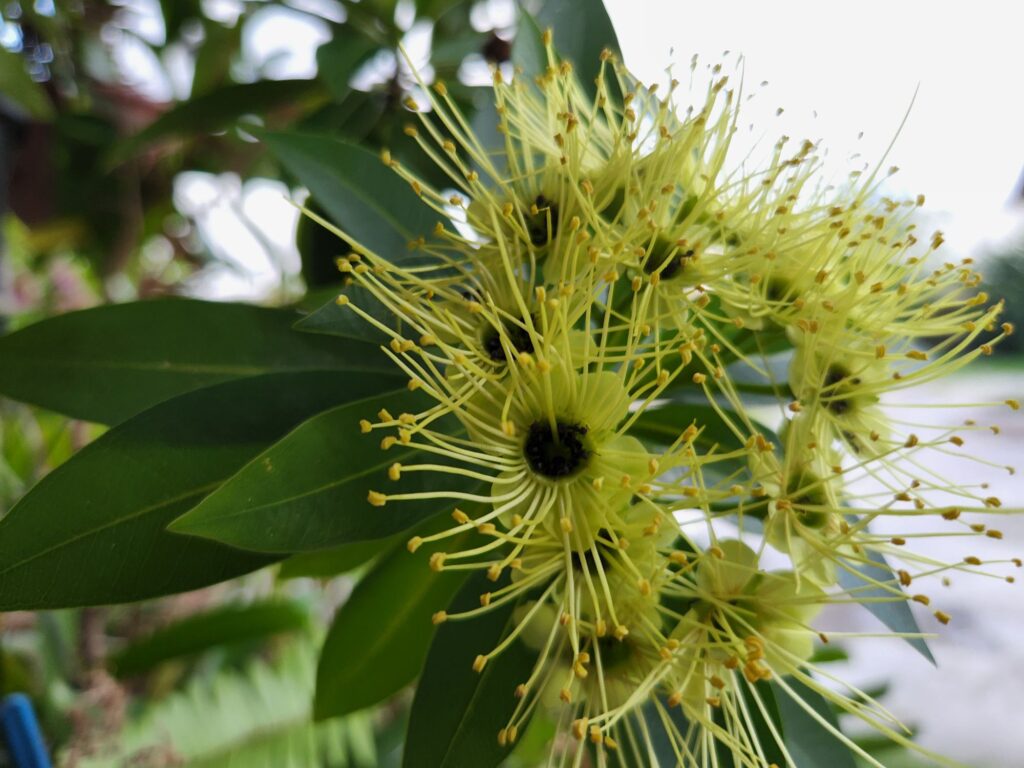 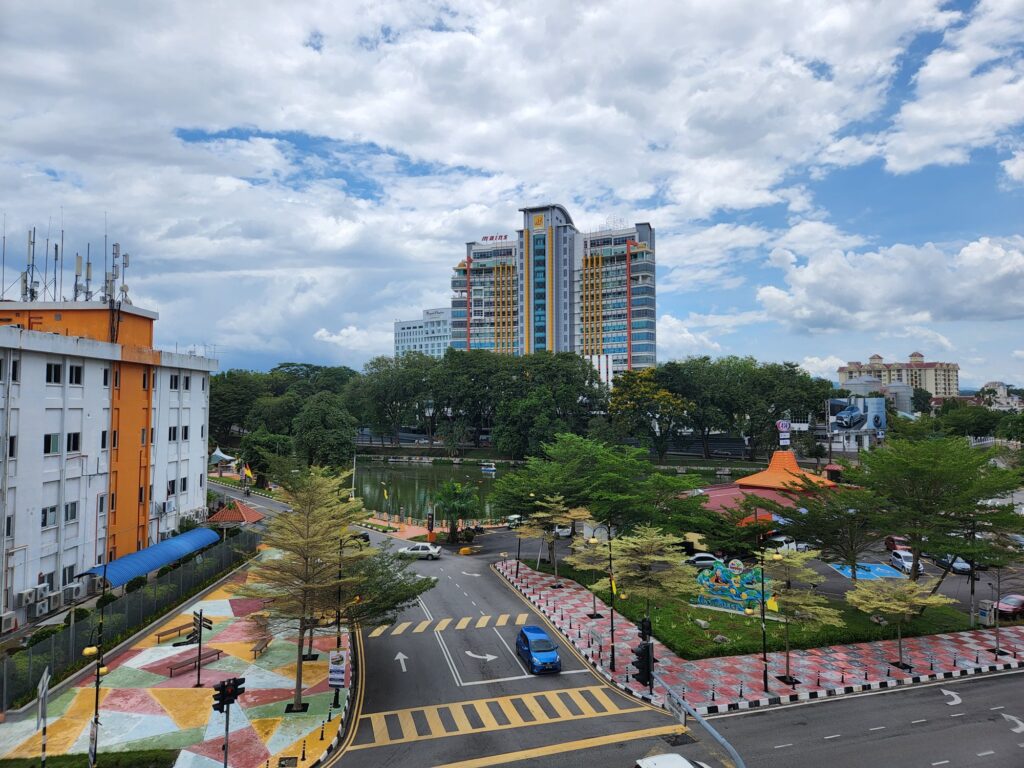 Our Galaxy S22 first look was certainly promising and once we’ve put it through its paces, we’ll share our findings in a full-on review!