A Glimpse of the Future with the Galaxy Fold

It has been a circuitous road for the Samsung Galaxy Fold since it was first announced earlier this year at Mobile World Congress 2019 in Barcelona. Just at the cusp of its slated debut in May this year, reviewers discovered a few technical hiccups and it was then sent back for a refit. Now, after waiting with bated breath for several months, it’s finally here. 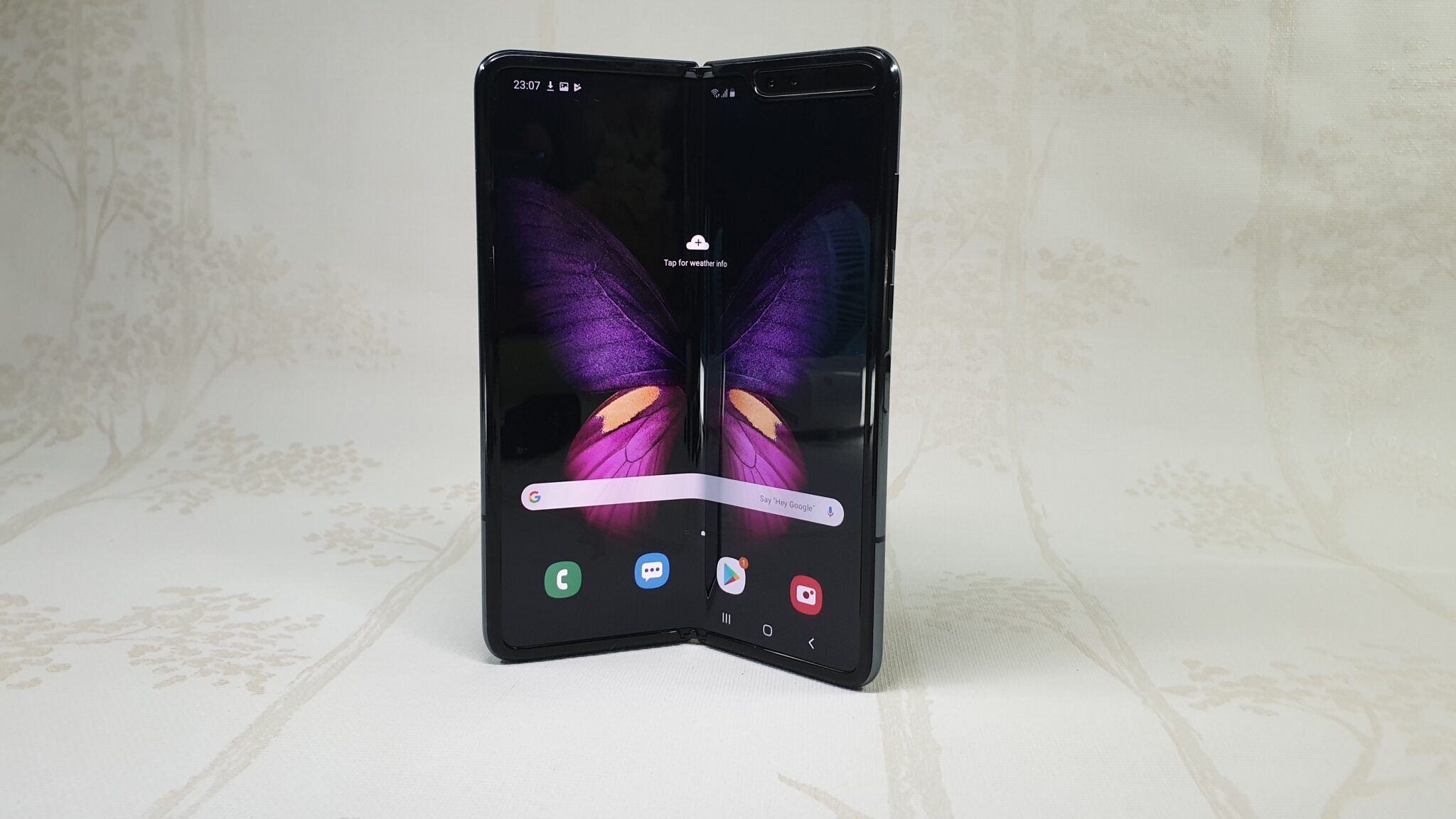 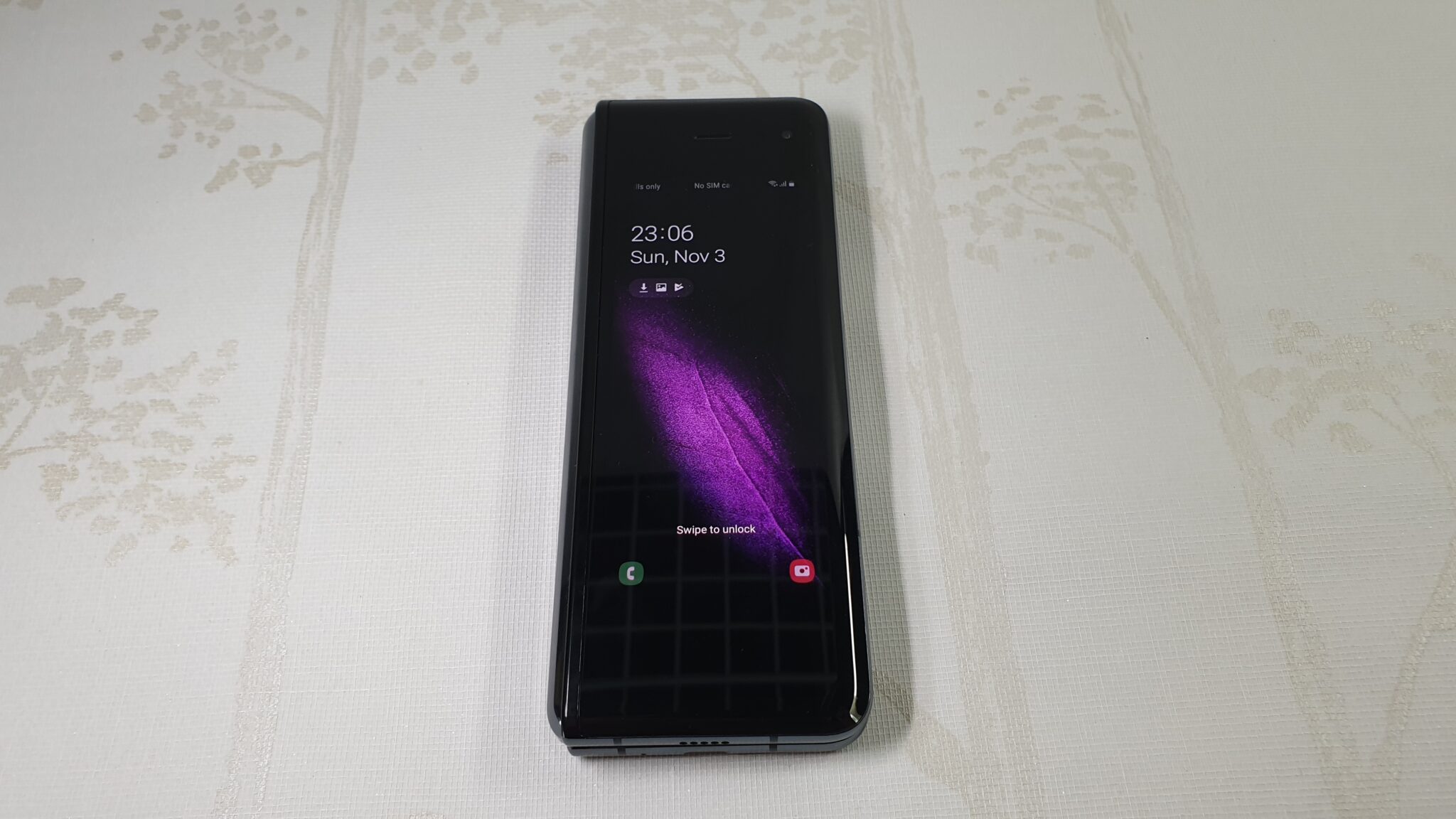 The new redesigned Galaxy Fold is functionally similar to the version released to reviewers earlier this year but sports several design enhancements in the form of a protective metal sleeve as well as ends caps to protect the folding mechanism much in the manner of the spine of a book in order to ensure dust or debris doesn’t clog it up. 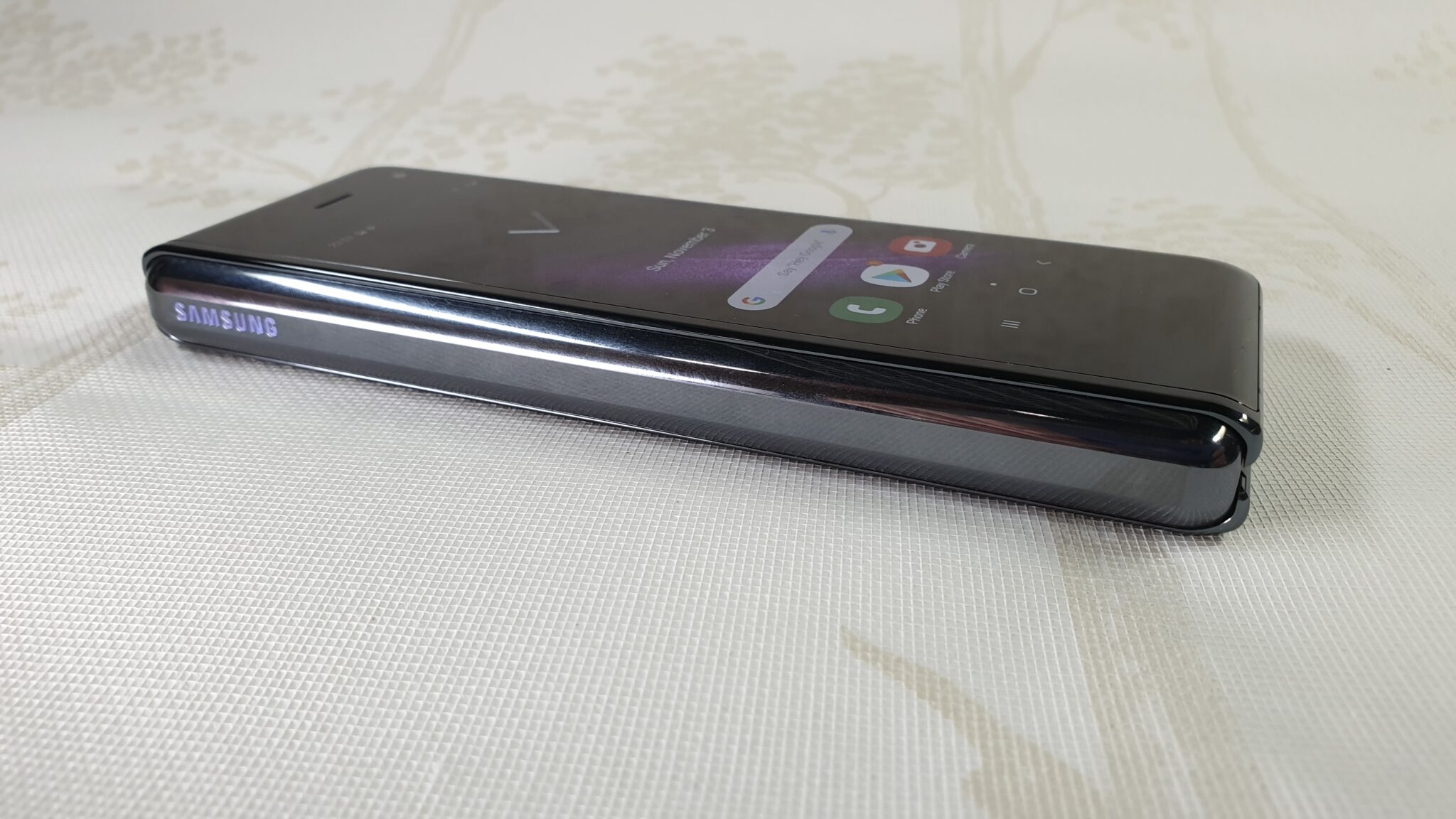 The Galaxy Fold now has a protective cover that armours the mechanism from dust and dirt.

The other technical enhancement is that the corner edges of the flexible Infinity Flex polymer display which were prone to tampering from overly enthusiastic users who thought it was a screen protector are now tucked under the bezels itself, rendering it effectively tamper proof.

Befitting Samsung’s most expensive and innovative phone, the Galaxy Fold offers quite a unique unboxing experience. The matte black box slides apart to reveal the rest of the contents within. The Galaxy Fold itself is nestled in a separate cardboard box on top of its accessories and this time around, there are liberal warnings emblazoned on a cheat sheet slapped on top of the Galaxy Fold itself. 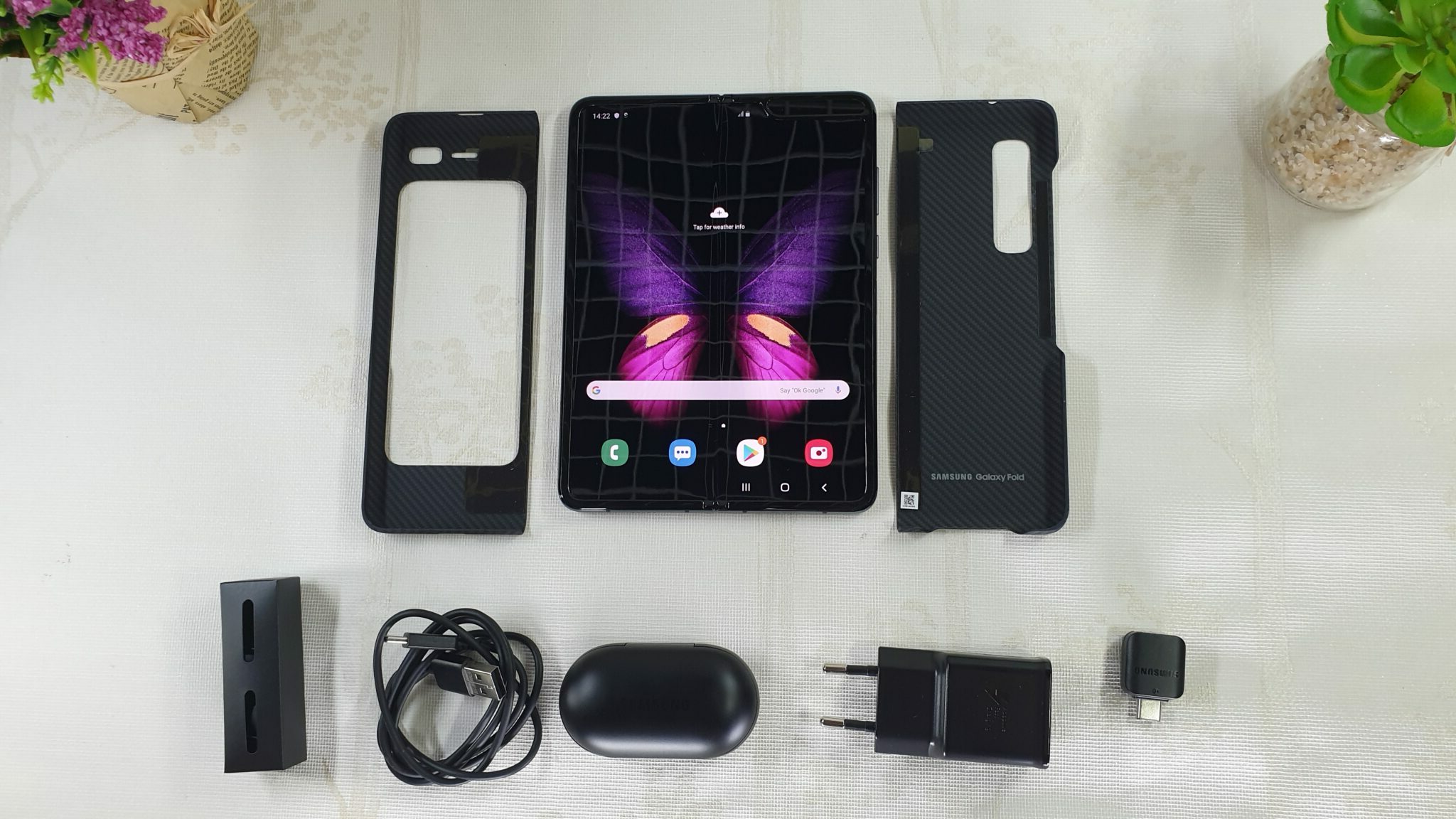 These differences aside, our test unit of the Galaxy Fold packed the phone itself, a protective polycarbonate casing that snaps on to each side of the Fold, a USB Type A to Type C adaptor, a SIM ejector pin, an 18W charger with accompanying USB Type-C cable and befitting its status as Samsung’s most powerful phone, a free pair of wireless Galaxy Buds.

The addition of the buds is an incredibly generous gesture and if you think about it, the buds themselves are already worth RM499 though there’s a reason for that as the Galaxy Fold lacks a 3.5mm audio jack. 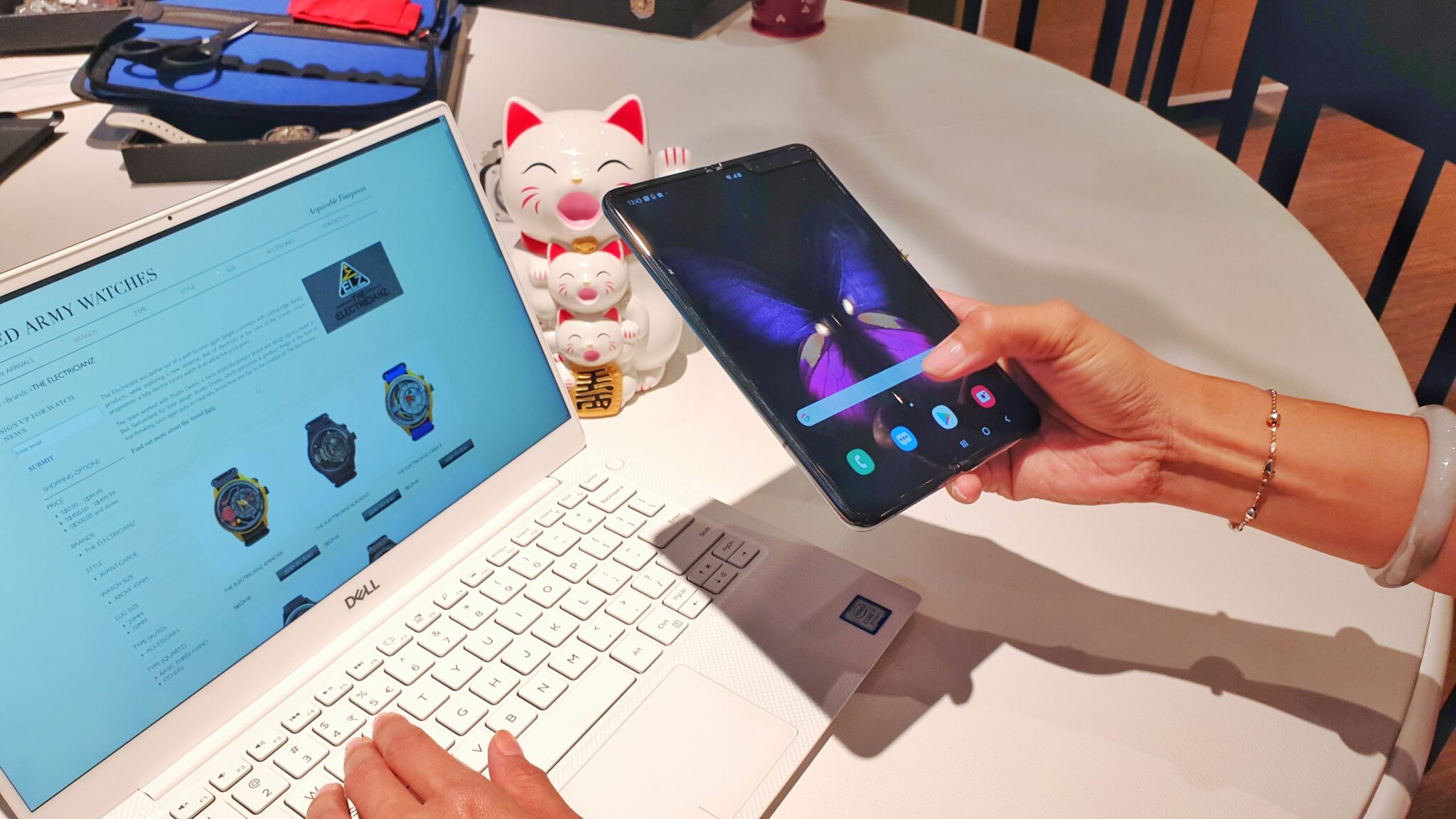 Closer inspection of the plastic protective casing reveals a matte external finish and a set of adhesive strips on the inner lining that you can peel off before attaching to the Galaxy Fold to ensure it sticks.

This is somewhat unnecessary though as the casing itself neatly and securely snaps onto the phone without the need for the additional adhesive strips. This is a nice touch as buying a casing for something as unique as the Galaxy Fold in the market is all but impossible seeing its unique foldable design.

First impressions of the Galaxy Fold

Holding the Galaxy Fold is quite an experience as it is rather heavy at 276g, almost double the weight of a single Galaxy S10 but it has an even heft when fully deployed in tablet mode or closed in phone mode. 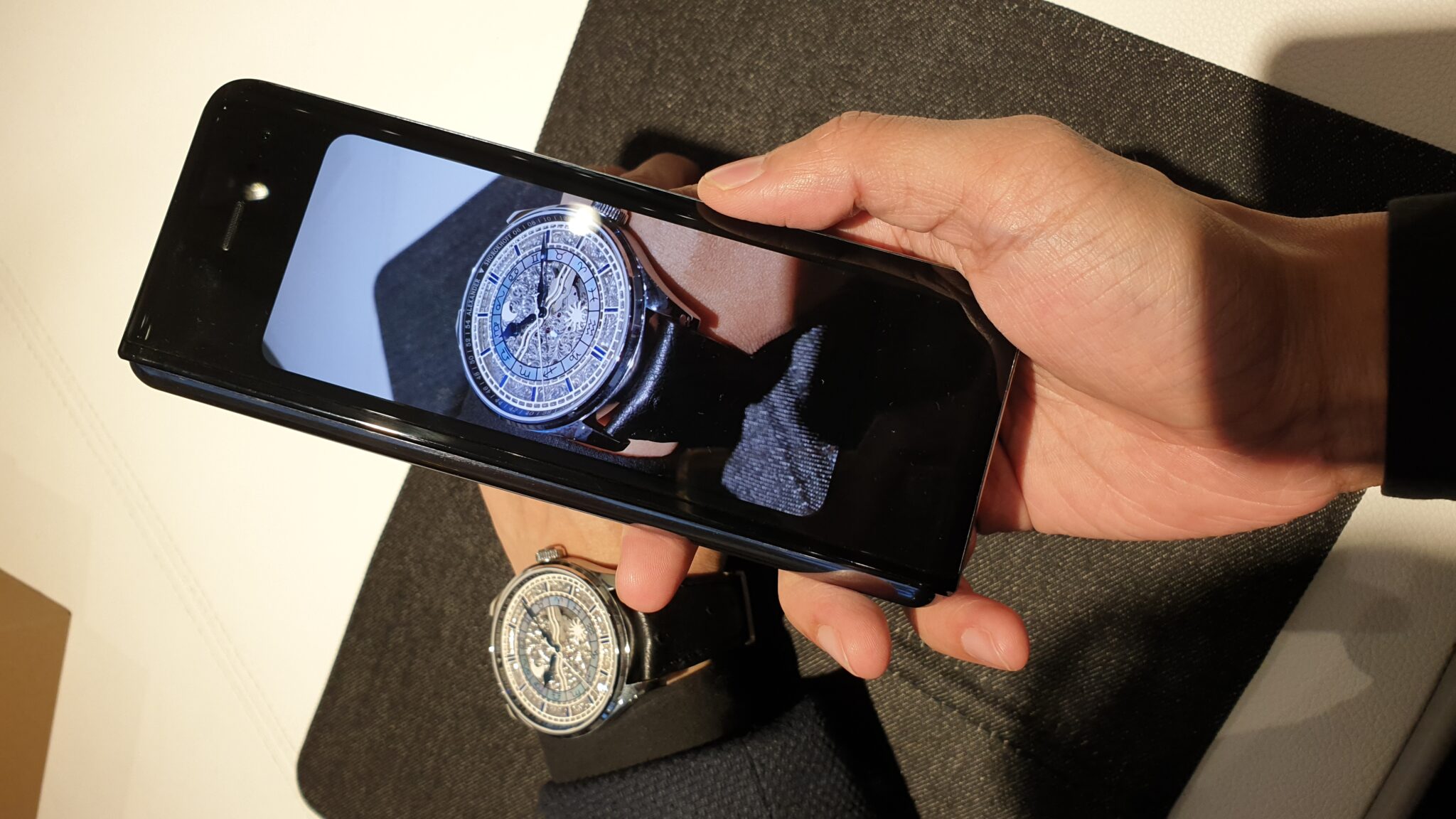 If you eyeball it from the side, it’s roughly the thickness of two Galaxy S10’s stacked up together one over other other though it’s slightly narrower in width. The build quality on offer here is excellent, with a tactility much akin to a luxury watch with cool metal and glass with precision-finished metal buttons and hinges which is appreciated seeing the Galaxy Fold’s hefty price tag.

Hefty weight aside, the Galaxy Fold is very pocketable and is still slim enough to fit, after a fashion, into a pants pocket without too much trouble when its folded down though it’s heavy enough that it’ll cause noticeably uneven sagging in your trousers if you do so and we experienced that it works best in a coat pocket. 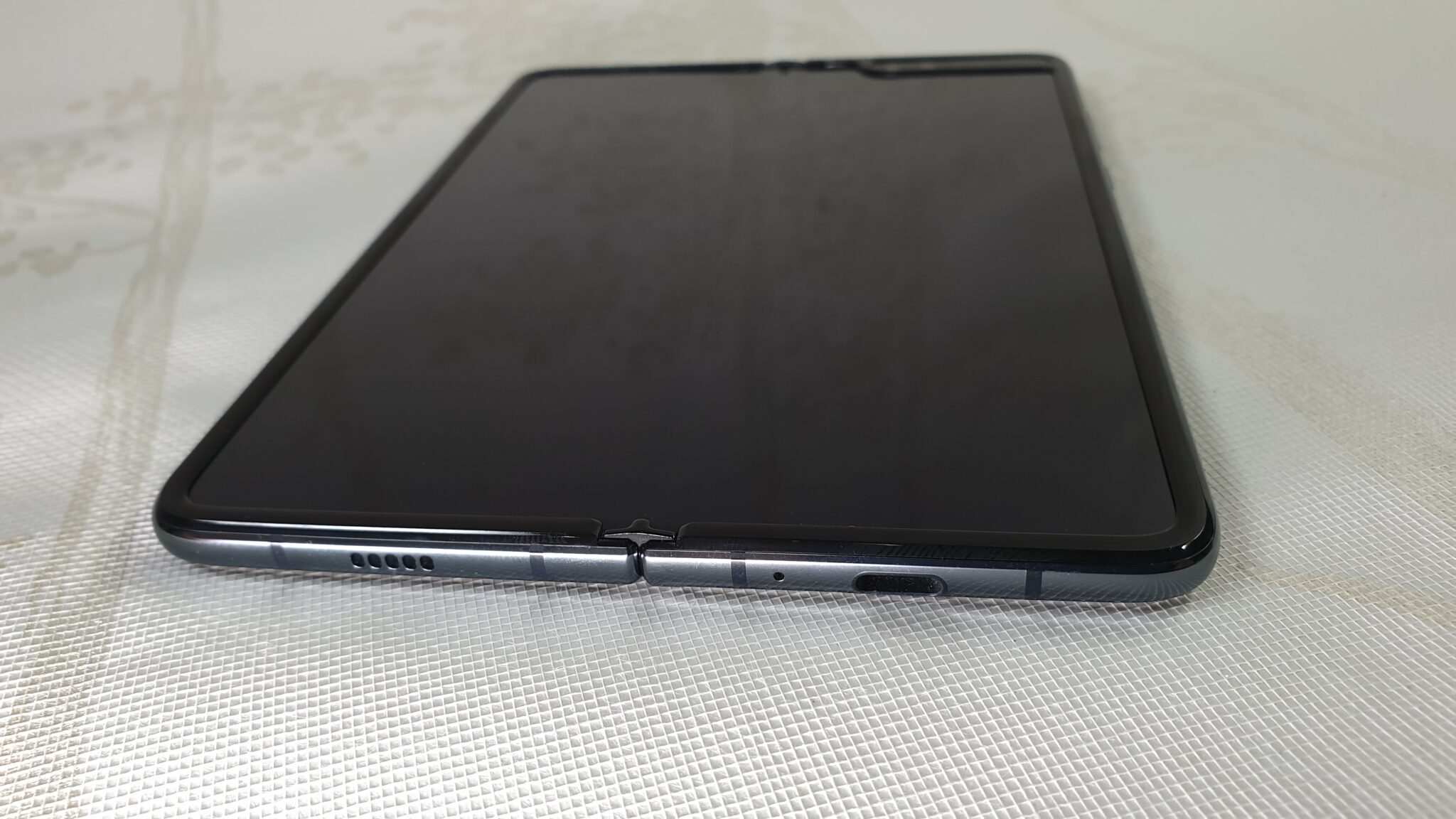 Closer inspection of the Galaxy Fold reveals the feats of engineering that they’ve achieved to make its creation practical and the craftsmanship on offer is impressive indeed. When closed, both ends of the Fold are held together by a series of magnets and it’s only with deliberate pressure that you’re able to open it to its tablet configuration; there’s no worries here of it accidentally flopping open by accident. 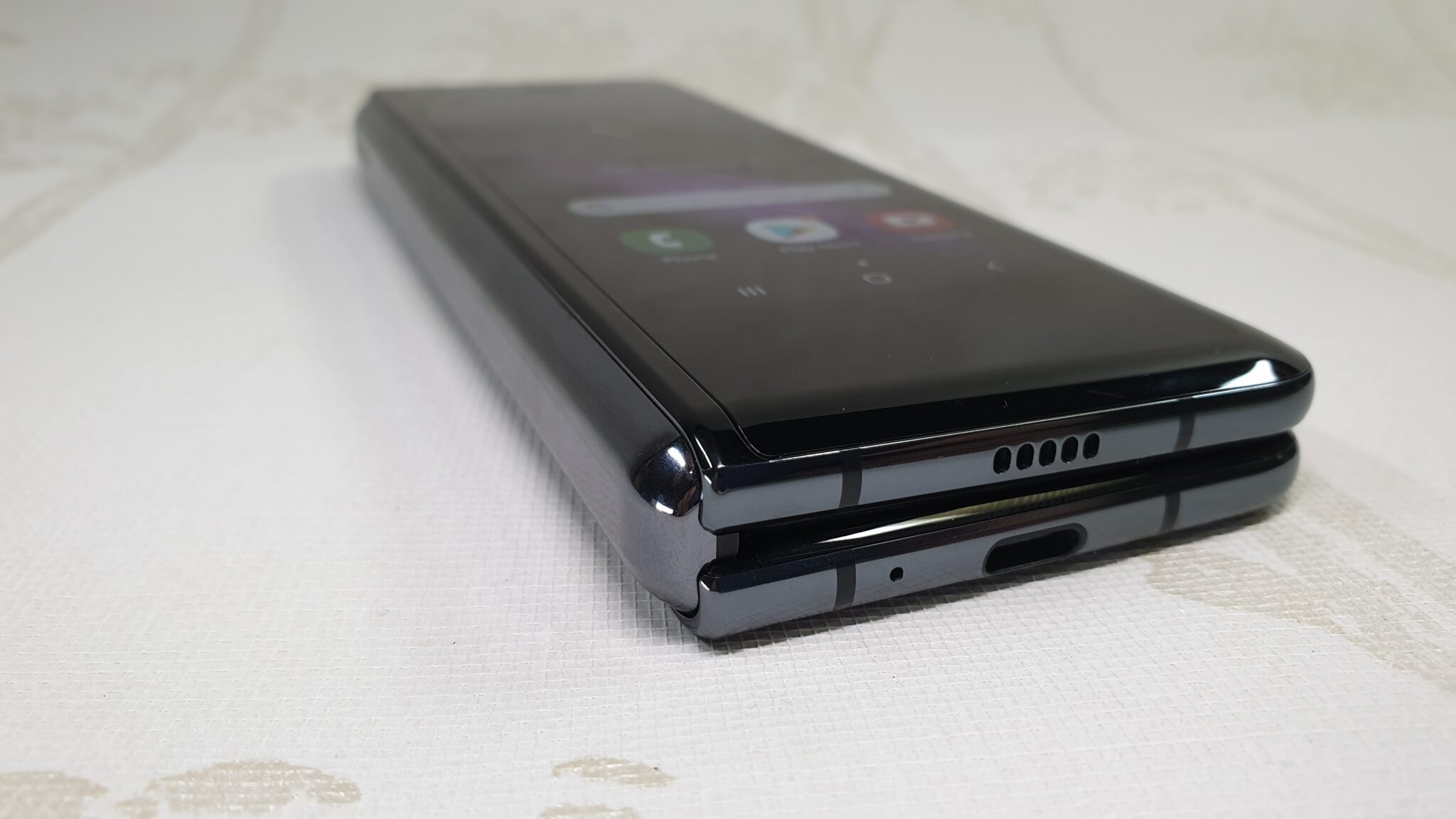 The strengthened hinge mechanism itself feels remarkably sturdy and stays in place until you fold it flat. On paper, it’s rated for over 200,000 actuations and that’s way beyond the lifetime of the Galaxy Fold even if you open and close it repeatedly every day for several years in a row. The only irksome quirk here is that there’s still a tiny gap between both sections when folded but it’s not a deal breaker. That and the fact that the whole affair is not rated for water resistance unlike its Galaxy S series and Note series siblings so it’s best you don’t bring it near the pool, or for the matter, near any body of water. 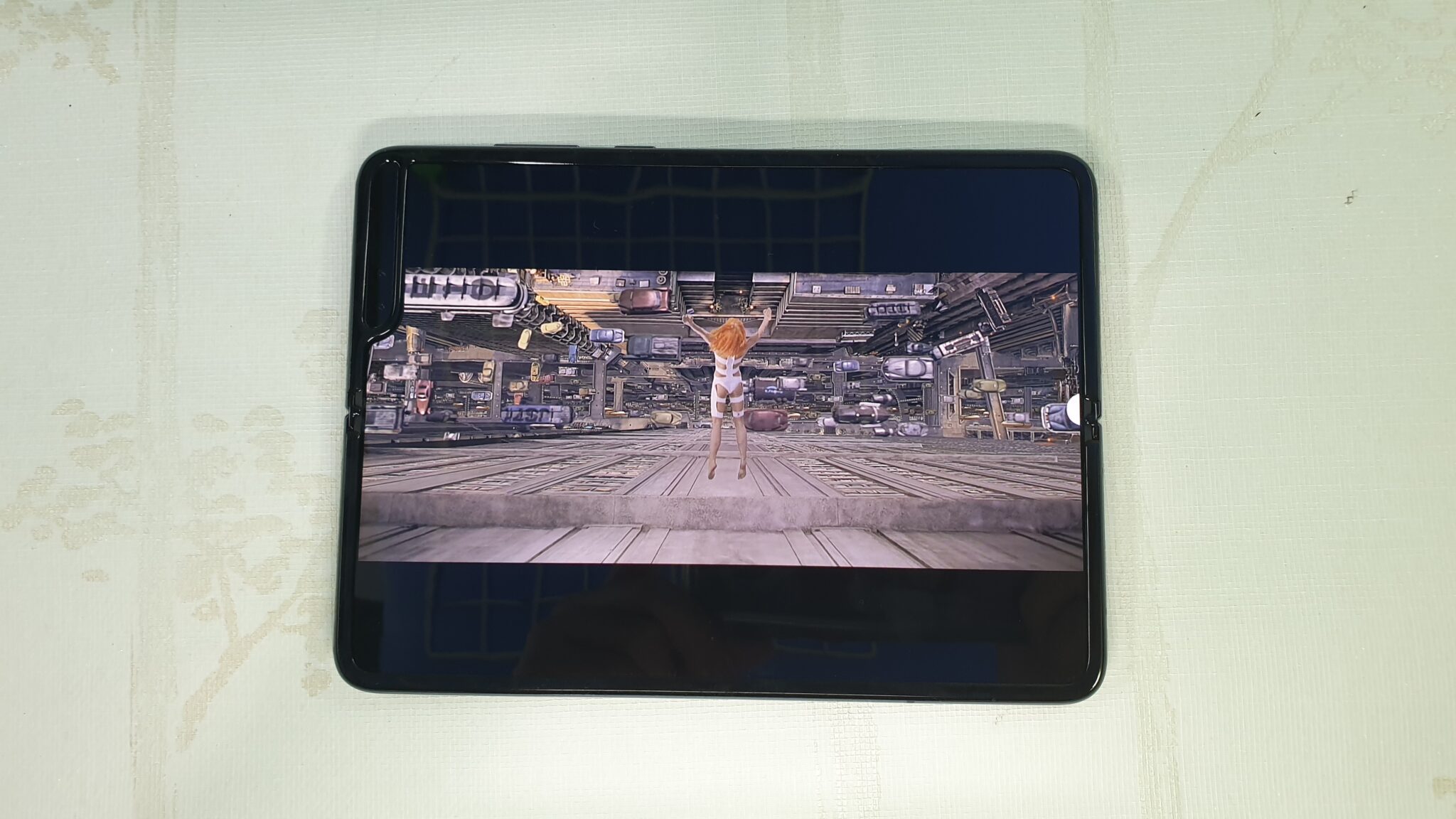 Up front, the Galaxy Fold has a 4.6-inch HD+ Super AMOLED display that’s relatively tall and narrow, harkening back to the dimensions seen on displays mounted in smartphones from the early 2000’s. Paired with it is a top-mounted single sensor 10-MP selfie camera with dual pixel autofocus. There’s five other cameras on the Fold for a grand total of six – one on the ‘cover’, two when it’s opened flat and three on the back that act as the primary camera array.

When folded down, the Galaxy Fold and this smaller front touchscreen, which they’ve dubbed as the ‘cover’ display is sufficiently sized to handle quick messages, web browsing on responsive websites, poring through your Facebook and Instagram feed and the like. 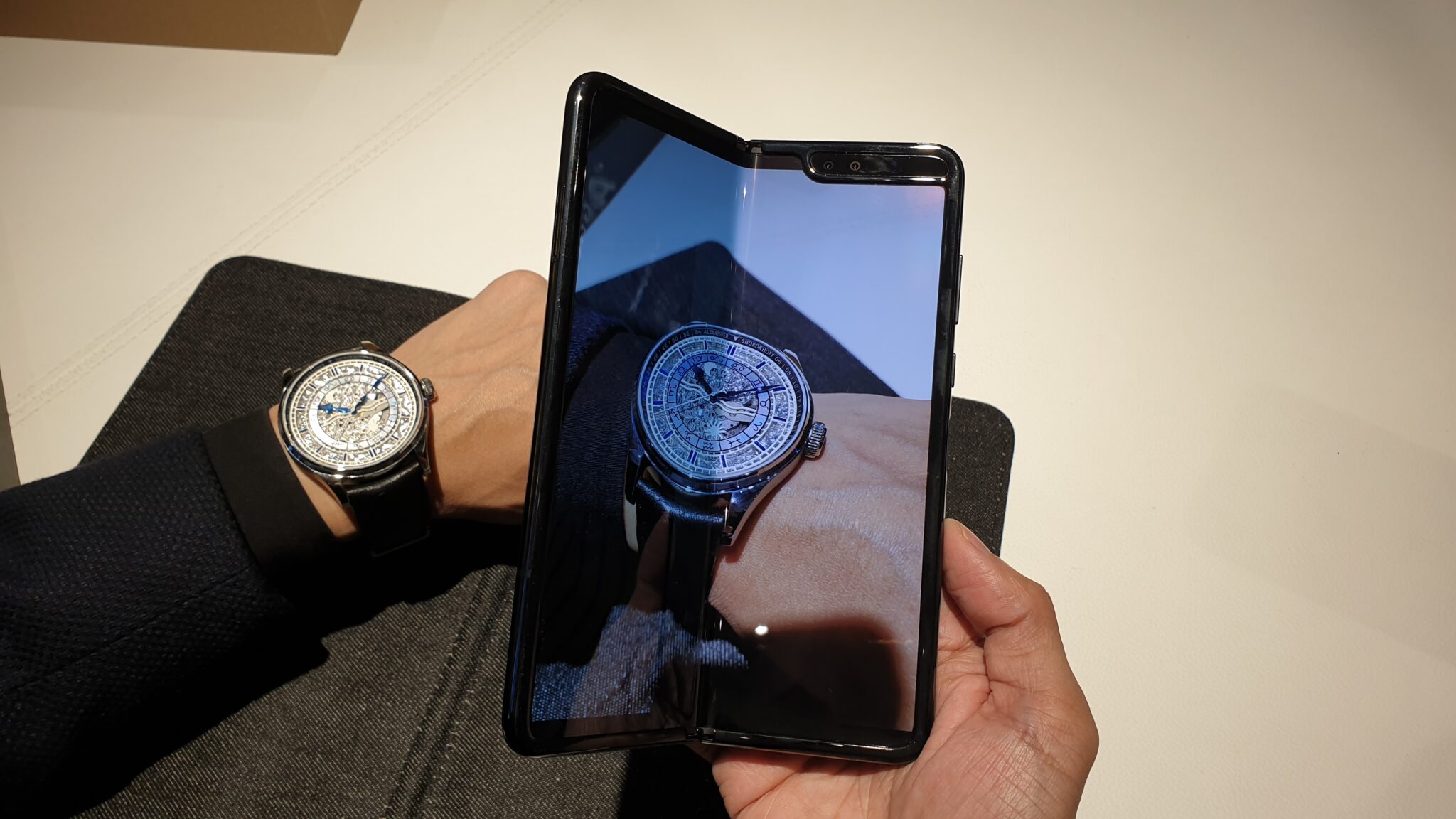 Unfortunately, the cover display is a bit on the small side for serious work like hammering out an email or gaming but it does the job. One particular feature of note is that you can use this cover display with the powerful rear triple camera array which is akin to that on the Galaxy S10 (12-MP primary camera with OIS, 12-MP telephoto camera with 2x zoom and a 16-MP ultra wide angle camera) rather than having to fold the phone out entirely which makes it handy for getting a quick photo or two.

The base of the Fold sports a USB Type-C port for charging and docking duties as well as a speaker grille for the matching set of AKG stereo speakers on the phone. Of particular note with the Galaxy Fold is that it also has DeX mode, allowing you to use it as an ad hoc PC complete with a desktop mode when hooked up via an HDMI cable to a monitor. 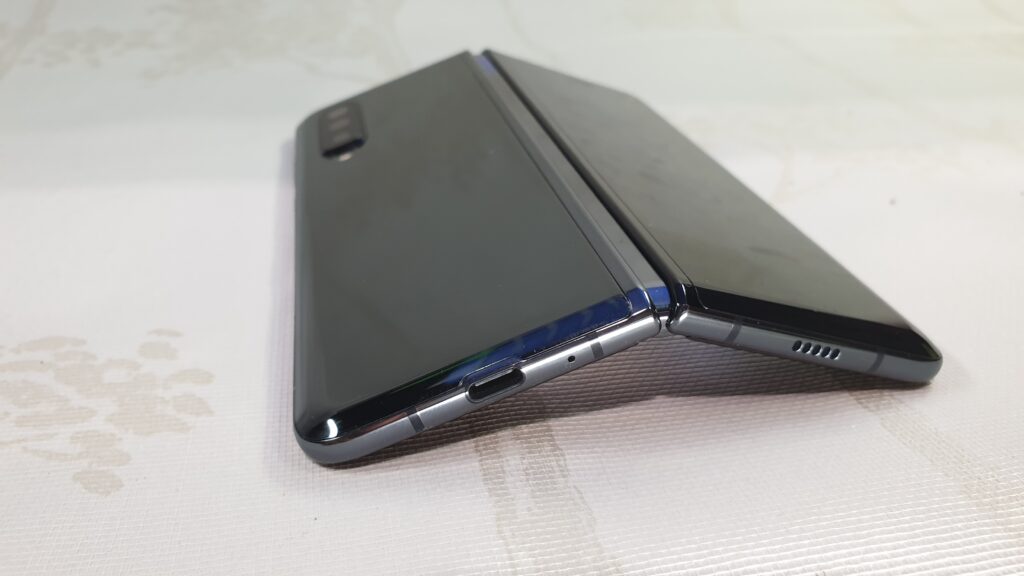 The sides of the phone come with a power button and volume rocker as well as a side-mounted fingerprint reader. It’s a bit of an anomaly seeing as it’s siblings the Galaxy S10 series (save for the S10e) and the Note10 all have under-display fingerprint readers but it’s presumably a compromise on account of its dual screened design.

Flip the mechanism open and you reveal a 7.3-inch QXGA Infinity Flex display that offers a satisfying click when you fully deploy it flat. The display activates as soon as you undo the magnetic clasp and works even when partially folded which makes for quite a trick at parties.

There’s no compromises here and it’s able to serve up luscious HDR10+ and HDR10 content which ought to make movies a treat when viewed on the phone though the quaint 4.2:3 aspect ratio does occasionally result in some games and content getting clipped when viewed on the display. There’s also a minor crease on the display even when folded flat but it does not impact on its image quality in any way. When touched, the Infinity Flex display feels a bit softer than the usual glass-sheathed displays; no surprise seeing as it’s made of a plastic polymer so some care must be taken to ensure it doesn’t get scratched. Nestled in the corner of the display is a dual-camera array for selfies with a primary 10-MP F/2.2 and a secondary 8-MP F/1.9 depth sensor. 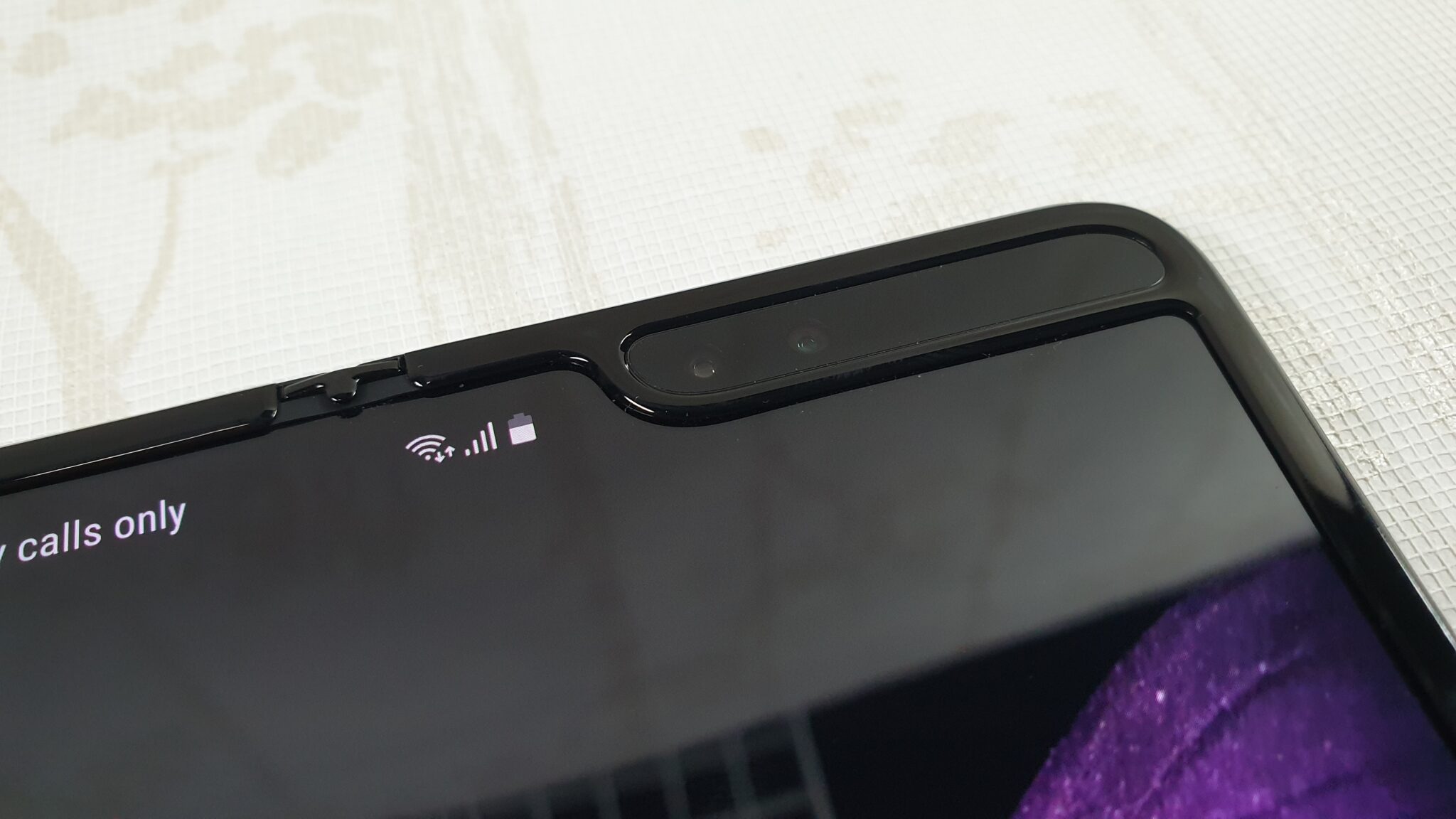 In terms of hardware, the Galaxy Fold only comes in one configuration irrespective of country. You get a Snapdragon 855 processor, 12GB RAM and 512GB of non-expandable storage running Android Pie 9.0 with a slightly modified version of their Samsung One UI user interface to accommodate the unique features of the Galaxy Fold’s design.

Getting it up and running was akin to a Galaxy S10 or Note series phone with a similar start-up sequence. Transferring content from an older phone was a doddle and it was up and running in minutes with all our old apps and games seamlessly transferred over from a Galaxy Note9. 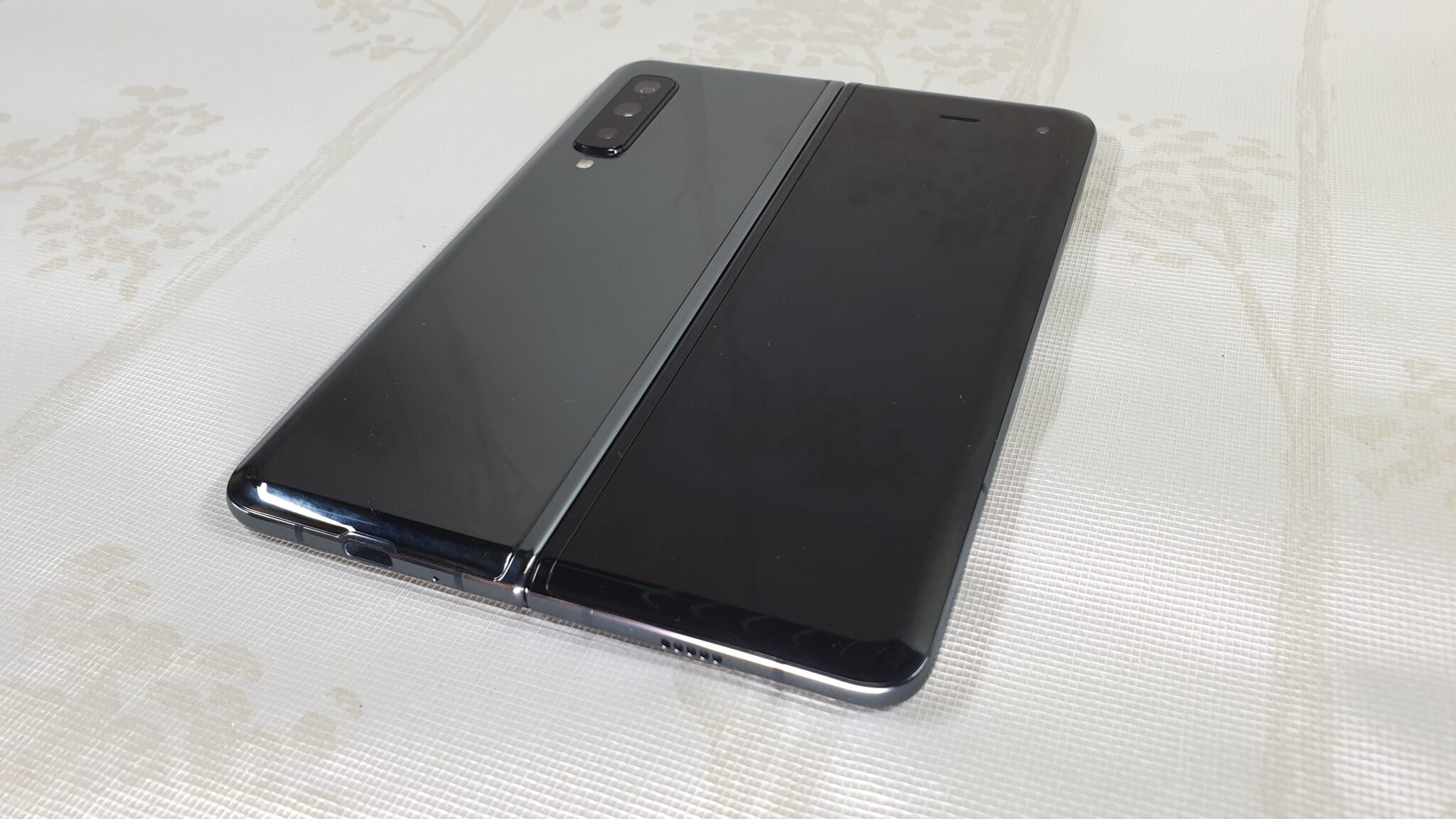 After a quick whirl around the block, the ability to change the size of the display at will is growing on us with the small cover display being used for most notifications and quick calls and the larger display to enjoy content and gaming. After a few days, we’re even getting used to the weight and initial run-throughs even with heavy workloads still offer full-day battery life. Stay tuned for the full review when we put it through its paces! In the meantime, you can check it out at Samsung Experience stores nationwide or saunter on to their official website here for a closer look.