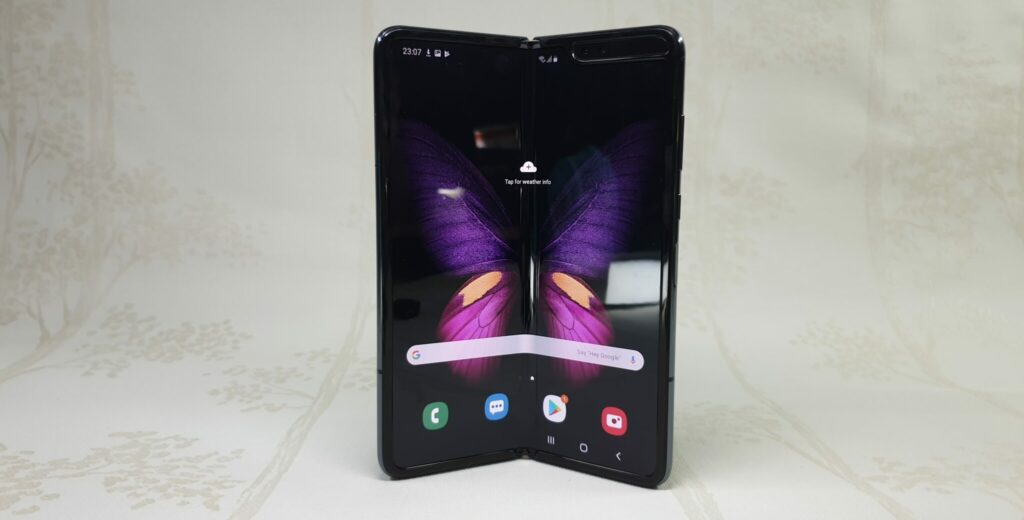 Previously we covered the unboxing experience and a once-over of its build quality and design. This time around, we put the Galaxy Fold through its paces and see how it fares under practical field conditions. To recap, the Galaxy Fold is the first of a new generation of phones that have a foldable inner display. 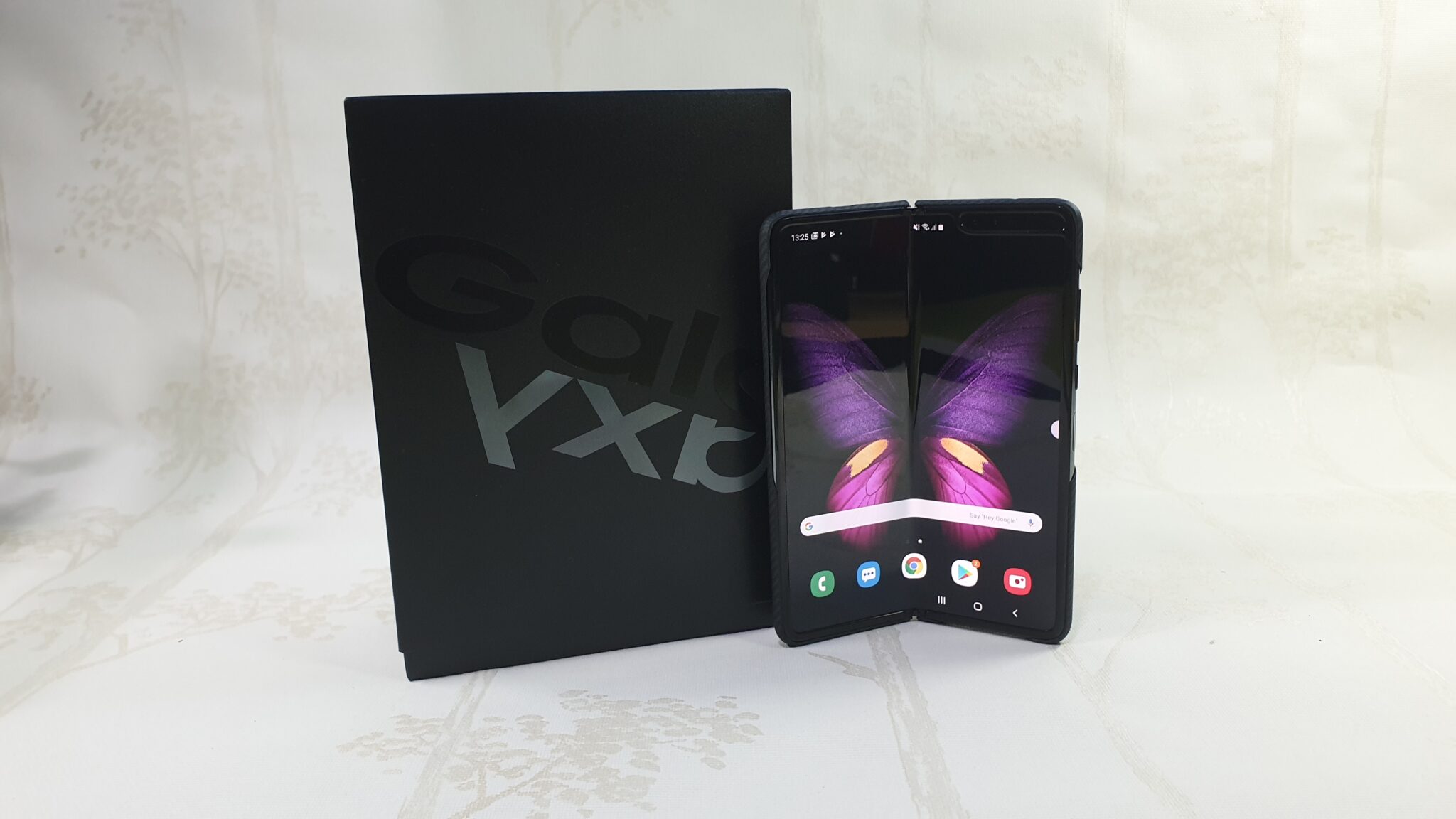 Externally, it has a smaller 4.6-inch HD+ resolution rectangular display when folded down. If you flip the Fold open, you reveal a 7.6-inch WQHD+ polymer Super AMOLED display with a 4.2:3 aspect ratio.

There’s a noticeable notch cut in the upper left corner for the dual front facing cameras but that aside, the inner display offers a significant amount of screen real estate. On paper, you’re getting 1.4x larger web browsing and a 1.3x larger view in landscape mode when watching videos compared to a Galaxy Note10+. 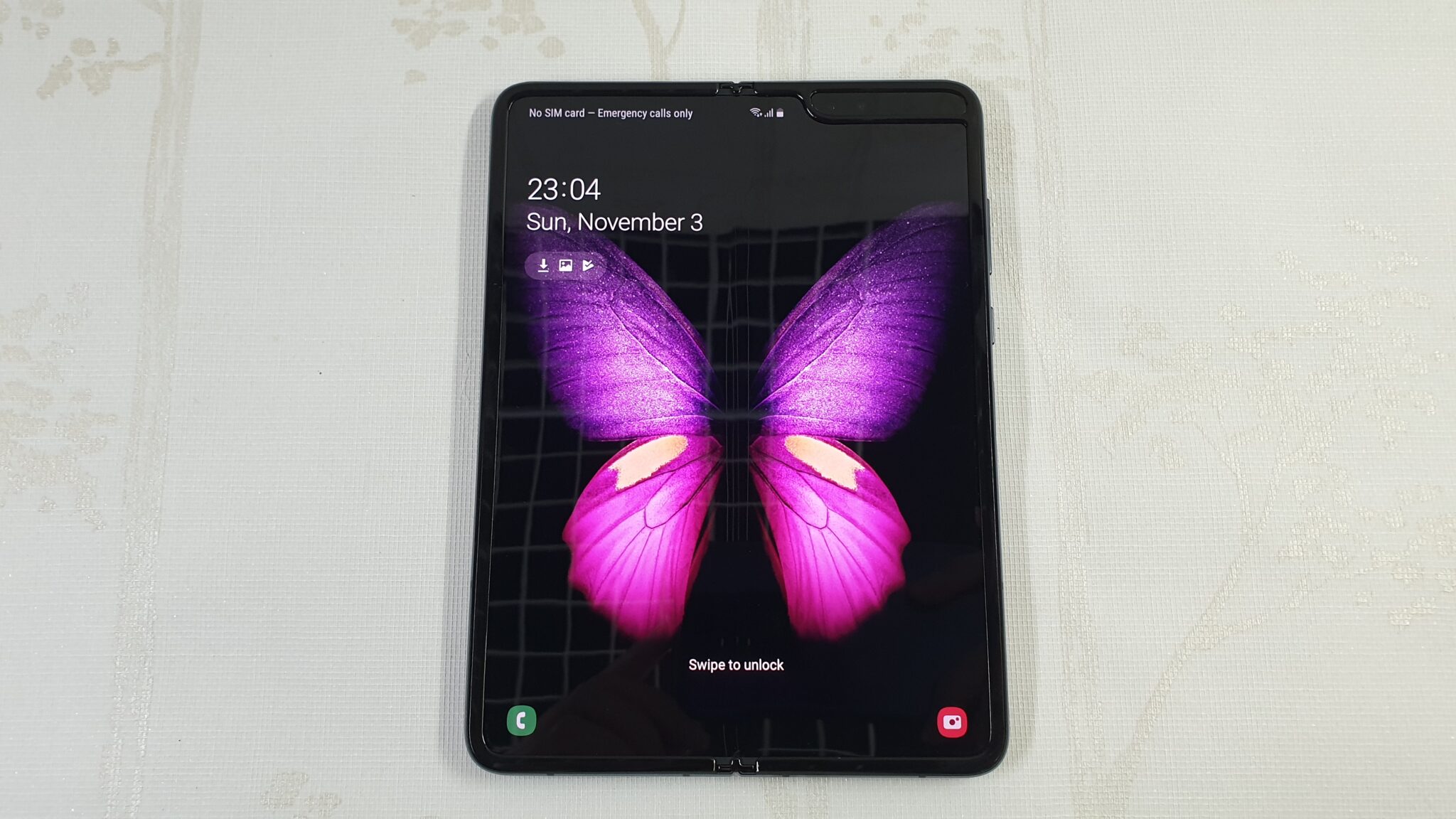 On paper, this combination of a smaller and larger screen effectively allows you the power and functionality of both a smartphone and a tablet in one chassis. By and large, the Galaxy Fold achieves this albeit with some compromises. 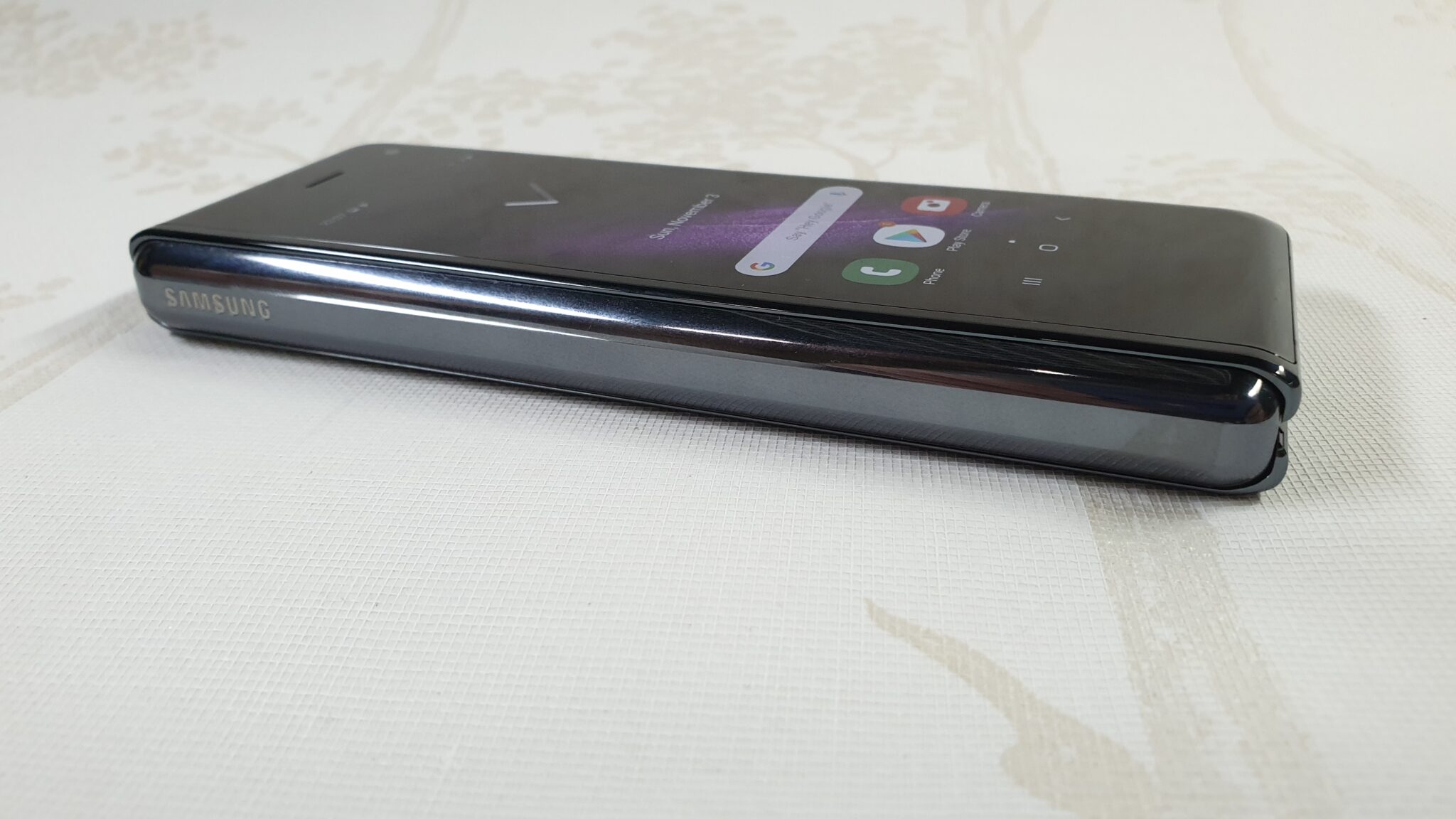 In terms of functionality, the Galaxy Fold works much in the same fashion as other phones with One UI like the Galaxy S series and Note series phones. For the most part, you’ll be unfolding and flipping it open and shut through the course of the day depending on what you need to do.

While there are emphatic labels and warnings regarding proper usage of the inner Infinity Flex display, especially in regards the avoidance of poking it with a sharp fingernail or other pointy item, the panel itself was otherwise sufficiently durable for daily use. While it’s a wasted opportunity not to add in an S Pen stylus to the Galaxy Fold, the Infinity Flex display proved swift and responsive to the touch.

In my user experience, I relied on the smaller cover screen to view notifications and skim through our Whatsapp and Telegram conversations though it’s a bit too small to actually type out a practical reply especially with my large hands. 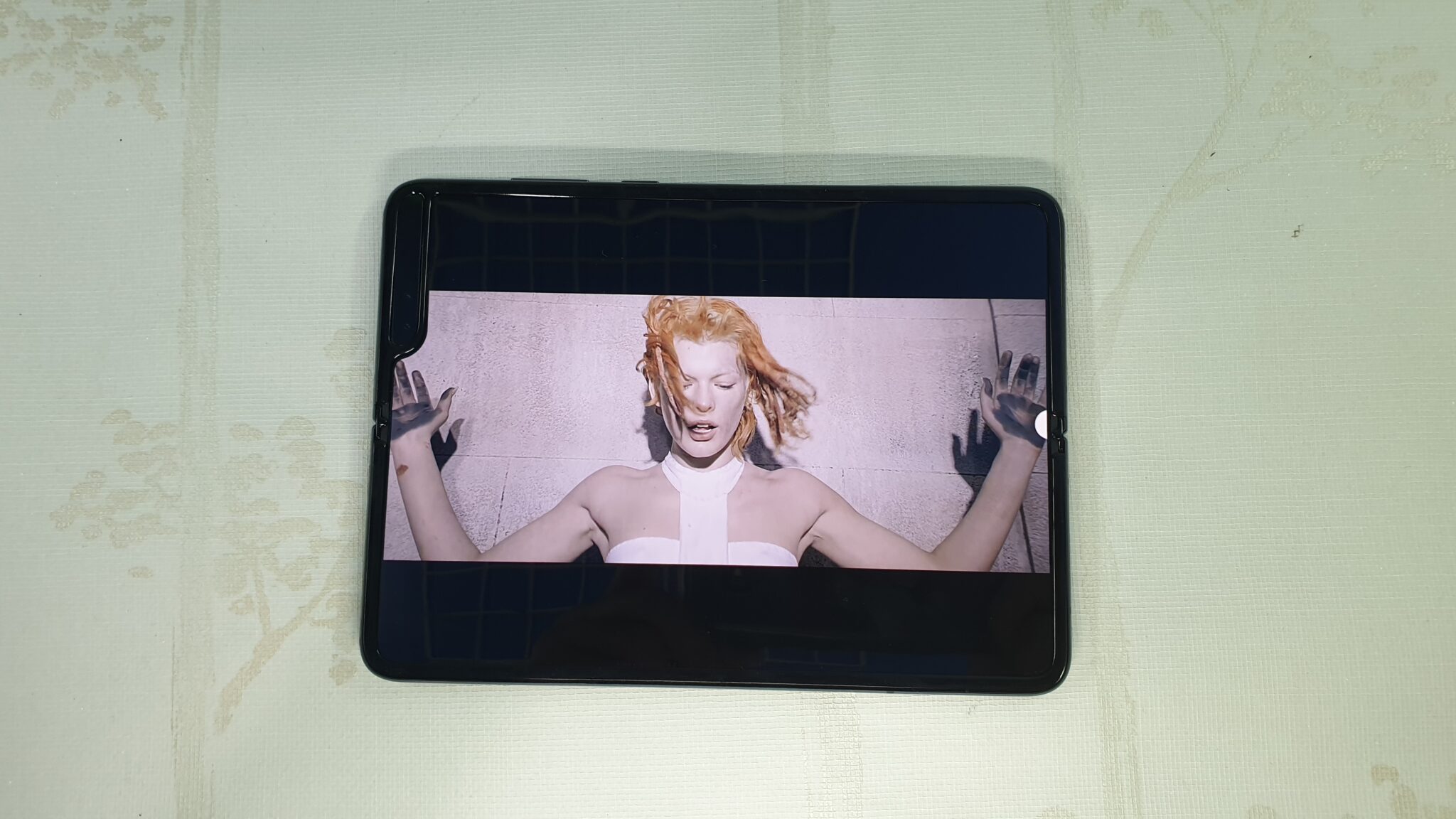 Fortunately the smaller AMOLED display has sufficient clarity under daylight and is vibrant enough to view the odd shot or two from your photo gallery or even a quick YouTube clip in a pinch. It’s really way too small for serious work though this works to your advantage when taking pictures with the rear camera as it’s much easier to maneuver around rather than deploying the larger main display.

It soon became second nature to simply flip open and use the primary Infinity Flex display when consuming content like YouTube and Netflix movies, editing a video clip, gaming and when editing text or typing out a lengthy reply. The large display is also incidentally ideal if you’re playing classic RPGs like Baldur’s Gate and Planescape: Torment as you’re able to see the text and the map without having to squint. 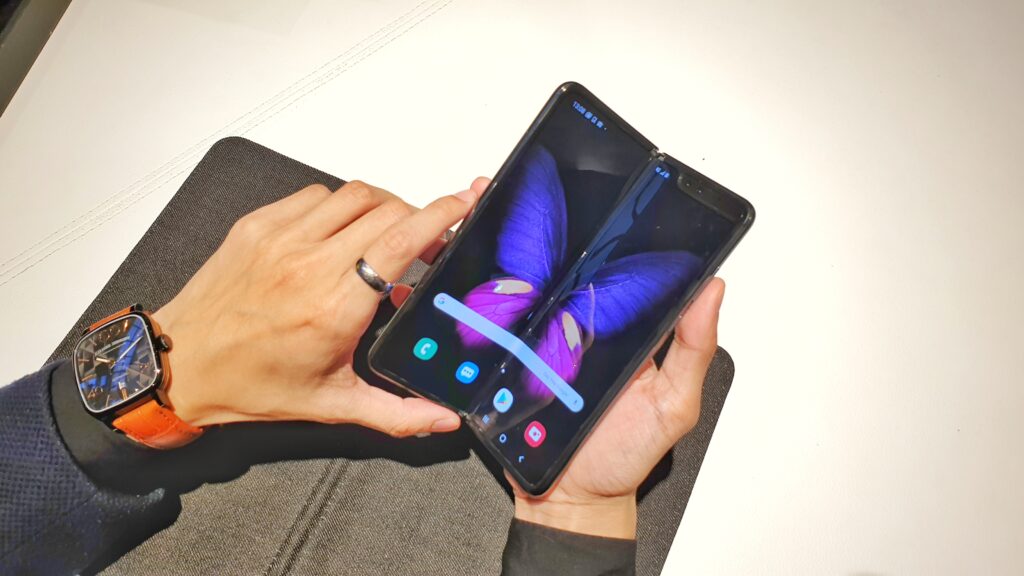 The larger Infinity Flex display is breathtaking to behold and even though it’s a first generation example of its kind, it shows a remarkable level of polish. Colour rendition is excellent overall along with good detail though the crease is still noticeable if you’re viewing content with a white background. Movies were a treat but there’s letterboxing on account of the aspect ratio of the Infinity Flex display and the fact that most movies have a 16:9 aspect ratio. 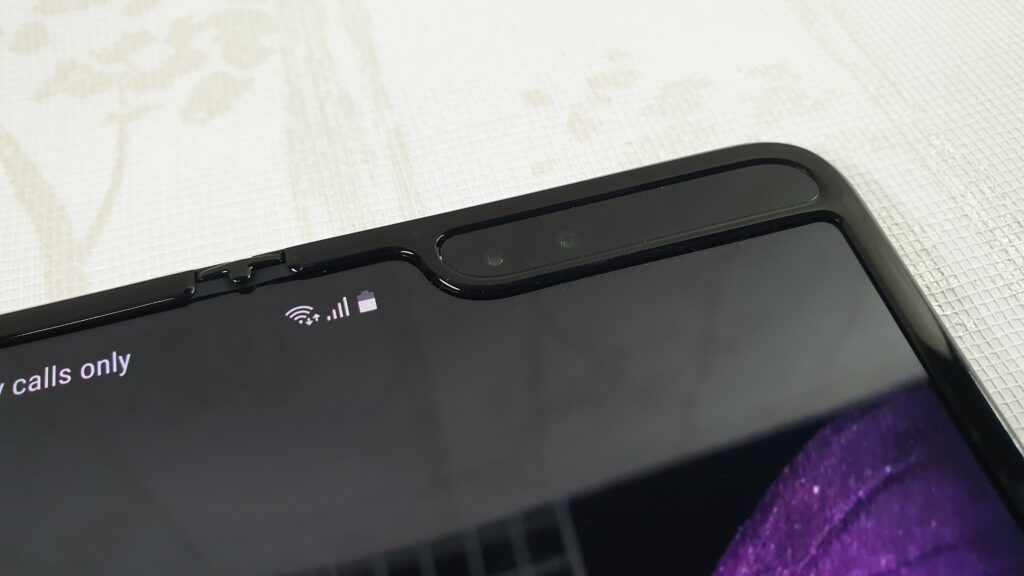 Another minor quibble is that the dual selfie cameras take up a chunk of space in the upper right corner forcing you to swipe down to access shortcuts on the left side of the display. It’s an annoyance but not a deal breaker. 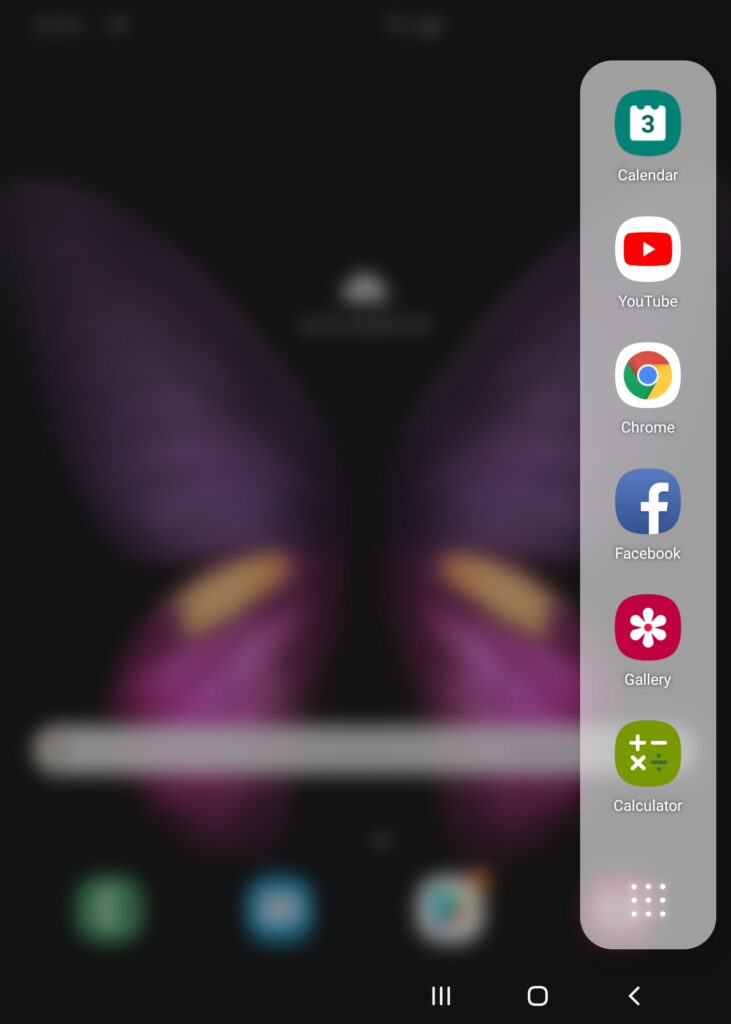 Rather than the usual keyboard, the Fold instead has a split virtual keyboard that requires two handed use. The larger spacing between the keys helped to reduce the usual typos caused by having large digits while the increased work space allowed me to get a bird’s eye view of a document to see how it flows. 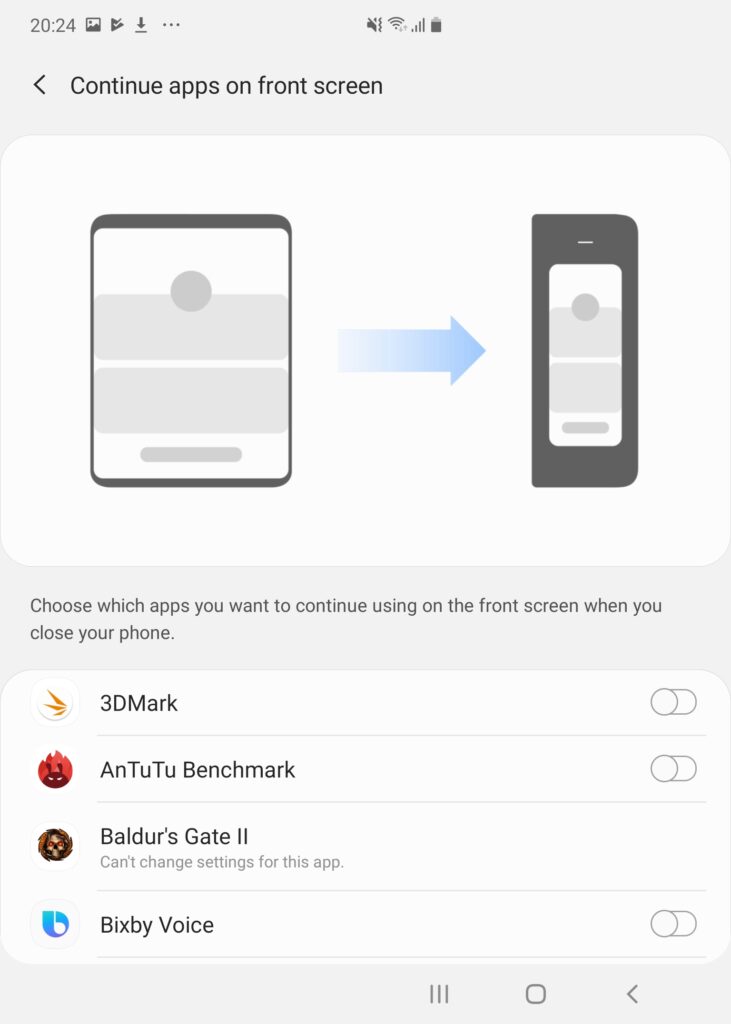 The new features added to One UI revolve around its two displays. If you open an app on the smaller cover display, you can have it continue working on the larger tablet display when you flip the Fold open. This feature, dubbed App Continuity by Samsung, mostly works with the major productivity apps and Samsung’s own stock apps so it’ll seamlessly transfer over things like Whatsapp, Google Docs, YouTube and the like. 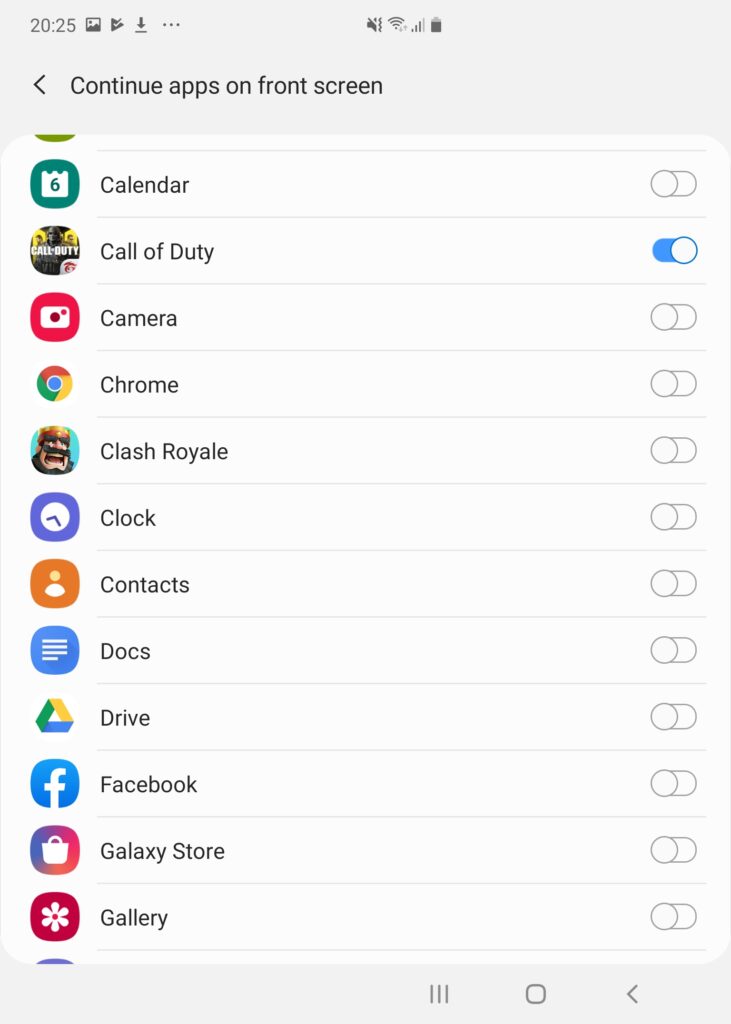 Other apps are a bit of a hit and miss and some don’t fully work with the 4.2:3 aspect ratio and get clipped or simply restart. It’s promising at this point in time though more app compatibility is needed for it to be more practical. 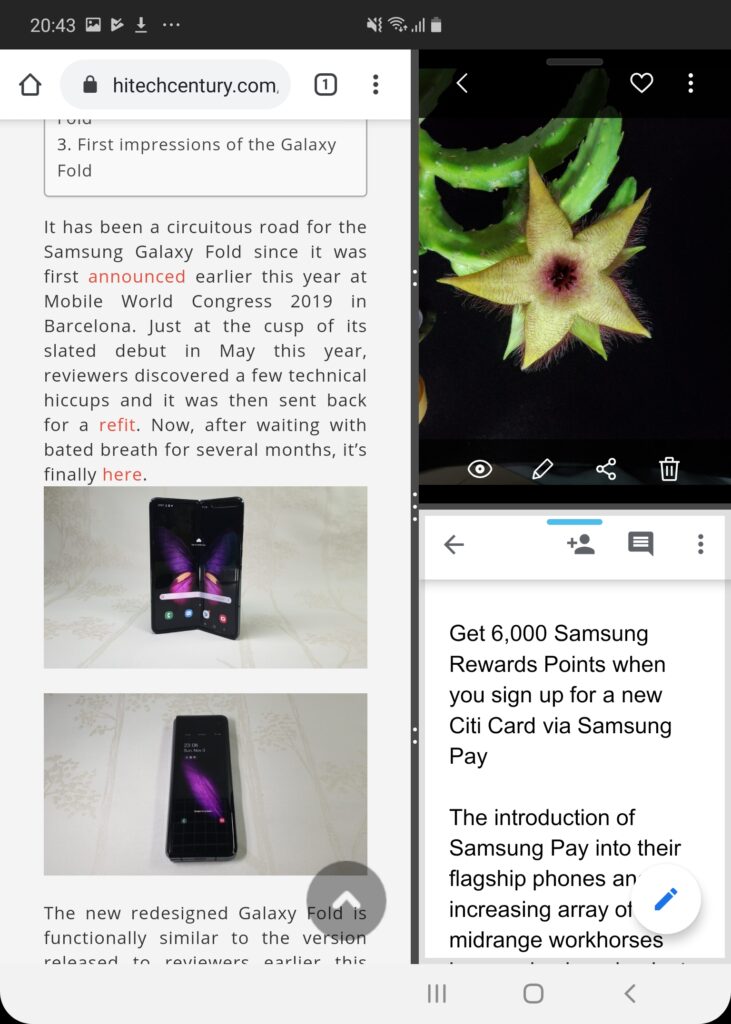 You can have up to three apps appear on the Galaxy Fold’s main display at the same time.

Another feature that makes the Galaxy Fold an impressive productivity device is the ability to display up to three apps simultaneously onscreen that Samsung has dubbed as their  ‘Multi-Active Window’ mode.

Not all apps work nor can you have more than one instance of each but those that do are primarily the mainstream ones like Google Docs, Facebook, YouTube and the like so you’re able to fulfill your aspirations of nattering away with your friend while watching a show. Unfortunately, the phone lacks App Pair so you can’t launch a predefined pair of apps though it would have been fantastic if the Galaxy Fold had an App Trio that launched ‘three’ apps at once onscreen. Perhaps the next version of it will.

In terms of specifications the Galaxy Fold has a Snapdragon 855 processor, 12GB RAM and 512GB of non-expandable storage which gives it quite a bit of pixel crunching punch. Under the hood, it runs Android Pie 9.0 overlaid with their One UI user interface that powers their Galaxy S series and Note series phones though it has a few unique tweaks to account for its dual screen design. 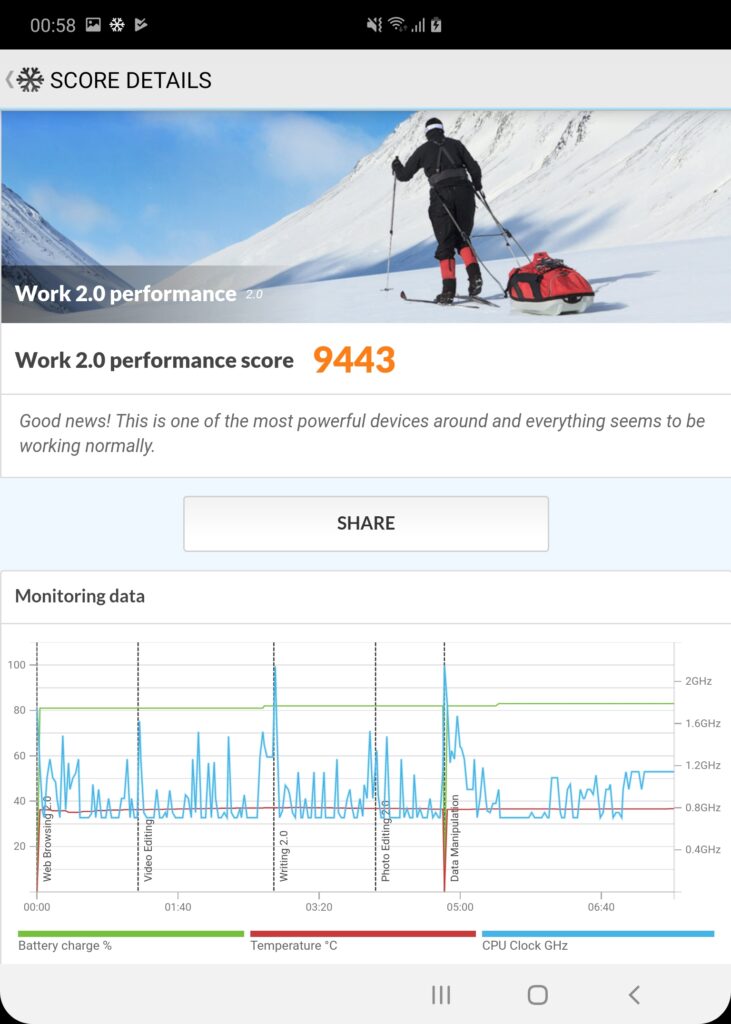 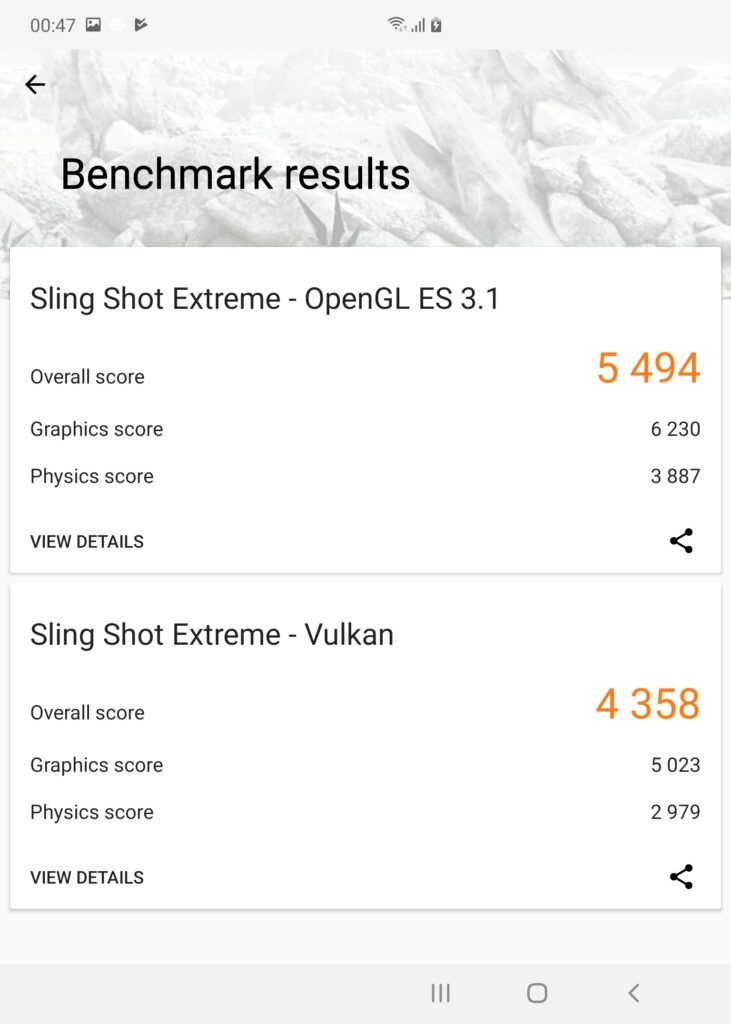 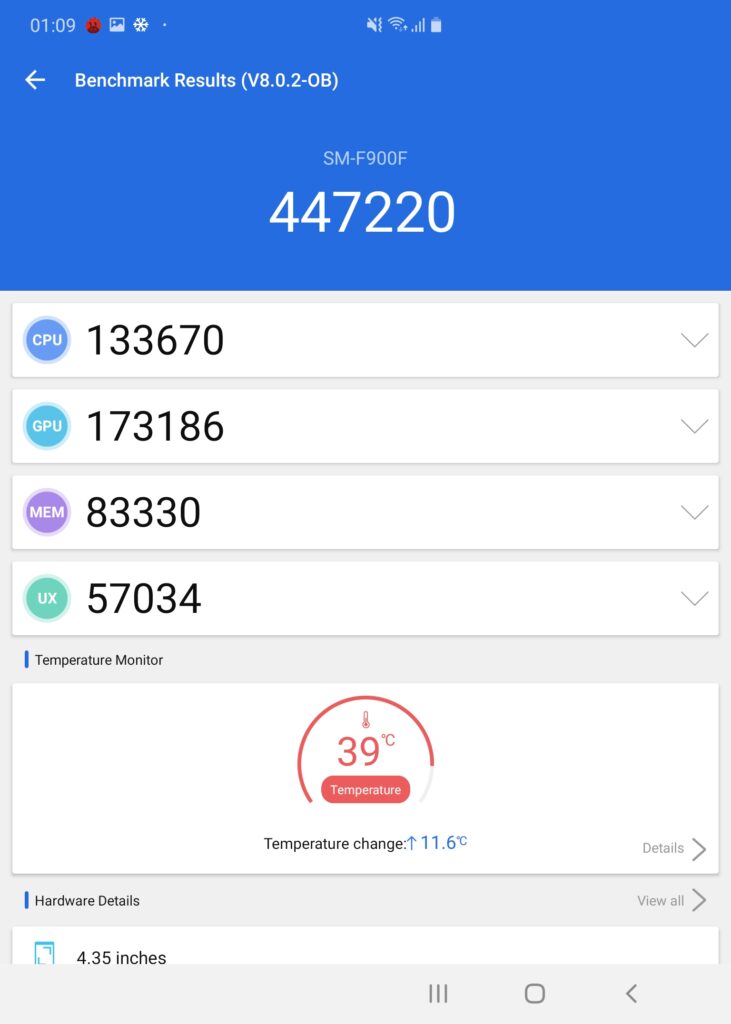 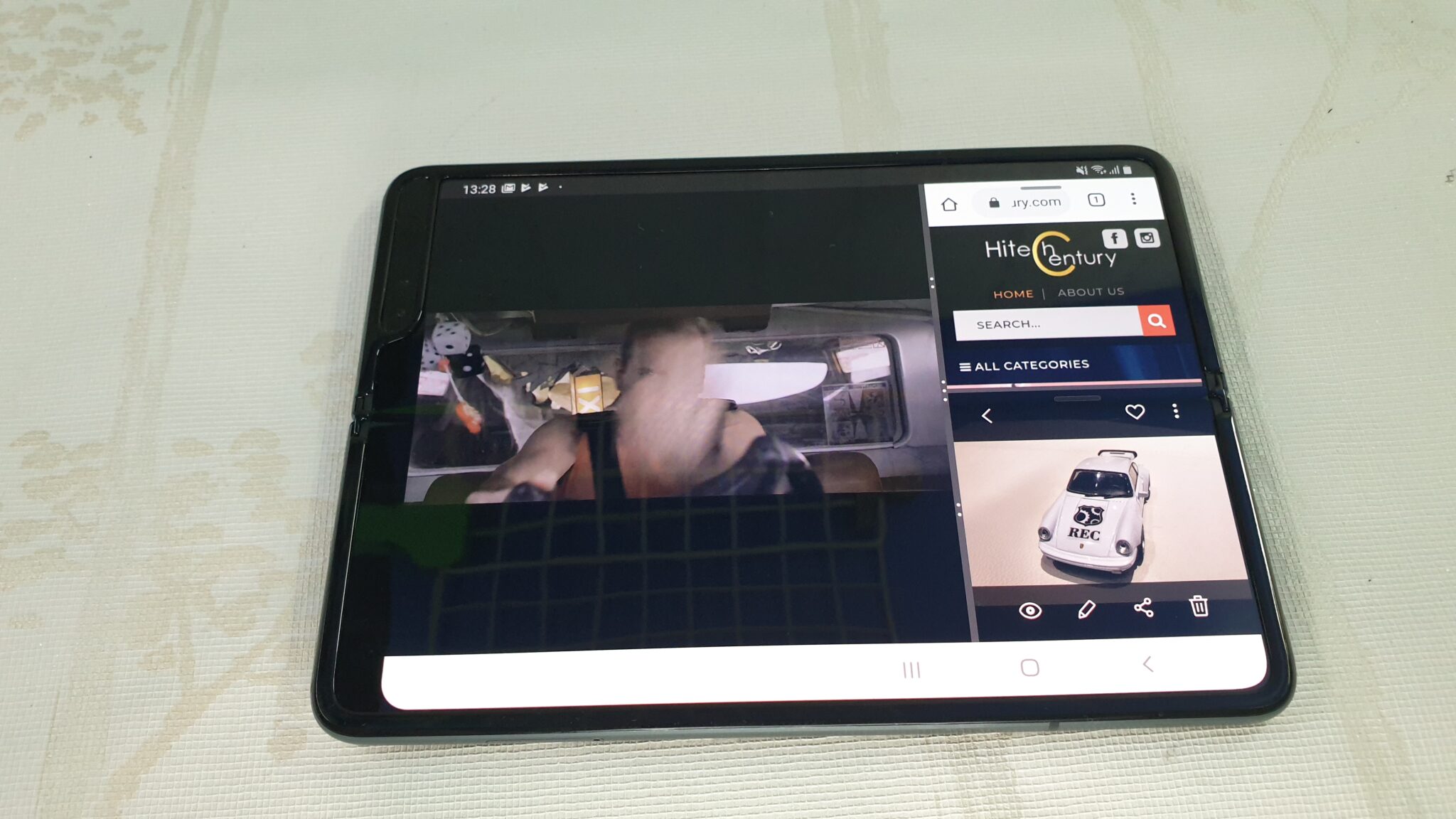 Multitaskers can now watch a movie, browse the web and write at the same time on the Galaxy Fold

Under practical field conditions over the course of a week, the Galaxy Fold did not disappoint with performance matching the Galaxy Note10+ and S10+. Apps loaded up in a swift fashion and it was able to tackle over two dozen open browser tabs without keeling over. Games like PUBG, Asphalt 9, and Call of Duty Mobile were handled at maximum settings in a smooth fashion on both the cover and the main display though the experience works best on the main Infinity Flex display.

From an engineering and performance standpoint, the Galaxy Fold is a breathtaking example of next-generation engineering with performance that is right there with the best phones in the industry. Alas, the user interface hasn’t quite caught up and while its implementation of dual screen functionality is mostly sound, it still needs some polish around the edges. 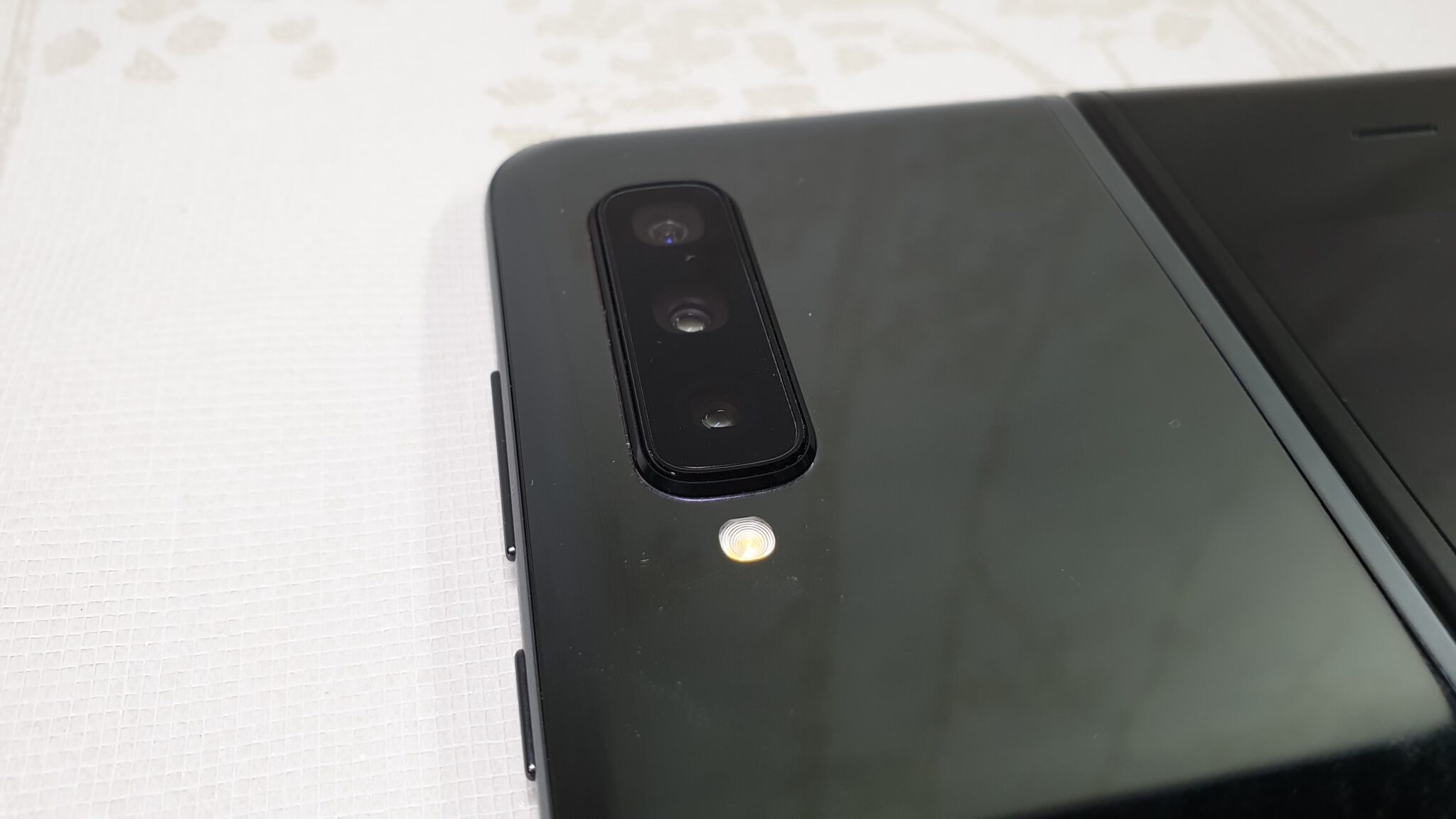 The Galaxy Fold’s unique design also means that it needs a rather unusual camera setup. To wit, it has a whopping six cameras spaced all around its chassis with a single front-facing 10-MP selfie camera, a pair of dual selfie cameras (10-MP + 8-MP) perched on top of the Infinity Flex display in a corner and a triple rear camera array (12-MP F/1.5-F/2.4 + 12-MP telephoto lens and 16-MP ultrawide lens). Both the dual selfie camera and the rear triple camera array are both culled from the Galaxy S10+ and lack the recent upgrades seen in the Galaxy Note10 series phones like Live Focus video  and a better F/2.2 zoom lens. 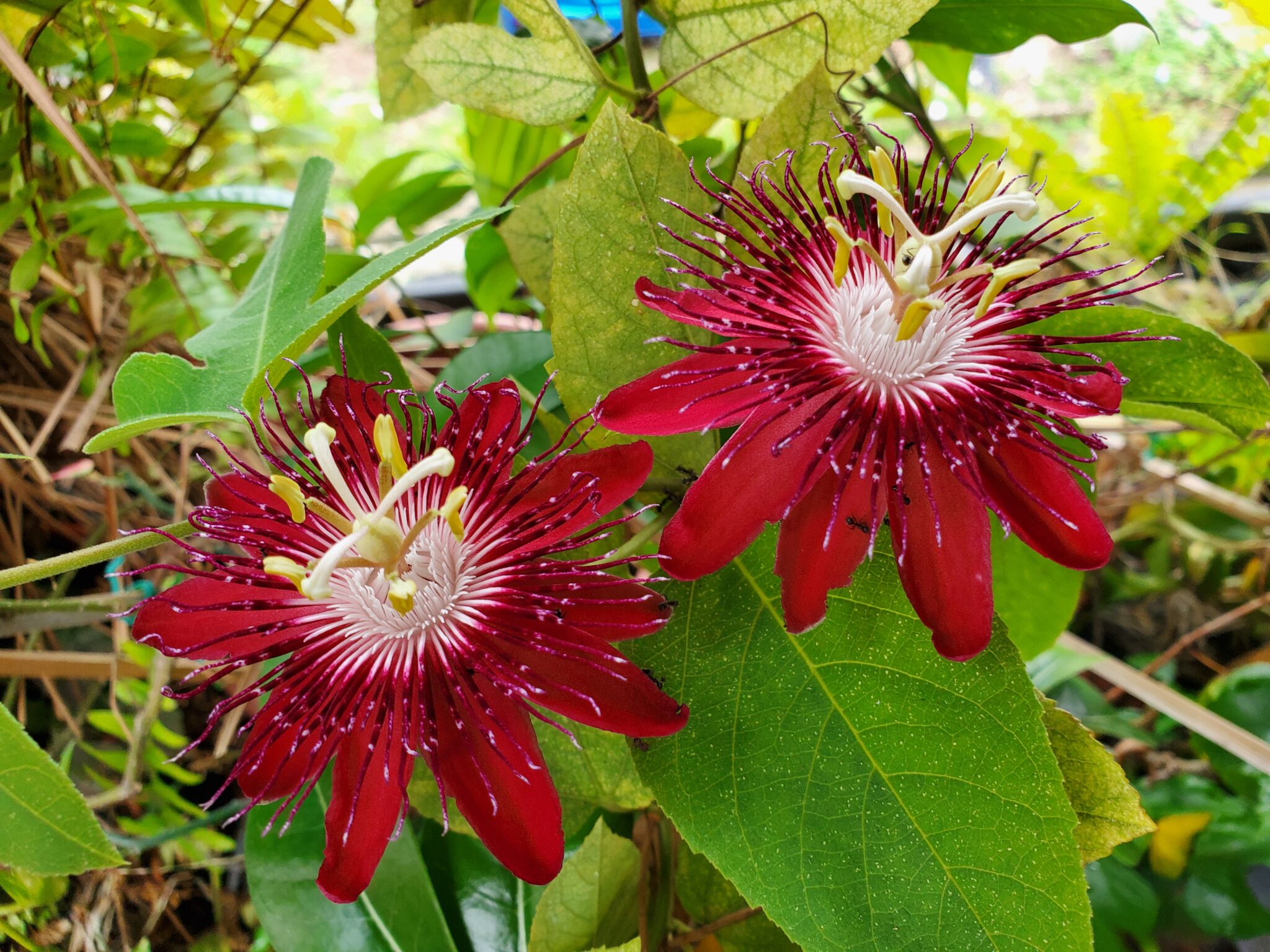 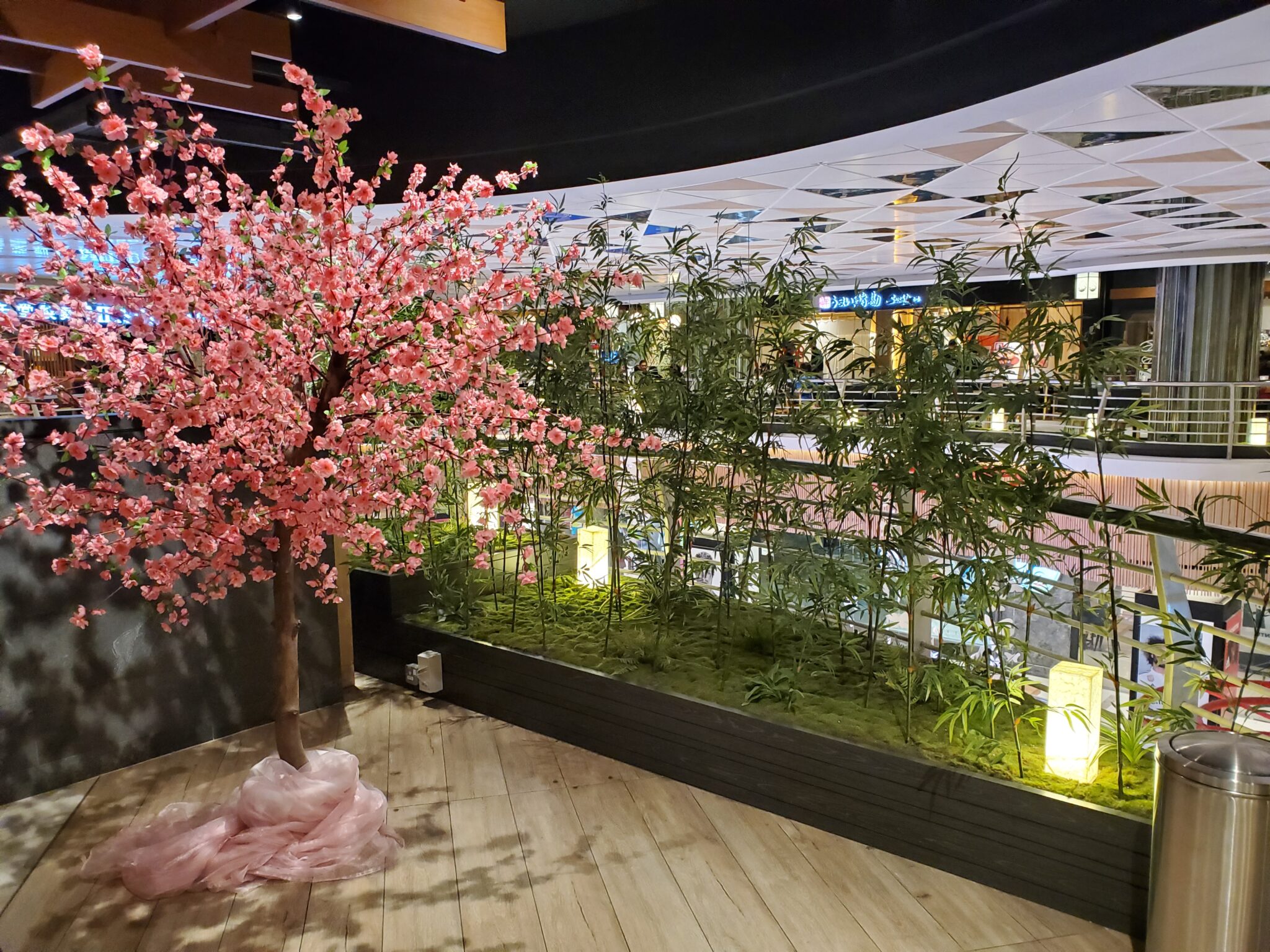 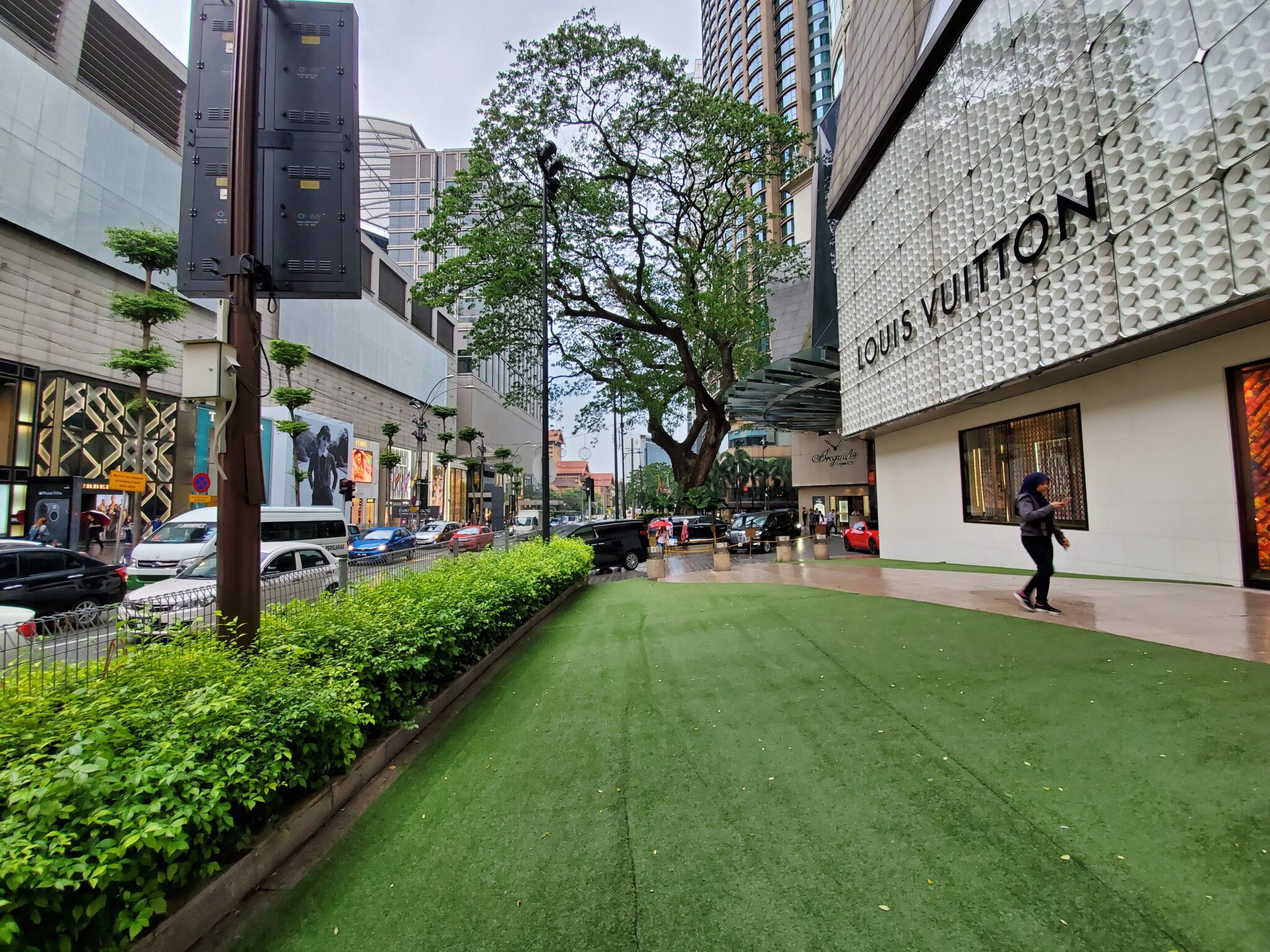 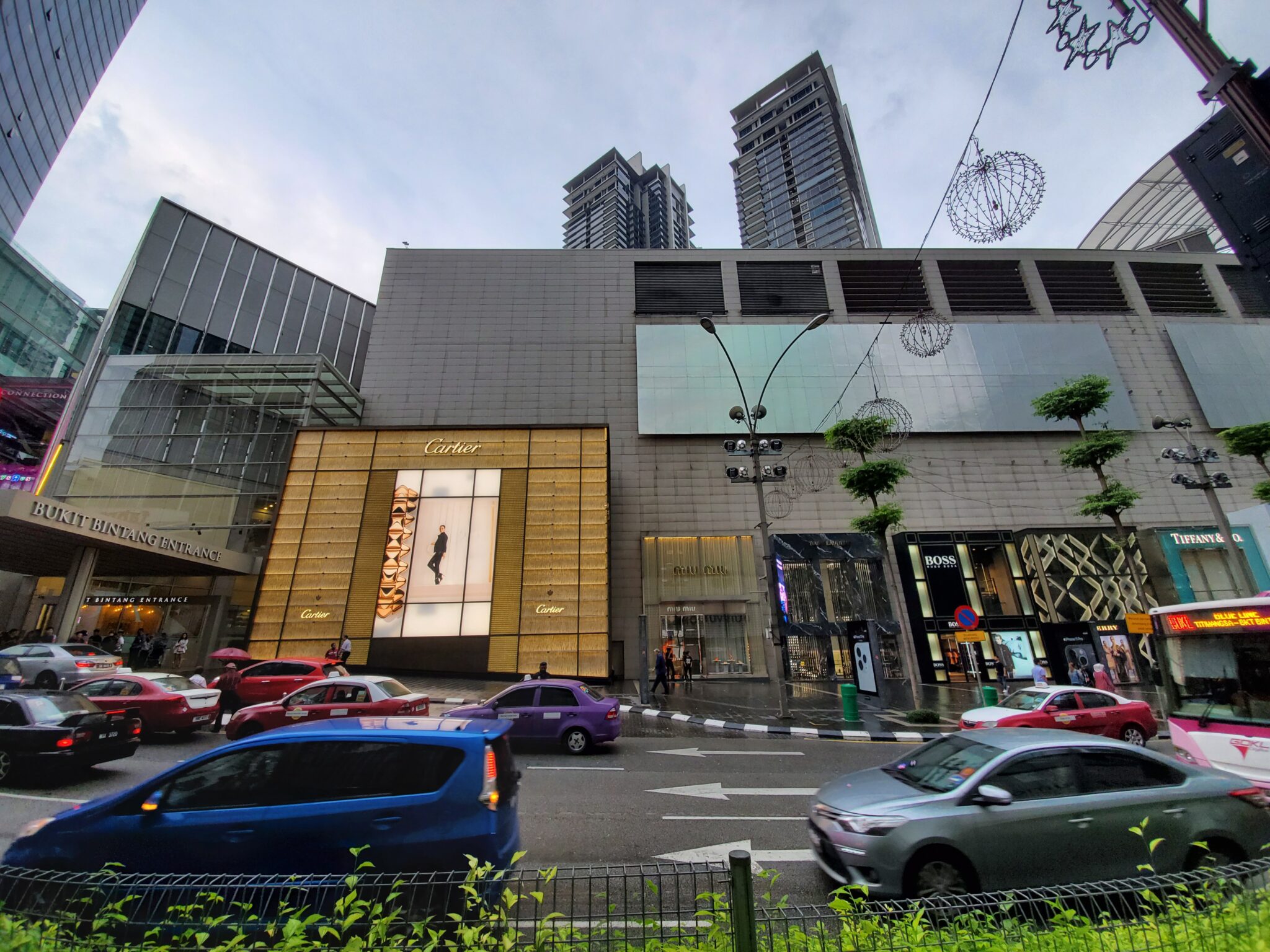 Performance on the whole is excellent across the board, no surprise seeing the provenance of its cameras as the S10+ has a solid track record since its debut for delivering great shots and video. 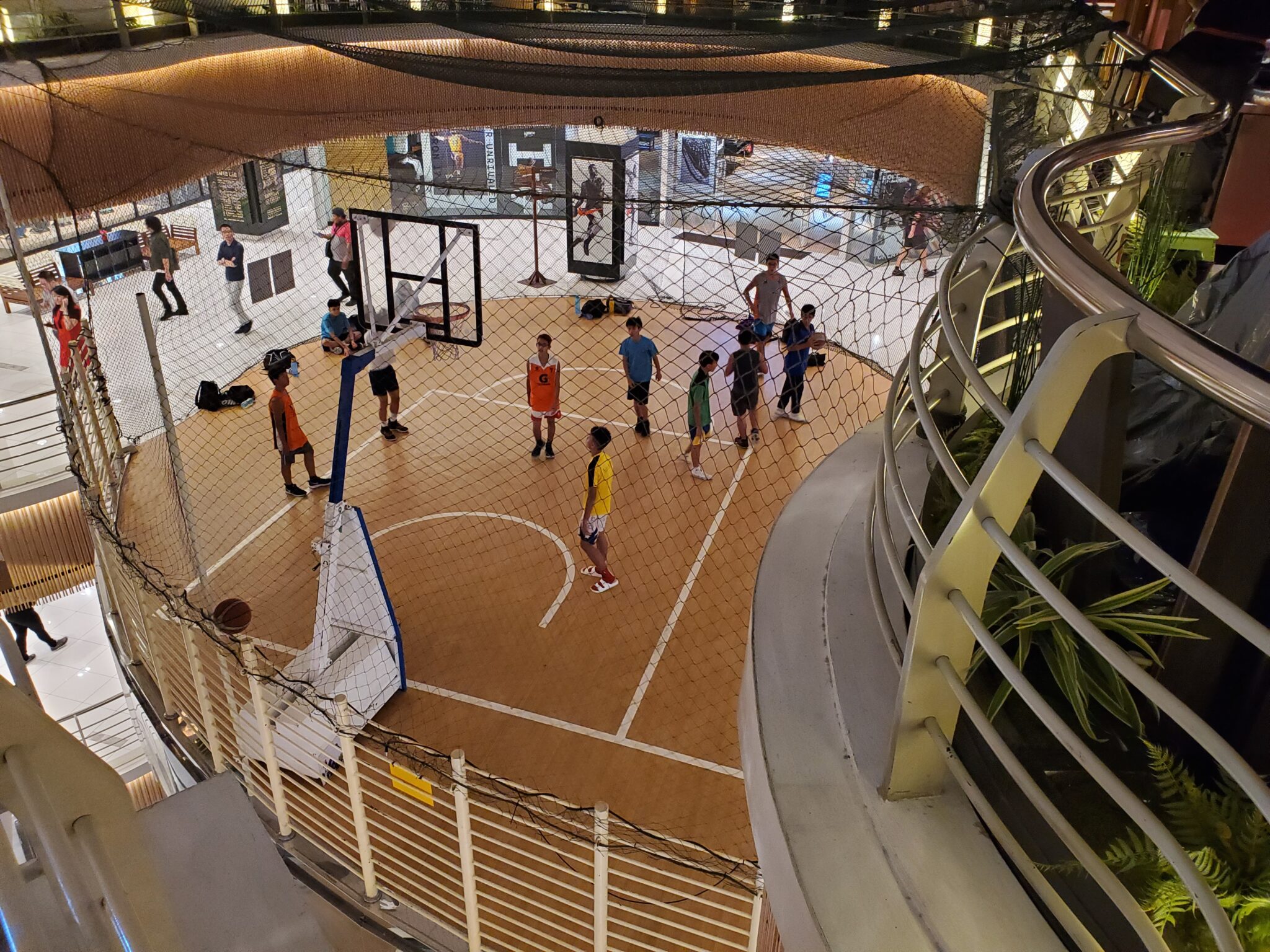 Shot on auto with the Galaxy Fold main rear camera. Good colours and detail even in poor lighting. 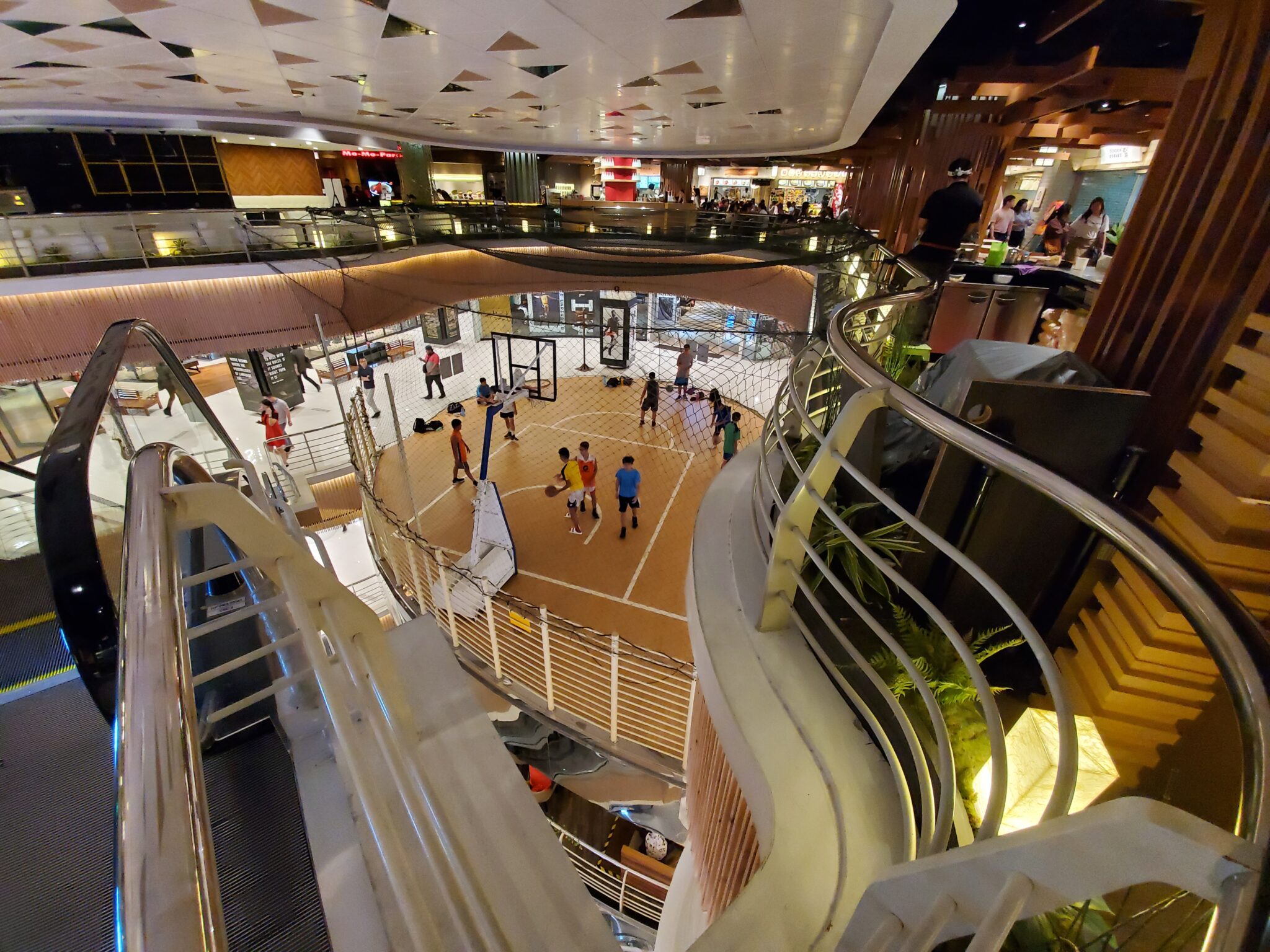 Captured with the wide angle camera of the Galaxy Fold 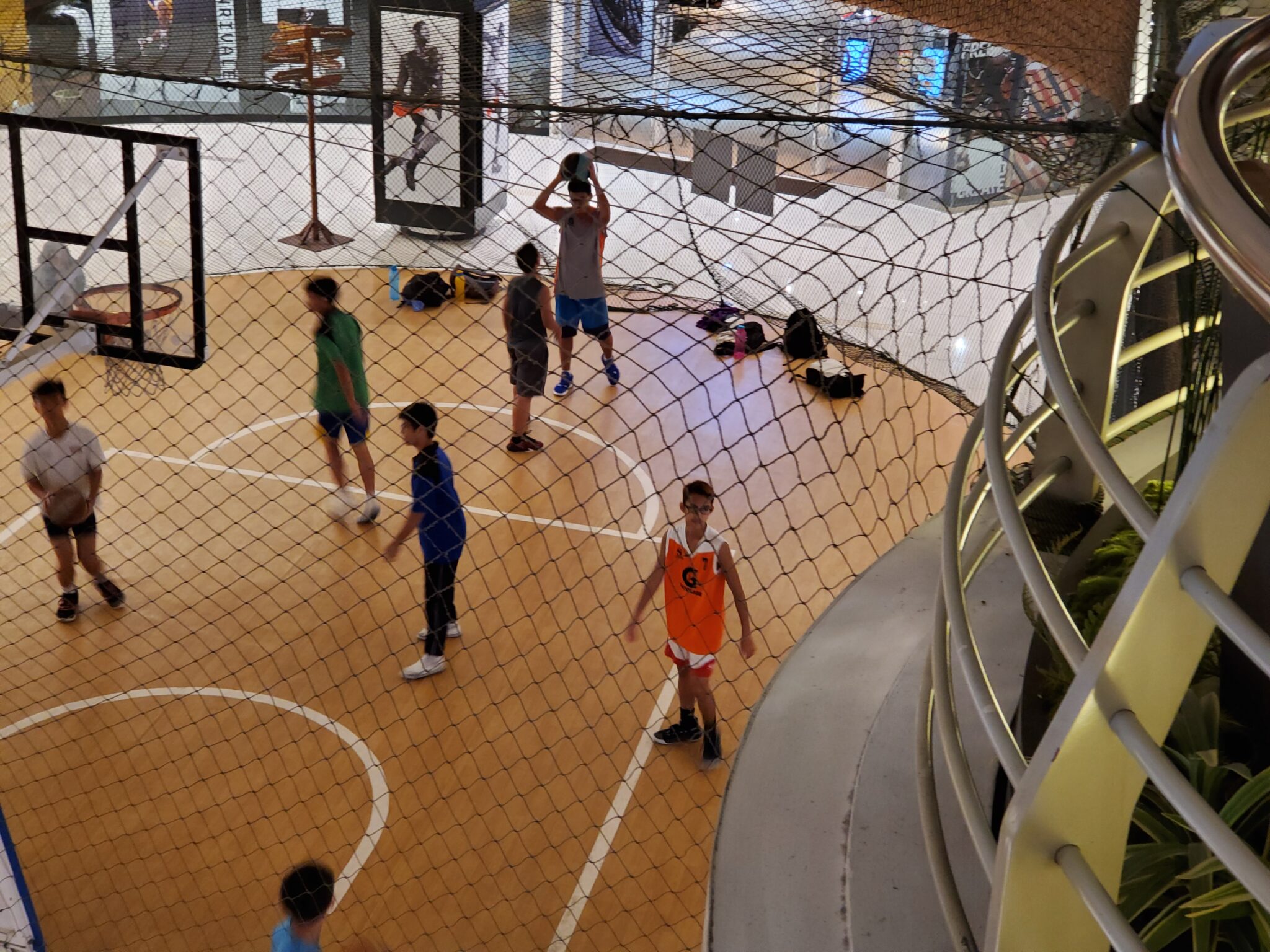 Low light shots did not disappoint, the optical zoom to 2X was excellent and the wide angle cameras captured a wide swath of the landscape without distortion around the edges. Even low light shots were excellent for all three cameras. Both the front facing and dual selfie cameras did a solid job as well. You’ll likely be doing most of your shooting with the phone folded down; when fully deployed it’s far too unwieldy to use the Infinity Flex display as a viewfinder. 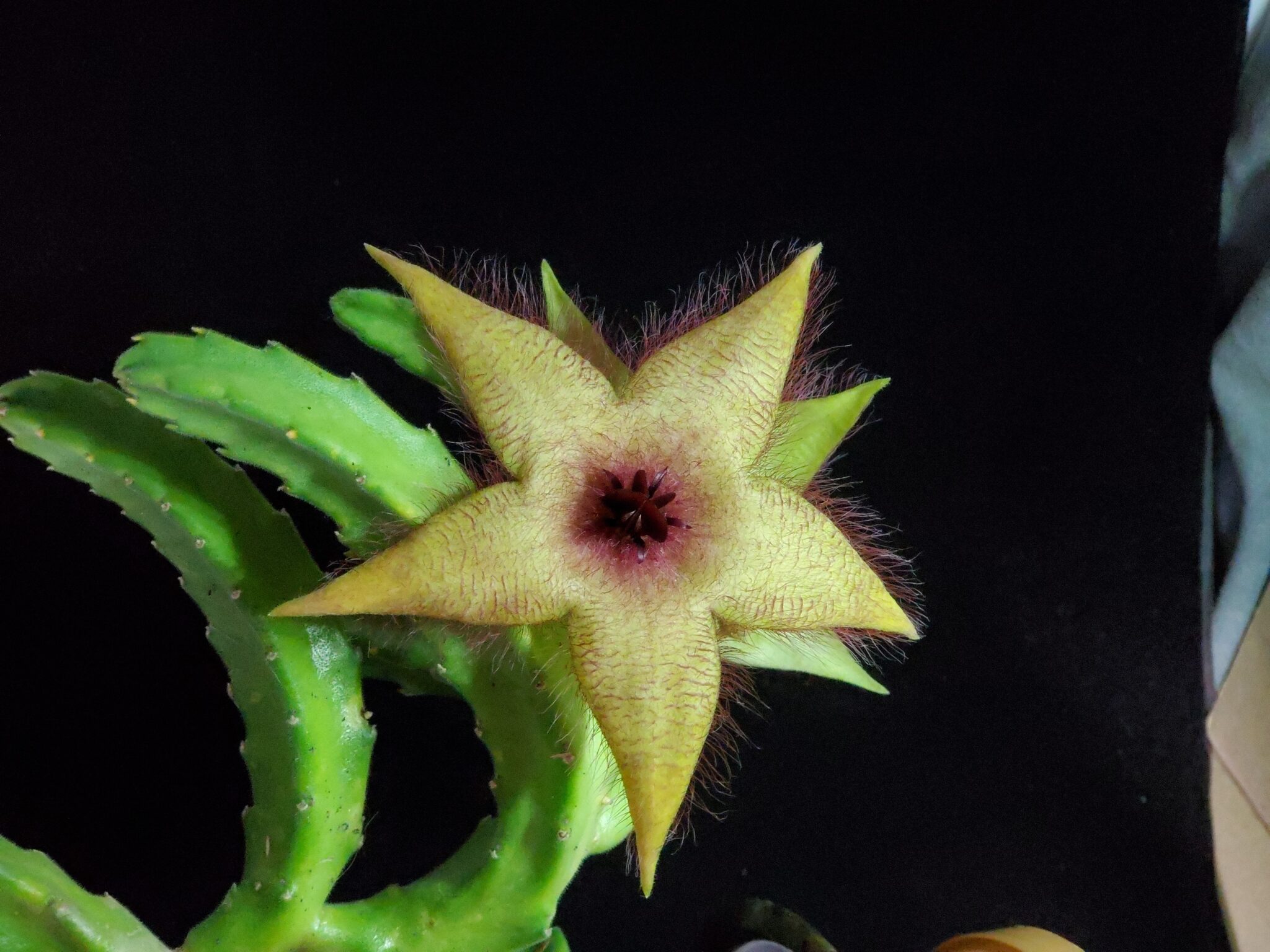 An excellent macro shot of a cactus flower on auto mode 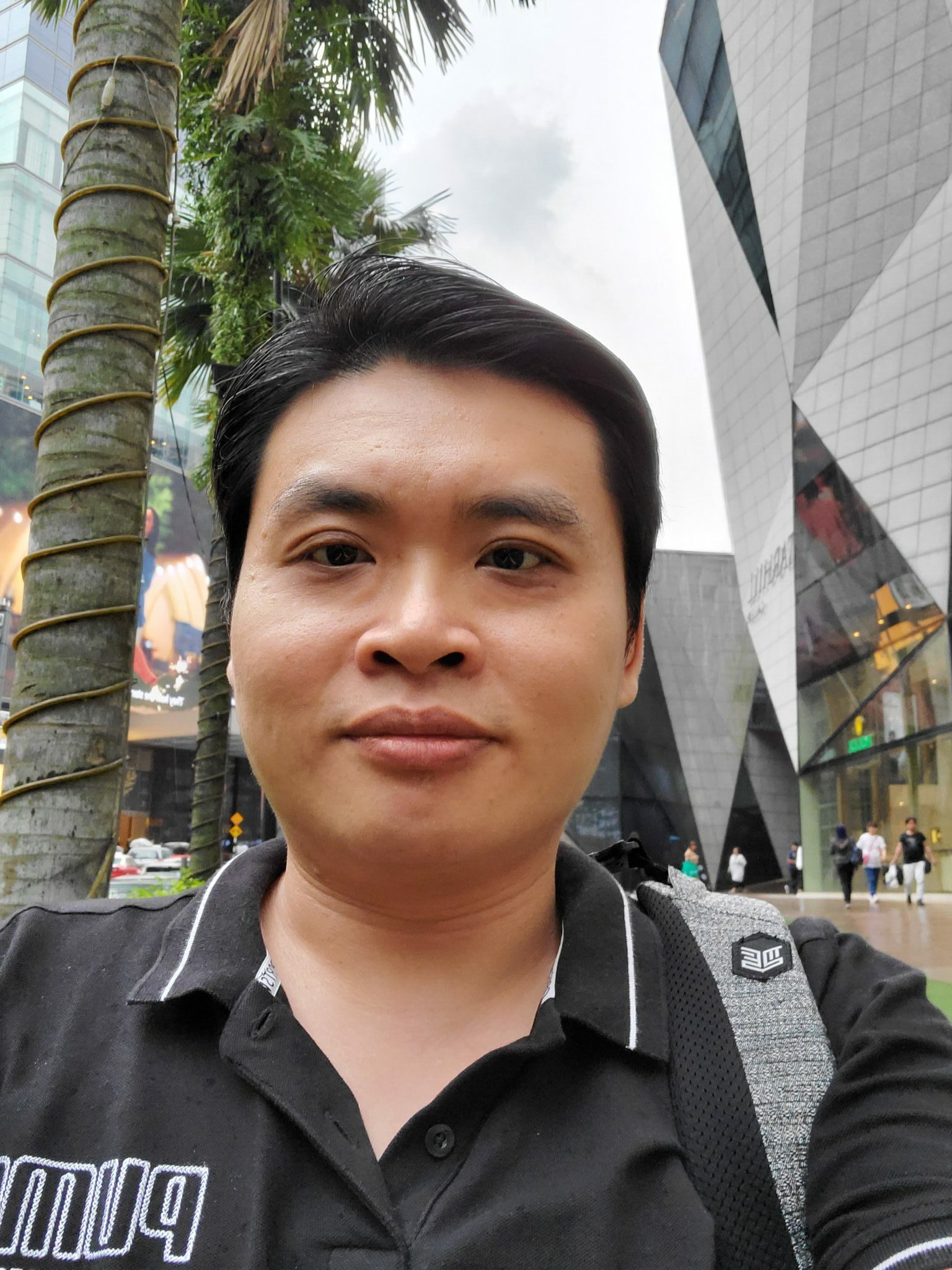 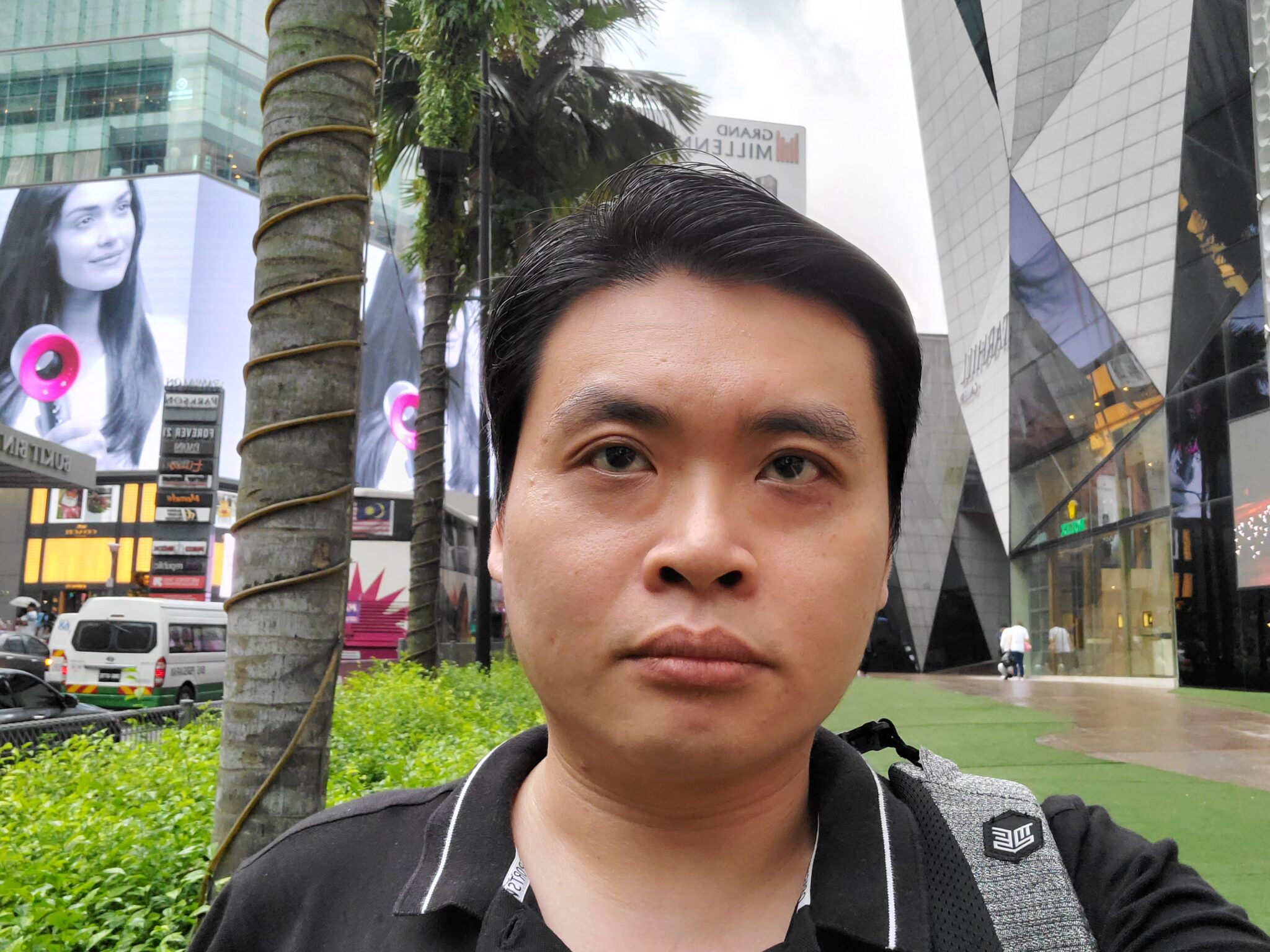 Seeing the unique design of the Galaxy Fold, Samsung has split the battery inthttps://www.hitechcentury.com/wp-admin/post-new.phpo two portions on the left and right panel with equal usage on both sides and a grand total of 4,380mAh available. It’s a bit hard to gauge battery life though as it varies widely on how you use the phone. If you stick to just using the cover display and a normal workload, which is unlikely at best, you can easily eke out nigh on two days of use. More realistically, you’ll be using an equal portion of the big and cover display in the given course of a day. In this regard, we managed to eke out a day of battery life with some gaming, work, movie watching and data on all day. 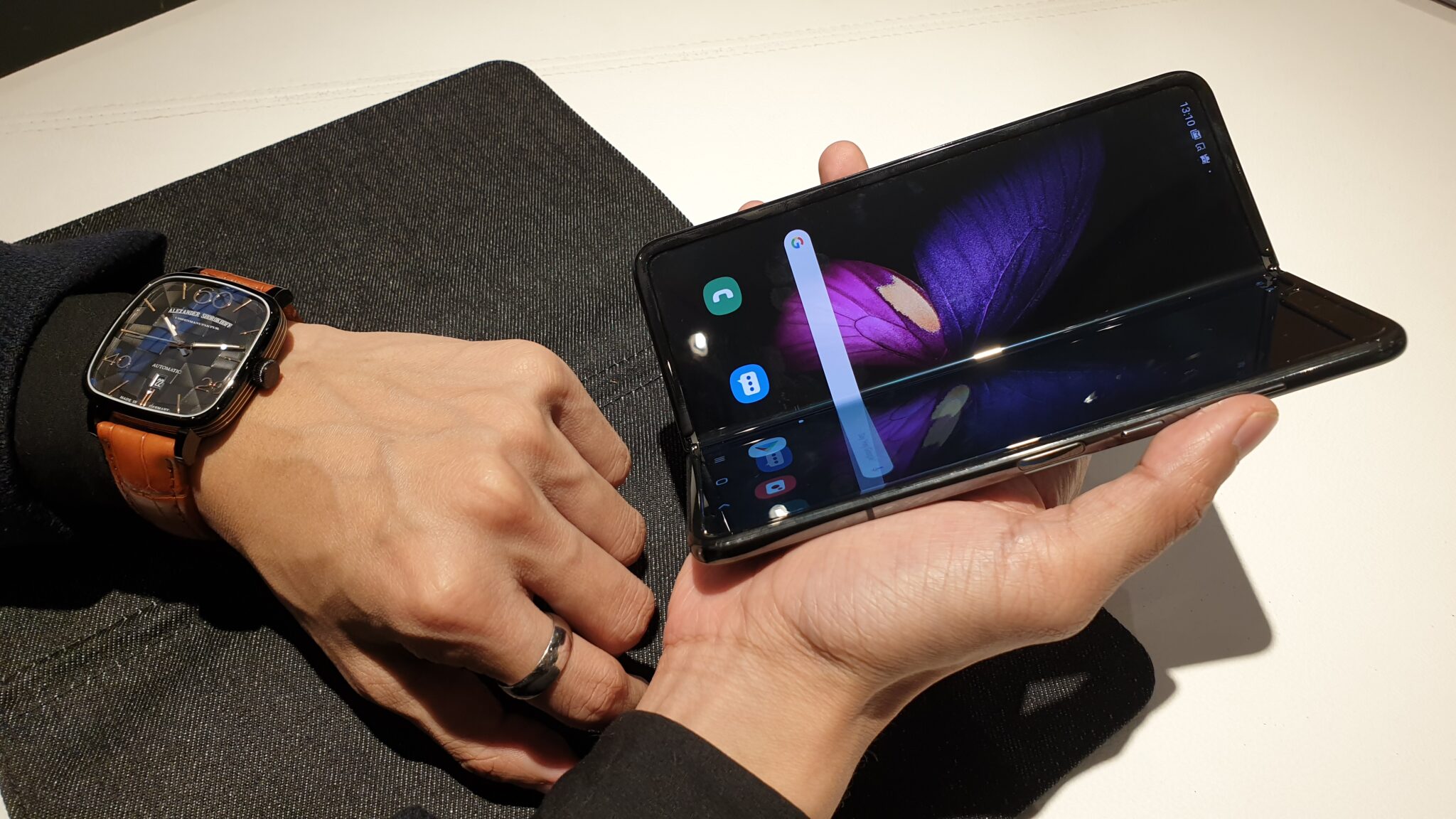 Charging this behemoth can be done wirelessly or hooked up to the mains via the provided 15W charger with it going from dead zero to full in about two hours or so. The phone also has Wireless Powershare, allowing you to juice other kit like the provided Galaxy Buds on the go by simply placing it on the back of the Galaxy Fold. 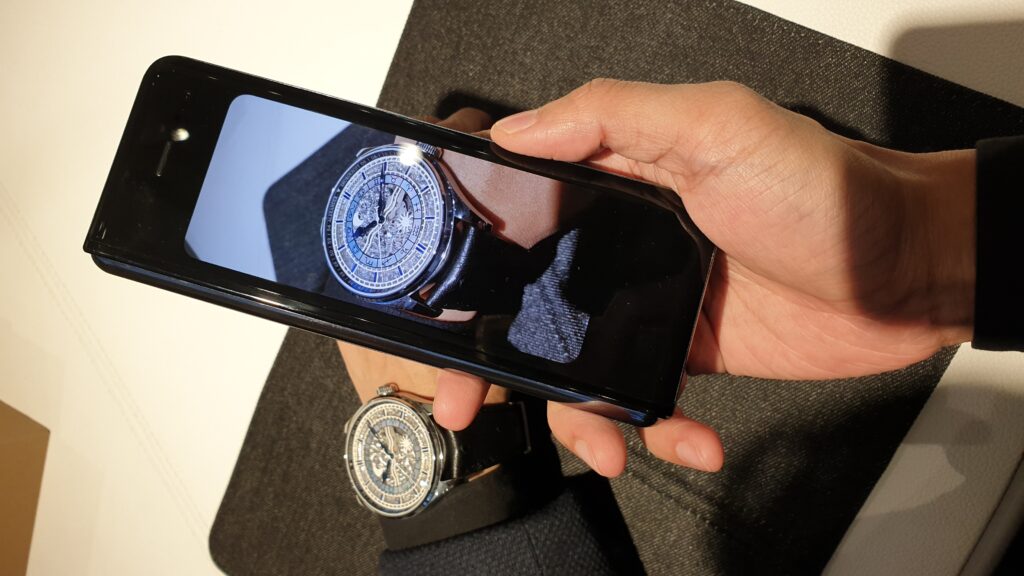 As it stands, the Galaxy Fold is a breathtaking technical achievement as a smartphone and a vision of the future wrought in steel and glass with great performance across the board bar a few hiccups in terms of execution and the user interface. It’s also breathtakingly expensive as a phone and the lack of water resistance plus the need to coddle this pricey investment means that it is best for early adopters. If you’re looking for the most unique phone of 2019 and have deep pockets, the Galaxy Fold is it.

What we liked Exceptional build quality and design, innovative and vivid Infinity Flex display, impressive specifications, has DeX mode support
What we didn’t No expandable storage, no 3.5mm audio jack, front cover display could have higher resolution, no IP68 water resistance
We say The Samsung Galaxy Fold is a vision of the future wrought of metal and glass. The build quality surpasses anything that Samsung has made prior to this and the Infinity Flex screen is a beautiful representation of what will likely become commonplace in the future, offering unique use cases that blend the functionality of a phone and a tablet. There’s a few niggles here and there but they don’t detract from the Galaxy Fold’s next-generation design. If you’re looking for the most innovative phone currently available in the market and money is no object, the Galaxy Fold is it.