All the leaks about the latest devices being launched at the upcoming Samsung Unpacked 2020 event that is less than a week away are coming in faster than we can track them as the Galaxy Z Flip, and of course the Galaxy S20 series have been almost fully unveiled in their entirety. This time around, the Galaxy Buds+ wireless earbuds have just been leaked courtesy of leaker extraordinaire evleaks


The leak reveals a breakdown that lists the basic specifications of the Galaxy Buds+ as well as their price tag as well as how it stacks up to the original Galaxy Buds. Basically, the improved versions sound better, charge faster, have longer battery life, have Spotify support and – most important of all, have iOS support too for good measure without any noticeable tradeoffs bar the increase price at US$149 which is about RM613 with change. 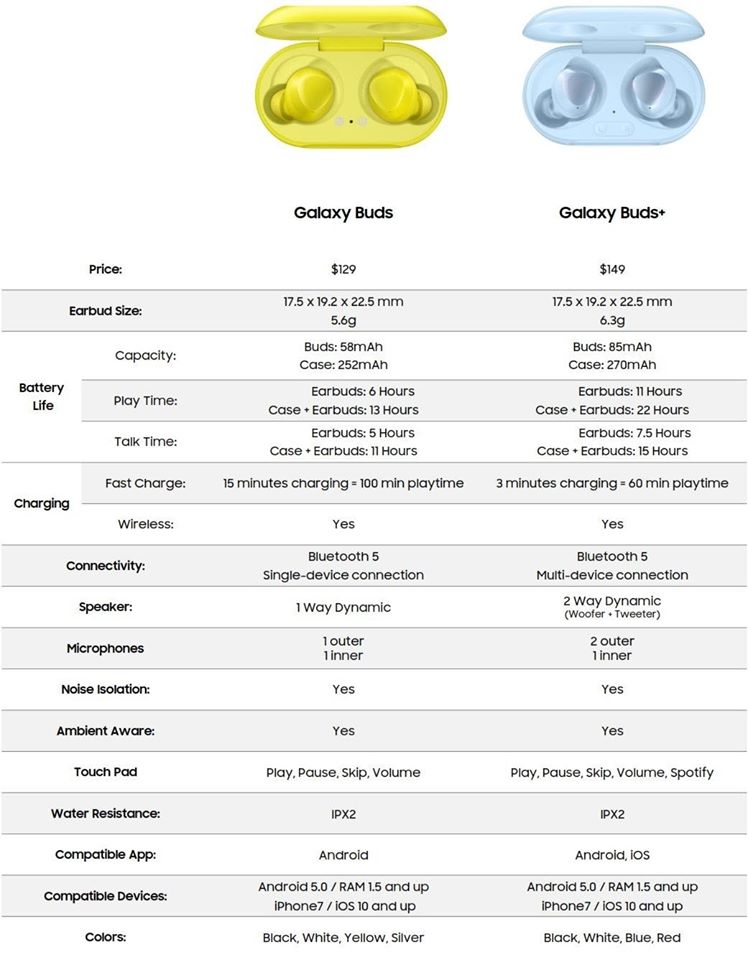 Externally, it has a similar design with a lozenge shaped charging case and colour coordinated earbuds that each come with a control panel and a soft silicone ear tip.  Another leaker Max Weinbach also confirmed the design via a reveal he found on the Apple app store.

Very Samsung if you, Samsung. pic.twitter.com/4aYXNw6AsS

For the release, the Galaxy Buds+ will come in black, white blue and red and has the same dimensions as the original Galaxy Buds but with slightly increase weight in each earbud on account of the larger built-in batteries and addition of a subwoofer and tweeter at 6.3g. The addition of a subwoofer and tweeter should offer much better quality audio than its predecessor though there’s no noise cancellation, at least from what the spec sheet indicates.

The batteries on the buds themselves get bumped up from 58mAh to 85mAh while the charging case itself gets upgunned from 252mAh up to 270mAh. On paper, Samsung rates the Galaxy Buds+ with almost double the battery life of the original with 11 hours on a single charge and an additional 11 hours by juicing it in the charging case for playing music.

If you’re just nattering away via hands free, the battery life goes down somewhat with 7.5 hours per earbud and an additional 7.5 hours in the charging case for a total of 15 hours though a 3 minute charge can give you an hour of playtime. Of note is the addition of a Spotify shortcut on the touchpad. In any case, there’s not much longer now to wait as Unpacked 2020 is just around the corner.