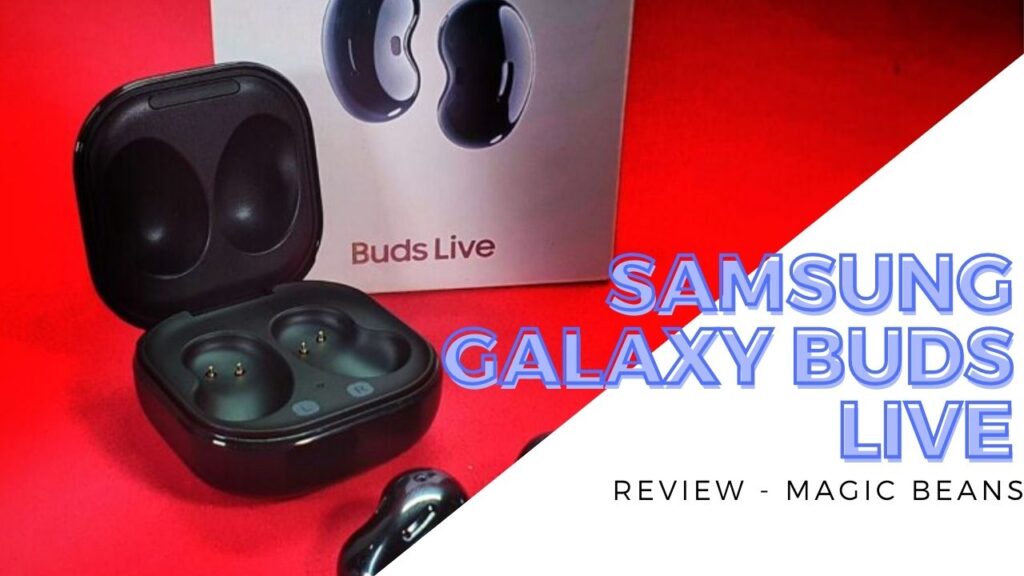 Out of all the wireless earbuds that we’ve reviewed this year, the Samsung Galaxy Buds Live wins hands down when it comes to how unique it looks. It bucks normal design trends to resemble, for all intents and purposes, like a pair of metallic beans. It has been around in Malaysia for a few months and we took the opportunity to put these magical beans through its paces in our in-depth review.

The Samsung Galaxy Buds Live were launched earlier this year in Malaysia and are Samsung’s latest generation wireless earbuds that have active noise cancellation and are successors to the prior Galaxy Buds Plus and Galaxy Buds released in previous years.

The packaging is compact, consisting of a squarish charging case, the bean-shaped Buds Live earbuds and a charging cable. It also has a spare pair of tiny wing tips that fit onto the Buds Live to offer additional friction in case the existing mounted pair goes missing. 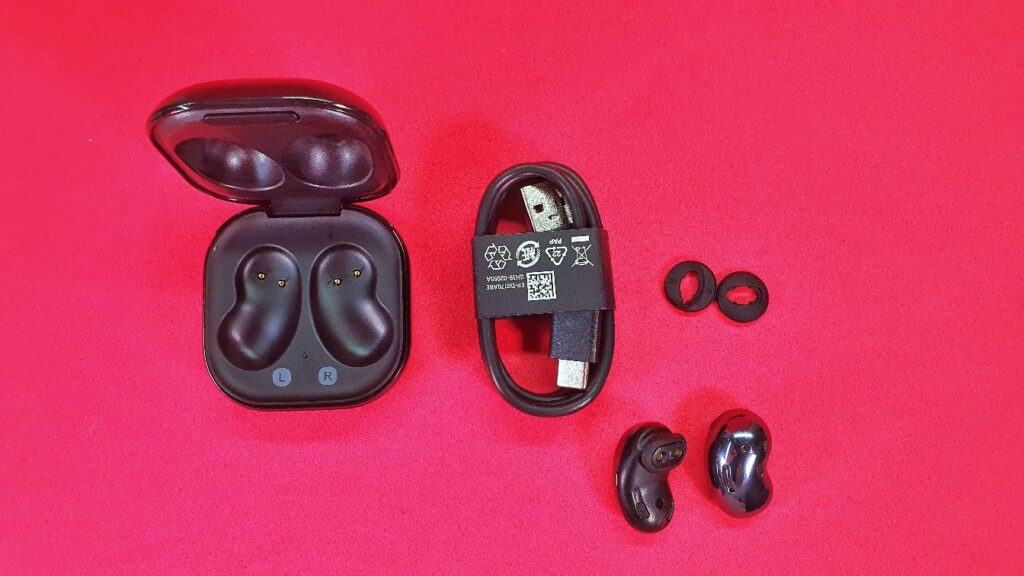 For novelty value alone, the Galaxy Buds Live is unique to the point of being instantly recognisable anywhere. In terms of design, the Galaxy Buds charging case is squarish with rounded edges and is the most compact charging case design for wireless earbuds that we’ve seen this year  The case itself supports wireless charging so you can charge it off a compatible phone like a Galaxy S20 series phone.

It also has a USB-C port on the back for wired charging and is primarily made of shiny plastic. Our test sample came in a shade of black and over the course of several months, we found that it was durable, scratch resistant and hard wearing though the shiny finish is a fingerprint magnet. 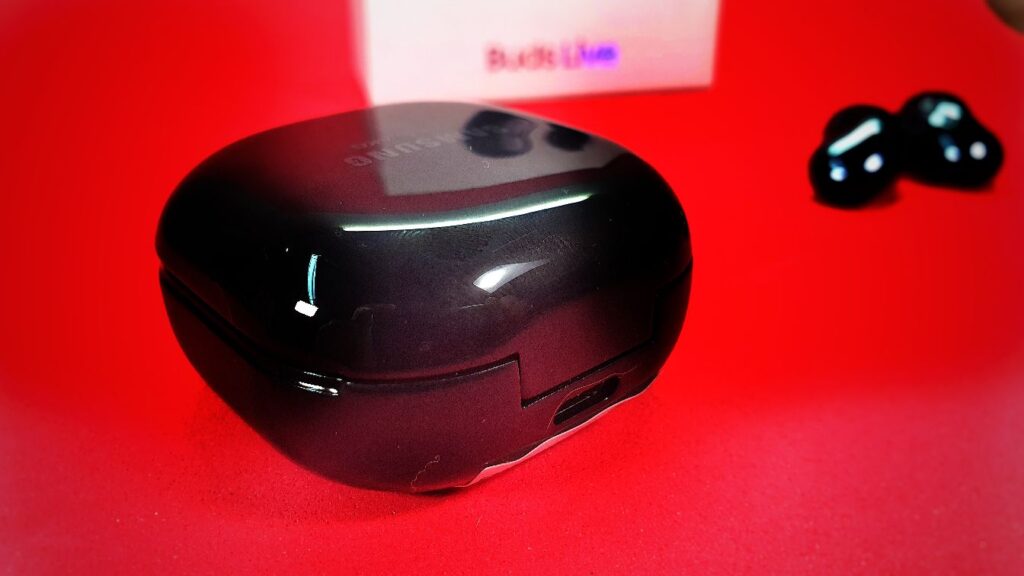 The earbuds themselves are an unorthodox blend of design and practical ergonomics. It’s a complete departure from the older Galaxy Buds Plus and Buds Live. As you’d surmise from the design, the Galaxy Buds Live are open-type earbuds that ditch the soft silicone ear tips that we’ve become accustomed to over the years.

In conventional designs, the silicone ear tips typically act as passive noise insulation to dampen external noise while helping to keep the earbuds secure in your ear. The Galaxy Buds Live lacks these ear tips but its novel design more than makes up for it with one end containing the speakers sticking partially in your inner ear while the rest of it including the touch control panel is cradled in your outer ear. 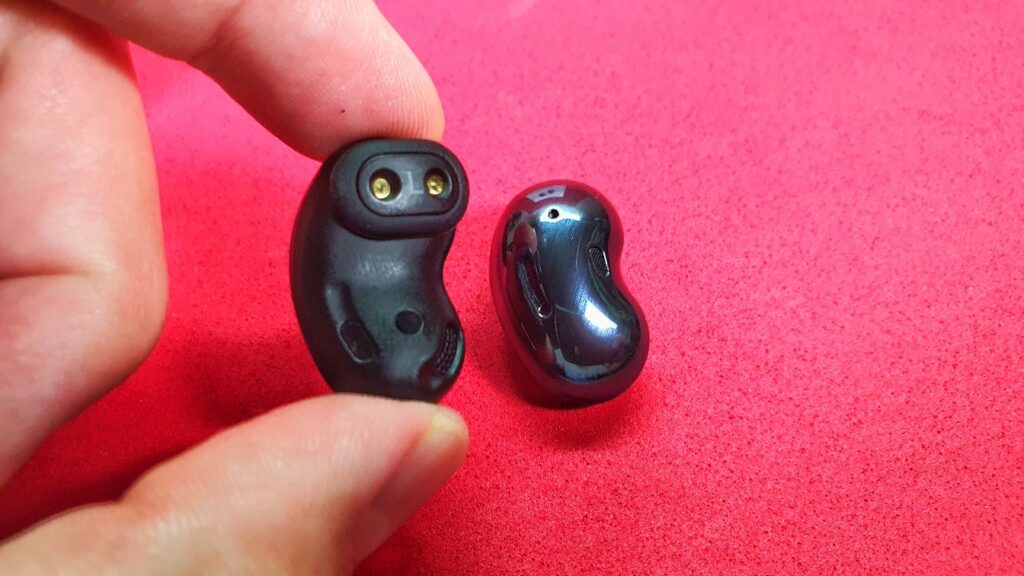 Even with the lack of ear tips and a design that seemingly looks like it can fall off at the slightest provocation, the unique nature of the Galaxy Buds Live’s design means that it’ll fit in most ears and proves to be remarkably secure.  Our sample fit like a glove when we first tried it and won’t come off even with vigorous, deliberate head shaking.

I’ve taken it for walks, fast sprints and more serious excursions and it still stayed securely in my ears without falling off. It’s as secure as any conventional ear tip equipped ear bud short of designs that have external ear wings.

Crammed into each earbud are 12mm drivers with active noise cancellation, a trio of microphones with two facing outwards and one facing inwards, a voice pickup unit and a host of sensors that even integrate an accelerometer. There’s even a modicum of water resistance and the Buds Live are rated for IPX2 which means it’ll survive sweat and a light rain shower.

How to control the Galaxy Buds Live

The Samsung Galaxy Buds Live have an external touch control surface on each earbud. For the most part, the left and right earbuds have mirrored control setups that involve a series of taps.

Once you get over the bizarre design, the Galaxy Buds Live control in much the same way as other earbuds with a single tap to pause or play music, a double tap to move to the next track or take a call and a triple tap to wind back to a previous track that are mirrored for both earbuds. 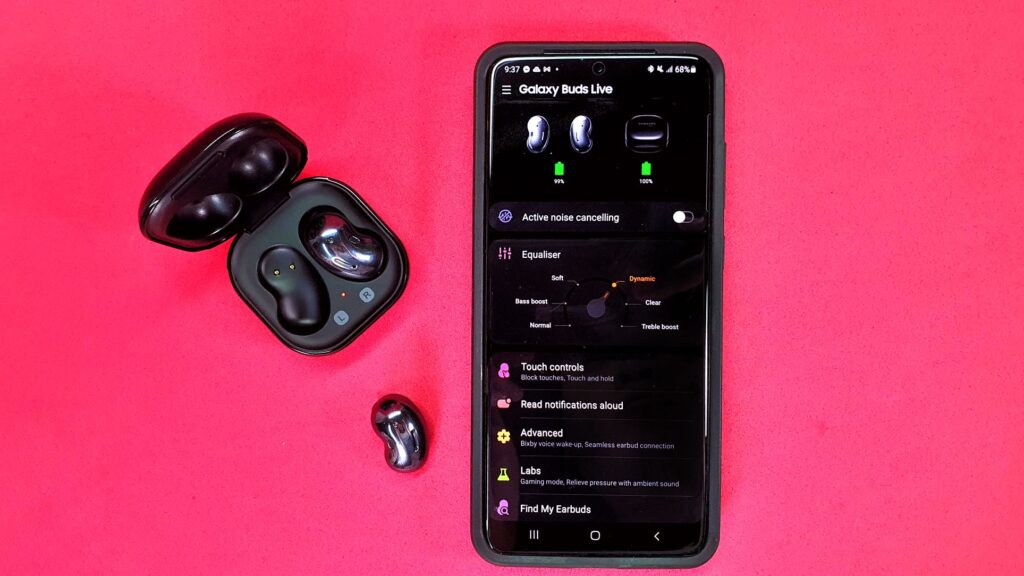 These controls are hard wired into the earbuds but you can assign the ‘touch and hold’ mode to either toggle active noise cancelling, summon Bixby assistant or your Spotify playlist. You can also assign ‘touch and hold’ to control volume with the left earbud for volume down and the right earbud to increase volume.

Getting started with the Galaxy Buds Live

The Galaxy Buds Live can pair with your laptop via Windows 10 Swift Pair mode in seconds or to another phone via Bluetooth 5.0. Naturally, it pairs the fastest with Samsung issued gear and it paired seamlessly and swiftly with a Galaxy S20 Plus. To get the most out of it and the option to customise the equaliser settings, you’ll still need to install and run the Galaxy Wearable app. It’s available on the Google App store and a version of it called the Samsung Galaxy Buds app is available on Apple’s app store.

Once that’s done and sorted, you can tweak what the ‘touch and hold’ controls do, see battery life at a glance and then adjust the equaliser from one to half a dozen other preset settings.If you don’t own a Samsung phone, you’ll have to install the app via the Google Play store. 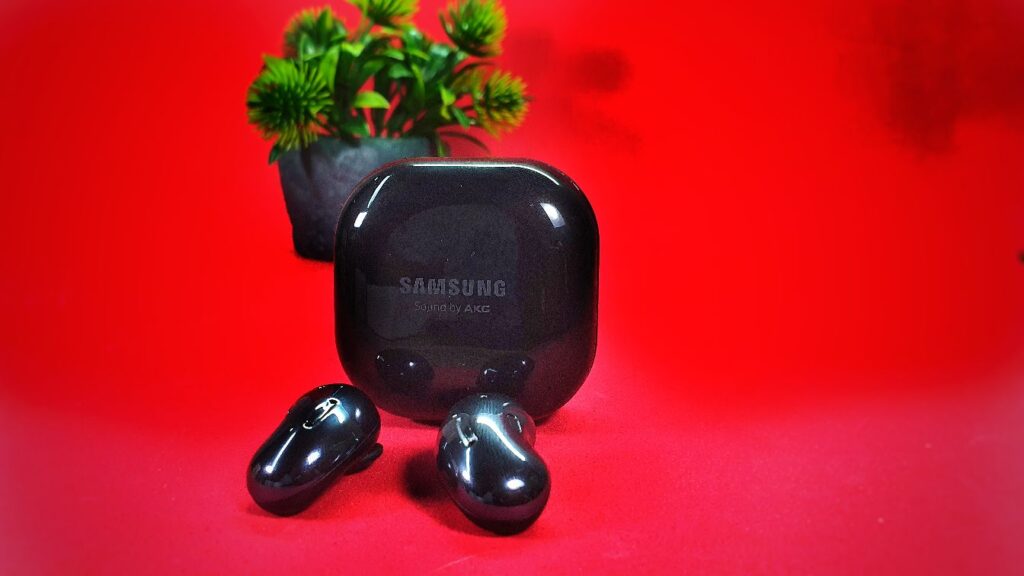 How effective are the Galaxy Buds Live ANC

Over the course of several months, we’ve tested the active noise cancellation (ANC) of the Galaxy Buds Live in a variety of typical usage scenarios from the local train lines, the MRT lines, buses galore, across multiple malls across the Klang Valley, coffee shops of the upmarket and plebeian kind and  a relatively busy wet market. We’ve also tested it in live Zoom calls and in quieter scenarios such as working in the dead of night with our cat to keep us company.

The ANC on the Galaxy Buds Live is easily one of the best available when compared to other open-design earbuds, with the ability to mute out most low level white noise like engine hums, quiet background conversation and the like though sharper, louder noises like car horns, someone shouting a coffee order at Starbucks or someone talking next to you are still audible.

It won’t completely mute out sharp external noises or really loud ones which is something a design with ear tips is theoretically capable of but you can achieve this by cranking up the volume to around 50% of maximum and with ANC on.

Unfortunately, the open nature of the Galaxy Buds Live and the lack of passive noise insulation works both ways – cranking the volume up beyond 50% means that there’s some level of sound leakage: people near you are able to hear what you’re listening to which may or may not be a good thing depending on your tastes in music. This effect is audible especially if you’re listening to music at night. 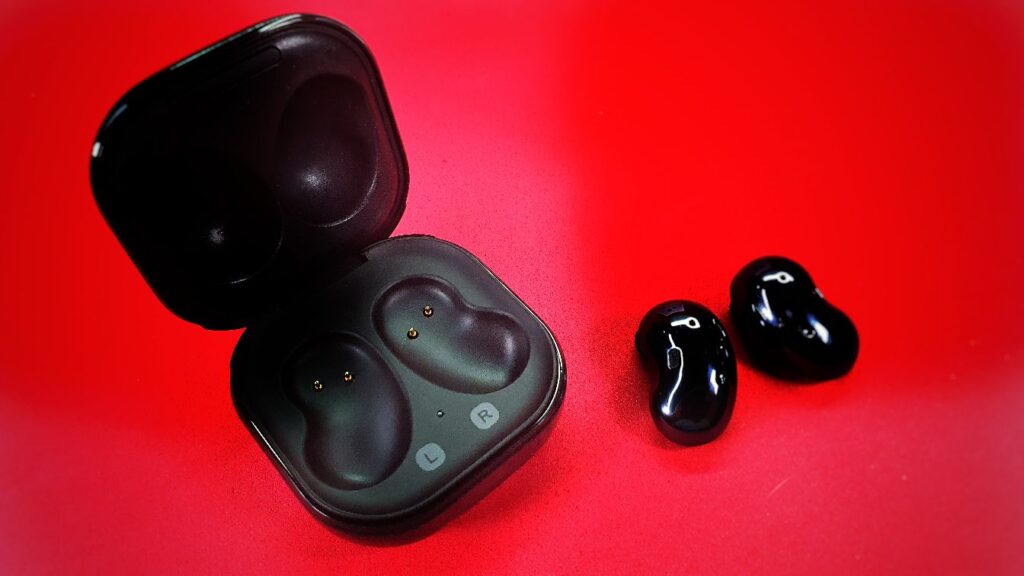 Samsung’s latest wearable earbuds are certainly not pushovers in the performance department and the 12mm drivers are able to deliver a good amount of sound staging and excellent bass for their size and price range. There’s a good representation of mids and highs here with acoustic quality that’s on par and slightly better than what the Galaxy Buds Plus can deliver though it’s not an apples to oranges scenario seeing as the Buds Plus benefit from passive sound insulation via its silicone ear tips.

If the existing acoustic profile doesn’t quite appeal, you can tweak it to one of six different preset equaliser settings via the Galaxy Wearable app though you can’t directly customise the equaliser levels unlike the accompanying apps on some competing earbuds like the Klipsch T5 II True Wireless or the Sennheiser CX 400BT though it has to be noted that these two options don’t have ANC.

In terms of overall comfort, the Galaxy Buds Live were sufficiently comfortable enough to wear for three to four hour stretches at a time before our ears became sore and felt rather stuffy.

They’ve included a couple of experimental settings under their Labs tab in their Wearable App. One feature is  lengthily labelled ‘Relieve pressure with ambient sound’ that allows external noise to filter in via the mics when ANC is turned off. This made it a bit more pleasant to wear for an hour or two longer. 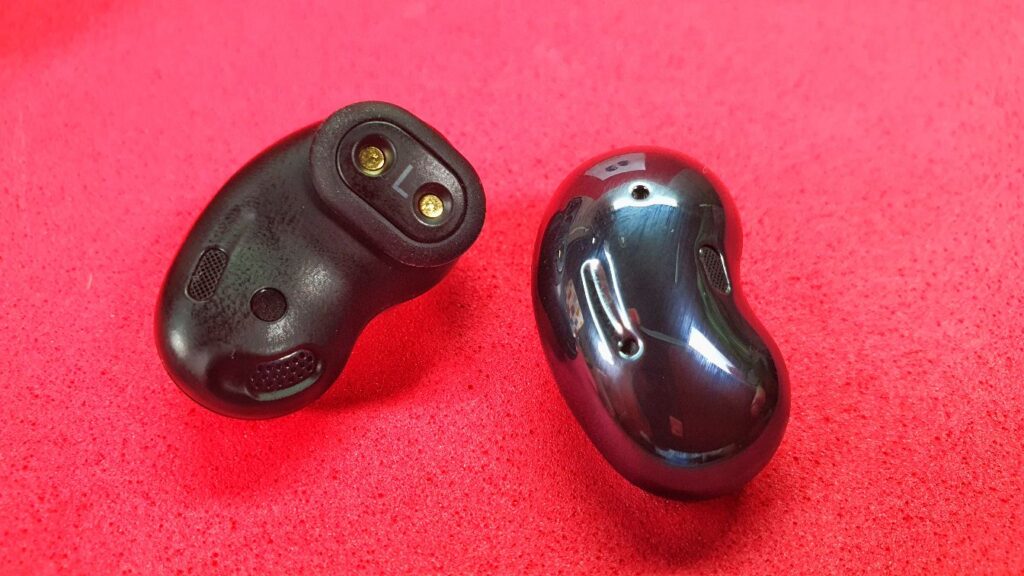 The earbuds also have another feature under their Labs tab which is a low latency gaming mode though we didn’t experience significant differences in how fast sound travelled in Call of Duty Mobile, PUBG and Asphalt 9. Rounds fired downrange and vehicular collisions didn’t experience any noticeable lag or improvements over existing performance.

I used it when paired up to a Windows 10 laptop and also on a Galaxy S20 Plus with the former on multiple Zoom conference calls and the latter mostly when taking conventional voice calls. Both proved to be wonderfully clear across both sides of the divide with minimal background noise.

All this combined makes it an excellent general purpose pair of earbuds for work especially and play .

Add in the charging case which offers an additional 12 more hours of use or the equivalent of two full charges and you have enough endurance to easily last several days of casual use. Charging it was a simple affair too as you can do it wirelessly via a charging pad or the back of a Samsung phone with PowerShare or using a USB-C cable.

Why buy the Galaxy Buds Live

The Samsung Galaxy Buds has an unorthodox design for wireless earbuds but executes it in an effective fashion. The bean-shaped earbuds stick in your ear like glue while offering good active noise cancellation and audio performance across the board though water resistance isn’t the best available in the market. The good part is that it delivers good voice quality for calls along with decent comfort for extended use, making it an excellent pair of earbuds for work and play.

If you prioritise stronger passive sound insulation for work in noisy environments, the older Galaxy Sound Plus is both cheaper and still available with much of the same audio quality as the Galaxy Buds Live.

Available for purchase online at Samsung’s online store at https://www.samsung.com/my/audio-sound/galaxy-buds/galaxy-buds-live-mystic-bronze-sm-r180nznaxme/ 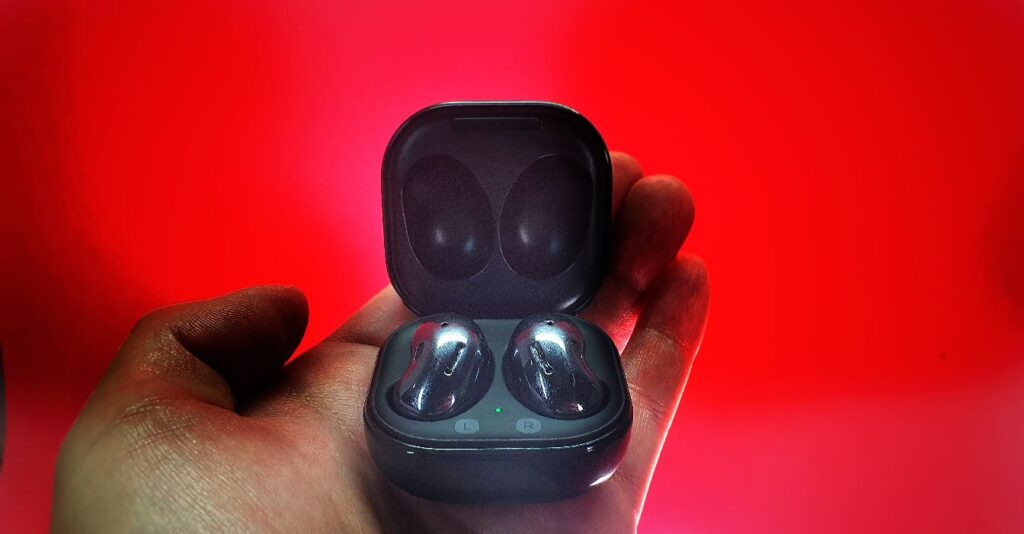 The Samsung Galaxy Buds Live boasts of an unmistakable design that proves to be surprisingly comfortable while offering good audio quality supplemented by decent active noise cancellation. Add in easy pairing with laptops with Windows 10 Swift Pair and fast smartphone pairing you have the makings of an excellent pair of general purpose earbuds for both work and play.