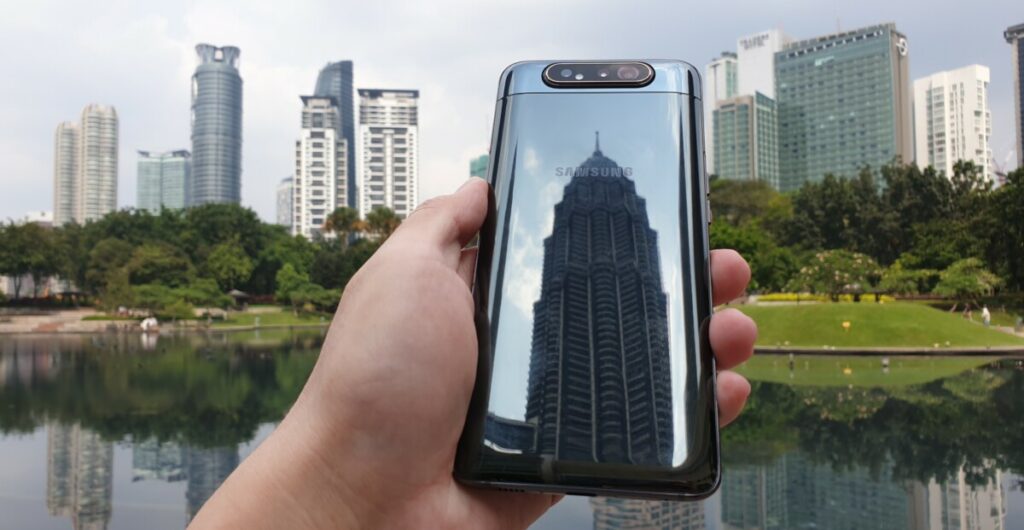 The Samsung Galaxy A80 is easily the most powerful midrange offering from their Galaxy A-series phones and integrates a rather uniquely engineered solution that aims to resolve one of the classic problems in any smartphone – inconsistent front and rear camera quality.

The traditional solution in many smartphones is to integrate a separate set of front-facing and rear-facing cameras for selfies and the obligatory food and scenery snaps.

The problem here is that there usually isn’t enough space in the front to mount a larger or better quality selfie camera which often leads to many phones having a better rear camera than the front or view versa if it’s a selfie-centric phone. 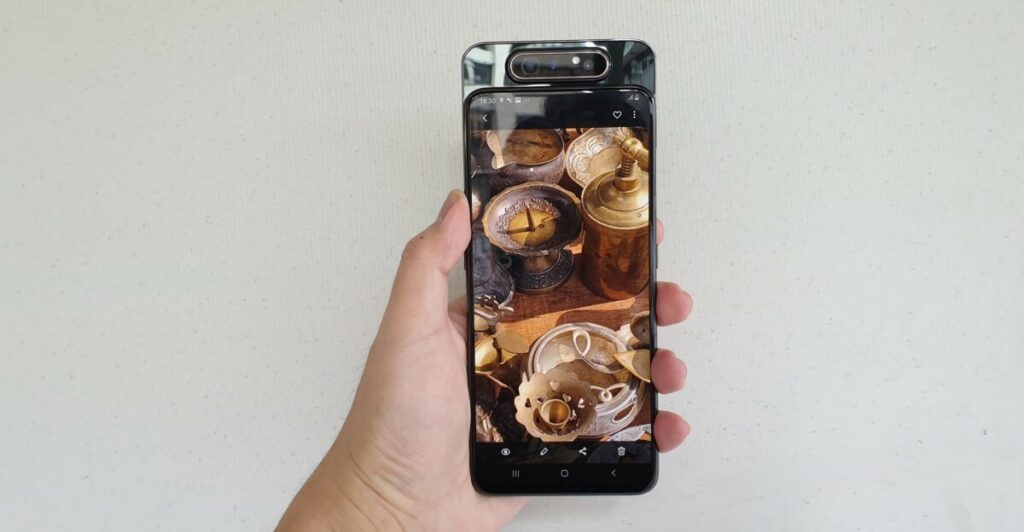 The Galaxy A80 aims to resolve this age-old conundrum with a hefty dose of precision engineering. Rather than plonking in separate cameras, the Galaxy A80 has integrated a motorised mechanism that flips the sole triple (48-MP+8-MP+TOF 3D camera) camera array to the front or back as needed.

The solution has been attempted in other phones by other manufacturers prior to this but the Galaxy A80’s approach is perhaps the most polished yet. You can check out our feature on how it works here.

While conventional engineering doctrine would necessitate the inclusion of at least two motors in such a mechanism – one to slide the camera up and down and another to flip the camera array front and back, Samsung has come up with an elegant system that only needs one motor to do the job and sets the entire mechanism on a set of toothed rails that lock the camera in place on the front or rear. You can check out how it works in detail in our prior piece here. 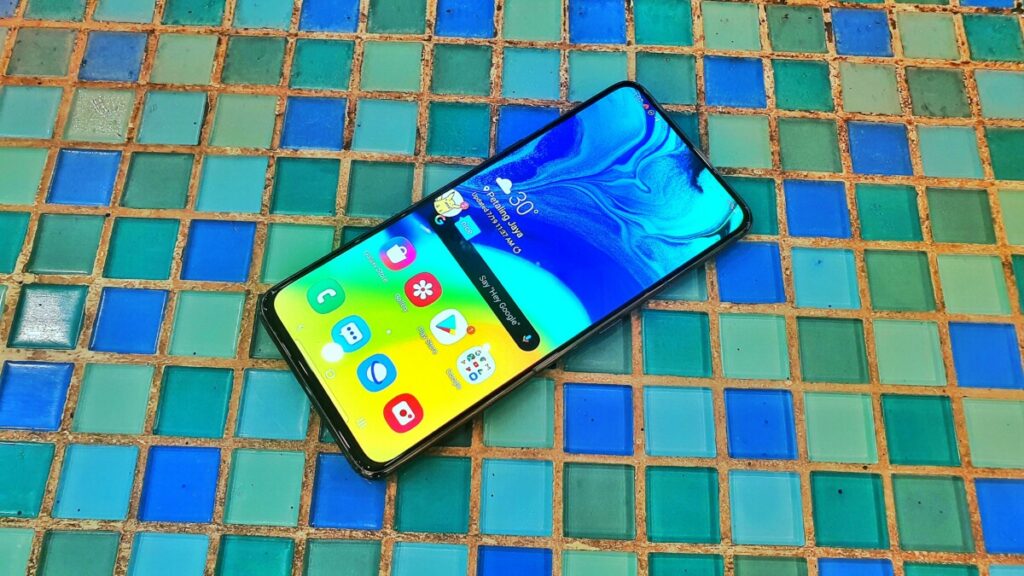 A side benefit to moving the camera array away and into a separate mechanism is extra screen real estate and the Galaxy A80 sports a massive 6.7-inch Super AMOLED FHD+ panel up front with a very respectable 20:9 aspect ratio and 393ppi. Samsung has also chunked out for an under-display fingerprint reader to ensure the whole affair retains its stylish minimalist appearance.

The backplate is essentially a smooth slab of mirrored glass save for the Samsung logo emblazoned on the back. Unfortunately, as with many other phone backplates with a mirrored finish, the Galaxy A80’s glass back proves to be a fingerprint magnet that’s slippery to boot. Fortunately, they’ve included a textured plastic protective casing that goes some way towards protecting the finish and providing some measure of grip to the phone. 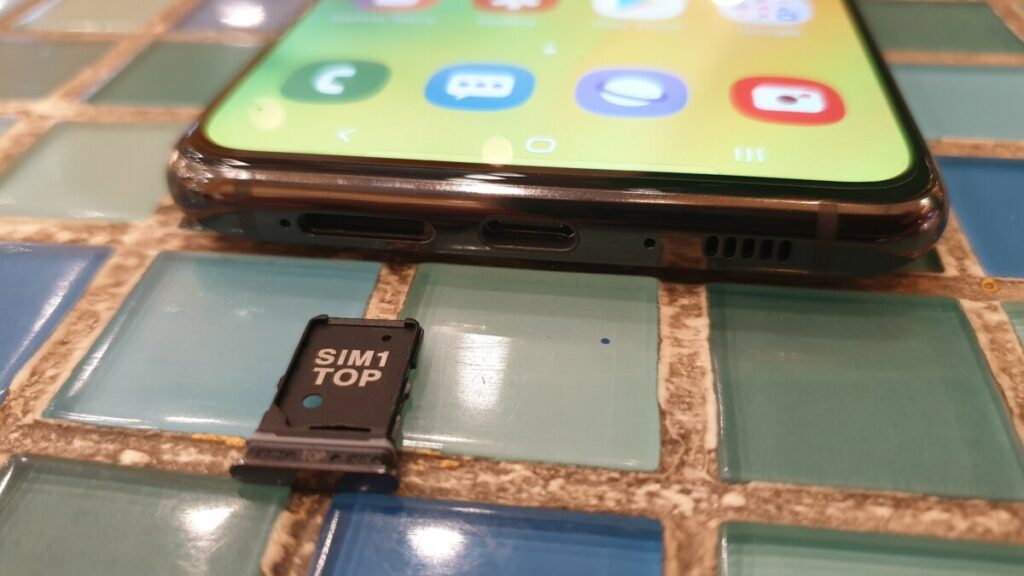 Next to the card slot is a USB Type C port and grille for the sole mono speaker on the phone. Alas, the Galaxy A80 lacks an audio jack but they’ve fortunately included a pair of wired USB Type-C earbuds with the phone though the packaging lacks a 3.5mm-to-Type-C dongle so if you’ll have to source one yourself if you still want to use a traditional pair of headphones.

In terms of the available kit bundled with the Galaxy A80, Samsung has fortunately gotten most of your needs sorted out. On top of the aforementioned protective plastic case and Type-C headphones, the phone also comes with a Type C USB cable and a 5V/3A fast charger to take advantage of the phone’s 25W fast charging.

Galaxy A80 performance and specifications

The Samsung Galaxy A80 is one of the few phones in the market to pack the new Qualcomm Snapdragon 730 octacore processor while running Android Pie 9.0 with their One UI under the hood. This is paired with 8GB RAM and 128GB of non-expandable storage.

With such a lofty price tag tacked to the Galaxy A80, it feels inevitable to compare it to a flagship class phone with the closest equivalent in price being the Galaxy S10e which is a true flagship phone that is just RM200 more but the Galaxy A80 does have its charms if you’re looking for a larger display, a better front camera and if you aren’t a full-on heavy user.

When subjected to synthetic benchmarks. The Galaxy A80 scored 202,889 points in Antutu 3D. In GeekBench, it had a single core score of 2,491 points and a multicore score of 6,865 points which has better performance than the older Galaxy Note 8’s single and multicore scores back in the day. In PCMark, it got a Work 2.0 performance score of 7,348 points while in PCMark, it got a score of 2,379 in the Sling Shot Extreme OpenGL ES 3.1 benchmark though it was unable to handle the Sling Shot Extreme Vulkan benchmark.

This is on par and better than several of the scores demonstrated by the only other phone with a Snapdragon 730 processor currently available in Malaysia – the Xiaomi Mi 9T – though that in itself is less than half the price of the Galaxy A80 albeit with significantly less RAM and onboard storage.. 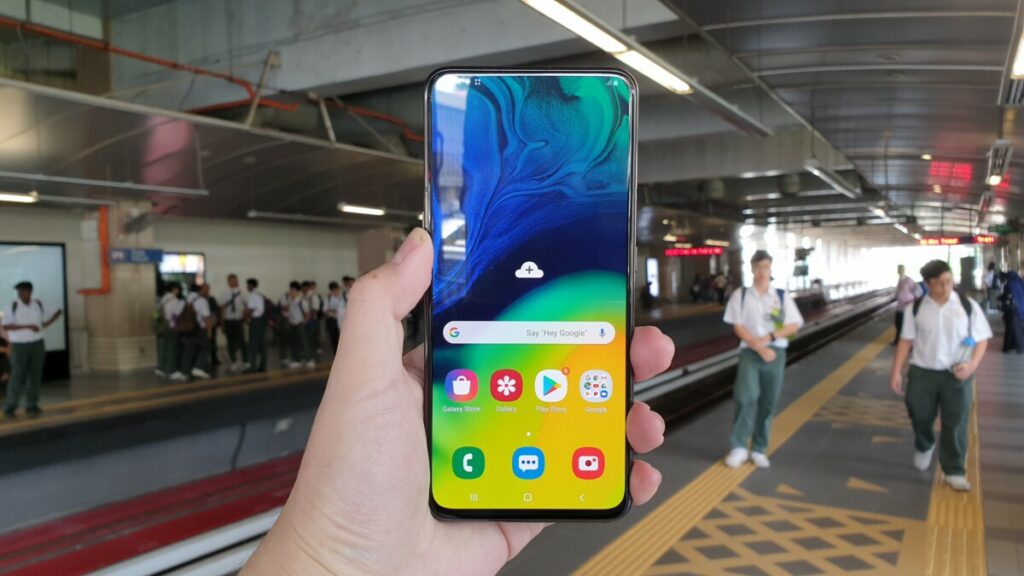 Getting the phone unlocked with the under display fingerprint ready was pleasantly swift and navigating the user interface via their One UI was an intuitive affair. Apps fired up in a snappy fashion and the generous amount of RAM and recent vintage of the processor ensure that it was able to tackle the likes of PUBG on high settings and other demanding games like Asphalt 9 with fast loading times and silky smooth animation.

The Galaxy A80’s large Super AMOLED display proved to be a delight with excellent colour rendition and sufficient brightness for use in daylight and excellent contrast. Text as well as other details appeared pin-sharp onscreen. While it’s capped at FHD+ resolution, it’s more than enough for all but the most demanding users. Catching Netflix on the expansive display was a real treat on the commute where it’s large size and vibrant display made watching the Star Trek Discovery a real treat.

Unfortunately, the sole mono speaker at the base proved to be serviceable at best. Like many other phones with a similar speaker emplaced at the base of the phone, the Galaxy A80 was capable of delivering fair volume and a flat sound stage with somewhat underwhelming detail and bass. It’s all right for a casual listen but if you’re looking for a better listening experience you’d do better with a pair of Galaxy Buds paired with it.

The Samsung Galaxy A80 mounts a primary 48-MP F/2.0 camera, a secondary 8-MP F/2.2 camera with an ultrawide angle lens and a third ToF camera that helps to capture depth data for better portraiture. As it says on the tin, the Galaxy A80’s main calling card is that it can swing this camera array to the front and back as needed for selfies up front and scenery, food shots or whatnot on the rear. This setup also allows you to capture 4K UHD resolution video either on the front or rear as needed. 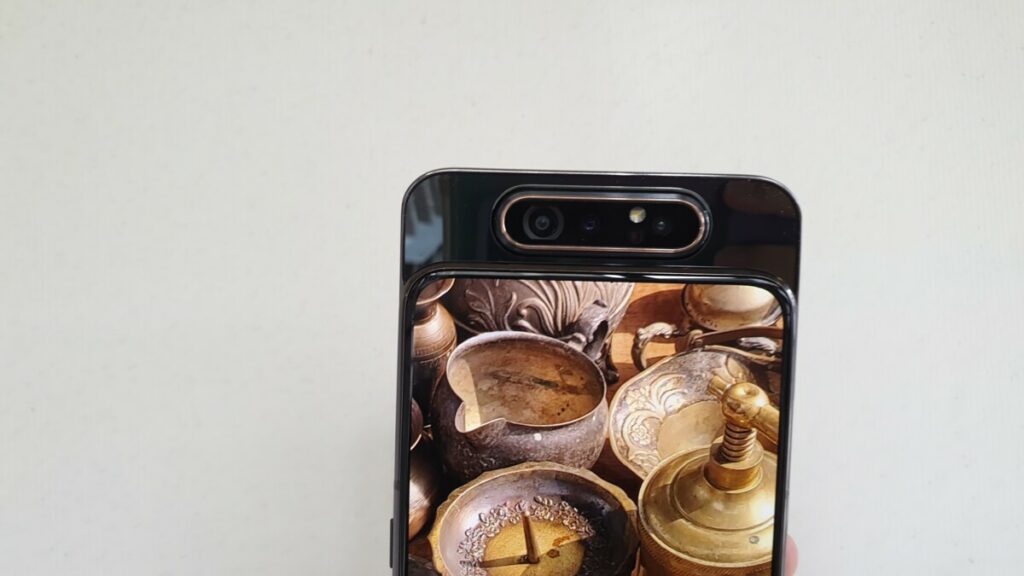 In terms of deployment speed, the Galaxy A80’s motorised pop-up mechanism isn’t the speediest but it proved to be sturdy and even after several hundred deployment tests moving it up and down, front and back, it did not botch a single one.

Seeing as this is a Galaxy A series phone, the Galaxy A80 uses the simplified version of the camera user interface rather than the fuller featured one seen in their higher end Galaxy S and Note series flagships. This results in a gimped version of their Pro mode where you can only modify ISO, white balance and exposure levels. 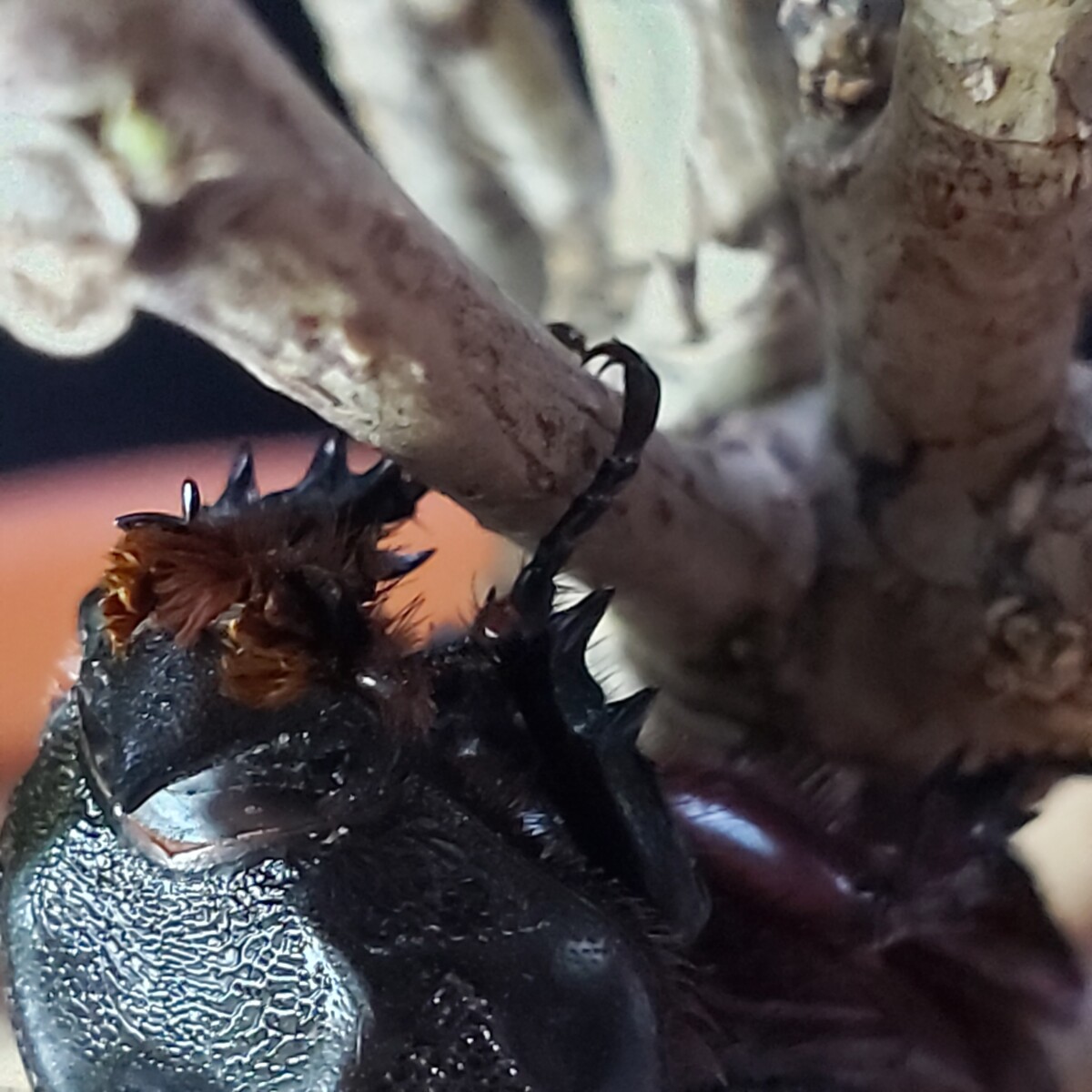 Pro mode aside, the Galaxy A80 features an impressive Live Focus mode that artfully bokehs the background along with a Live Focus Video mode that does the same thing for captured video. 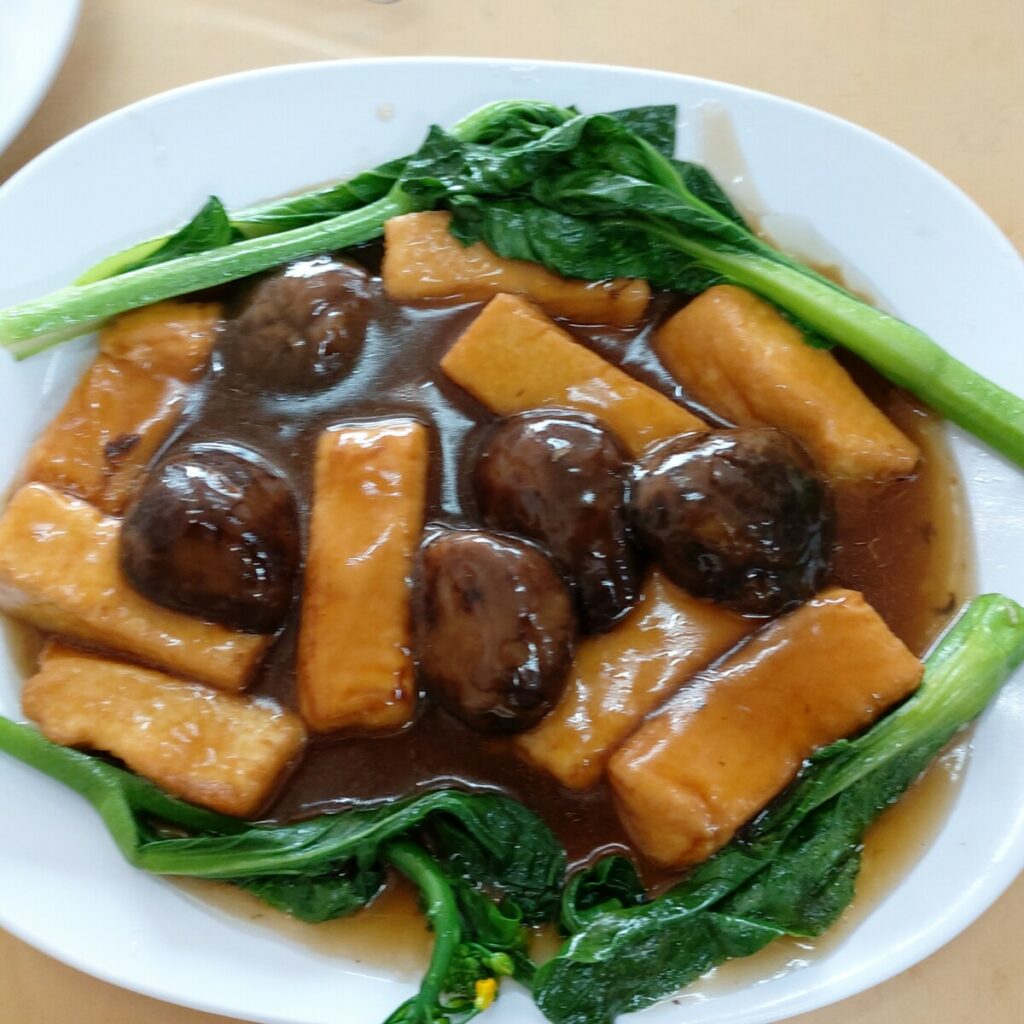 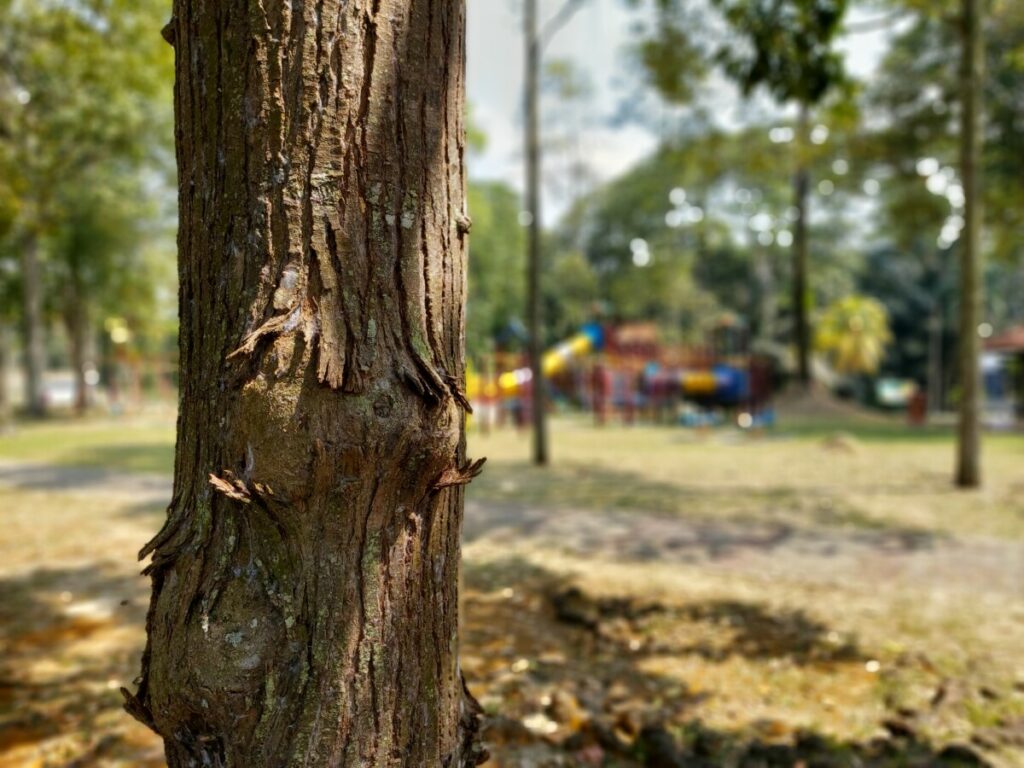 A sample with Live Focus mode enabled and dialled to maximum

Taken with the primary camera of the Galaxy A80 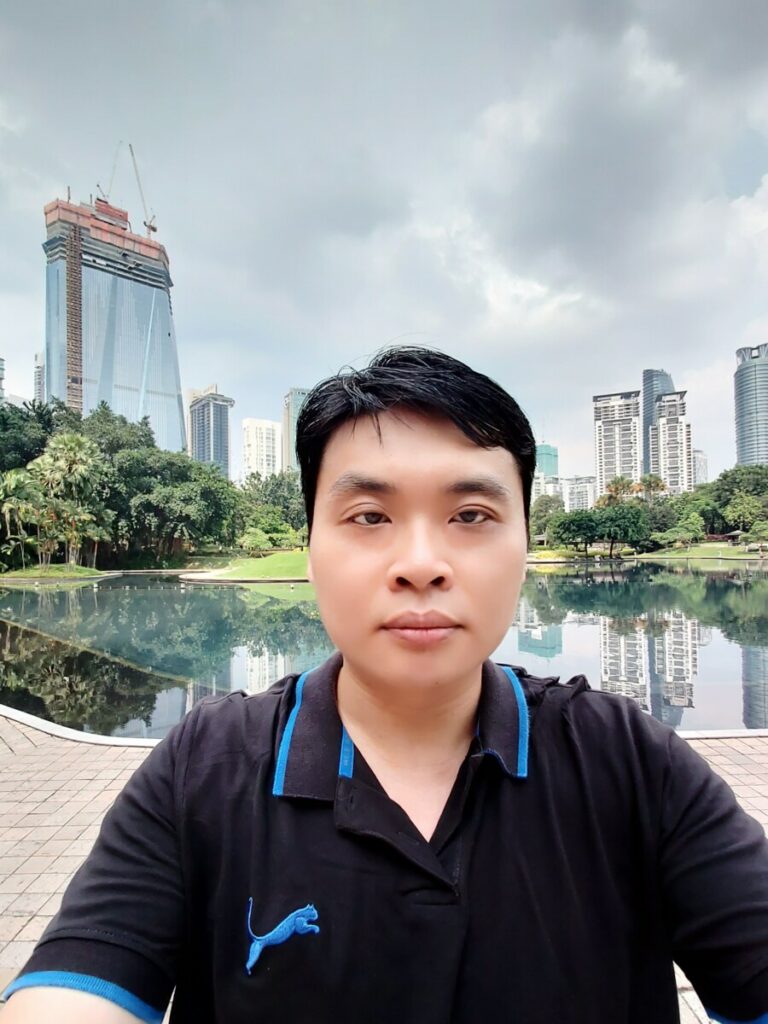 Selfies are impressive when taken with the Galaxy A80

Snaps captured on the camera array were good across the board under daylight conditions with good colour rendition and detail on both the primary and wide angle cameras. Wide angle shots also exhibited very little of the characteristic distortion around the edges prevalent in wide angle cameras and looked pretty darned good indeed. Low light shots were decent if somewhat soft looking on auto mode though Night mode yielded shots with slightly better contrast. 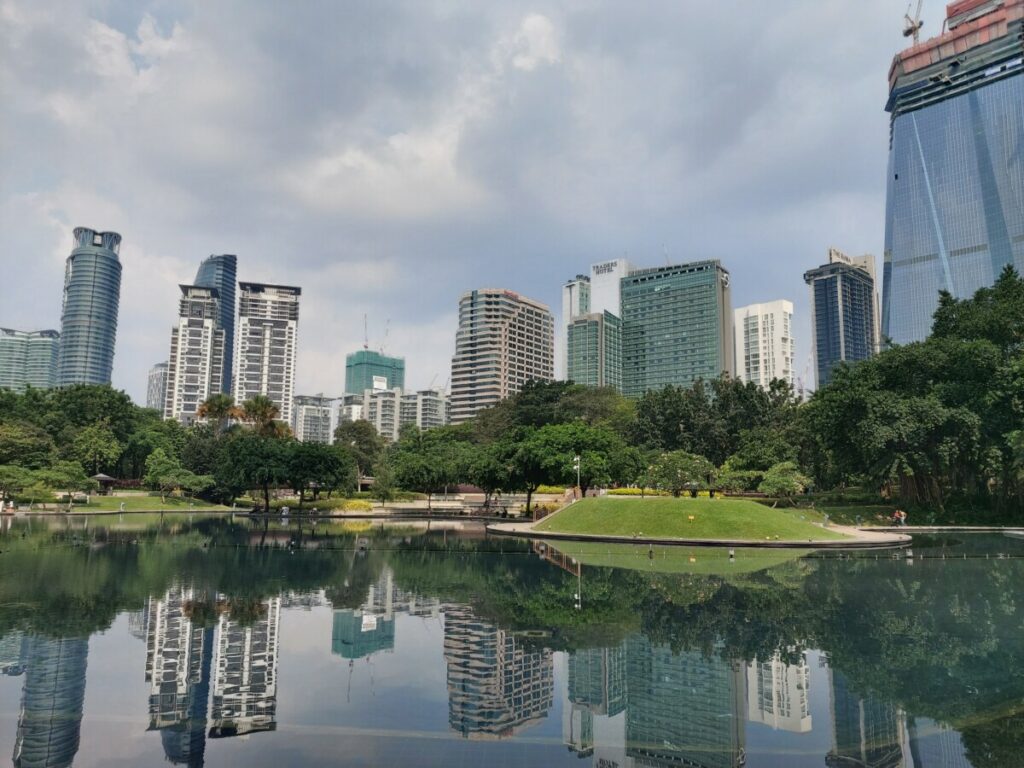 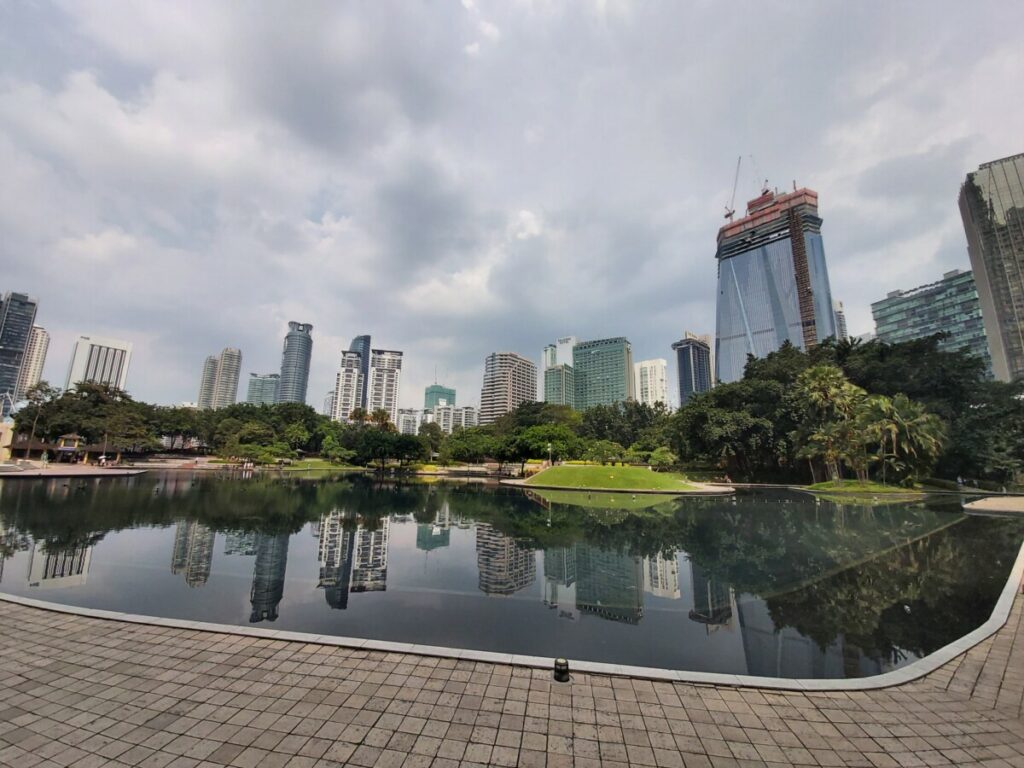 Where the phone really stands out is its Live Focus and live Focus Video mode and while it lacks the new bokeh filters seen on the spanking new Galaxy Note 10 series phones, it still artfully and accurately defocuses the background in a sufficiently realistic fashion while keeping the subject crisp in the foreground. As far as camera quality goes, this is easily the best of the Galaxy A series and can still give a good accounting of itself compared to many other mainline phones from other brands.

Low light show with the primary  camera of the Galaxy A80

The Galaxy A80 comes with a 3,700mAh battery that has 25W fast charging. Even with the power efficient processor, the large size of the display and the motorised camera mechanism draws quite a bit of juice. With moderate use where we kept data or WiFi on all day, an hour worth of phone calls, some gaming and movie watching and heavy use of social media along with extensive use of the camera, the phone barely managed to last by sundown. Fortunately, the fast charging does have it back up and at it with a 50% charge taking about 45 minutes or so and a full charge taking a little over an hour and a half. 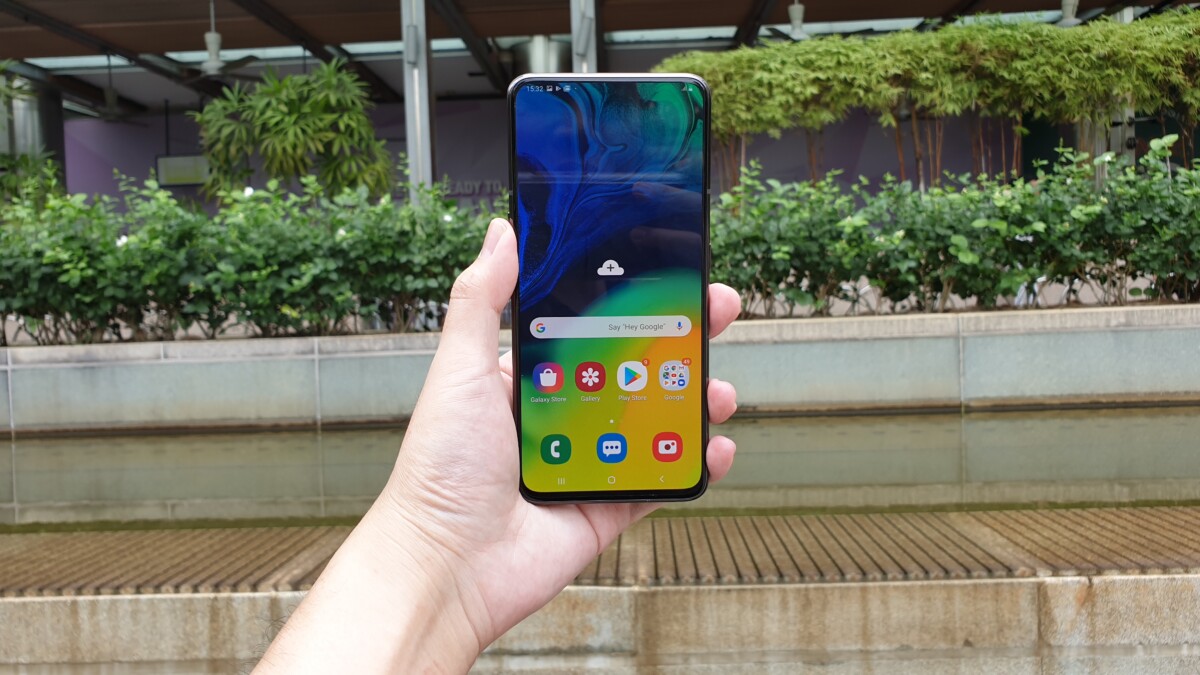 The Galaxy A80 brings to the table a large and vibrant display, decent performance and a novel pop-up camera that offers good performance for a midrange phone though the daunting price tag means that you’re paying a premium for its distinctive design.

What we liked Large and vibrant display, sturdy camera mechanism, great camera shots
What we didn’t Non expandable storage, finish is a fingerprint magnet, very pricey, no 3.5mm audio jack
We say The Samsung Galaxy A80 resolves the challenge of asymmetrical front and rear camera quality with slick engineering. While it does not come cheap, it is indubitably stylish and, above all, lets you take some darned good selfies.