Samsung’s finest midrange phone pips the competition to the post with a beautifully crafted, premium looking chassis and a good front selfie camera as well as an array of once flagship-exclusive extras like a beautifully crisp Infinity display, water resistance and Samsung Pay support.

Samsung’s latest midrange phone the Galaxy A8 (2018) is an interesting example of how they gradually introduce flagship grade hardware from their prized S-series and Note series phones into their more mainstream offerings. 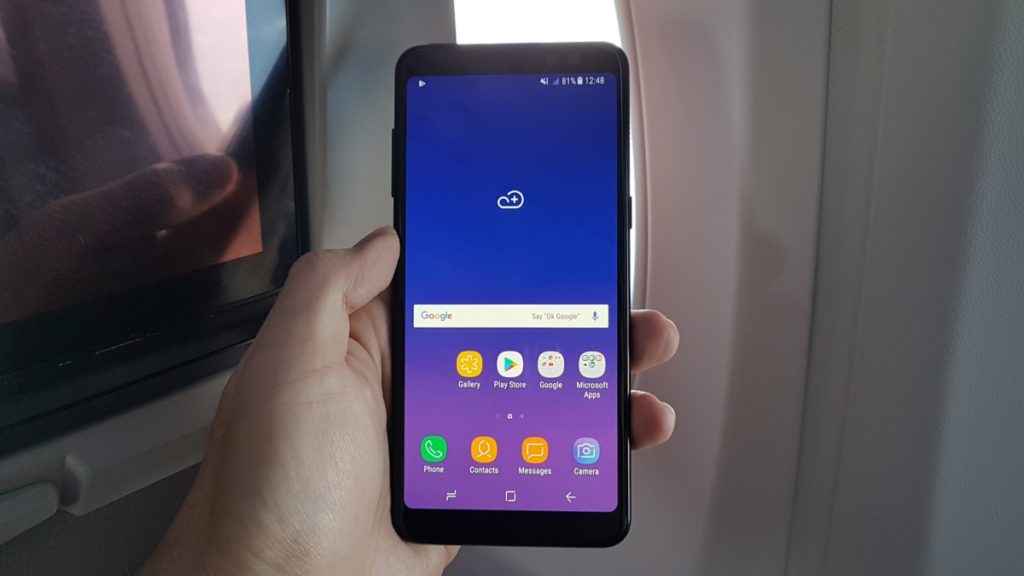 While intended as the successor to last year’s Galaxy A7 (2017), the new Samsung Galaxy A8 (2018) and its slightly larger sized and better specced sibling the Galaxy A8+ (2018) have more in common with the more premium Galaxy S8 in terms of aesthetics and design. Gone is the front facing home button that doubles as a fingerprint reader on the A7.

In the Galaxy A8 (2018), the front of the phone is taken up by a 5.6-inch Full HD+ Super AMOLED Infinity display that stretches across the majority of the top and bottom of the phone with the home button replaced by a virtual one at the base of the display. Once the erstwhile exclusive domain of Samsung’s Galaxy S8, S8+ and Galaxy Note8, this is the first time that their exquisite Infinity Displays have been integrated into a midrange phone. Also new on the A8 is the inclusion of dual front cameras to offer selfies with a bokeh effect. 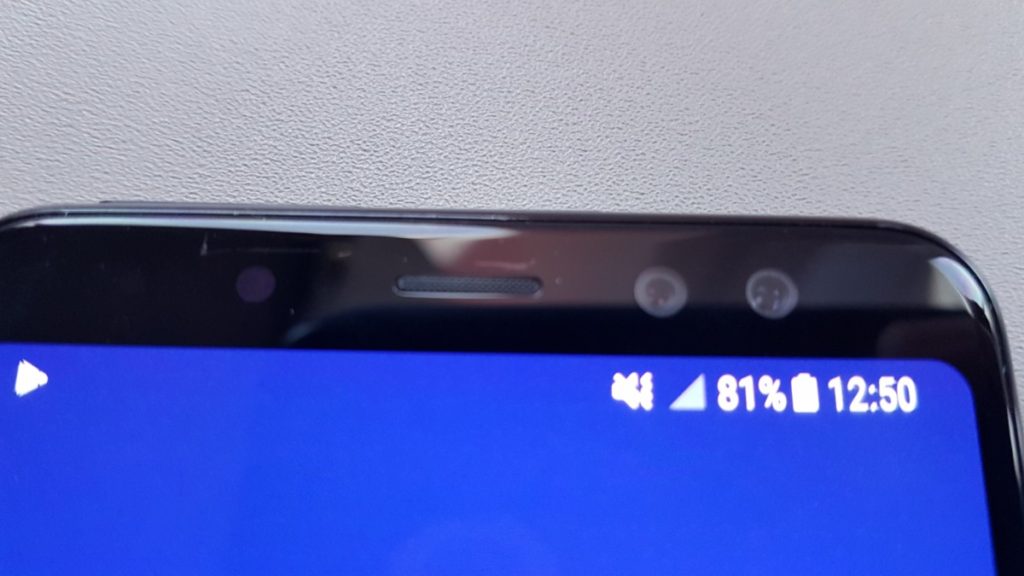 There’s also a subtle array of ergonomic improvements all around. In a surprisingly astute move after listening to consumer feedback, they’ve relocated the fingerprint reader to the bottom of the camera which makes it easier to locate by touch. There are occasional misfires of course with our finger accidentally hitting the camera lens but it’s otherwise a vastly better repositioning of the fingerprint reader over plonking it right next to the camera in the S8. Another design improvement is placing the mono speaker on the side, away from anywhere you’d likely place your fingers to ensure unimpeded sound. The rear camera is also flush with the backplate, ensuring that the camera lens won’t incur any potential scratches in the long term due to getting repeatedly plonked on a surface. 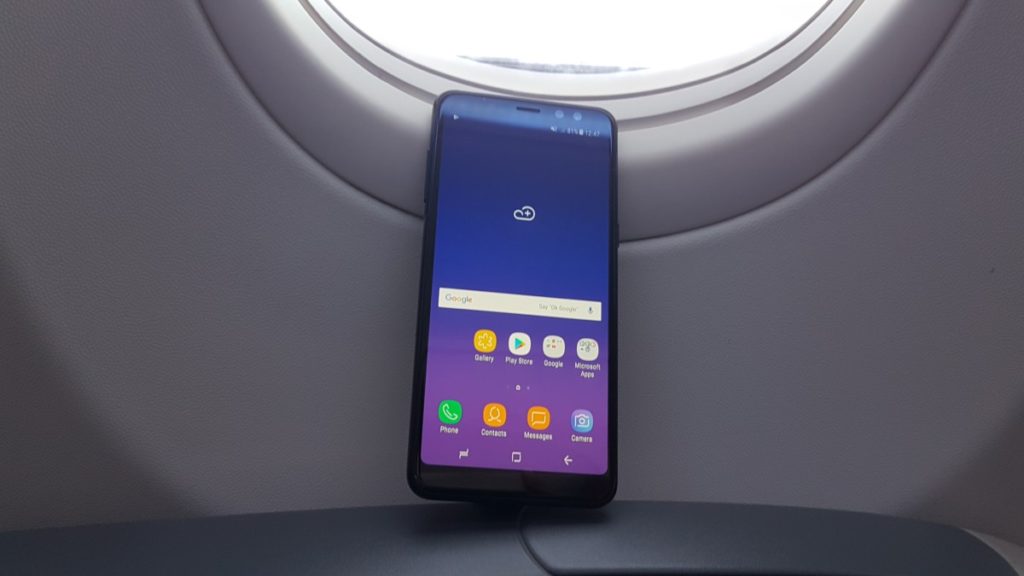 In terms of design, it’s an almost spitting image of the S8 from the front bar the omission of the Bixby button on the side and being slightly heavier and chunkier though it’s still lighter and slimmer than its predecessor the A7 (2017) by a smidgen which places it at a comfortable middle ground. While it feels somewhat hefty at 172g, the compact size of the phone makes it reassuringly easy to use one-handed. 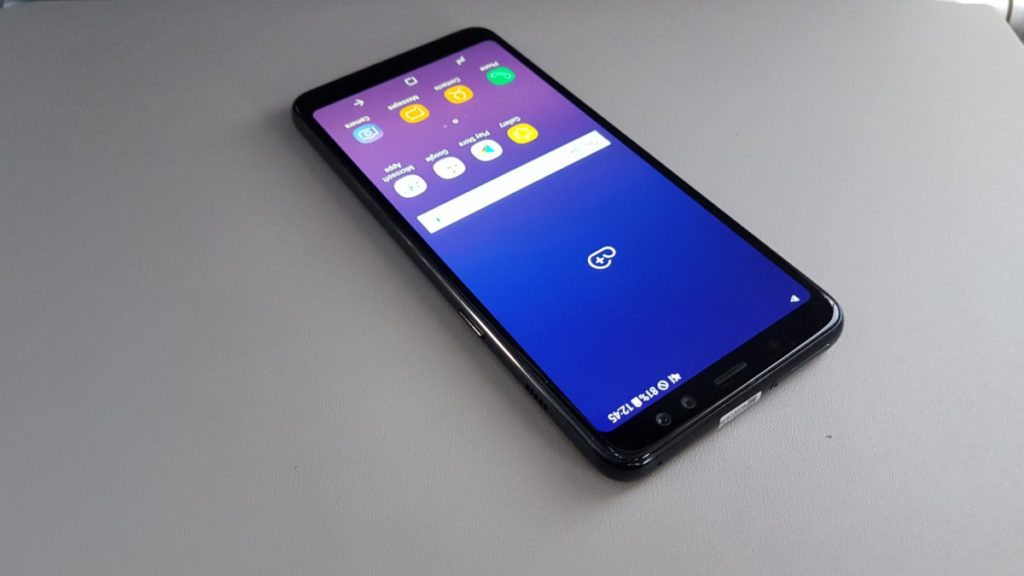 The finish of our test unit came in a mirrored black and looks positively posh though it’s also rather slippery and a fingerprint magnet to boot so you’ll likely need a casing and frequent wipedowns to keep it pristine. A pleasant bonus that gives it the edge over other midrange phones is that the A8 also IP68 water resistant which means you needn’t have to coddle it like a Fabergé egg from the occasional splash or two of water.

The Galaxy A8 (2018) comes with an Exynos 7885 octacore processor based on the 14nm FinFet process that integrates a 1.6GHz hexacore processor and a 2.2GHz dual-core processor along with 4GB RAM and 32GB of expandable storage. Running under the hood of the galaxy A8 is Android Nougat 7.1.1 overlaid by their Grace UX user interface which has seen service on their flagship phones earlier this year.

The 5.6-inch Super AMOLED Infinity display has an 18.5:9 aspect ratio with 2,220 x 1080 pixel resolution and a crisp 441ppi though it’s essentially flat unlike the S8 which has slightly curved edges to facilitate the usage of its curved display for accessing customised shortcuts. 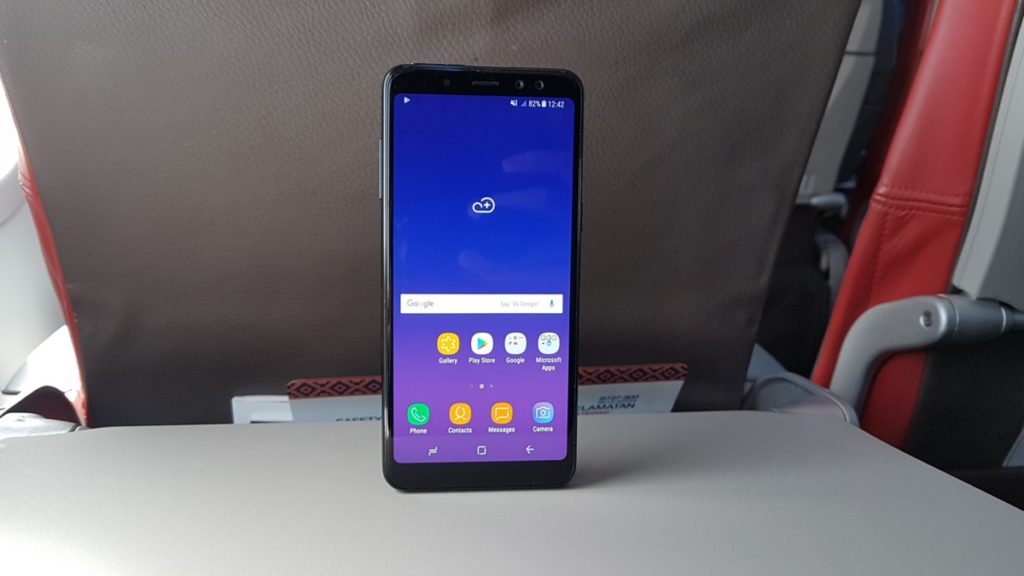 The phone also has the notable bonus of coming with dual SIM card slots and a dedicated microSD card slot that lets you augment the onboard storage with cards up to 256GB in size. Effectively, this allows you to pack two SIM cards and beef up the storage capacity on your phone at the same time, something that even the flagship S8 lacked on account of maxing out with a hybrid SIM card slot.

Getting the phone up and running was relatively straightforward after inputting your Google account. Like the S8, the Grace UX user interface on the Galaxy A8 (2018) is a clean affair with a minimum of bloatware bar the installation of a series of Microsoft Office apps that you can disable later. Notable additions include their Secure Folder function that lets you keep selected content private to the extent that you can even clone apps on it too in a separate, secure partition if you ever feel the need to have two Whatsapp accounts or whatnot.

When put to the test over a period of two weeks, the Galaxy A8 proved to be a very pleasant affair to use. Like the higher end S8, the Samsung A8 (2018) has an always-on display that incurs minimal battery drain and tells you the time plus other notifications without having to turn the whole phone on. Colours onscreen are typical of their vaunted Super AMOLED displays with bright, punchy hues along with excellent contrast.

The screen’s FHD+ resolution ensures crisp text and details even under daylight. At default settings, the Dark Knight Rises offered beautifully deep blacks while Will Smith’s recent magnum opus Bright in HD on Netflix yielded good details and skin tones even in the challenging high contrast scenes. Not all content scales to 18.5:9 aspect ratio though so you’ll likely end up with somewhat of a boxy or letterbox format for a good deal of current films though that will improve as time goes on as more content adopts the wider aspect ratio. 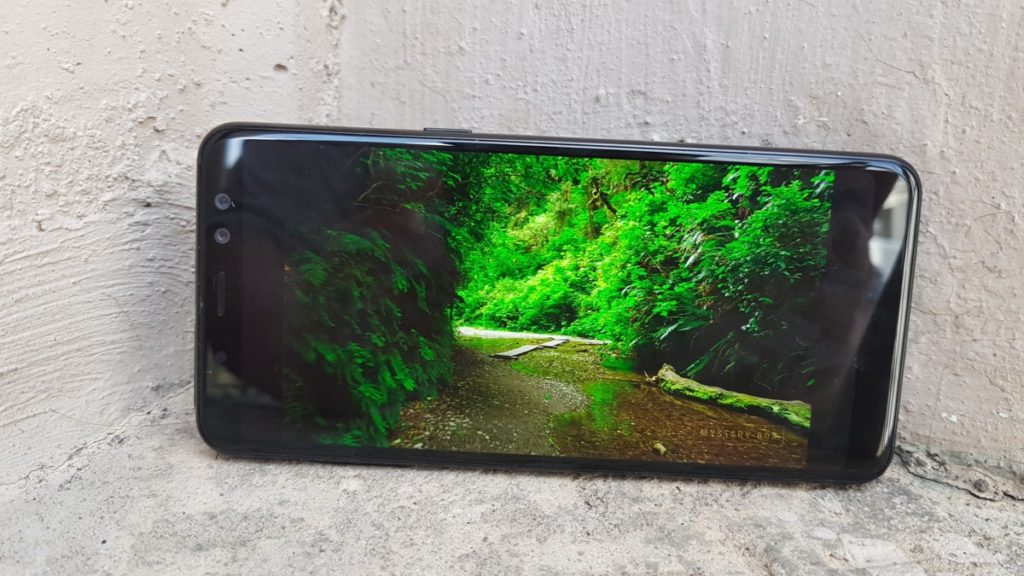 If the Galaxy A8’s displayed colours don’t quite float your boat, you’re able to tweak it via their Display settings to a granular level all the way down to exact Red, Green and Blue colour balancing. Less savvy users can simply opt for the four preset defaults that cover the gamut of usual viewing scenarios.

Synthetic benchmarks were respectable with Geekbench yielding a single core score of 1,524 and a multicore score of 4,409 while Antutu snagged a score of 77,585. In PCMark, the A8 (2018) yielded a score of 5,138. It’s quite a stretch better than its predecessor the A7 though it’s still quite aways short of what an Exynos 8890 in their flagship phones is capable of.

The A8 itself proved to be sufficiently capable of handling most general tasks and while more RAM would be welcome, the phone did not falter in day to day use. Multiple browsers open, Facebook, Youtube and Final Fantasy Awakening were handled without undue complications. Apps were launched in a swift fashion and all but the most resource heavy of them were running in seconds.

Multitasking was also a treat as well with the additional vertical screen real estate proving welcome via the phone’s Split view that lets you open two apps simultaneously so you can browse YouTube while going through your email or Chrome. As the display is flatter than the S8 and is for all intents and purposes an even surface, the A8 lacks the edge notifications of its flagship siblings so you can’t swipe in from the edges to summon app shortcuts or whatnot but it’s a minor quibble at best. For its intended midrange category, the A8 (2018) is a very capable workhorse.

The Galaxy A8 (2018) has a rather interesting rear and front camera setup. The rear has a 16-MP camera with a bright F/1.7 aperture and PDAF though it lacks optical image stabilisation. In keeping with its A-series design, the camera user interface has been simplified from their flagship phones. Most casual users likely won’t notice much though power users who take advantage of manual mode will notice a dearth of options. On top of Auto mode, users can choose from a Hyperlapse mode, a Night mode, a Food mode and a Panorama mode. The aforementioned Pro mode only lets you modify exposure settings, ISO and white balance and aught else. Rather than having it directly on the camera UI, you’ll also have to fiddle about in the settings to enable or disable HDR though it’s best if you leave it on Auto mode.

The front dual camera is a first for Samsung for taking selfies. It pairs a 16-MP and 8-MP camera together, both with F/1.9 aperture to enable a ‘Live Focus’ mode that lets you dial the depth of bokeh when you’re taking selfies. The front camera lacks a dedicated flash but instead flashes the display white temporarily as an ersatz flash. It also has a beauty mode that lets you dial skin smoothness, the size of your eyes and how slim your face is on demand. In field tests, the Live Focus effect was convincing with good separation of the subject and the background though it works best under daylight conditions; it tends to falter or not work at all in low-light settings.

The rear camera proved astonishingly capable in both daylight and low-light conditions and getting shareworthy shots is a doddle. The lack of optical image stabilisation means that you’ll need a steady hand when undertaking low light shots though that’s not an insurmountable task. Accessing the cameras is a swift affair as you double pressing the power button acts as a camera shortcut. 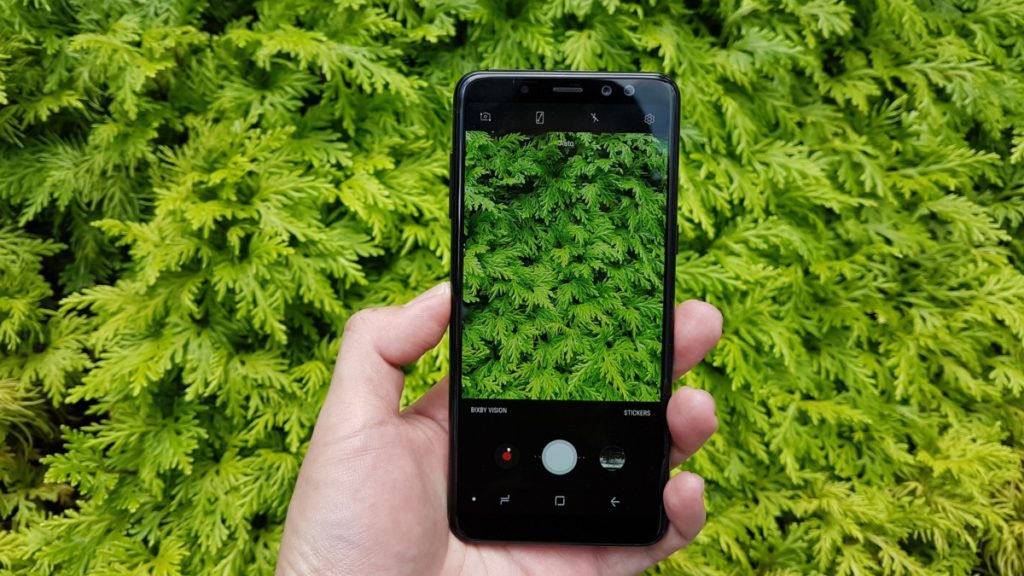 The front selfie camera was on par with the best of them with good detail and pleasing skin tones though you can modify it to taste.  The Samsung A8’s beauty mode also helps improve even the most aesthetically challenged mugs into something decent. You’re also able to wave your hand to activate the selfie camera rather than press a button which comes in handy. Click the following shots in the gallery below to admire the full sized version.

On the imaging front, the Samsung A8 (2018) punches above its weight class and is astonishingly competent with decent front and rear cameras that will capably tackle most general scenarios from your usual selfies, wefies all the way to food, scenery and group shots.

The Samsung Galaxy A8 (2018) comes with an integrated 3,000mAh battery powered by a USB Type C port at the base of the phone that supports fast charging. Unfortunately, our test sample was not supplied with a fast charger so we weren’t able to field test that aspect of the phone though battery life as a whole was above average with a day’s worth of usage easily achievable with modest use. 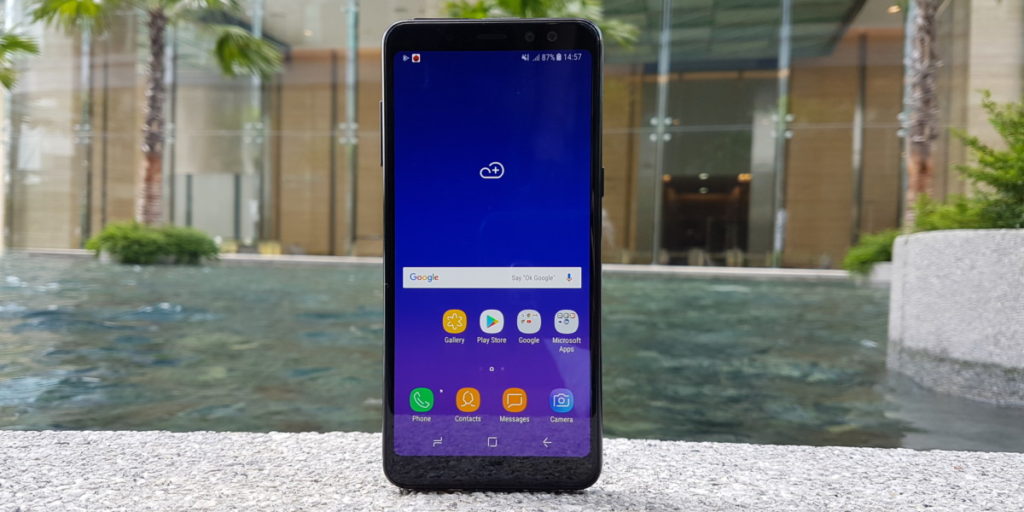 The price tag of the Galaxy A8 (2018) wasn’t indicated ahead of its launch though it is pegged as a premium midrange phone so it will likely clock in at under RM2K mark and possibly be about par with last year’s Galaxy A7 (2017) which, in its prime, cost RM1,899.

Price aside, there’s a lot to love with the Galaxy A8. A beautifully made chassis, a crisp Infinity Display combined with decent hardware along with a good rear and front dual camera array make it a winner as far as midrange phones go. The Galaxy A8 already has all the makings of a winning midrange phone. All it needs now is the right price tag to go with it. 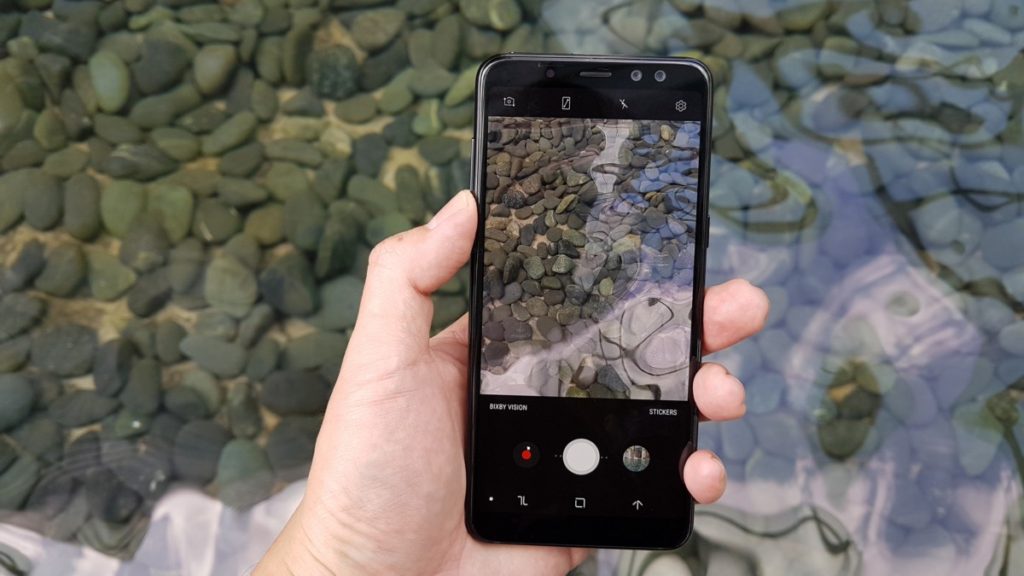 What we liked Excellent build quality, IP68 water resistance, Samsung pay support, great front selfie cameras, triple card slot
What we didn’t Simplified camera UI, finish is a fingerprint magnet, more RAM would be nice
We say Samsung’s finest midrange phone pips the competition to the post with a beautifully crafted, premium looking chassis and a good front selfie camera as well as an array of once flagship-exclusive extras like a beautifully crisp Infinity display, water resistance and Samsung Pay.