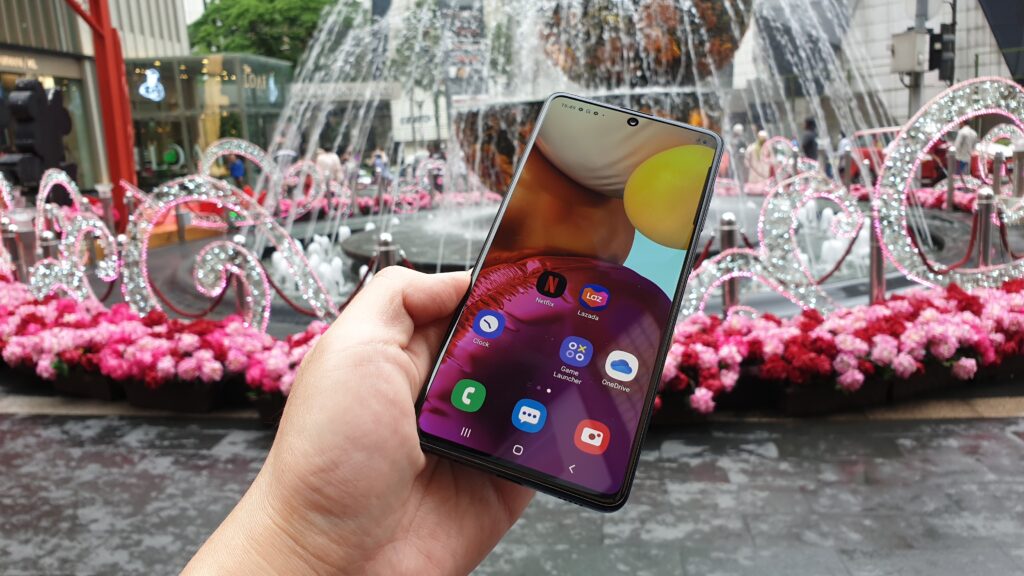 Riding a media blitz spearheaded by the eponymous BLACKPINK K-pop quartet who’ve crafted a terrifyingly catchy jingle that’s hit almost every major social media platform from YouTube to TikTok, Samsung’s latest additions to their midrange line-up the Galaxy A51 and Galaxy A71 aim to offer as they happily mentioned in the song – awesome screen, awesome camera and awesome battery life. 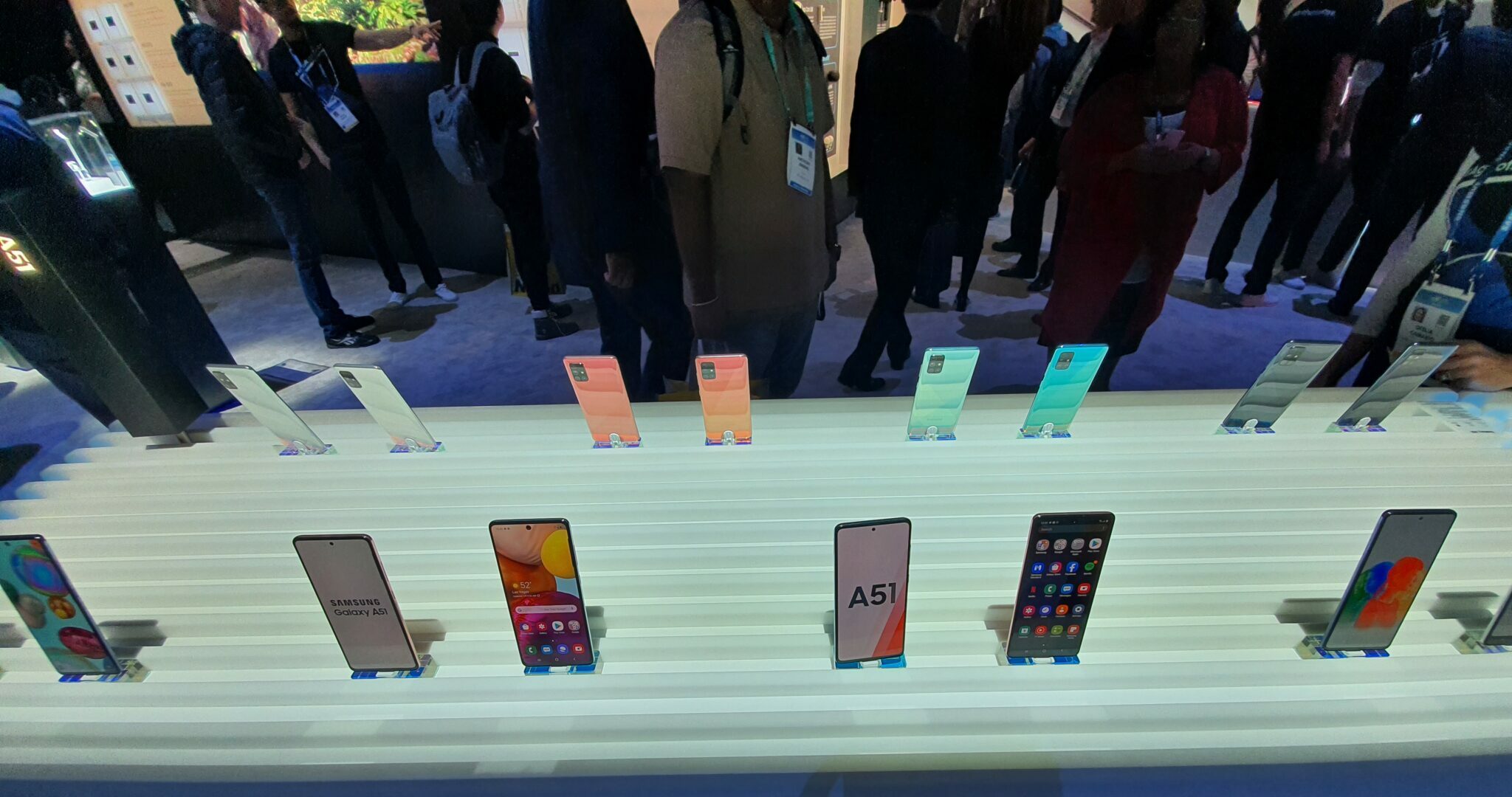 The Samsung Galaxy A51 and Galaxy A71 made an appearance at CES 2020 alongside a host of Samsung’s other offerings.

We got our hands on an early retail unit of the Samsung Galaxy A71 and put it through its paces. Here’s our initial thoughts and how it fares under actual use.

What’s a Galaxy A series phone about then?

Not everyone needs a sports car and most need a reliable workhorse that can take them to work and back, which is where Samsung’s Galaxy A series phones come into the picture as they aim to offer exceptional bang for the buck.

Previously, Samsung had a variety of different budget models including a J-series though they’ve all been amalgamated under one Galaxy A banner. This is where the new Galaxy A51 and Galaxy A71 fall into with more affordable prices and hardware as well as tech culled from their flagship Galaxy S series like last year’s Galaxy S10 and their premium phablet Galaxy Note series. 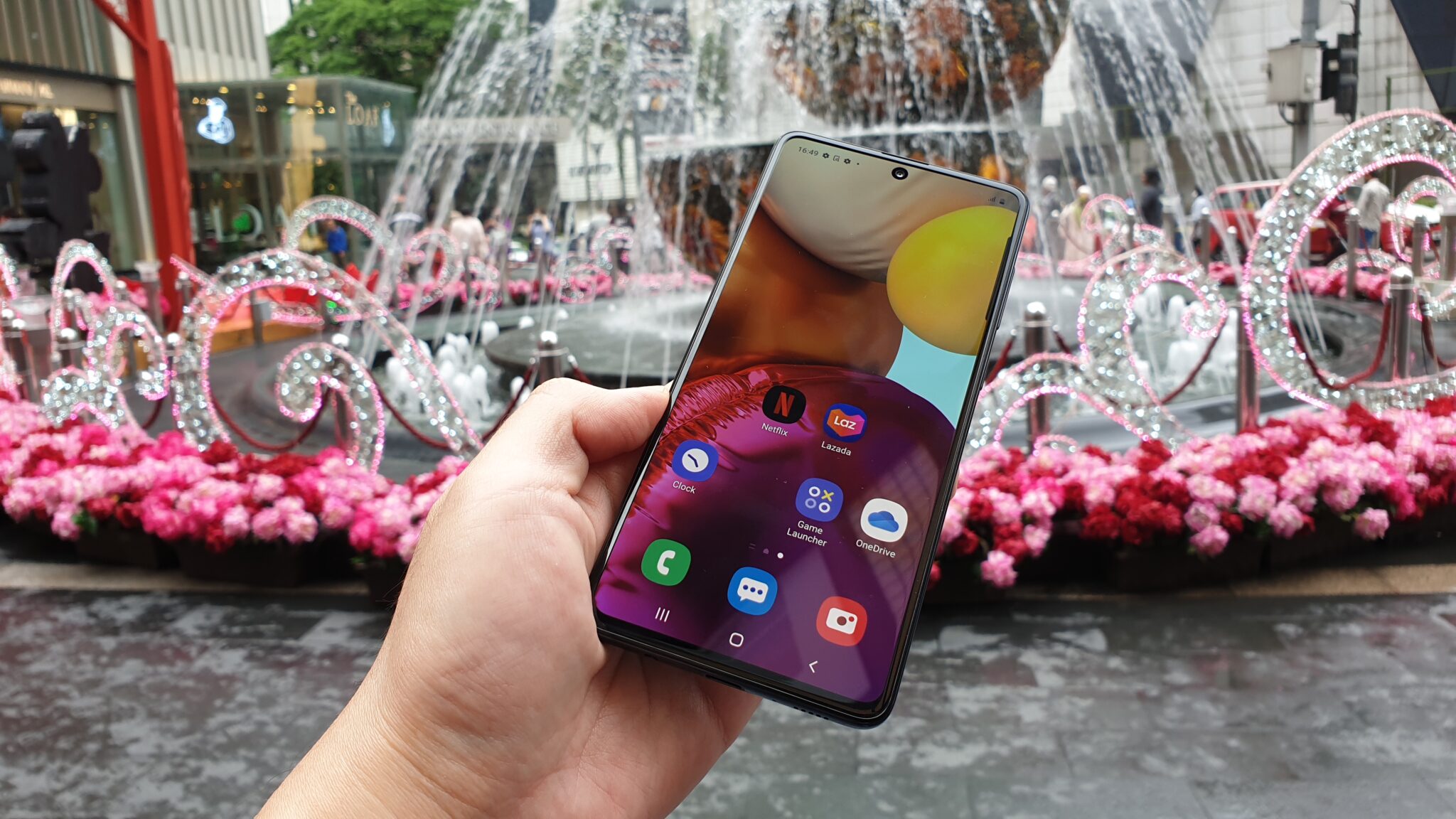 Intended as the larger sibling of the Galaxy A51, the Galaxy A71 has a similar silhouette and camera placement but differs on other essentials including a different processor, different camera sensors and a larger battery but has a similar 32-MP selfie camera. We took a look at both phones earlier this month at CES 2020 and you can refresh your memory with our prior feature here.

Externally, the Galaxy A71 is a pretty darned big phone on account of its large 6.7-inch Full HD+ Super AMOLED Plus Infinity-O display though it’s also remarkably slim at 7.7mm which facilitates one-handed use.

The punchhole in the top of the display hosts a 32-MP selfie camera which is similar to that seen on the Galaxy A51 while the lower quadrant of the display has an under-glass fingerprint reader to retain the large screen-to-body ratio. Just above the selfie camera is a tiny grille for the phone mic. 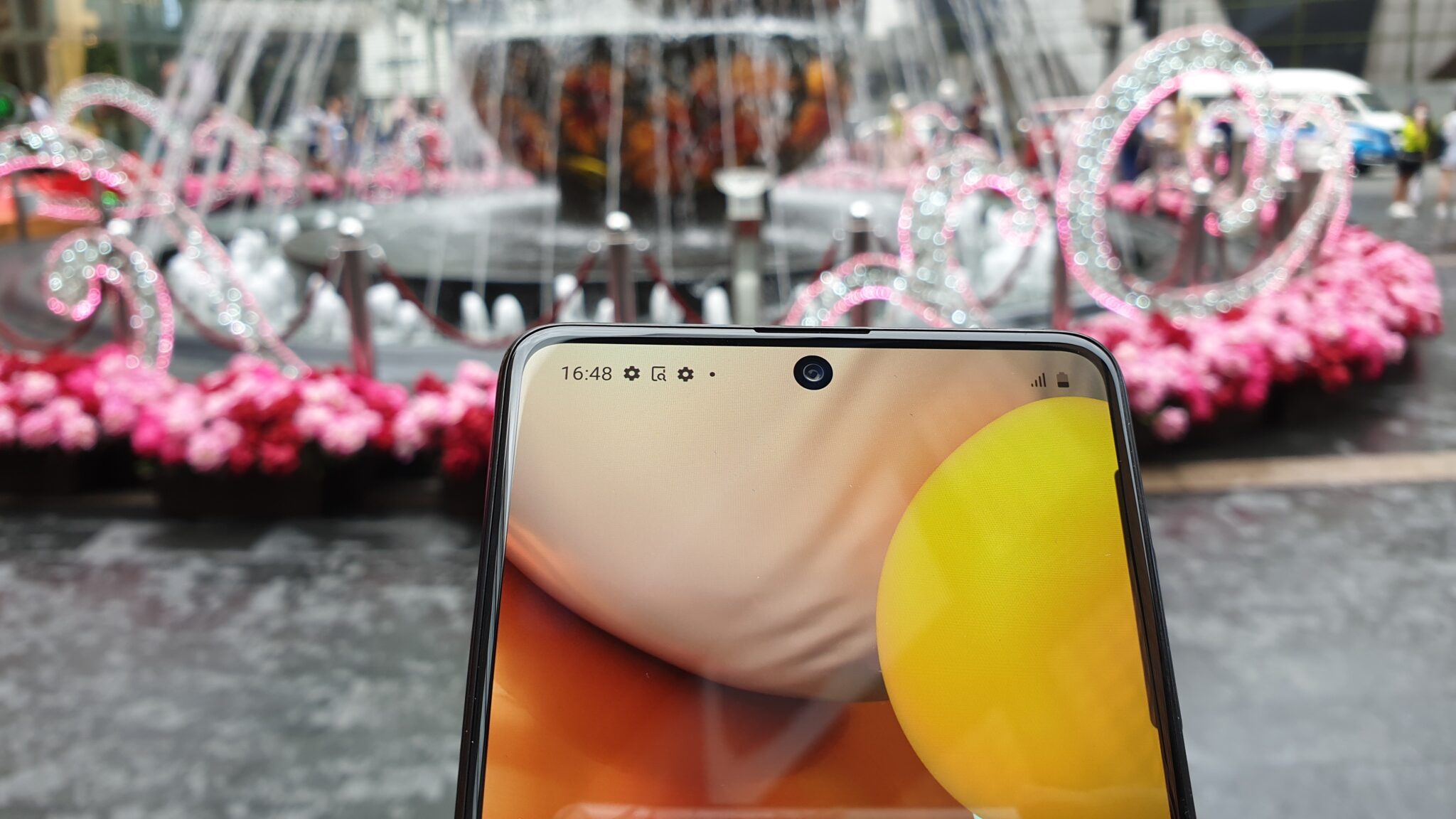 The backplate is primarily made of polycarbonate with a mirrored sheen and the main camera array emplaced in the upper left corner. The finish is incredibly slippery so some care is needed when holding it lest it slip out of your hands at an inopportune moment. The shiny finish is also a fingerprint magnet which makes it a chore to keep clean.

In Malaysia, the Galaxy A71 comes in three different colours – Prism Crush Silver, Prism Crush Blue and in the case of our test unit, Prism Crush Black. We saw a red variant at CES 2020 but it’s not available in Malaysia at launch. It could possibly appear later on but it’s uncertain at this point in time. 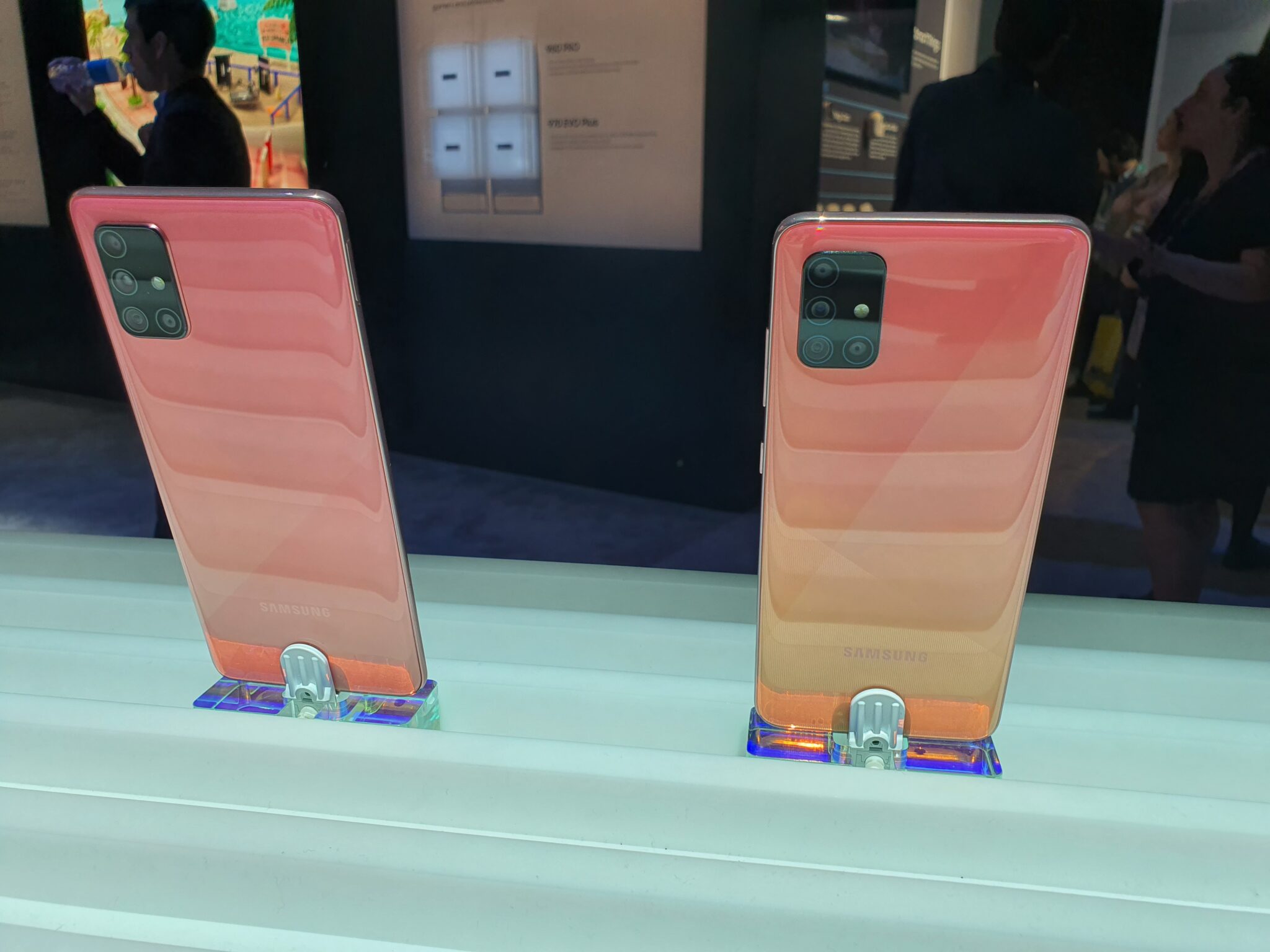 It also sports a limited selection of features seen on last year’s Galaxy S10 camera user interface in the form of Live Focus mode though without the ability to create different defocusing effects. 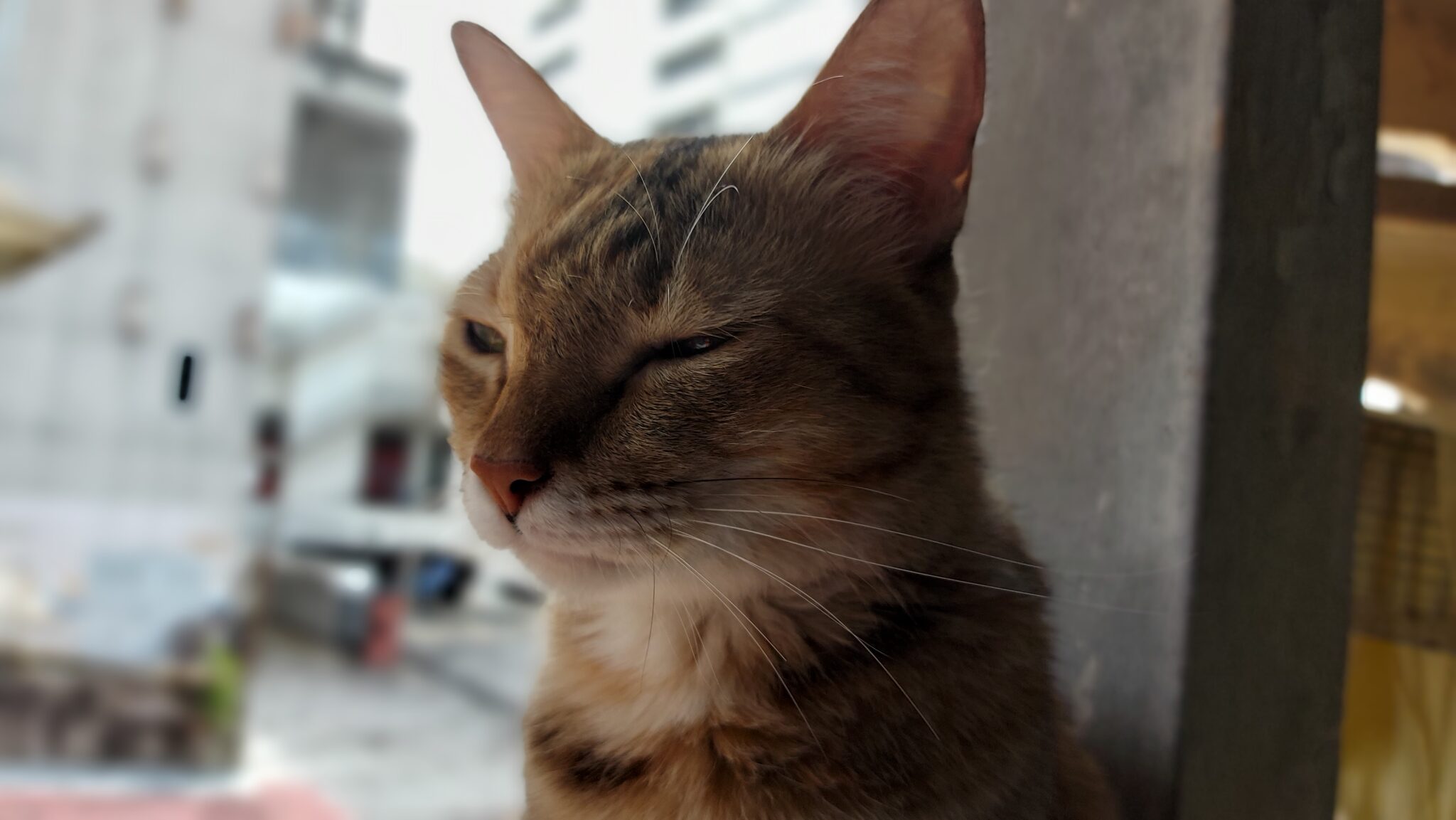 Yes – I am judging you hooman. Captured with Live Focus mode 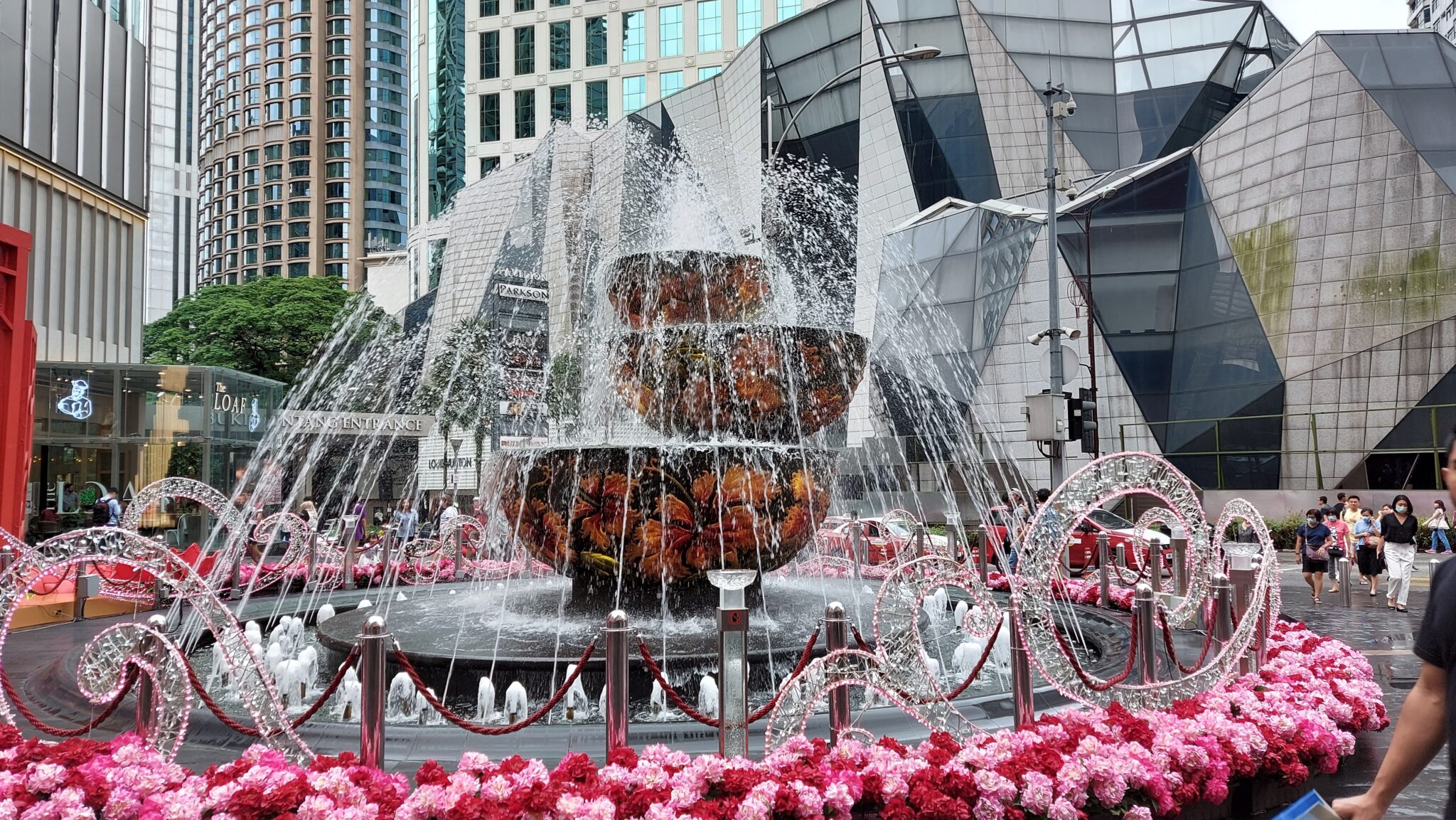 Captured with the primary camera of the Galaxy A71 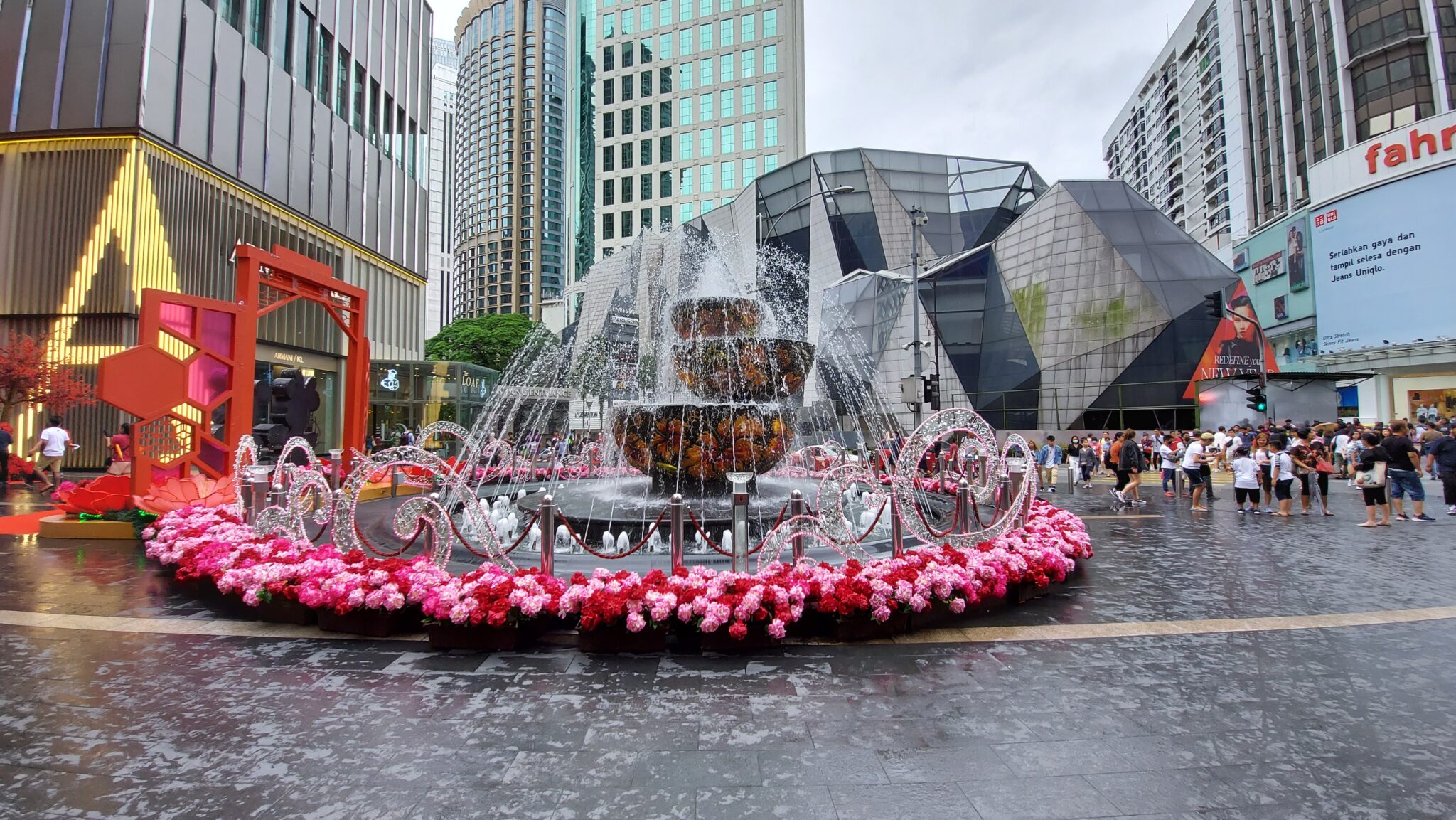 Ultra wide angle mode for the Galaxy A71

The left side of the phone comes with a triple card slot (2 nano SIM cards + 1 microSD card) while the base has a 3.5mm audio jack, a USB Type-C port with 25W fast charging for the provided 4,500mAh battery and a grille for the mono speaker.

The right of the phone sports a volume rocker and a power button just below it. While they feel responsive and sturdy, they have a plasticky feel to it but that’s not a deal breaker at this price point. The top of the phone is otherwise bare.

Overall build quality is agreeable for the price and the phone hits all the high points of contemporary design with minimal bezels on the front display, along with a slim and grippable chassis that has the buttons in the right places within easy reach. 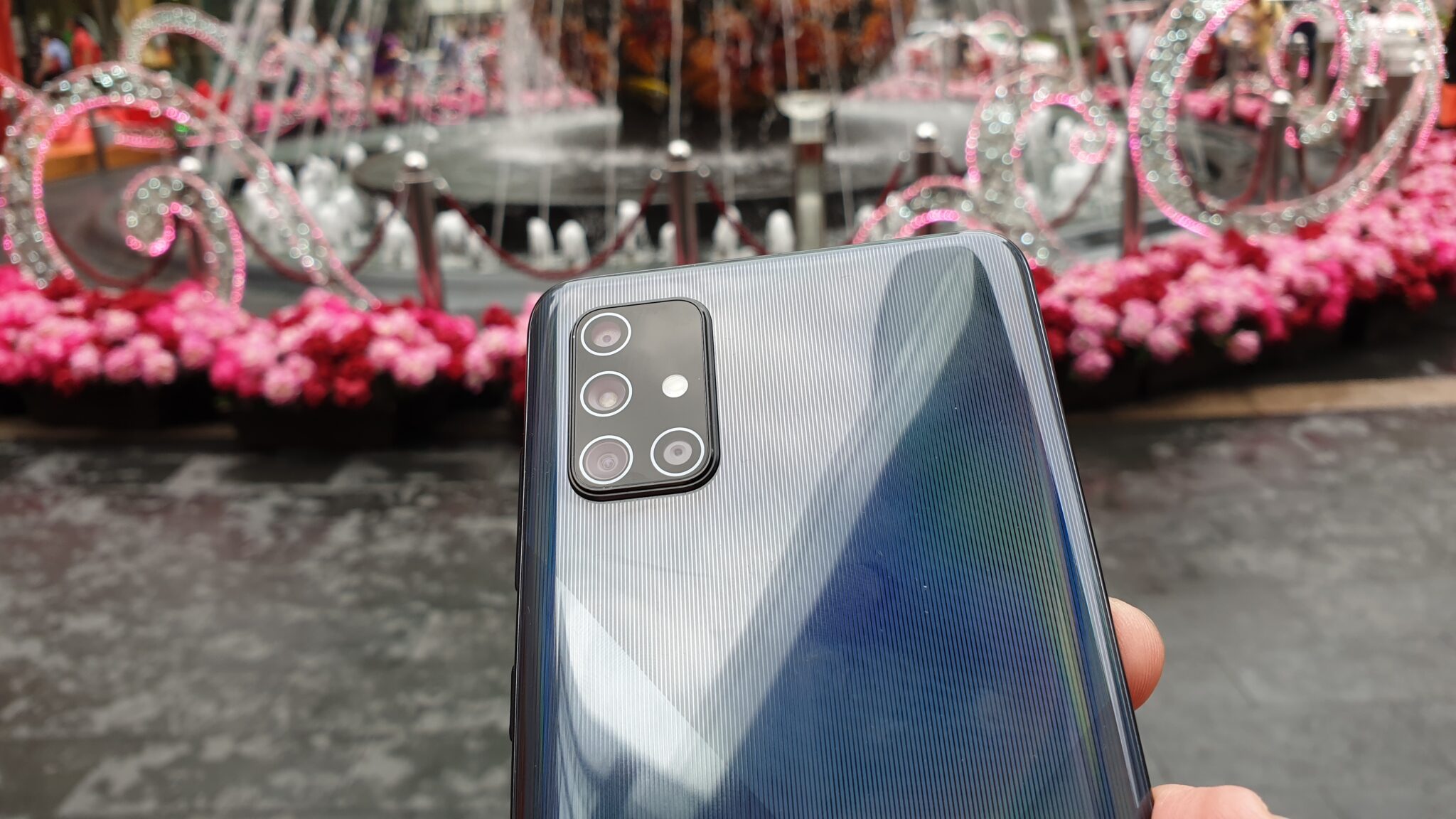 The addition of a triple card slot and a 3.5mm audio jack are compelling additions that differentiate it from its flagship cousins. Unfortunately, the chassis lacks any water resistance unlike its pricier siblings so some care needs to be taken to avoid all the usual water-based hazards like rain, heavy sweat and the like.

In terms of specifications, the Galaxy A71 runs Android 10 on a Snapdragon 730 octacore processor that’s built on an 8nm process which first saw service in phones in early 2019.

Astute readers will likely recall it was used in the Galaxy A80. Complementing this is 8GB RAM and 128GB of expandable storage. It’s a pretty solid setup for a workhorse and in terms of pixel crunching capabilities, it can take on other midrange offerings toe to toe. 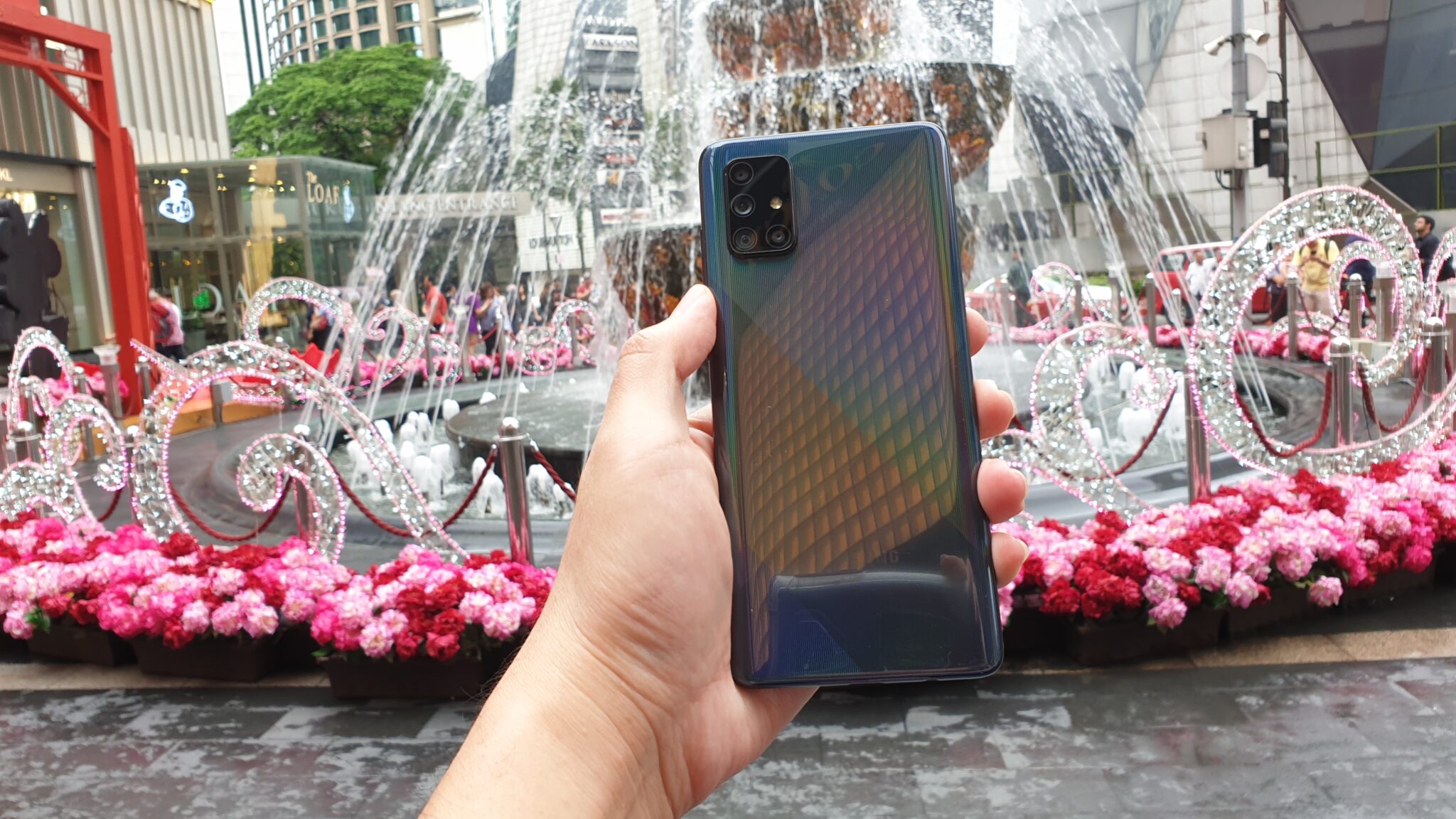 Our test unit lacked the box and any other accessories that would typically come with it so we can’t comment on how much extra value you get but for its intended asking price at about under RM2,000, the Galaxy A71 is a good looking midranger indeed.

Stay tuned for our full-on review that’s coming soon! In the meantime you can get a look at Samsung’s official product listing of the Galaxy A71 though it has no price as yet at the time we went to print.  You can see it here.