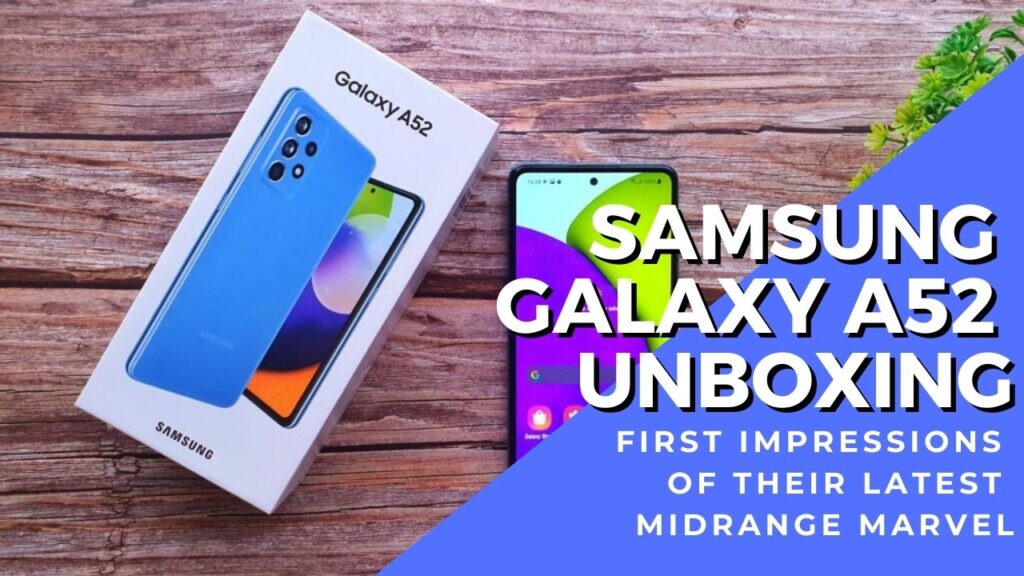 Samsung Malaysia has released not one but four new Galaxy A series phones in the market with two of them, the Galaxy A52 and Galaxy A72 unveiled at the global Galaxy Awesome Unpacked 2021 live stream.

We got our hands on a review unit of the Galaxy A52 in Awesome Blue. In our Samsung Galaxy A52 unboxing experience, you get to see what’s in the box as we detail our first impressions of their latest midrange marvel to see if it’s really worth the money. 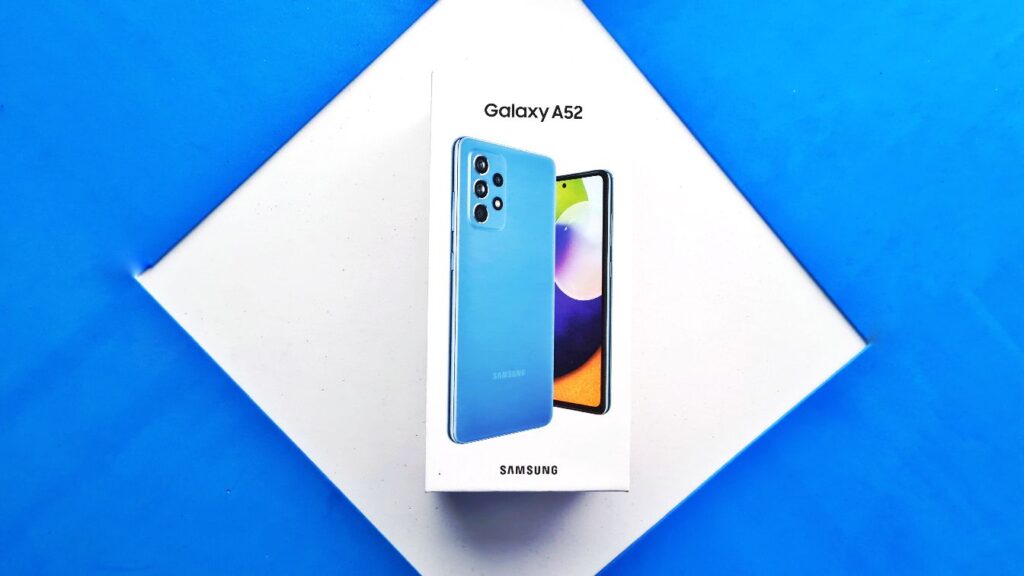 In Malaysia, the Galaxy A52 comes with 8GB RAM and 256GB of storage along with your choice of four colourways – Awesome Blue which our test unit came in, Awesome Black, Awesome White and Awesome Violet.

Other regions may have different storage capacities and there is a Galaxy A52 5G but for now, Malaysia only has one storage configuration of the A52 in four different colours. 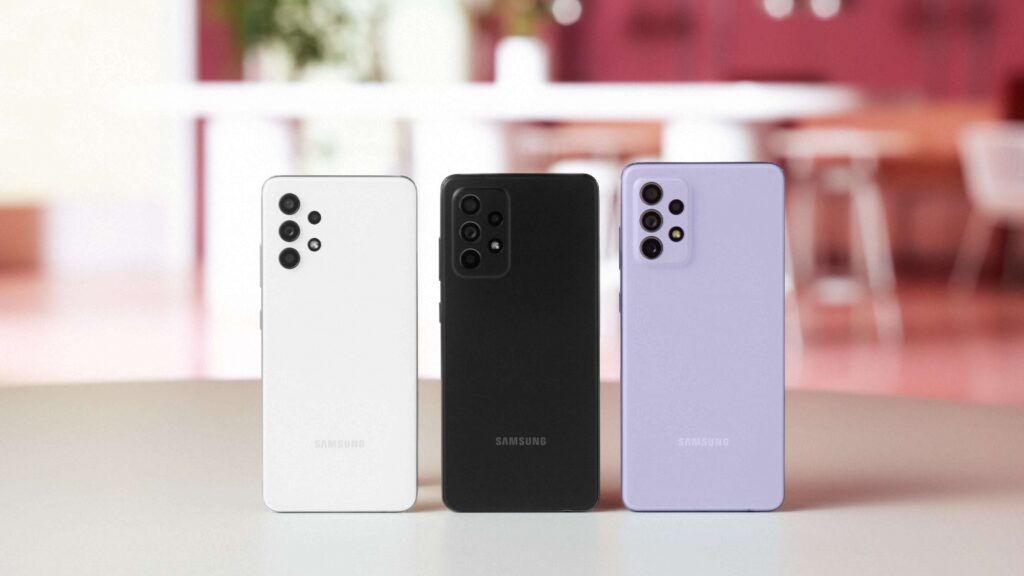 Samsung Galaxy A52 Unboxing – What’s in the Box

Externally, the box comes in somewhat modest packaging that’s surprisingly thicker and chunkier than the boxes that the Galaxy S21 series come in and for good reason as it comes with a slew of extra kit. 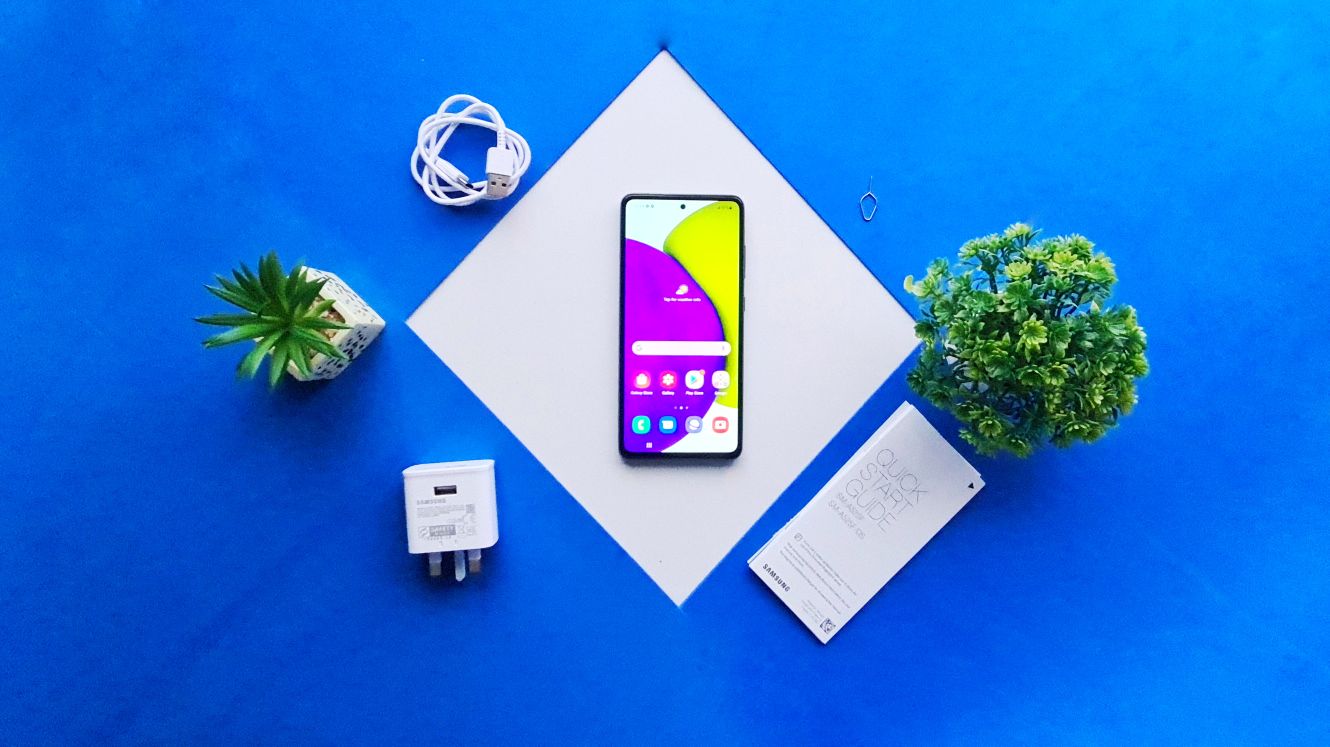 Slide the box open and you get the phone itself wrapped in a plastic sleeve, a short USB-A to USB-C cable, a 15W UK-style 3-pin wall charger, the SIM eject pin and the usual paperwork with a warranty and quick start manual. 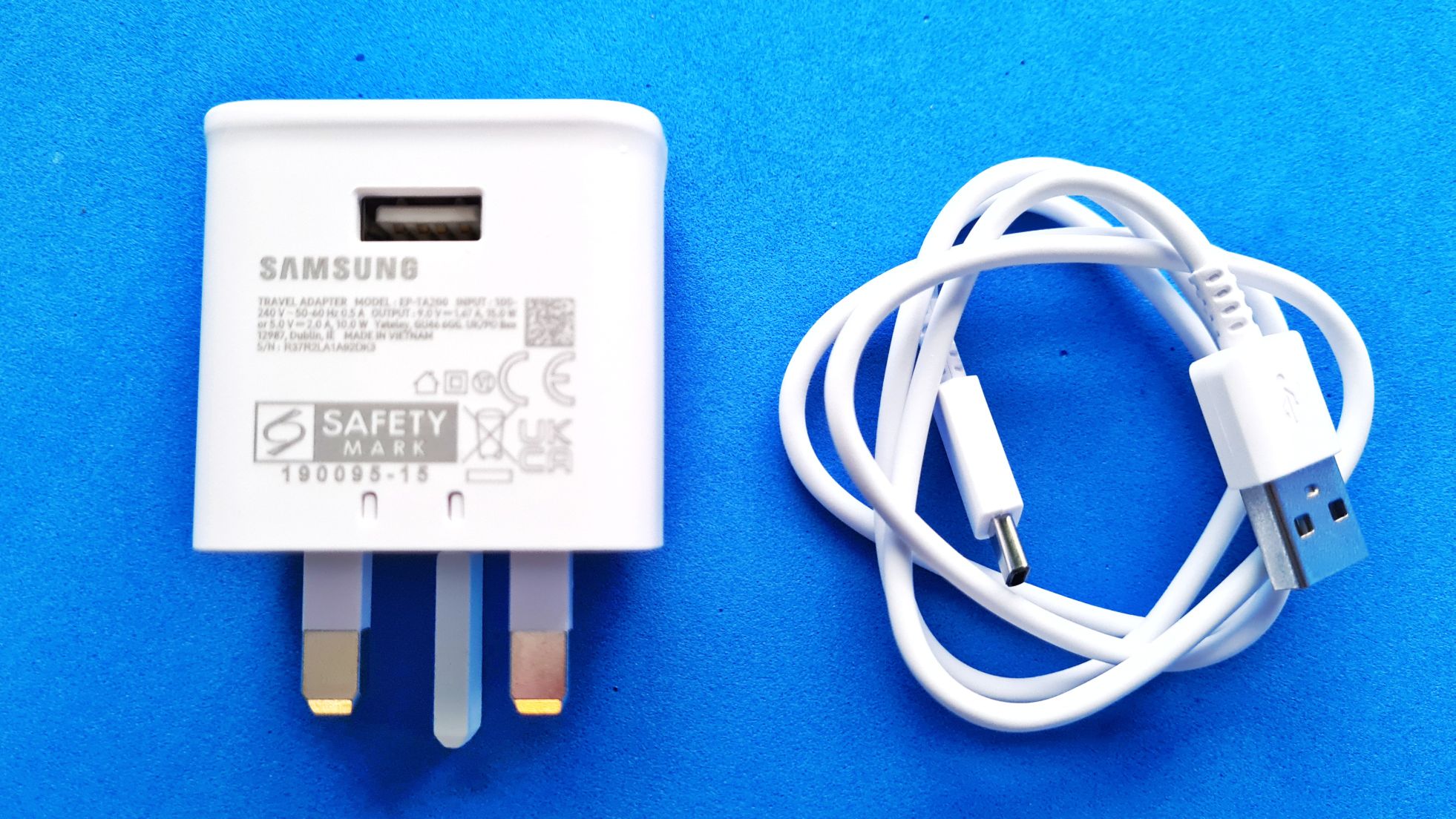 Some of the traditional midrange goodies like a bundled soft silicone cover or headphones have been ditched this time around which is a bit of a downer but if you hustle and preorder the Galaxy A52, Samsung is throwing in a free standing cover that’s worth RM109 and which lets you prop it up for Netflix watching duties .

Intended as a midrange offering as opposed to the ultra-premium Galaxy S21, the Galaxy A52 is unlike any other mid-range phone in the market for the fact that it is also the most full-featured with among the best hardware possible while keeping within its price range.

The fait accompli here is just how much performance and features that Samsung has managed to shove into the Galaxy A52.

Externally, the Galaxy A52 does have somewhat of a heft to it on account of the large 4,500mAh battery crammed into its 8.4mm thin chassis but this does lend it a rather premium feel.

The majority of the chassis including the side trim and backplate are all made from polycarbonate which shaves some weight off and which also adds to its modest durability against drops and dents.

Our review unit came in a shade of Awesome Blue and it’s remarkably striking indeed with a matte, robin’s egg blue that resists fingerprints nicely while offering a level of tactility to ensure that it doesn’t slip out from your fingers.

The chassis is also rated for IP67 dust and water resistance, meaning it can survive unscathed in up to a meter of fresh water for up to 30 minutes. 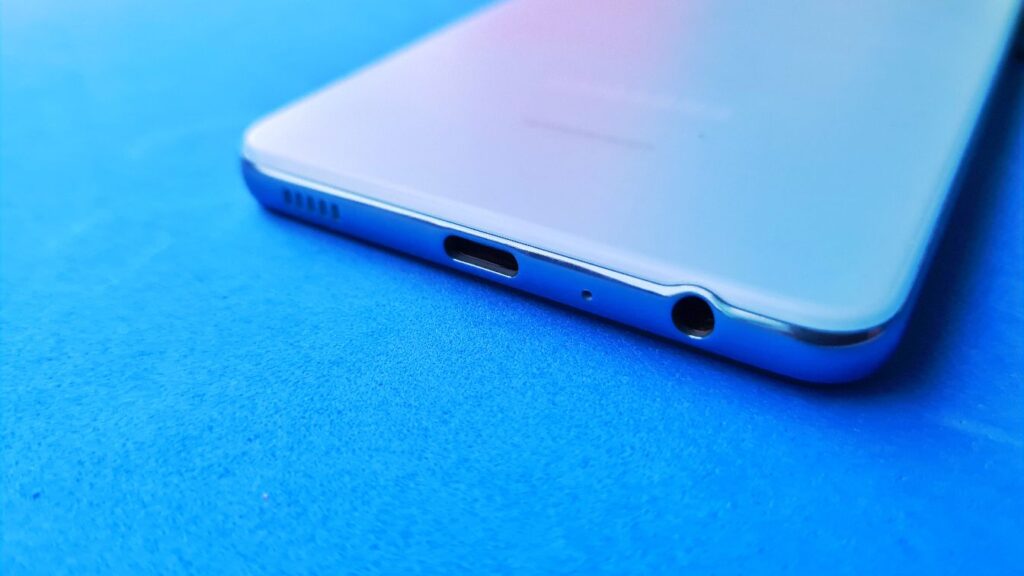 The backplate itself hosts a slightly raised camera housing in the customary upper left position along with a subtle Samsung logo on the lower third of the phone but is otherwise tastefully bare. 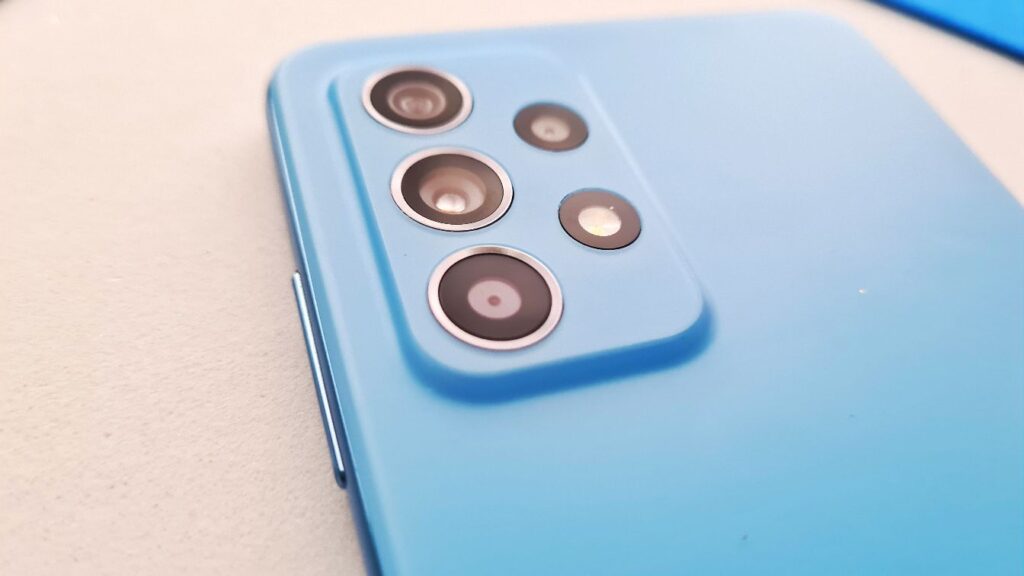 Up top, the Galaxy A52 hosts one of the few things that even the Galaxy S21 lacks – a triple card slot so that you can slot in two SIM cards and a microSD card up to 1TB in size to augment the onboard 256GB storage.

If you’re a memory hog that needs to cram in a season’s worth of dramas, comics and books on your phone, a microSD card tray is a life saver. 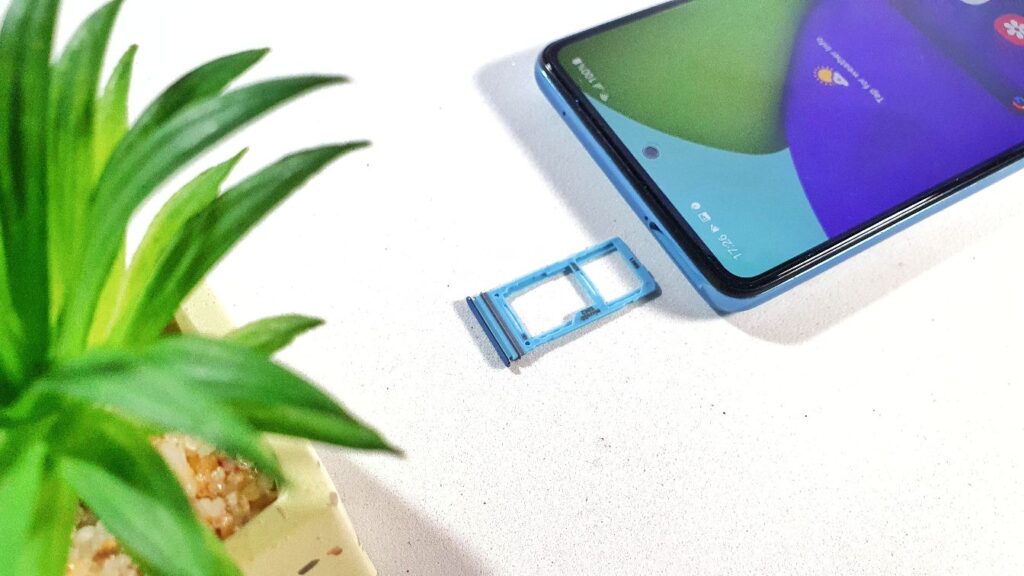 The left of the phone is otherwise bare but the right hosts a power button and volume rocker. Located on the base of the phone is a USB-C port for charging and another feature that has disappeared on flagship phones – a 3.5mm audio jack. The base also has a grille for one of a matching set of stereo speakers for the Galaxy A52. 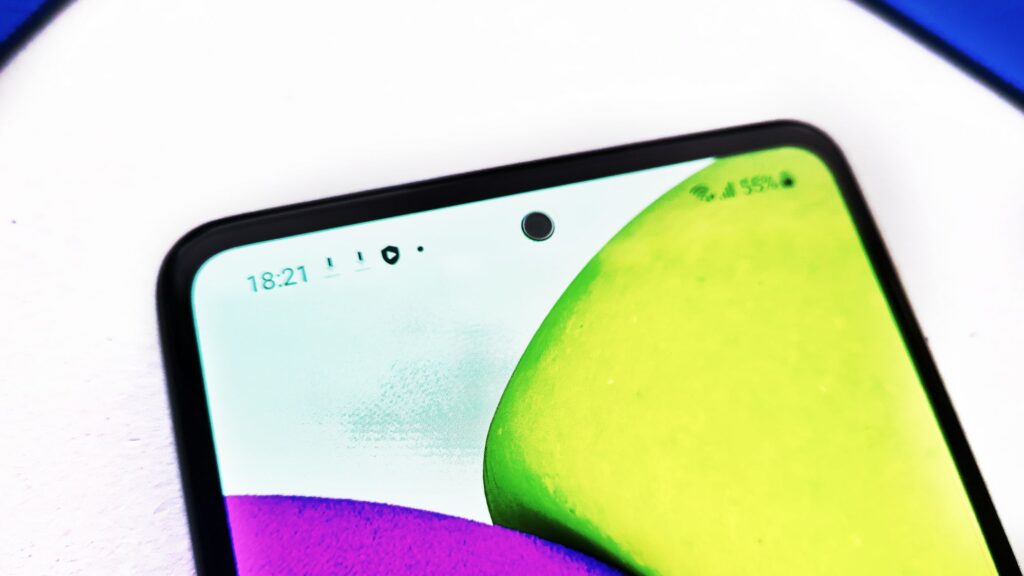 Up front, you have the main draw to the phone – a 6.5-inch Full HD+ Super AMOLED display with a 90Hz refresh rate that ensures silky smooth animations when scrolling, gaming or otherwise getting about the phone.

There’s a tiny grille at the top for the second of a matching pair of stereo speakers as well as a tiny punch hole for the front-facing 32MP fixed focus camera. 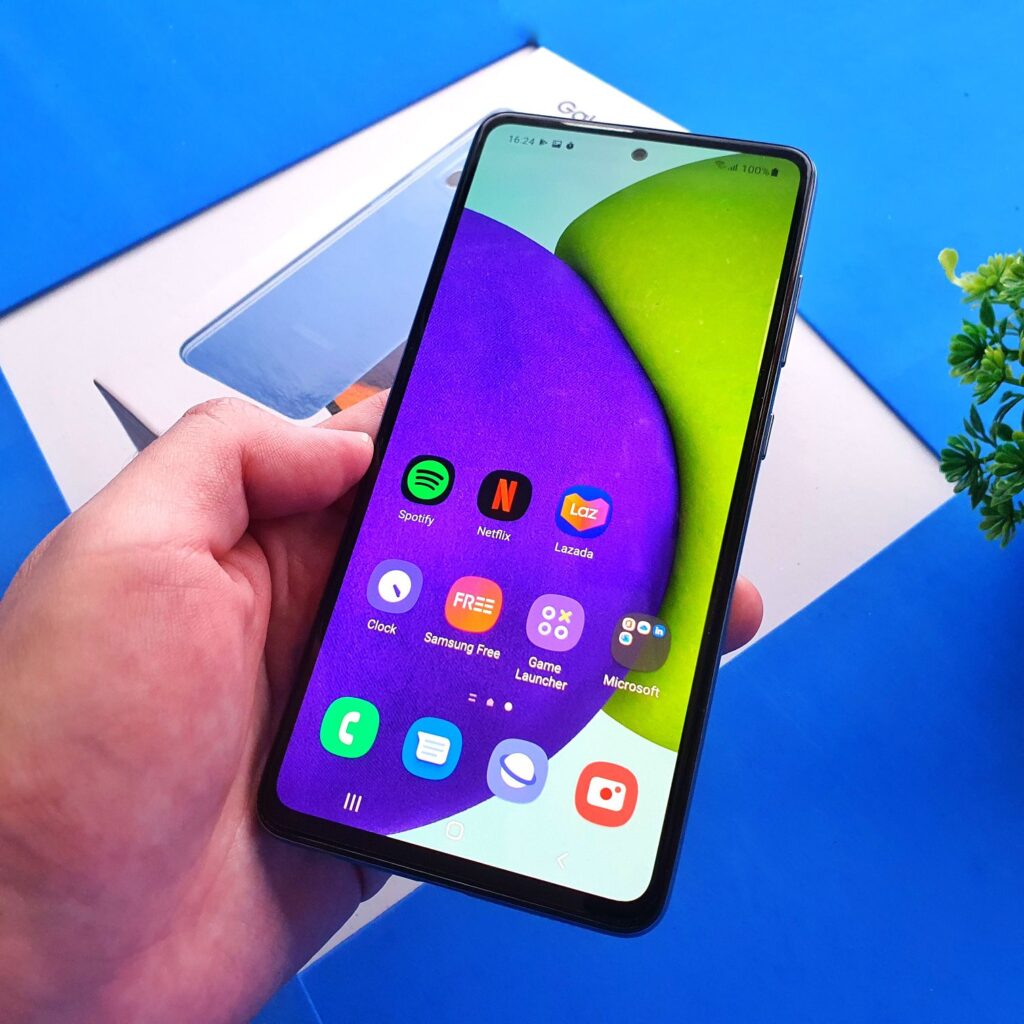 Samsung hasn’t skimped on the cameras either and the Galaxy’s rear quad camera array consists of a primary 64MP F/1.8 camera with optical image stabilisation.

The vast majority of other phones currently in this price range in the market don’t have OIS and primarily rely on AI and electronic image stabilisation to produce a judder free shot or video.

This is backed up by a 12MP F/2.2 ultra wide angle camera, a 5MP depth camera and a fourth 5MP macro camera. Combined, this rear quad camera setup is able to capture up to 4K UHD@30fps video and stabilised 1080P@60fps

Under the hood, the Galaxy A52 comes with a Snapdragon 720G processor, 8GB RAM and 256GB of expandable storage via the aforementioned microSD card slot.

That’s already a pretty solid setup as phones in its price range go. Perhaps the only downside here that we discovered in our Samsung Galaxy A52 unboxing is that the phone lacks 5G connectivity but that’s a minor quibble seeing what else it has.

Charging it is via the provided 15W charger though it’s actually capable of 25W fast charging for its 4,500mAh battery. Other niceties seen in the Galaxy S21 series like reverse wireless charging and wireless charging are omitted here but that’s not a biggie at this price range.

So far, the Galaxy A52 already has a ton of features that enable it to punch way above it’s mid range weight class. You’re getting in a phone that costs RM1,499 a 90Hz Super AMOLED display, stereo speakers, a 3.5mm audio jack, a triple card tray and a water resistant chassis. And that’s just getting started.

Overall, the Galaxy A52 would have been considered a flagship phone if you went back in time a couple of years but be that as it may be in 2021, this is one of the most impressive mid range phones we’ve seen and not just for the hardware it packs. 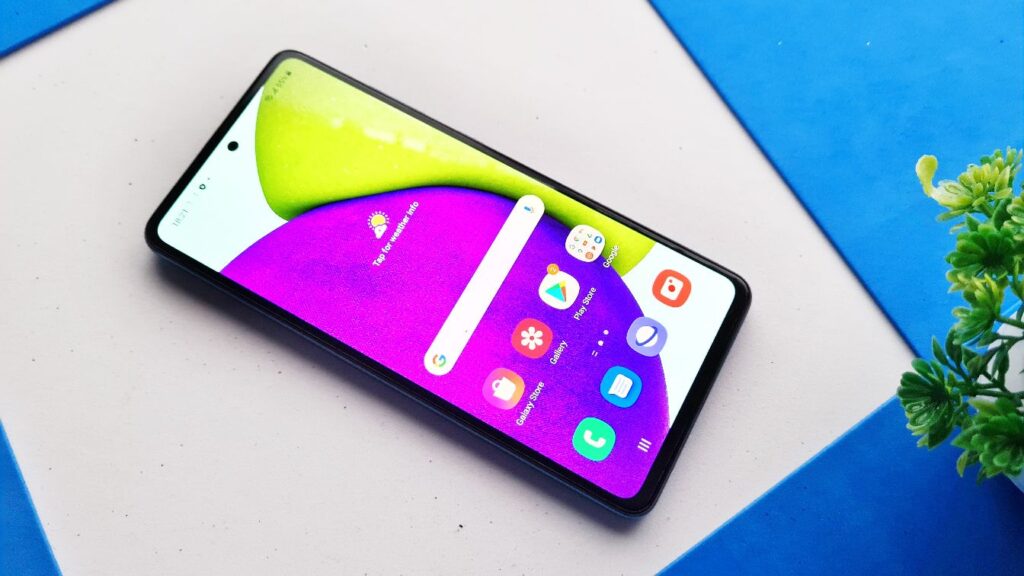 Even accommodating for the modest concessions to keep it under the RM,1500 price tag like an all-plastic chassis and no 5G, the Galaxy A52 has a surprising amount of polish that already sets it apart from its peers. Stay tuned for our full review!

In the meantime, the Samsung Galaxy A52 is available nationwide in Malaysia at all authorised retailers, Samsung Experience stores and their online store from this 26th of March onwards. Check them out at: https://bit.ly/3fatn0P