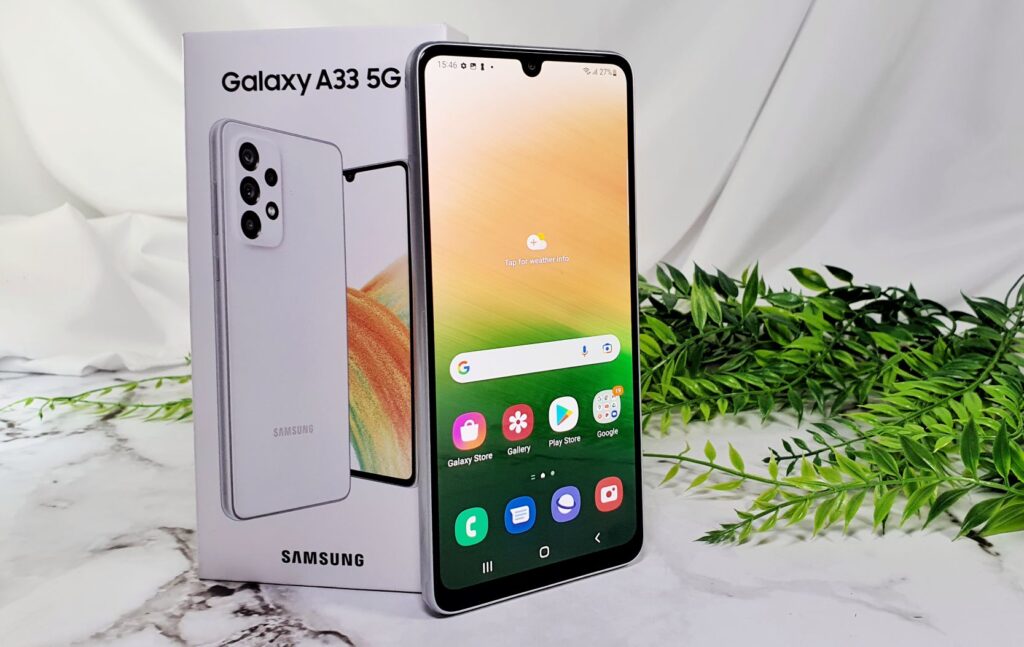 Samsung is best known for their flagship phones like their Galaxy S22 series and Galaxy Tab S8 series but they’ve been carving out a name for themselves with their workhorse Galaxy A range for 2022 and their latest Galaxy A33 5G is the smallest and most affordable out of new trio of phones alongside the larger Galaxy A53 and Galaxy A73 5G. All three models have 5G connectivity but for the sake of brevity, we’ll nix the suffix throughout this narrative. 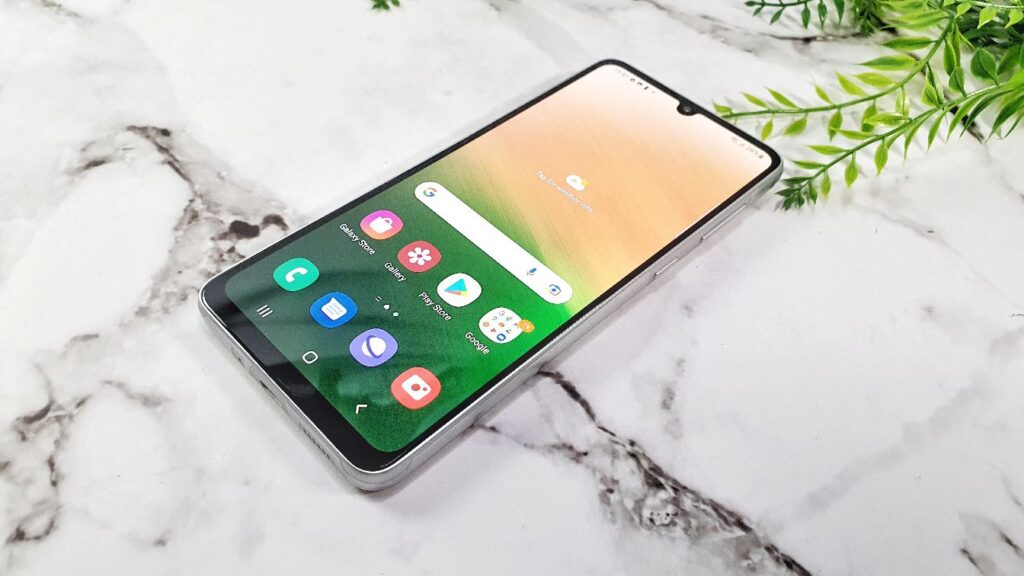 We’ve managed to get a sample for field testing and here’s our Galaxy A33 first look and unboxing where we see what’s in the box and our first impressions.

Samsung Galaxy A33 First Look – What’s in the Box

Out of the box, the Galaxy A33 follows the general trend towards minimalistic packaging and the box contains the phone itself, a SIM eject pin, the usual warranty and quick start literature and a USB-C charging cable. Unfortunately, they’ve ditched the charger this time around but the general operating premise here is that someone will most likely already own one. 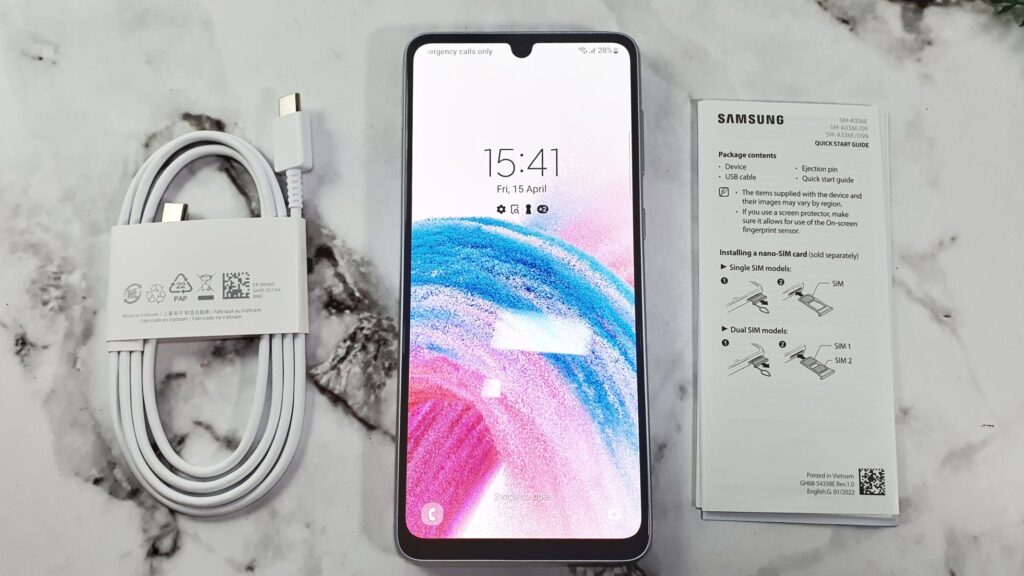 Launched in the recent Galaxy A 2022 launch earlier in March alongside the Goldilocks sized Galaxy A53 5G and the larger Galaxy A73 5G, the compact Galaxy A33 has surprisingly large dimensions and a decent array of hardware for its size.

Seeing its intended price point as an affordable sub RM1,500 phone, it’s understandable that a few concessions are made for cost with the biggest one being that the phone is primarily made of polycarbonate on its sides and rear.

The rear backplate is available in your choice of four colours with the Galaxy A33 first look sample coming in Awesome White. For Malaysia, you can also acquire the phone in Awesome Black, Awesome Blue and Awesome Peach colourways.

Aesthetically speaking, it mimics the Galaxy S22 line-up with a triple camera array perched in the upper left corner of the phone but rather than the Contour Cut design which uses a different material and a raised housing from the rear of the phone, the Galaxy A33 moulds the camera housing and the backplate itself as one complete piece with the seams flowing smoothly into the backplate. 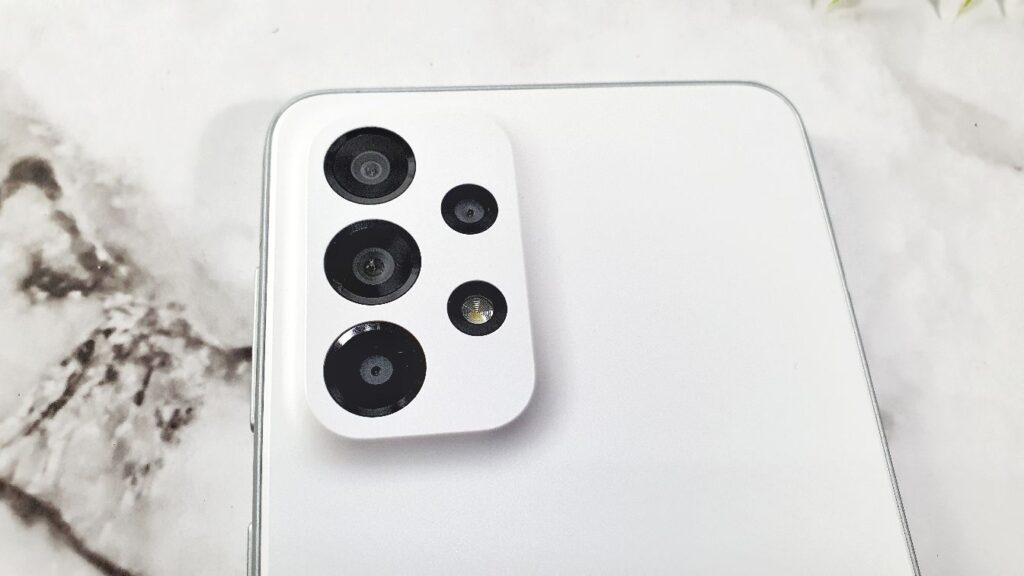 The case itself has a matte finish which repels fingerprints nicely and save for a subtle Samsung logo emblazoned in grey on the lower quadrant, the phone maintains a clean design which is attractive in its own way.

The sides of the phone are also made of polycarbonate but trimmed in a silver paint job though the nature of the materials used in its construction are immediately obvious even at a casual glance. The right side has a power button and volume rocker while the top hosts a hybrid SIM card tray which allows it – surprise – to add a microSD card up to 1TB in size to augment the onboard storage. This is a pleasant bonus, especially seeing as the larger Galaxy S22 series flagships don’t have this feature. 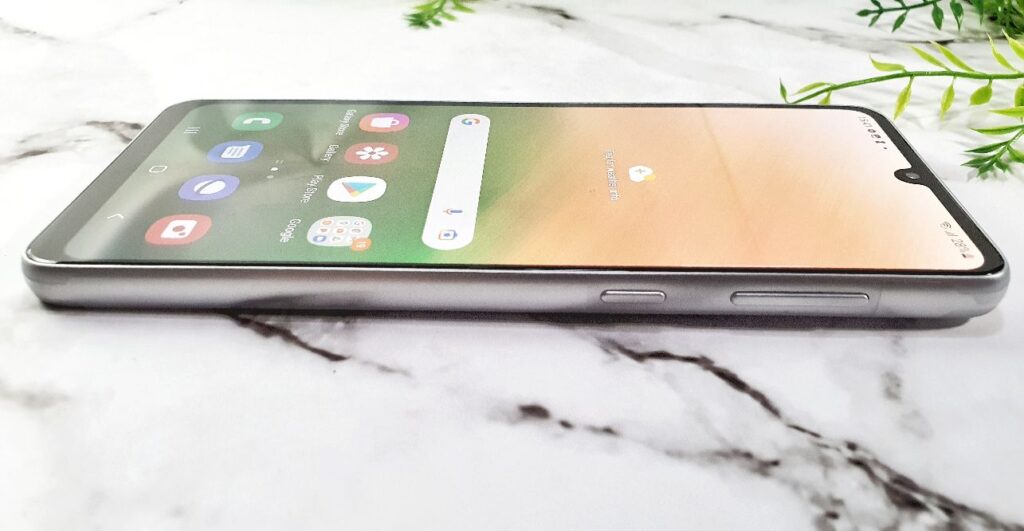 The base hosts a speaker grille as well as a USB-C port for charging and docking duties. Unfortunately, the Galaxy A33 lacks a 3.5mm jack this time around which means that you’ll need to invest in a pair of wireless earbuds if you’re looking to listen to music or watch movies in private but seeing how affordable they are, this isn’t as big an issue as it was a couple of years back.

Up front, our Galaxy A33 first look sample sports a vibrant 6.4-inch Super AMOLED display that has FHD+ resolution and a 90Hz refresh rate with a U-shaped cutout for the front-facing 13MP selfie camera. A tiny slit near the top also acts as an earpiece and also for the stereo speaker setup for the phone with its companion speaker in the base of the phone. 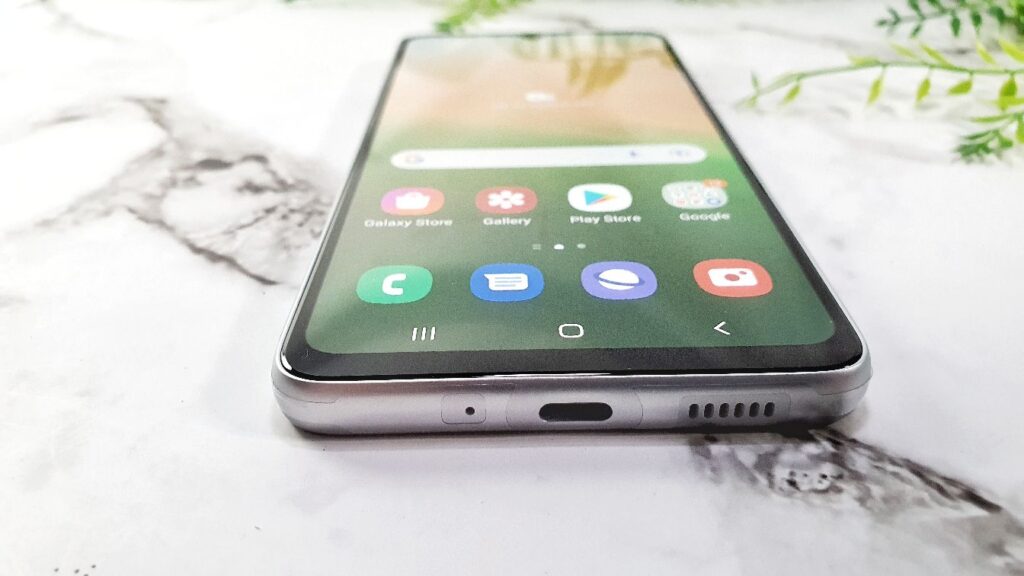 While the side and top bezels are quite thin, the bottom bezel is a bit on the thicker side reminiscent of a chin of sorts. The bottom quadrant hosts a fingerprint reader or biometrics. As a pleasant bonus, Samsung has sheathed the Galaxy A33’s display with Corning Gorilla Glass 5 which adds a measure of resistance to nicks and scratches.

Bar the somewhat plasticky backplate and buttons, the Galaxy A33 has a pleasant heft and weight that’s compact enough to use one-handed. Build quality is sturdy and the phone also has IP67 dust and water resistance which isn’t something common in its price range.

Samsung Galaxy A33 First Look – Specifications at a Glance

Even at a casual glance, the Galaxy A33 has a veritable checklist of features that easily outgun entry-level and put quite a few midrange phones from the competition to shame.

You get a 6.4-inch Super AMOLED display with a fast 90Hz refresh rate, a new Exynos 1280 processor built on a 5nm process that’s officially 28% faster than its predecessor in the A32, 5G connectivity, a generous 8GB RAM with 128GB of storage and most importantly, expandable storage via a microSD card slot.

Rather than running Android one or two versions behind, our Galaxy A33 first look sample has the latest Android 12 overlaid with their newest OneUI 4.1 user interface straight out of the box. The phone also benefits from Samsung’s generous 4-years of OS update and 5 years of security updates too which adds significantly to its longevity. 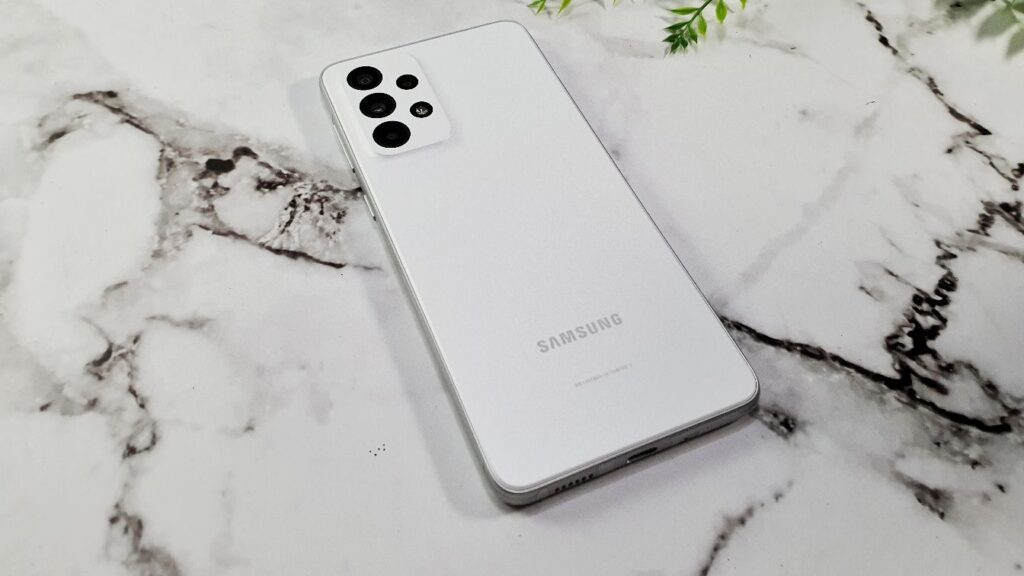 The rear camera quad camera array is equipped beyond the norm as its primary rear 48MP camera features optical image stabilisation which is something that’s rarer than hen’s teeth in budget phones and which gives the Galaxy A33 a decisive edge for steadier shots and videos. Up front is a fairly standard 13MP fixed focus selfie camera but it and the rear camera are capable of up to 4K@30fps video.

Belying its size, the Galaxy A33 has a large 5,000mAh battery that’s able to last north of two plus days with modest use based on official sources. The phone also supports 25W fast wired charging though the pickle here is getting a compatible charger and they omitted one in the box this time around.

For RM1,499 and with features that are rare in a budget phone in its price range like IP67 water resistance, 5G connectivity, stereo speakers, fast charging and OIS in its camera, our Galaxy A33 first look is very promising indeed. Stay tuned for our full review where we put it through its paces!