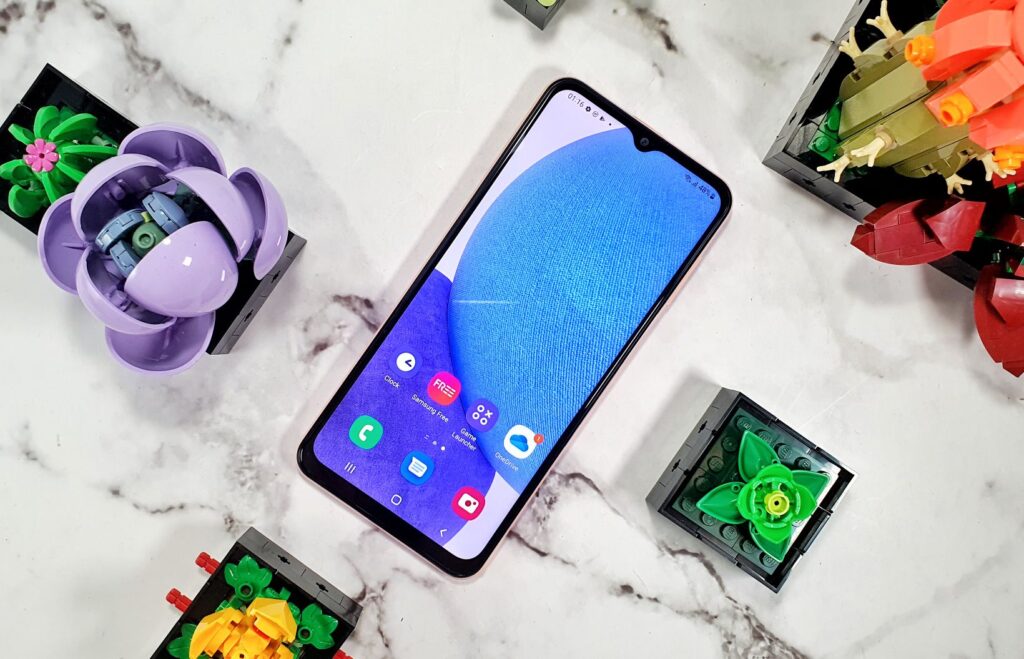 Not everyone can afford a cutting edge flagship smartphone like the Samsung Galaxy S22 which is where the likes of the midrange Galaxy A series come into the picture.

The Samsung Galaxy A23 is on the opposite end of the spectrum and is one of their most affordable Galaxy A phones available short of the Galaxy A03 and Galaxy A13 that we reviewed awhile back but is it worth the money? Here’s our Samsung Galaxy A23 review where we put it to the test! 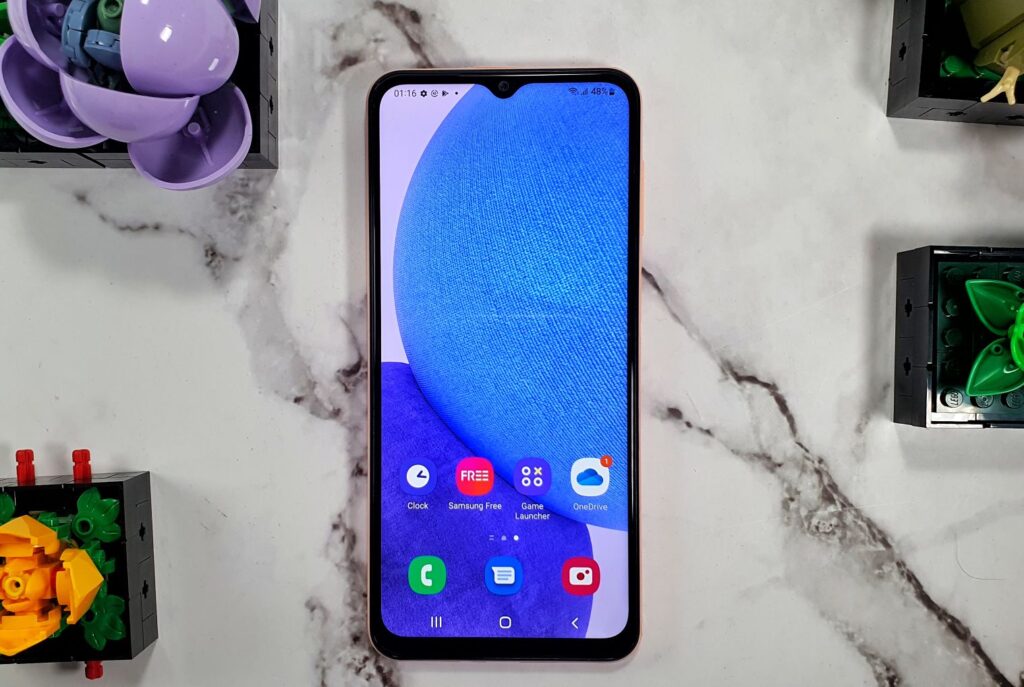 Samsung Galaxy A23 vs Galaxy A13 – What’s the difference?

The Samsung Galaxy A13 and the Galaxy A23 are aesthetically similar to each other and both come in a similar variety of colourways in Malaysia which include Awesome Peach, Awesome Black, Awesome Blue and Awesome White with a similarly sized 6.6-inch display, 5,000mAh battery, mono speaker and side mounted power button and fingerprint reader as well as a similar lack of 4G connectivity.

Both the Galaxy A13 and Galaxy A23 also have a similar triple card slot that allows for dual nano SIM card slots and a microSD card for additional storage up to 1TB in size. 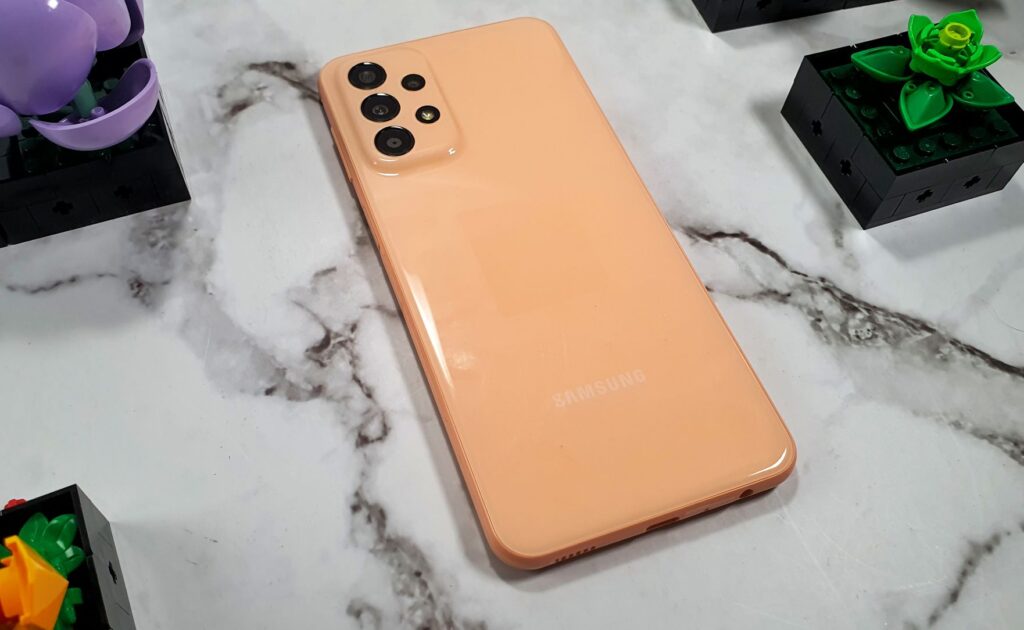 Where the Galaxy A23 differs from the Galaxy A13 is that it costs RM200 more at RM999 but in exchange adds optical image stabilisation (OIS) to the main rear 50MP camera, faster 25W fast charging versus the slower 15W charging on the Galaxy A13 and a more efficient processor on paper. While RAM and storage capacity vary by region, the Galaxy A13 and Galaxy A23 for Malaysia both have 6GB RAM and 128GB of expandable storage.

The Samsung Galaxy A23 has a design that’s akin to the more affordable Galaxy A13 with a plasticky looking backplate available in one of four different paint jobs with a quad camera array on the upper left corner of the rear.

Our Galaxy A23 review sample in Awesome Peach has a finish that borders on the pinkish side and the bright nature of the finish also helpfully makes fingerprints much less obvious than the black version. 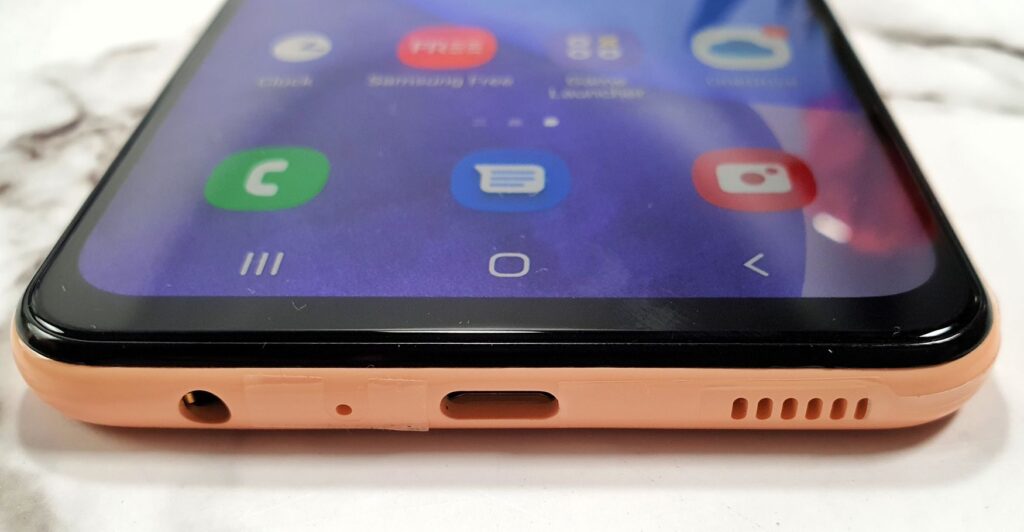 The base of the phone has a USB-C charging port with 25W fast charging support, a grille for the mono speaker and a 3.5mm audio jack. On the left of the phone is a triple SIM and microSD card combo tray while the right hosts a fingerprint reader that doubles as a power button along with a volume rocker. The top is otherwise bare.

Up front, you get a 6.6-inch Infinity V PLS TFT LCD display with FHD+ resolution at 1080 x 2,040 pixels and a standard 60Hz refresh rate. The side and top bezels are relatively slim though the bottom bezel is slightly thicker than the rest.

Overall build quality is sturdy with an even heft though it’s quite obviously made of polycarbonate. In keeping with Samsung’s efforts at sustainability, the packaging only contains the phone itself, a SIM eject pin and a USB-C charging cable.

Aesthetics aside, our Samsung Galaxy A23 review unit has a more efficient Snapdragon 680 octacore processor with a 4G LTE modem, 6GB RAM, 128GB of expandable storage and a 6.6-inch FHD+ Infinity-V LCD display with a 60Hz refresh rate. Keeping it powered is a 5,000mAh battery and fast 25W charging. It lacks wireless and reverse wireless charging options but that’s to be expected in its price range.

Here’s how it stacks up on paper:

The Snapdragon 680 is a midrange processor built on a 6nm process with a quartet of 2.4GHz Kryo 265 Gold cores based on the earlier ARM Cortex A73 cores for heavy duty work and a quartet of high efficiency 1.8GHz Kryo 265 Silver cores based on the older Cortex A53 cores for handling lighter duties along with an Adreno 610 GPU. When subjected to synthetic benchmarks, our Samsung Galaxy A23 review unit yielded the following:

The phone delivered fair results in synthetic benchmarks on account of the more efficient Snapdragon 680 processor though it still pales to the likes of even the Galaxy A33. Nevertheless, benchmarks are still a notch or two above the Galaxy A03 and Galaxy A13 that we’ve reviewed.

When tested over the course of a week, the Galaxy A23 proved to be a competent workhorse phone especially for what you pay for. The performance differences aren’t particularly tangible compared to the Galaxy A13 and both offer fair performance for day to day use for calls, web browsing, casual gaming and the like. It’ll run the usual mobile gaming staples like PUBG and CODM but at low settings and the lack of 5G isn’t much of an issue at this price point

Of note here is that the phone runs the latest Android 12 along with their latest OneUI 4.1 user interface which means it’s as current as it gets though there’s no official word on the update policy for an entry-level Galaxy A series phone of this nature. At the very least, you’re getting at least one OS upgrade to Android 13. 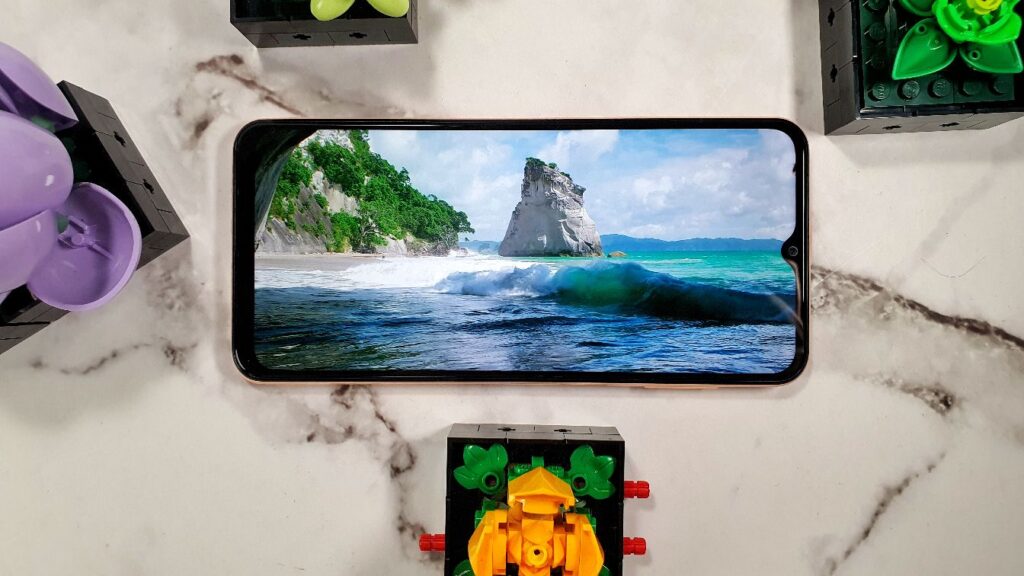 The 6.6-inch FHD+ 60Hz LCD display is akin to that used in the Galaxy A13 and has good colours and visibility indoors though outdoors visibility is on the dim side even when cranked to maximum.

The 60Hz refresh rate is serviceable and it’s only apparent when you’re scrolling through long menus and pages. Still, you’re getting a decidedly large and higher FHD+ resolution display versus the 720P displays that you typically pay for at this price range. On the audio front, the single sole mono speaker at the base is decent but unremarkable with fair volume and understandably limited bass.

Overall battery life on our Galaxy A23 review sample is good though not quite as long as the Galaxy A13 with the PCMark battery life test yielding 13 hours and 24 minutes of battery life while practical tests got close to two days of average use on the 5,000mAh battery. Charging it is a bit faster than expected on account of the 25W fast charging support and it’s able to charge to 30% in about half an hour and under 2 hours for a full charge from dead zero.

Our Samsung Galaxy A23 review sample features a proven quad camera setup common to many cameras in its price range with one particular upgrade that’s typically found in much pricier phones – optical image stabilisation.

The majority of the grunt work is undertaken by a 50MP F/1.8 primary camera that’s akin to the one used in the cheaper Galaxy A13 but the provision of OIS makes it a lot easier to eke out for steadier, judder free shots. 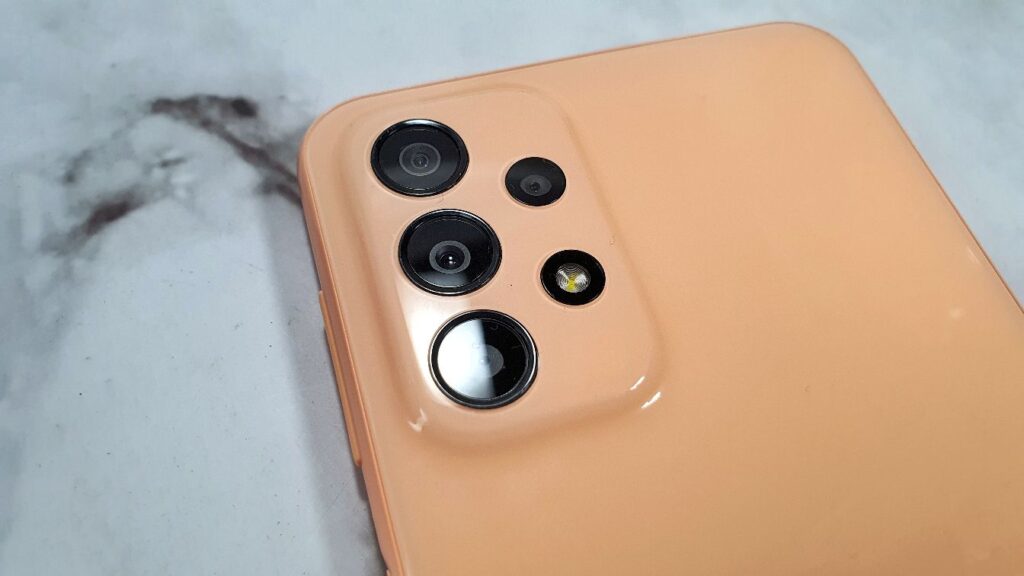 Paired with the 50MP camera is a standard issue 5MP F/2.2 ultra wide angle camera, a 2MP depth sensor and a 2MP macro camera. Up front, you get an 8MP F/2.2 selfie camera. Both the front and rear cameras are also able to capture 1080P@30fps video. Astute readers will note that this setup is similar to the cheaper Galaxy A13 but the inclusion of OIS to the main 50MP camera makes it more capable of taking clearer shots albeit at a higher price. 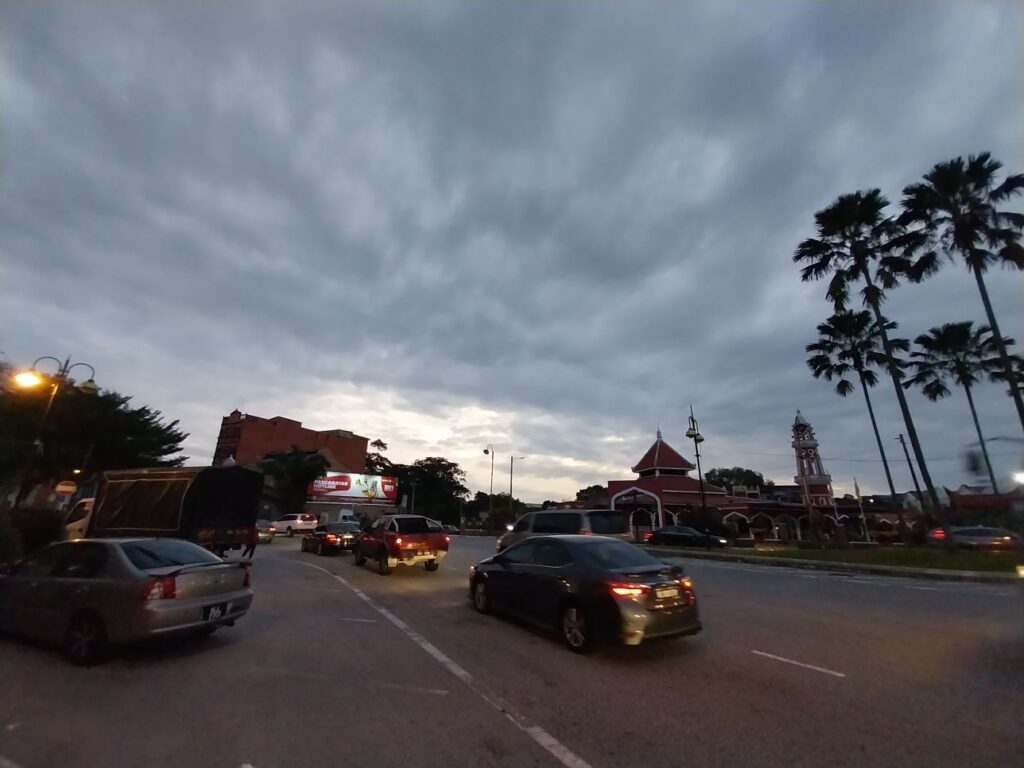 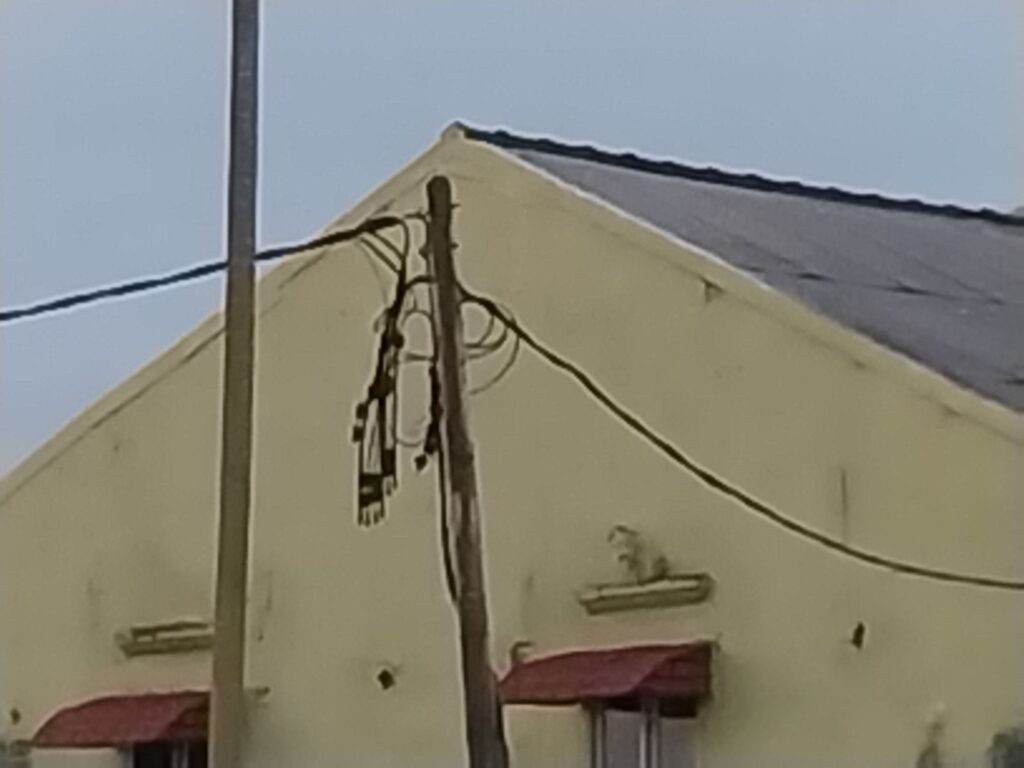 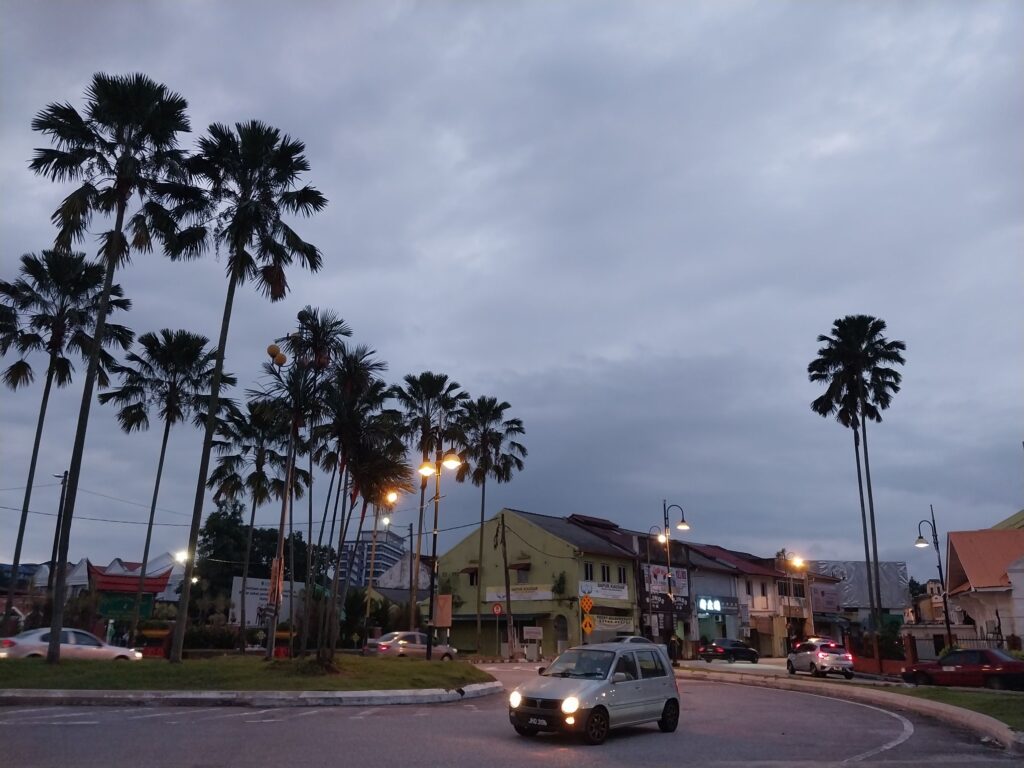 The provision of OIS to the main 50MP camera makes a world of difference, allowing the 50MP sensor to capture crisp and vibrant shots that punch above its price point especially in daylight conditions and the phone also offers a 2x and 10x digital zoom by cropping the feed from the main sensor though it’s best you eschew zooming. It’s able to capture fair shots in dim light with similar results to the A13 though the provision of OIS means more consistent, judder free results even with impromptu shots. 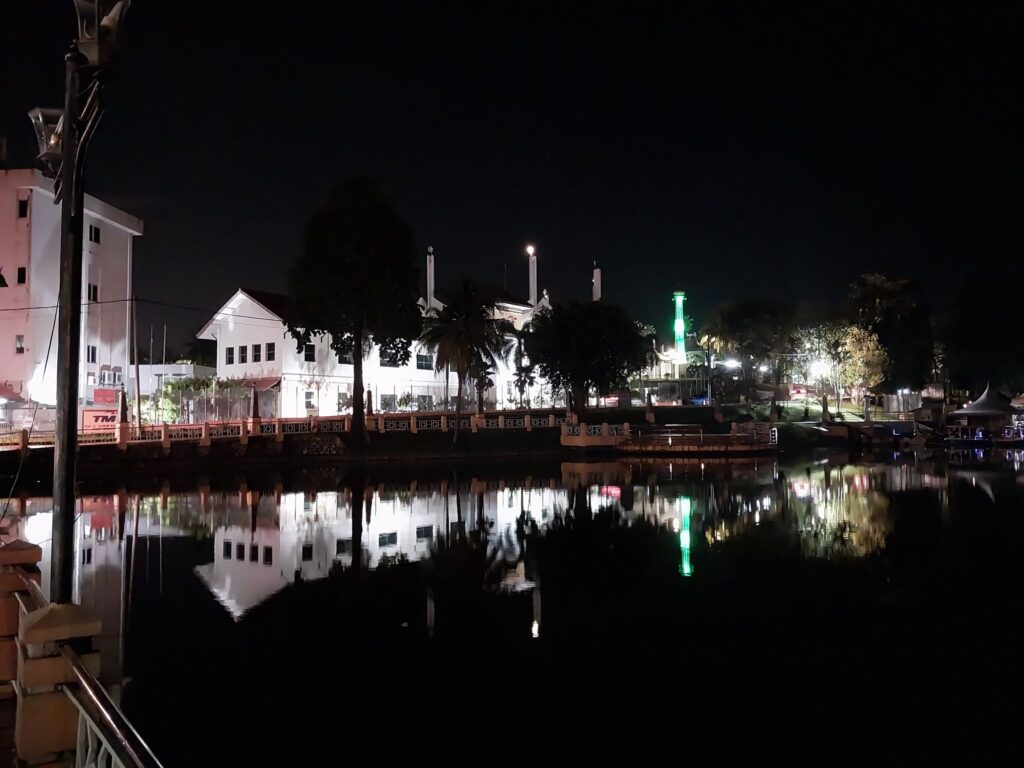 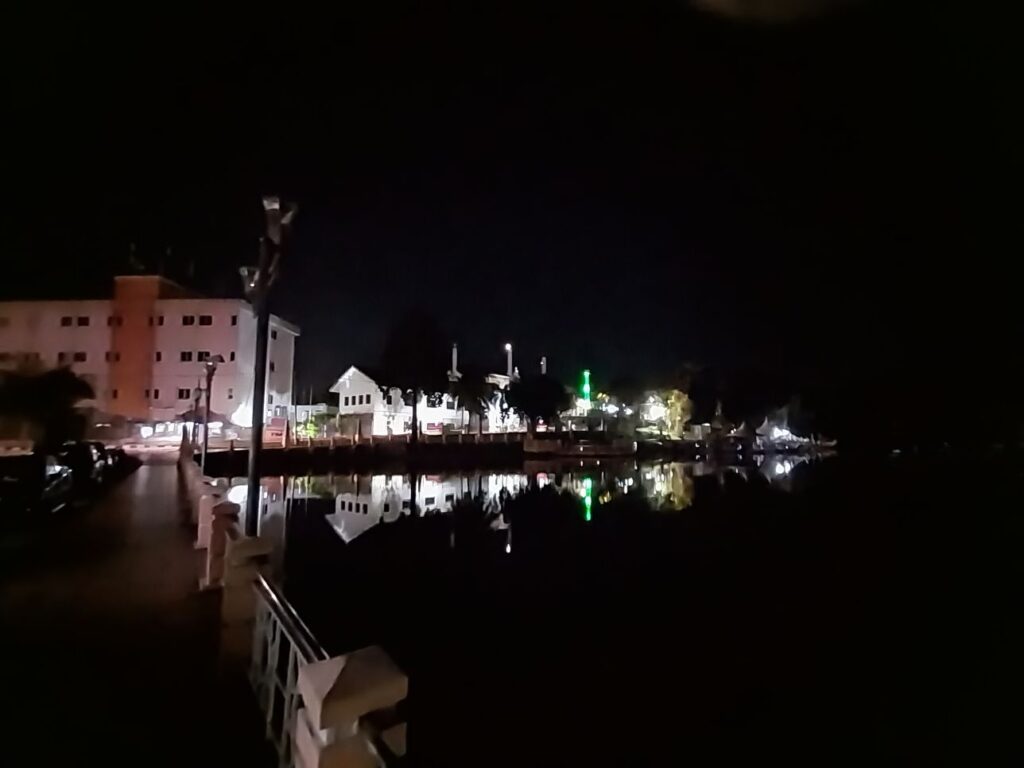 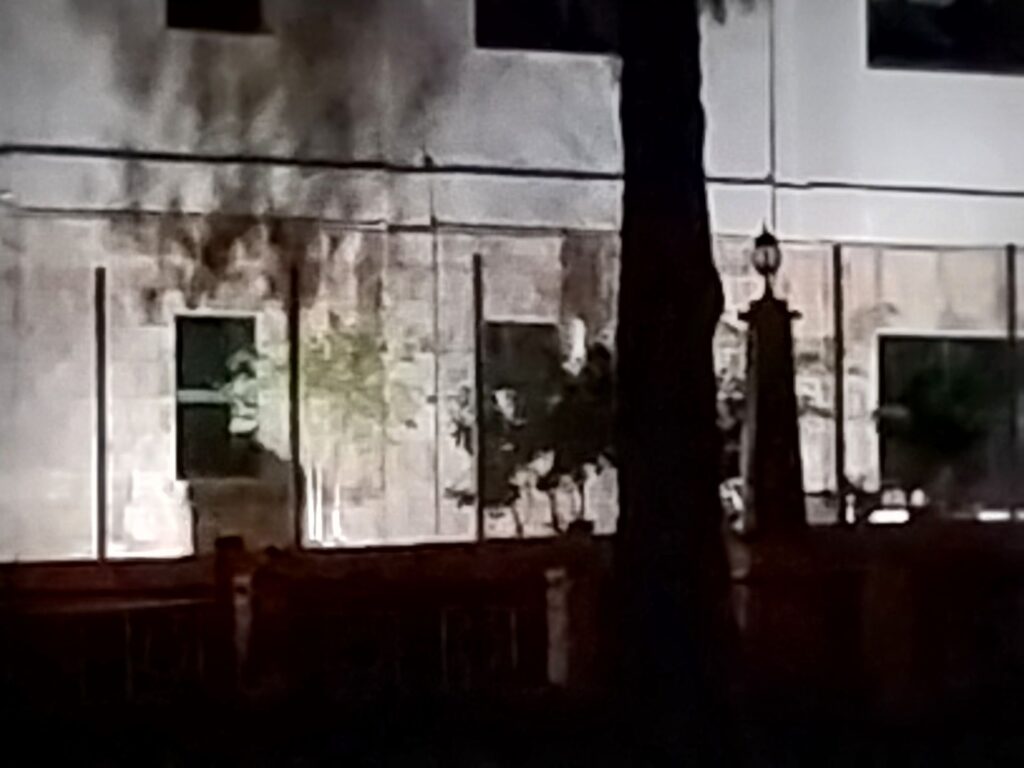 The ultrawide camera has similar colour rendition to the main 50MP camera but needs brightly lit conditions for best results as detail and dynamic range nosedive after sundown while the provided macro camera is underwhelming at best while also needing bright lighting to yield viewable results. Selfies are decent but unremarkable as the front camera lacks OIS but are sufficient for Instagram and Facebook.

Should you buy the Samsung Galaxy A23?

On its own merits, the Samsung Galaxy A23 punches above its weight class with the provision of a large FHD+ display, a large battery with 25W fast charging and the provision of OIS stabilisation for the rear camera. For under RM1,000, you’re getting fair performance for price with a phone that covers the essentials in a very competent fashion while packing an OIS-stabilised camera. 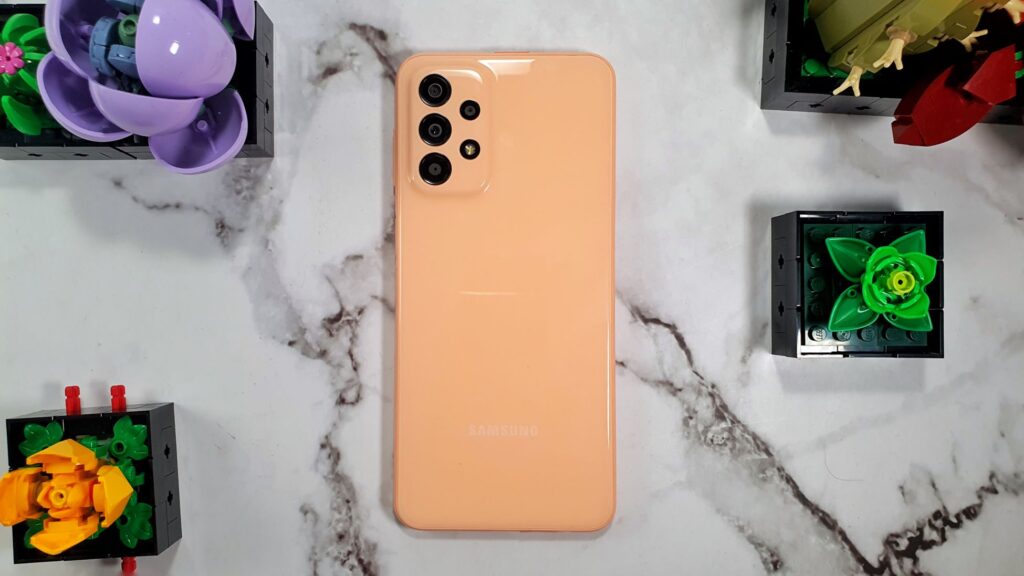 The Samsung Galaxy A23 is an entry level workhorse phone that plays to its strengths, offering a large and crisp display, long battery life and is one of, if not the only camera phone currently in its price range with optical image stabilisation to offer better quality shots.