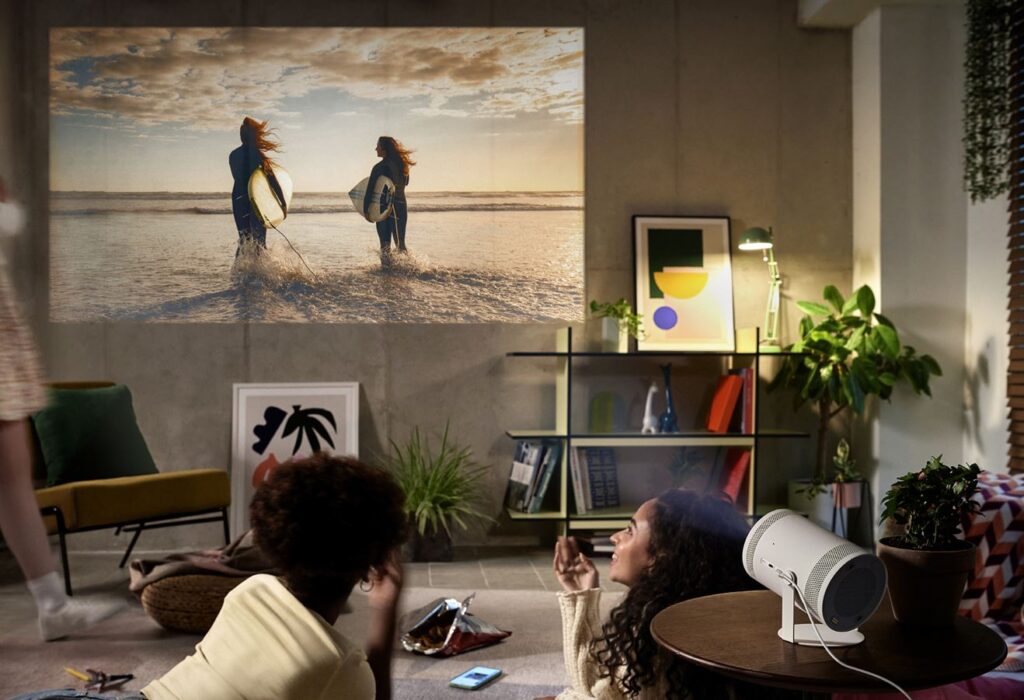 Samsung is best known for their range of smartphones across all price points from the cutting edge Galaxy S22 series to their workhorse Galaxy A series as well as their powerful QLED TVs but one of the more unique offerings that was showcased at CES 2022 will be making its way to our shores as they’ve just opened up a Samsung Freestyle Malaysia registration of interest page on their official website. 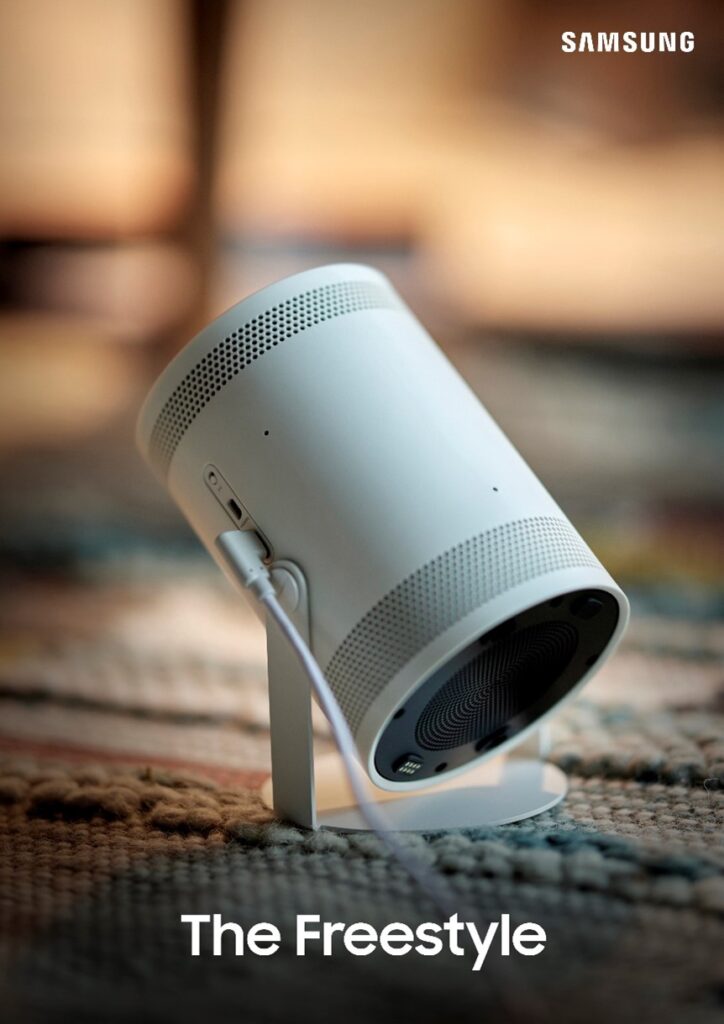 What this means is that the Samsung Freestyle projector will be arriving in the near future in Malaysia which will likely be a matter of weeks. To be clear, it’s not a preorder yet with its commensurate array of tempting freebies but it’s the clearest indicator of a Samsung Freestyle Malaysia launch.

What is The Freestyle projector by Samsung

For the uninitiated, The Freestyle is a man-portable projector that bears somewhat of a resemblance to a compact searchlight but with far more practical and entertaining use cases. Weighing about 830g, the projector is able to display up to a 100-inch image at Full HD resolution with a 550 lumens brightness from 2.7 metres away from a flat surface. A 180-degree pedestal lets you angle it however you wish. 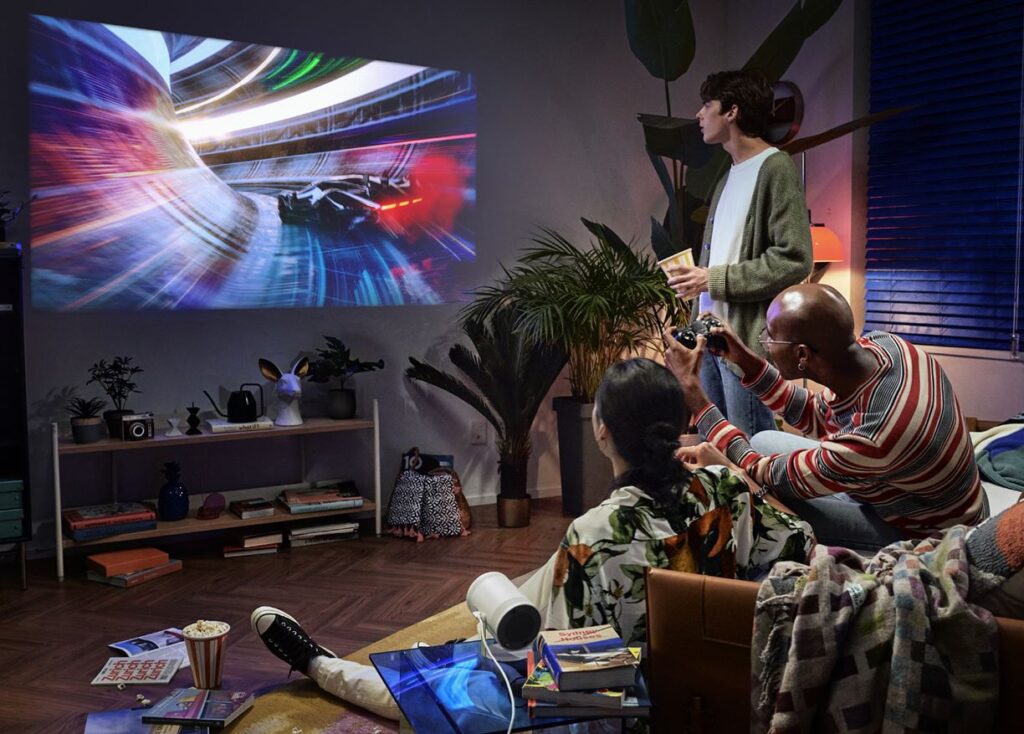 This versatility means that you’re able to project it straight onto a ceiling if you deign to do so and combined with its compact size and its built-in battery, you’re able to watch a movie almost anywhere you go with a flat surface to project an image on.

It even has auto-levelling to ensure a perfectly even image and auto focus to ensure you don’t get a blurred image. Should the unforeseen happen and you don’t have a white surface to project your Book of Boba Fett binging session on, The Freestyle has a Smart Calibration mode that can assess the surface you’re projecting on and adjust its colour saturation accordingly for an equally visceral viewing experience.

It’s not only portable, it has all the functionality of a Samsung Smart TV. What this means is that it has their own Tizen operating system running under the hood with built-in streaming support and casting for iOS or Android devices, support for virtual assistants including Bixby and Alexa and it also has a 360-degree omnidirectional 5W speaker to kick out sound without you having to hunt around for a separate pair of speakers.

Further adding to its versatility is the fact that its built-in battery can be charged al fresco via a USB-PD from an external battery so you can quite literally set up shop on a hiking trip with a 50W/20V power bank.

In the event that you don’t want to indulge in a more practical movie binging session but want something more ambient, The Freestyle is also able to activate an Ambient mode with several presets to set the mood ranging from Lighting, Prism and Scene and even photos too which ought to make this a hit at parties.

To register your interest for The Freestyle projector by Samsung, you can check out Samsung Malaysia’s official website where you can put in your details and the moment it’s ready for preorder, they’ll send you a message. The registration of interest for The Freestyle takes place now until 6th of March 2022 which gives more of a hint that it’ll most likely appear sometime in March or April 2022. 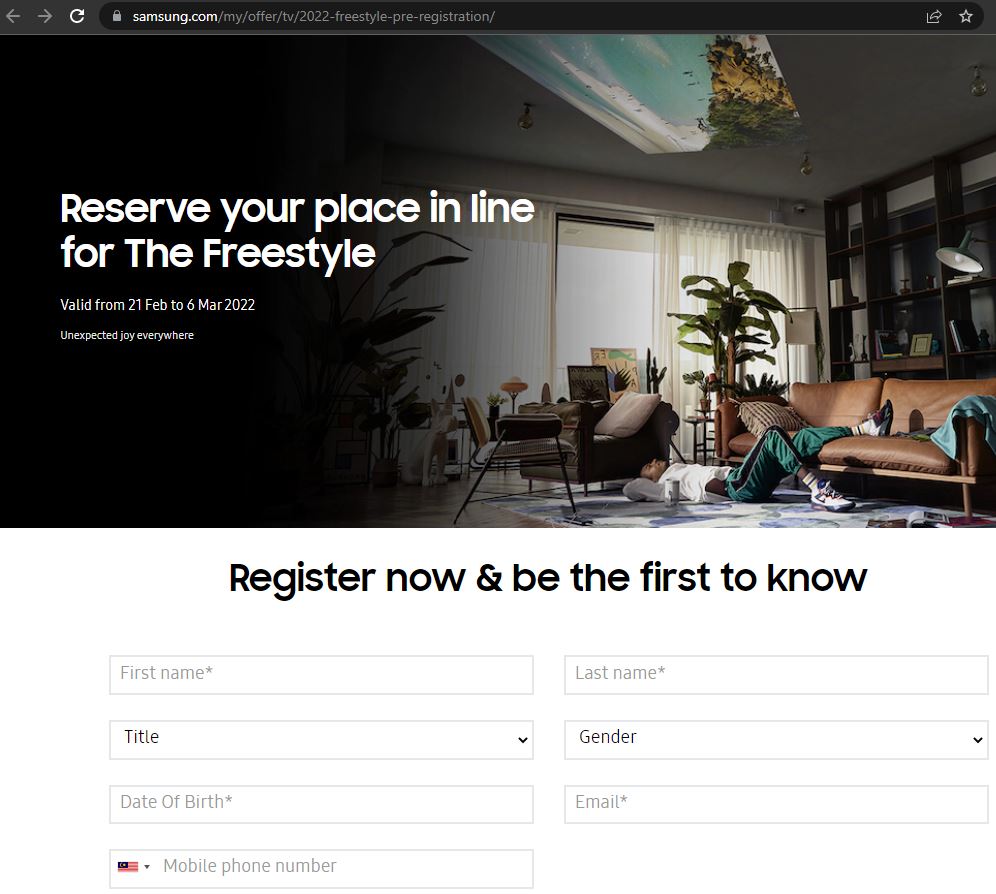 To be clear, there’s no price or preorder details yet but at its launch in the United States,  it was priced at US$899 which is about RM3,763. You can check out Samsung’s official The Freestyle page at https://www.samsung.com/my/offer/tv/2022-freestyle-pre-registration/