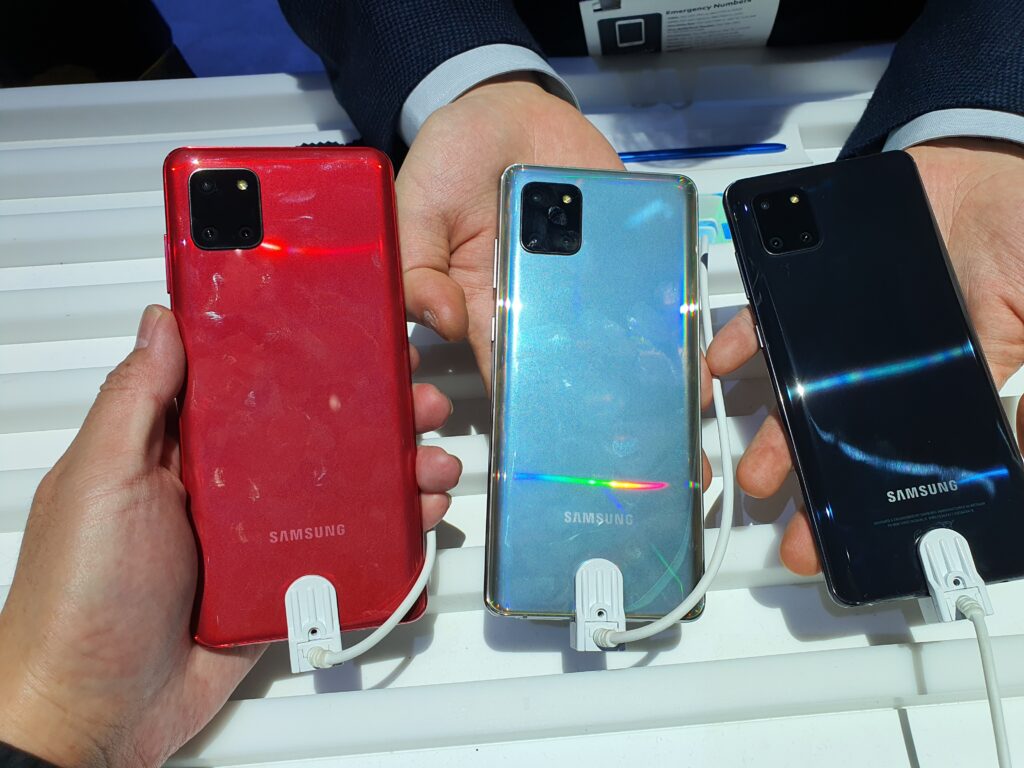 The Samsung Galaxy S series and Galaxy Note series phones are intended as the main premium phones in their line-up with prices to match but the brand seems to be turning their gaze towards that gray zone between their midrange Galaxy A series and the aforementioned flagship class phones with the announcement of not one but two affordable, yet flagship-grade phones dubbed the Galaxy S10 Lite and the Galaxy Note10 Lite at CES 2020 in Las Vegas. We managed to get a look at both of them at the Samsung showcase held at the Las Vegas Convention Centre. 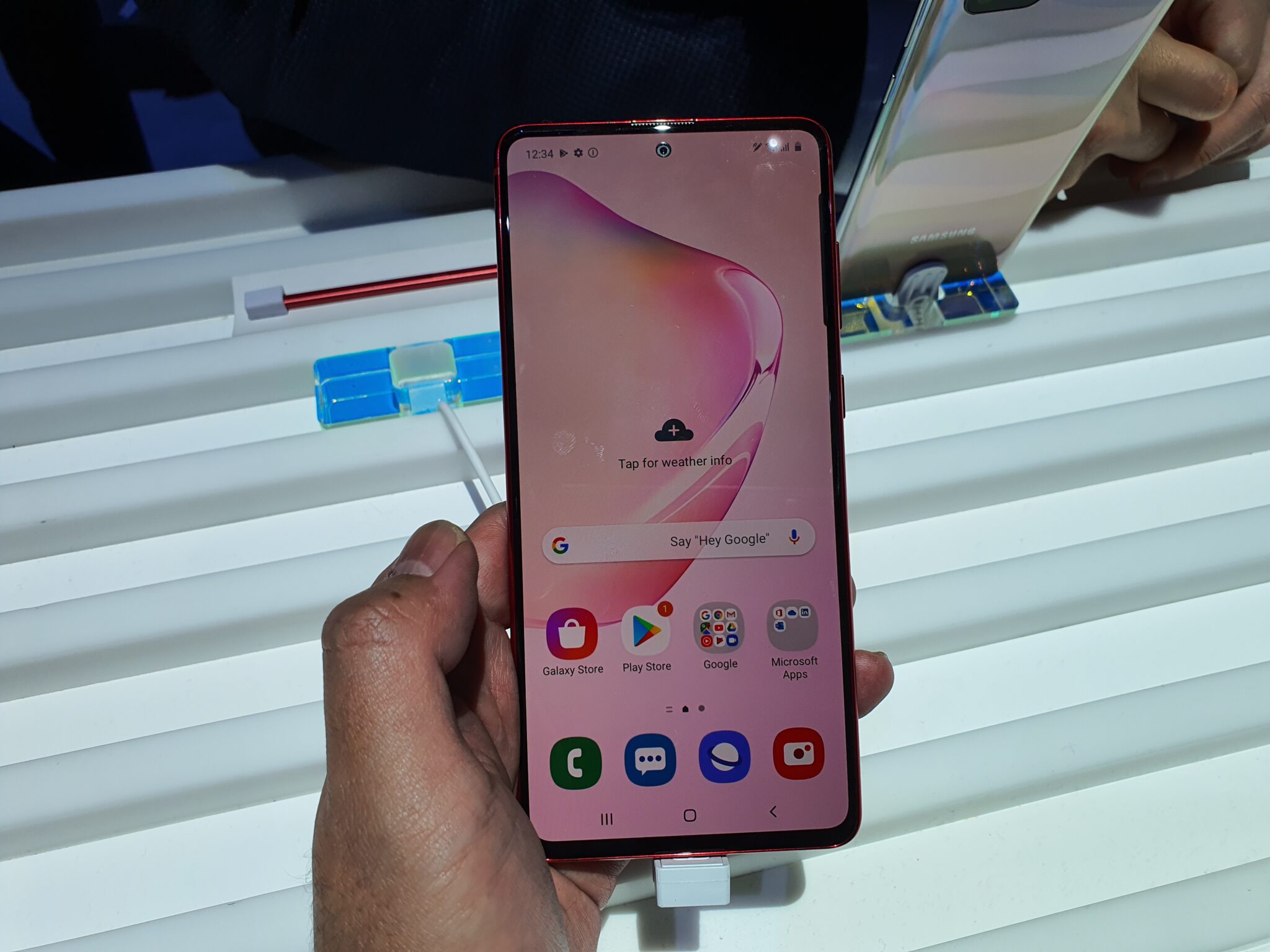 Both the new Galaxy S10 Lite and Note10 Lite will have a 6.7-inch FHD+ Super AMOLED Infinity-O display up front.

In terms of pricing, it’s not set in stone but logically speaking, it will have to be cheaper than any existing Galaxy S or Note series phone in the current line-up but it will likely be pricier than almost any Galaxy A series phone. 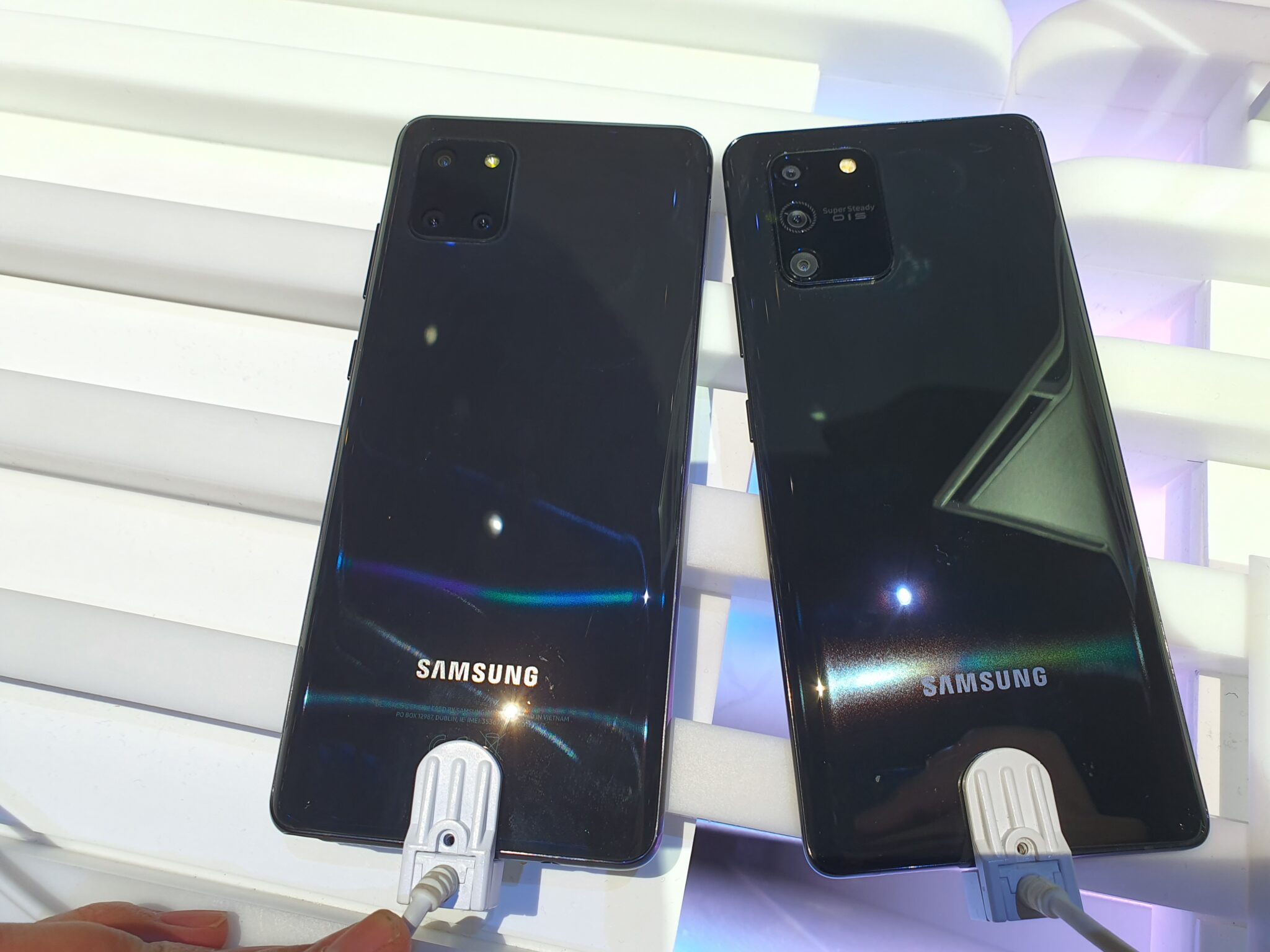 Both the Galaxy S10 Lite and Note10 Lite both have a 6.7-inch Super AMOLED Infinity-O display with 2,400 x 1080 pixel resolution up front and a small O-shaped punchhole for a 32-MP F/2.0 selfie camera, either 6GB or 8GB DDR4 RAM depending on region and 128GB UFS 3.0 storage expandable via a hybrid SIM card slot as well a large 4,500mAh battery charged via a USB Type-C port at the base.

All this is crammed into a glasstic casing that comes in a variety of different colours, also depending on region. Both phones are also capable of using Samsung Pay, which also, of course depends on region for it to be active. 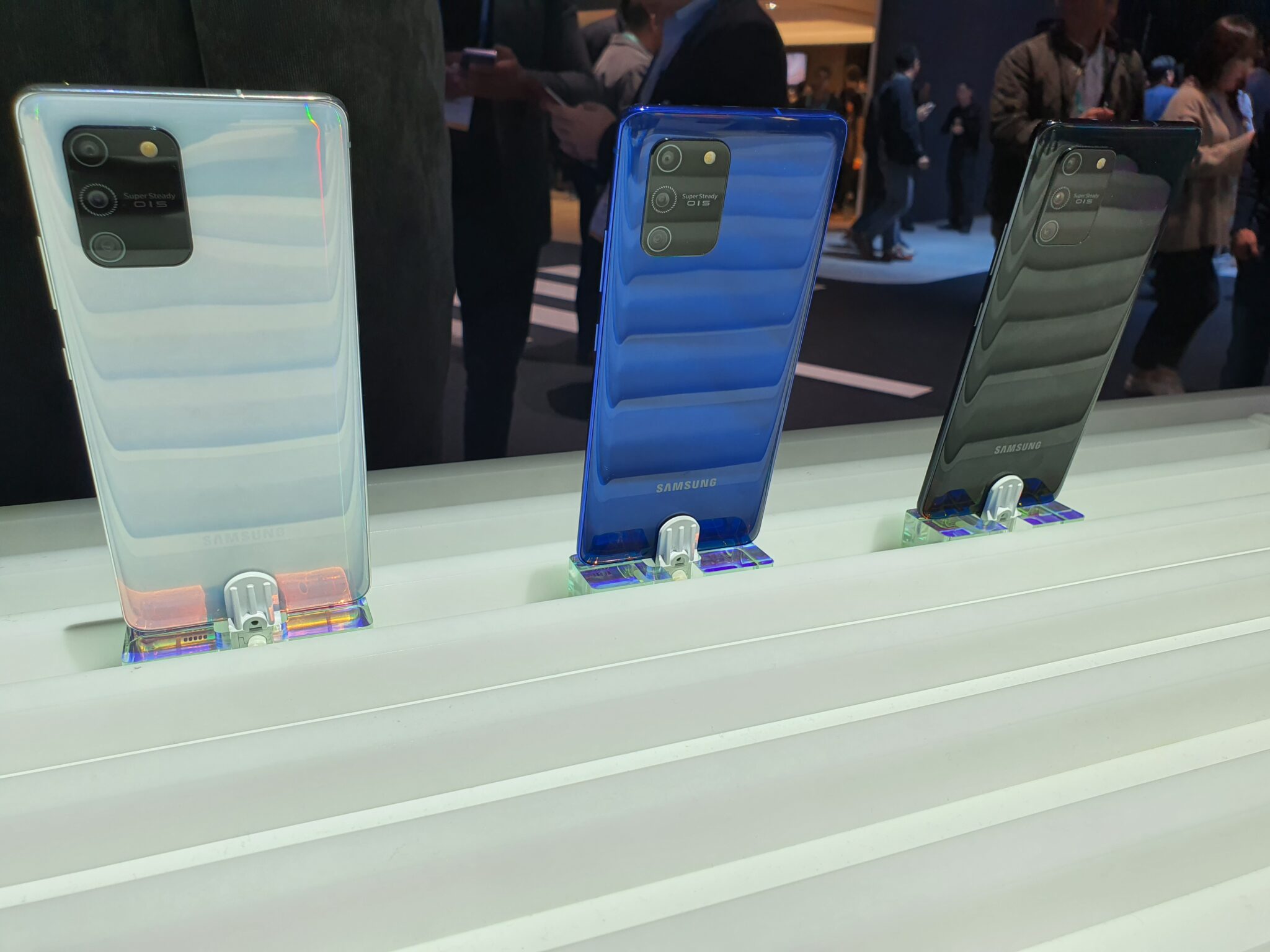 Colour options for the Galaxy S10 Lite seen at CES 2020

According to the representative onsite, both the Galaxy S10 Lite and Galaxy Note10 Lite won’t have DeX mode so you can’t fire up a desktop mode when hooked up to a monitor or open up an instance of your smartphone display on your PC though seeing its intended target market, that’s not a big tradeoff in the scheme of things.

In terms of specific differences, the Galaxy S10 Lite will have a rear triple camera array that Samsung says will include a new Super Steady OIS technology on the primary 48-MP F/2.0 camera that’s a step better than the Super Steady mode on older phones. This is paired up with a 12-MP wide angle camera and a 5-MP macro camera. 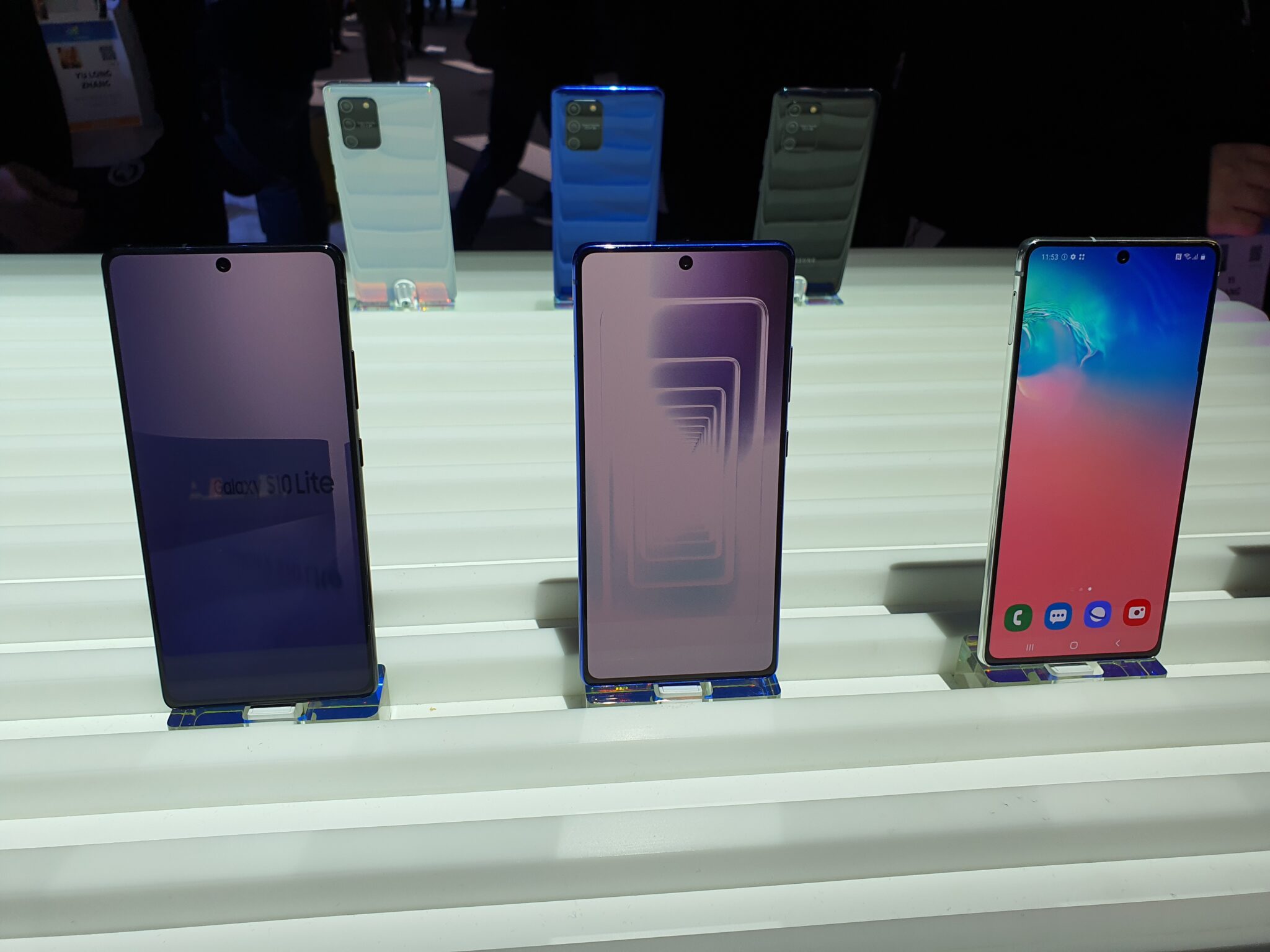 The processor for the Galaxy S10 Lite is an interesting choice indeed as they’ve opted for a Snapdragon 855 octacore processor which is a flagship grade SoC seen in many of last year’s flagships. We also noticed that it lacks a 3.5mm audio jack. According to Samsung, the Galaxy S10 Lite will be available in three colours – Prism White, Prism Blue and Prism Black at an official price of 649 Euros which translates to RM2,919.

As usual, these are prices for Europe with all their attendant taxes and whatnot so it does NOT translate to what it will likely cost in Malaysia which will be likely a good deal lower and will most likely be below the cost of a Galaxy S10e at RM2,699.

The Galaxy Note10 Lite will instead use an Exynos 9810 octacore processor which is the same seen on the Galaxy Note9 from last year while the rear camera array consists of a primary 12-MP camera with their Dual Pixel tech, a 12-MP 123-degree ultra wide angle camera and a 12-MP telephoto camera with 2x optical zoom. Both the primary and telephoto camera come with optical image stabilisation. 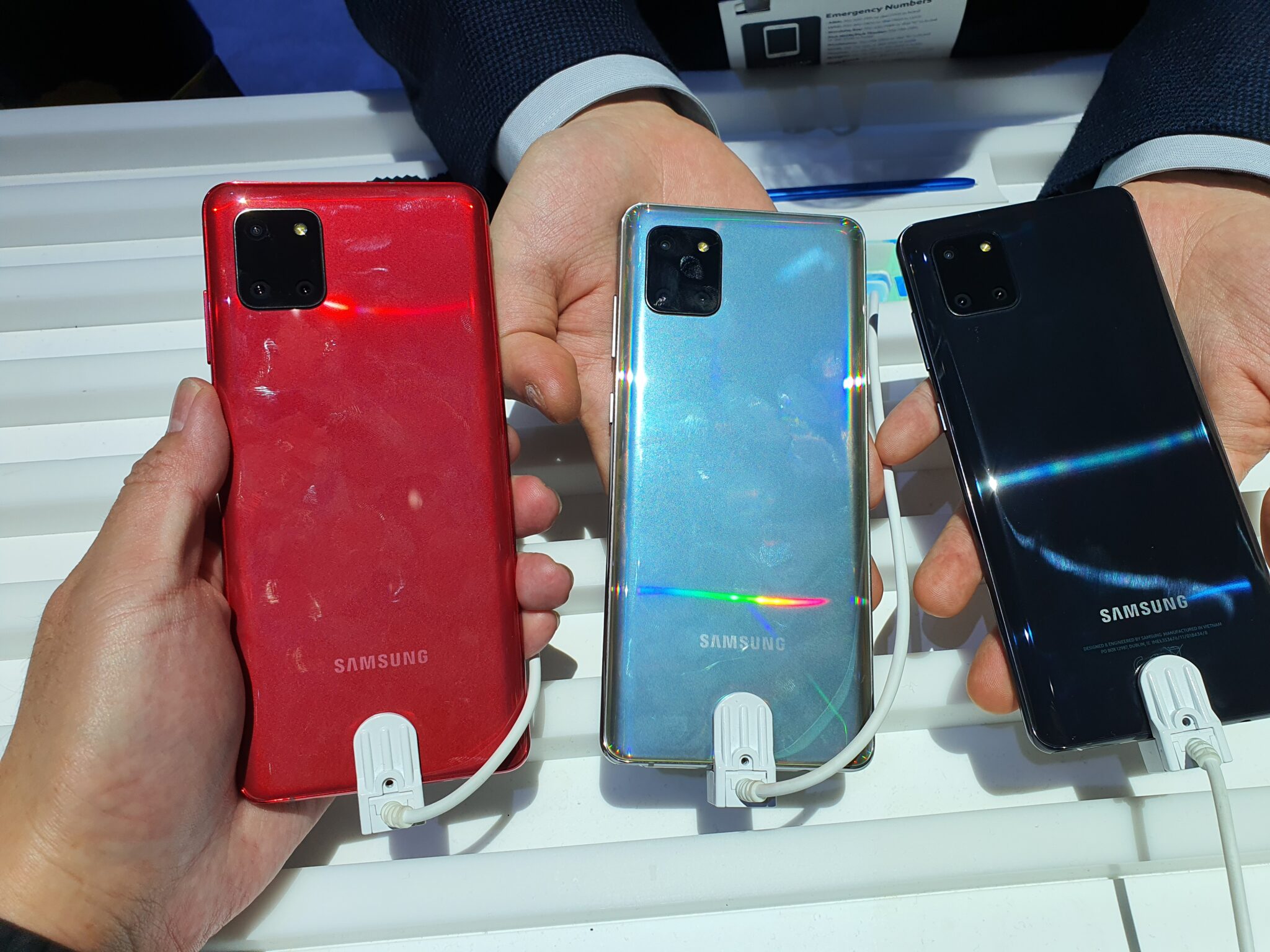 Colourways for the Galaxy Note10 Lite seen at CES 2020.

The provided S Pen stylus is similar to that of the Galaxy Note9 with BLE connectivity, allowing it to be used as a remote control though it lacks the gesture controls of the S Pen see in the Galaxy Note10. In terms of colours, the Galaxy Note10 Lite comes in Prism Black, Prism Red and Aura Glow though they didn’t announce prices for this as yet. It will likely be cheaper than the Galaxy Note10 which costs RM3,699 in Malaysia.

Both smartphones look very promising indeed and look set to offer their renowned flagship grade tech and user experience at a more accessible price point than ever before which is very promising indeed. It’s very likely that both the Galaxy S10 Lite and Note10 Lite will make it to Malaysia in the near future. Stay tuned to Hitech Century for more news and updates on both these unique new Samsung phones.