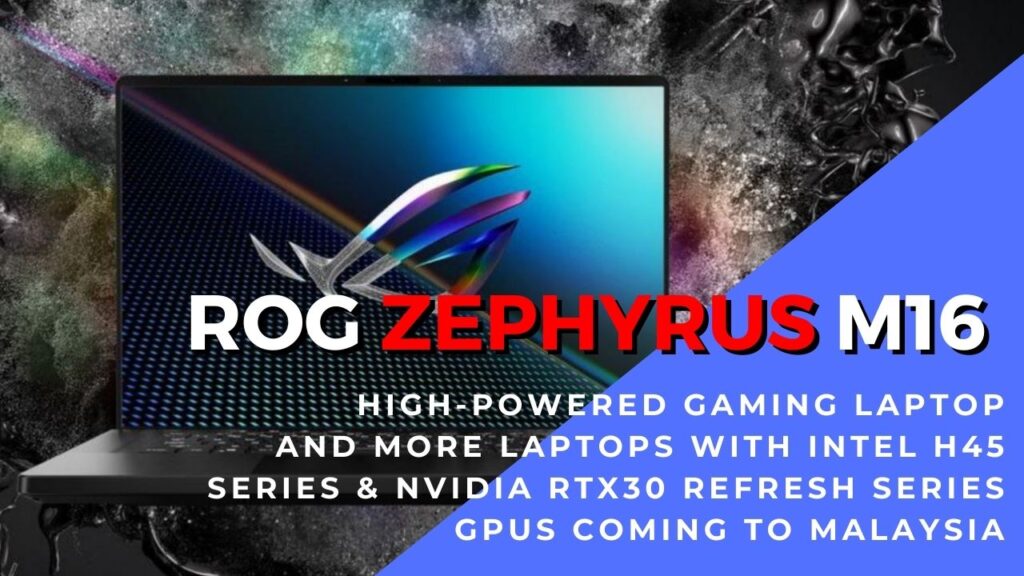 ASUS Republic of Gamers has unleashed a slew of their latest gaming laptops that include refreshed variants of their most popular models with many featuring Intel’s new H-45 series processors and the new NVIDIA RTX 3050 and 3050 Ti graphics cards.

Here’s how the new range of ROG gaming laptops stack up, what hardware they come with and the variants that will come to Malaysia along with the most important question of all – how much they cost and estimated arrival dates.

Stay tuned to the official ASUS and ROG page for more details.

The ROG Zephyrus M16 is the world’s first 4-sided narrow bezel gaming laptop and has 4.6mm thin bezels on every side of the display, including the bottom bezel too. 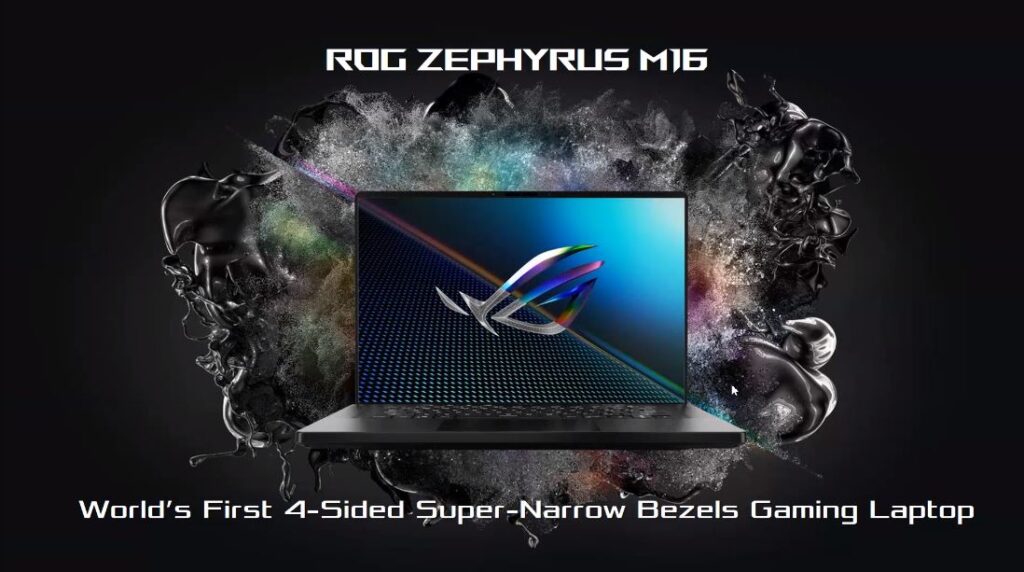 For Malaysia, the ROG Zephyrus M16 will come in two potential configurations. The first that will be coming by the end of June is designated as the Zephyrus M16 GU603H-MK8043TS and will come with a 16-inch WQXGA resolution display with 165Hz 3ms display and a 16:10 aspect ratio with 100% DCI-P3. 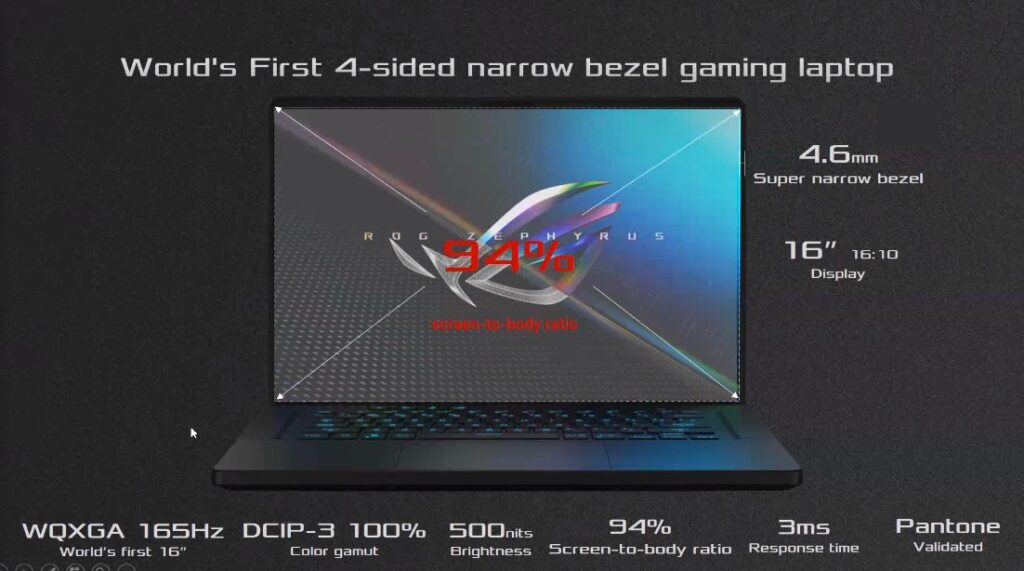 The second potential ROG Zephyrus M16 variant will arrive by the end of July, designated as Zephyrus M16 GU603H-RK8037TS.

This version will feature a similar 16-inch WQXGA resolution display with 165Hz 3ms display and a 16:10 aspect ratio with 100% DCI-P3 as the first variant along with a similar 11th Gen Intel Core i9-11900H processor but features a more powerful GeForce RTX3070 graphics card with 8GB GDDR6 VRAM and an 80W TGP, double the RAM at 32GB and a 2TB NVME PCIe SSD. 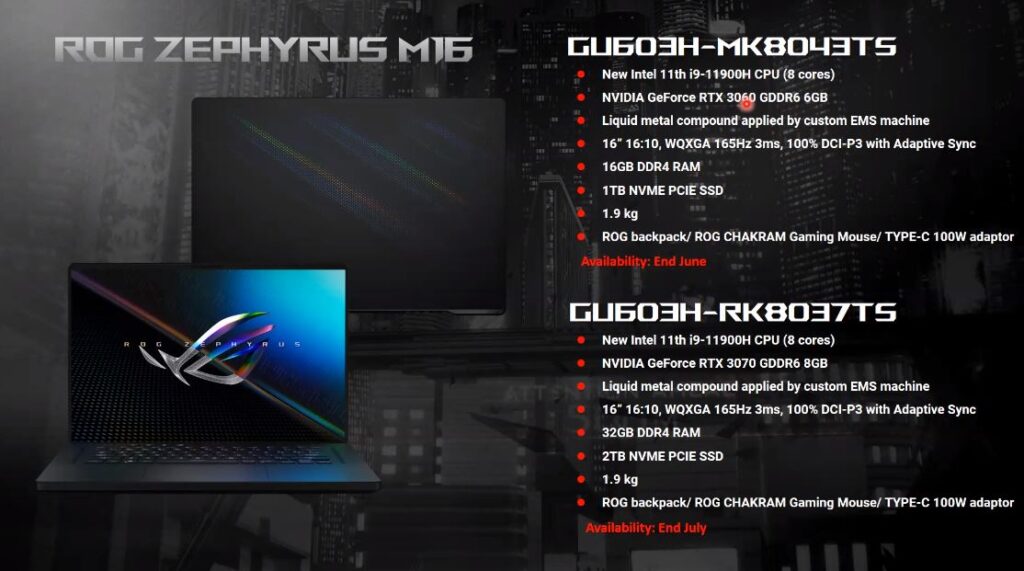 Of note is that the ROG Zephyrus M16, in all variants will feature six speakers with dual force-cancelling woofers enhanced with Dolby Atmos tech along with a 90Wh battery.

Purchases of either version of the ROG Zephyrus M16 gets you several free gifts that include an ROG backpack, an ROG Chakram gaming mouse and a Type-C 100W adaptor to power it.

According to ASUS, there is no price as yet for the Zephyrus M16 but it will be furnished closer to its launch date.

The ROG Zephyrus G14 will come in four potential configurations for Malaysia, all of which are powered by the AMD Ryzen 7 5800HS-series 3.0GHz processor with an end-May arrival date.

For gaming, it features a GeForce RTX3050 Ti graphics card with 4GB GDDR6 VRAM and 75W TGP. This version is priced at RM6,499 and also throws in a free ROG Impact gaming mouse.

The top lid also notably features their AniMe Matrix LED lighting that you can use to display messages and pithy quotes on demand. You also get a bunch of free gifts that include an ROG sleeve, a Type-C 100W AC adapter, an ROG Impact gaming mouse and a free copy of Microsoft Office Home & Student 2019.

The other three variants all have the same AMD Ryzen 7 5800HS processor but downgrade the display to a 14-inch Full HD display with 144Hz refresh rate and 100% sRGB with Adaptive Sync, feature 8GB DDR4 RAM and a 512GB PCIE SSD as well as a free copy of Microsoft Office Home & Student 2019.

One thing to note is that save for the entry level version with the GTX 1650 card, the other three variants of the ROG Zephyrus G14 not only pack the default AC charging adapter but a free 100W Type-C AC charger too. All versions will come with a free ROG sleeve to tote it around as well. 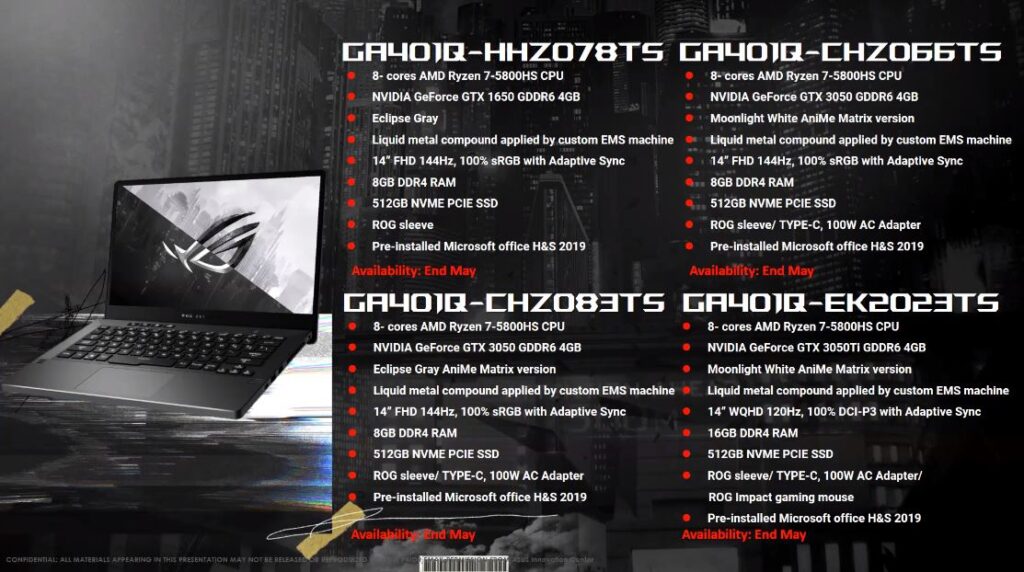 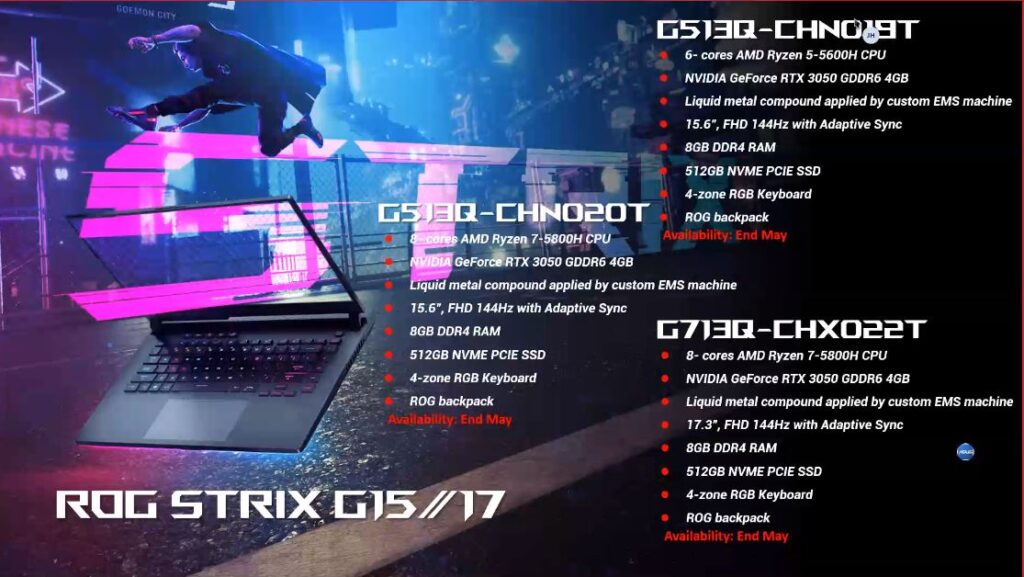 The second variant, designated as G513Q-CHN019T is mostly similar save for the fact that it features an AMD Ryzen 5-5600H 3.3GHz processor with it costing RM4,199. All three variants are slated for arrive near the end of May 2021.

The ROG Strix G15 Electro Punk edition is a refresh of its predecessor with better hardware and features a different paint job from the rest of its Strix G15 siblings with Electro Punk pink speckled armour caps and trim. 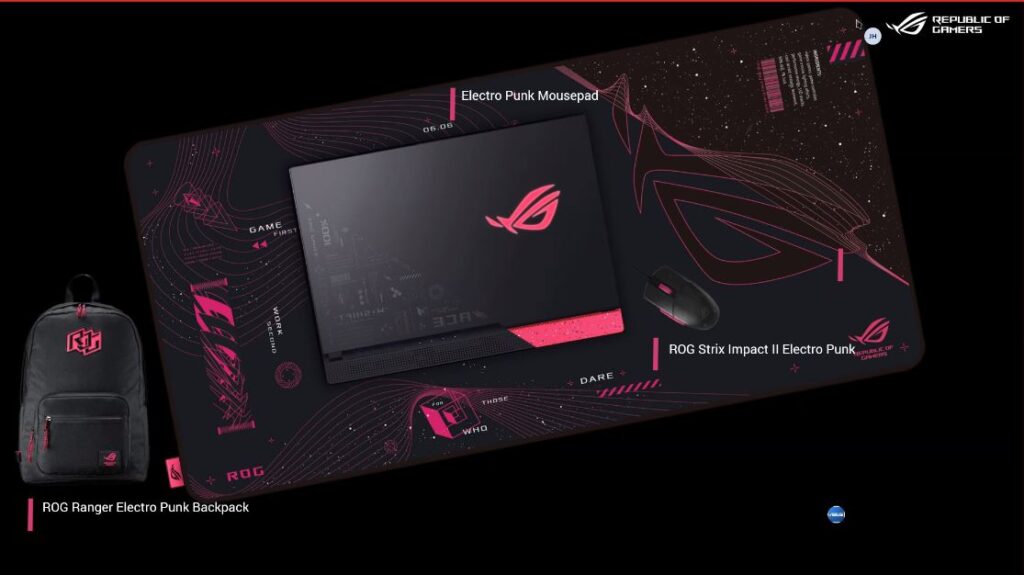 It also ships with a ROG Pink backpack, an ROG Pink Impact Gaming mouse and an Electro Punk mousepad with a slated arrival date of end May 2021 and priced at RM4,799. 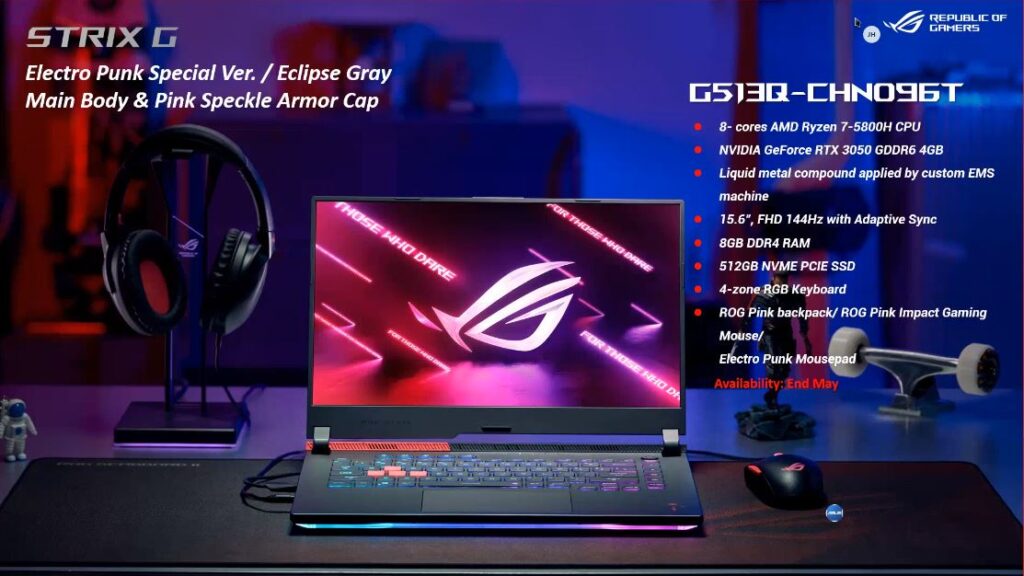 The refreshed ASUS TUF Dash F15 series is slated for arrival sometime in May with two colour variants which have identical specifications with your choice of either the existing Eclipse Gray finish (aka FX516P-EHN006T) and the new Moonlight White finish (aka FX516P-EHN007T) with the legendary MIL-STD-810H toughness that the TUF range are known for. 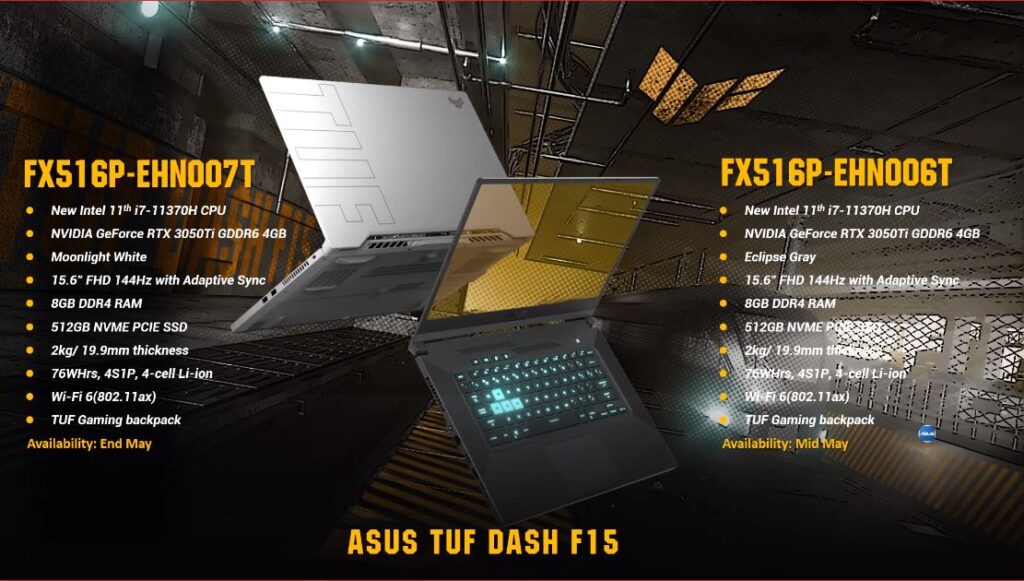 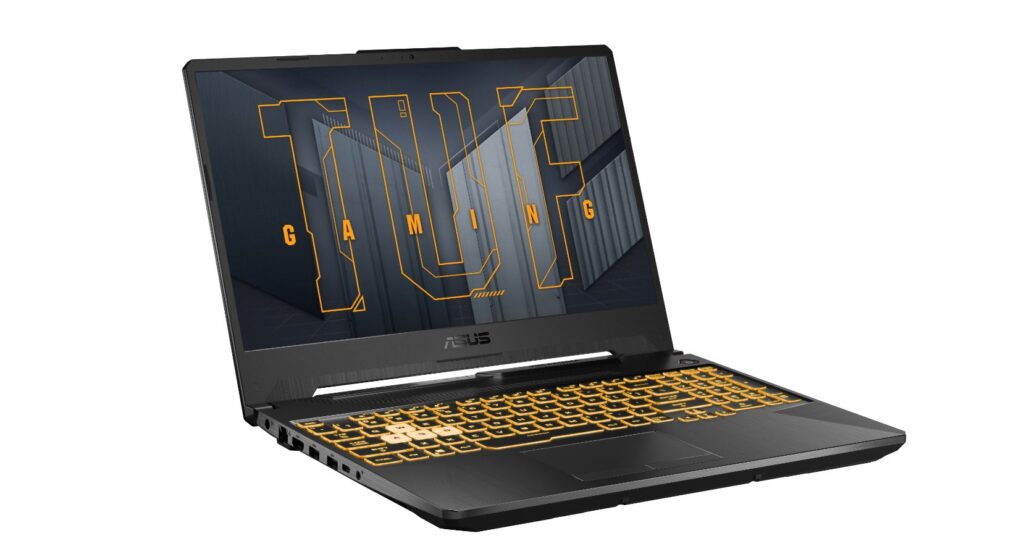