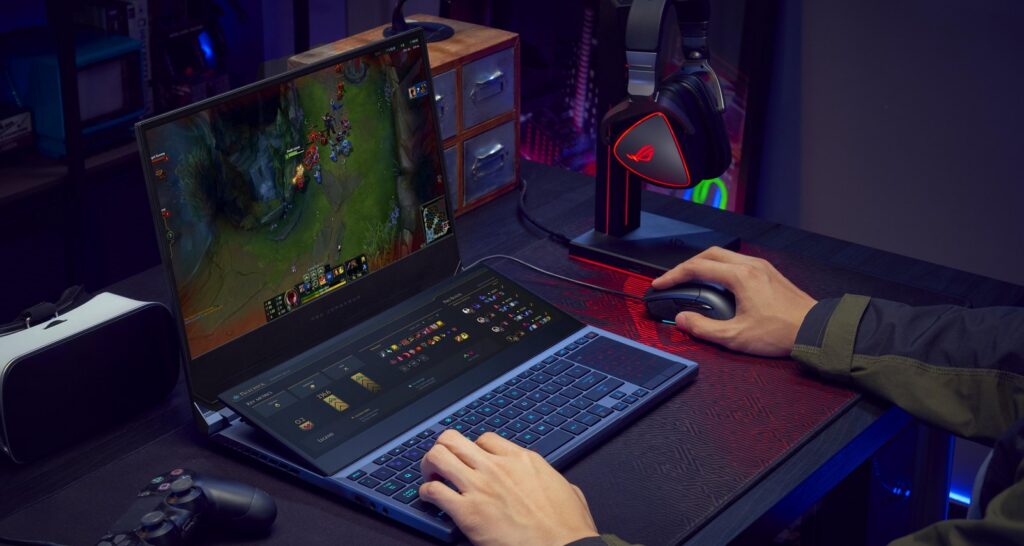 You can never have enough of a good thing and the newly announced ROG Zephyrus Duo 15 is perfect evidence of that as it takes everything gamers want in a gaming laptop – a svelte design and powerful specs – then, dials it to 11 while adding in a little something extra: a tilted 14-inch 4K touchscreen dubbed the ROG ScreenPad Plus that acts as a secondary interface and to offer more screen real estate. 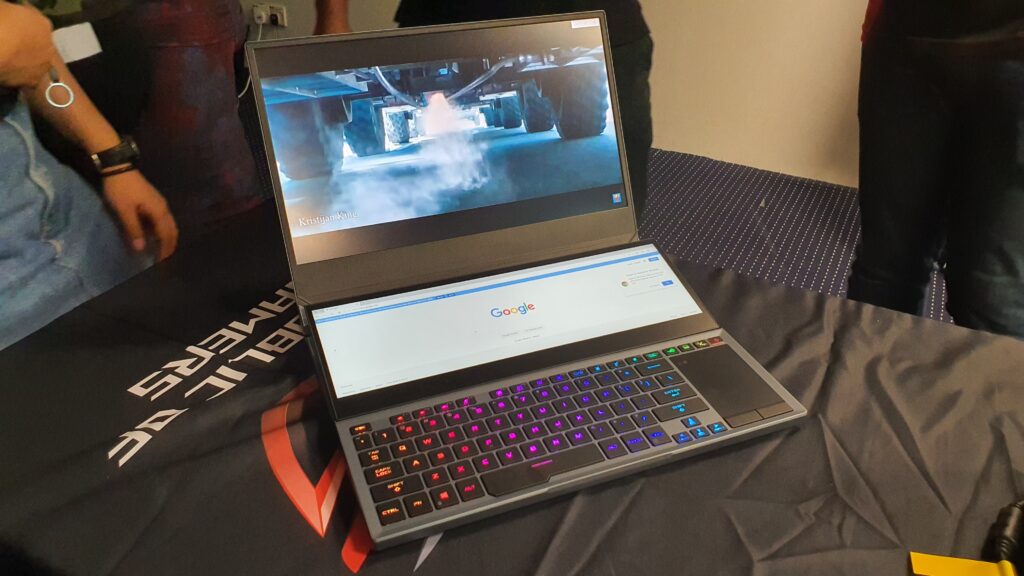 Notebook aficionados familiar with Asus’ line-up will likely find the new Zephyrus Duo 15’s latest unique feature has appeared before in their notebook line-up, specifically their ZenBook Duo range that was released at Computex 2019 last year.

While intended for content creators, the potential of a secondary display wasn’t lost on the boffins at Asus for gaming, which is where the Zephyrus Duo 15 comes into the picture. We managed to take a look at it in an exclusive media preview and to say our jaws dropped was an understatement.

ROG Zephyrus Duo 15 – What’s this secondary ROG ScreenPad Plus about?

The biggest draw to the Zephyrus Duo 15 is its secondary tilted ROG ScreenPad Plus touchscreen. The touch panel measures in at 14.1-inches and has an impressive 3,840 x 1,100 pixel resolution with a 60Hz refresh rate. It’s not Pantone validated for colour accuracy though like the primary 15.6-inch display. 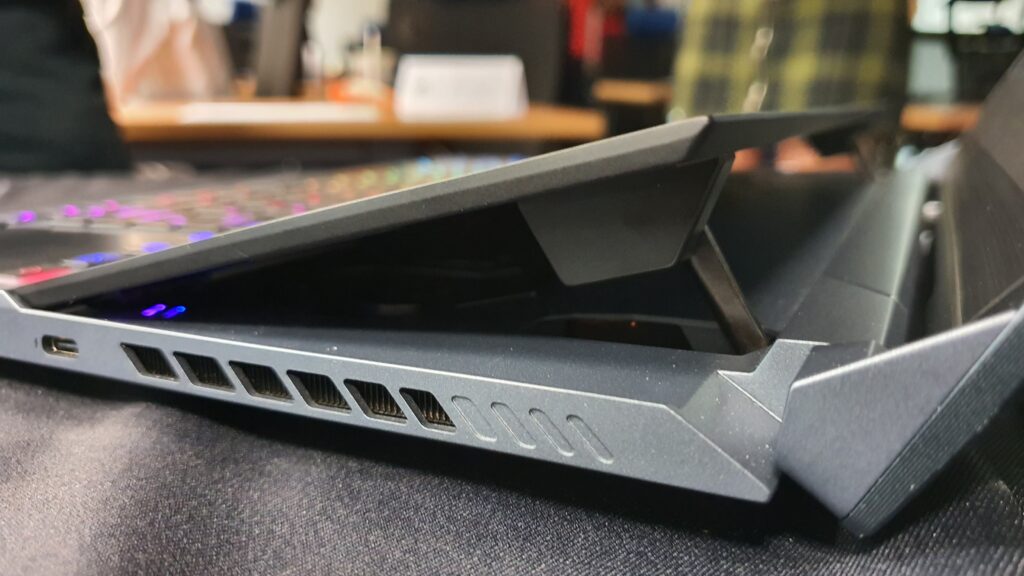 While there were concerns with how it’d get squished or end up jamming on the top lid, it was unfounded as the ROG ScreenPad Plus tilts up and activates automatically with a slight delay when you lift the top lid up in a smooth, elegant fashion via a series of whisper silent gears.

The tilt-up mechanism for the ScreenPad Plus also acts as part of its Active Aerodynamic System (AAS) Plus cooling system as the cooling fans and vents, which integrate a large 28.5mm air intake, are located underneath the ROG ScreenPad Plus, which allows for 30% more airflow than a traditional rear mounted cooling vent. According to Asus, the cooling fans are relatively quiet as well and keep the noise under a decent 46dB even under heavy workloads. 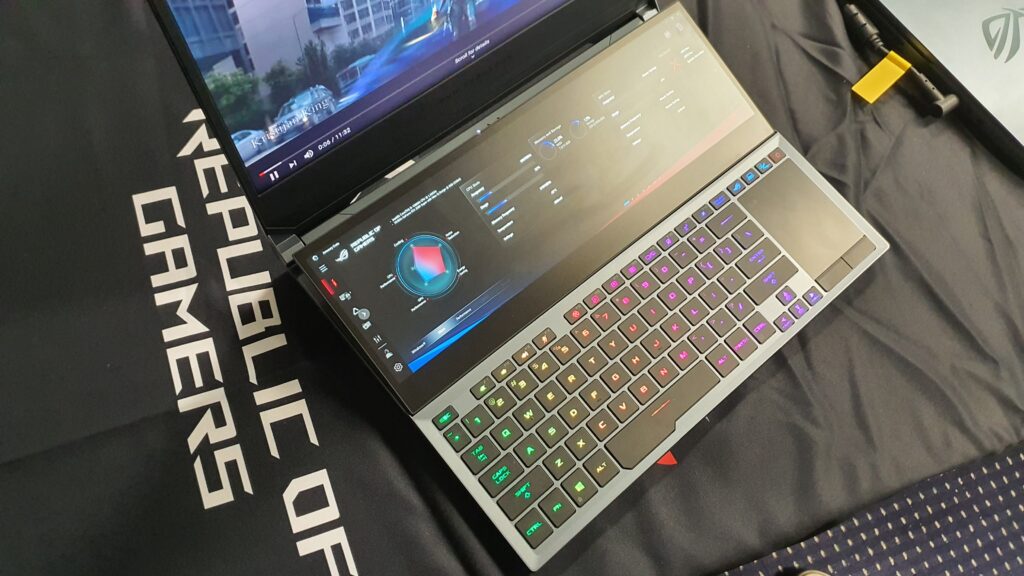 During the preview, Asus showed that the secondary ROG ScreenPad Plus display was as versatile as you can imagine it to be. It’s able to extend the reach of the existing display so that an image or a game can stretch out beyond the primary screen.

It can also be used as a secondary interface for additional features in selected games like Dying Light 2. Other games slated for compatibility or interactivity in some fashion with the secondary ROG ScreenPad Plus include League of Legends, Fortnite and CS:GO at this point in time.

In a more practical fashion, you can use it as a constant diagnostic readout to see ambient temperatures and other key settings in the Zephyrus Duo 15 and to multitask too by popping up a separate browser window or chat box. It’s certainly a more refined application of the innovation first seen in the ZenBook Pro Duo. 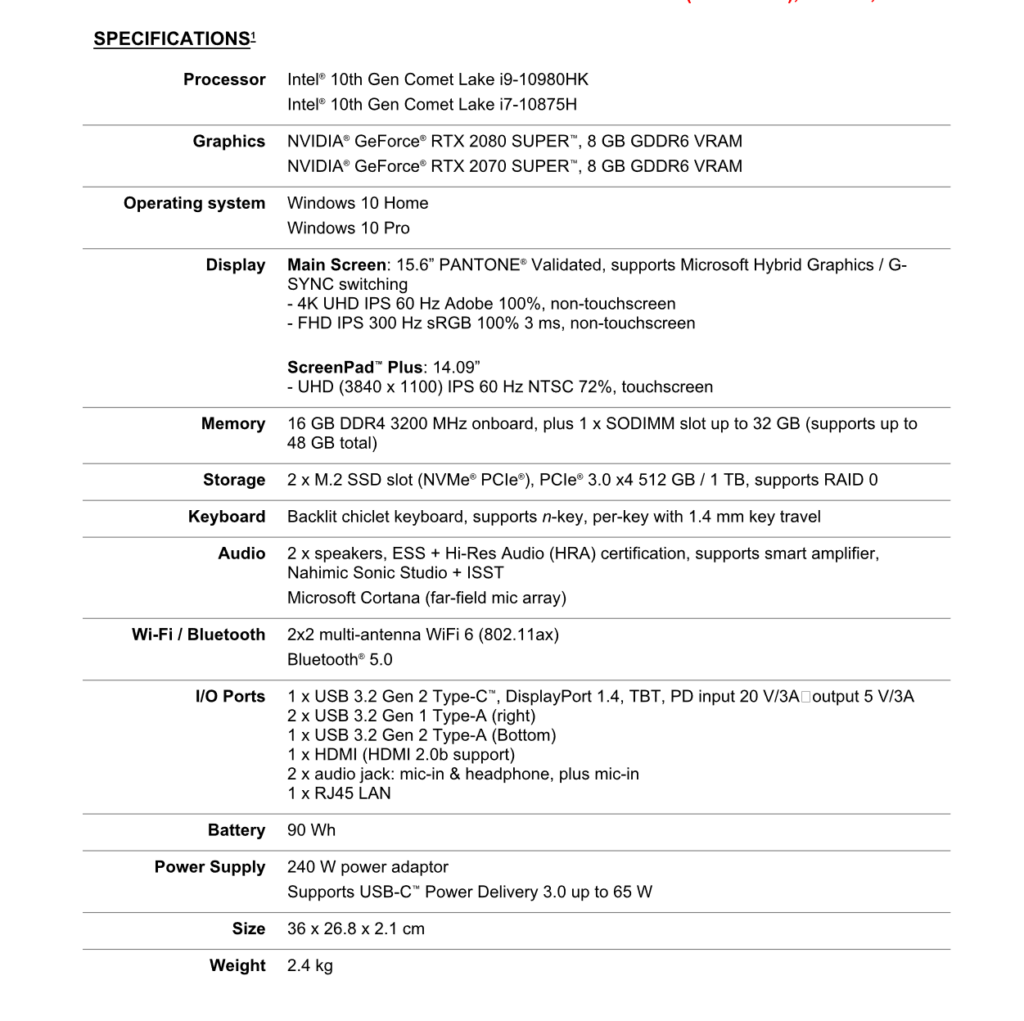 This is paired with a 10th Gen Intel Core i9-10980HK processor with 8 cores and 16 threads as well as the ability to hit speeds up to 5.3GHz on a single core along with an NVIDIA RTX 2080 Super graphics card with 8GB GDDR6 VRAM. Alternatively, you can opt for a 10th Gen Intel Core i7-10875H CPU and an NVIDIA GeForce RTX 2070 Super card with 8GB GDDR6 VRAM. 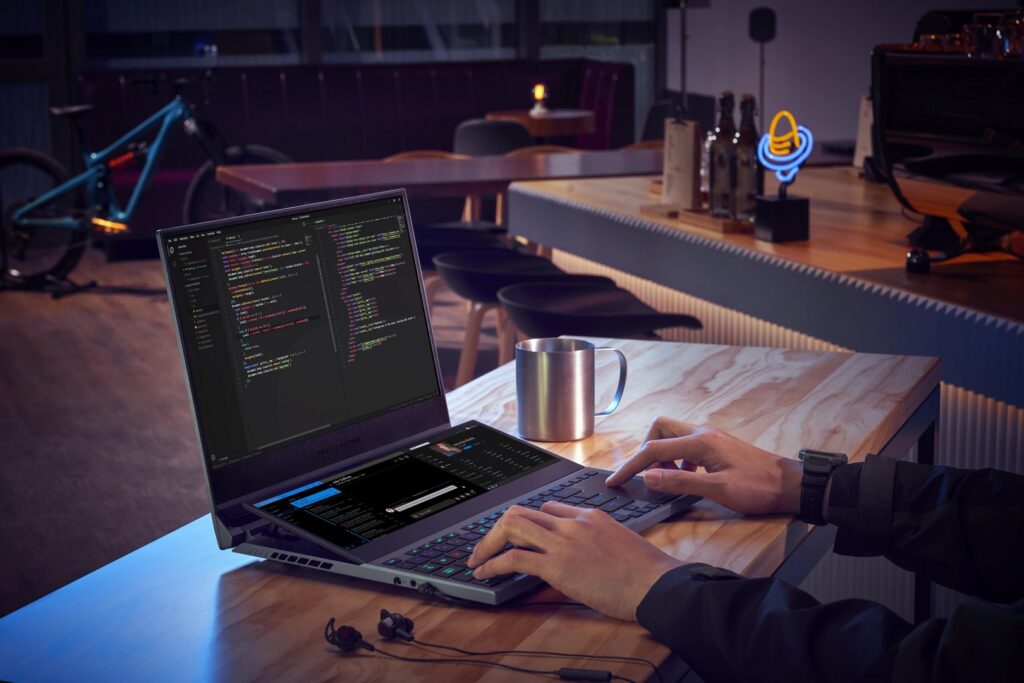 Asus was also keen to impress that the CPU uses Thermal Grizzly’s vaunted liquid metal compound for superior heat dispersion capabilities and which also needs to be applied by hand. They’ve also taken pains to ensure superior cooling even with such a thin chassis by adding in five heat pipes that draw heat into four heatsinks as part of the aforementioned AAS.

The ROG Zephyrus Duo 15 also packs 16GB DDR4 3,200MHz RAM along with a spare empty SODIMM slot for a maximum possible allotment of 32GB RAM. Storage needs are sorted out by a pair of M.2 SSD slots which can be used in Raid 0 configuration with up to a theoretical combined maximum of 2TB of storage. 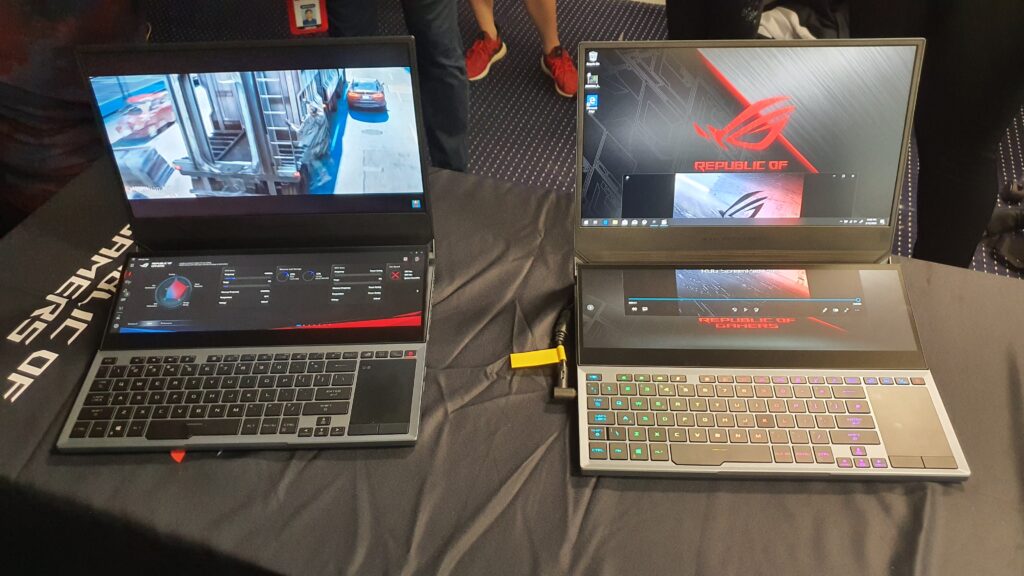 Power is provided by a large 90Wh battery and the ROG Zephyrus Duo 15 has a full suite of ports including a HDMI 2.0b for porting a feed to 4K monitors, a USB 3.2 Gen 2 with Thunderbolt 3 and Power Delivery along with a DisplayPort 1.4 port. It also has WiFi 6 (802.11ax) and a Gigabit Ethernet jack at the rear. 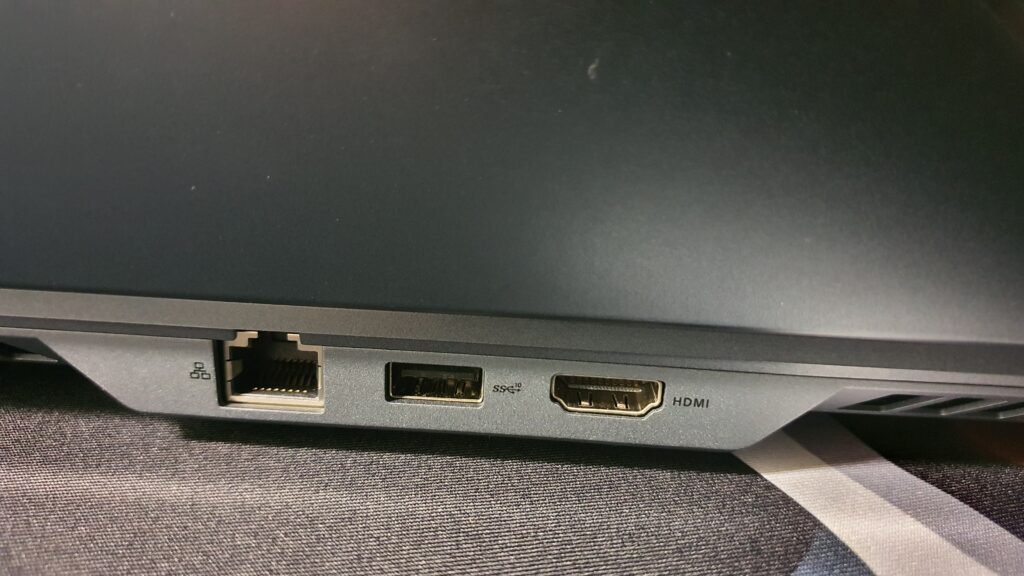 Seeing as it’s a gaming notebook, they’ve also kitted it out with stereo speakers and the ESS Sabre DAC for Hi-Res audio support which ought to make music and gaming a real treat. The fact that they’ve managed to shoehorn all this tech into a chassis that’s just 20.9mm thin and just 2.4kg is quite an achievement indeed.

There’s no pricing or availability yet for the ROG Zephyrus Duo 15 but we’ll keep you updated. In the meantime you can keep an eye on the official Republic of Gamers page for updates here. 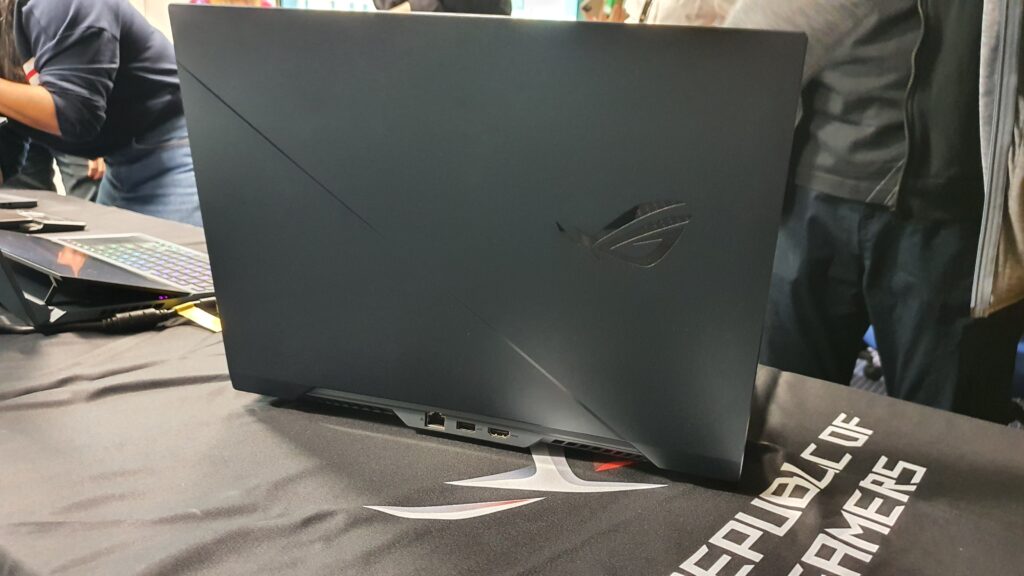