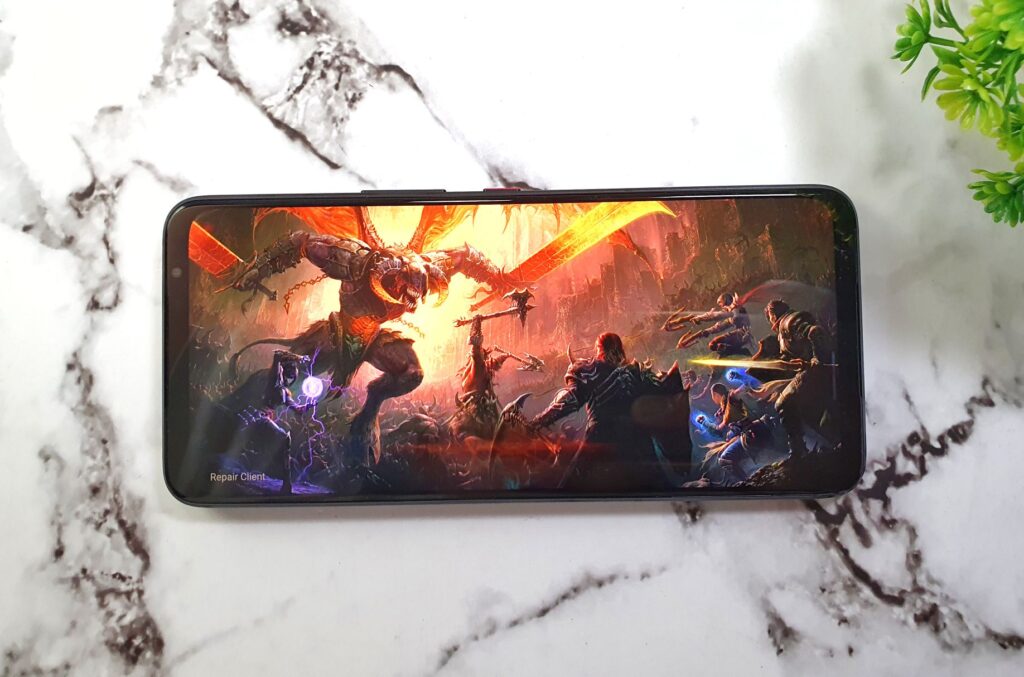 When it comes to gaming phones you’ll be absolutely spoiled for choice with a variety of gaming-centric models festooning the market but by and large, the ROG Phone series has been the trailblazer with cutting edge performance and innovative features added every year that astounds even hardened gamers. Now in its sixth incarnation, the titular ROG Phone 6 aims to dominate the competition again with best-in-class gear and some truly innovative features but is it worth its lofty price tag? Our ROG Phone 6 review puts it to the test to find out! 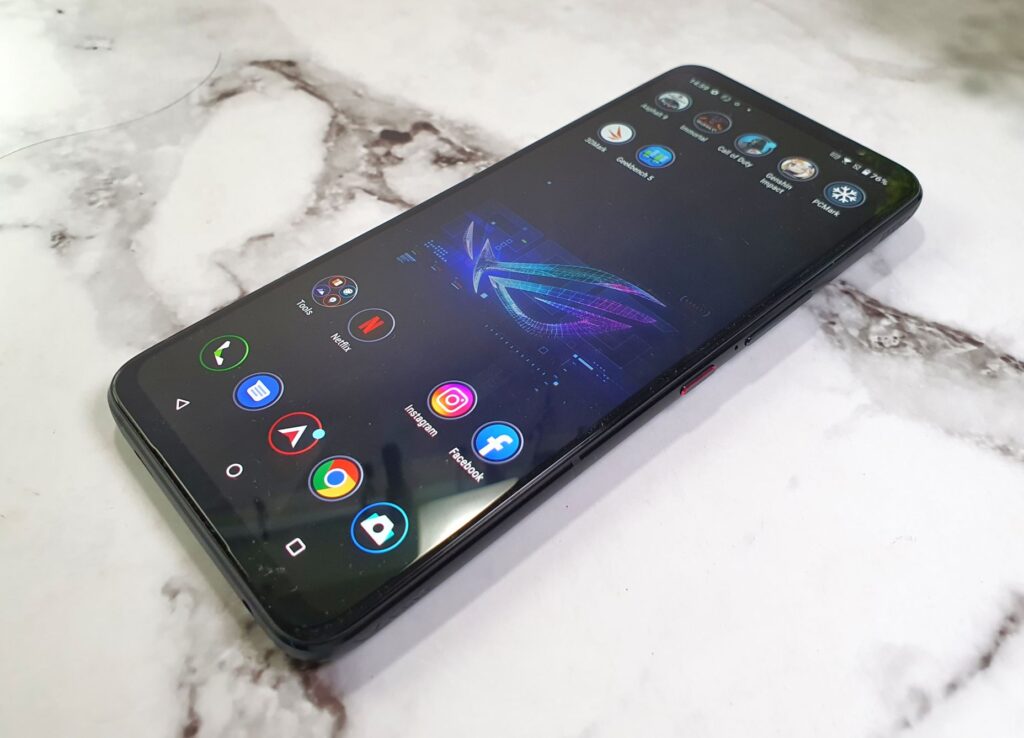 The ROG Phone 6 by and large retains a similar form factor to its predecessor the ROG Phone 5 with bottom and side-mounted USB ports for landscape-style gaming, stereo speakers, a high quality AMOLED display, a humongous battery along with cutting edge hardware crammed into a chassis with a distinct cyberpunk aesthetic that won’t look out of place in Cyberpunk Edgerunners.

In Malaysia, ASUS is issuing the ROG in two different flavours with a high end ROG Phone 6 Pro and a more mainline and affordable ROG Phone 6. The Pro version is otherwise functionally identical to the standard version save for the inclusion of a ludicrous 18GB RAM and 512GB storage along with a rear-mounted pAMOLED display to post icons and messages on demand. The standard ROG Phone 6 comes in two sub variants for Malaysia with a more affordable RGB backlit ROG logo on the backplate, either 12GB or 16GB RAM and either 256GB or 512GB of storage.

Our ROG Phone 6 review unit is the base variant with 12GB RAM and 256GB of storage which is plenty for all but the most demanding gamers.

The layout is optimised primarily for usage in landscape orientation for gaming which is the primary reason why ROG implemented an additional USB-C charging port in the left side which works out to the bottom if you’re holding it landscape-style for easier charging.

The front features a massive 6.78-inch Samsung-manufactured AMOLED screen with a fast 165Hz refresh rate. Rather than plonk in distracting cutouts and bezels, they’ve gone for the safe approach of having slightly thicker side bezels to accommodate the front-facing 12MP selfie camera and dual speakers flanking the display.

On the right of the phone you get a power button and volume rocker along with two air slider triggers that lend the ROG Phone 6 its unique edge as they function as shoulder buttons with haptic feedback to make them feel like real buttons. The top of the phone is bare but the base of the phone hosts a 3.5mm audio jack and the second USB-C charging port. 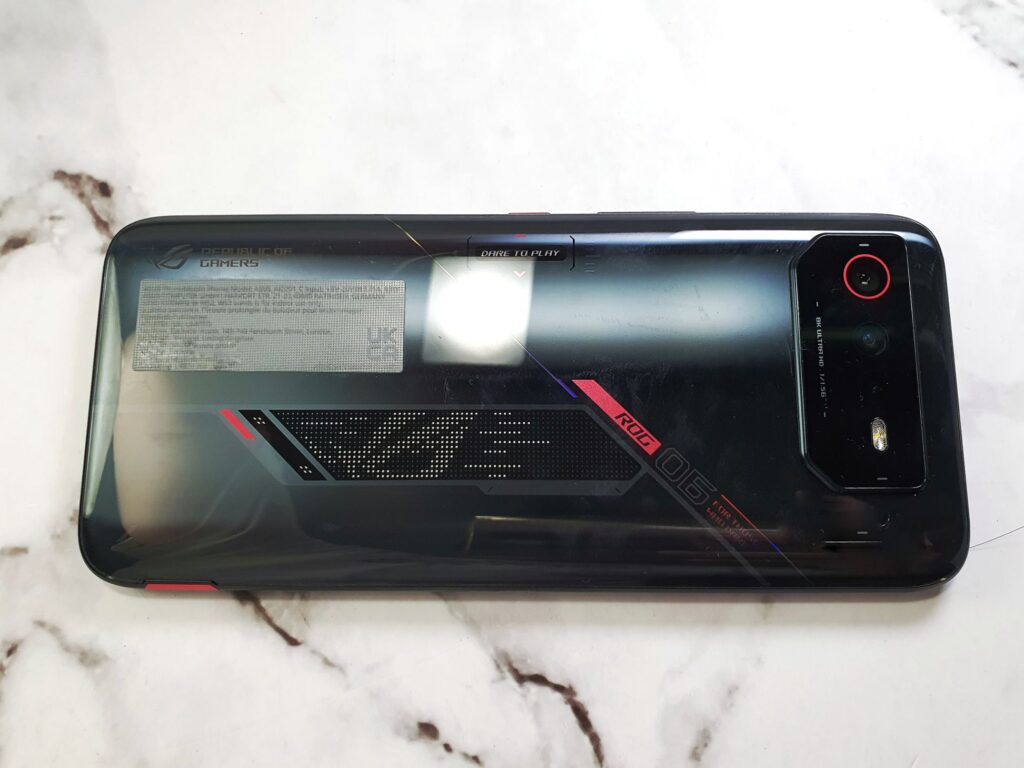 The backplate of our ROG Phone 6 review unit comes in a shade of black with metallic red highlights and ROG iconography along with an RGB backlit ROG logo but a white paint job is also available. Plonked in the corner is a hexagonal camera housing that houses the phone’s triple camera setup.

Much like its predecessor, the ROG Phone 6 is a hefty phone, tipping the scales at 239g but what you pay for is a phone with every inch of its design devoted to sustained, high-intensity mobile gaming with a huge 6,000mAh battery split into two 3,000mAh cells and hefty cooling to keep the phone running even with extended gaming sessions. Of note is that the ROG Phone6 is the first phone in the series to have IPX4 water resistance which means it will survive a splash or two of water. 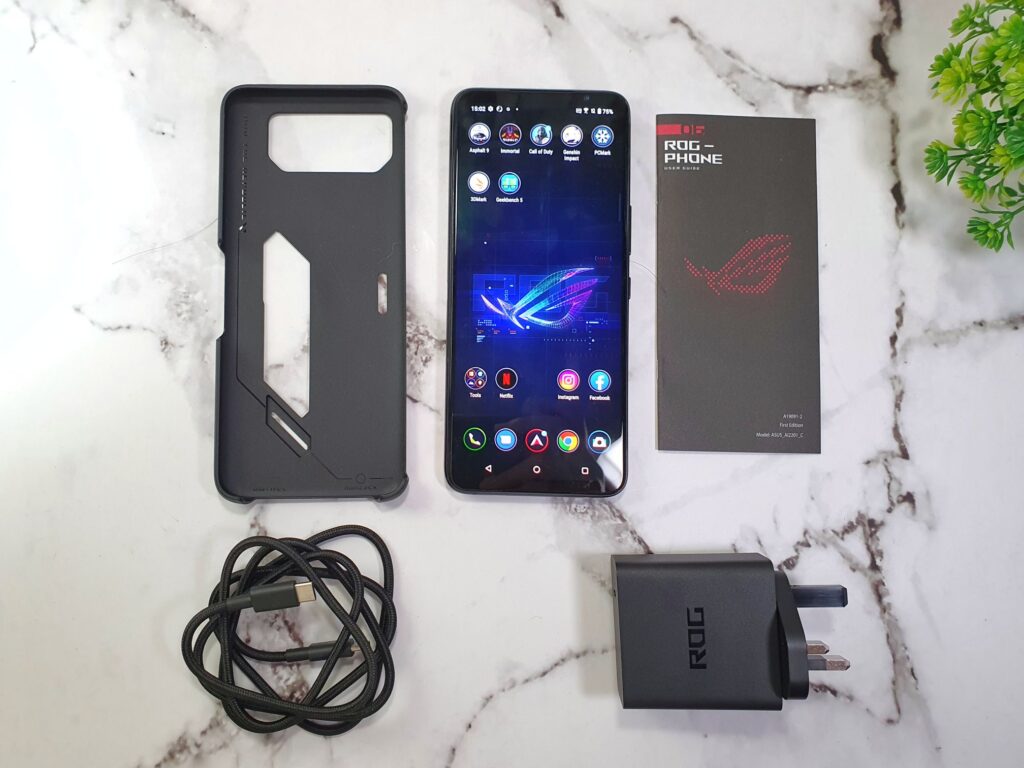 In terms of extra kit, the ROG Phone 6 comes with a solid assortment of the essentials with a 65W fast charger, a USB- cable, a protecting casing and, oddly enough, a card to initiate an augmented reality (AR) tutorial to get started with the phone.

The base version of ROG Phone 6 is armed for bear to tackle any Android game currently in the market. While many other phones pack a Snapdragon 8 Gen1 processor and a similar amount of RAM and storage, the ROG Phone 6 gains the decisive edge as it has interior layout and sufficient cooling for sustained gaming.

Rather than plonking the CPU in the corner, ASUS has opted to slap it right in the middle out of reach of any fingers and then added in a 30% large vapour chamber than its predecessor along with critical components sandwiched between two graphite sheets while also using a new technique to minimise the air gap between the printed circuit boards for more heat efficiency. Here’s how the phone stacks up on paper:

What this works out to is that heat generating components are plonked in the middle of the phone in landscape mode and vented efficiently away from it. Where the phone comes into its own is when you add the optional AeroActive Cooler 6 attachment that adds a massive cooling fan that relies on the Peltier principle and which is powered by the side-mounted USB-C port off the ROG Phone 6’s main battery capable of cooling the phone’s surface up to 25°C according to official specifications. 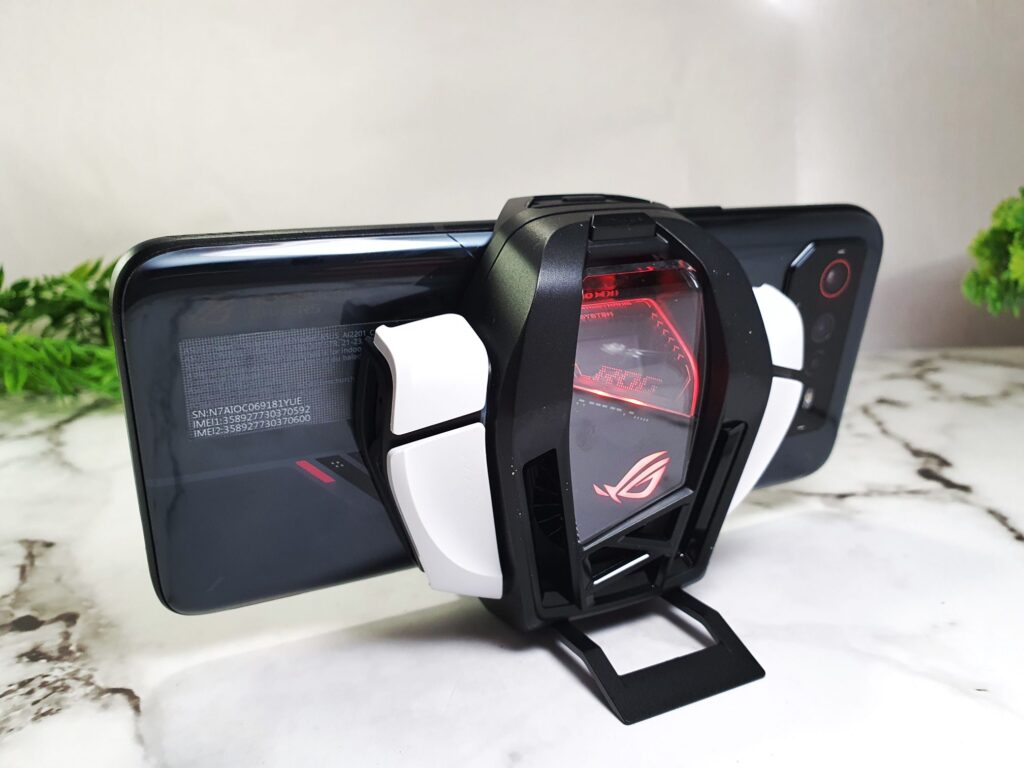 ROG Phone 6 review – The phone features an optional AeroActive Cooler 6 attachment that latches on to the side USB-C port to offer added cooling, as well as additional buttons

The ROG Phone 6 also has the addition of their Armoury crate firmware that allows it to run at a normal speed and a maxed out ‘X mode’ which ramps up the processor performance significantly for gaming. In fact, the phone is smart enough to recognise games and turns it on automatically without direct intervention. However, you need the Aeroactive Cooler 6 attachment to truly maximise the potential performance as it enables an additional, more powerful ‘X mode+’

When subjected to synthetic benchmarks in standard mode and with X mode activated and with X Mode+ by adding in the AeroActive Cooler 6, here’s what our ROG Phone 6 review sample scored.

Even in standard mode, the ROG Phone 6 offers impressive performance with the ability to play Call of Duty Mobile and Diablo Immortal on maxed out settings. Without the AeroActive Cooler 6 and on X mode, the phone does get somewhat hot but the intelligent design ensures that the sides where your fingers are located are away from the heat for the most part and the phone remains comfortable to hold even after a couple of hours.

The addition of the AeroActive Cooler 6 attachment is primarily for extended game play sessions where the cooling ensures sustained high performance from the phone. It’s not strictly necessary and the ROG Phone 6 is more than capable of tackling short spurts of intensive gaming.

The main star of the show is the ROG Phone 6’s display which offers a level of responsiveness and image quality that’s impressive to behold along with excellent visibility even when outdoors. While the display is capable of up to 165Hz refresh rate not all games are capable of supporting it and for the most part, most popular games like CODM max out at 60Hz which makes it somewhat overkill.

The dual front facing speakers, each of which are fitted with a Cirrus Logic CS35L45 mono amp are easily the best mounted in a phone with the volume, detail and thumpy enough bass to punctuate weapons fire and music.

Of note here are the Air Triggers on the upper edges of the phone which correspond to where shoulder buttons would be on a console. It takes some time and effort to assign it to a game you want to use it on but the results are satisfying indeed with additional tactility as you’re able to assign multiple controls to it ranging from taps, sliding your finger along to swiping inwards or outwards with a grand total of up to 18 possible assignable inputs on the Air Triggers alone. The sheer wealth of control customisation options alone here are truly a gamer’s delight though a certain amount of patience is needed to realise its true potential.

In terms of battery life, the ROG Phone 6 is absurdly good. It splits power between two 3,000mAh batteries for a grand total of 6,000mAh and if you’re using it for normal non-gaming duties, it’s easily able to last two days of use. In fact, the PCMark Battery Life benchmark scored a ridiculous 23 hours and 27 minutes of use in standard mode. If you’re using it for non-stop intensive gaming, you’re able to get several hours in and the side-mounted USB-C port lets you continue charging and gaming. 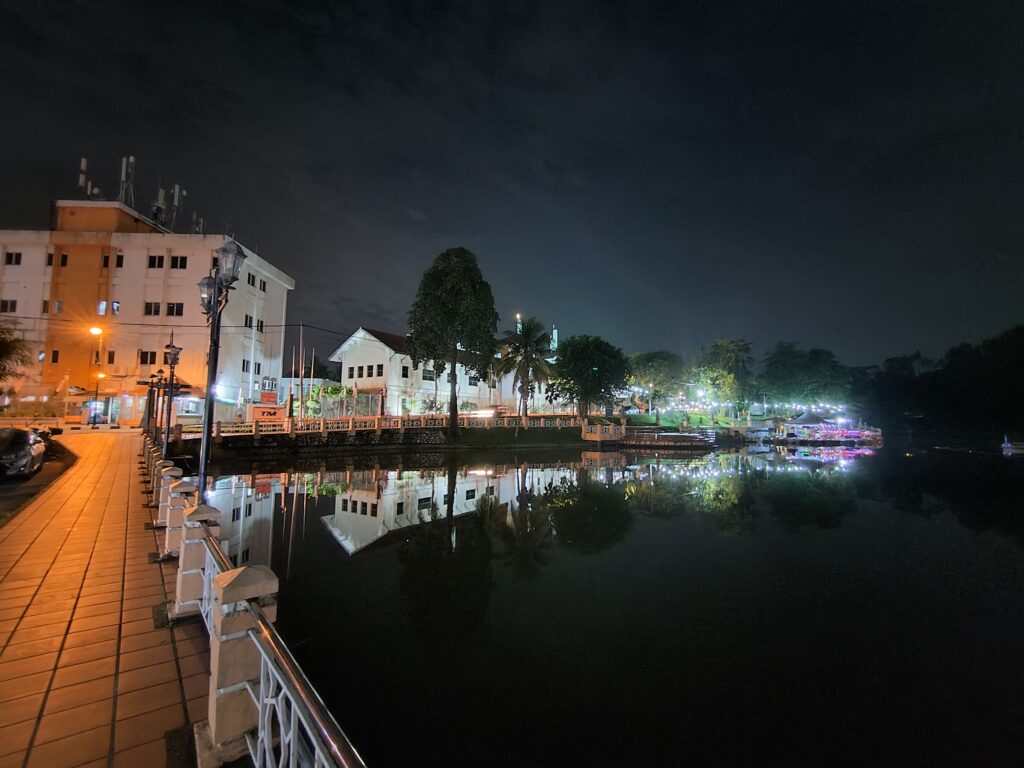 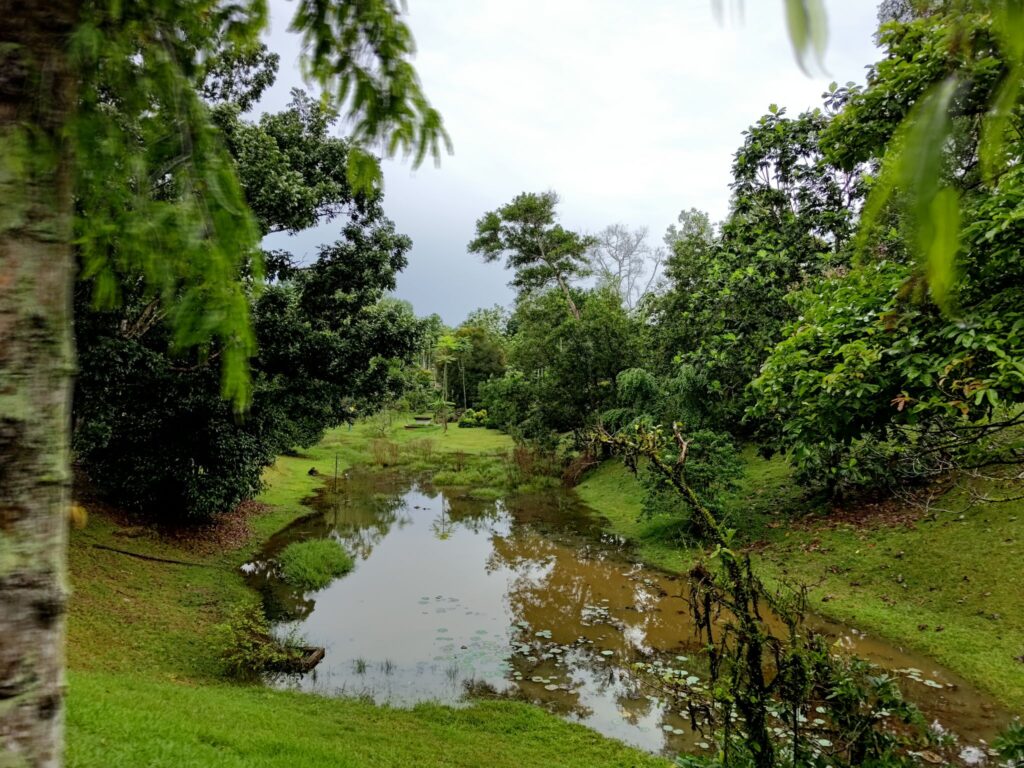 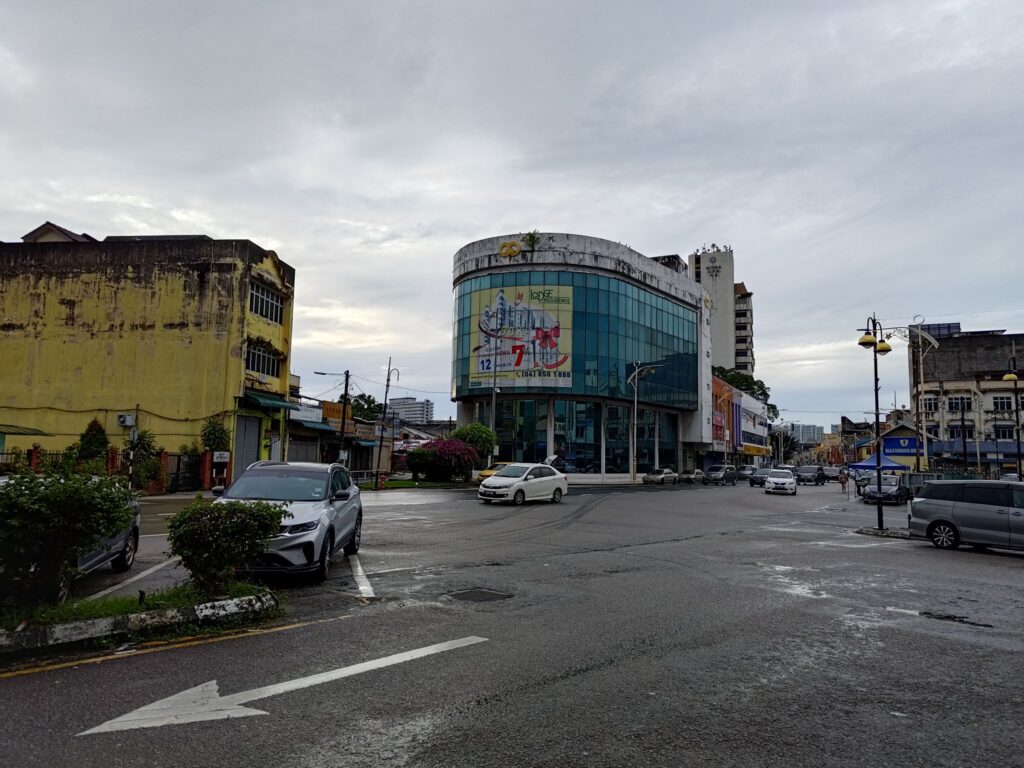 Perhaps the biggest quibble here is its unremarkable triple camera array with a 50MP primary camera that has autofocus but lacks OIS but – surprise- has the ability to capture 8K@24fps video. This is paired with a 13MP ultra wide angle camera and a 5MP macro camera. Overall performance is good in daylight conditions but photos and videos aren’t the ROG Phone 6’s main calling card.

Should you buy the ROG Phone 6

If you’re looking for a phone that prioritises gaming over other concerns, the ROG Phone 6 beats all comers with a top of the line display, superb performance along with the necessary cooling for sustained gaming experiences as well as excellent battery life. 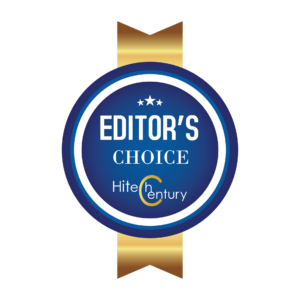 If you’re able to live with the middling cameras and want a best-in-class mobile gaming experience in a phone, the ROG Phone 6 ought to be tops on your list. 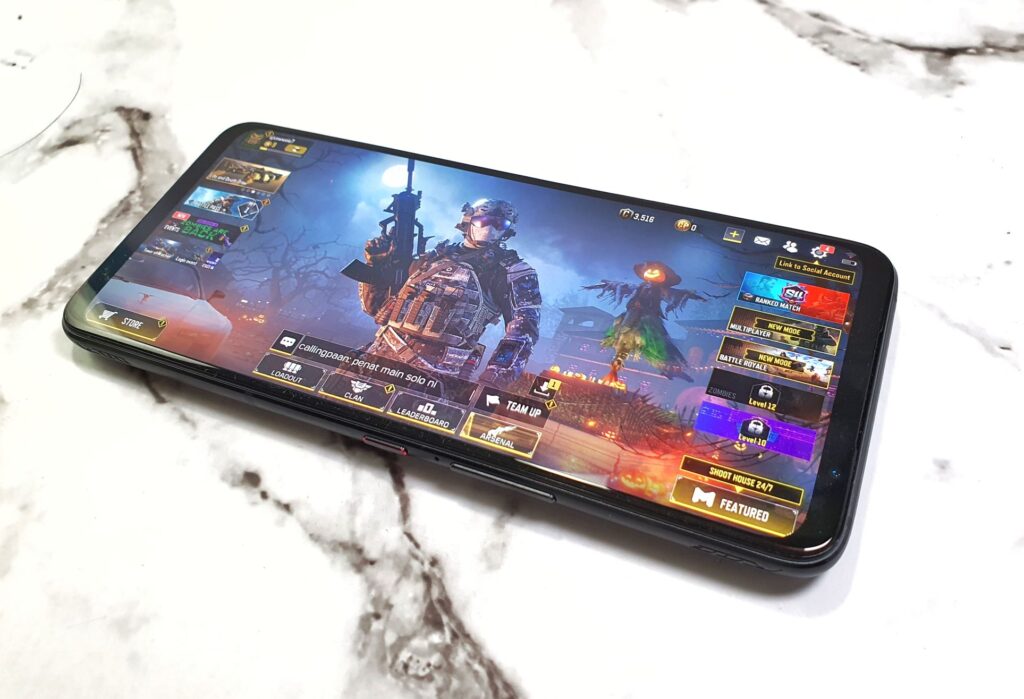 The ROG Phone 6 epitomises what a gaming phone ought to be with an excellent display, fantastic speakers, a slew of gamer centric features and superb performance. If you’re a serious Android phone gamer, this is the de facto gaming phone to own.

Gets hot when gaming