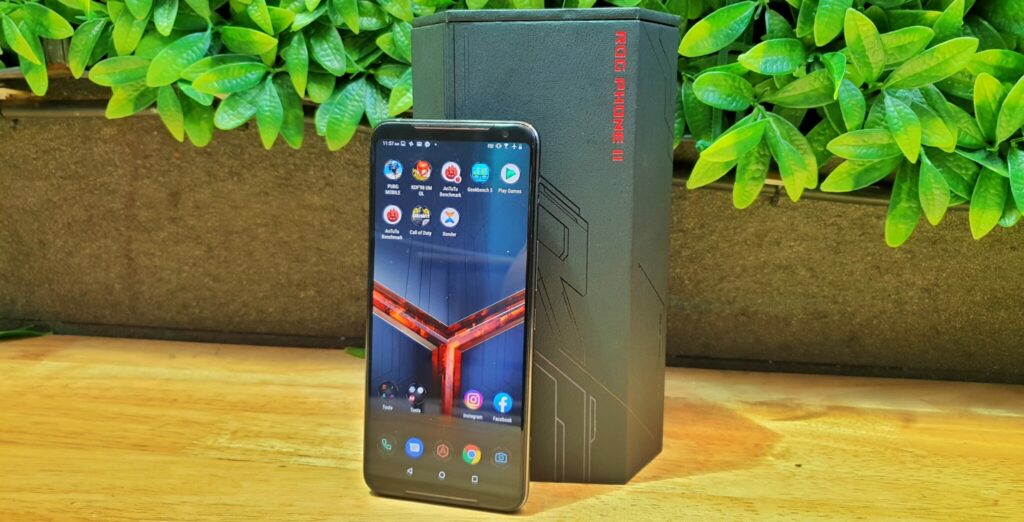 Many smartphones in the market usually consider their capabilities as gaming platforms as something of an afterthought but the Asus ROG Phone 2 goes all out to make it its raison d’etre. The successor to last year’s ROG Phone, the ROG Phone 2 bears the same aesthetic hallmarks as its predecessor but dials the hardware to 11. 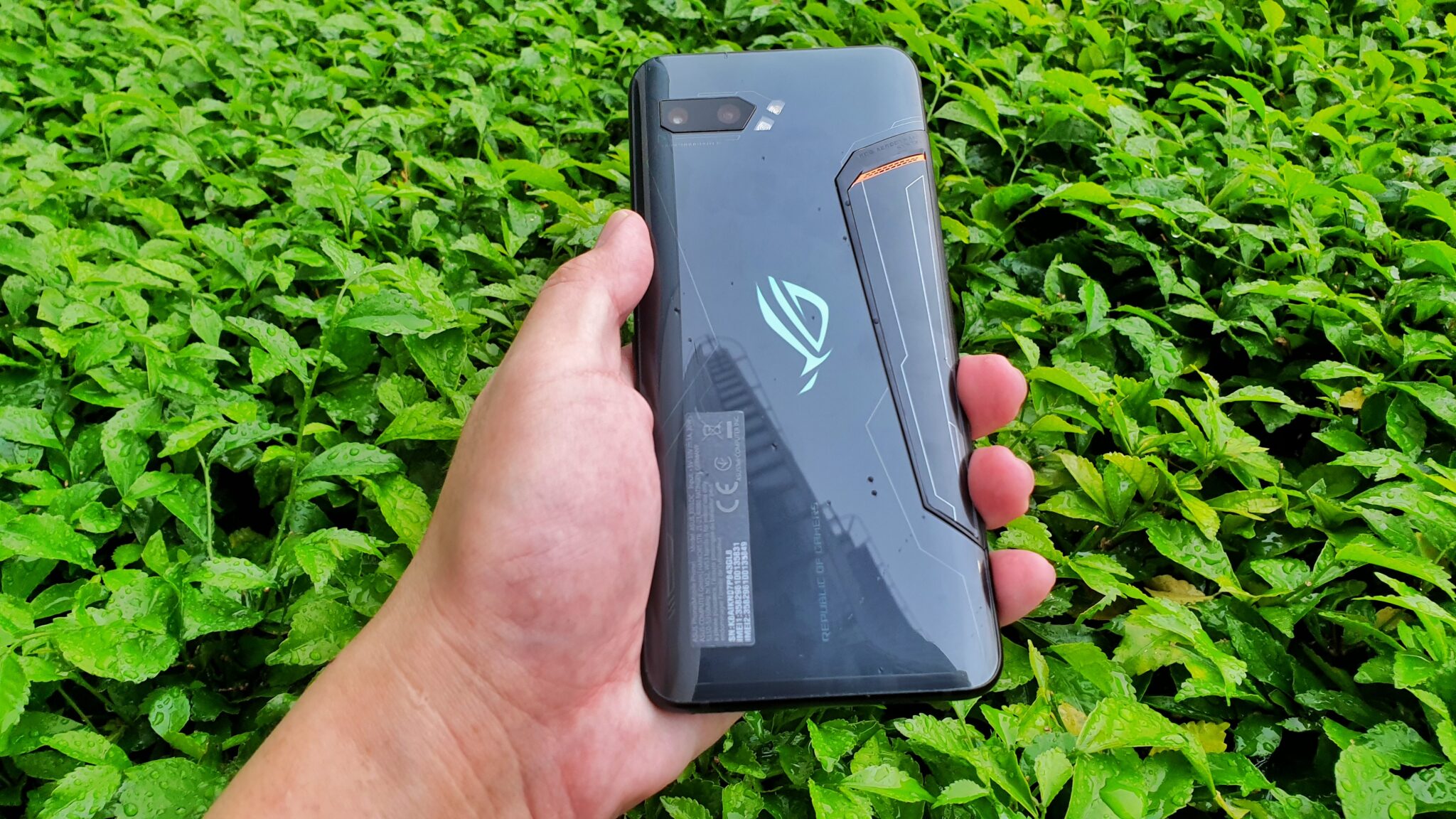 In the case of the ROG Phone 2, form follows function and the phone has been designed to prioritise gaming over all other concerns with several features that don’t even exist in competing phones. 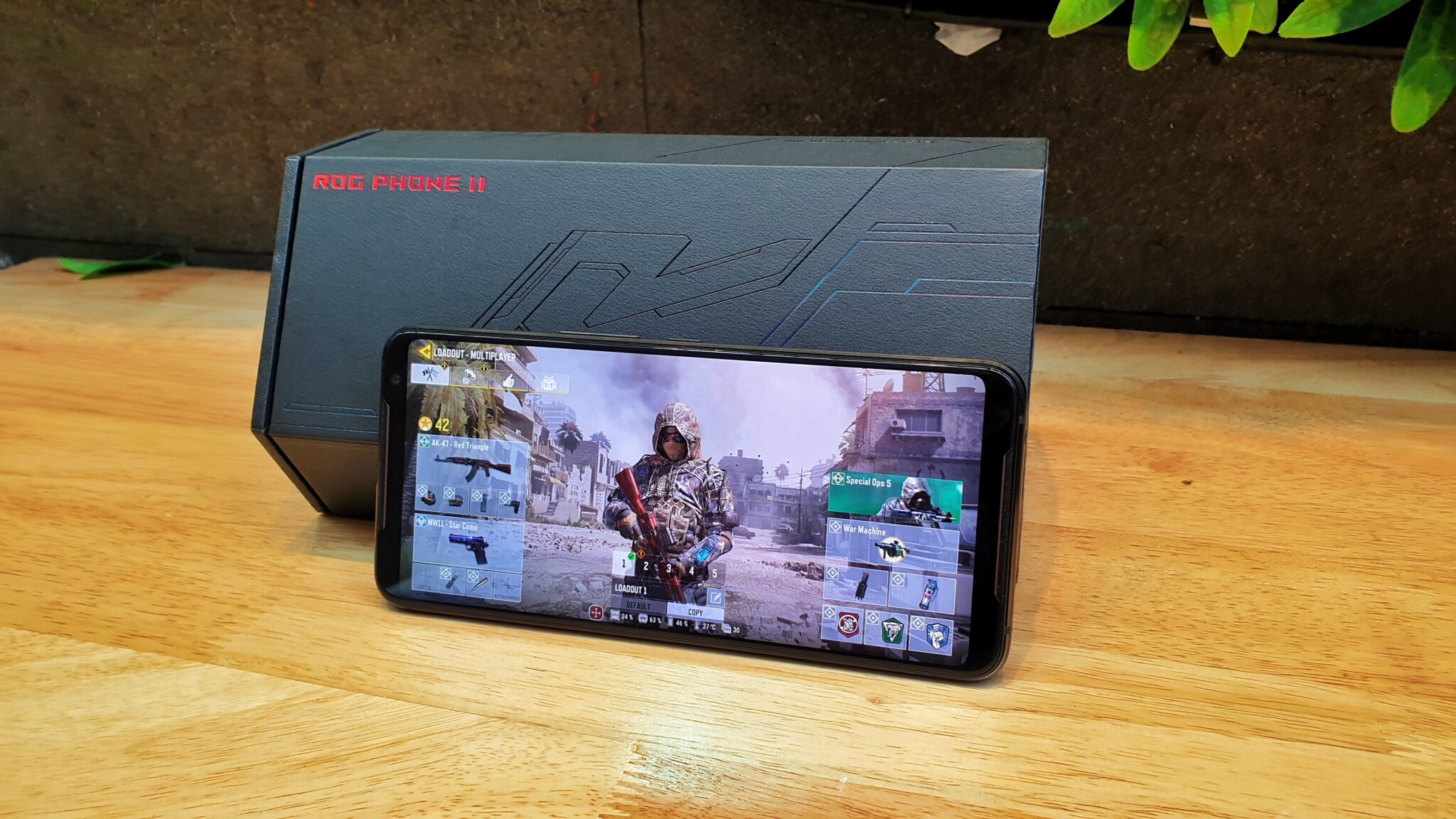 To that end, it sports a pair of haptic feedback ultrasonic air triggers on one edge of the phone which are intended to be used landscape-style where your index fingers would naturally rest, a side mounted USB Type-C port for charging in landscape mode, a beefy cooling system that includes a vapour cooling chamber to vent heat on the backplate and, more importantly, an AMOLED display with a silky smooth 120Hz/1ms refresh rate that is also colour calibrated. 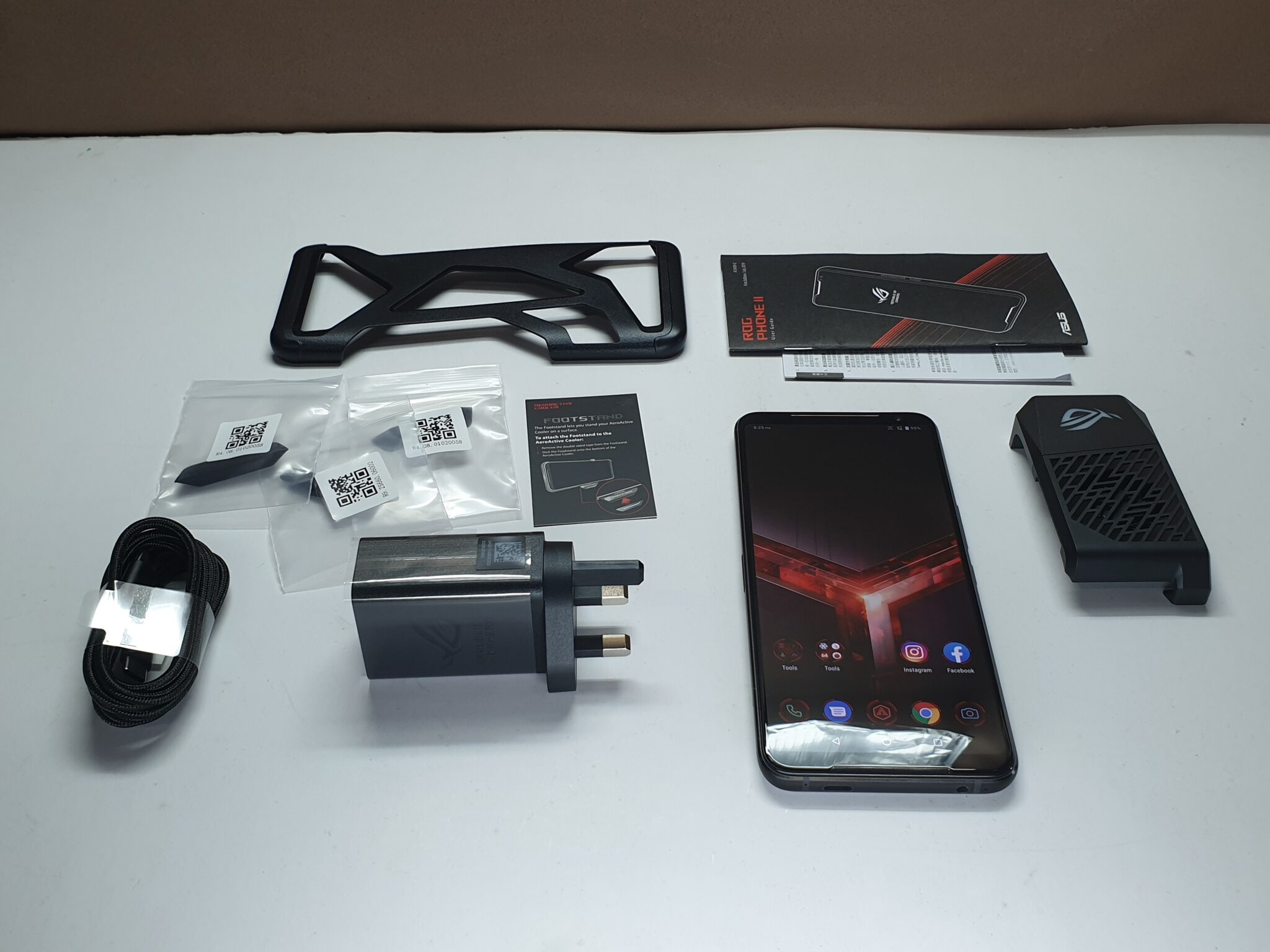 Previously, we unboxed the ROG Phone II and delved into what it had in the box along with some key differences in terms of specifications with the overseas Tencent edition. In Malaysia, we’re getting the highest end variant of the lot with either 512GB or 1TB of storage depending on how deep your pockets go.

The rest of the hardware with the Asus ROG Phone II consists of the Qualcomm Snapdragon 855 Plus processor paired with 12GB RAM, an Adreno 640 GPU and WiGig 802.11ad/60GHz wireless display support, Bluetooth 5.0 and WiFi 802.11a/b/f/n/ac support. Even as a normal phone, this gives it very beefy specifications indeed.

As a gaming phone, the ROG Phone 2 packs a ton of features and enough pixel crunching hardware to handle any mobile game at maximum settings while rendering it relatively future proof down the road for a good while yet.

User interface with Performance mode on

User interface with Performance mode off

Much like its predecessor, the ROG Phone 2 also has a Performance mode that unleashes the full potential of the phone while also maxing out its cooling capabilities with a commensurate tradeoff in terms of faster draining of the battery. We benchmarked our usual set of tests with both Performance mode on and off and there was a marked difference between both. For best practice, you’d likely leave it off to save on battery life but it’s merely a press of a button to fire it up Performance mode again.

PCMark with Performance mode off

PCMark with Performance mode on

Geekbench 5.0 with Performance mode off

Geekbench 5.0 with Performance mode on

For gaming, and entertainment, the ROG Phone 2’s display is excellent with a gratifyingly swift refresh rate and excellent colour rendition as well as good clarity even under sunlight. Rather than cramming in as many pixels as possible, the ROG Phone II keeps it at FHD+ resolution but radically ramps up the screen refresh rate and colour accuracy to a whopping 120Hz with a 1ms response time while having a colour accurate screen with a deviation of Delta E < 1. Keeping it at FHD+ also helps with battery endurance as well and for practical purposes, you aren’t going to see much difference at sharper resolutions unless you peer at each pixel up close.

ROG Phone 2 with 3DMark performance on

Rogue One’s dark backgrounds showed up wonderfully on the display and the vibrant costumes and palettes of The Fifth Element looked fantastic on the ROG Phone II’s display. By default, the phone display is set to 60Hz refresh rate and the first thing you ought to do is to crank it all the way up to its maximum 120Hz and there’s a noticeable difference in not only gaming but in everything else you do on the phone including flitting about the menus and browser, rendering every interaction almost unnaturally fluid and smooth. 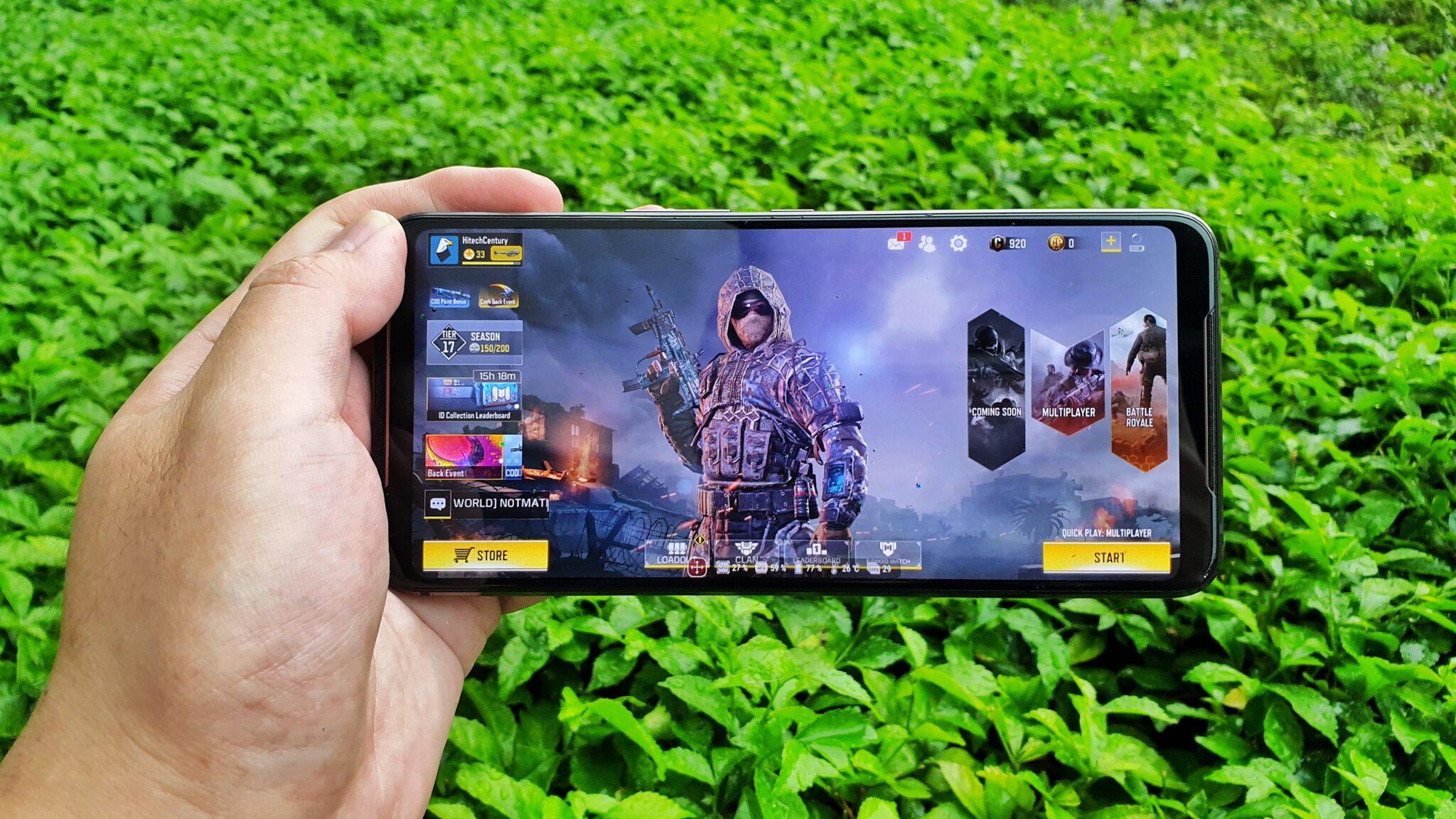 The excellent display is paired with a pair of front-facing stereo speakers with DTS:X Ultra tech for louder, deeper and richer audio. Incoming fire on Call of Duty Mobile sounding menacingly loud while subtle footsteps were easily audible. Movies were also given due justice and something with a ton of ordnance going off like Mad Max: Fury Road sounded fantastic onscreen.

While you will use it in its role as a phone in a vertical position, you’ll by and large be using the ROG Phone 2 in landscape style for most of your gaming sessions like PUBG, Asphalt 9 and the recently launched Call of Duty Online.

In landscape mode, you’re able to take advantage of the aforementioned ultrasonic Air Triggers, working in much the same fashion as the shoulder buttons on a console controller. The side mounted secondary USB Type C port comes into play here as it not only allows you to continue charging your phone when gaming but it also interfaces with the other official accessories that augment the ROG Phone 2 like their Kunai controllers and more.

There’s a markedly improved and swifter response from last generation’s version of the Air Triggers. Once you’ve gotten a taste of how the ultrasonic Air Triggers work, you’ll likely won’t be able to play games without it as they give a distinct advantage for multi-button games like COD and PUBG. 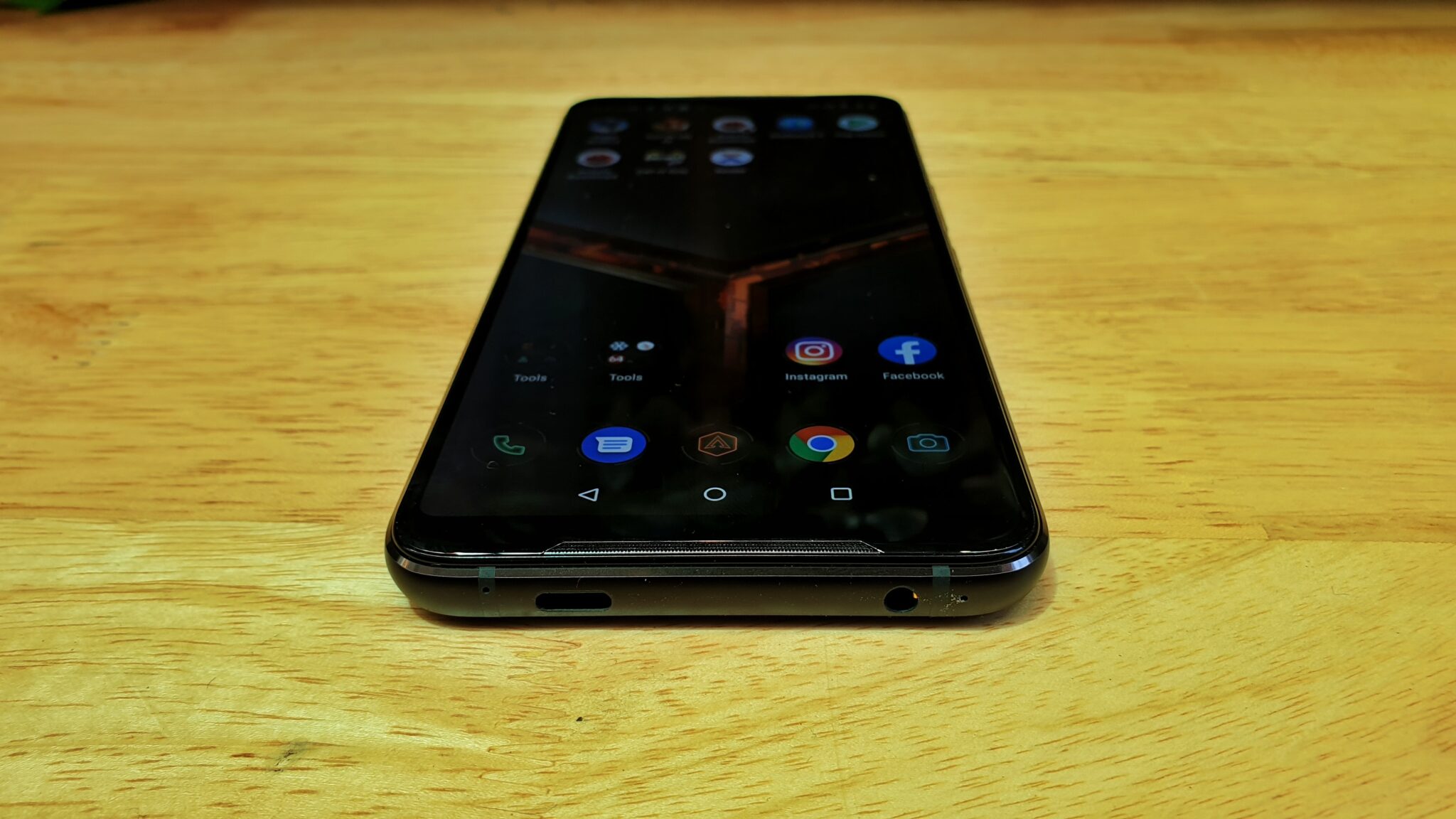 Befitting its role as a gaming phone, we threw the most popular and demanding games at it and ran it at maximum settings. Call of Duty Mobile ran at 60fps and ran in a consistently smooth fashion even after four hours of nonstop gaming. We also put it through the wringer with PUBG at the highest settings and Asphalt 9 too, all of which it handled in a delightfully competent fashion. Simpler, less demanding games like Clash Royale and the like barely even tax the processor. One things for sure, this will run everything game on the Google Play store and then some.

The pickle here is there really aren’t that many games that would take full advantage of what the ROG Phone 2 offers bar the usual competitive ones like PUBG, Mobile Legends the new Call of Duty Mobile, Freefire and the like.

With an overwhelming emphasis on gaming, the ROG Phone 2 understandably eschews the triple and quad camera arrays that are so in vogue today and instead opts for a somewhat spartan rear dual camera array that consists of a primary 48-MP camera using a Sony IMX 586 sensor and secondary 13-MP camera with a 125-degree ultrawide angle lens. Combined, the array has the ability to capture 4K@60fps and take huge 48-MP snaps at your whim. It also has 2x digital zoom and a 1080P@240fps mode. The front-facing single 24-MP selfie camera maxes out at 1080P video and has the usual slew of beautification modes. 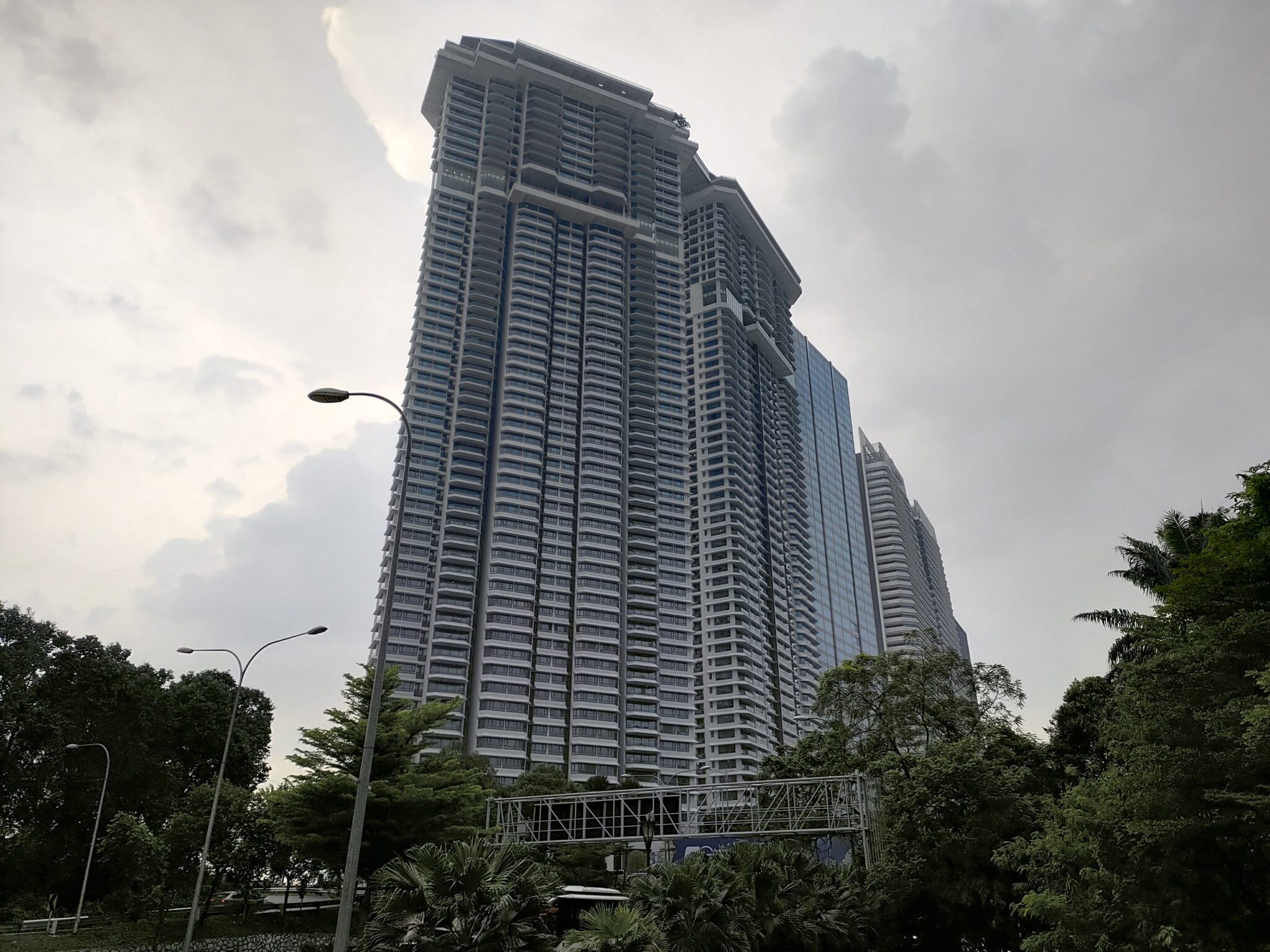 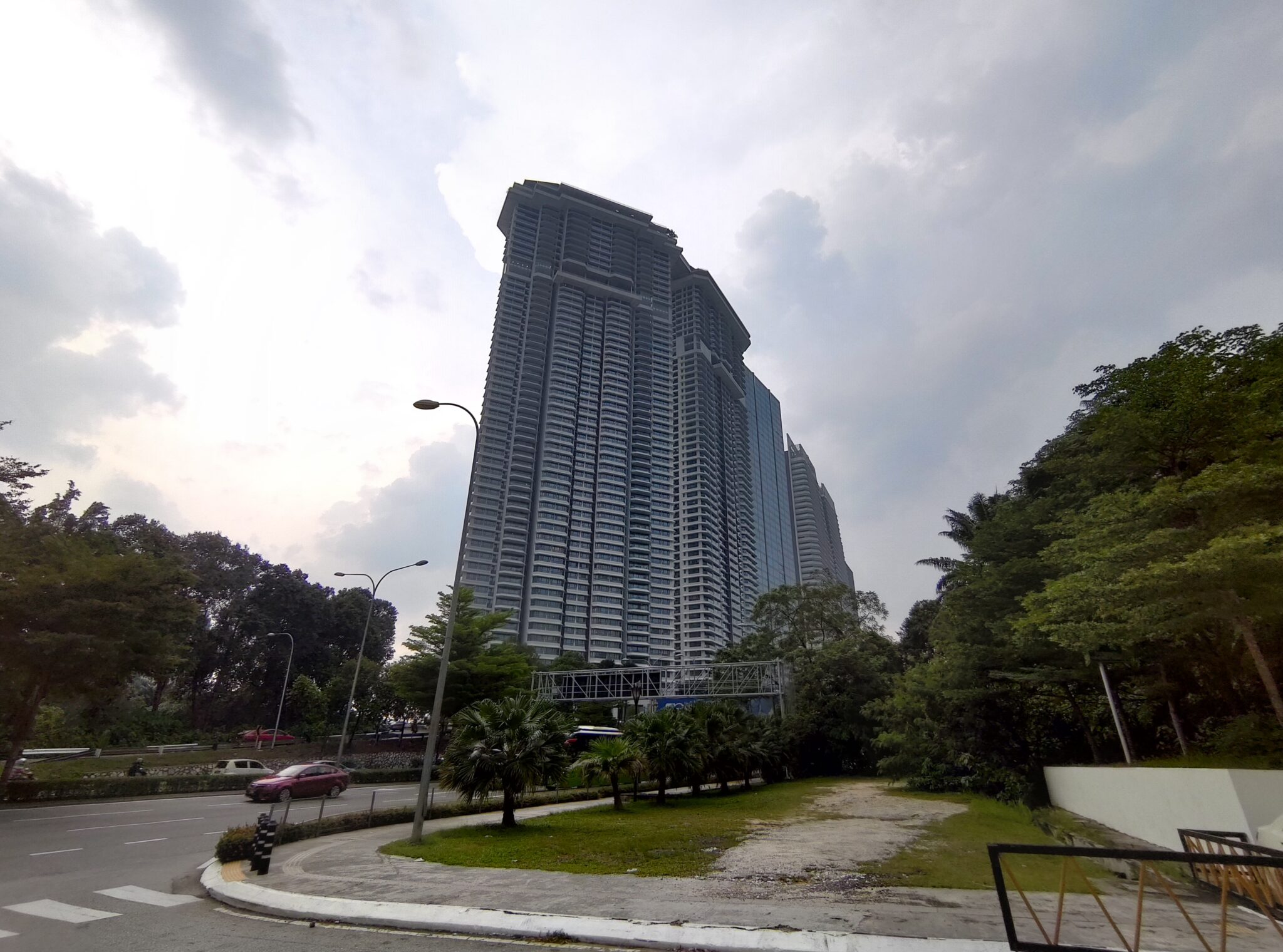 Wide angle camera on the ROG Phone 2 under daylight conditions

Performance for the cameras is serviceable with good daylight performance on both the primary rear and wide angle camera. The 2x digital zoom served up shots with minimal noise in daylight and in general the primary camera is capable of getting you images with good detail and sharpness under most lighting conditions though it is stymied by indoors and night conditions. 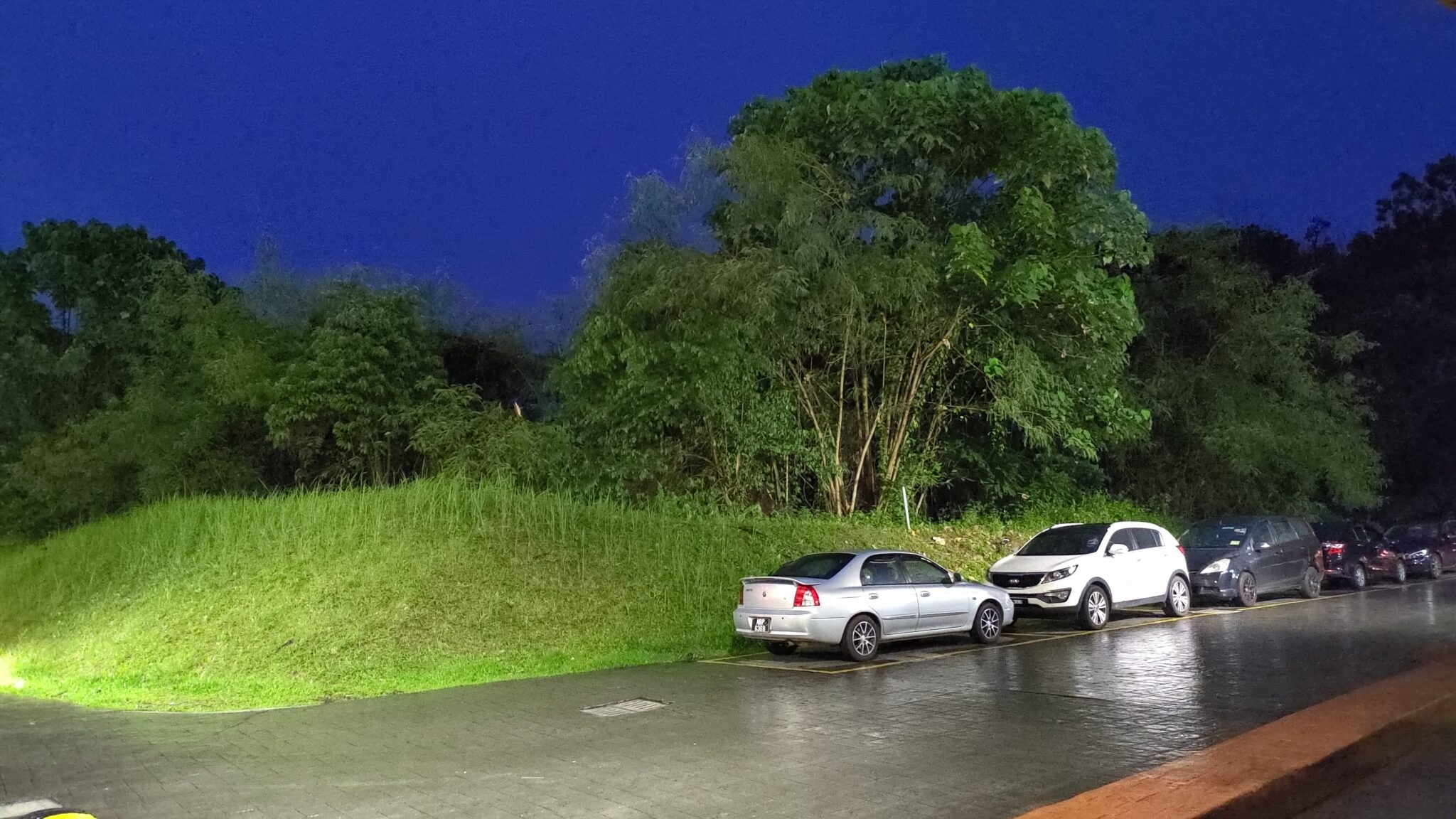 Primary rear camera on the ROG Phone 2 taken at dusk on auto mode with Night mode on. The sky and the grass have somewhat unnatural contrast. 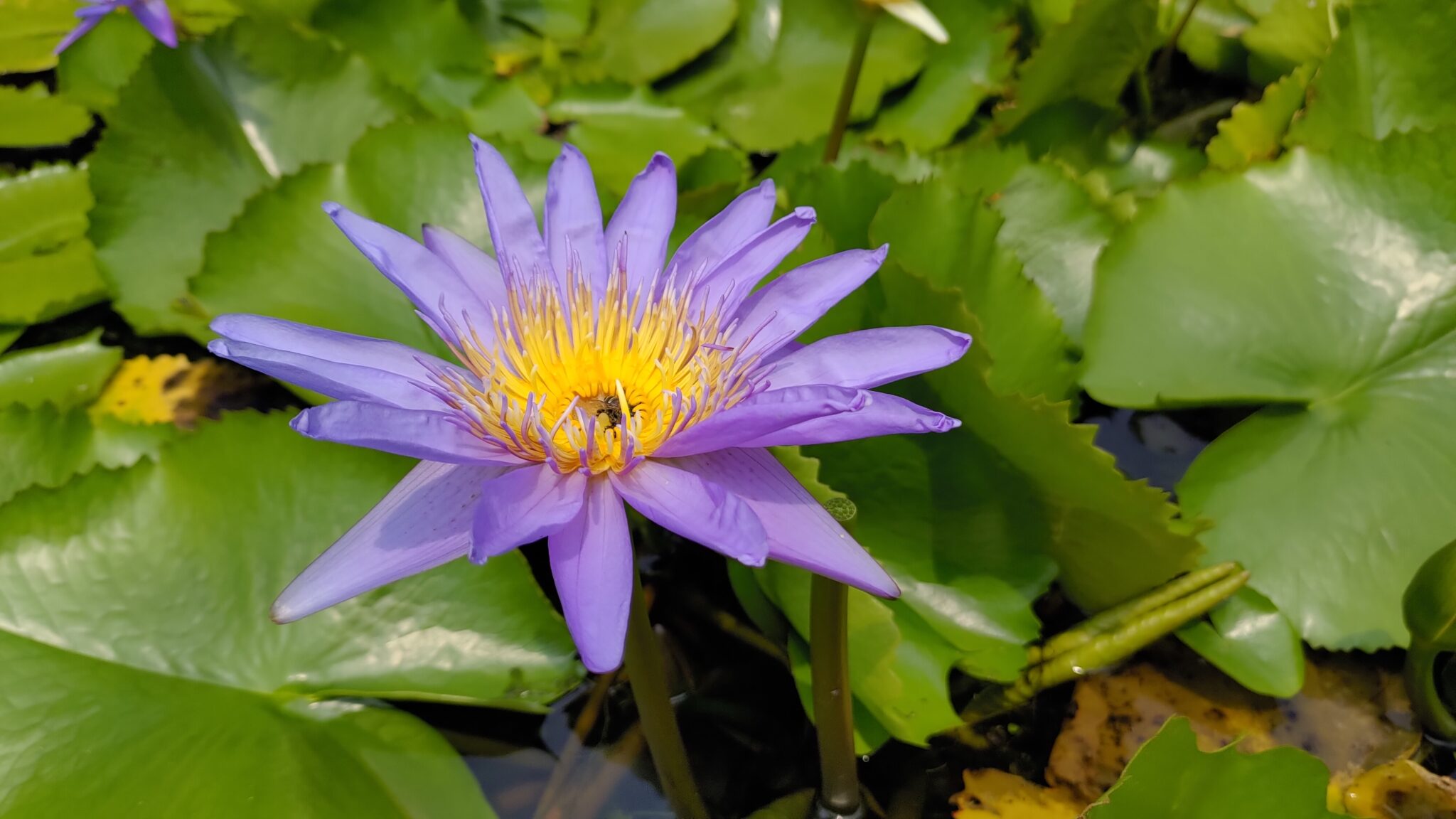 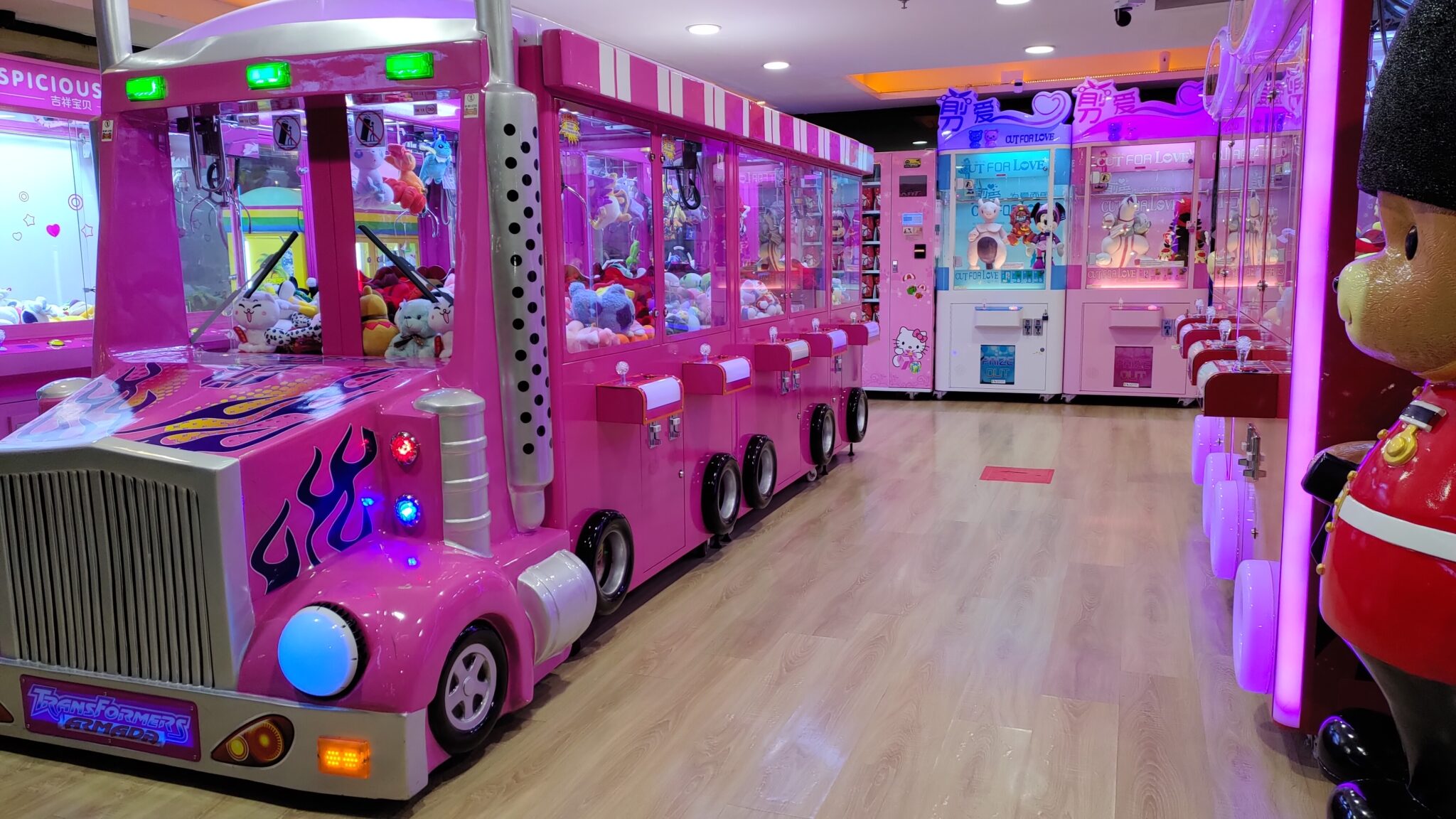 Indoors shot with the ROG Phone 2 primary camera on auto

The wide angle camera fortunately has minimal distortion around the edges; a hazard commonly encountered in cheaper lenses or poorly correction algorithms though colours, especially bright pinks seem somewhat washed out and it doesn’t fare too well either under dim light. The front camera takes serviceable selfies but it isn’t much to write home about. As you’d surmise, this isn’t the main calling card of the ROG Phone 2.

Asus has kitted out their ROG Phone 2 with an absolutely massive 6,000mAh battery that packs 30W Quick Charge 4.0 support along with the requisite charger in the box. Even with the screen cranked up to a 120Hz refresh rate and on auto brightness settings, the ROG Phone 2 with a normal use case as a phone with minimal gaming was easily able to last north of two days. 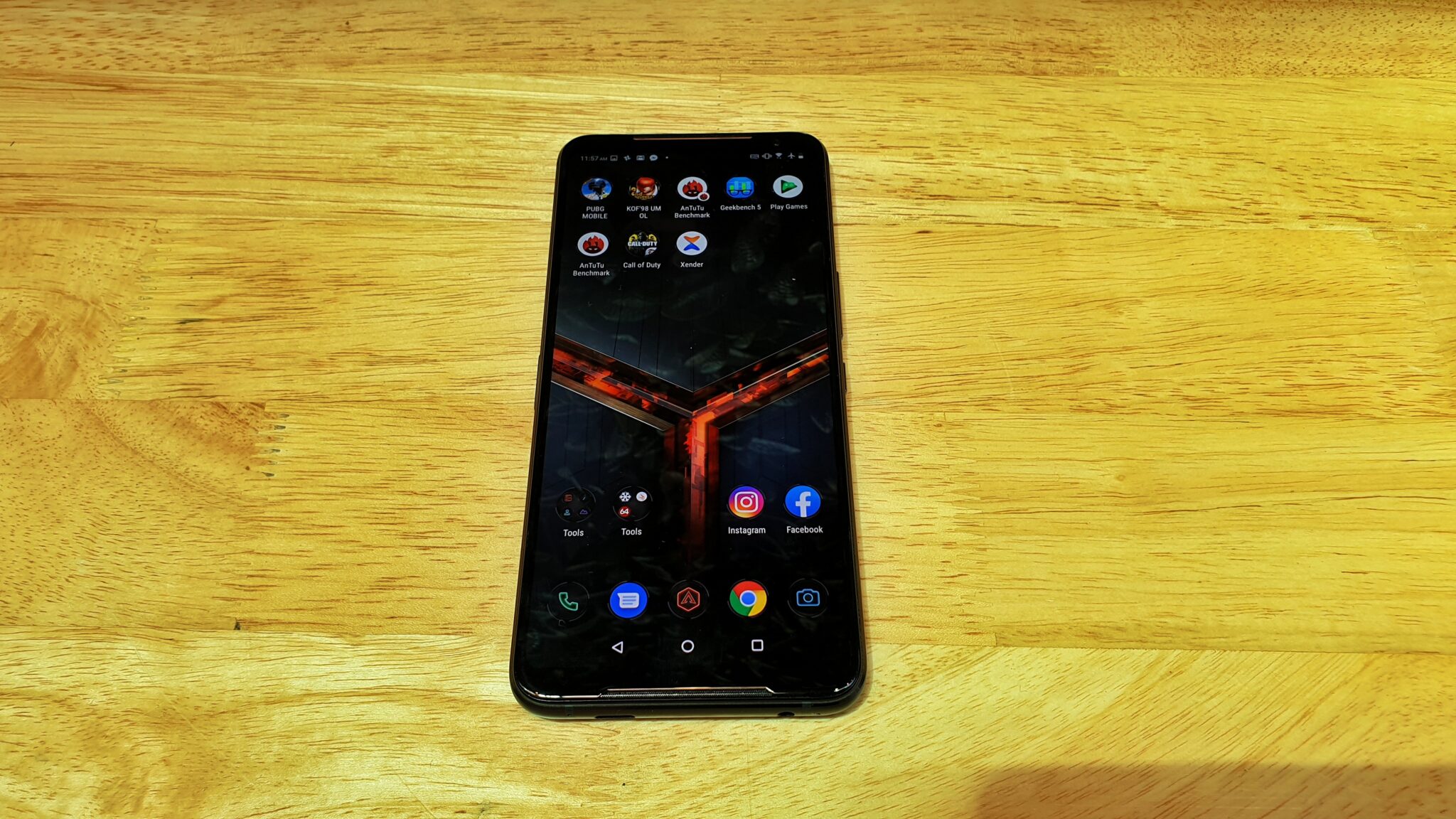 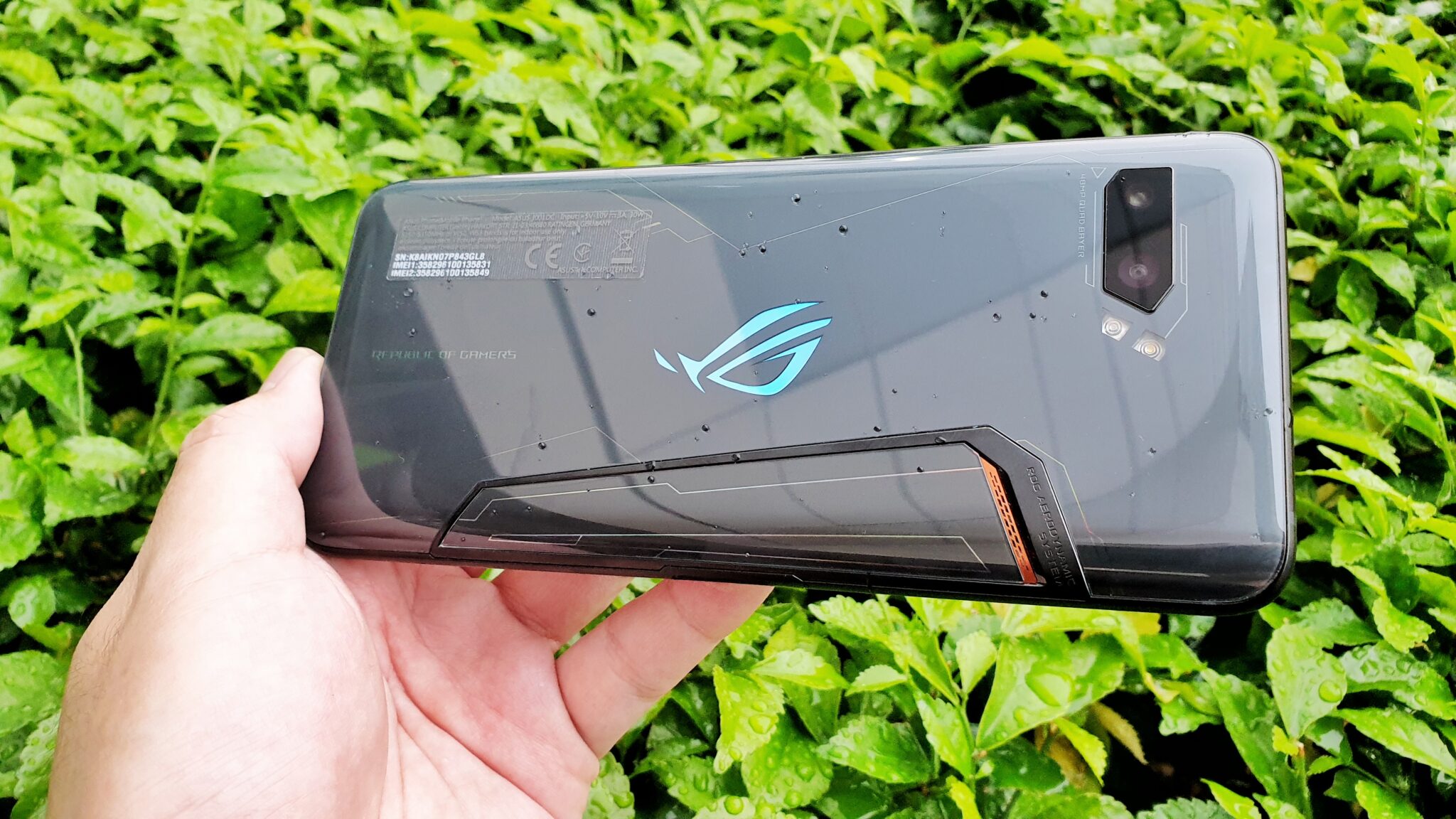 In the unlikely event you need to eke out additional juice from the already large battery, the ROG Phone 2 has a host of additional battery modes as well as a rather novel Battery Care mode that slows down the charging time to preserve the lifetime of the battery.

As it stands, the ROG Phone 2 is the equivalent of a Formula 1 race car. For gaming, it’s a veritable speed demon with scads of pixel crunching power  as well as the cooling capabilities to keep it ticking at top speed paired with a 120Hz display, a rocking pair of stereo speakers and massive battery life to make any game an experience to remember.

Unfortunately, there aren’t that many games that would be able to take full advantage of the ROG Phone 2’s massive power save for a select few competitive games like PUBG, Call of Duty Mobile, Mobile Legends and a few other competitive games on Android. If you’re sufficiently creative, it’s an excellent platform for emulators too.

As an otherwise general workhorse phone, it’s on the heavy side and has a middling set of cameras. Working in its favour though are some of its capabilities that make it such an impressive gaming phone – the excellent display and speakers, the high-powered processor offers blazing fast performance as well as the immense battery life lend it excellent endurance.

At RM3,499, the Elite variant of the ROG Phone 2 is priced at the lower end for most flagships while the Ultimate edition with its humongous 1TB storage is approaching the top end of the flagship category which puts it squarely in premium territory.

If you’re planning to take full advantage of its capabilities as a gaming phone, you’ll inevitably need to chunk out for its array of optional controllers and other add-ons though casual gamers will find its capabilities out of the box are more than sufficient to tackle the odd LAN match or two. If you’re looking for the best gaming phone that money can buy  the ROG Phone 2 won’t disappoint you.

What we liked Gaming optimised design, air trigger shoulder buttons, side mounted Type C port, beefy specifications
What we didn’t Underwhelming cameras, accessories not cheap, no IP68 water resistance, no wireless charging
We say The Asus ROG Phone 2 is a thoroughbred of a phone with its form and function optimised to prioritise gaming over other concerns. It also has an array of useful optional accessories but fully kitting it out will cost you a pretty penny indeed though it’s stock configuration is more than sufficient for most gamers. If you’re looking for the most powerful and best designed gaming phone that money can currently buy, this is it.