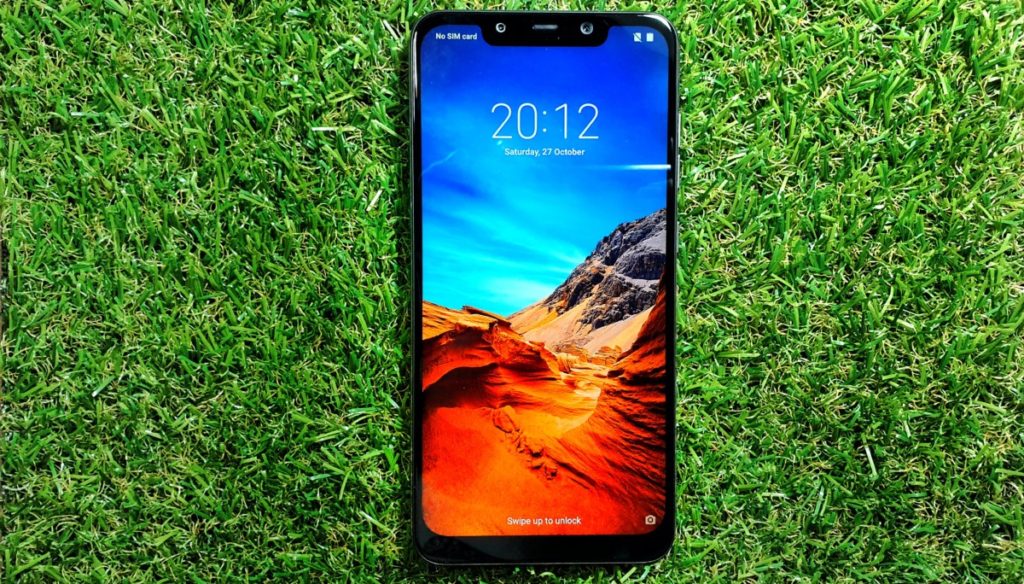 Xiaomi’s Pocophone F1 sets a new bar for midrange phones as it offers a flagship-class Snapdragon 845 processor along with decent overall performance at a very affordable price. If you’re looking for a high-powered performer on a budget, this is it.

Xiaomi’s Pocophone F1 has completely upended the status quo of what exactly a midrange phone ought to be as it comes with one of the most powerful bits of processors possible that you can cram into a smartphone – a high-end Snapdragon 845 octacore, the very same one powering many flagship phones at an absurdly low price that’s almost a third of what a phone from a competing brand would cost at retail.

In terms of packaging, the Pocophone F1 strikes a rather modest package with a black cardboard box complemented with yellow font and trim all around. Pop the box open and Xiaomi has bundled a fair selection of accessories to go with the phone. You get a soft TPU casing, a quick start manual, a SIM card pin, a three-pin UK-style 5V/2A fast charger and a USB Type C cable. Alas, it lacks a bundled pair of earbuds but seeing the selection that Xiaomi has available for purchase separately, it’s a minor drawback at best. Where the phone truly impresses though is what it has under the hood. 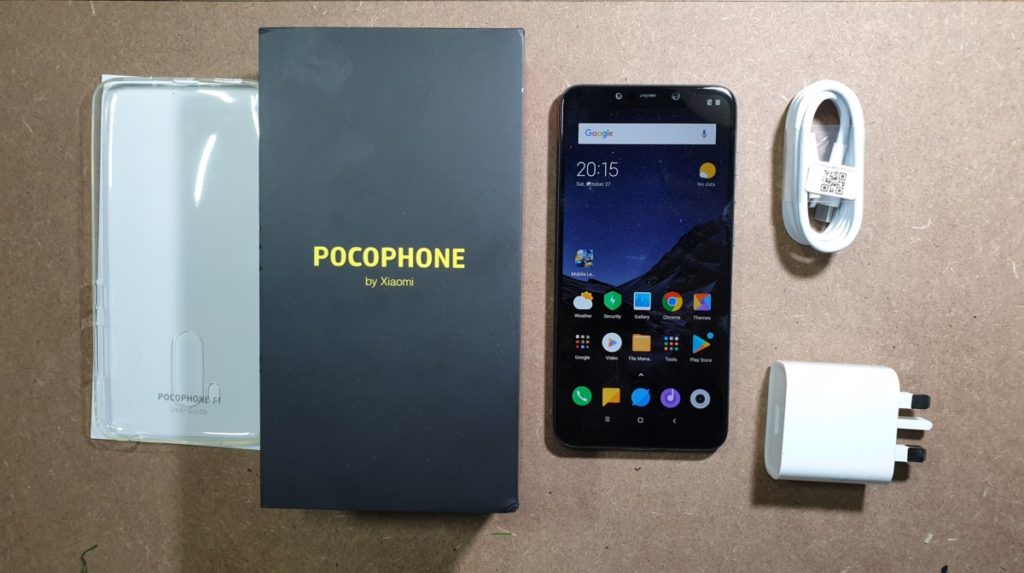 Externally, the Pocophone F1 strikes a rather conservative look about it, ticking off all the checkboxes for contemporary design though it refreshingly ditches the faddish mirrored backplate so beloved of midrange phones attempting to look more premium and instead goes for a more practical if somewhat utilitarian polycarbonate backplate done up in an ashen shade of gray.

The backplate is pleasantly fingerprint resistant though it is also slippery to wield unless you plonk on the bundled TPU casing. Emplaced in a vertical alignment on the backplate is the phone’s dual camera along with a rounded fingerprint reader and an LED flash riding shotgun next to the camera array. 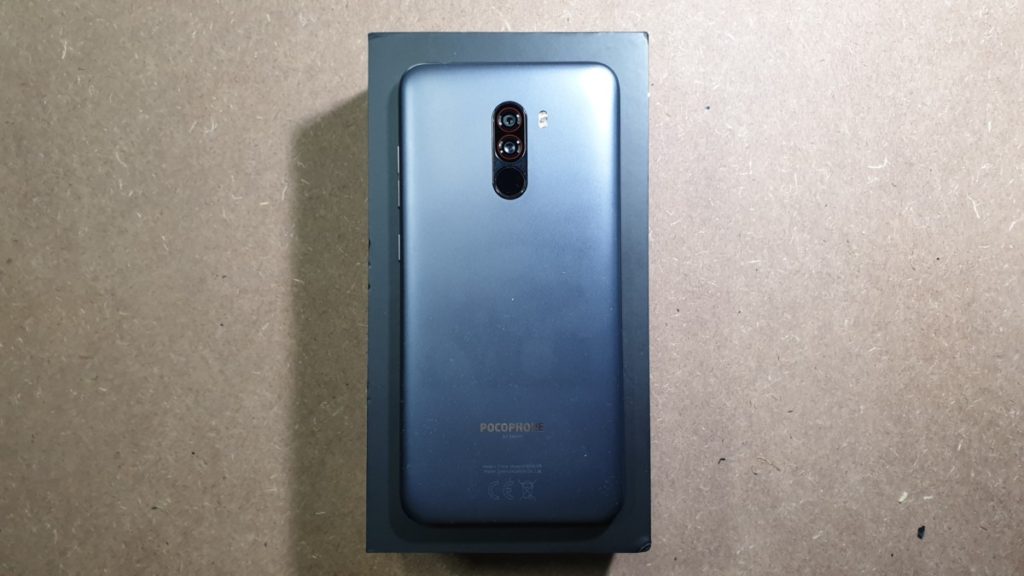 The left side of the phone is bare save for a hybrid SIM card slot while the right hosts a power button and a volume rocker which feel rather plasticky to the touch. The top of the phone hosts a 3.5mm audio jack while the base hosts a centre-mounted USB Type C port flanked by a pair of speaker grilles though the phone only has a single mono speaker at the base.

Up front, the Pocophone F1 mounts a notched 6.18-inch IPS LCD touchscreen with a sharp 2,245 x 1080 pixel resolution and a large 18.7:9 aspect ratio on account of its amazingly slim side bezels; it still has fairly large chin at the base of the display though it remains one of the larger displays in its price category. The display notch is fairly deep and hides a front-facing 20-MP f/2.0 selfie camera along with an IR camera and illuminator for its face unlock mode. 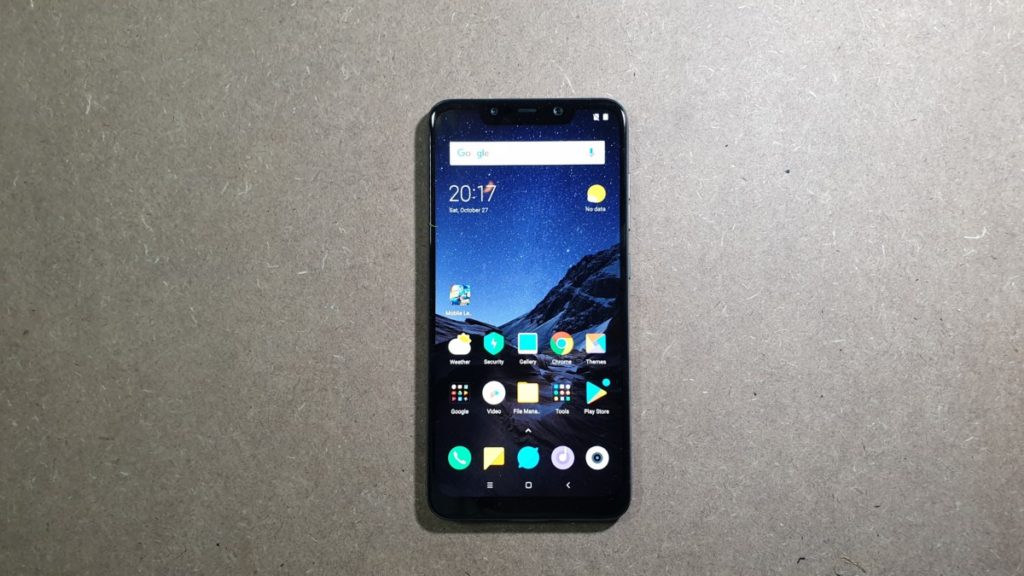 As far as build quality is concerned, the Pocophone F1 does not disappoint. While aesthetes will quibble over its lack of mirrored glass backplates and whatnot along with its somewhat plasticky buttons, more practical users will appreciate its sturdiness and resistance to fingerprints.

The Xiaomi Pocophone F1 is, to date, the only phone in its price range to mount a flagship-class Snapdragon 845 2.8GHz processor. Whereas many other competitors use midrange SoCs or last year’s processors, the Snapdragon 845 is unabashedly one of the most powerful processors that you can cram into a smartphone for 2018.

To ensure consistent performance under heavy workloads, Xiaomi has ensured that the processor quite literally remains cool as it has a copper heat pipe and a vapour chamber to vent heat out and away from it and other critical hardware. A feature like this is usually reserved for much pricier phones which makes it quite an accomplishment for a phone that costs circa RM1.3K.

This setup is complemented with an Adreno GPU, 6GB RAM and 64GB of expandable storage via the hybrid SIM card slot. A higher end variant with 6GB RAM and 128GB of storage also exists for slightly more dosh.

Running under the hood is Android 8.1 Oreo overlaid with Xiaomi’s tweaked MIUI user interface which is now in version 9.6 though it has been given a few tweaks over the stock MIUI seen in other Xiaomi phones. Of note is that the phone now supports a handy Split Screen feature that lets you simultaneously launch two apps with resizable windows onscreen which comes in handy if you’re wont to multitask. All native apps that came bundled with the phone work flawlessly with it including YouTube and Chrome and a decent selection of third party apps too.

As par for the course, you’re given the option to alter themes at will and the phone comes with a modest selection of bloatware though they’ve pared it to a minimum with Xiaomi’s own browser app, a shortcut to Booking.com and Lazada as well as a direct link to the MIUI forum. Of note with the revamped MIUI on the Pocophone F1 is a series of tabs at the top that allow you to search for apps installed on the phone based on broad categories like Entertainment, Tools, Shopping and the like.

When subjected to benchmarks, the Pocophone F1 did not disappoint and displayed similarly high performance akin to other phones mounting a Snapdragon 845 processor. In PCMark’s Work 2.0 test, it got a score of 7,795. In Antutu 3D, it got a very respectable score of 263,091 points. In Geekbench 4.0, it netted a single core score of 2,431 and a multi-core score of 9023 points. In 3DMark, it got a score of 3,765 in Sling Shot Extreme OpenGL ES 3.1 and 2,740 points in Sling Shot Extreme – Vulkan.

Under practical field tests, the phone did not disappoint and handled everything asked of it from web browsing to heavy gaming with the likes of PUBG, League of Legends and Freefire without faltering or slowing down.

The IPS LCD display on the Pocophone F1 was fortunately up to the task for gaming, movings and web browsing duties with great colour rendition, nicely deep blacks, near pristine whites and good legibility under sunlight though audio quality is fair to middling on account of the mono speaker. It’s more than enough for casual gaming and catching up on the odd episode or two on Netflix but cramming in a stereo setup would have secured cemented its position as king of the midrange smartphone throne.

As par for the course, the Pocophone integrates a dual camera setup that combines a 12-MP camera with a bright F/1.9 aperture and that uses Sony’s vaunted IMX363 sensor which has dual pixel phase detection autofocus. The secondary 5-MP camera is primarily there for depth data when taking shots. Unfortunately, the phone lacks optical image stabilisation. This setup also allows the Pocophone F1 to capture 4K video in H.264 codec which is a pleasant bonus.

The front hosts a large 20-MP camera with an F/2.0 aperture for selfies and 1080P video. In lieu of a flash, the screen flashes white to illuminate a subject. 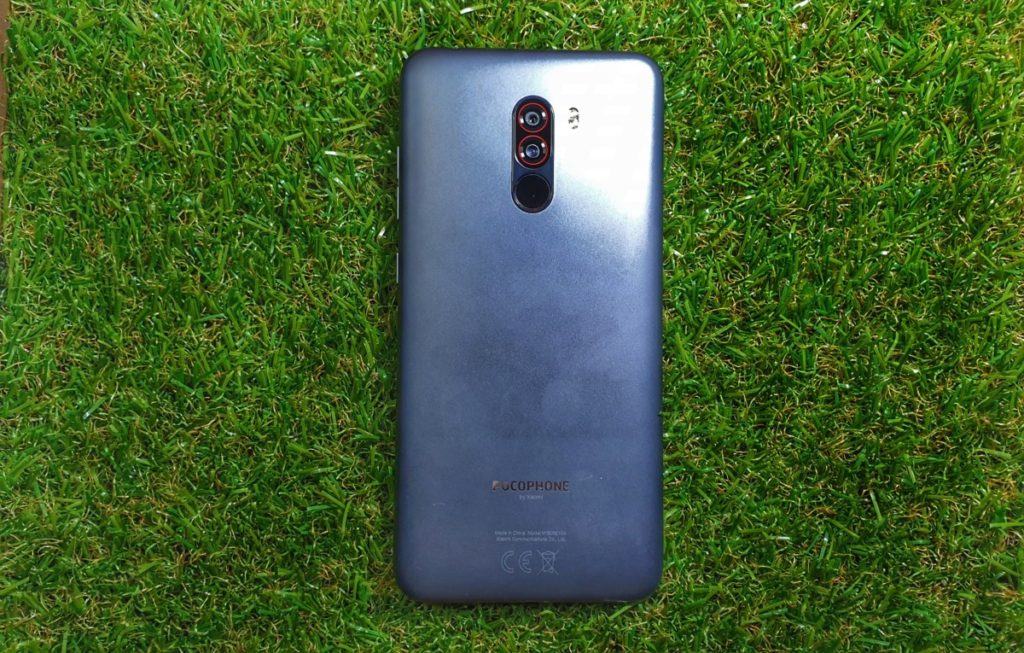 The camera UI offers the usual gamut of filters and a manual mode for more hands-on snappers with a HDR mode and an AI mode, both of which you can activate or deactivate at will or in tandem. In general, we tested it primarily with HDR mode on auto and with AI mode both on and off. Seeing as this is a Xiaomi offering, it also has a beautification mode that lets you dial in just how white your skin, how big your eyes and how smooth your features can be though it seems to work best for female subjects.

In general, the Pocophone F1’s rear camera setup is capable indeed, more so for what you pay for. Daylight shots are excellent with scads of detail and pretty good colour reproduction though we weren’t able to detect discernible differences with AI mode on or off. Low light shots proved to be surprisingly good though there’s some pretty aggressive noise reduction so details are somewhat soft in general. 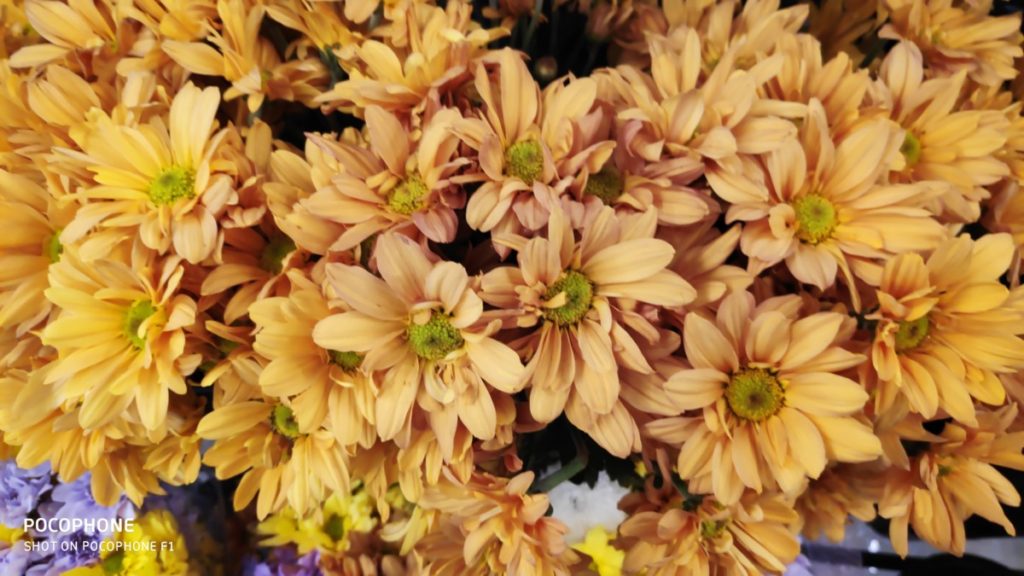 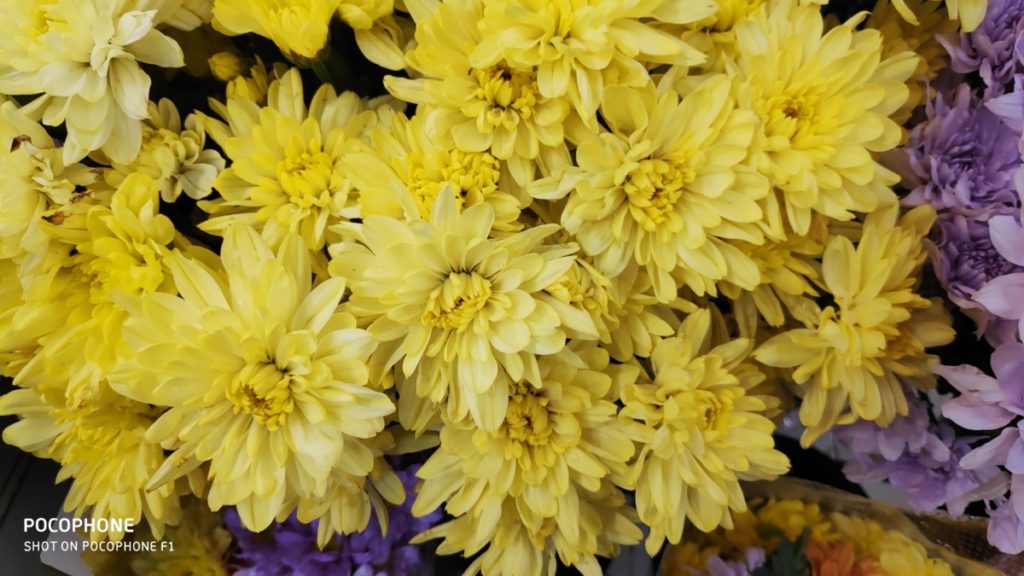 Front selfies under daylight conditions are pretty decent with fairly accurate bokeh though the camera tends to flub it with very fine details like hair ending up defocused along with the background.

Videos captured on the rear cameras are smooth, fairly detailed and judder free though the electronic image stabilisation seems to cap out at 1080P even though the menu ostensibly allows it to run at 4K resolution, resulting in juddery 4K video if you’re using it handheld; a tripod would be prudent in this case. 1080P videos with EIS on are pleasantly smooth even when captured at a steady walk. 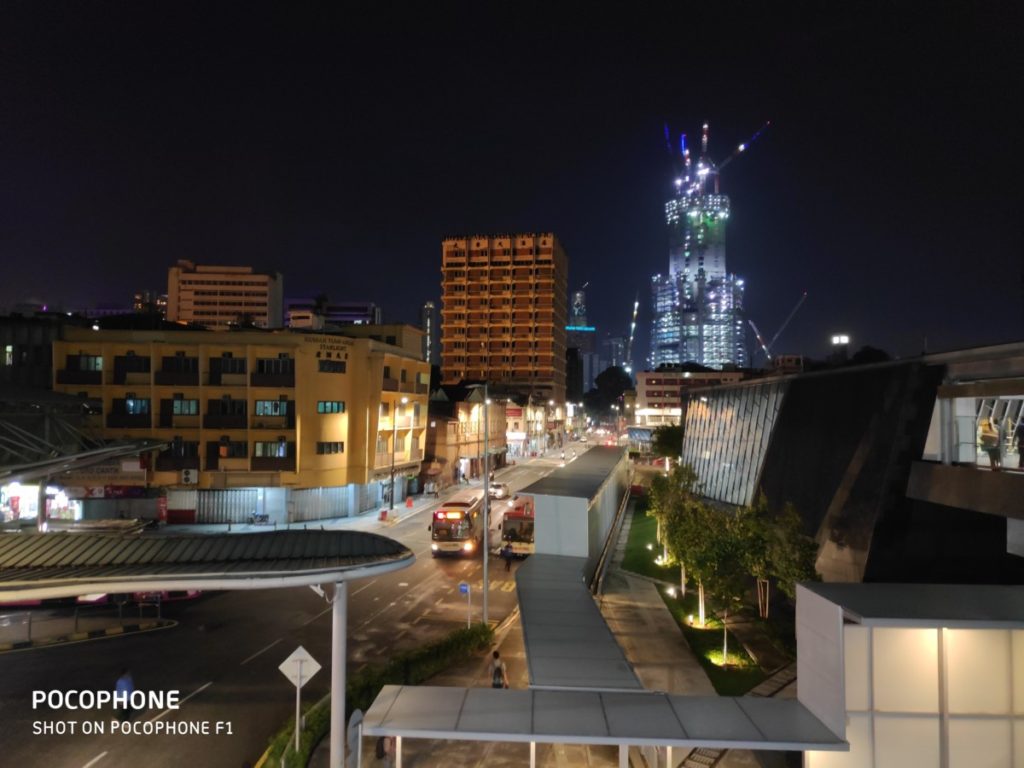 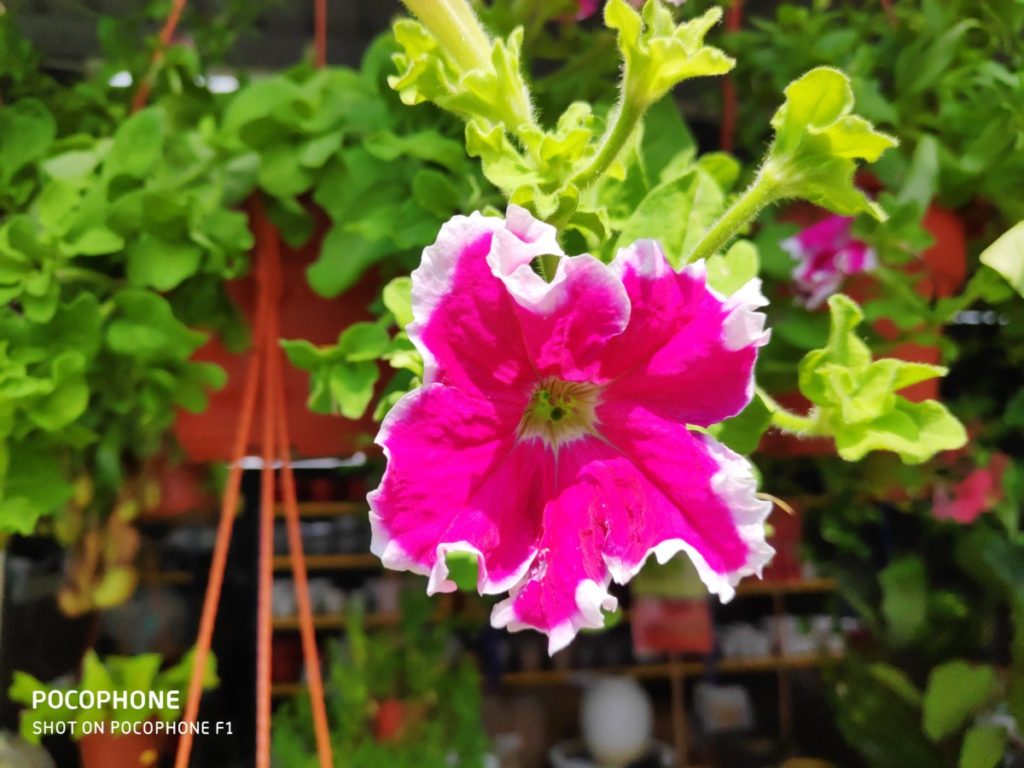 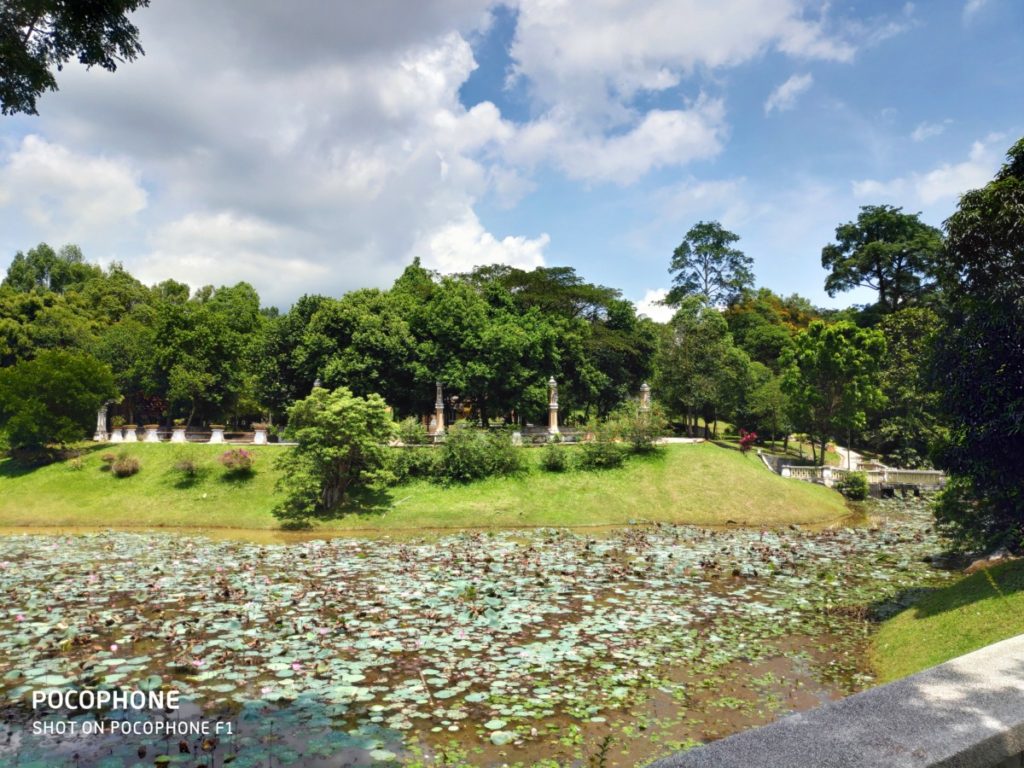 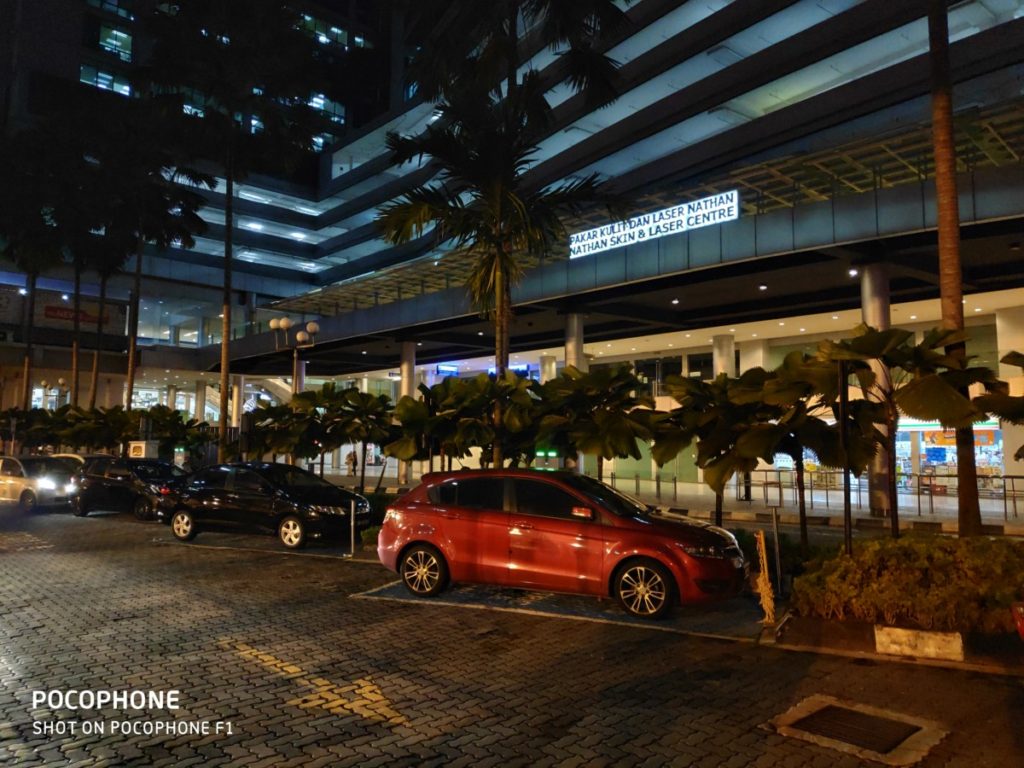 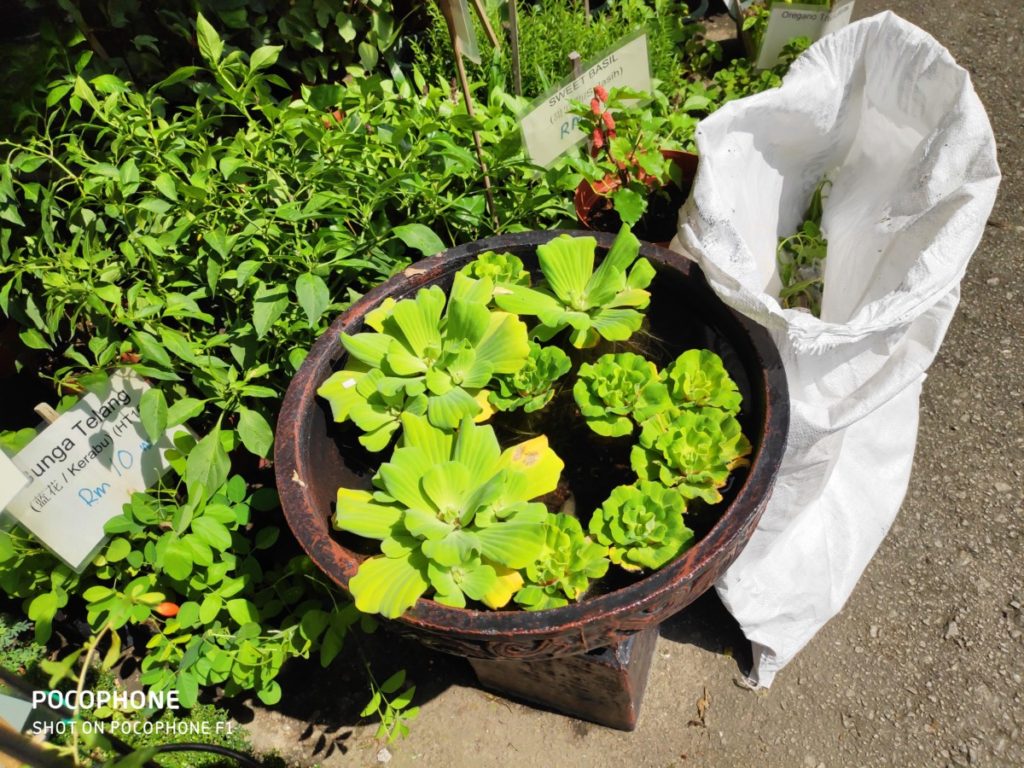 Powering the Pocophone F1 is a 4,000mAh battery with QuickCharge 3.0 support. Under standard field conditions with auto brightness on, data on for most of the day and about an hour’s worth of gaming, video along with constant use of social media, the phone was easily able to last through an entire day with more than enough to spare for the trip home though your mileage will vary if you’re a heavy gamer. Charging it takes a couple of hours if you’ve completely drained the battery which is above average for phones with QuickCharge 3.0 support and a battery this large.

For your money, the Pocophone F1 redefines just what a midrange phone has to offer as it throws in a large and luscious display, a powerful Snapdragon 845 processor, expandable storage and a pretty decent rear camera along with a huge battery at a very modest price tag. Granted, there are some quibbles like the plasticky build, the lack of OIS and the omission of stereo speakers but they’re all minor niggles at best seeing what it has to offer. If you’re looking for a high-performing, powerful phone that’s worth every dollar, the Pocophone F1 is it.

What we liked Immensely good power to price ratio, sturdy build quality, pretty decent camera
What we didn’t Still has quite a bit of bloatware, plain aesthetics, lacks water resistance
We say Xiaomi’s Pocophone F1 sets a new bar for midrange phones as it offers a flagship-class Snapdragon 845 processor along with decent overall performance at a very affordable price. If you’re looking for a high-powered performer on a budget, this is it.