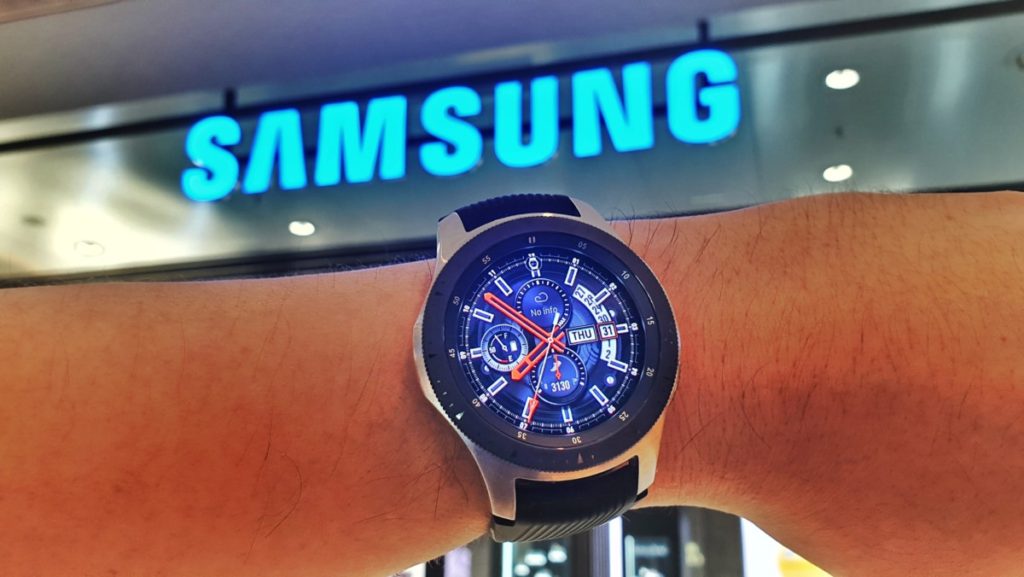 The Samsung Galaxy Watch is one of the best designed smartwatches to date with exceptional fitness tracking capabilities, superb build quality and great battery life.

Released near the tail-end of last year, the Samsung Galaxy Watch is the successor to the earlier Gear Sport and its earlier generational predecessor the Galaxy S3 smartwatch which also came in two different flavours – the chunkier Gear S3 Frontier and the slimmer Gear S3 Classic.

This time around, the Galaxy Watch ditches the erstwhile Gear branding to be more in line with their Galaxy family of phones. It comes in two slightly different variants though this time differentiated by size as opposed to aesthetic design with a 46mm and 42mm sized version depending on how large your wrists are.

The 46mm sized variant, which we tested, has a slightly larger display and battery but is otherwise similar to the 42mm sized Galaxy Watch variant.

Out of the box, the Galaxy Watch comes with a basic array of kit including the charging dock, the Galaxy Watch proper, a secondary smaller sized strap and a charging cable for the aforementioned dock, all of which are neatly sectioned into compartments in the packaging. If you invested in the preorder, you can get an additional strap thrown in on the house.

Like the Gear Sport and Gear S3, the charging dock for the watch is a stylised pedestal that lets you magnetically dock the Galaxy Watch onto the raised section for charging while the base of the pedestal has a micro USB port for the charging cable.

Unfortunately, you’ll need to bring this dock with you if you need to charge the watch on extended trips but it’s otherwise small enough to cram into the corner of your backpack without undue trouble.

Befitting its name, our test unit of the 46mm Galaxy Watch has a shiny silver bezel and lugs. The underside consists of a matte black plastic with sensors for the heart rate reader while the right side comes with a pair of knurled buttons to navigate parts of the user interface. 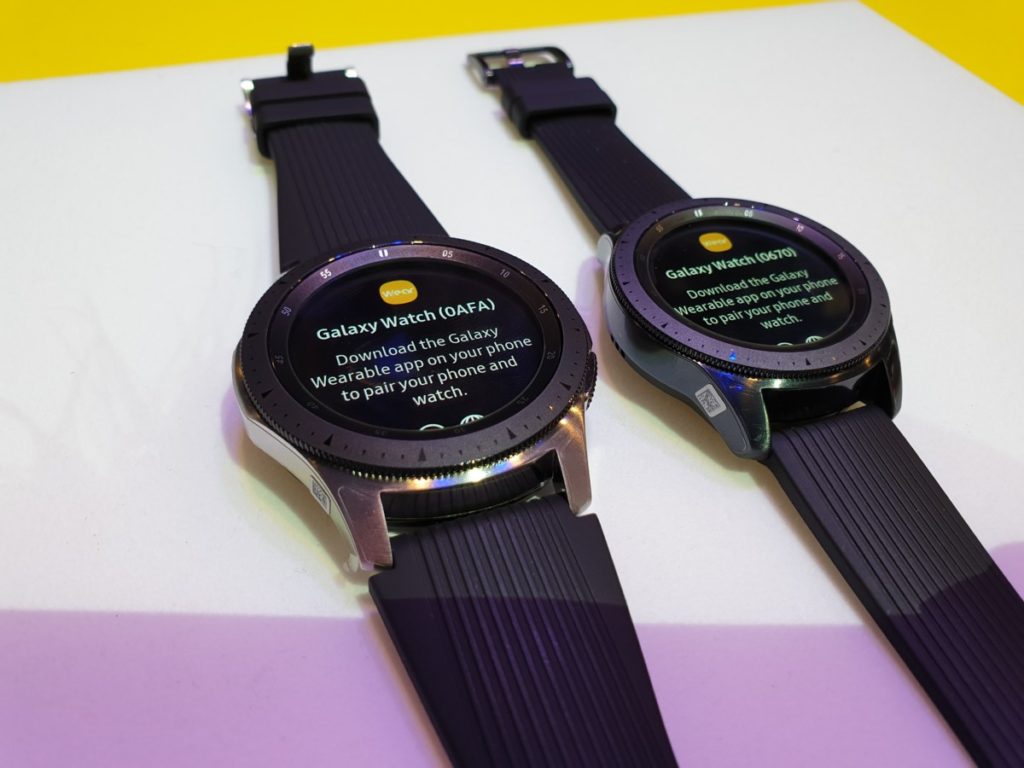 Up top, the watch has a 1.3-inch rounded Super AMOLED touchscreen surrounded by a matte black rotatable dial that, much like the Gear Sport and Gear S3 before it, acts as a means of going backwards and forwards in the menus.

The straps that come stock with the watch are made of rubber done up in a matte black and feature a design that’s easy to remove by hand. Much like its predecessors, the Galaxy Watch allows you to swap the straps for third party 22mm width straps.

Overall build quality is top shelf, befitting Samsung issued hardware with a solid heft and feel along with an appearance befitting a real watch. Every component and aspect from its buttons to the rotating bezel is precision fitted and feels suitably premium indeed.

Better yet, the watch itself is rated IP68 for water resistance, which allows you to wear it for a quick dip in the pool or in the shower. The watch is also rated to MIL-STD-810G standards for durability, which allows it to survive modest drops to the deck, making it one of the most durable smartwatches made by Samsung to date.

As smartwatches go, the Galaxy Watch is rather well appointed in terms of the hardware it packs. It comes with a 1.3-inch round Super AMOLED display with 360 x 360 pixel resolution sheathed in Corning Gorilla DX+ glass which lends it some resistance against minor nicks. Under the hood, the watch runs the latest version of their Tizen OS 4.0 on an Exynos 9110 Dual core 1.15GHz processor paired with 768MB RAM and 4GB of built-in storage.

Rather than the usual Android Wear OS seen in many other wearables bar Apple’s own kit, Samsung’s Tizen OS is custom built for the Galaxy Watch and proves to be exceptionally well integrated into its functionality and user interface.

While you can poke about the touchscreen like most smartwatches, you can use the rotating bezel to get about the menus by dialling it back and forth like a safecracker in combination with the two knurled buttons on the side of the casing.

They’ve fine tuned the sensitivity of the dial and touchscreen this time around, allowing for a finer degree of control and responsiveness which makes the whole affair feel extremely well polished.

To date, the rotating dials in Samsung’s smartwatches remains one of the smoothest, most intuitive controls seen in a smartwatch and which take maximum advantage of the physical shortcomings of a smartwatch and and the fact that you need to use it one-handed.

Getting it up and paired with a smartphone is a relatively simple task via the provision of Samsung’s Galaxy Wearable app that is preinstalled on many Samsung phones and which can be downloaded for free on the Apple app store and the Google Play store.

Adding new apps and watch faces to the Galaxy Watch is via the Galaxy Wearable app itself.

On the app front, the watch has a smattering of options across the board. There’s a few simple games on offer, thousands of available watch faces and a smattering of utlity that add additional functionality to the watch. One lets you watch YouTube on it via WiFi while another lets you read ebooks (not that it’s viable on a 1.3-inch display, mind) but not all are free and a good many of them are third party apps that require you to fork out cash to use.

On top of the usual ability to change watchfaces on demand, tell the time and deliver notifications from texts, calls, social media and whatnot, Samsung has improved the fitness tracking functionality of the Galaxy Watch.

This time around, they have added auto-tracking for six unique workouts – rowing, cycling, elliptical training, walking, running and dynamic workouts. It also tracks close to 40 other different workouts but you’ll have to manually activate it on your watch for it to begin tracking them.

Tracking is spot on and it managed to detect when we were running, walking and cycling in a matter of seconds. It also helpfully mentions if you’re sedentary for any length of time and gives you a helpful prompt to move.

Another interesting feature of note is a breathing exercise app that runs you through a short set of inhalation and exhalation exercises to calm you down. The Galaxy Watch is also able to track the quality of your sleep or lack thereof though it lacks any helpful tips to on how to improve it. Still, having this feature is a huge plus.

What really impresses is the vibrant Super AMOLED display which makes it readable even under direct sunlight. While it only turns on when you list it up to tell the time, you can set the watch to Always On mode though you drain battery life a bit faster.

We even managed to get in a spot of gaming too with the watch and used it as an ersatz music player by preloading a fitness-oriented tracklist onto its modest storage enough to last a decent jog or two around the block. 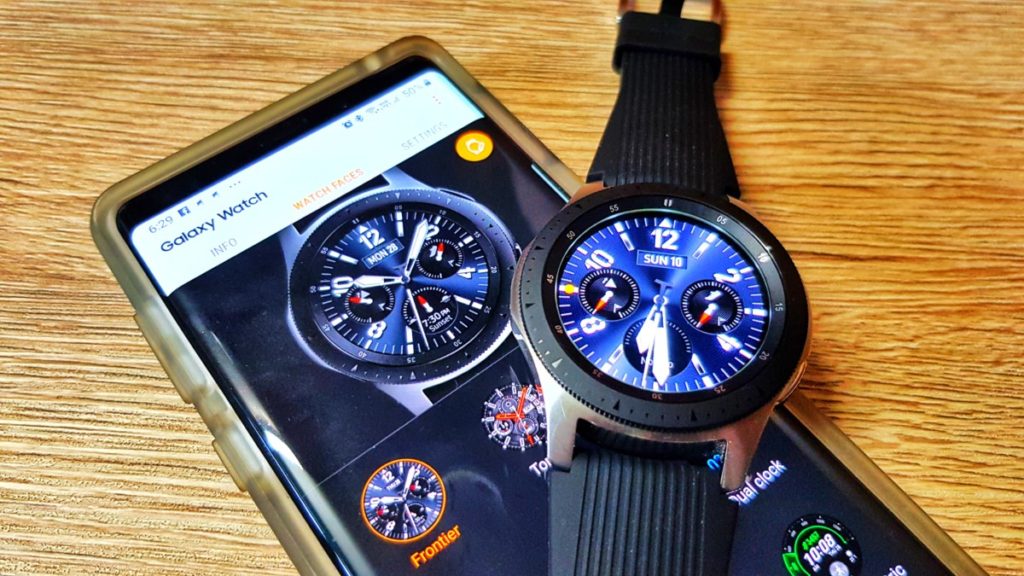 Under normal field conditions, the larger 46mm Galaxy Watch managed to eke out nigh on five days of battery life with everything at full tilt. This is exceptional by any measure though you can attain slightly longer battery life with its low power mode that still lets you get notifications. This kind of endurance combined with its capabilities makes it a very competent package indeed that isn’t exactly cheap by any means but you get what you pay for.

There’s plenty to like with the Galaxy Watch. It is an extremely well polished package that has an intuitive user interface, exceptional battery life, superb activity tracking and outstanding build quality. There’s still a dearth of third party apps but it tackles most of what it needs to get done by a smartwatch in a very competent fashion. As it stands, the Galaxy Watch stands out as one of the best smartwatches that money can buy.