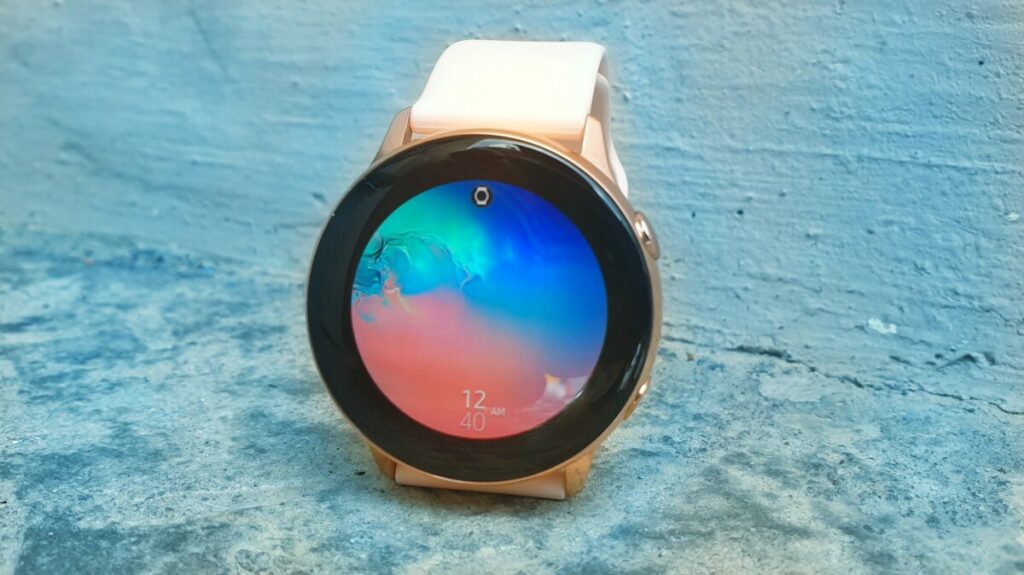 Samsung has a knack for crafting some excellent smartwatches with their Gear S3 Frontier and Gear S3 Classic offering superb build quality, functionality and, of course, prices to match. Last year’s Galaxy Watch proved just as well designed though it also had a similarly lofty price tag. This time around, Samsung is changing tack with their new Galaxy Watch Active that was launched at the same time as the Galaxy S10 series phones as it comes with much more affordable price tag at RM799 albeit with some tradeoffs.

Rather than the large rounded packaging of its predecessors, the Samsung Galaxy Watch Active comes in a compact square box that pops open to reveal a watch in either Rose Gold, Black or Silver along with a matching strap. Our test unit came in a shade of Rose Gold which came with a matching pale pink strap. 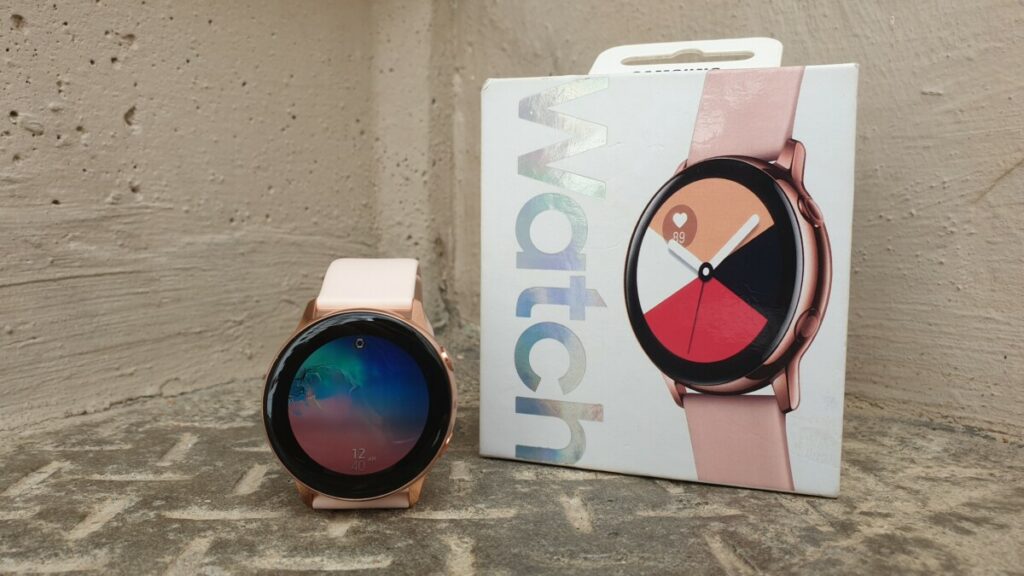 Also bundled with the Galaxy Watch is the associated charging dock, this time consisting of a flat disc tied to a USB cable unlike prior efforts that resembled a pedestal. Like prior offerings, it also comes with another shorter pair of similarly coloured watch straps in case the pre-deployed one proves too large a fit for smaller wrists.

Build quality, as expected, is top notch for the Galaxy Watch Active and proves a match for its predecessors. The silicone watch straps proved to be slightly elastic and were comfortable to wear even over long periods of time. In the case of our test unit, the straps came in a very mild shade of pink that would suit the fairer sex. If the provided watch straps don’t quite appeal, you can swap them out for third party ones as the Galaxy Watch Active uses the standard 20mm watch band size. 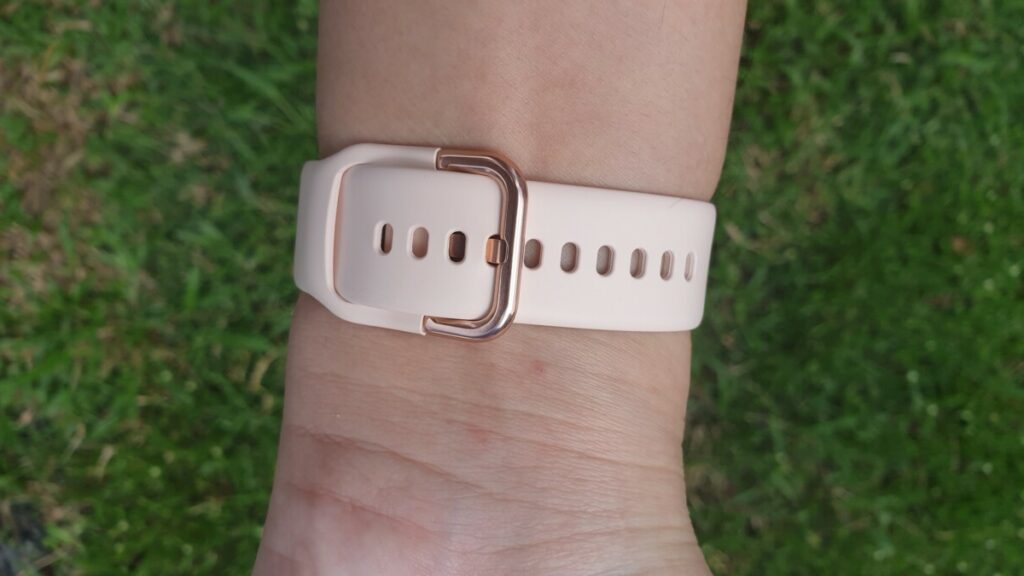 The watch itself has a polished rose gold bezel case and lugs along with a matching watch buckle in the same colour. The sides of the watch case are otherwise bare save for two buttons on the side where crowns would be in a traditional timepiece while the underside hosts a heart rate sensor.

Gone is the familiar rotating bezel seen in the Gear S3 series and the Galaxy Watch from last year to navigate the menus. Instead, navigation is primarily via swiping and tapping the rounded Super AMOLED display and via the two aforementioned buttons which similarly boast a matching polished rose gold finish. The overall control scheme is simpler but the Galaxy Watch Active doesn’t lack for intuitive functionality and newcomers to the Galaxy smart wearable experience likely won’t even miss the rotating bezel at all. 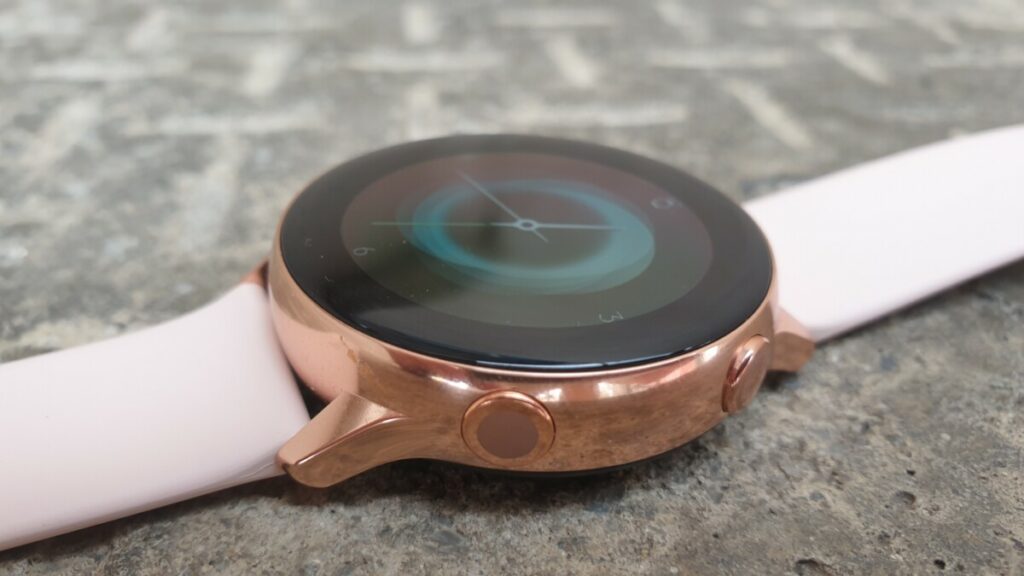 Befitting its name, theSamsung Galaxy Watch Active is designed for more active users and it actually comes with water resistance down to 5ATM which is about 50 metres underwater, which means it’s capable of following you into the pool along with – you guessed it – swim tracking functionality. It’s not designed for diving though so it’s in your best interests to refrain from taking it to the briny depths.

In terms of design and aesthetics, the Galaxy Watch Active does not disappoint with a clean, seamless look with the polished finish and seamless fitting components giving it a premium aesthetic belying its RM799 price tag. 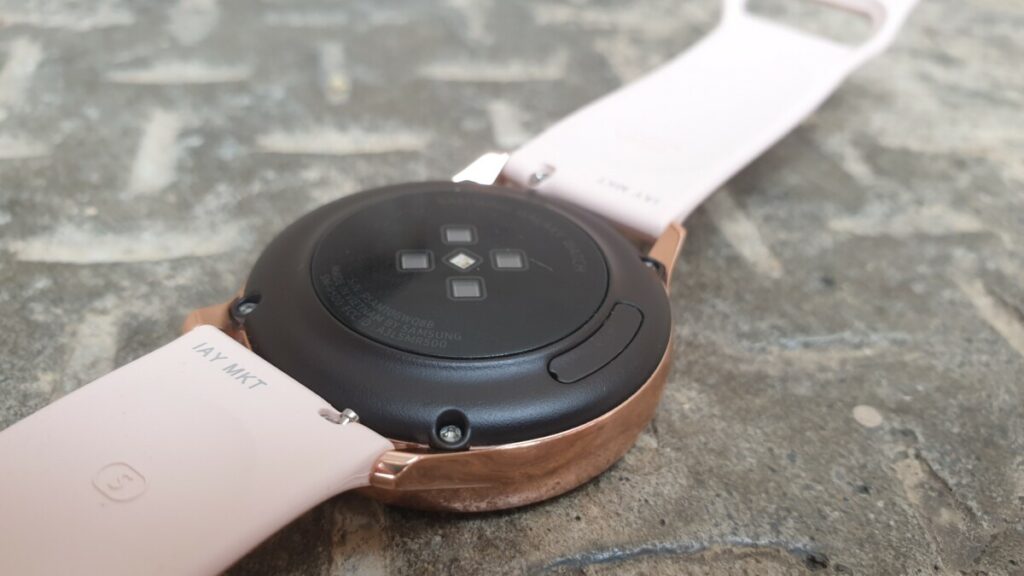 Samsung’s latest digital timepiece has a vibrant 1.1-inch 360 x 360 pixel Super AMOLED touch display up front to tell the time. Running under the hood is their Tizen 4.0 operating system on a dual core Exynos 9110 1.15GHz processor with 750MB RAM and 4GB of non-expandable storage though you only get about 1.5GB of effective usable space once all the firmware updates are dealt with.

Like other prior examples of Samsung’s smart wearable offerings, the Galaxy Watch Active is able to pair up with your smartphone to deliver notifications on top of telling the time. You’re also able to load up a modicum of simple games and other apps on it as well as additional watch faces should the current ones not quite appeal via WiFi. 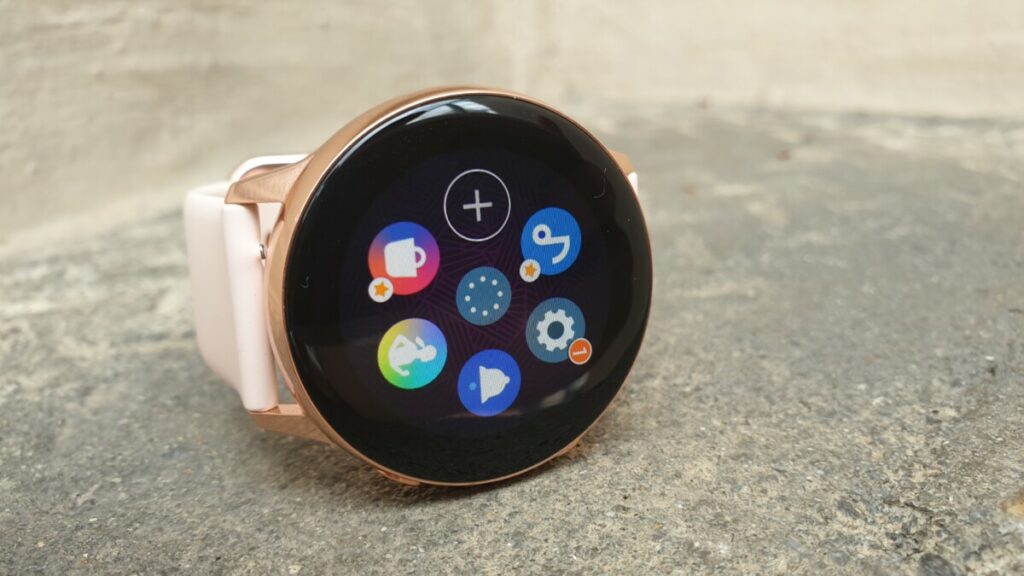 Like prior examples of Tizen, you can rearrange the menus and apps as you see fit. Getting about the menus is quite similar to other Samsung Tizen OS devices albeit without the familiar rotating bezel. You’re able to double tap to wake up the screen as well as tap and swipe to get about the menus. Unfortunately the icons on the watch are rather small so that you occasionally miss the target but the interface is otherwise swift, intuitive and highly customisable.

That’s icing on the cake though as the Galaxy Watch Active’s main raison d’etre is fitness monitoring with the ability to track cycling, running and swimming out of the box and up to 39 other activities, sleep quality or lack thereof, stress levels, calories burnt and how much caffeine and water you’ve taken based on an honour system. You have to manually add how many glasses of water and cups of coffee you taken but the system still isn’t able to accommodate how strong your cup of java is; a double espresso is still counted the same as an Americano. 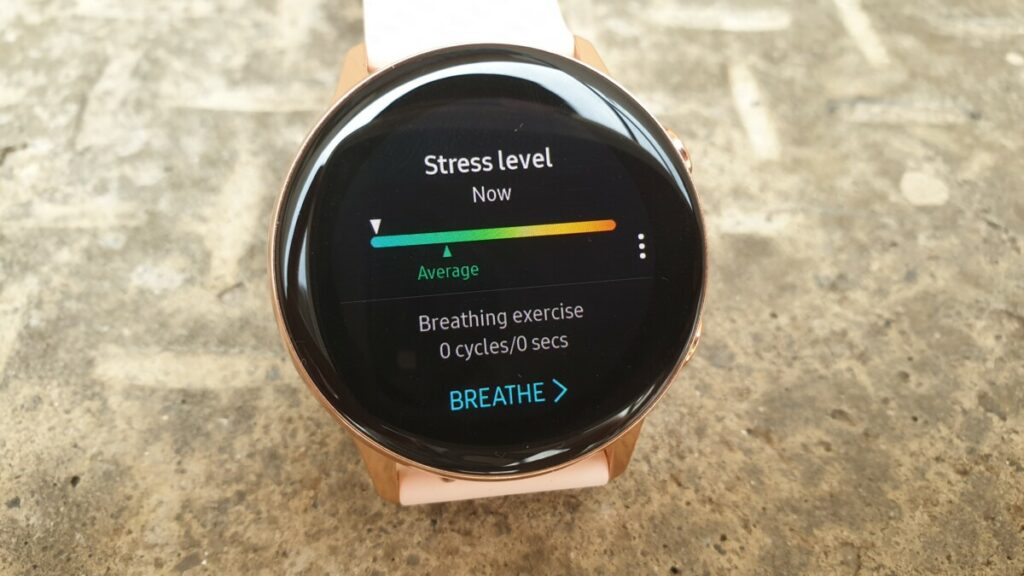 If you’re particularly stressed out, you can fire up a breathing exercise app that prompts you when to inhale and exhale which does come in handy during deadlines. If you need more motivation, the watch also allows you to sideload music on it or stream it off your phone though it lacks built-in speakers so you’ll need to get a separate pair of Bluetooth headphones like the Galaxy Buds to listen to audio. Unfortunately, the lack of storage means you’ll likely be able to cram in a few playlists at most but it’s not a deal breaker as it’s primarily meant to work with a phone.

When worn for several weeks, the Galaxy Watch Active was so light that we almost forgot we were wearing it. It managed to accurately track our heart rate over the duration of the testing period along with our sleep cycles and in several fitness excursions, it managed to effectively track our laps on the track and in the pool. 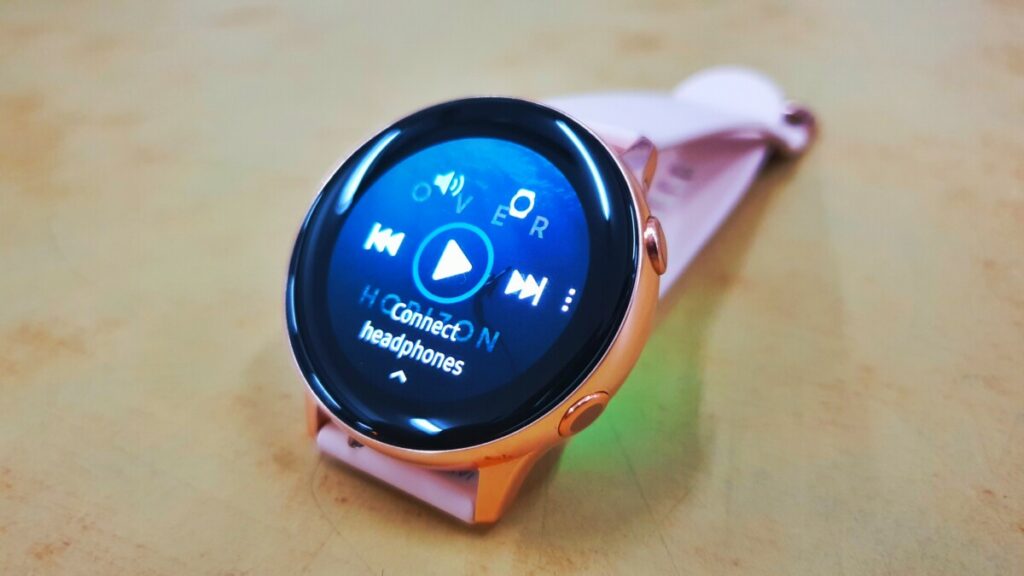 The Galaxy Watch Active crams in a 230mAh battery into its slim case which lasts a good two days or so with normal use. Charging it requires either PowerShare off a Galaxy S10 series phone or via the provided charging cable which magnetically latches on to the back of the watch to dispense life-giving juice. 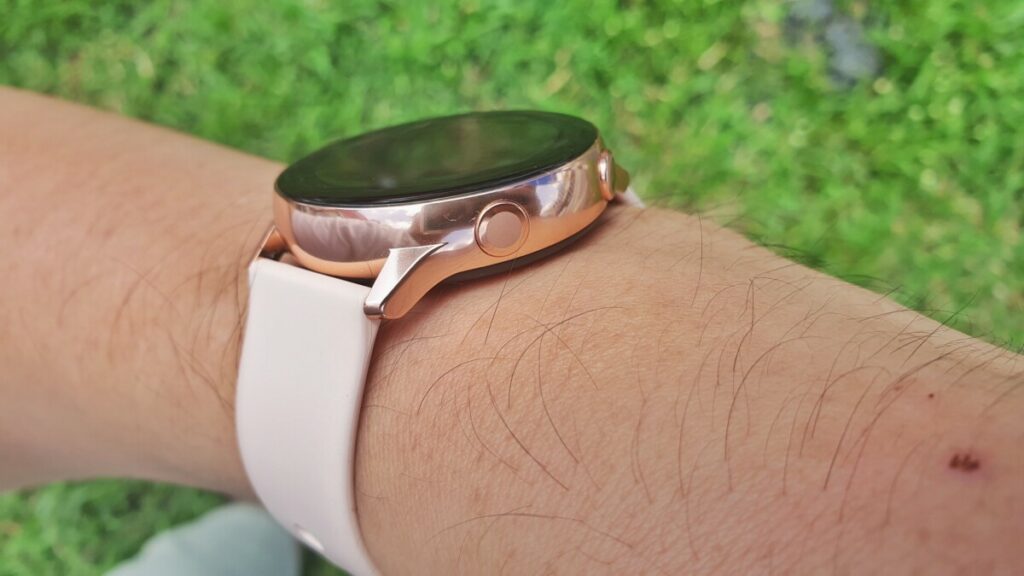 Unlike prior offerings that mandate that you need to carry the charging dock if you’re using it in the field beyond a few days, the provision of Samsung’s PowerShare feature means that you can handily charge it almost anywhere; assuming you have a Galaxy S10 series phone handy that is.

Good build quality and excellent fitness tracking as well as a smooth interface that offers a plethora of changeable watch faces make it well worth a look if you’re seeking a fashionable smartwatch. Throw in competent fitness tracking and a price that won’t burn a huge hole in your pocket and the Galaxy Watch Active looks like a tempting proposition indeed. 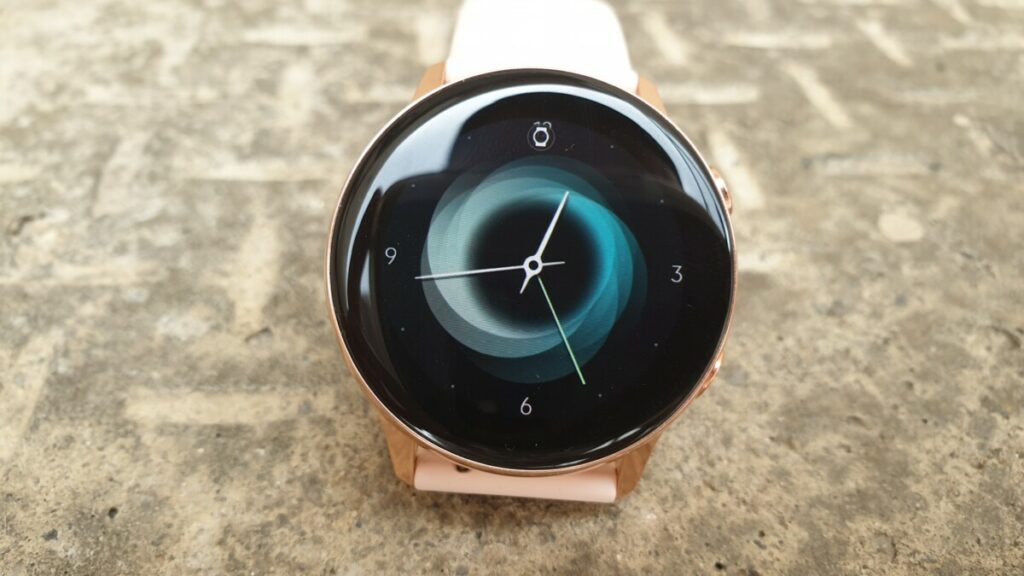 What we liked Beautiful design, 5 ATM water resistance, comfortable to wear
What we didn’t Lacks rotating bezel, tiny icons
We say Affordably priced with a slew of features including some excellent fitness tracking functionality, the Samsung Galaxy Watch Active is a tempting proposition for those looking for a sleek and comfortable fitness wearable that won’t burn a hole in your pocket.