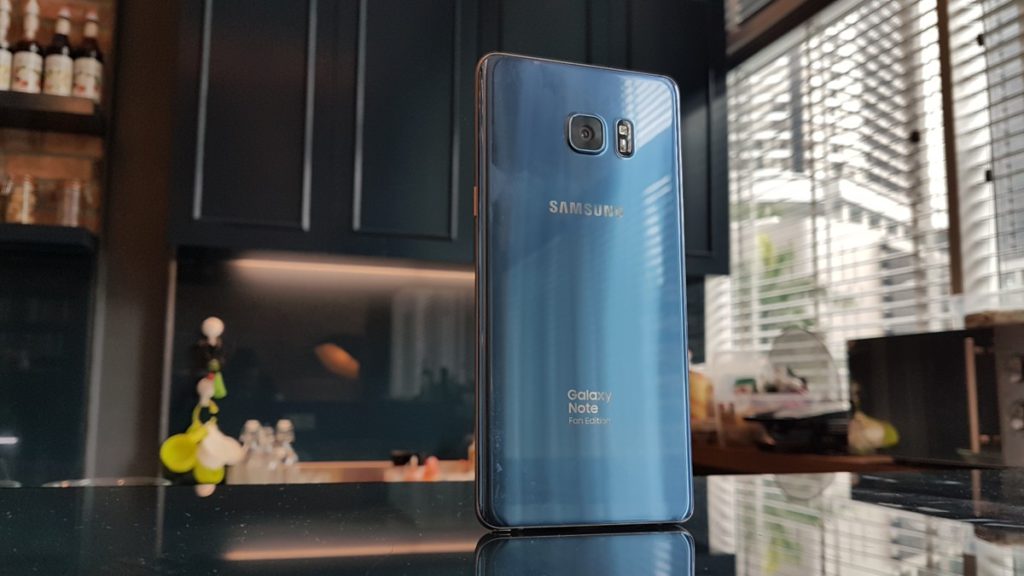 A competently made, superbly specced rework of the erstwhile Galaxy Note7 that acts as a more affordable alternative to the Galaxy Note8. A superb rear camera, a responsive stylus and excellent overall performance make it a highly desirable acquisition for power users on a budget 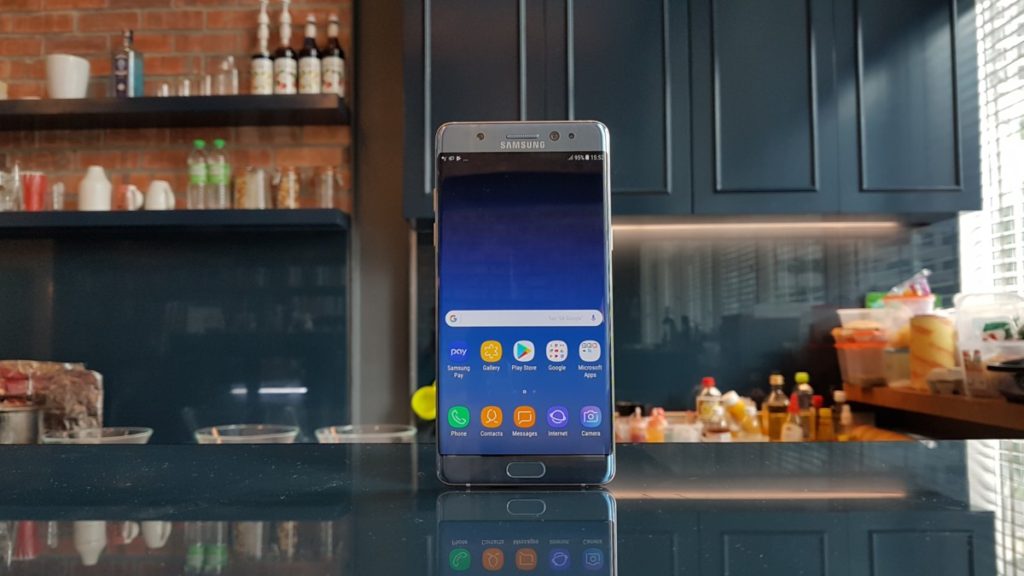 Externally, the Note Fan Edition sports a mirrored metallic blue finish with coppery metal trim on the sides with the rear sporting a 12-MP Dual Pixel camera and optical image stabilisation with an F/1.7 aperture paired with an LED flash which is the same model as seen on the earlier Note7 as well as in the successful Galaxy S7 series phones. 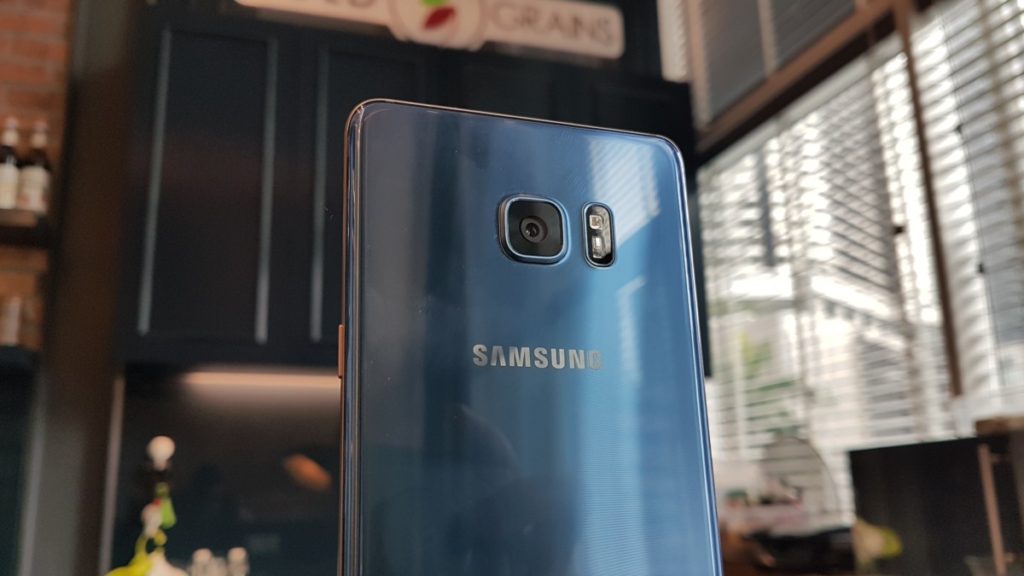 The base comes with a port for the sole mono speaker on the phone, the S Pen stylus well, a USB Type C port and a 3.5mm audio jack. The right side sports a power button  while left has a volume rocker. The top of the phone comes with a hybrid SIM card slot accessible via a pinhole. 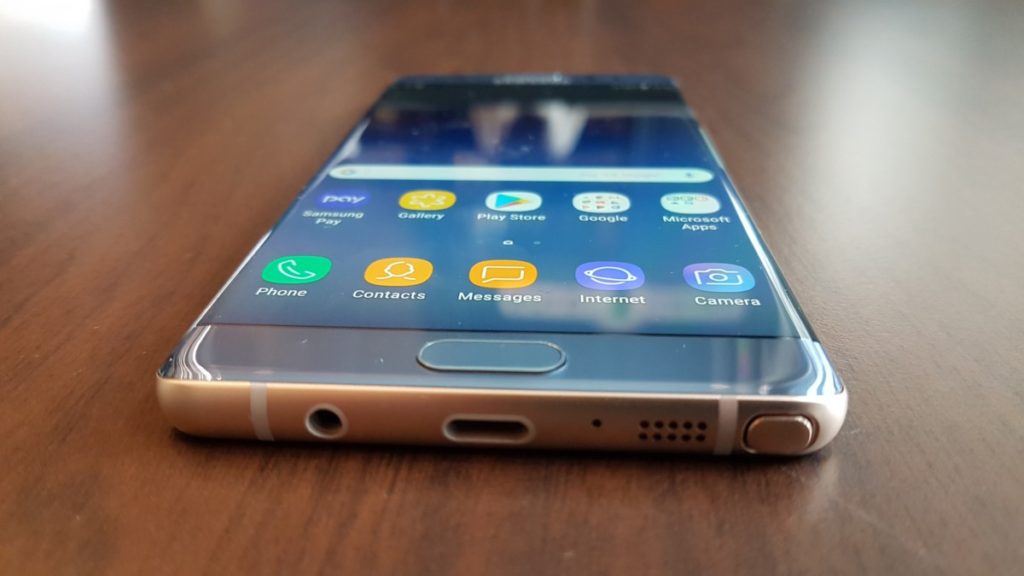 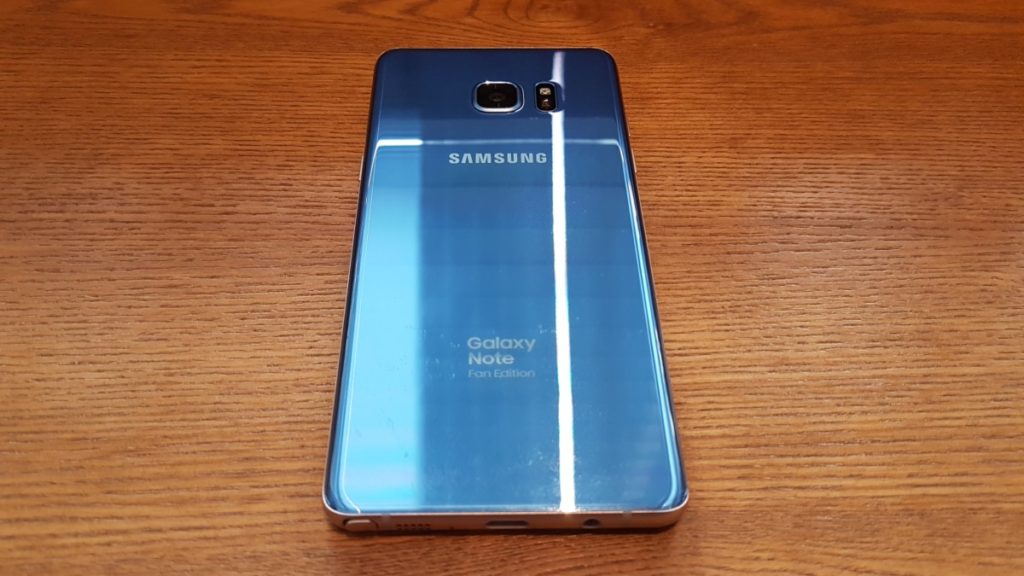 Befitting its origins, the Note Fan Edition bears the premium build quality that the marque is known for and has a exquisitely polished, distinctive look though its mirrored finish also means that it’s a fingerprint magnet that requires frequent wipe downs. On a more positive note, the Note FE is also rated IP68 for water resistance, which means that it’s able to survive a sousing in the rain

Performance
The hardware thrumming beneath the glass and steel chassis of the Galaxy Note Fan Edition is slightly dated by current standards though it’s nonetheless extremely capable in its own right. Like its generational siblings the Galaxy S7 and the Note7 from last year, the Note Fan Edition comes with a 2.3GHz Exynos 8890 octacore processor paired with 4GB RAM and 64GB of expandable storage via a hybrid SIM card slot. The phone runs Android Nougat 7.0 out of the box and comes with their recent refinements to their Grace UX user interface overlaying Nougat including their Secure Folder that replaces Knox, Samsung Pay support and Bixby Home. Unlike the Bixby Voice virtual assistant on the Note8, Bixby Home is more of a content and notification aggregator accessible by swiping from the left of your homescreen. Unlocking the phone is via the usual pattern unlock, the fingerprint reader or the iris sensor. All three options get the job done. 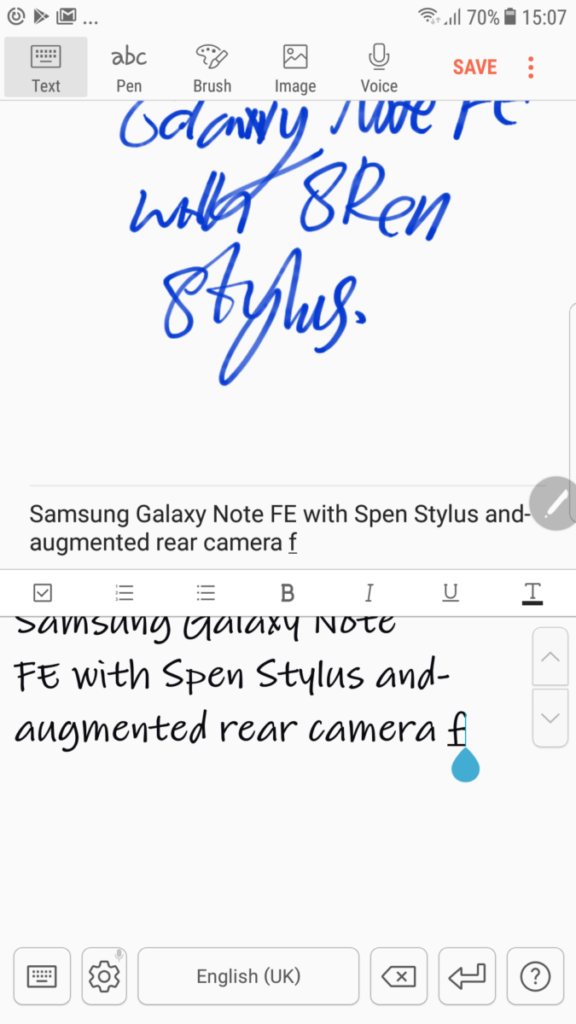 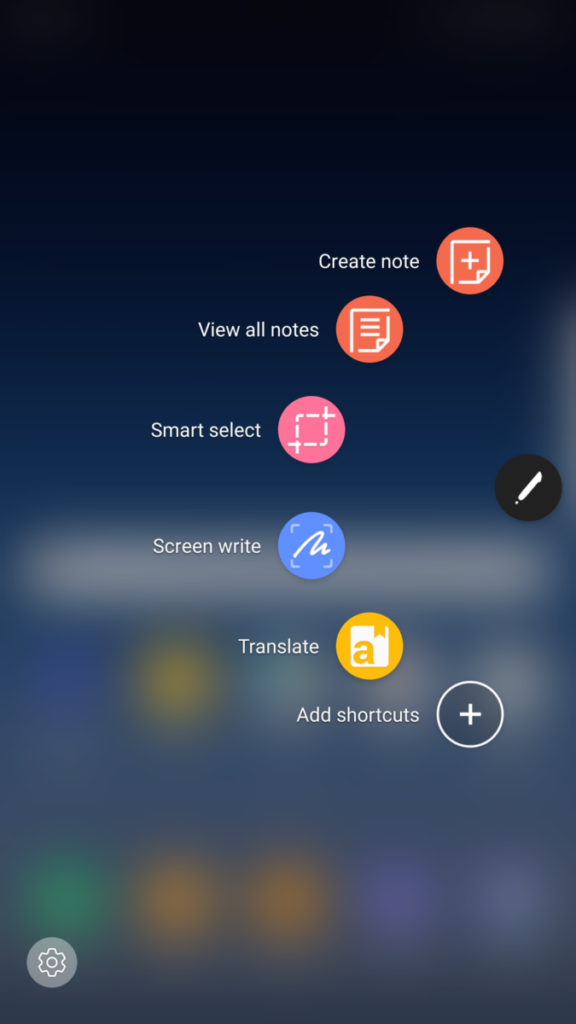 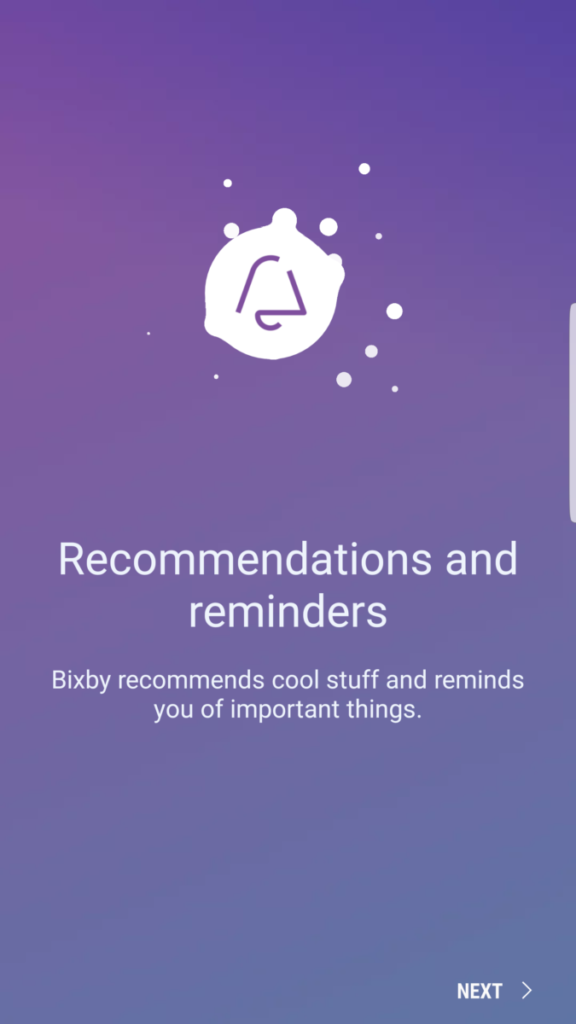 In terms of performance, the Exynos 8890 is a known high performing SoC. In 3D Mark’s Sling Shot Extreme, it scored a respectable 2,208 points. In PC Mark’s Work 2.0 test, it yielded a score of 5,591 while in Antutu it scored an excellent 141,116 points which points it in the upper echelons of phone performance though it is still outpaced by the likes of the S8’s Exynos 8895 though not by much. In synthetic benchmarks, it performed akin to other phones with an Exynos 8890 processor  like the Galaxy S7, S7 Edge and the Note7. 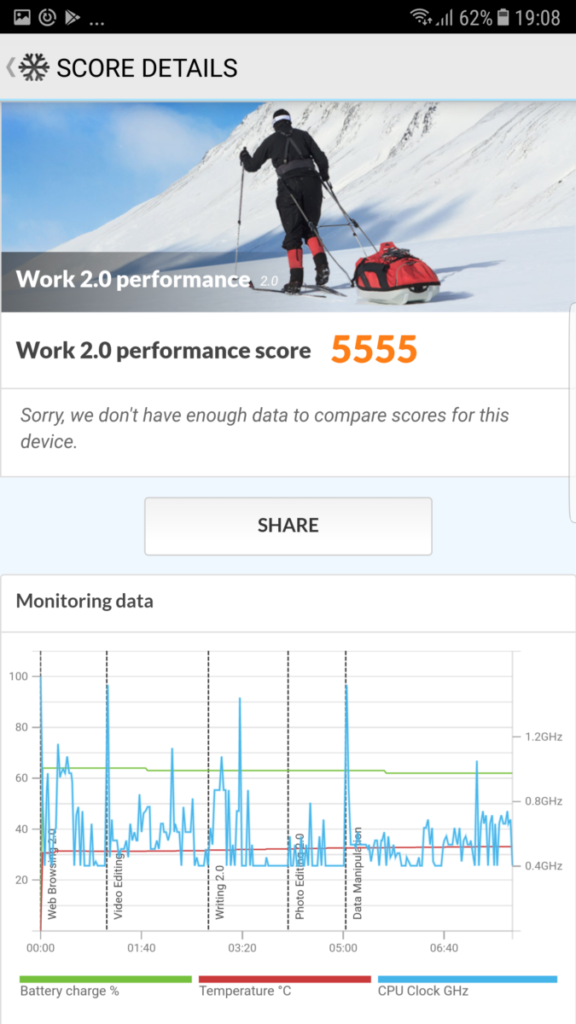 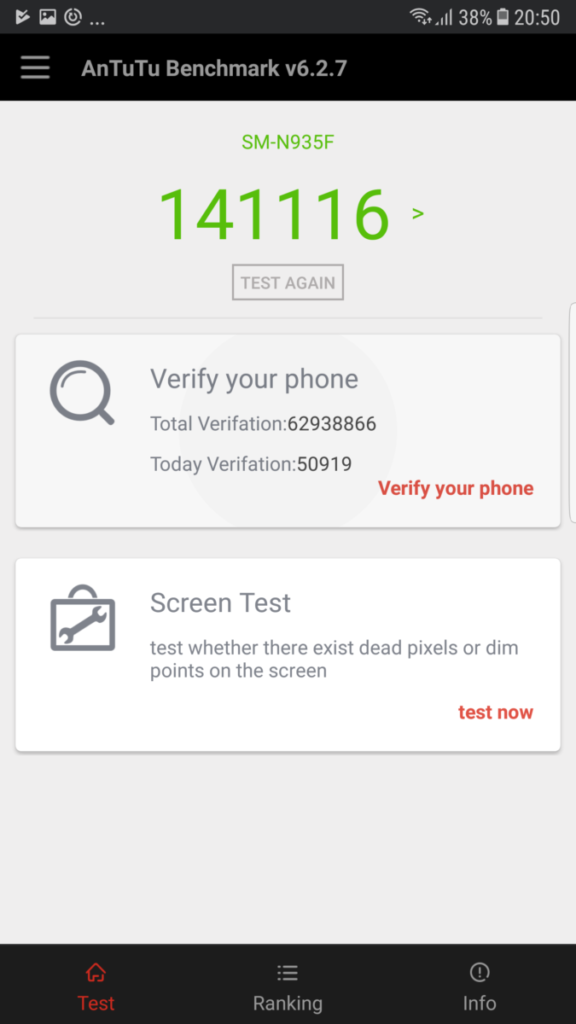 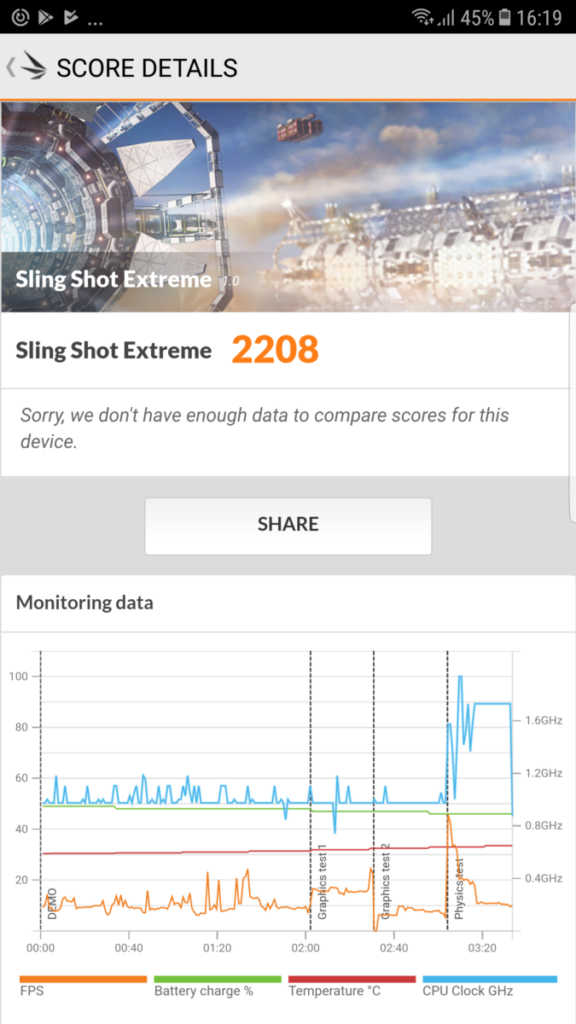 Like the Note7 and S7 released last year, the Note Fan Edition’s hardware is extremely capable and handled everything asked of it. Demanding games like Final Fantasy Awakening, Arena of Valour and Asphalt 8: Airborne ran in a silky smooth fashion with nary a hint of lag. Multiple open browser windows and Youtube videos ran smoothly with the phone tackling it all with deft aplomb. 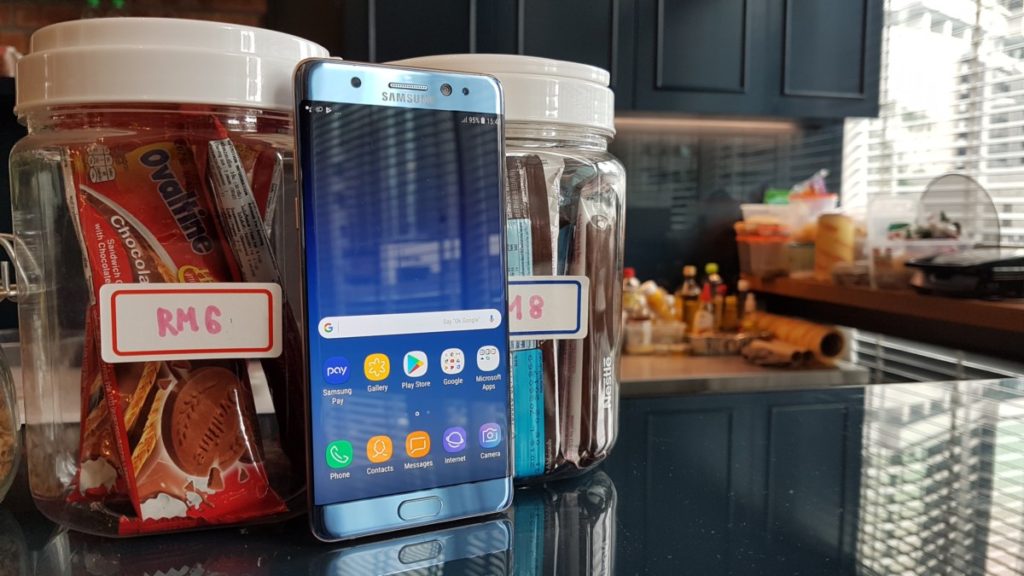 The Note Fan Edition’s Super AMOLED display, as expected served up luscious hues and pin sharp text onscreen. By default, the display is set to Full HD resolution out of the box and requires manual intervention to set it to a higher resolution though at the cost of faster battery drain. Even at 1080P resolution, the display is more than sufficient for general everyday use. The main bugbear remains unresolved in that the phone’s sole mono speaker at the base generates adequate but unexceptional audio that is sufficient for personal viewing and general music listening. 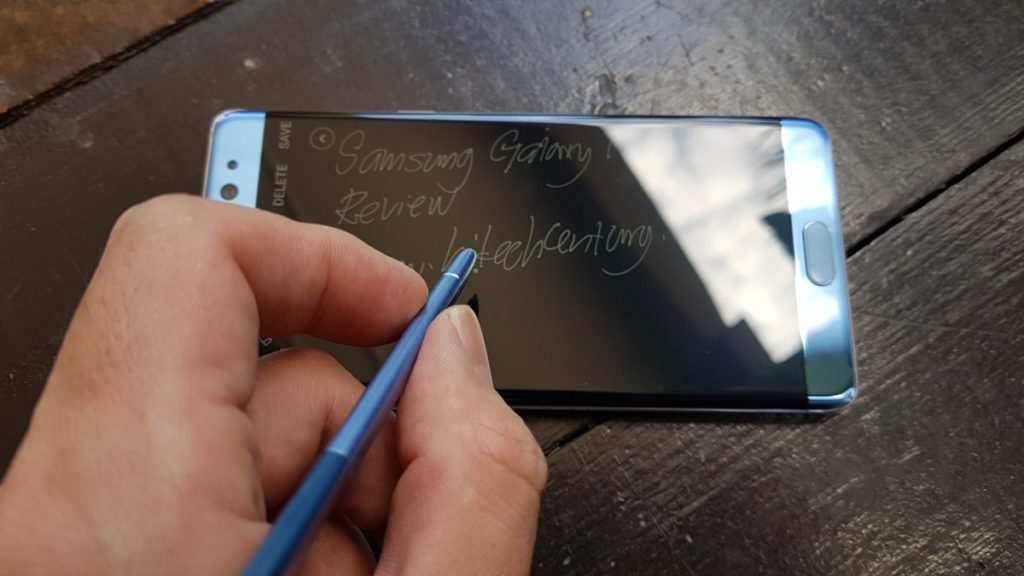 The S Pen stylus is similar to the one on the original Note7 and has a custom interface that pops up when you remove it from its stylus well. You’re able to jot down notes as needed on the display without having to open up the Note FE’s  Create Note app, which helps if you need to write down something in a hurry. Like other Note series phones, the Note Fan Edition offers quite a bit of functionality with the stylus. You’re able to Screen Write by doing a screen capture and noting down something onscreen, select and cut out a choice image or text and even, assuming you’re sufficiently skilled, doodle or sketch onscreen in a fashion much akin to a real pen with different levels of pressure sensitivity. Bar the artistically inclined, the stylus is useful for annotating and signing off on documents and adds a more intuitive feel when annotating and working on longer documents.

Camera
The Note Fan Edition has a similar camera setup as the Note7 with a rear single 12-MP camera which has Dual Pixel tech, optical image stabilisation and an F/1.7 aperture with the ability to capture 4K video as well as snaps in RAW format. This hardware setup is also emulated on the Galaxy S7 series. 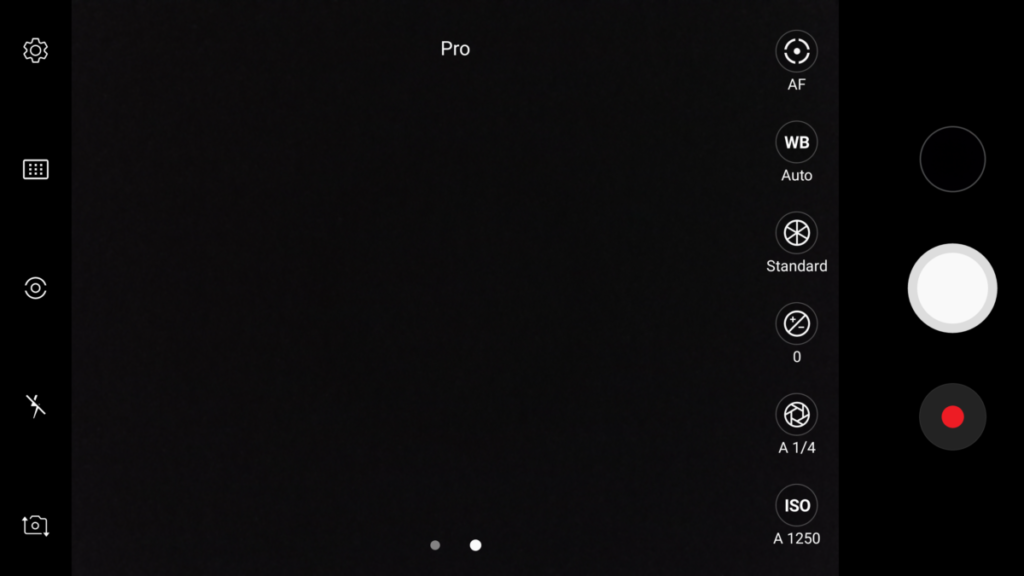 Shots are excellent in even in low light and it’s a capable snapper in all but the most challenging light conditions. Autofocus was swift and manual mode offers a host of modes to let you tweak white balance, exposure, ISO and shutter speed. Like other Samsung phones, firing up the camera is simply a matter of double pressing the home button; assuming you’ve enabled that function that is. The front selfie camera takes decent self portraits and there’s a wide selfie mode too in case you need to take snaps of a larger crowd of people. 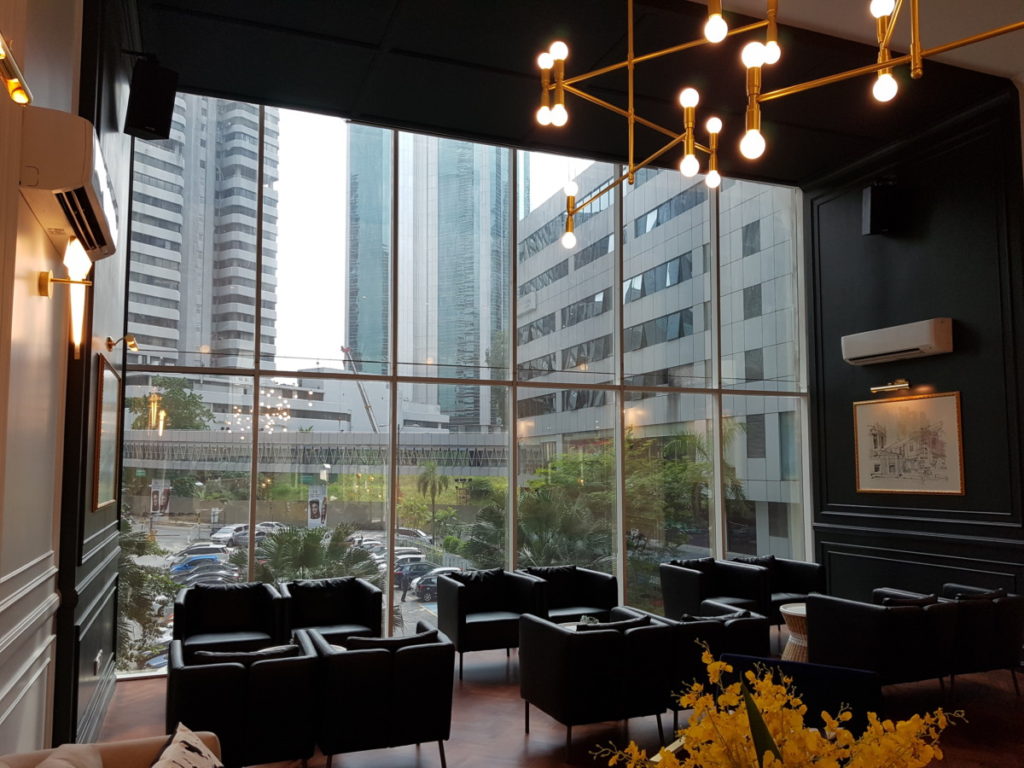 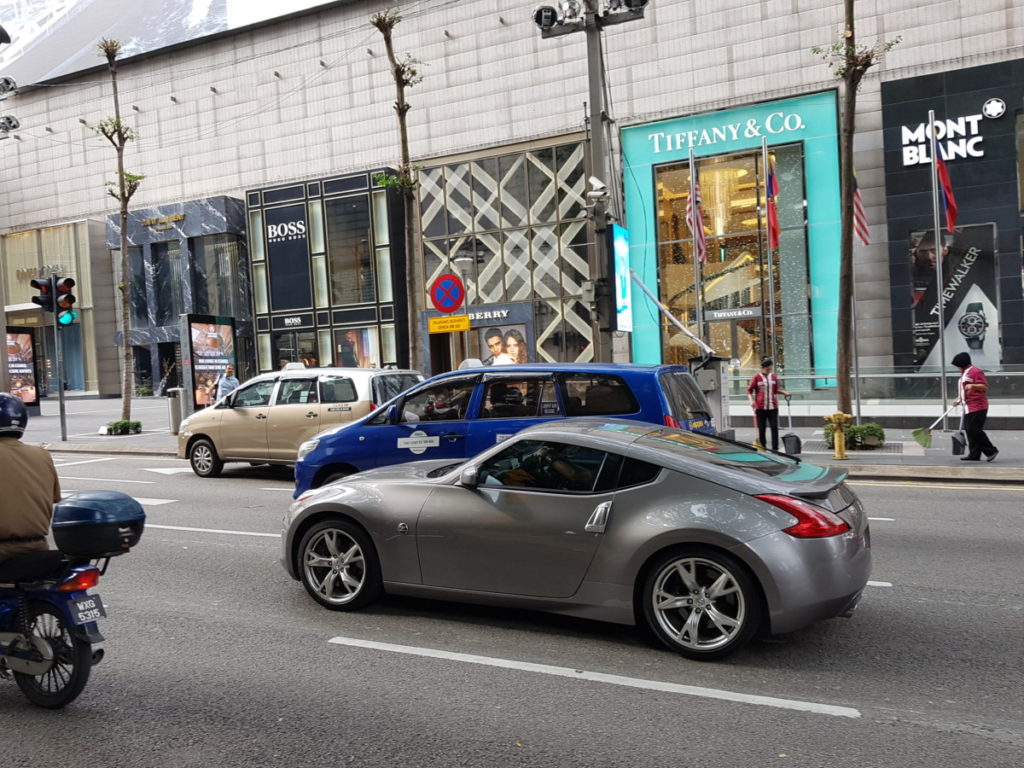 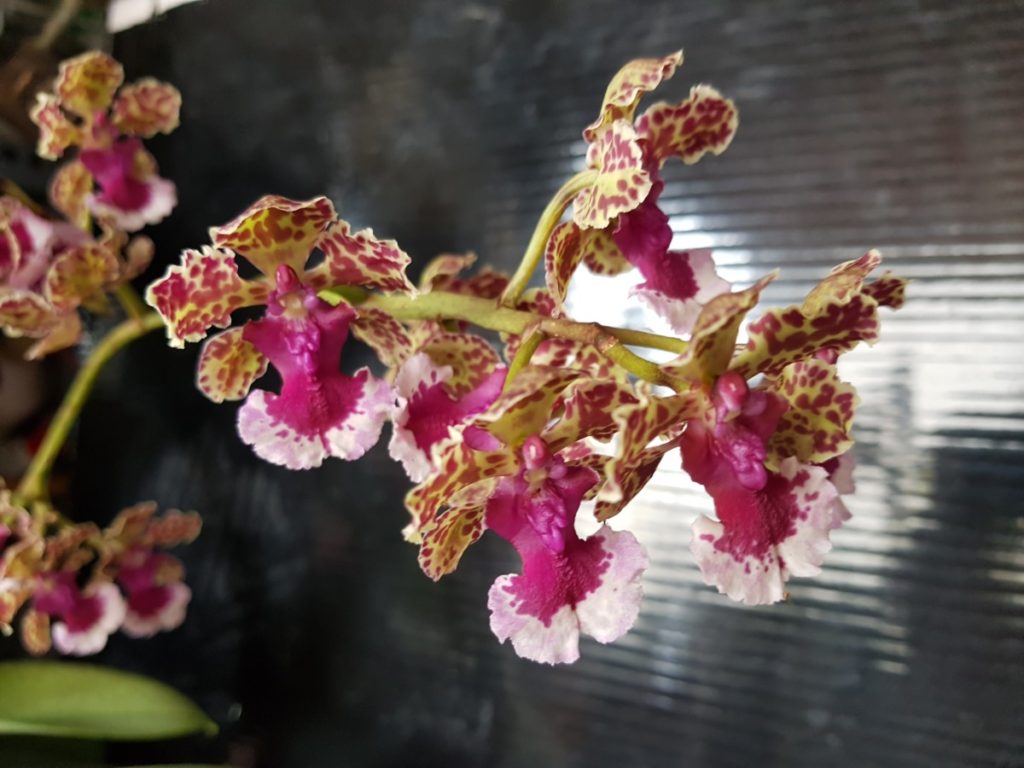 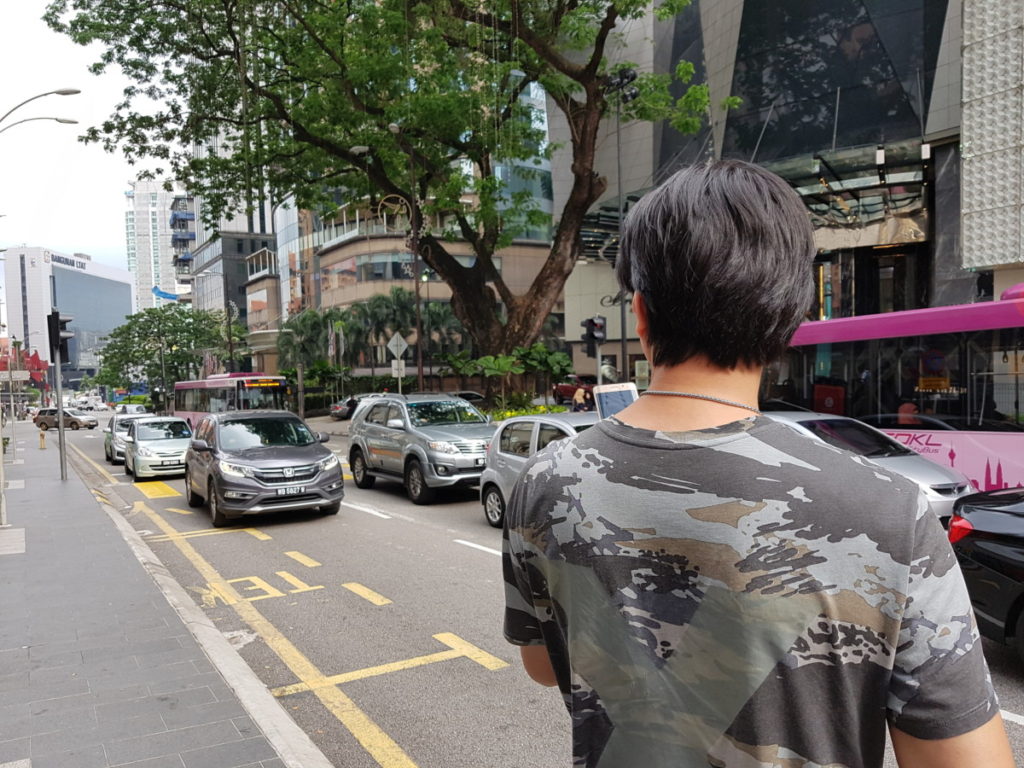 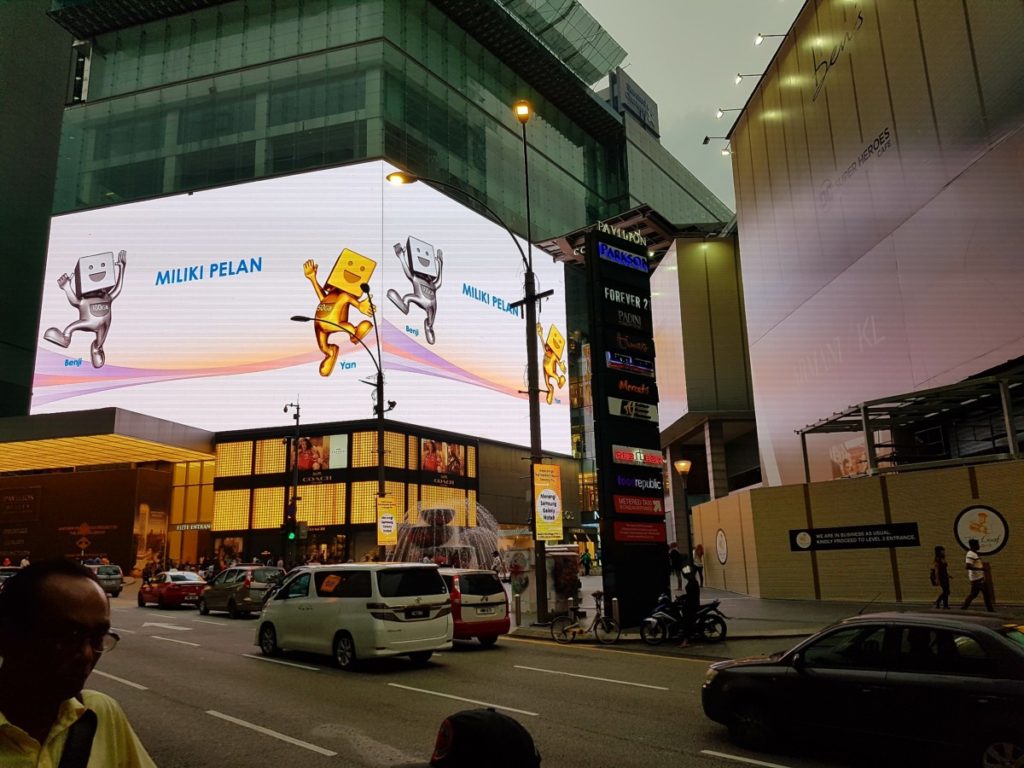 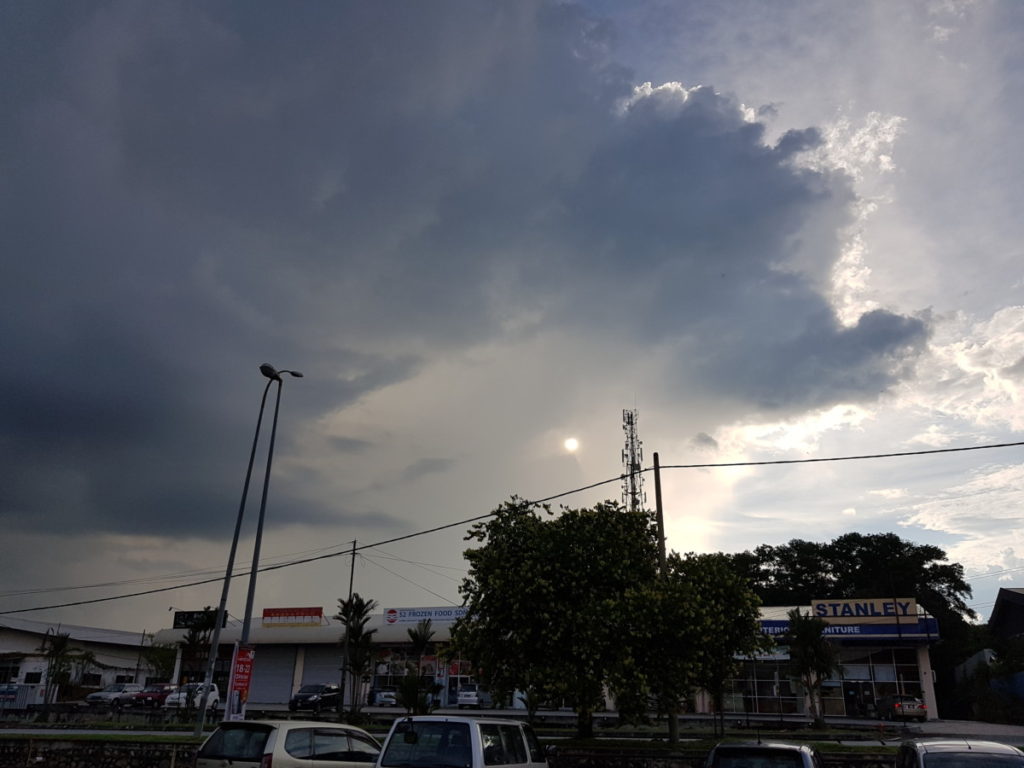 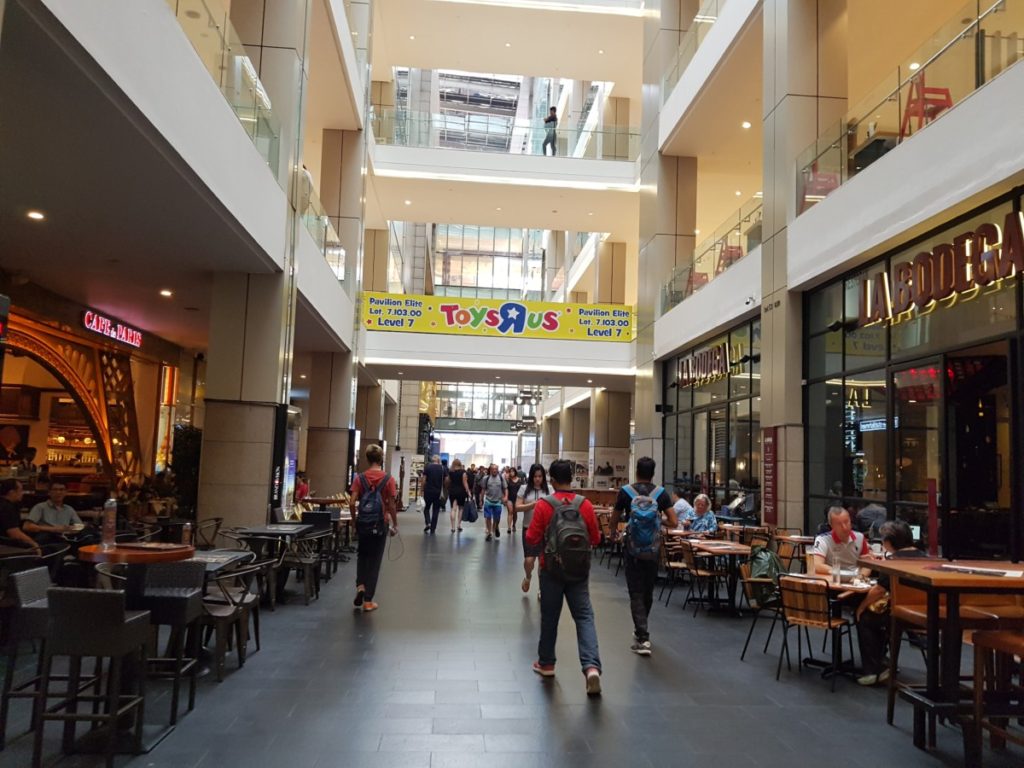 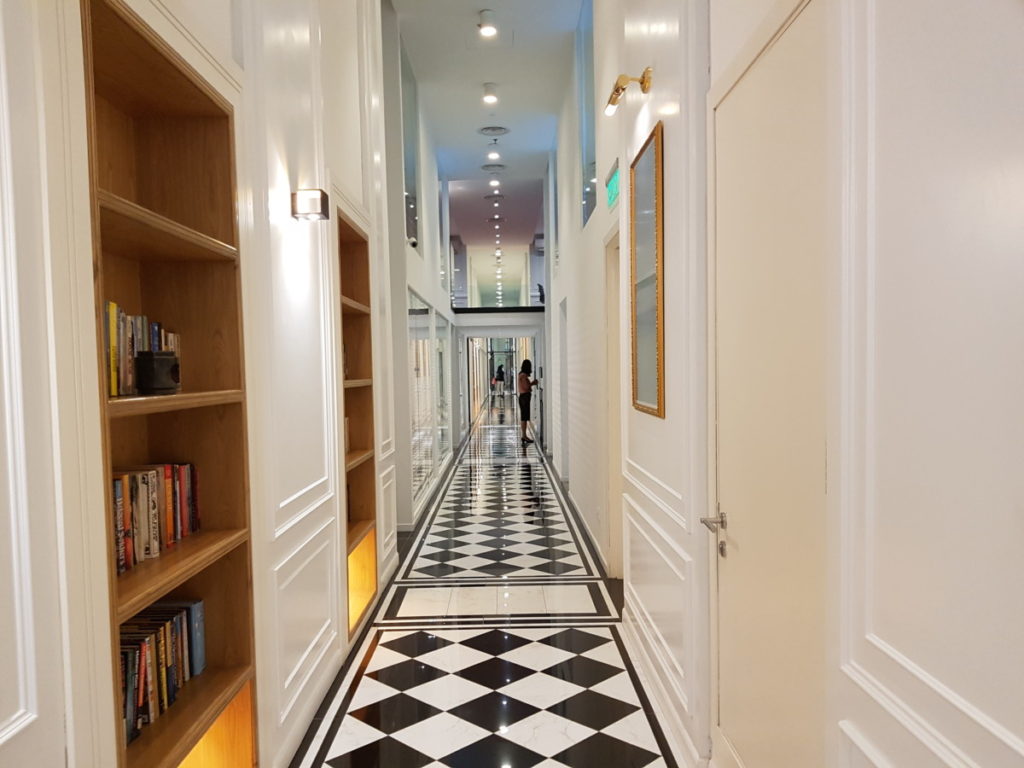 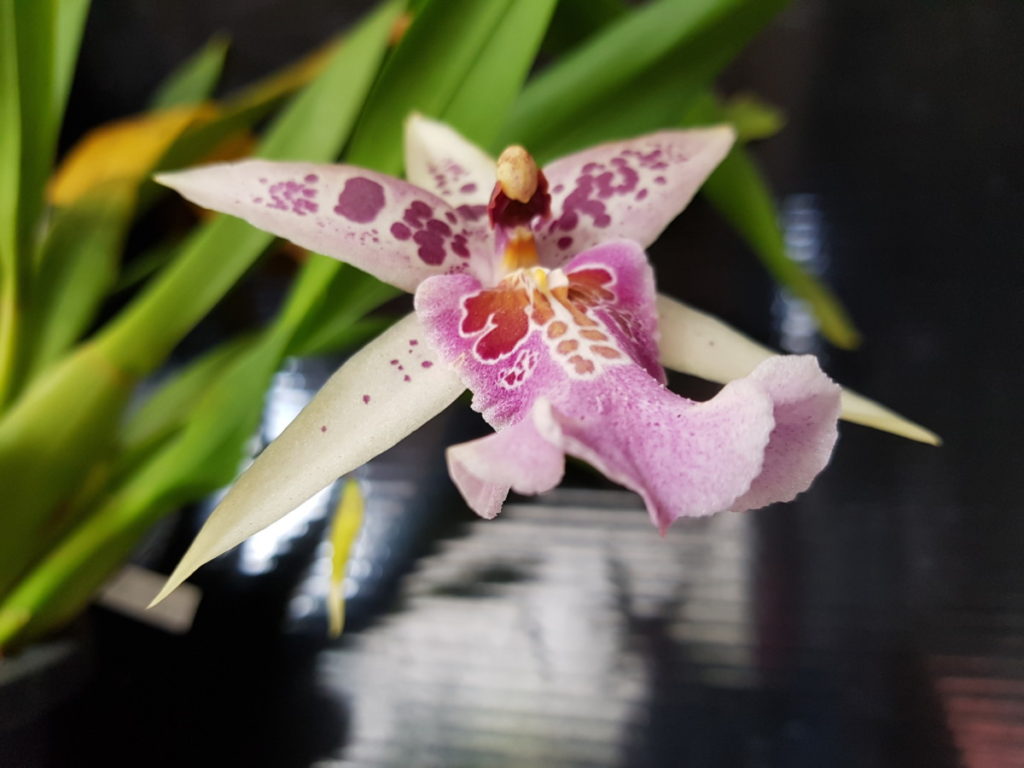 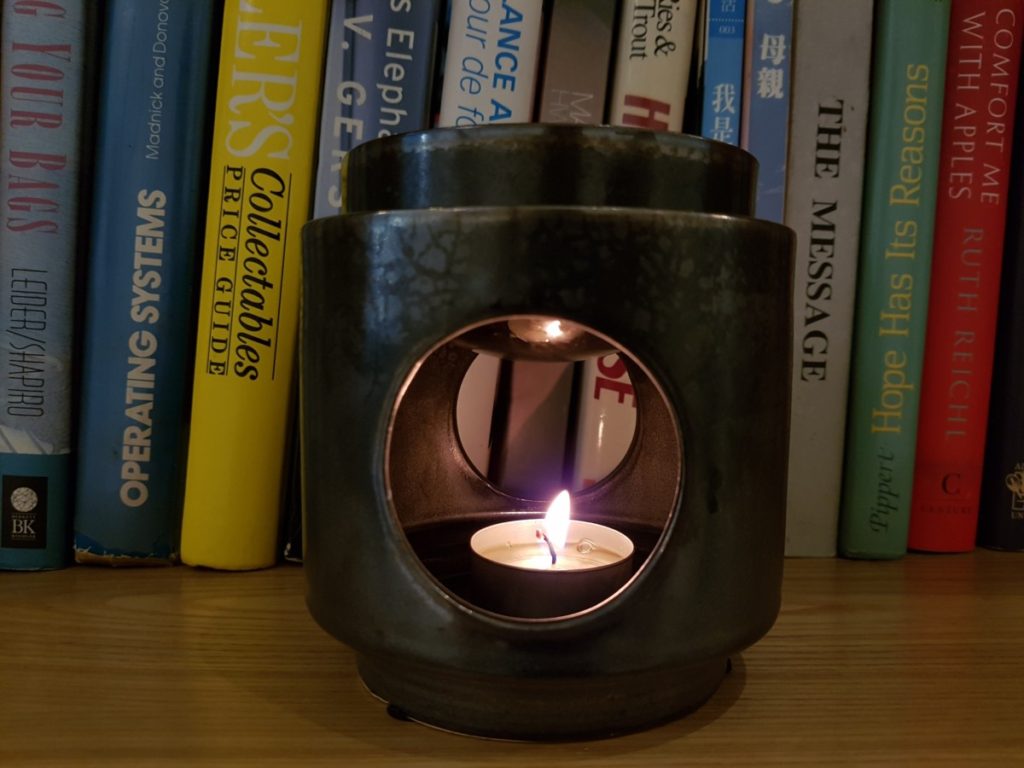 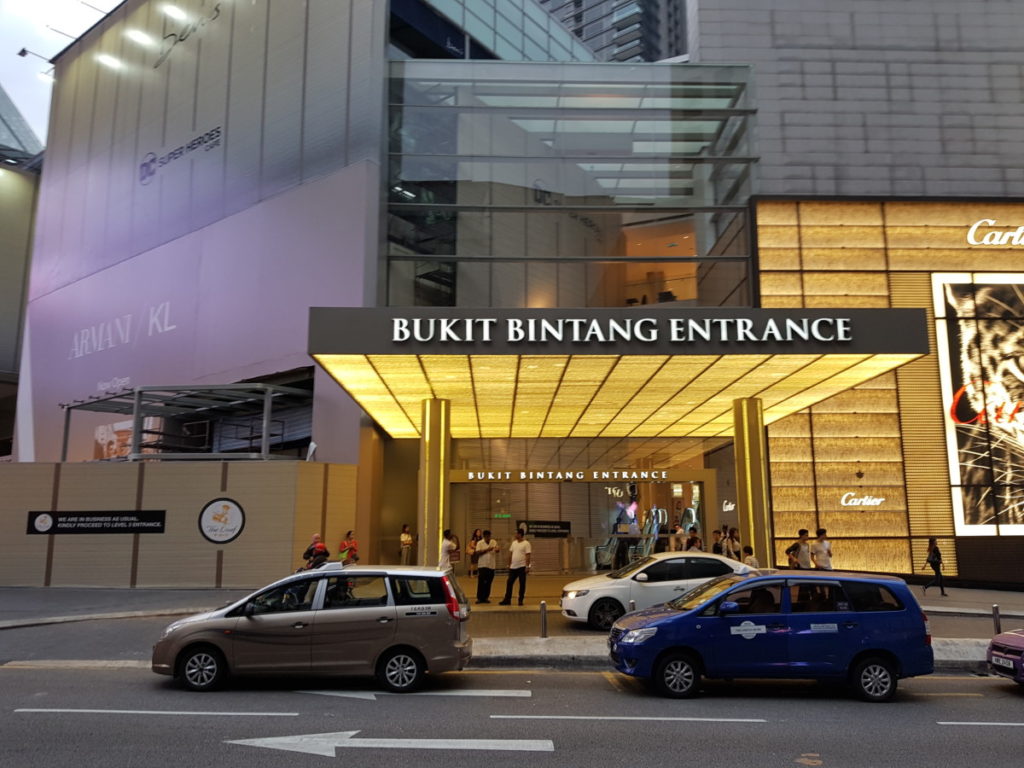 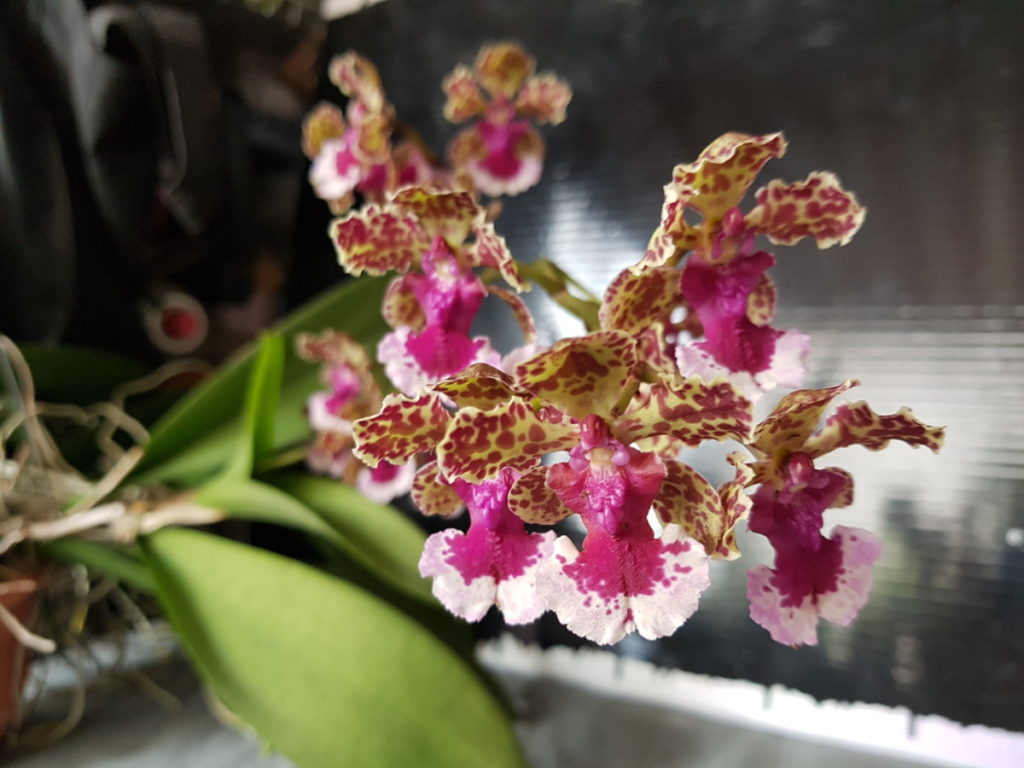 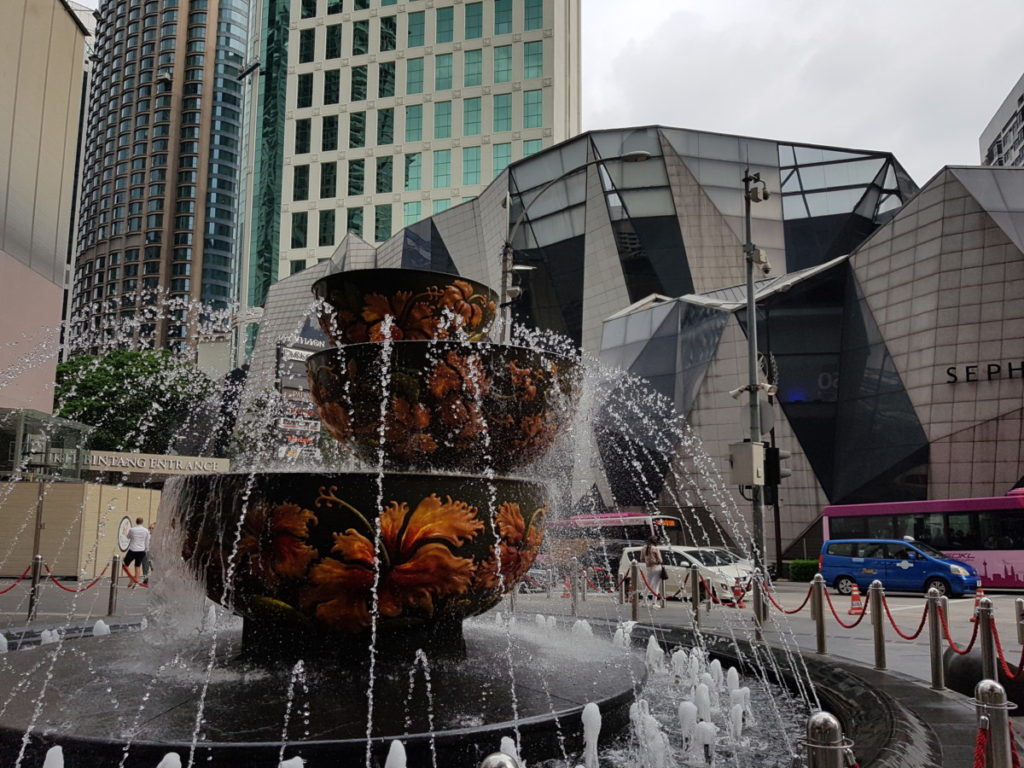 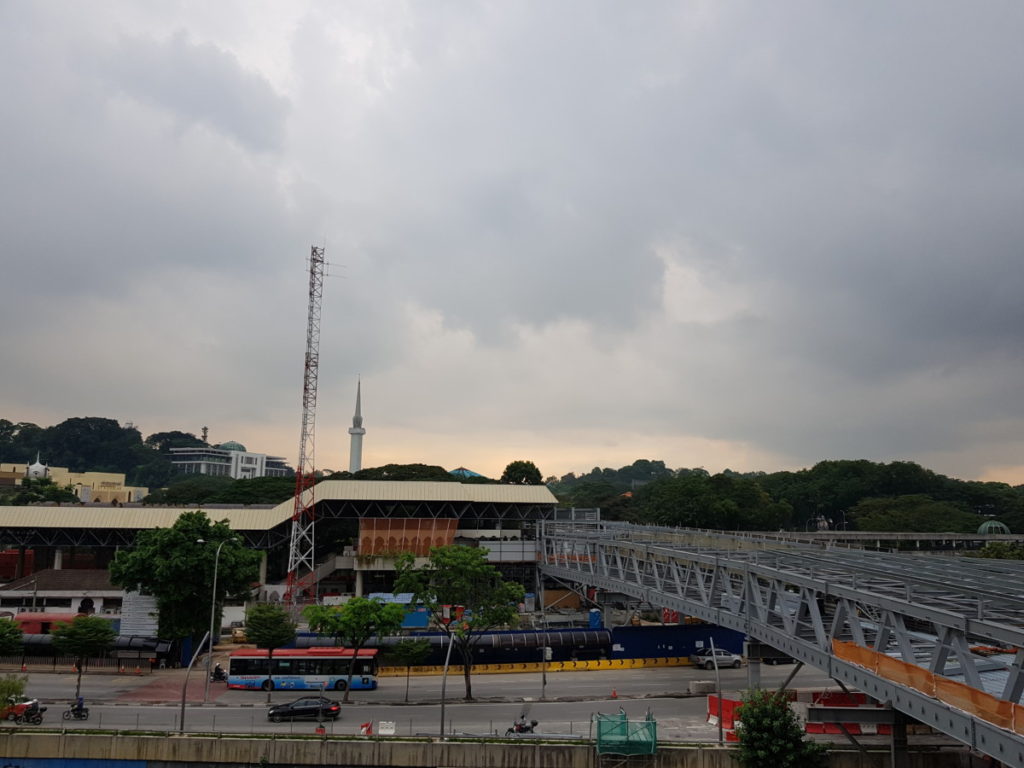 Battery Life
The question of the safety and endurance of the Note Fan Edition’s battery is likely a point of contention though Samsung has thoroughly assured users that the battery has been checked in every way and is as safe as houses. It’s slightly lower in capacity at 3,200mAh compared to the Note7’s larger 3,500mAh battery but has significantly added peace of mind. Across the two weeks of testing with heavy use across a variety of scenarios, the Note FE did not exhibit any untoward behaviour even when charging and discharging. 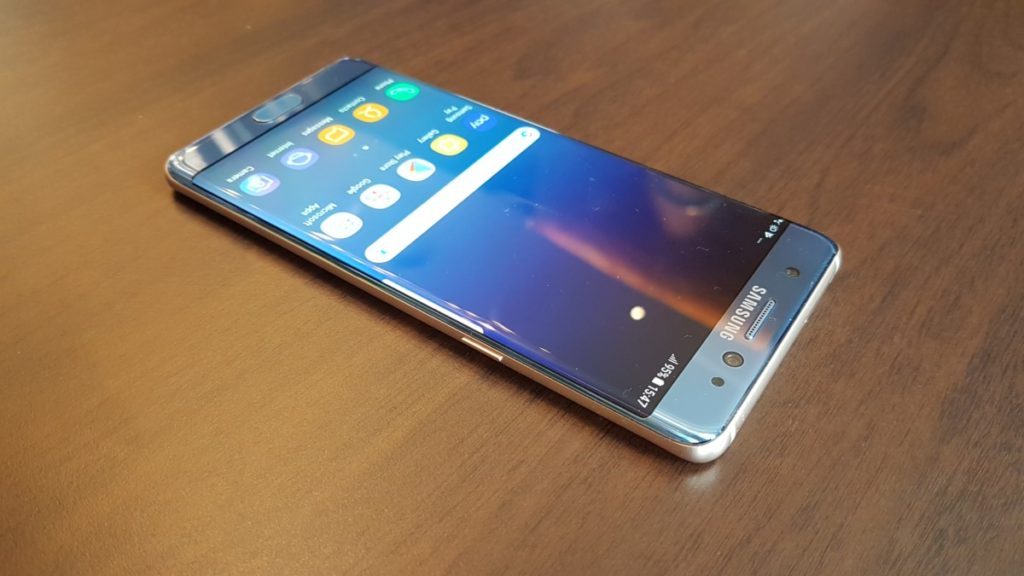 In terms of endurance, the phone lasts a full day if you’re a modest user even with the reduced battery capacity though heavy users will likely need a top-up at sundown. Fortunately, the phone supports fast charging so you can juice it up at the mains via the provided fast charger before the commute home. Prudent users away from a wall plug will likely need to tote around a power bank just in case though you can significantly extend endurance via all the usual power saving modes and keeping screen resolution to 1080P and under.

Price and Conclusion
The Galaxy Note Fan Edition is certainly an interesting proposition as it arrives at the same time that the Galaxy Note8 is ruling the roost as the de facto phablet in Samsung’s current line-up at a price point that’s equivalent to the now decommissioned Galaxy Note 5 at RM2,599. 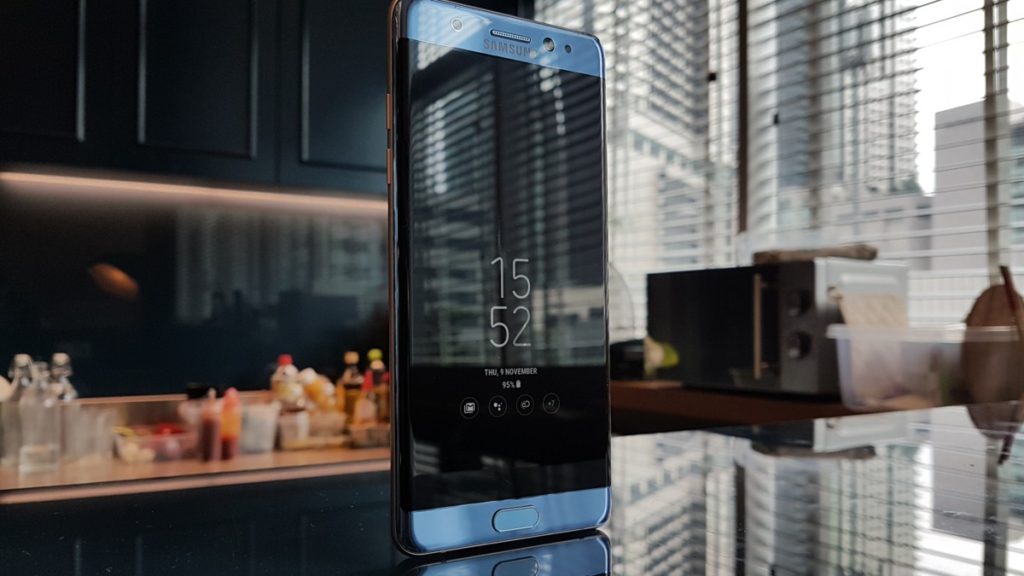 At its intended price point, the Note Fan Edition has most of the major features that make the Note8 an impressive phone for power users – an iris sensor, an impressive though single sensor camera, the S Pen stylus and Samsung Pay support – though at a lower price point. If you’re wanting to get in on what Samsung’s phablets have to offer but can’t chunk out for the impressive price tag of the Note8, this proves to be a competent and affordable alternative. For a limited time till 31 December 2017, any purchase of a Samsung Galaxy phone including the Galaxy Note Fan Edition also gets you 20% off the base fare when you buy a ticket at AirAsia X. Swing by www.samsung.com/my for more details.

What We Liked Excellent rear camera, S Pen stylus, Samsung Pay, superb Super AMOLED display
What We Didn’t Average battery life, finish is a fingerprint magnet, lacks Bixby voice
We Say A competently made, superbly specced rework of the erstwhile Galaxy Note7 that acts as a more affordable alternative to the Galaxy Note8. A superb rear camera, a responsive stylus and excellent overall performance make it a highly desirable acquisition for power users on a budget.