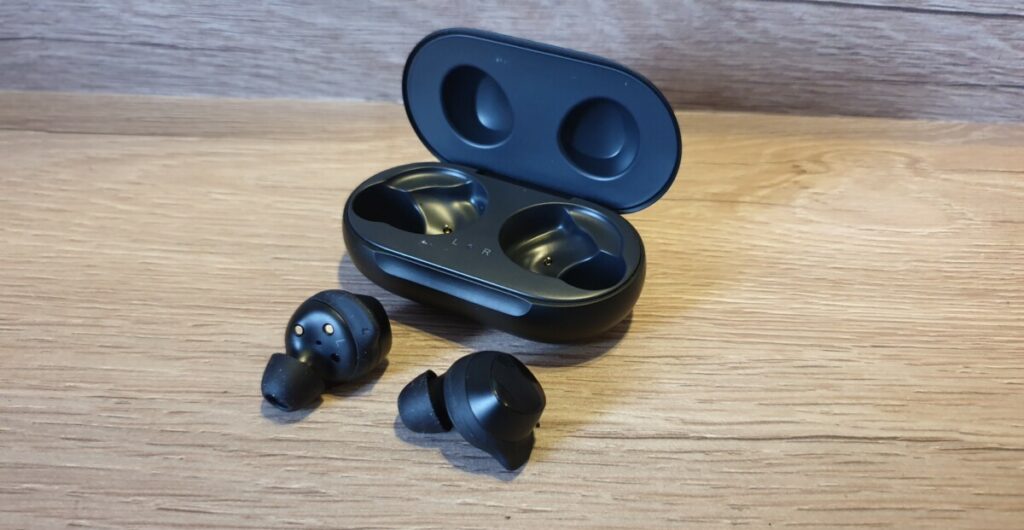 Externally, what you have is a mostly flat pill-shaped charging case that pops open to reveal a pair of earbuds, each nestled in their own recessed charging dock. There’s a bit of customisation available as Samsung has thrown in a set of interchangeable wing tips and ear buds to tweak the fit to suit your ear canals. 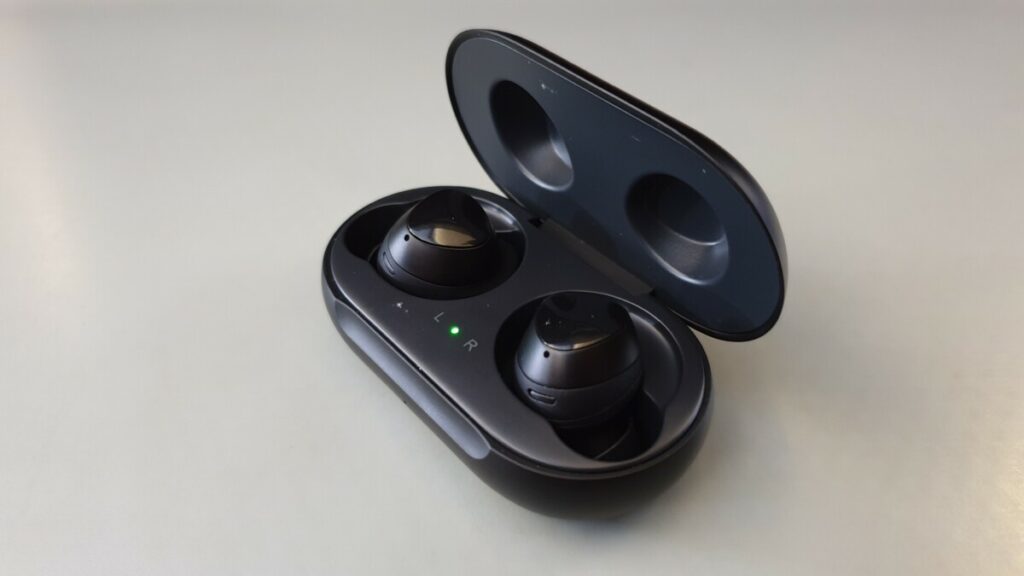 Our test unit came in a shade of matte black for both the earbud pieces and the charging case itself though the Galaxy Buds are also available in a shade of white and a startlingly bright yellow. Each of the ear buds features a triangular touch control on each side and is compact enough that they comfortably fit into your ear with some minor adjustments.

The case itself is quite compact and is also able to wirelessly take a charge off the Galaxy S10 series phones on account of their aforementioned PowerShare feature by plonking it on the back of the S10. You can also hook it up via a USB Type C port in the back of the charging case for direct charging from the mains. 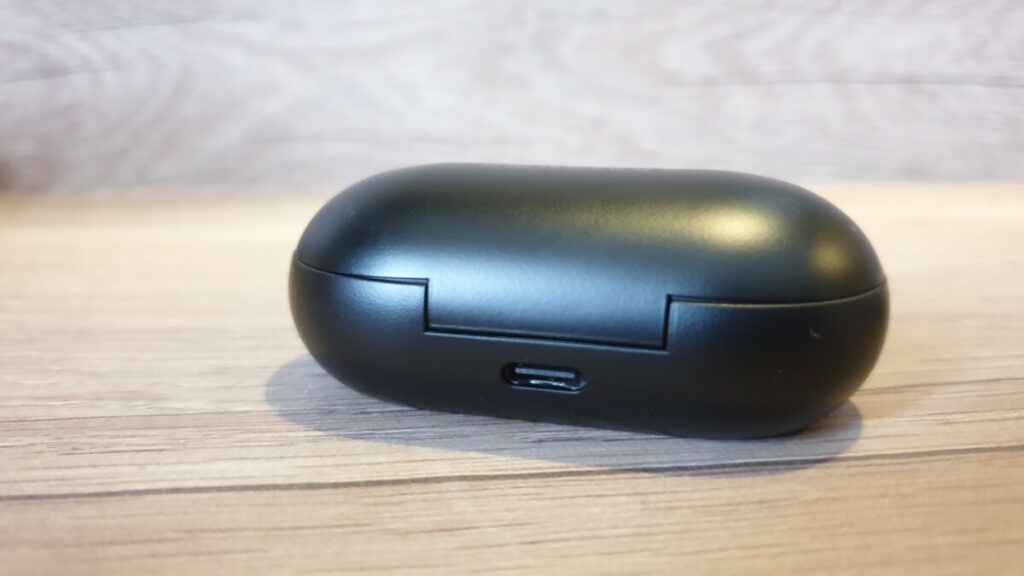 Fortunately, the design of the case itself is slim enough that it’s able to fit into a pocket without undue trouble and features gentle curves to avoid it snagging onto clothing. Up close, the Galaxy Buds charging case has a series of light-up indicators inside the case and outside that tell you if the case and the earbuds within are charging or charged. On paper, the Galaxy Buds are able to offer about six hours of music playback with the charging case hosting enough juice for one full top-up.

Setting up the Galaxy Buds

Getting the Galaxy Buds set up for the first time will require you to jump through a few minor hurdles but if you have a Galaxy S10 series phone, it’ll pair up easily in a matter of minutes. If you have slightly older kit like a Galaxy Note9 or S9, you’ll need to fire up Bluetooth and the Galaxy Wearables app to get it up and running but this itself didn’t take any measurably longer time. After the obligatory firmware updates and a quick tutorial walkthrough, you’re mostly left to your own devices. While it seems daunting, navigating the menus are straightforward in the Galaxy Wearable app and you’re given a helpful interface that tells you how much battery life is left in the left and right earbud, a series of five equaliser presets to choose from with your choice of Bass Boost, Soft, Dynamic, Clear and Treble Boost.

The pickle here is that each touchpad is rather limited in terms of versatility as it only has one control surface. Where more sophisticated offerings have a means to control volume up and down by tapping certain parts of the ear bud, the Galaxy Buds only has one surface on each earbud that you can interact with. This results in a rather bizarre way of controlling things and basic requirements like volume up and volume down need to be separately assigned to the left and right ear buds for it to work.

Once you’ve gotten the quirks in its functionality worked out, it proved to be a rather capable pair of buds. Donning them was a pain-free experience and they were light enough at 5.6g per ear bud and comfortable enough that using them for several hours a stretch was a comfortable affair. They also proved exceptionally secure as well and over the course of several weeks, they’ve stayed secure even with several frantic dashes for the commute.

Assuming you’ve fitted them on properly, the Galaxy Buds offer a good amount of passive noise insulation which can be a hazardous proposition if you’re attempting to avoid traffic which is why they’ve included the aforementioned Ambient Sound mode that lets the speakers filter in external sounds; quite literally a life saver . 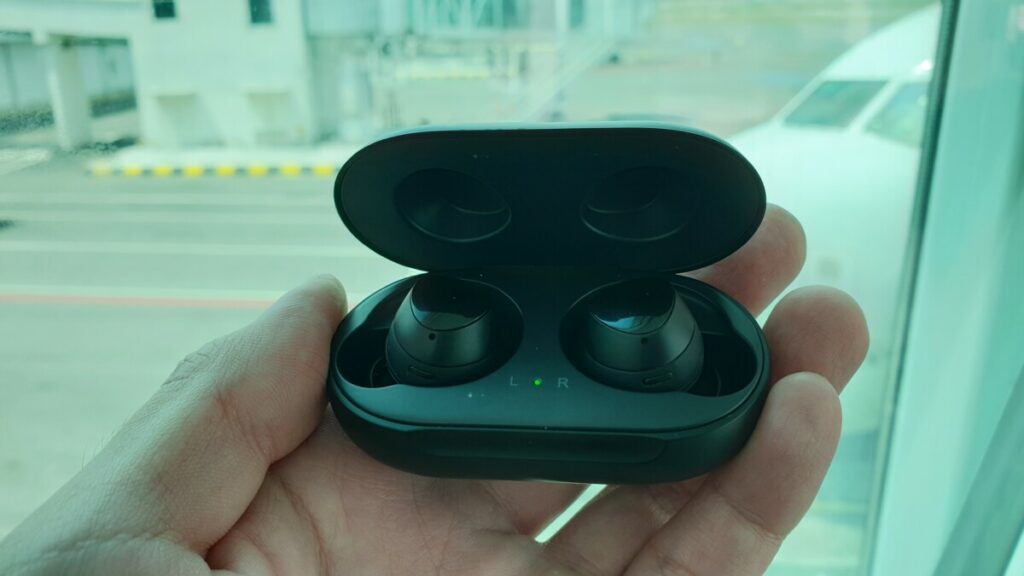 In terms of audio performance, the Galaxy Buds benefit from Samsung’s acquisition of AKG and have a generally solid performance with a fair handling of lows, mids and highs though bass isn’t exactly the punchiest available while the soundstage is somewhat on the flat side. Out of the five preset equaliser settings available, we got best results from the Dynamic setting where it adds a bit more aural punch and makes the modest soundstage a little bit more expansive. 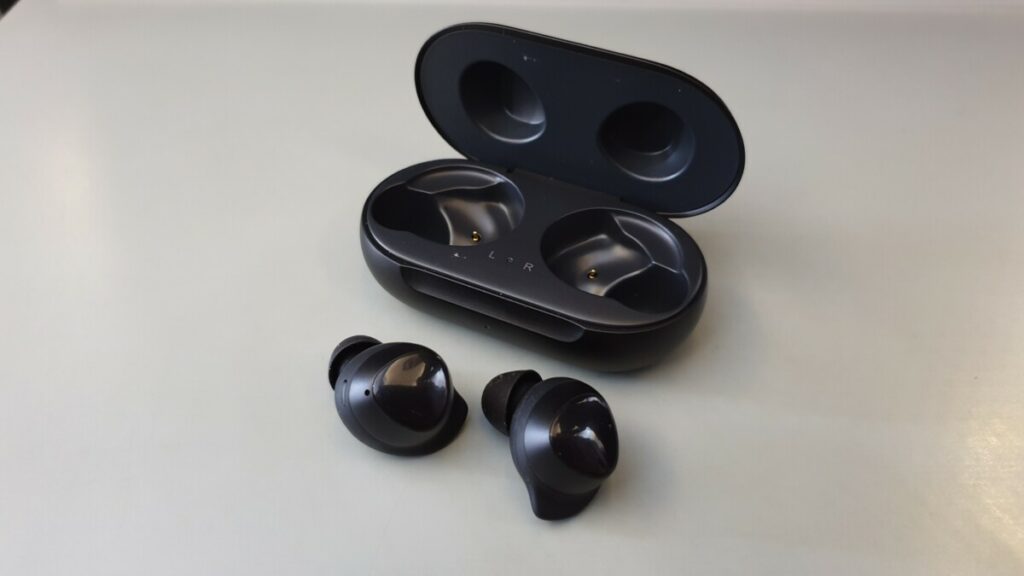 Bass heavy tracks like Bear McCreary’s Prelude to War seemed to lack punch though less intensive tracks like Joanna Wang’s ‘Vincent’ were handled well while Pink Floyd’s ‘Time’ seemed underwhelming with its signature opening sounding muted. As it stands, it works best with mainstream music – contemporary tunes, K-pop, the usual plethora of mando-pop ballads and the like so it should suit the vast majority of users out there.

Call quality is fortunately excellent on both sides on account of Samsung’s dual adaptive microphones which are located on the inside and outside of each earbud with good overall voice clarity.

At full charge, you can expect a good six hours of use for the Galaxy Buds without a full recharge from the provided charging case on standby. In practical use, we managed a good five and a half hours with Dynamic EQ settings on and constant music playback at 75% of maximum volume along with a few voice calls thrown in for good measure. While most of the competition offers at least two or three more charges via their provided casings, the Galaxy Buds offered more than enough endurance for general users. 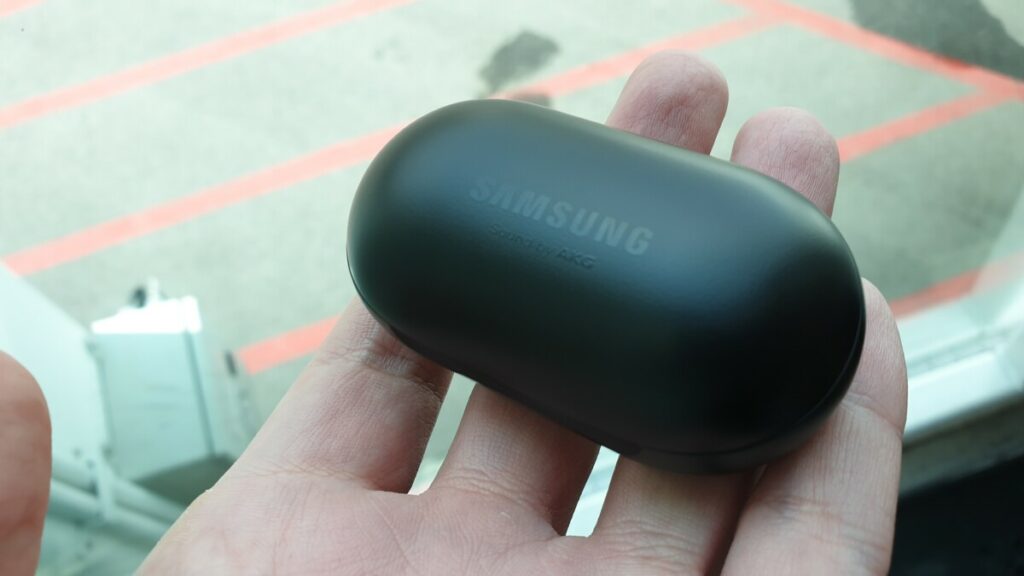 As it stands, the Galaxy Buds are a tempting proposition for Android users, more so for those owning a Samsung phone like the new Galaxy S10 or S10+ with decent audio performance, a modicum of comfort and good battery life. While getting the best out of the Galaxy Buds requires you to own a Samsung phone, it’s nonetheless a reasonably affordable proposition for those looking for a pair of wireless buds.

What we liked Seamless PowerShare wireless charging, comfortable earbud design, good battery life
What we didn’t Middling bass, fiddly touch controls
We say The Samsung Galaxy Buds prove to be a fairly comfortable pair of decent wireless earbuds that offer a modicum of comfort, fairly good performance and battery life though the fiddly touch controls take some getting used to.