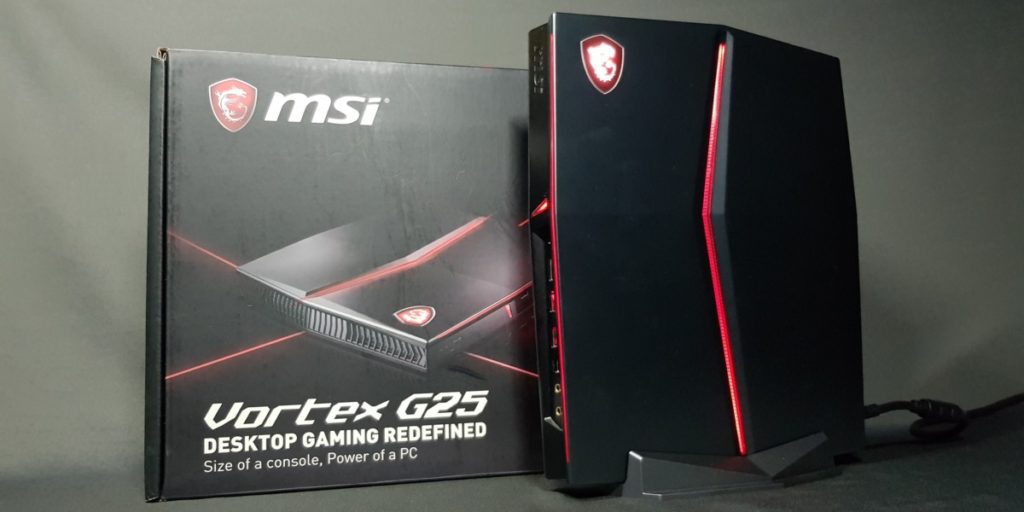 When you lay eyes on MSI’s slim looking Vortex G25, you’d be forgiven for thinking that it’s some newfangled console that’s stolen a night march on Sony’s PS4 though the G25 is ultimately a gaming desktop through and through in every way. It’s also one of the slimmest and lightest 4K-gaming ready and VR-capable ones to boot. 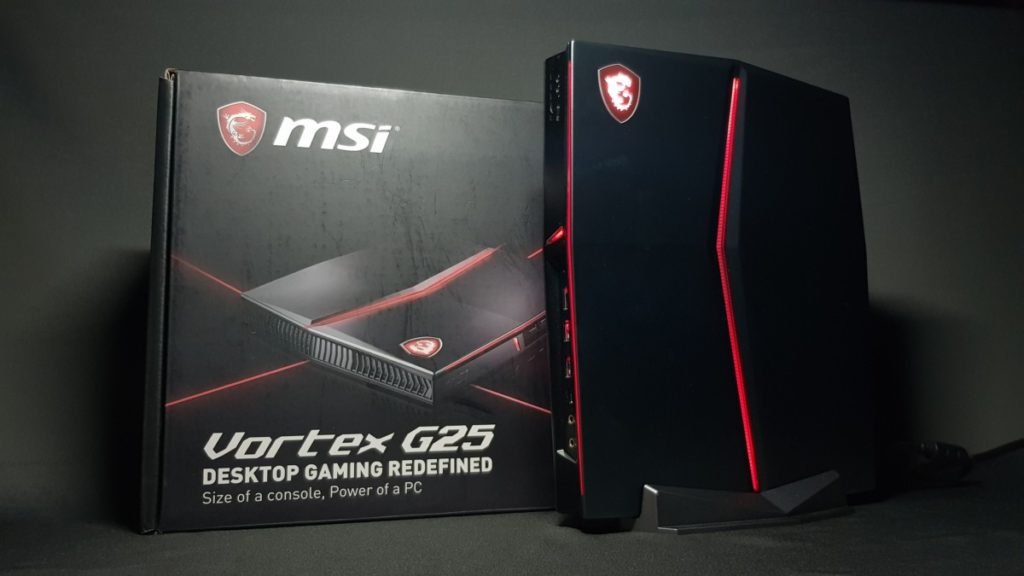 Interestingly enough, its designation wasn’t chosen on a whim by MSI. The ‘G’ prefix indicates that it’s a gaming rig while the 25 code in its name is a callback to its weight as well as its total volume (it’s also 2.5 litres). The VR suffix is, as you’d likely surmise, there to indicate that it’s capable of supporting VR content. 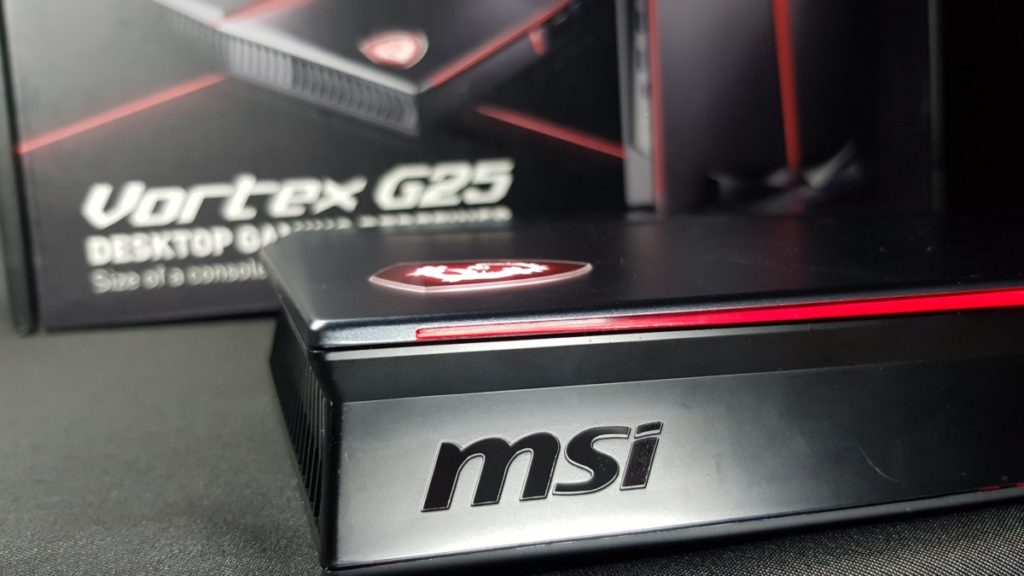 Externally, the Vortex G25 is a relatively flat, rectangular design hewn of lightweight aluminium and plastic with the shape and dimensions of a contemporary gaming console. Compared to many gaming desktops in the market, the G25 is considered relatively light and svelte at 35mm thick and 2.5kg as gaming desktops go as its contemporaries usually mass far larger and are significantly chunkier affairs. 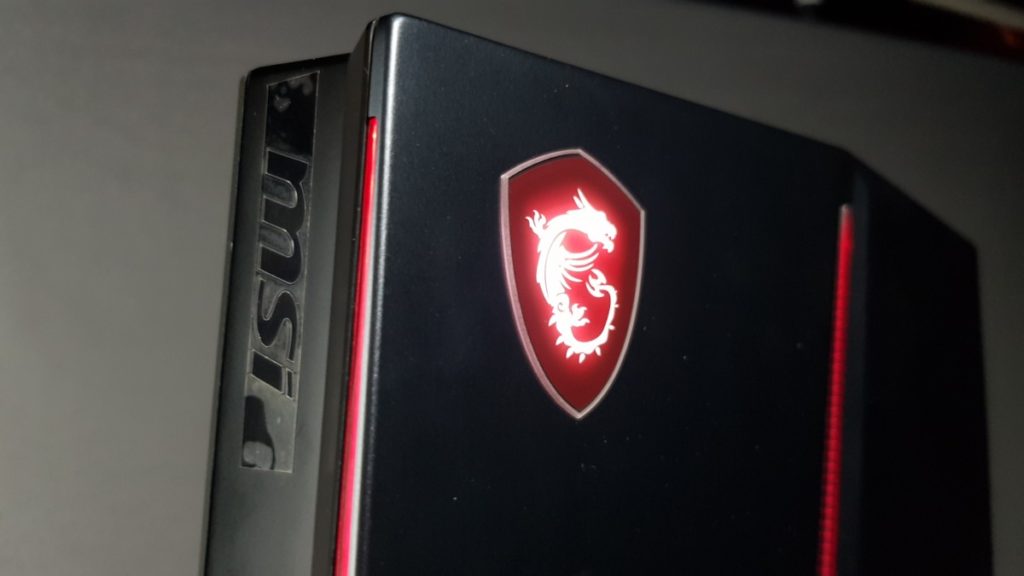 The external finish of the G25 retains MSI’s usual matte black livery with their distinctive dragon logo emblazoned on the side along with a strip of crimson LED lighting. Both the dragon logo and strip light up when the G25 is turned on with a steady glow. The matte finish is suitably hard wearing and repels fingerprints nicely while lending it a classy, understated look. 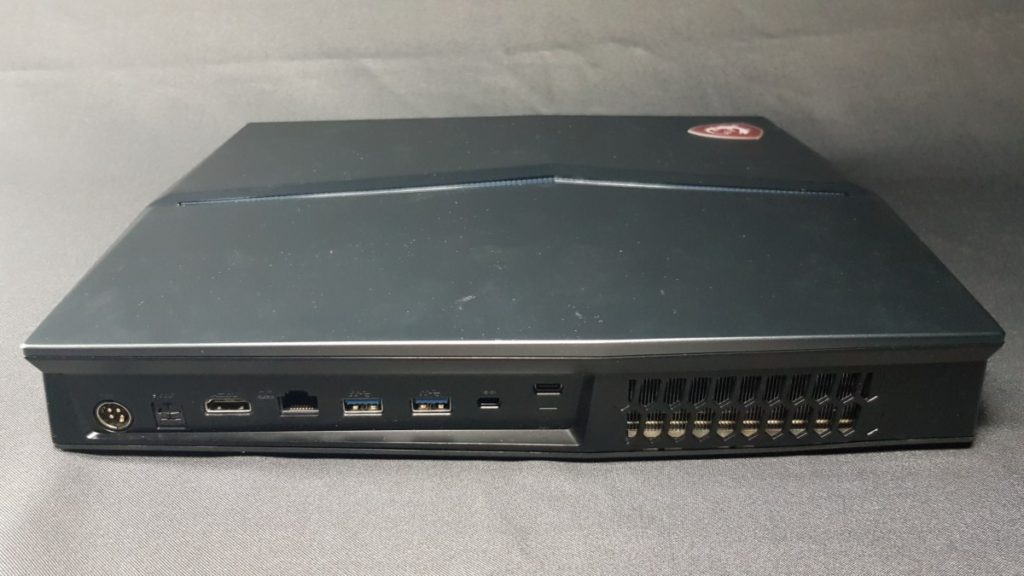 While a great deal of emphasis has been placed on making it as slim and as fetching as possible, MSI hasn’t neglected the ergonomics of the G25’s chassis design. The PC has the option of being placed flat, stacked vertically via a provided rubberised base and even mounted to the back of a monitor via a VESA mount port on the back panel of the PC. 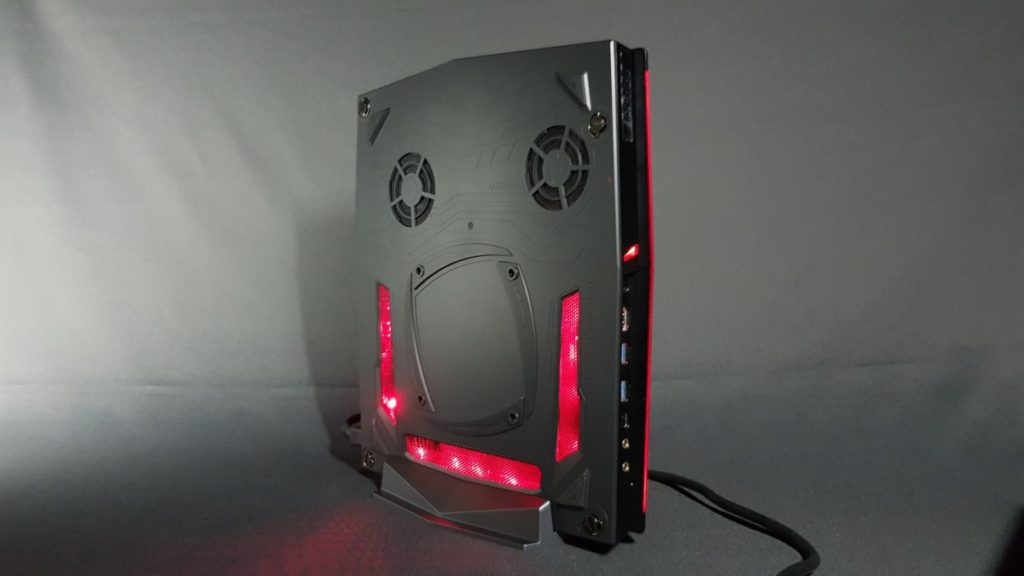 The back panel also has ventilation grilles for the dual cooling fans built into the base plate of the rig. Regardless of how you mount it, MSI has placed all its ports in an accessible fashion on both sides of the G25 with the rest of the sides of the chassis devoted to ventilation grilles to keep the whole affair briskly cool even when undertaking intensive gaming.

Evenly allocated along the sides of the chassis are a pair of HDMI ports, a quartet of USB 3.0 ports, a USB Type C USB 3.0 port and a Type C USB 3.1 port with Thunderbolt 3 support so you can conceivably output to three 4K monitors at a time (2 via HDMI and one via Thunderbolt) with the G25 as well as making deployment of VR gaming kit like the HTC Vive or Oculus easier. A particularly helpful touch on the G25 is that each of the ports is partially illuminated from the internal LEDs so you can find them in the dark. 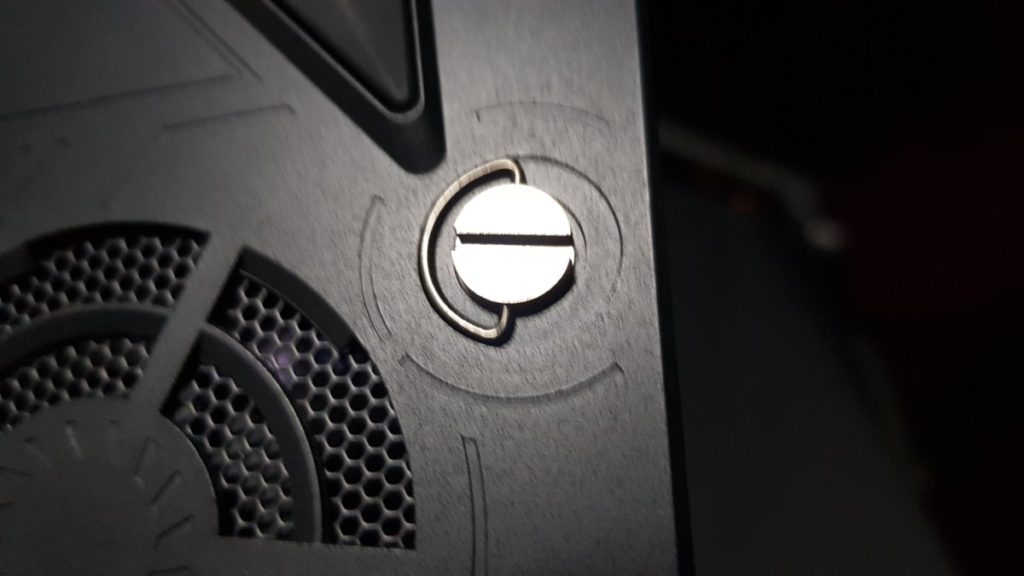 Accessing the gubbins of the Vortex G25 is an absolute doddle as well as the whole rear panel is secured with a quartet of twistable thumbscrews. Instead of having to resort to tools, each thumbscrew possesses a little flange that flips up to provide more leverage so you can just use your hands alone to access the chassis. The rest of the interior hardware is neatly distributed and a fairly adept (and careful) user can swap out the hard disks and SSD if needed. Handy, that.

Out of the box, the MSI Vortex G25 comes loaded for bear with a top-shelf array of hardware. Retail units will come with the latest Intel Core i7 8700 3.2GHz Coffee Lake processor. If needs must, the chip has a Turbo Boost mode that can speed it up in short bursts at up to 4.3GHz. Paired with the beefy processor is 16GB of DDR4 RAM on two DIMM slots with an additional two slots for upgrades for a total theoretical maximum of 64GB RAM.

The G25 is also VR ready with the capability to support up to three 4K@60Hz monitors via a pair of HDMI ports and the USB Type-C 3.1 Thunderbolt 3 port on account of its impressive NVIDIA GeForce GTX 1070 graphics card which has 8GB GDDR5. 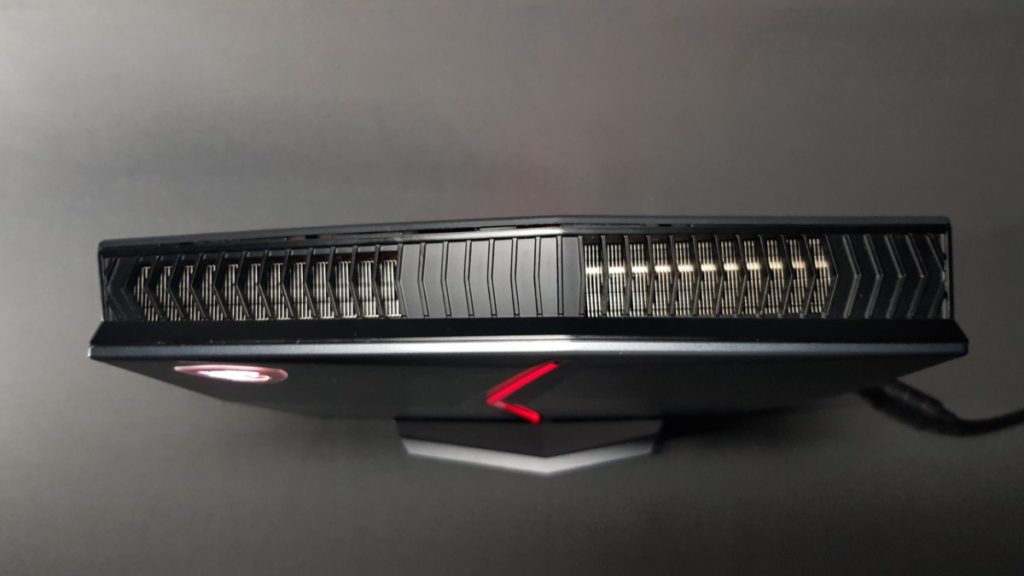 On paper, the GTX 10-series GPUs is rated to possess three times the performance of previous generation cards which is quite an achievement. The G25 runs Windows 10 Home with storage needs sorted out by a 256GB dual NVMe M.2 SSD by PCie Gen-3 for swift boot-ups paired with a 1TB SATA hard disk for storage needs.

Essentially, the new Coffee Lake processors runs slightly slower at stock speeds with the advantage of having higher Turbo Boost speeds for single threaded applications like games and the like, which will benefit heavy users and more demanding apps. 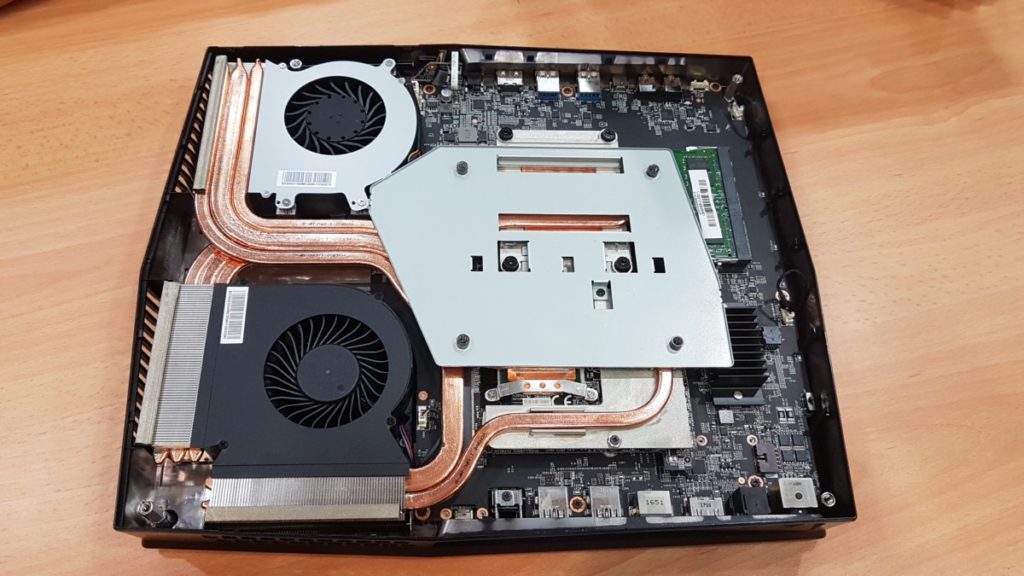 The MSI Vortex G25 has an impressive cooling array with 8 heat pipes and two cooling fans to keep things cool.

What elevates the G25 above the rank and file is the inclusion of MSI’s impressive cooling array that they’ve dubbed as Cooler Boost Titan. The array consists of eight dedicated cooling pipes from the CPU and GPU that help to shunt waste heat to the custom-machined Whirlwind Blade fans on the underside as well as through the three exhaust ports. If needed, you can even manually increase its cooling power via their built-in Dragon Center user interface.

Pre-installed on all their notebooks and rigs, the Dragon Center app lets users, depending on the features available, control the lighting, manipulate the aforementioned cooling and even  overclock the CPU, all within one handy user interface without having to tinker with settings in BIOS or whatnot. 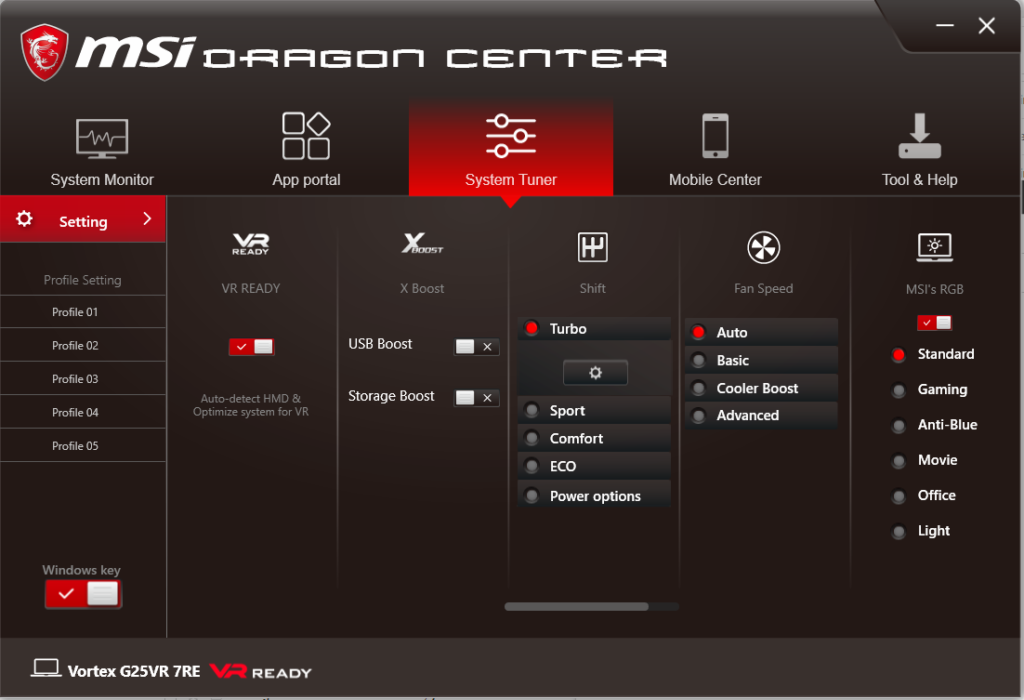 In the case of our test unit, it differed slightly in that it came with an Intel Core i7 7700K processor (retail units will come with the new 8th gen Intel Core i8 8700) and 32GB DDR4 RAM (retail units will ship with 16GB DDR4 RAM). In synthetic benchmarks, our test unit of the Vortex G25 yielded impressive results. In PCMark 10 Extended, it yielded a score of 6,534 points. In GeekBench, it yielded a single-core score of 5,549 and a multi-core score of 18,497. 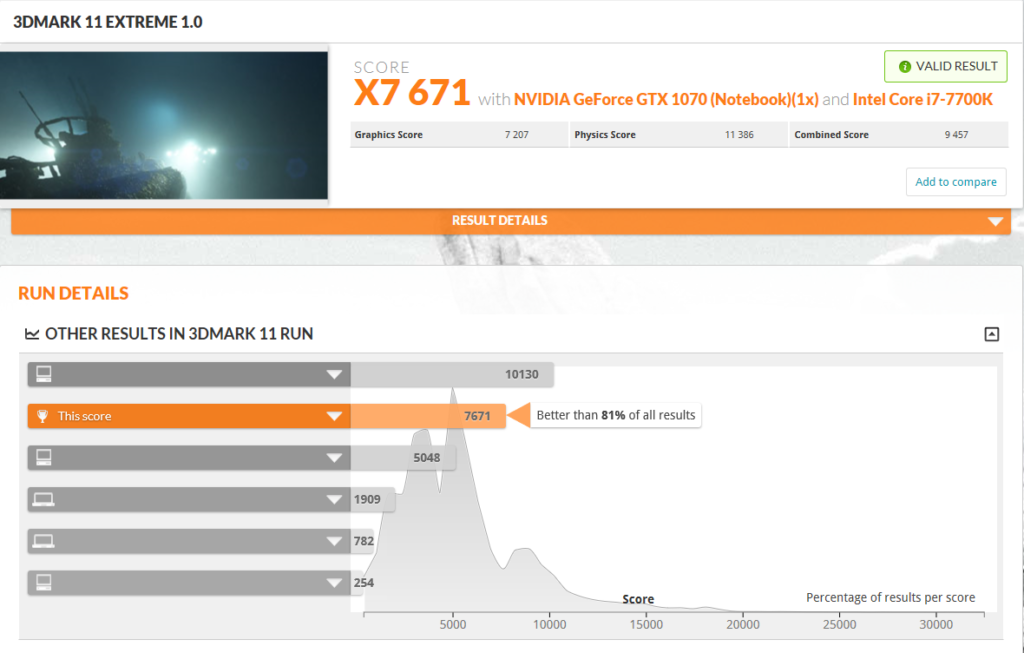 In 3DMark 11 Advanced Edition under Extreme settings, it snagged a very respectable score of 7,671 points which is better than 81% of posted results on the benchmarking platform. In 3DMark’s Fire Strike Ultra 1.1 test, it got a score of 3,732. 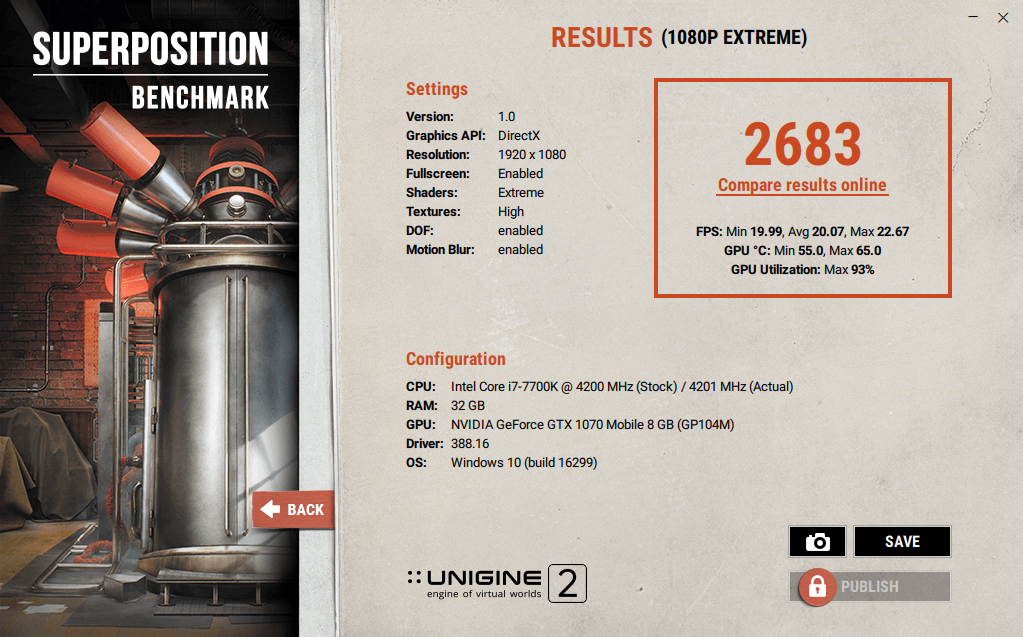 In Unigine’s SuperPosition benchmark under 1080P Extreme settings, the G25 scored a decent score of 2,683 with the GPU maxing out at 65 °C. When put through the SuperPosition VR Ready benchmark, it scored 5332 points on VR Optimum settings, putting it a decent ways north of being capable of running VR content. 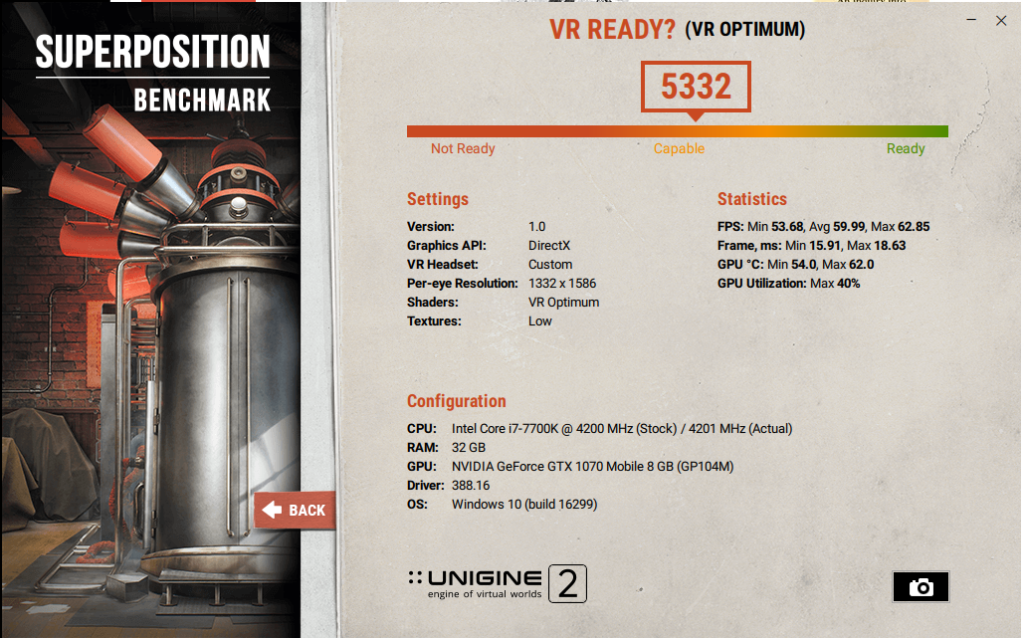 Under practical field tests, our test unit of the G25 with its Intel i7 7700K processor performed like a champ. It booted up in seconds and ran through a host of high-end games like a hot knife through butter. Deus Ex: Mankind Divided ran on high settings in a silky smooth fashion while Counterstrike: Global Offensive ran through a host of matches with nary a hiccup and at a delightfully smooth clip.

Even after a full day worth of gaming, the G25’s Cooler Boost Titan tech kept external temperatures just slightly north of mildly warm and even when under heavy gaming, noise levels from the cooling system were kept at below a murmur at 40dB; just about what you’d hear in the background of a library. 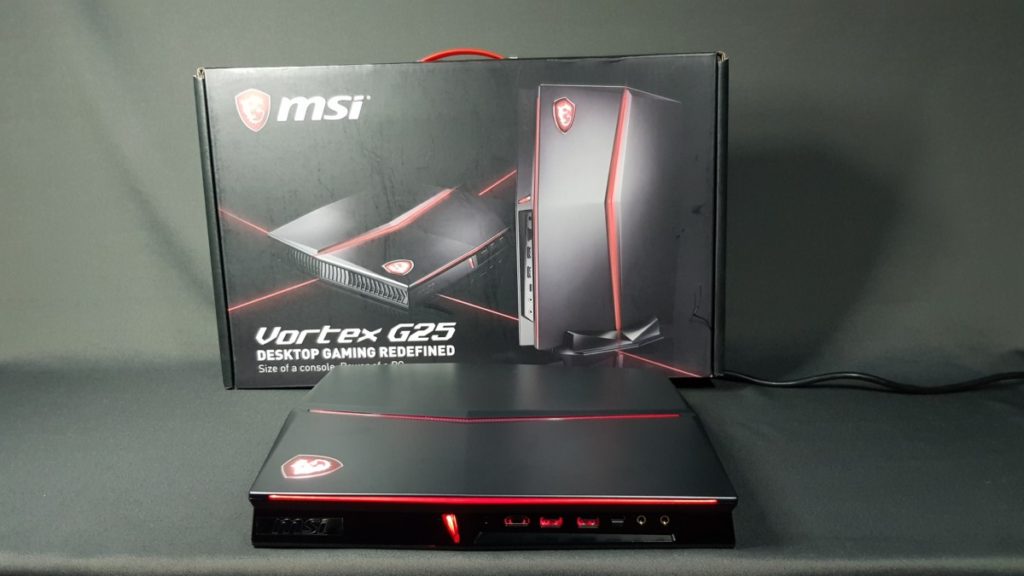 Of particular note with the Vortex G25 is that it supports Hi-Res audio and incorporates Nahimic 2+ tech that offers virtual 7.1 surround sound, allowing for a modicum of directional audio to give you an edge in certain games by giving you an idea where noise (and in all likelihood incoming fire) is coming from.

All this is of course contingent on wearing a decent pair of cans of course. Running a selection of lossless tunes delivered superb results and BioShock Infinite’s layered and robust audio soundstages were rendered in their full glory on a pair of Klipsch cans.

As it stands, our unit of the Vortex G25 proved to be an immensely capable gaming rig that performed with flying colours. Granted, it’s not apples to oranges seeing that the test rig had double the RAM of a retail version but the inclusion of the new Coffee Lake processor and its easy upgradability ensures that performance will likely match and in likelihood even top what we tested.

All told, the MSI Vortex G25 is an impressive affair. You’re getting a powerful gaming rig in a slim chassis that offers exceptional cooling for hours of high-end, gaming. Added to this is a superbly thought out chassis that optimises portability and accessibility with a host of easy to access ports for VR headgear and other kit. The removable backplate is a nice touch that ought to be the standard for desktop gaming rigs.

All this costs a fair amount of dough of course and you’re paying upwards of ten grand for the retail version of the Vortex G25 that comes with an Intel 8th gen 8700 processor. You do get what you pay for though and your money gets you one of the most powerful, slimmest gaming rigs that money can buy.

The MSI Vortex G25 8RE is available for purchase at the MSI Concept store behind Low Yat plaza and also online at Lazada in the following link: http://www.lazada.com.my/msi-notebook-official-store/?q=g25&sc=KVf-&scs=1

What we liked Light and slim chassis, excellent performance, variety of mounting options
What we didn’t Chassis lighting not customisable, not cheap
We Say The slim MSI Vortex G25 is the ultimate gaming rig for your next LAN party with an exquisite blend of portability and performance