In recent years, MSI have made quite a name for themselves when it comes to gaming notebooks and their most recent offering, the GT62VR aims to add to that illustrious lineage. The notebook comes with a refreshed array of hardware over its predecessor the GT62VR 6RE that includes a new 7th generation Intel Core i7 processor and an NVIDIA GTX 10 series graphics card along with a 15.6-inch 1080p NVIDIA G-Sync display. 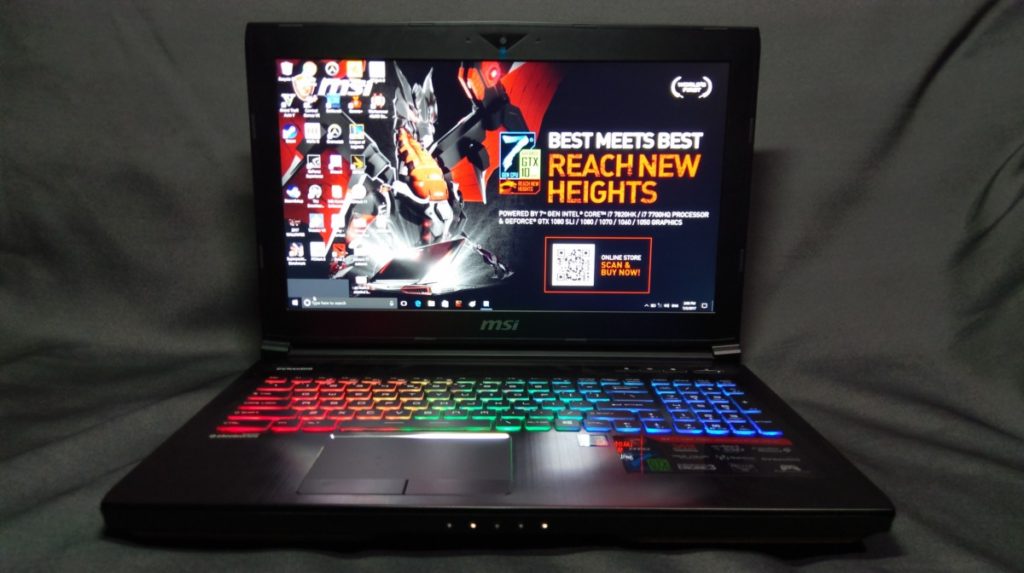 Externally, the notebook bears all the traditional hallmarks of MSI’s usual approach to notebook design. The top lid is made of brushed black aluminium save for an aesthetic set of grooves flanking the MSI logo emblazoned in the centre. The finish fortunately repels fingerprints and it looks rather fetching at a glance with a chunky, intimidating silhouette accented by red trim in strategic spots around the chassis. 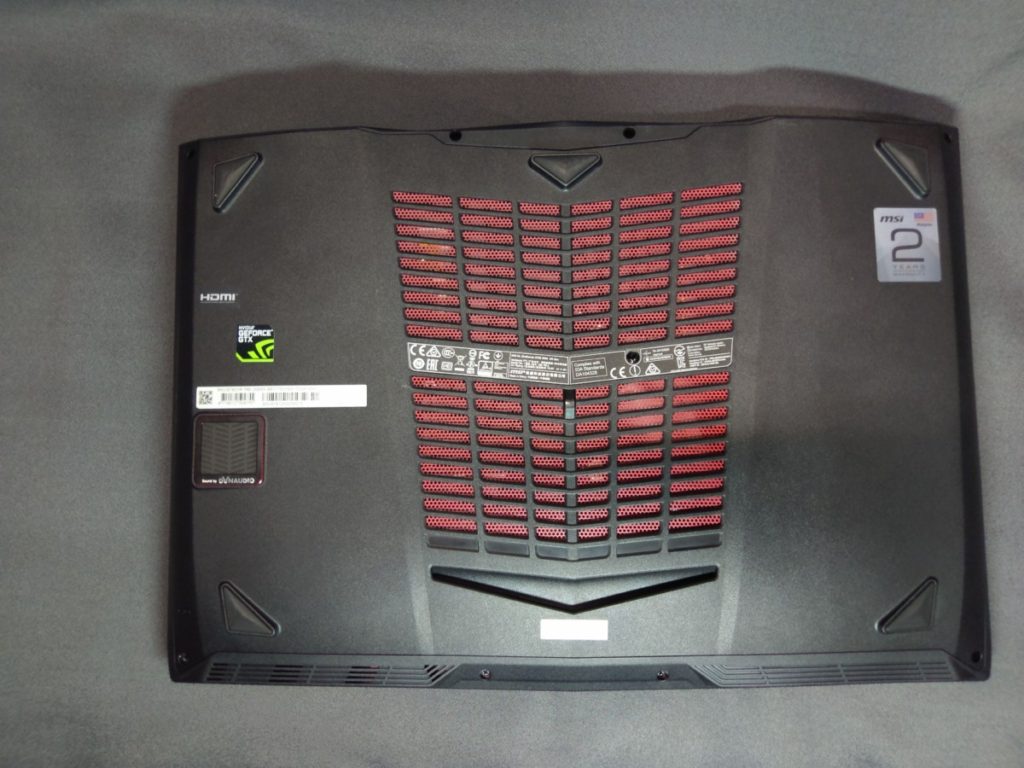 The sides, rear and bottom of the notebook are made from a matte black plastic. The base itself sports a stylised set of heat venting grilles trimmed in red and a set of rubberised feet in each corner of the notebook to prevent it from slipping when in use. The edges are sturdily built though the centre area where the venting grilles are located flex somewhat if prodded though it’s not set in a structural load bearing area of the notebook. 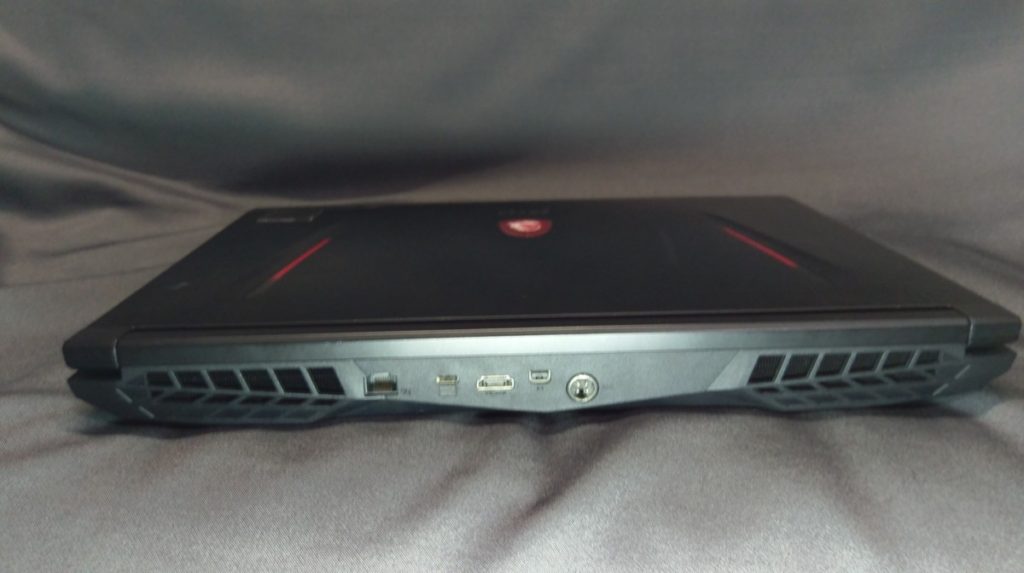 Whereas many notebooks tend to cluster their ports on the left or right, the GT62VR judiciously spreads them around the sides and rear with the most commonly used ones placed on the sides and the least used ones on the back. 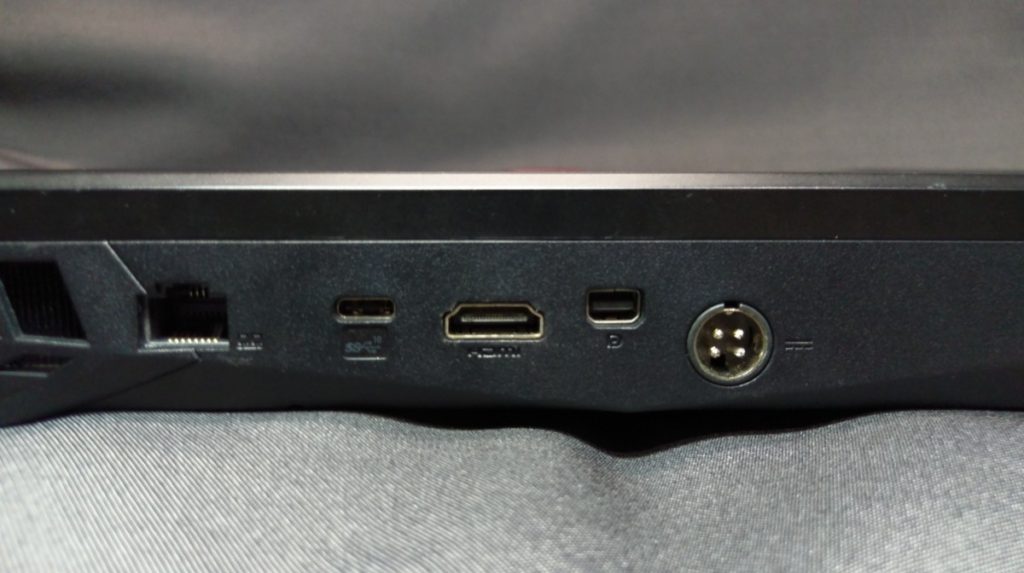 The rear of the notebook has an Ethernet port, a HDMI port, a mini display port, a USB 3.1 Type-C port and the obligatory power jack to keep it juiced. In keeping with many of its ilk, the power brick is a hefty, chunky affair that is grudgingly man-portable but weighs almost as much as three or four cans of soda. The right side sports a card reader along with a trio of USB 3.0 ports while the left comes a jacks for your headphones, a mike, an audio line-in, a line-out along with a single USB 2.0 port and a security lock attachment. Ergonomically, this works out splendidly seeing as the USB ports, audio jack and card reader will likely see the most use on the notebook. 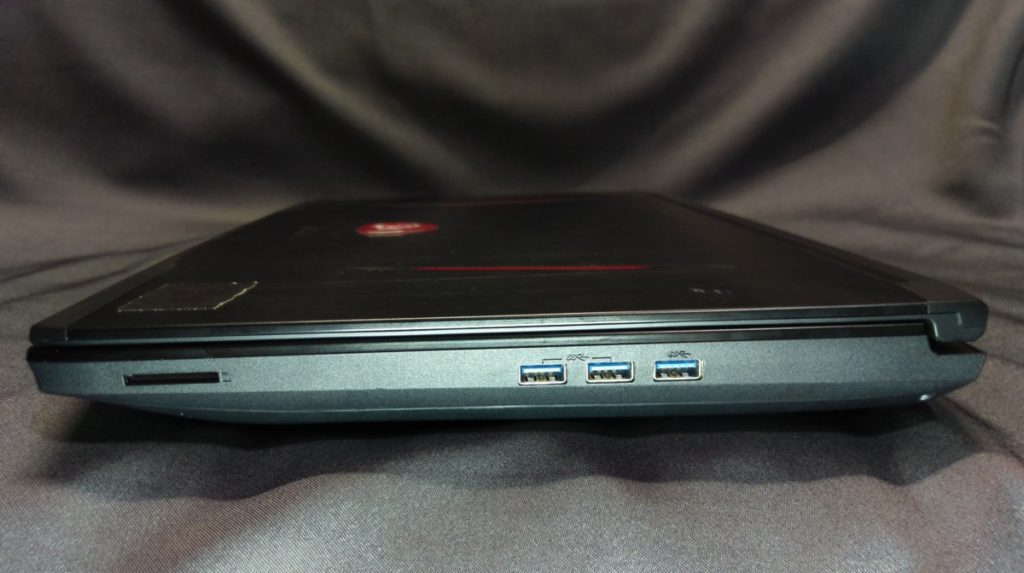 The hinges are well built and smooth, allowing for easy one-handed deployment of the display with a maximum deployment angle of about 130-degrees or so though it’s unlikely you’ll need to do so under most usage scenarios. 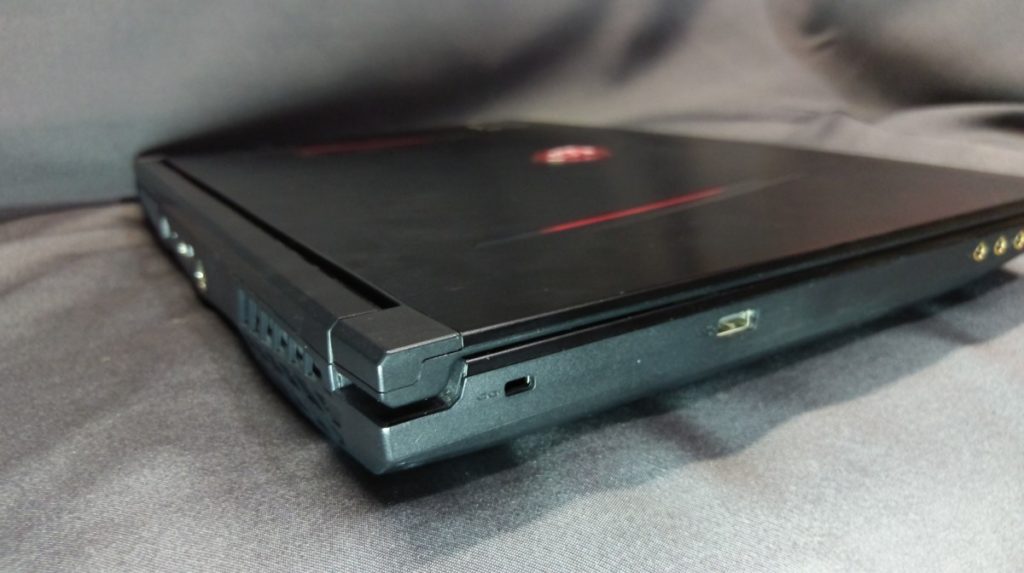 Flipping the lid open revealed a full sized chromatic backlit SteelSeries keyboard with a numeric keypad along with brushed aluminium palm rests. The mousepad itself has chrome trimmed accents, separate left and right mouse buttons and is placed slightly left from centre. Of note, in keeping with MSI’s other gaming oriented notebooks is the repositioning of the Windows key to the right of the space bar to avoid inadvertent accidents from happening when gaming. 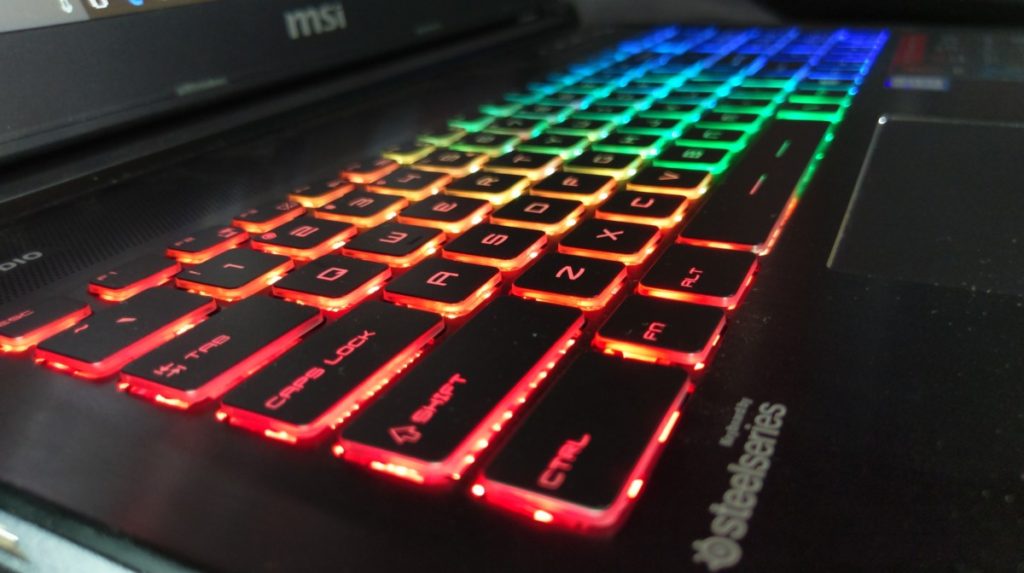 Overall, the GT62VR is an otherwise fetching looking notebook with reasonably solid build quality and well built hinges. The main quibble here is its somewhat hefty weight that is close to three kilos along with its somewhat chunky build that requires you to tote around a sufficiently large and reinforced backpack if you aim to take this around town.

Performance
In terms of hardware, the MSI GT62VR is an impressive statement in overkill wrought to life. It runs Windows 10 Home on a 7th generation Intel Core i7 7700HQ processor based on the Kaby Lake architecture, 16GB of DDR4 RAM, an NVIDIA GTX10 series GTX1070 graphics card that offers desktop-grade performance, a 256GB SSD and a 1TB hard disk. The only incongruous aspect of the whole affair is that it mounts a 15.6-inch Full HD matte display, albeit with NVIDIA G-Sync support. Pundits may raise eyebrows as to the inclusion of a 1080P panel on a rig equipped with a potent GTX1070 card but the clincher is that the notebook is able to simultaneously support up to two displays at the same time via the HDMI port and Mini Display port at up 4K resolution; assuming you have two extra monitors to spare that is. 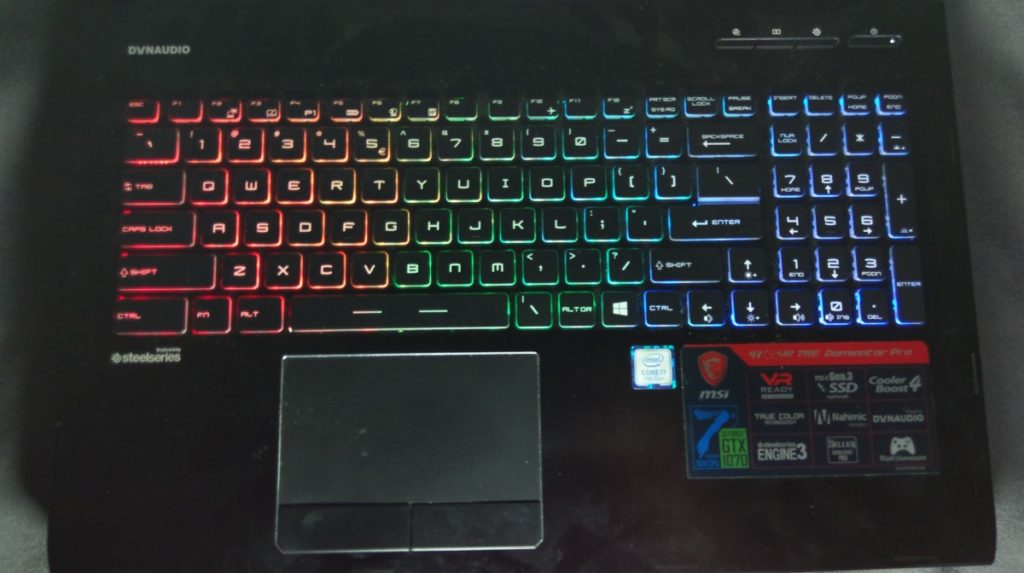 Under practical field conditions when playing a host of single and multiplayer games, the MST GT62VR Dominator Pro fit its moniker as it tackled everything thrown at it. The notebook’s G-Sync tech syncs the display panel’s frame rate with the GTX1070 graphics card for smoother animation and instant rendering onscreen. Games like Witcher III and Bioshock: Infinite were handled at Full HD on ultra settings in a silky smooth fashion with nary a hint of slowdown and everything rendered in luscious hues on the matte panel. The matte finish also endears it to gamers who tend to game under daylight as there’s significantly less glare. 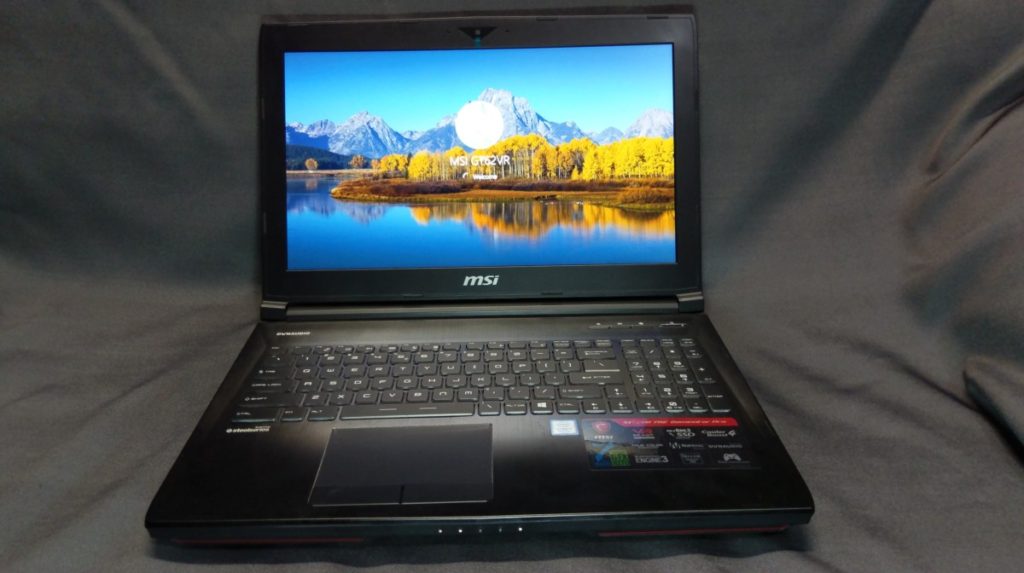 While the notebook performed well on the visual front, it faltered somewhat when it came to audio quality. The notebook’s speakers didn’t prove to be particularly loud. Even when cranked to maximum it delivered just enough volume to be heard from a modest half a dozen paces away though music and gaming audio were free of distortion or tearing even when cranked up to maximum. There wasn’t much of a sound stage either ; If you’re relying on it for directional audio like that needed in certain FPS games like CS:GO you’d probably do better by hooking up a pair of headphones. Detail was acceptable with enough bass to lend games a bit of extra aural oomph with meaty thwacks in melee and beefy reports when firing guns though there are notebooks with better audio hardware available.

In terms of crunching paperwork, the notebook did not disappoint. Spreadsheets and word processing and even the likes of rendering Full HD video were predictably handled without a hitch. The rig is also VR ready as well, as indicated by the VR suffix in its designation though we were not able to test that aspect of its functionality when we were going to print.

The keyboard is of note with a roomy layout, generous palm rests and excellent responsiveness which made for an extremely pleasant typing experience. The chroma backlighting is broadly divided into three zones that you can customise or turn off entirely with the option to tweak each of the three broad zones into any of close to 16 million colours. It offers quite a bit of make-work for casual gamers but professional gamers would likely derive significant benefits from this with a little elbow grease.

The main quibble here is the somewhat unresponsive touchpad. It’s perfectly fine for desktop work but if you’re planning to get anything done in a speedy fashion, you’ll likely need to get a mouse.
.
Battery Life, Price and Conclusion
In keeping with many gaming notebooks, the battery life on the GT62VR Dominator Pro is unfortunately a point of contention. Using it for regular productivity tasks like answering emails and light web browsing will eke you three or so hours and if you happen to run it at full tilt for gaming, you’d expect an hour and a half or so. This lack of endurance relegates it to being a desktop replacement that can’t wander far from the mains. Still, the fact remains that this is a VR-ready solution that has oodles of power under the hood along with the ability to support two other UHD monitors at the same time. The fact that it is still sufficiently man-portable without requiring a luggage bag is still an impressive feat. 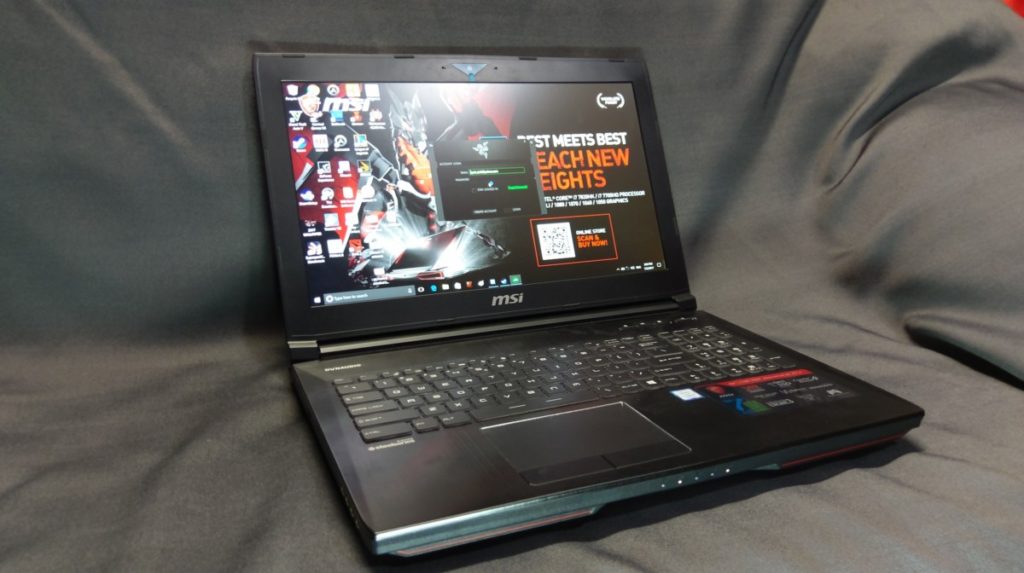 The combination of a spiffy Kaby Lake processor, Pascal graphics and an otherwise solid array of hardware make this an immensely powerful desktop replacement that can run any game on the market and have enough pixel crunching punch to tackle demanding work scenarios like video rendering and more. The fact that it comes with a good keyboard may see this as a possible option for users seeking a semi-portable high-end work solution. Bar the middling speakers and poor battery life, both of which can be circumvented, the GT62VR Dominator Pro is a gamer’s delight though it doesn’t come cheap. If this floats your boat, you can acquire this online at MSI Malaysia’s official online store at mystore.msi.com