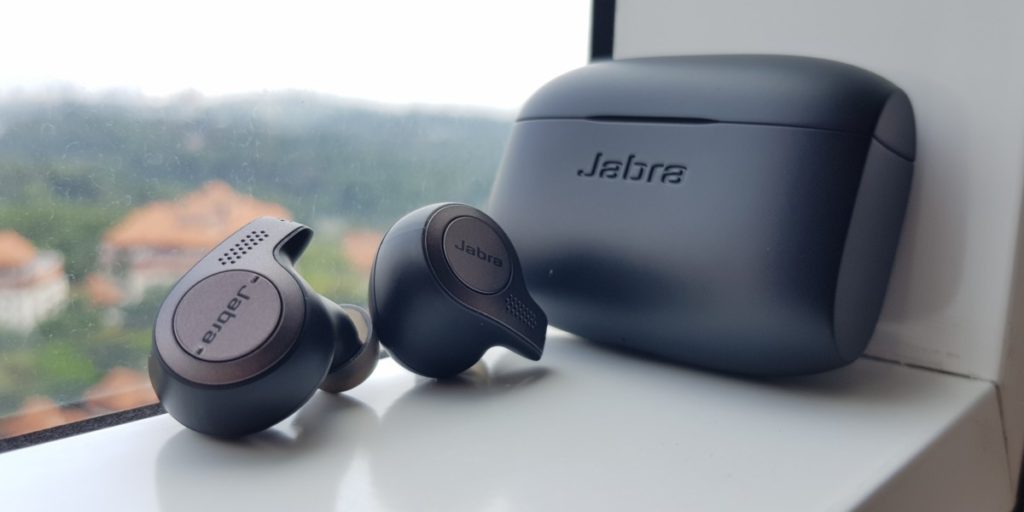 One of Jabra’s best wireless earbuds ever made with great audio quality, excellent portability and battery life as well as a modicum of comfort to make it an essential addition to any urbanite or traveller’s kit.

Jabra has been making enterprise-oriented headsets and headphones for years and they’ve made a solid name for themselves as one of the best in their field with a distinctive edge in noise cancelling tech that can allow for whisper-silent conversations to take place even in the most raucous room or office. Their new wireless Jabra Elite 65t earbuds are the beneficiary of their years of expertise in enterprise tech and are designed to offer superior audio performance and call quality in an exceptionally compact form factor. 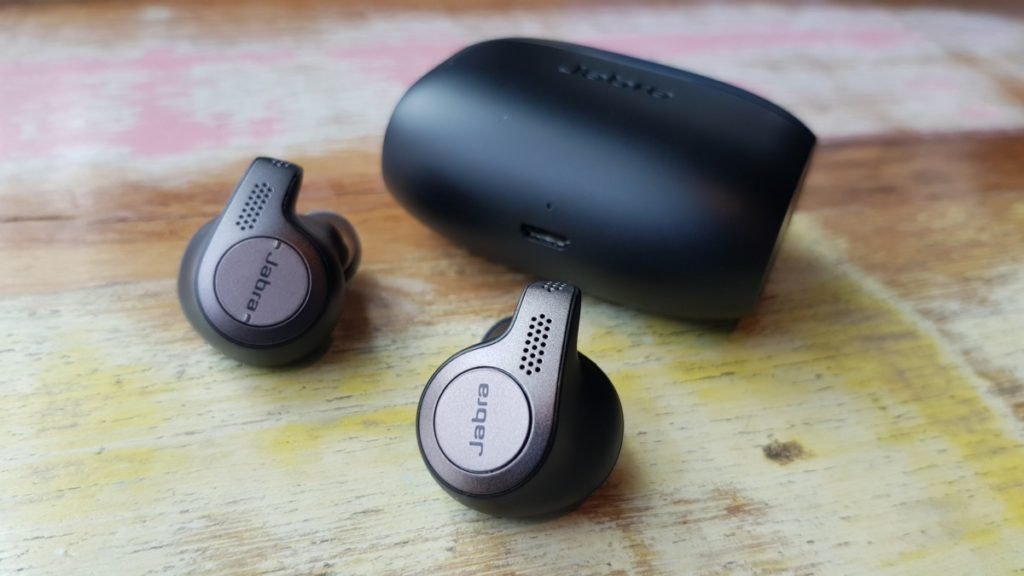 In terms of packaging, the Jabra Elite 65t comes in a sturdy cardboard box that comes in their signature yellow and grey packaging. Sliding the case open reveals a beautifully designed interior case hewn of plastic and cardboard with the earbuds safely ensconced within a form-fitted plastic tray along with the charging case. Just beneath it in a cardboard box is a micro USB charging cable, a quick start manual along with two additional pairs of earbuds so as to offer a better fit if the default earbuds don’t fit well.

Rather than opting for a design that looks like a pair of toothbrushes sticking out of your ear like what Cupertino’s Airpods resemble, the Elite 65t strikes a more businesslike chic about its design with a restrained, yet stylish look about it that won’t look out of place in the boardroom. Most of the earpiece nestles comfortably in your ear except for an unobtrusive looking external housing on each earbud with each one also hosting a set of controls. The left one manipulates volume, depending on which edge of the button you hold down while the other lets you make and take calls as well as summon a virtual assistant with Alexa, Siri and Google Assistant available at your beck and call. 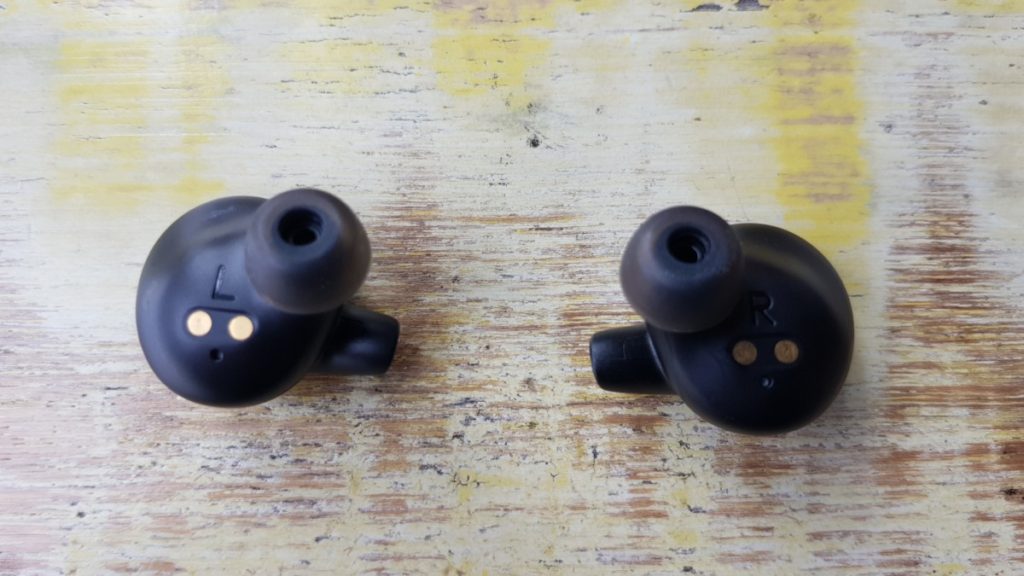 So far so good but where Jabra’s audio expertise comes in is that the earbuds contain a quartet of mikes, allowing for excellent call quality even if you’re stuck in a noisy or windy area with the ability to either let you block out or allow ambient noise to seep into your ears. The earbuds are also rated IP55 for splash and dust resistance which means they ought to survive a minor sousing in the rain.

The charging case itself is a matte black lozenge shaped box with the dimensions of a curved, chunky matchbox. One particular quibble is that the lid of the case is rather hard to open, perhaps intentionally so and requires two hands to pop it open. Popping the lid open reveals two form-fitted interior cutouts for storing the Elite 65t earbuds while the base of the charging case has a micro USB port for charging. You can’t juice the earbuds directly; you’ll need to put them inside the case for them to receive a charge. 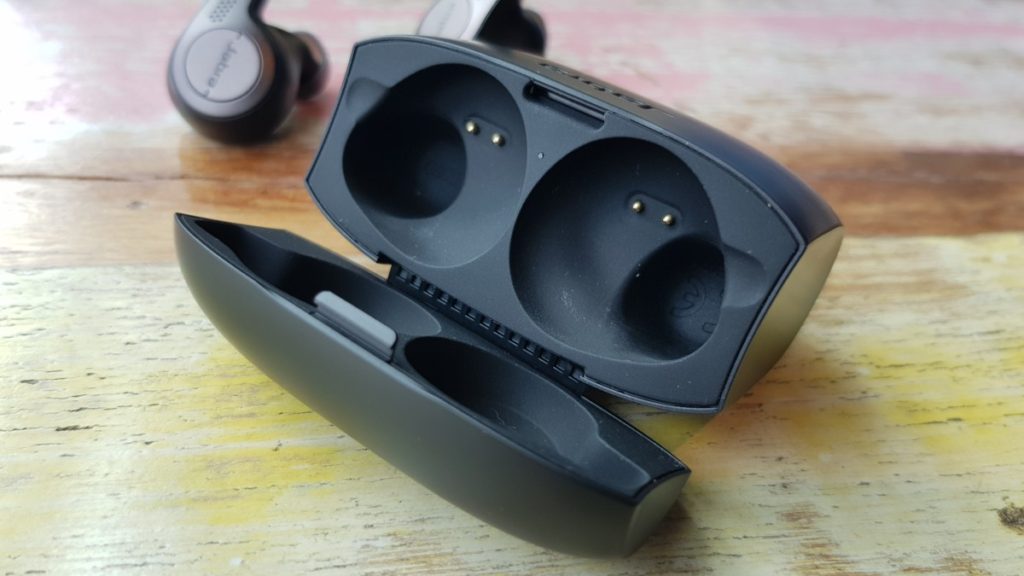 Each Elite 65t earbud nestles comfortably on the inside in a form fitted cavity for charging and storage. There’s no chance of getting it wrong as each cut-out section specifically fits the left and right ear bud. By default, each earbud has about five hours of battery life though the case itself has enough for two additional charges per earbud for a grand total of 15 hours of use in the field before running dry. That ought to allow for enough natter and music listening time to run through a substantial part of anyone’s playlist.

Unpacking the Jabra 65t from its well appointed package and getting it up and running was a relatively problem free task. After a rudimentary test fit, we swapped out the existing earbuds for a slightly smaller pair in the box and then popped it into the charging case to juice it to a full bar’s worth of power. Once that was sorted out, we paired it to a Galaxy Note8 which was loaded with a variety of both MP3, Wav and Flac files. The earbuds paired itself up in seconds and were up and running in no time. 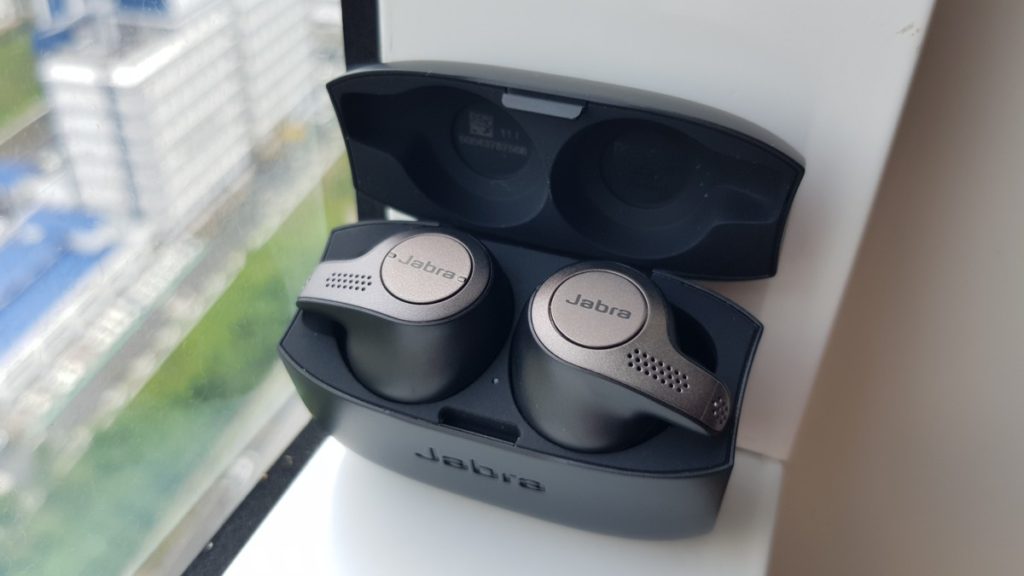 One interesting trick to note and which is also indicated in the user manual is that they ought to be inserted into your ears with the pointy notch facing the six o’clock before being twisted up into approximately the four o’clock position. Doing so ensures a tighter audio seal which in turn leads to significantly better audio quality, which was proven during field testing. In either case, the Elite 65t’s were securely lodged in our ear canal and didn’t so much as move an inch even with heavy movement whether it was a lively jaunt down Bukit Bintang walk or a dead run to chase for the last bus on the commute. 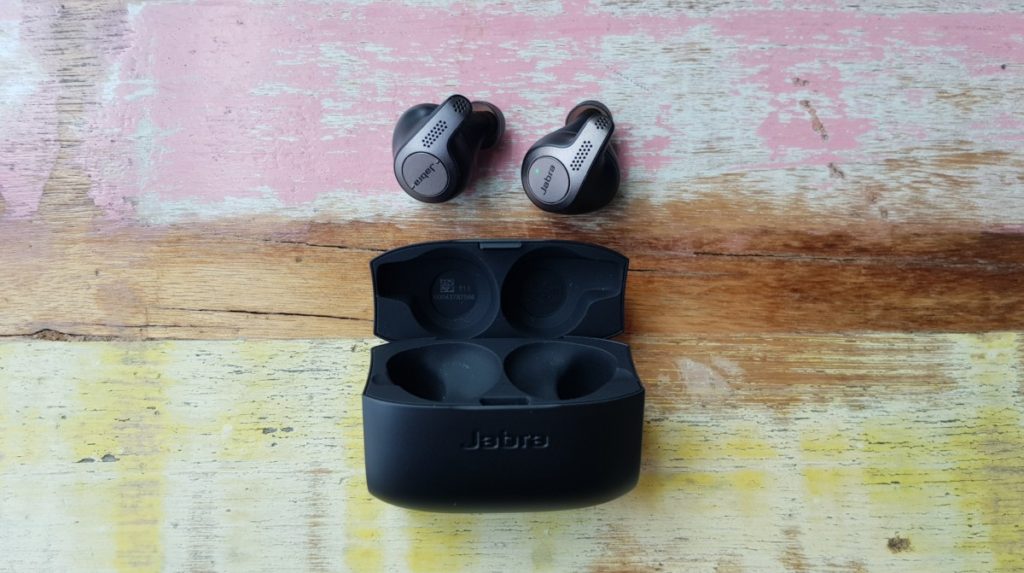 Of note is that the earbuds proved to be relatively comfortable even after hours of wear, allowing for extended usage which will come in handy on long haul flights. Taking calls was a doddle with excellent call quality on both sides when tested in the middle of a busy shopping mall during lunch hour and also downtown in the middle of a drizzle with a modest wind ripping through the neighbourhood. Befitting Jabra’s sterling reputation, recipients on the other end noted excellent call clarity and a lack of all the usual distracting ambient noise prevalent in outdoor calls.

You can also summon a virtual assistant though this is more of icing on the cake than a cornerstone feature of the Elite 65t. Rather than being constantly on listening to your voice, you’ll have to tap a button on the earbud before speaking a command phrase, which is an onerous task if your hands are otherwise engaged in doing something else and which makes it far less convenient to do so on a whim. 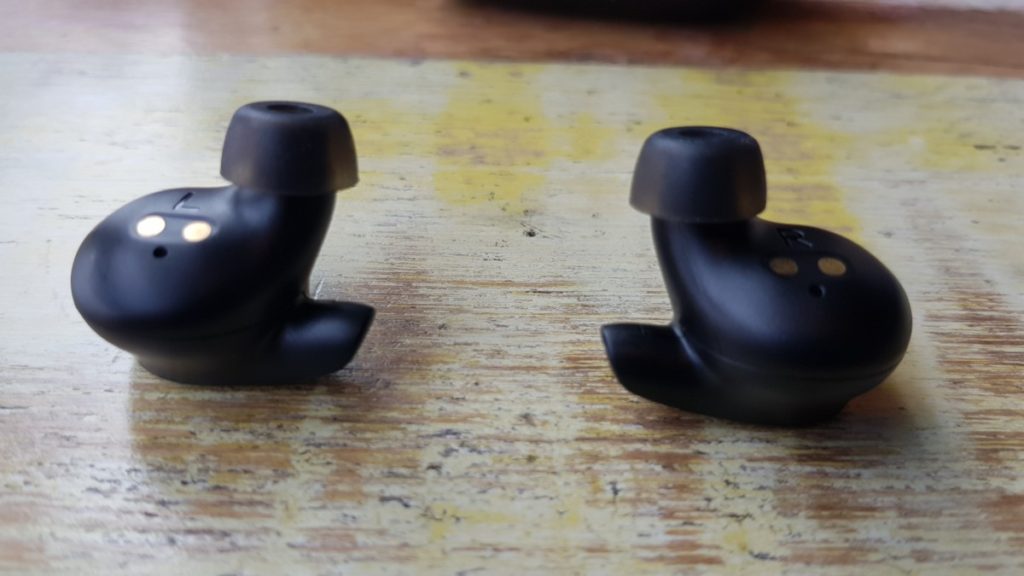 Seeing as Alexa support isn’t widespread in Malaysia, you’ll have to default to either Siri or Google Assistant both of which worked in a fairly competent if unremarkable fashion when summoned via the Elite 65t. That’s only half the equation though as the Jabra Elite 65t isn’t only for making and taking calls – it’s actually a pleasantly competent pair of wireless buds too though it only reaches its full potential when paired with the Sound+ app.

Jabra, in keeping with a great many other vendors, has also created a Jabra Sound+ app that’s downloadable for free on the Google Play Store and iOS app store that maximises the potential of the Jabra Elite 65t as it lets you truly customise it to your own personal definition of sound.

The extensive menus allow you to enable or disable the earbuds “Hear Through” function, play any of a dozen forms of ambient background noise and, more importantly, tweak the equaliser settings to your exact specifications. For easier access, the app also has shortcuts, denoted by bold icons that offer presets intended for use in public transport and also for when you’re working and need to concentrate.

Exploring the app takes awhile but pays dividends especially in terms of customising the performance of the Jabra Elite 65t to your personal tastes. Jabra’s “Hear Through” function, which is activated by a software toggle that can be turned off so you can focus on the music which means you don’t hear outside noises with the earbuds forming a passive sound seal, or activated so you can listen to ambient external noise ; handy if you don’t want to get squished by oncoming traffic because you weren’t paying attention. 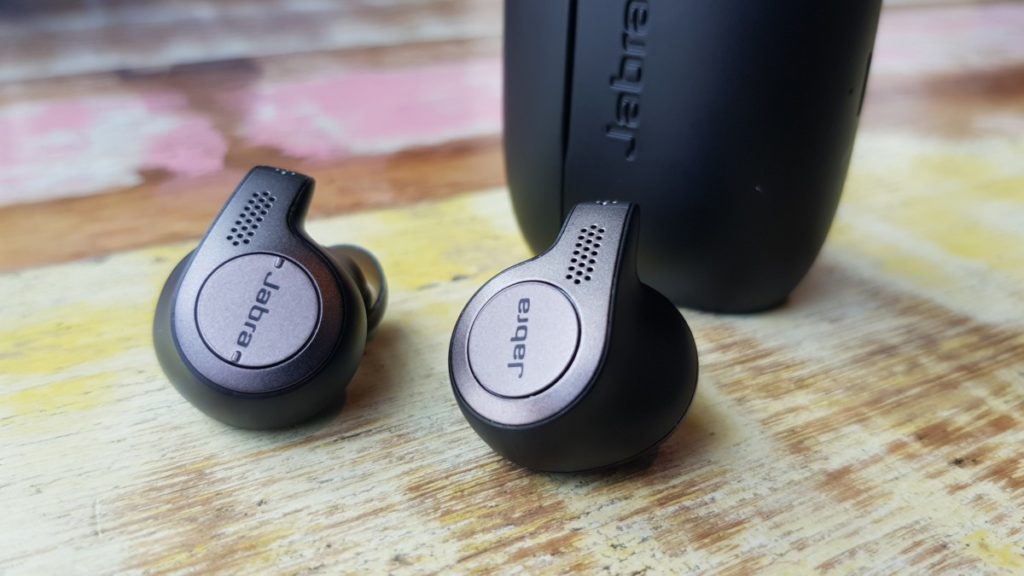 Of particular note is the solid connectivity with nary a single dropout during our test period which spanned several weeks of continuous use. Audio quality for consuming content was solid across the board. Gaming and streamed videos from YouTube were handled with good clarity and a fair soundstage.

In terms of tackling music, the Jabra Elite 65t did a decent job straight out of the box but proved sublime with a few tweaks via the Sound+ app and it handled a variety of genres in a solid fashion ranging from the usual contemporary pop music to subtler tracks without losing significant amounts of detail. Combined with its ability to passthrough external ambient noise, it proves to be a solid workhorse indeed.

When subjected to a couple of hours of use a day, it had sufficient endurance to last all the way up to its advertised 15 hours of battery life with top-ups in its charging case. As far as its price tag goes, the Jabra Elite 65t is about par with other wireless options in the market like Sony’s WF-1000X and Apple’s Earpods though it offers slightly longer endurance in the field at 15 hours and the solid call quality that Jabra is renowned for along with a modicum of comfort. If you need a pair of unobtrusive, solid-performing wireless buds, this is an easy recommendation.

What we liked Exceptionally compact and portable, effortless and reliable pairing, great audio and voice quality, superb battery life
What we didn’t Charging casing is a bit hard to open one-handed, finicky controls
We say One of Jabra’s best wireless earbuds ever made with great audio quality, excellent portability and battery life as well as a modicum of comfort to make it an essential addition to any urbanite or traveller’s kit.