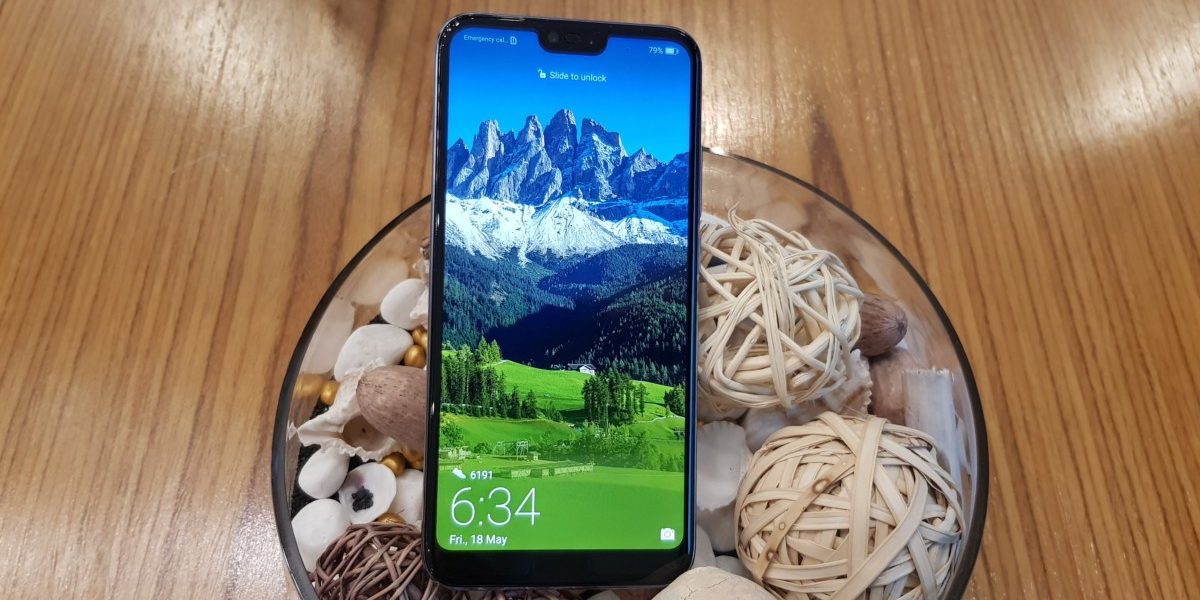 A fashionably accoutered smartphone with good AI-enhanced rear cameras and decent overall hardware combined with an impressively agreeable price tag, making it one of the best value camphones around.

The latest addition to honor’s lineup of phones in Malaysia, the honor 10 bears an aesthetic resemblance to Huawei’s P20 phone in its lustrous mirrored finish that comes in one of three different colours for the Malaysia market, one of them being a unique gradient finish called Phantom Blue. They even come with a similarly potent processor in the form of a Kirin 970 octacore from Huawei’s own foundries though where they primarily differ is in terms of price. The honor 10 at launch retails for a staggeringly affordable RM1,699 whereas the higher end P20 retails for RM2,599. 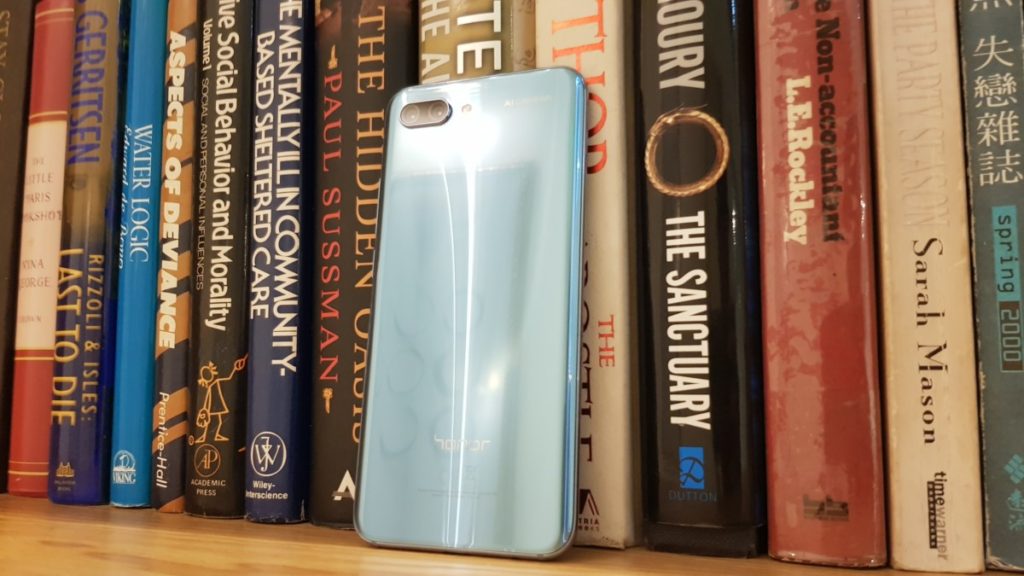 Build quality for the Honor 10 is otherwise excellent with a good, event heft about it, elegantly rounded corners and subtle antenna bands on the top and bottom of the phone. The tall, narrow 19:9 aspect ratio screen lends itself well to one handed use and they’ve even been kind enough to apply a screen protector onto the phone straight from the factory. Of particular interest is their ultrasonic fingerprint reader that’s been plonked under the glass and denoted by a faint silvered outline though you can also opt for the phone’s face recognition tech to unlock the phone. Both options are immensely capable and nippy to boot for unlocking the phone.

The base of the honor 10 sports a USB type-C port, a 3.5mm audio jack and grilles for themono speaker while the right sports a volume rocker and power button. The left has a dual SIM card slot. Unfortunately the phone lacks a microSD card slot for expandable memory though the existing 128GB of onboard storage ought to last you quite awhile. 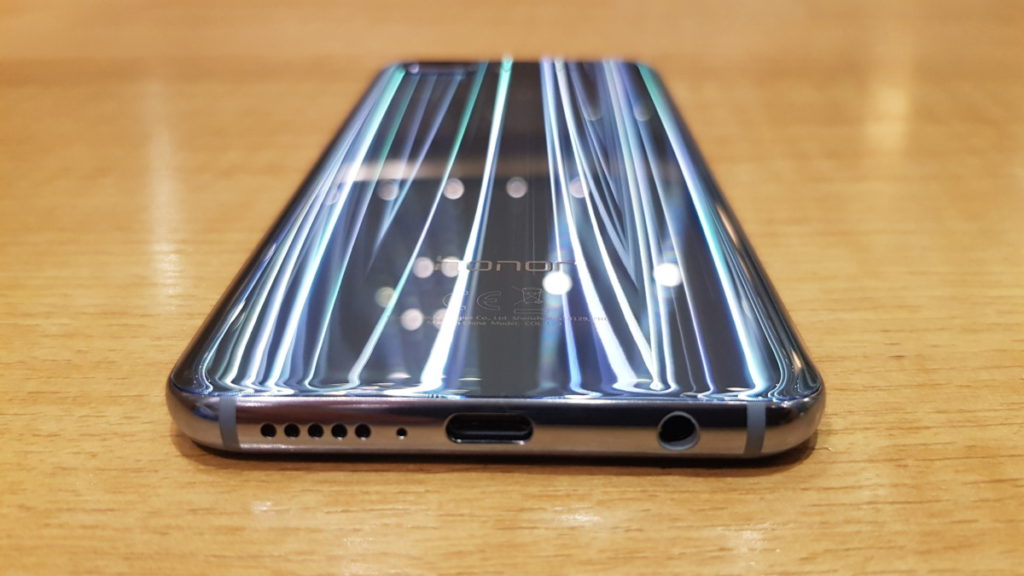 The finish is visually striking, with a 15-layered glass laminate that was first pioneered on the older Honor 8. Whereas the P20 has a more distinct colour gradient effect, the Honor 10’s multi-laminated finish on the backplate creates both the colour gradient effect and somewhat unpredictable reflections when held up under sunlight.

It’s an interesting, visually pleasing look though this also renders the phone a fingerprint magnet with smudges aplenty. One other quibble is that the rear dual camera module that’s been raised several milimetres out of the casing, rendering it prone to scratches; a recessed design would have been a more preferred option. Fortunately, they’ve provided a clear plastic case for use with the phone that solves that problem handily. Alas, the phone lacks water resistance of any sort. It’s a missed opportunity here that would have elevated it to being one of the most desirable phones of 2018. 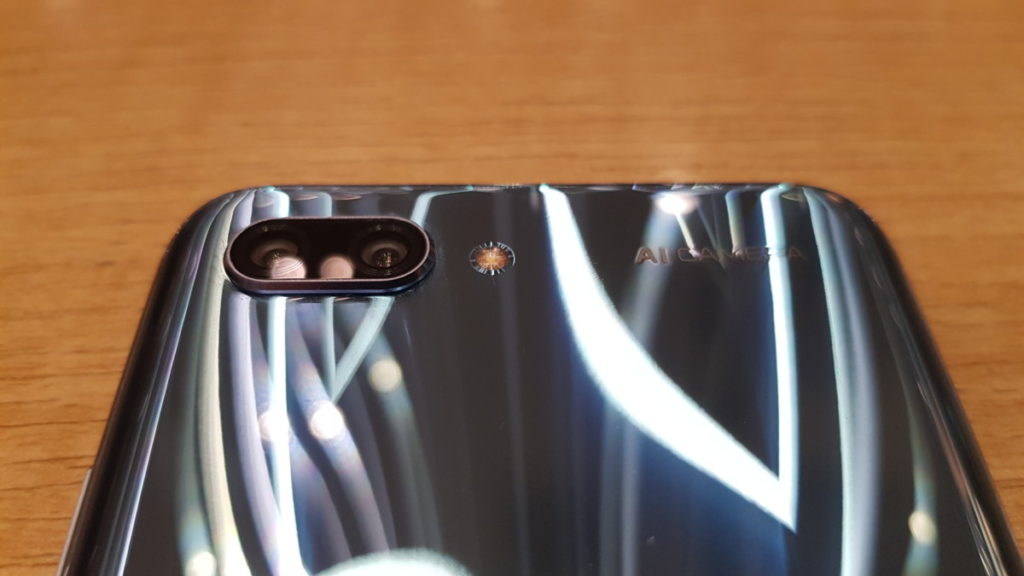 In terms of in-box goodies, the Honor 10 strikes a modest middle ground though seeing its asking price, there’s little to quibble about. It lacks a pair of headphones though it does have the aforementioned case, a pre-applied screen protector as well as the obligatory charging cable and plug to go with the phone.

For Malaysia, the honor 10 comes in only one configuration though several permutations exist globally with differing amounts of storage and RAM. What you get for your money is a 5.84-inch FHD+ resolution touchscreen up front with a 19:9 aspect ratio, 4GB RAM and 128GB of non-expandable storage with a Kirin 970 octacore processor running Android 8.1 Oreo. The 4GB of RAM means that it’s slightly more modestly specced than the Malaysia variant of the View 10 that has a similar Kirin 970 processor but 2GB more RAM and, more importantly, expandable memory too as the honor 10 lacks a microSD card slot. Fortunately, 128GB of integrated storage is still plenty and you’ll take awhile to max it out. 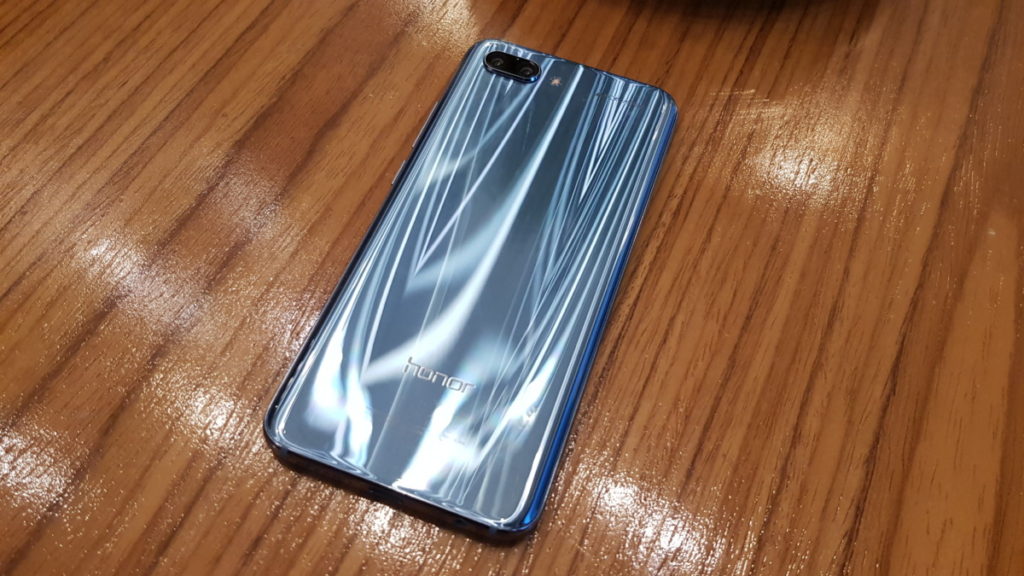 In terms of the display, it has a slightly wider aspect ratio at 19:9 versus the View 10’s 18:9 and the P20’s 18.7:9 aspect ratio which effectively makes it slightly more rectangular. The screen size, measured diagonally is comparable to the P20 though the View 10 edges it out slightly with a 6-inch display. It stands out over its older View 10 sibling on account of the notch, which allows for them to cram in a wider aspect ratio into the form factor. If you’re part of the ‘no notch’ camp, you can optionally disable it via user settings. The rest of the user interface is otherwise clean and inoffensive and veterans of prior honor phones will find getting about relatively simple with few unpleasant surprises lurking in wait.

Even under daylight conditions, the display did not disappoint with bright hues and crisp text as well as pin-sharp imagery onscreen. If needs must, you can optionally reduce the resolution to HD to eke out a bit more battery life and you’re even able to automate this feature too if your battery level runs below a certain percentage.

In synthetic benchmarks, the combination of the proven Kirin 970 octacore and 4GB RAM yielded a 3DMark Sling Shot Extreme Open GL ES 3.1 score of 2,910 and a Sling Shot Extreme Vulkan score of 3,145. In Geekbench, it garnered a single-core score of 1,883 and a multi-core score of 6,478. In PCMark, it got a score of 7004. In Antutu 3D, it got a score of 205,501. In terms of overall benchmarks, it compares favourably with the pricier P20 which is expected as both have similar amounts of RAM and an identical Kirin 970 processor.

On its own merits, the honor 10 did well in the field tackling everything asked of it. Getting about was swift with nary a hint of lag. Browser windows opened up in a jiffy and video streaming was handled in a capable fashion with most footage appearing in a letterbox format with the sides cropped which makes the notch somewhat of a non-issue. Gaming was handled in a capable fashion as well with the likes of Hitman Sniper and Player Unknown Battleground capable of being played at high settings with smooth framerates without it keeling over.

Perhaps the only quibble here is the unexceptional mono speaker that handles watching short video clips and gaming in a capable fashion with good volume but poor sound staging and a lack of detail. While it is perfectly serviceable, it feels like a missed opportunity to cram in a set of stereo speakers or better audio quality into the phone. Still, for what you pay for, all this are minor quibbles at best.

The honor 10 comes with a 16-MP camera with an f/1.8 aperture paired with a 24-MP mono camera in a horizontally mounted dual-camera module located in the upper left of the phone. The raised nature of the module means some care needs to be taken to avoid it getting scratched. The phone combines data from both cameras to produce better shots and this is further augmented via the Kirin 970’s separate Neural Processing Unit (NPU) that offers an AI mode which helps make colours richer, cleans shots up and intelligently selects from one of 22 different modes.

Not all the modes are practical or something that you’d encounter in day-to-day life; who actually needs a panda mode, really? Pro mode fortunately offers plenty of options for more savvy users who can eke out more dramatic shots though its default Auto mode augmented by AI is highly capable, which ought to please most casual users.

Shots with AI mode on are more hit than miss with pretty good shots overall that were crisp, with noticeably more vibrant hues, especially of shrubbery than normal. For casual users who aren’t too chuffed about colour accuracy, the phone handles shots for casual use with in a competent fashion. Low light shots are good for the most part with the AI helping to jazz up shots with brighter hues and a smidgen more detail though low light shots still have some amount of grain especially in very dimly lit conditions.

Of particular value to prolific selfie shooters is the fact that the camera has a 3D portrait lighting mode that lets you dynamically light up selfies and portraiture with one of a half score of unique lighting modes – stage lighting, split lighting, butterfly lighting, soft lighting and classic lighting.

Many of the 3D portrait lighting modes are visually striking and add real zing to your portraits though some modes miss the mark with inaccurate separation of hair from the background. Fortunately, you can still tweak the lighting post-shot. All said, the honor 10 is a very capable camphone under most shooting conditions that should please all but the most finicky users.

The honor 10 strikes a middle ground in terms of weight and performance with a modest non-removable 3,400mAh Li-Po battery crammed within its casing. With modest use consisting of an hour or so of gaming, streaming the odd hilarious video on Facebook and YouTube, all-day texting and the usual paperwork on Google Docs, emails and the like,  the phone was able to last the day with enough juice for the commute home. 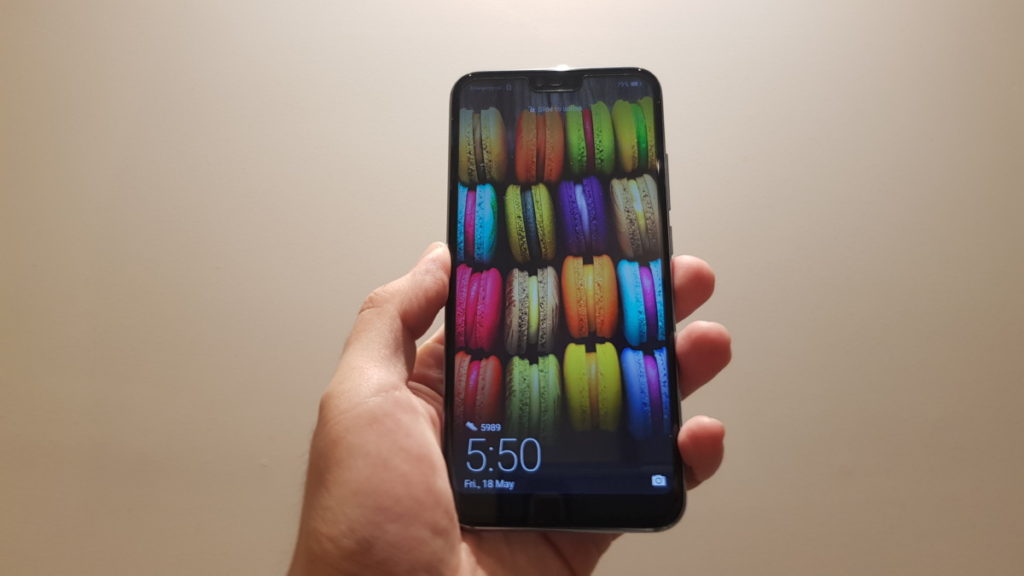 If you’re in need of more endurance, the phone has a plethora of battery saving modes that can stretch your battery endurance by several more hours if not days by cutting down background processes, animations and the like. If you’re really stuck in the sticks, the Ultra power saving mode offers a whopping quoted six days of standby time on just 44% battery life albeit with the tradeoff of having only a small pool of apps available for use.

If you’re looking for an affordable camphone that also looks fetching in the bargain, the honor 10 is a worthy, premium looking acquisition with a solid camera performance. If you own an honor phone  from a couple years back, this is a sound upgrade option. At its asking price of RM1,699 at this point in time, it’s one of the best value camphones that money can buy.

What we liked Beautiful mirrored finish, excellent rear camera, slick under-glass fingerprint reader, great hardware for price
What we didn’t No microSD card slot, not waterproof, finish is a fingerprint magnet
We say A fashionably accoutered smartphone with good AI-enhanced rear cameras and decent overall hardware combined with an impressively agreeable price tag, making it one of the best value camphones around.