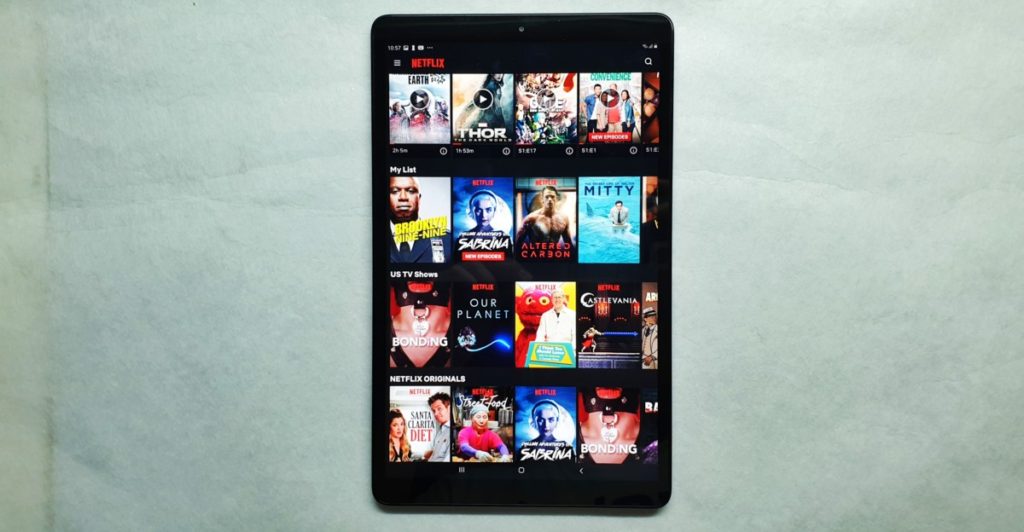 The Galaxy Tab A 10.1 2019 is an ideal slate for enjoying digital content with a large and luscious display as well as sufficient horsepower and battery life for enjoying movies and web browsing on the go.

The Samsung Galaxy Tab A 10.1 refresh for 2019 comes with a number of welcome refinements over its predecessors that optimise its role as a media consumption device versus that of the higher end Galaxy Tab S series that are intended primarily for productivity tasks.

Externally, the Galaxy Tab A 10.1 has a clean polished look about it with a chassis hewn of metal done up in a dark metallic gray. Primarily intended for use in landscape mode, the tablet emplaces its power button, volume rocker and hybrid SIM card slot on the right side of the display which ends up the top when you plonk it sideways. Unlike many tablets, the Tab A 10.1 does allow you to make calls or augment the existing storage with a microSD card up to 512GB in size. There is also a WiFi only variant that has mostly similar specifications and an identical display but lacks a SIM card tray and has 1GB less RAM. 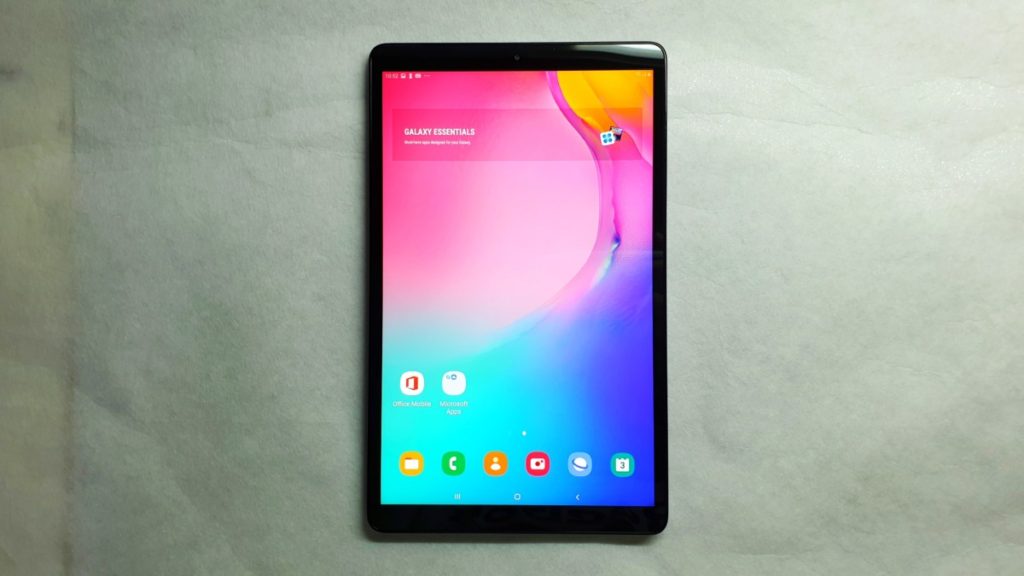 The left side of the tablet is bare while the top has a 3.5mm audio jack. The base of the tablet has room for a pair of speaker grilles for the tablet’s stereo speakers as well as a USB Type C port.

The rear is otherwise blank save for a swath of plastic up top which also houses an 8-MP camera.

Up front, the slate has a 10.1-inch WUXGA LCD display that has a 16:10 aspect ratio and modestly chunky bezels if compared to its compatriots. Perched up top is a 5-MP selfie camera. 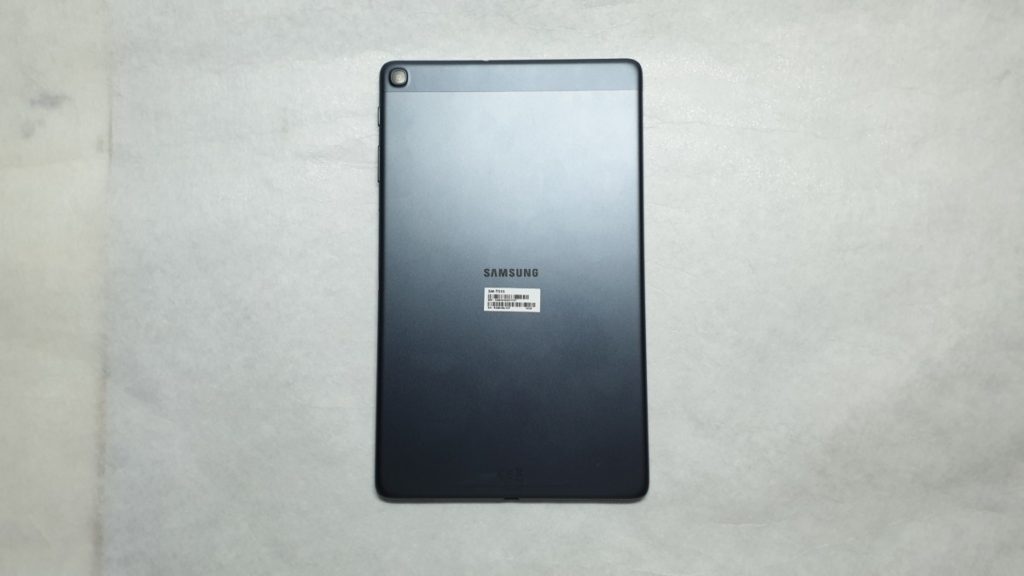 For what you pay for, the Galaxy Tab A 10.1 2019 has above par build quality with the sturdy metal chassis lending it a more premium heft and feel while the matte finish also helps to repel fingerprints to some degree though the modestly chunky bezels framing the display detract from what is otherwise a very good looking slate.

The Galaxy Tab A 10.1 2019 is powered by an Exynos 7904 octacore processor that combines a 1.6GHz hexacore and a 1.8GHz dualcore processor. This is paired up with 3GB RAM and 32GB of storage. Other variants with more or less RAM and storage exist globally but Malaysia gets two versions with nigh identical specs save for the fact that the Wi-Fi only variant has 1GB less RAM and lacks a SIM card tray but is cheaper at RM899 and the LTE-enabled variant which was what our test unit was costing a bit more at RM1,299 but with 1GB more RAM and a SIM card tray to stream content away from WiFi. 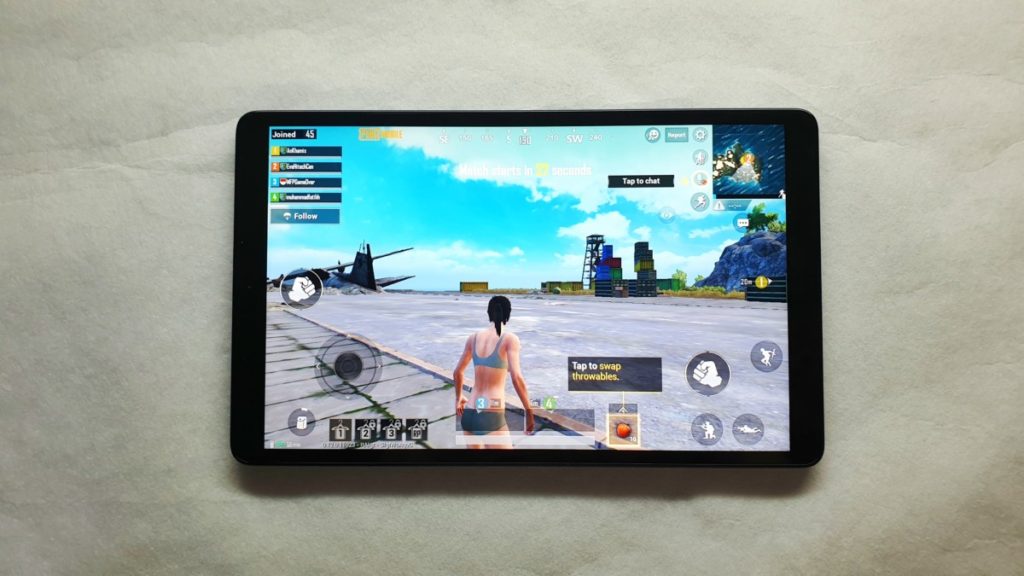 Of particular note is that the Galaxy Tab A 10.1 2019 runs the latest Android Pie 9.0 with their One UI user interface and it also supports Widevine L1 DRM, which means that it lets you experience Netflix content.

For content consumption, the tablet proves to be a pleasant experience with the display serving up bright and crisp visuals and acceptable contrast for an LCD panel though a Super AMOLED display would have been most welcome but at RM1.3K, there isn’t much to quibble over for a slate of this size. It still offers fair clarity under sunlight and for otherwise general browsing, movies and YouTube, the tabletdoes a good job with Netflix content displaying in all its glory from end to end with nary a bit of letterboxing. 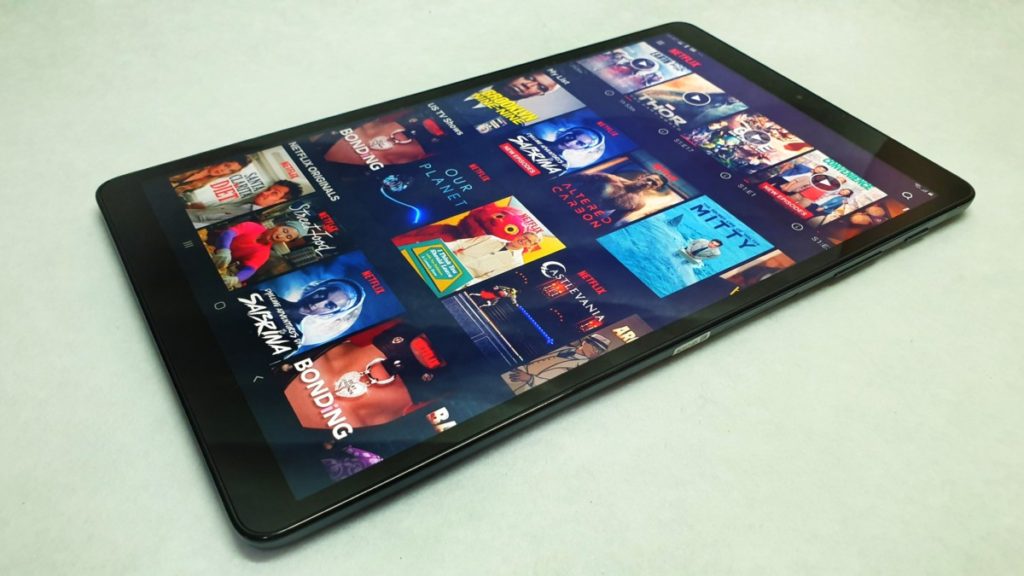 Unfortunately, the Dolby Atmos tuned stereo speakers on the tablet are mounted at the base of the tablet; if unobstructed by your hands when held in landscape mode it does a fair job but sound staging is middling at best and the speakers aren’t particularly loud but the provision of a 3.5mm audio jack means you can opt for headphones when the need presents itself. 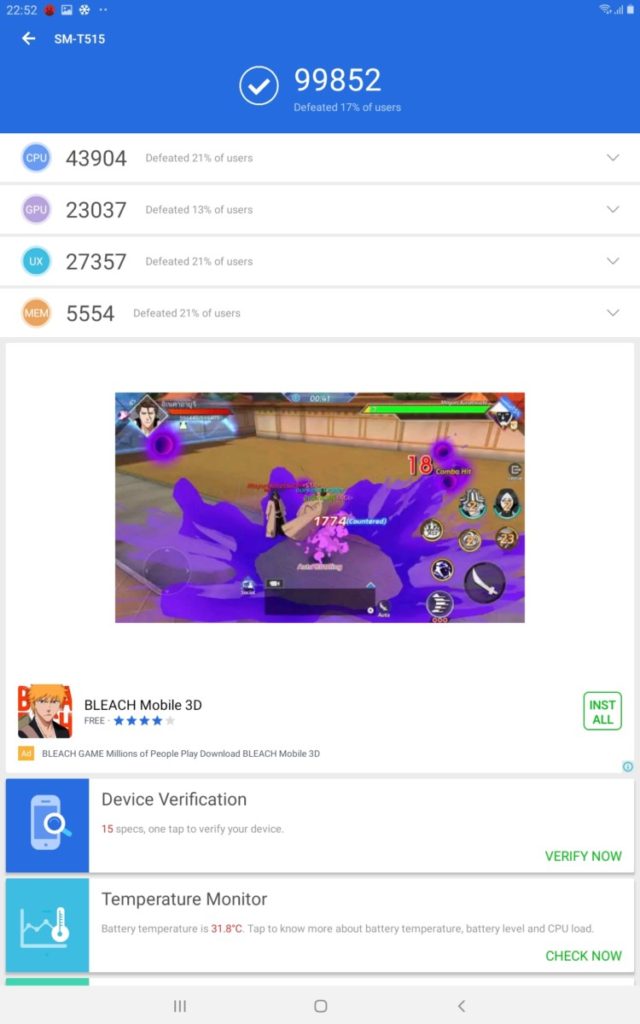 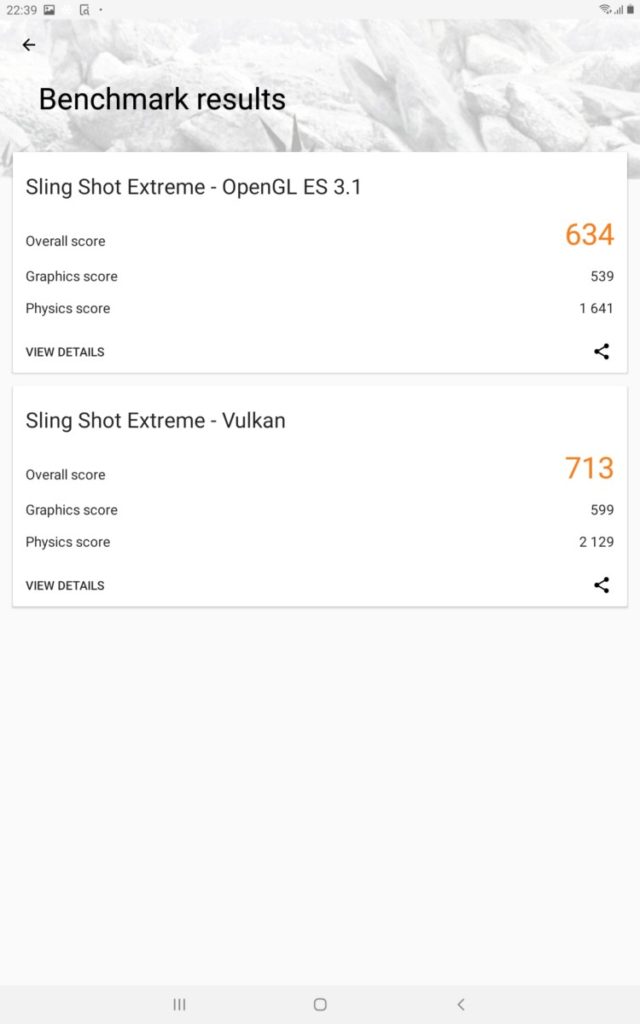 For gaming, the LTE variant of the Galaxy Tab A 10.1 2019 proved serviceable and was able to handle PUBG at medium graphic settings out of the box and a number of other games including Asphalt 8 without undue complication though it wasn’t able to handle Fortnite at all. The slate also proved to be sufficiently large enough for use to read e-magazines and books; making it handy for long trips. 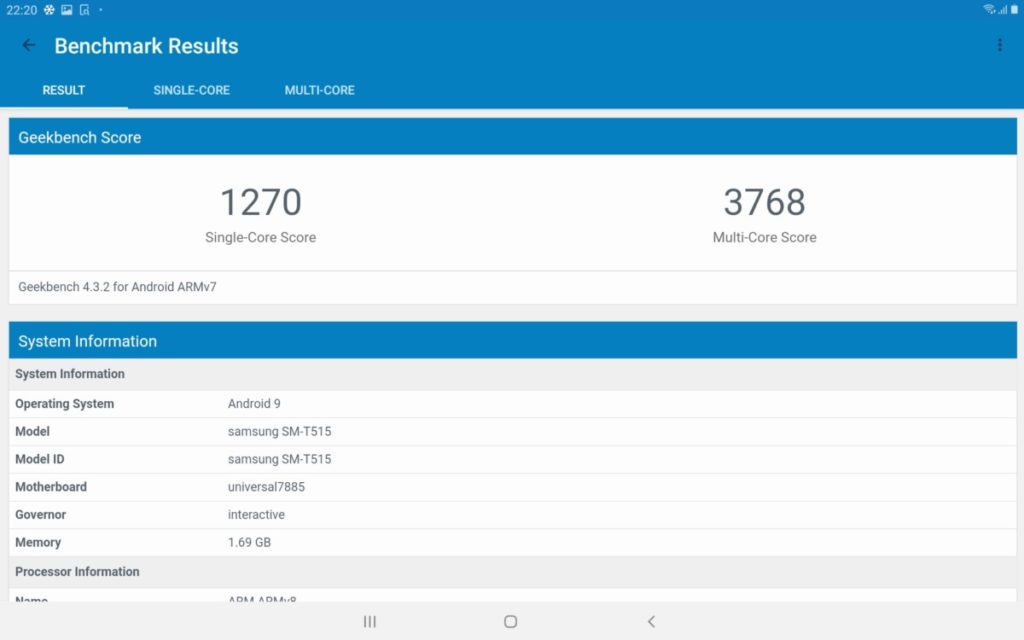 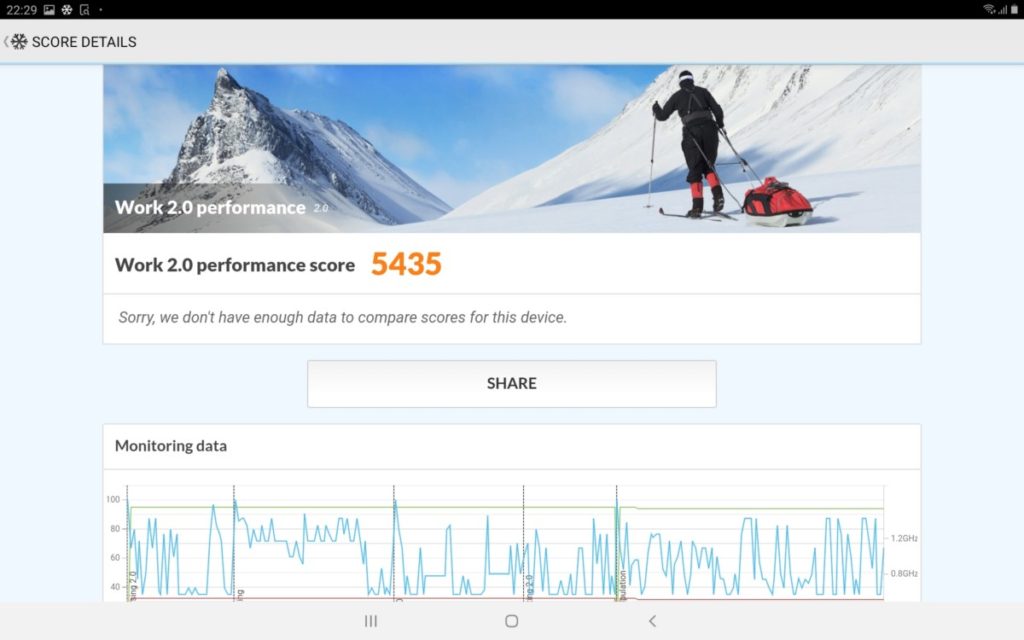 It’s also a fair hand for paperwork with browser windows opening in a snappy fashion and Gmail as well as Microsoft Office worked smoothly though it lacks DeX mode which its sibling the Galaxy Tab S5e possesses though you still can get some work done with a wireless keyboard and some patience. 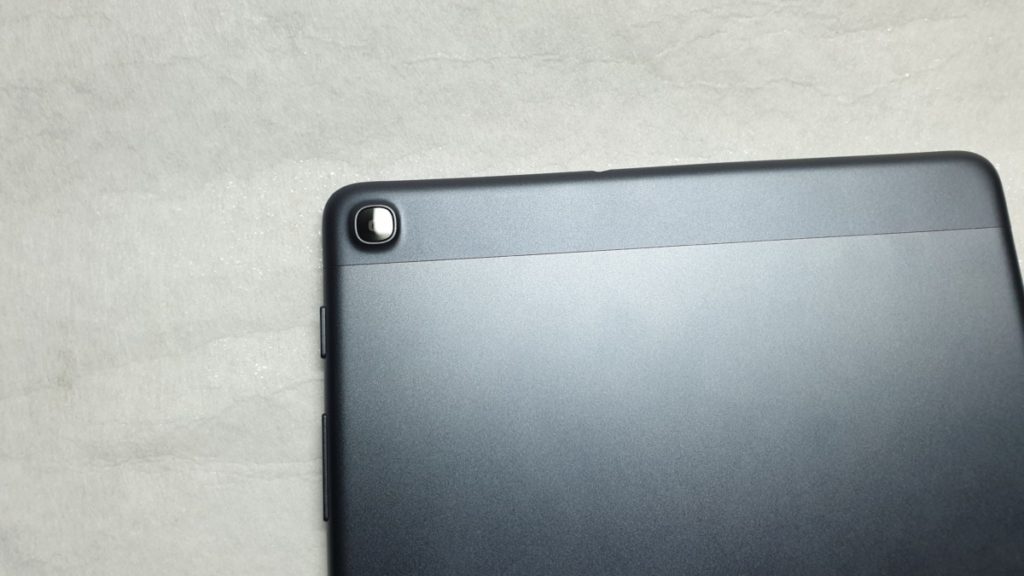 On the camera front, the Galaxy Tab A 10.1 has a modest setup with a rear facing 8-MP with autofocus but no LED flash unit and a camera interface somewhat akin to the Galaxy A-series phones with a very basic pro mode that only lets you tweak ISO, white balance and exposure. Where it works in its favour is that it also culls some features from their high end Galaxy S series with their Scene Optimiser mode that optimises contrast and colours for better shots.

In terms of image quality, the rear camera proves to be surprisingly decent with good image quality in daylight on auto mode with Scene Optimiser on though the unwieldy nature of holding a tablet to take photos means you won’t be using the cameras very often. The front comes with a 5-MP selfie camera that can use the display as an ersatz flash. Bar the odd video call or two and a few selfies with rather soft image quality, you also likely won’t be using it much. 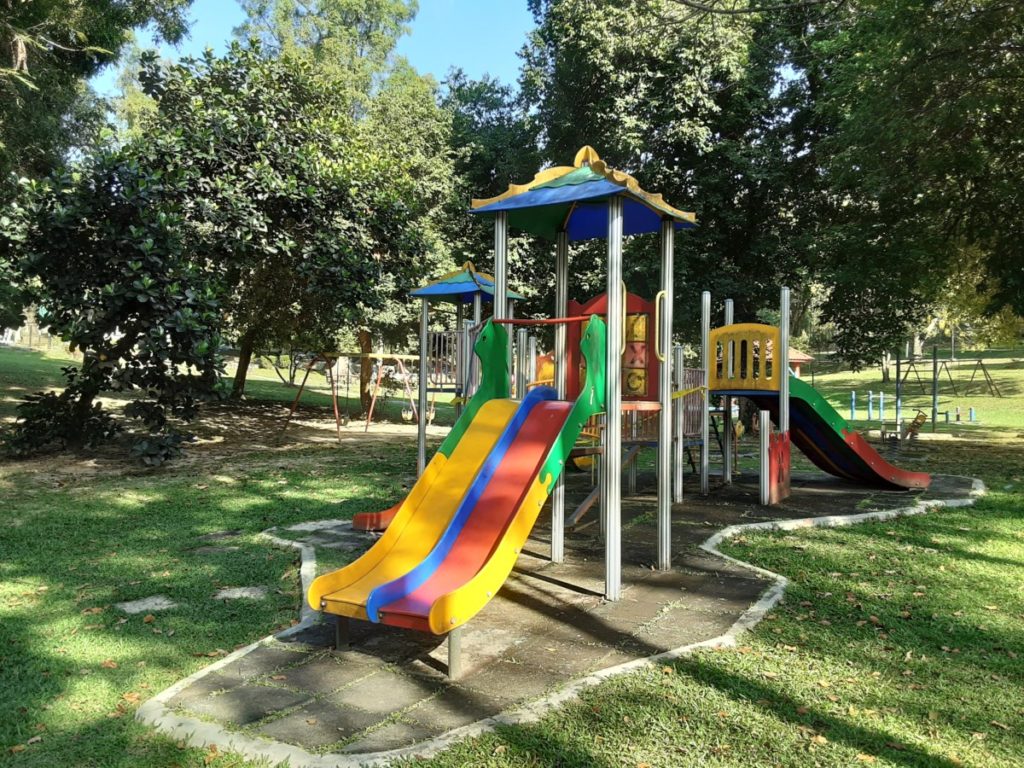 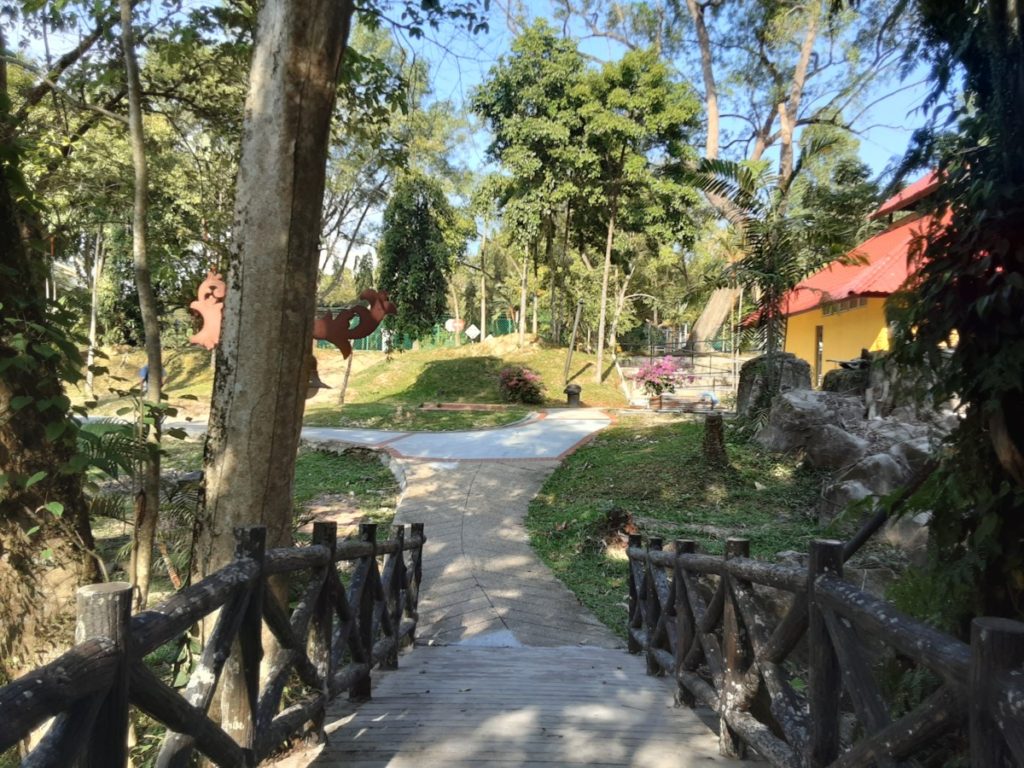 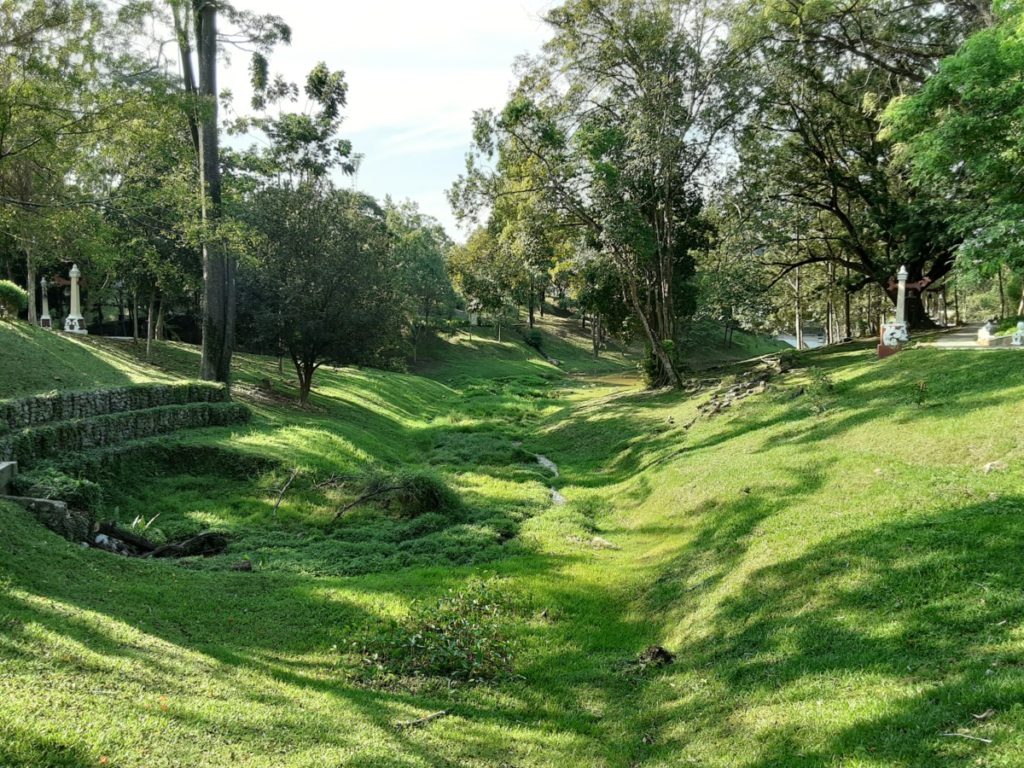 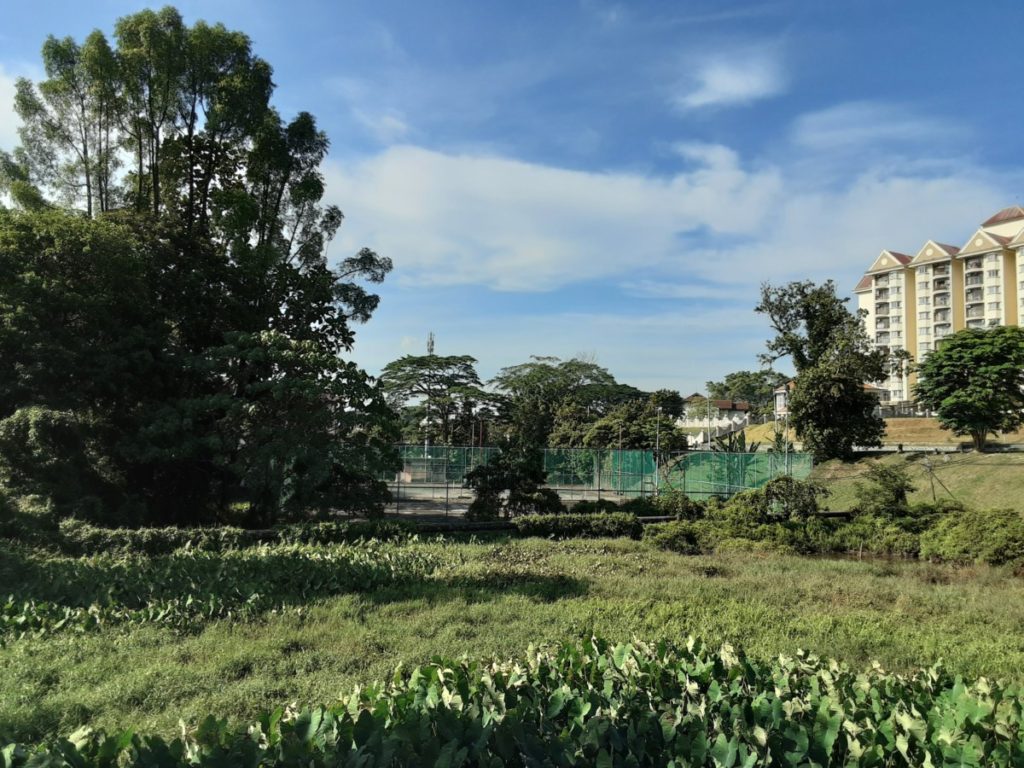 In general, the tablet is a fair workhorse that works best for content consumption and casual gaming.

The large size of slates means that manufacturers can cram in fairly large batteries into them and the Galaxy Tab A 10.1 manages to incorporate a 6,150mAh into its 7.5mm thin casing. WIth data constantly on, all day use of social media, an hour or two of PUBG and streaming several episodes of Umbrella Academy nonstop, the tablet was easily able to last for an entire day. 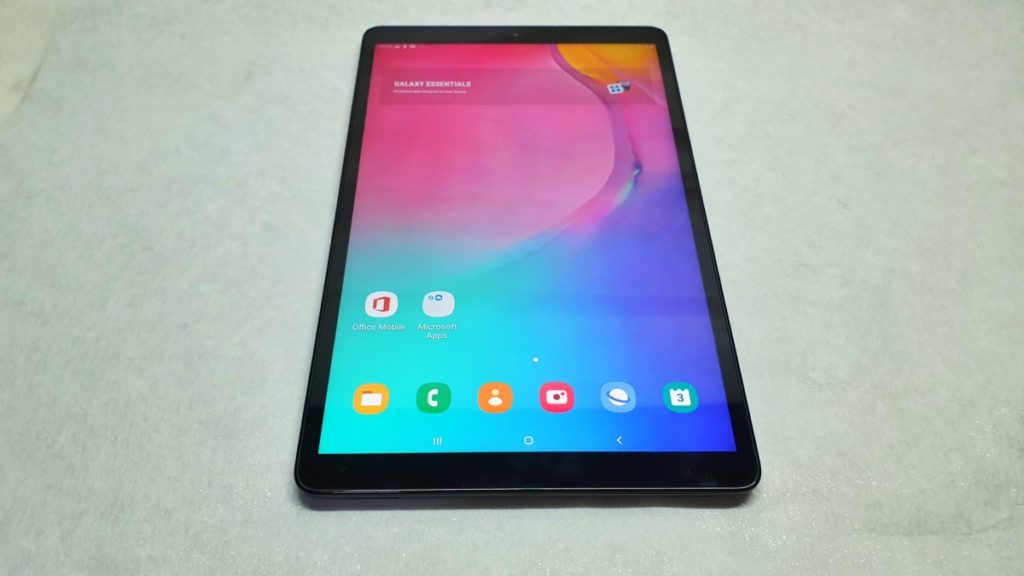 In terms of pricing the Tab A 10.1 comes at an interesting price tag as tablets go. While it does cost a bit more than what its specifications would indicate, you’re getting a large 10.1-inch WUXGA display and exceptional endurance along with an efficient if modestly powered set of hardware to let it play movies and most games in a fairly smooth fashion. If you’re focused on enjoying movies and web browsing on the go rather than full-on gaming or productivity duties, Samsung’s latest slate is well worth a look.

What we liked Excellent battery life, vibrant and crisp display, good build quality, runs Android Pie
What we didn’t Middling cameras, no fast charging
We say The Galaxy Tab A 10.1 2019 is an ideal slate for enjoying digital content with a large and luscious display as well as sufficient horsepower and battery life for enjoying movies and web browsing on the go.