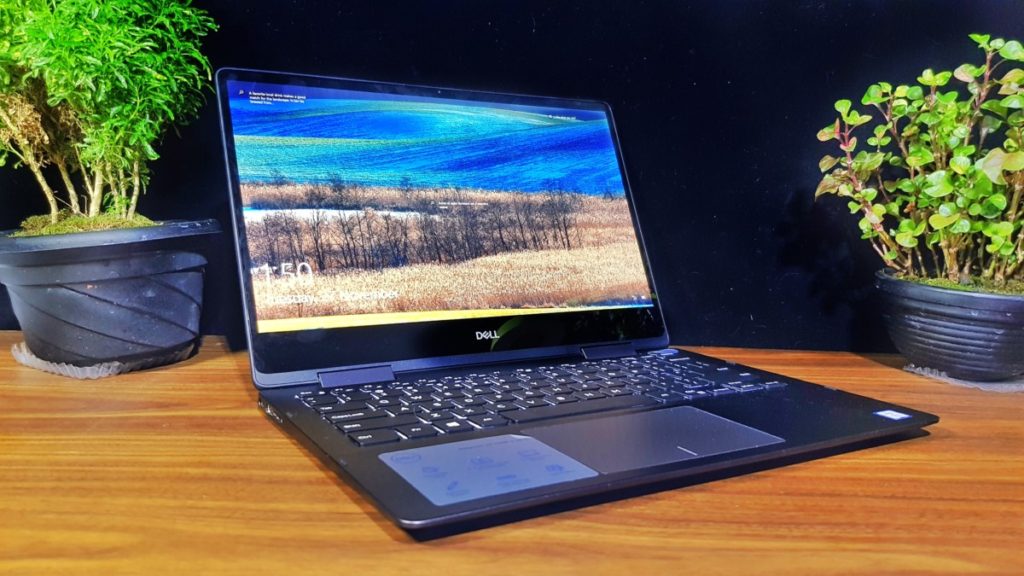 Well made and impressively specced, the Dell Inspiron 13 (7386) 7000 is one of the most powerful two-in-one notebooks that money can buy though modest battery life means that it is best suited for short power meetings away from the office.

This refresh of the Inspiron 13  (7386) 7000 2-in-1 that debuted at IFA awhile back was something that caught our eye as it sought to incorporate some of the best features from Dell’s high-end XPS convertible range but at a more affordable price point.

The latest incarnation of the Inspiron 13 (7386) 7000 2-in-1 is available in multiple configurations that vary based on storage and display type though all of them come with touchscreens, the latest eighth generation Intel processors and m.2 PCie solid state drives. Our test unit was the most powerful of them all with every conceivable option maxed out – a 13.3-inch 4K display, an 8th gen Intel Core i7 processor, 16GB RAM and a 512GB solid state drive. 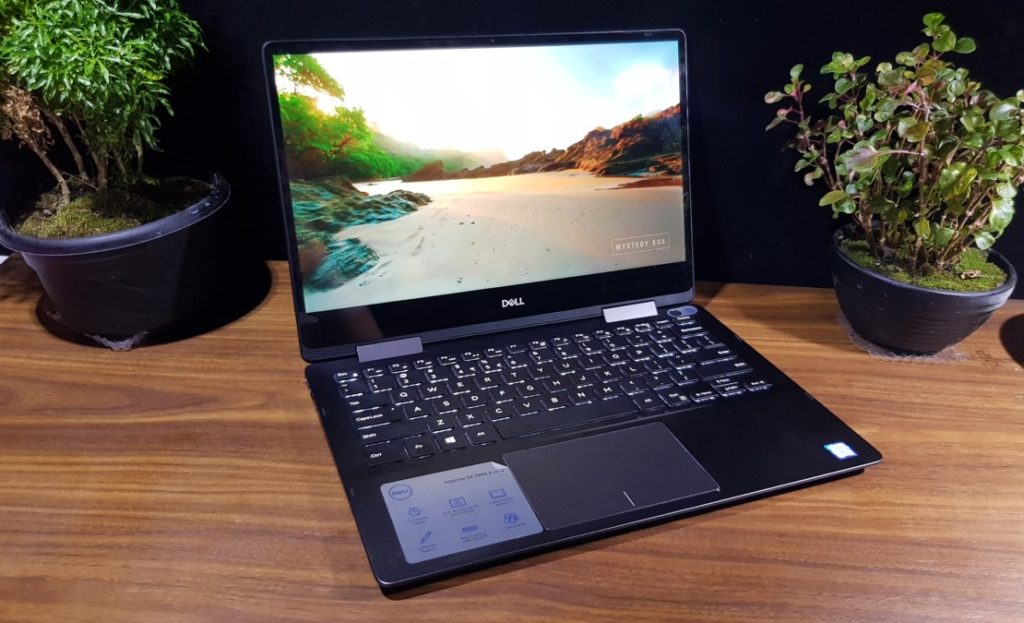 Externally, the notebook is done up in a matte black finish all around that repels fingerprints nicely.  It has also been spotted in a brushed all-aluminium silver finish.The notebook eschews frippery or aesthetic embellishments of any sort save for the Dell logo on the top lid done up in silver trim which adds to it business-like appearance when you whip it out during a meeting.

The right side hosts a USB 3.1 port, an audio jack and a microSD card reader while the left hosts the charging port, a HDMI 2.0 port and a USB 3.1 Gen1 Type-C port. More ports would have been welcome but what is available works in a pinch. The base of the notebook is bare save for grilles for the bottom-firing speakers and a pair of rubber friction pads. 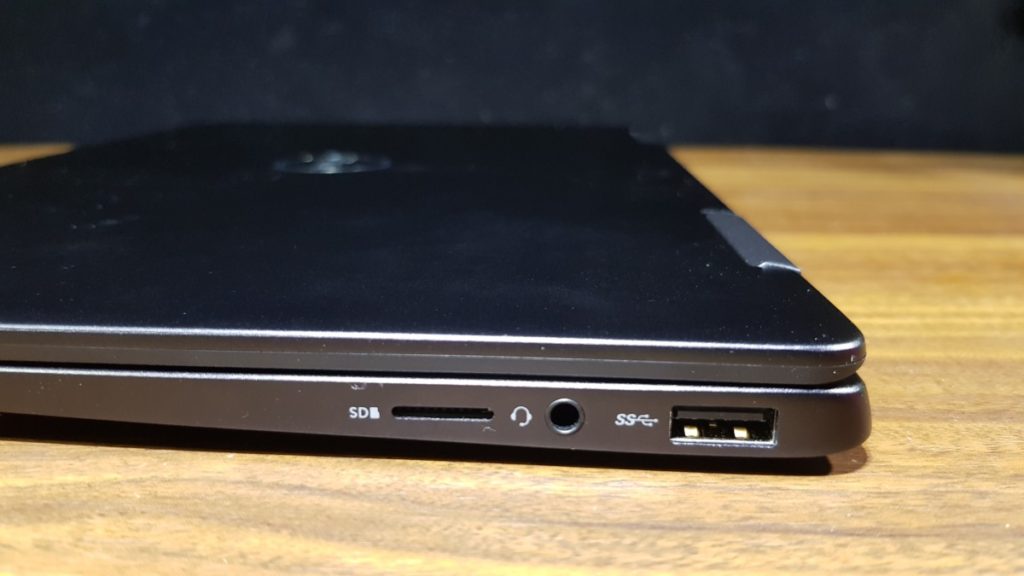 Flip the lid open and you’re greeting by an impressively designed 13.3-inch touchscreen with 4K resolution held up by a sturdy pair of 360-degree hinges that let you deploy the Inspiron 13 7000 in any of four different ways – as a conventional laptop, as a display, as a table and upside-down tent-style for viewing from a distance with a built-in accelerometer deftly adjusting screen orientation as needed.

These hinges are as sturdy as they come and bar direct intervention are wobble free. Unfortunately, the tradeoff here is that the hinges are rather stiff which requires you to use two hands to open it which may irk some users. The top itself is just as solidly built without any bending or play whatsoever. The bezels are exceptionally slim though they are made of plastic which is only apparent on very close inspection.  Of note is the exceptional slimness of the Inspiron 13 (7386) 7000’s bezels that measure about 1.83mm thin on the short and top edges which makes it slimmer than even this year’s XPS 13 (9370) refresh which has 4mm bezels. 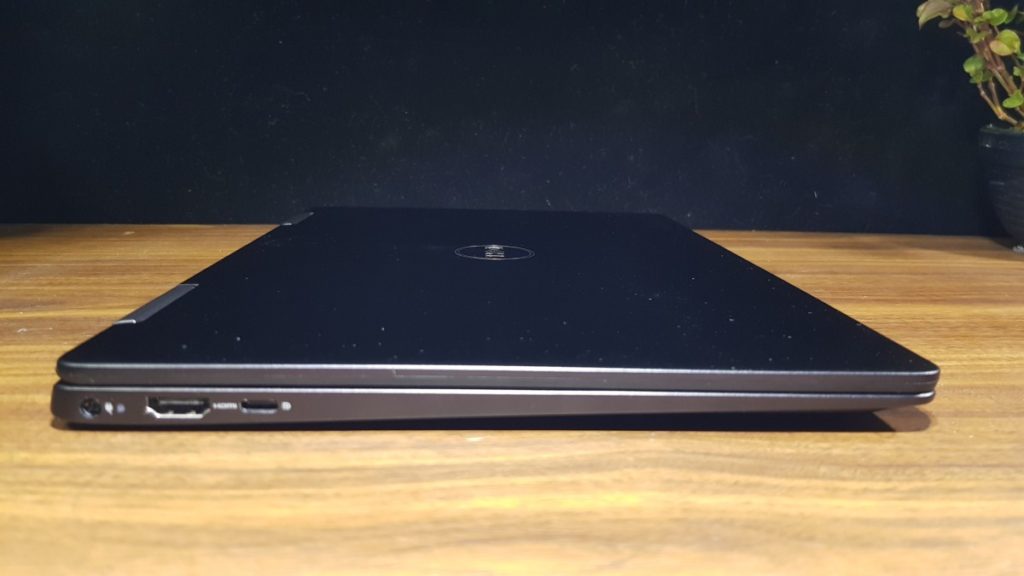 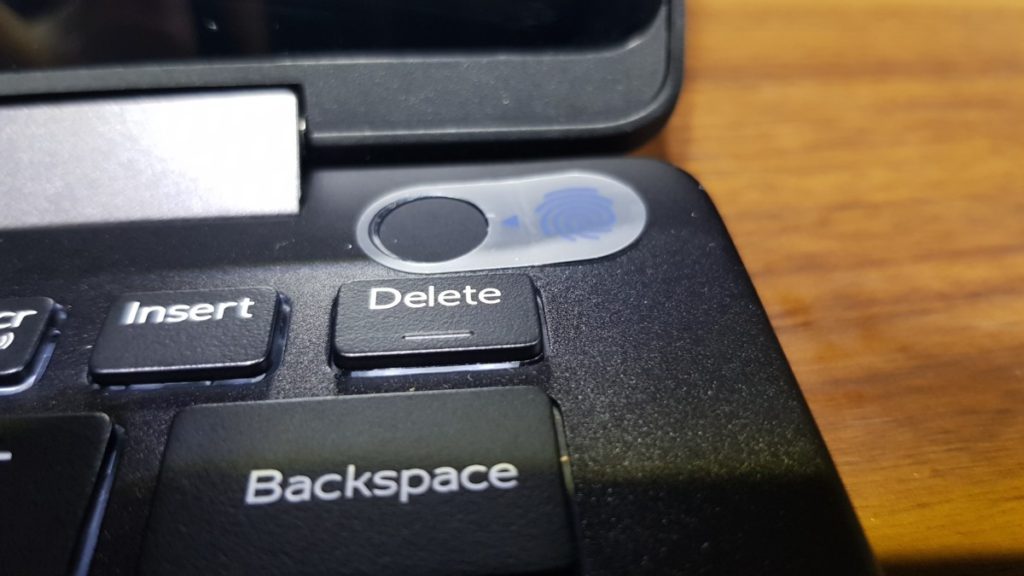 As far as build quality goes, the Inspiron 13 7000 is very well appointed though it is primarily made of plastic with aluminium on the top lid and base of the chassis whereas its more premium cousin the XPS 13 uses more weight saving materials like Gore fiber to pare the weight down even further  though the Inspiron’s 1.4kg carry weight is still light enough for daily use. Fortunately, its power brick is also compact enough at the size of a tetra pack drink box to make toting it and the notebook in your backpack a realistic prospect.

Starting from the ground floor, an entry level variant of the Inspiron 13 (7386) 7000 2-in-1 is equipped with a 13.3-inch 1080P display, an eighth generation Intel Core i5 processor, 8GB RAM and a 256GB M.2 PCie SSD for about RM4700. Our test unit starts off from the other end of the scale and has the best hardware that Dell could cram into its 13.7mm thin chassis while also boasting of a lower price tag than its higher end XPS 13 cousin. With an equivalently specced model, the XPS 13 (9370) costs RM8,369. That’s a substantial RM1,870 discount for a minor trade-off in weight and build quality.

Out of the box, our top-specced variant of the Inspiron 13 7000 comes with an eighth generation Intel Core i7-8565U processor, 16GB of DDR4 RAM, a huge 512GB m.2 PCIE SSD and a razor sharp 13.3-inch 4K resolution touchscreen which has some of the slimmest bezels seen on a notebook short of an XPS 13. 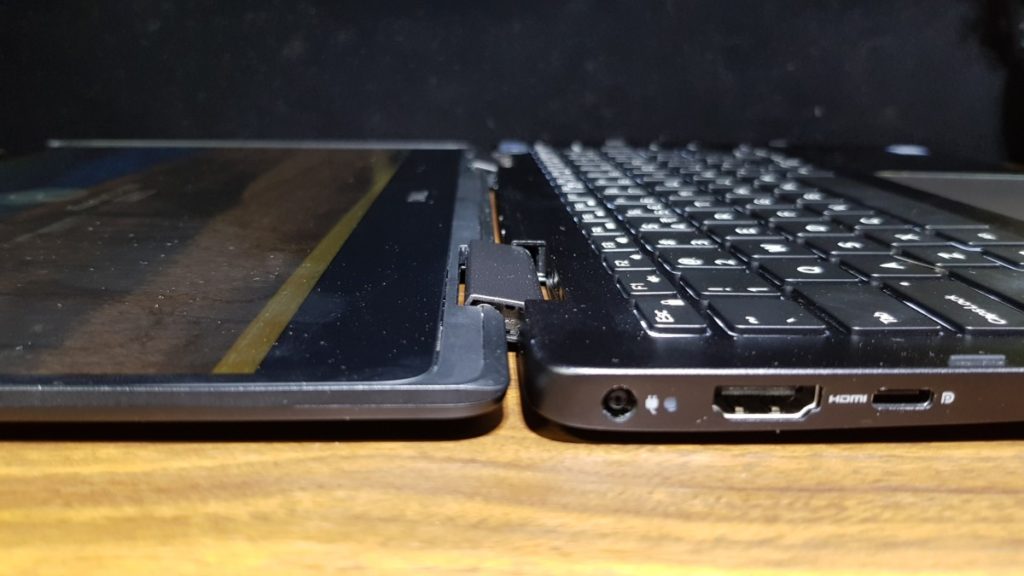 One particular feature of note with the new Inspiron 13 that Dell is particularly proud of is their enhanced webcam. Rather than the somewhat odd placement in the XPS 13 that was plonked at the base of the display and which gave people on the other end a rather odd view of your nostrils, the Inspiron 13 puts it back in its proper place up top of the display. Not only is the camera miniaturised to the point that it can comfortably fit into the narrow bezels up top, it also has a 4-element lens that uses what Dell calls Temporal Noise Reduction tech to enhance footage under low light.

When put to the test, the notebook  did not disappoint. It started up in seconds and unlocking it via the fingerprint reader proved gratifyingly swift. When subjected to the usual rounds of web browsing, paperwork, spreadsheets and the like, it met the test with flying colours. Multiple browser windows opened in mere seconds and it even managed a spot of light video rendering for a short clip or two without undue trouble. While it is not intended for gaming, it is grudgingly capable of last-gen titles at low settings. 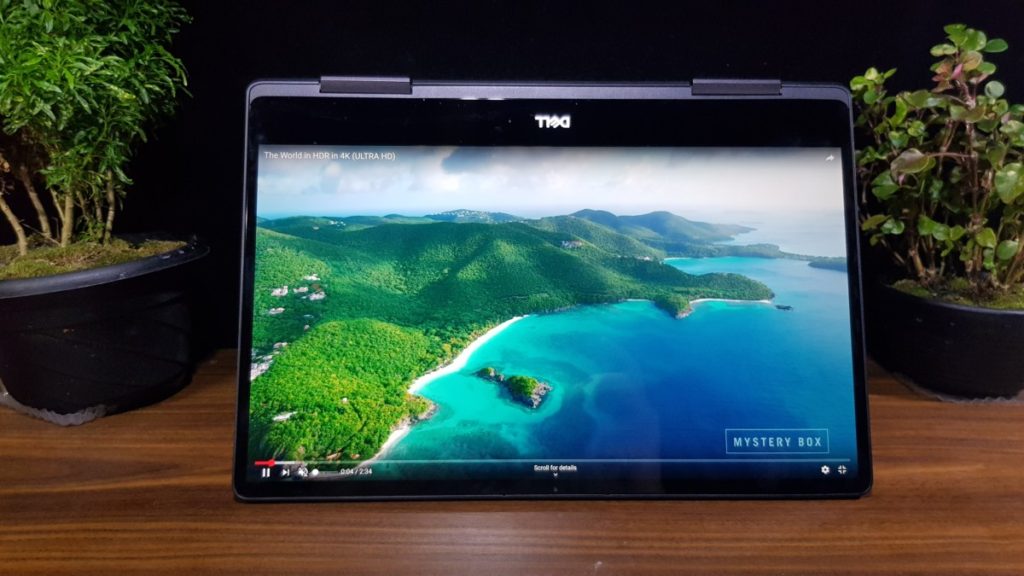 In Cinebench R15, the Inspiron 13 scored an impressive 50.12fps in the OpenGL test and got 522cb for the CPU. In the new 3D Mark test Night Raid, which tests notebooks with integrated graphics, it scored 5,275 points. In TimeSpy, it got a low score of 407 points, which is understandable seeing as the notebook isn’t intended for gaming in the first place and lacks discrete graphics. In PCMark 10 which tests for performance for productivity, it got a score of 3,228 points. In terms of read/write speeds, the notebook’s nippy 512GB M.2 PCiE SSD scored impressive 1760 MB/s read speeds and 1,430 MB/s write speeds. 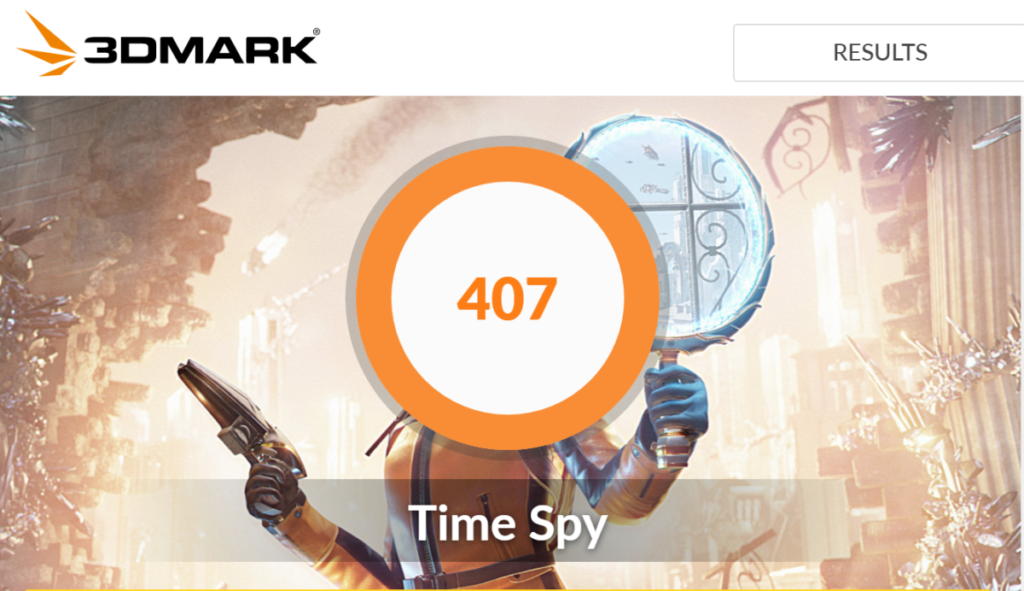 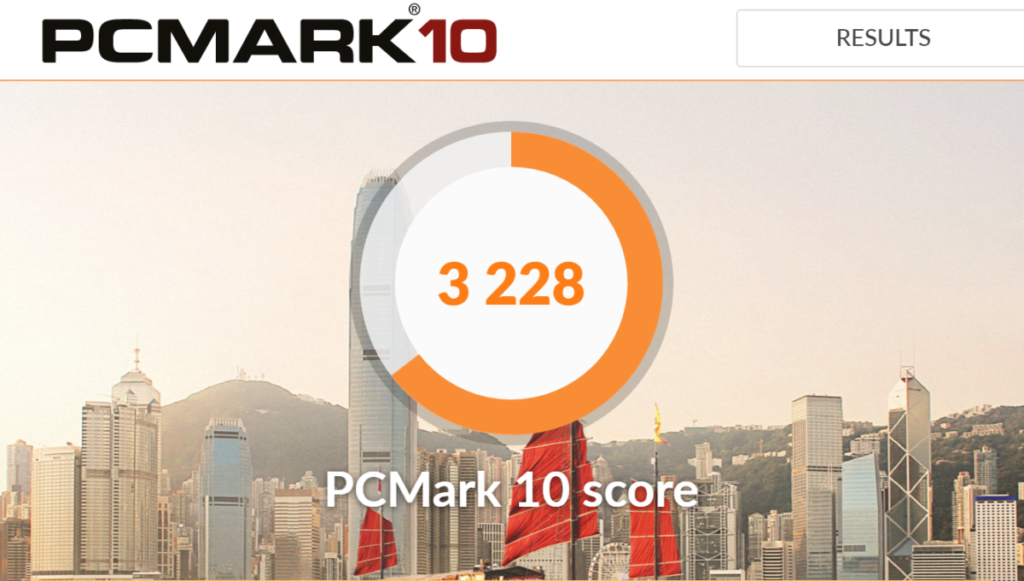 Seeing as this is a notebook intended for productivity, the quality of its keyboard is paramount. While the keys are hewn of plastic, they proved responsive with a typing test yielding a swift 99wpm. The backlighting proved helpful when typing under low light conditions. 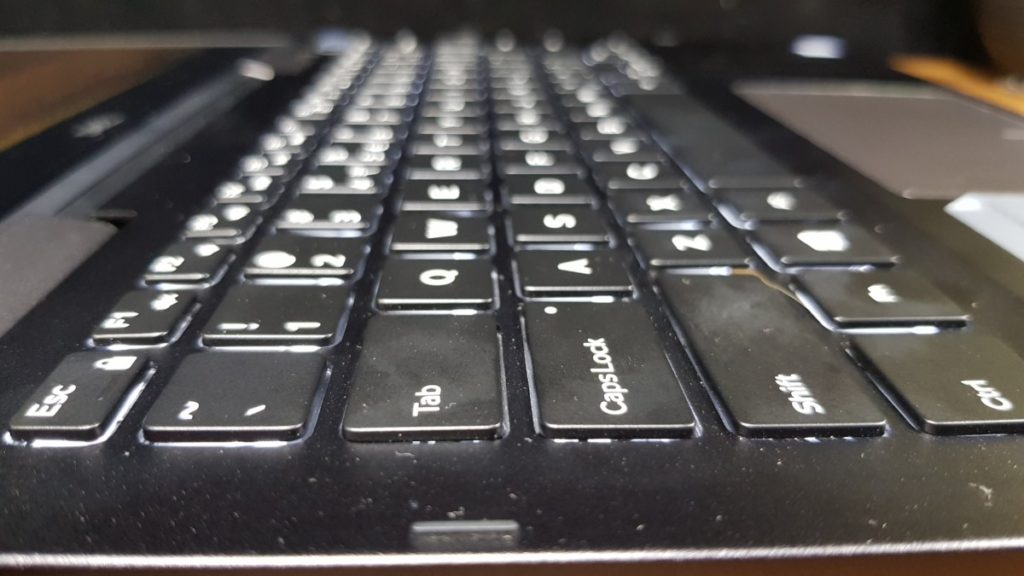 Of particular note is the Inspiron 13’s crisp 4K display that proved to be a treat to gaze upon. Colours were exceptionally vibrant and text was pin sharp while viewing angles were excellent. Screen responsiveness was excellent as well with swift touch input. Assuming you have 4K resolution content, the display is able to show it in its full glory. The paired stereo speakers were up to snuff as well with pleasantly detailed audio and enough volume to make it a viable choice for ad hoc Netflix streaming with friends on the go. Unfortunately, all this power and performance comes at a cost.

The highest end version of the Inspiron 13 has a lot going for it with powerful hardware and a luscious 4K display that makes it an excellent performer for all but intensive gaming and graphics rendering duties. Where it falters though is endurance as the notebook barely lasts more than five or so hours on balanced settings with modest usage – that means not attempting to do something like gaming or video editing at full tilt –  before you need to find a power outlet.

If you’re doing something fairly intensive like editing a video, it also tends to run hot with a rather audible whirring noise from the internal fans. All this makes it best suited for short forays from the office. Fortunately, it has a rather compact power brick which makes recharging it in the field a viable prospect. 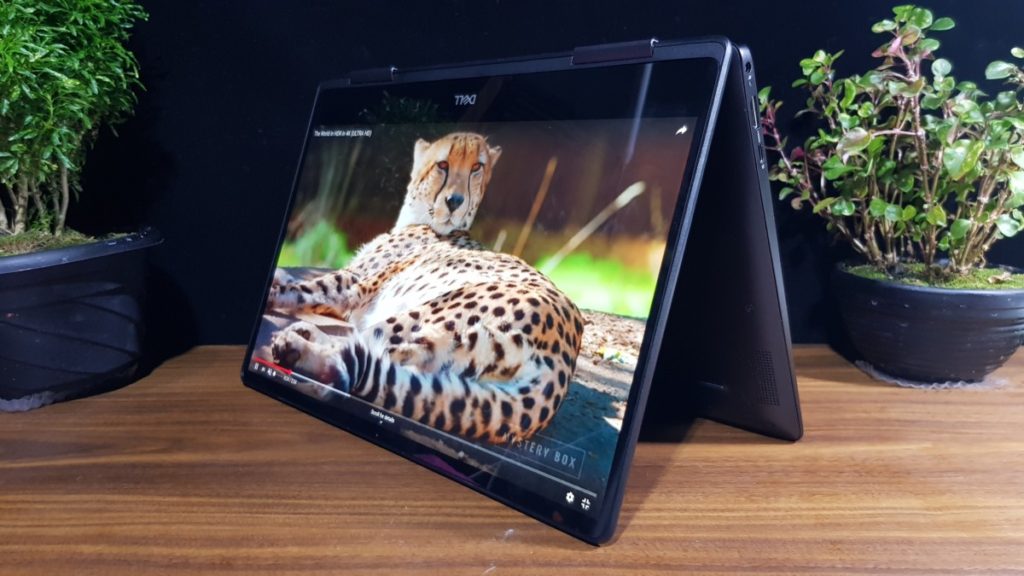 What we liked Exceptional 4K display, impressive hardware, fast performance, great keyboard, has Dell Mobile connect
What we didn’t Runs rather hot, average battery life
What we say Well made and impressively specced, the Dell Inspiron 13 7000 is one of the most powerful two-in-one notebooks that money can buy though modest battery life means that it is best suited for short power meetings away from the office.