The remake of the original Battlestar Galactica series from the late 70’s saw the wholesome sci-fi series with Mormonesque undertones replaced with a far grittier remake that retained the framework of the show but thrust in all manner of post 9/11 allegory and a radical change in some parts of the series that had some fans going into epileptic fits of apoplexy. ‘Starbuck a woman?’ They said before frothing at the mouth and gnashing their teeth on the carpet. 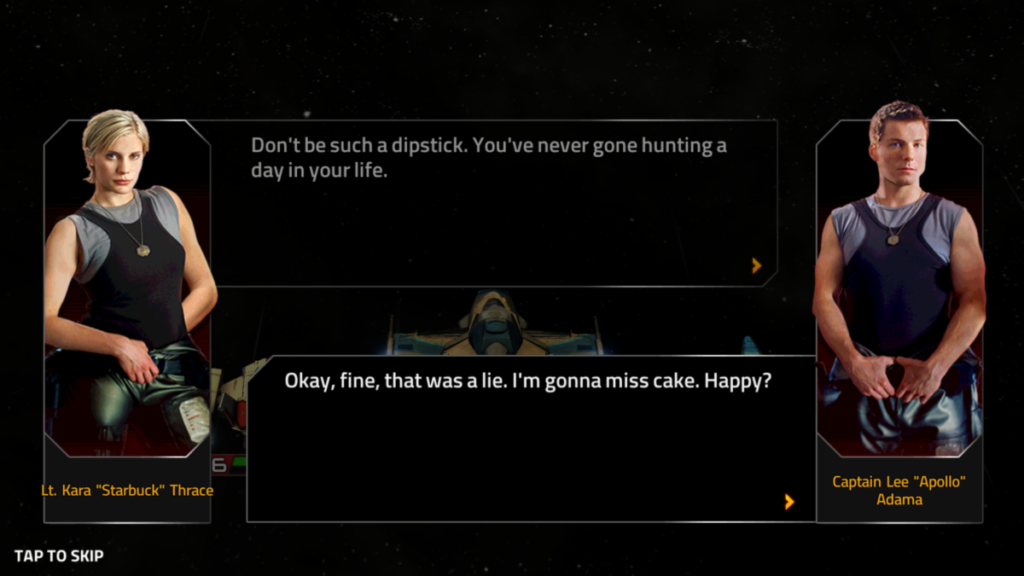 Lo and behold, the remade Battlestar Galactica series in 2004 spawned four seasons of the eponymous space carrier dodging murderous robot Cylons before wrapping it all up in a major WTF-moment of them finally finding ‘Earth’. That’s not counting the two prequel series set before the start of the show and the made-for-TV movies after too. Alas, the series just fizzled out over the years once more, the hype just died down and while there has been talk of a movie, it has so far remained relegated to the nether depths of developer hell thus far. Imagine our surprise when Battlestar Galactica: Squadrons popped up on Google Play for download.

Developed by Canadian-based developed studio Ludia, the game is essentially a card collection game of sorts with combat PvE mechanics and a ton of in-app purchases with a number of associated timers and resources to keep an eye on.

The Fall
Battlestar Galactica: Squadrons, as you’d likely surmise, revolves around collecting fighters of various sorts to take part in battles against a whole stream of Cylon enemies. For the uninitiated, the Cylons are your average sentient robot race rising up in armed rebellion and have an obsession, at least in the remake, of mimicking humanity by creating organic bodies for themselves. That and putting humanity as a species into the history books. As the leader of Galactica’s fighter squadrons, it’s your job to make sure the latter does not come to pass. 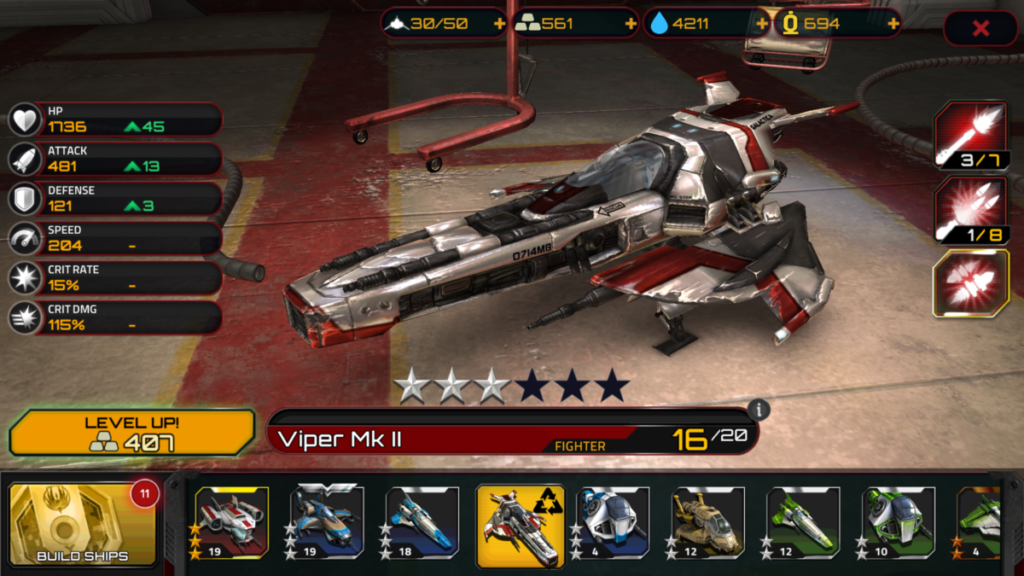 The tutorial initiates you into the mechanics of the game in a fairly smooth fashion and doles out some resources to get you started. The game gives you a couple of new fighters of fairly low level to play with and then tosses you into your first battle. It’s a turn-based affair versus a pair of push-over obsolete Cylon Raiders. You shoot them. They shoot you. Rinse and repeat until one side or the other explodes. The sequence of each turn varies based on the speed and initiative of each combatant: the faster you are, the earlier you go in the turn. When it reaches the turn of each unit you control, you get to choose to attack or use a special ability be it to debuff the enemy, buff your side or perform a special attack of some sort. Each different type of fighter you will encounter and collect has different abilities which is why a diverse ‘squadron’ in a fight is needed to win. 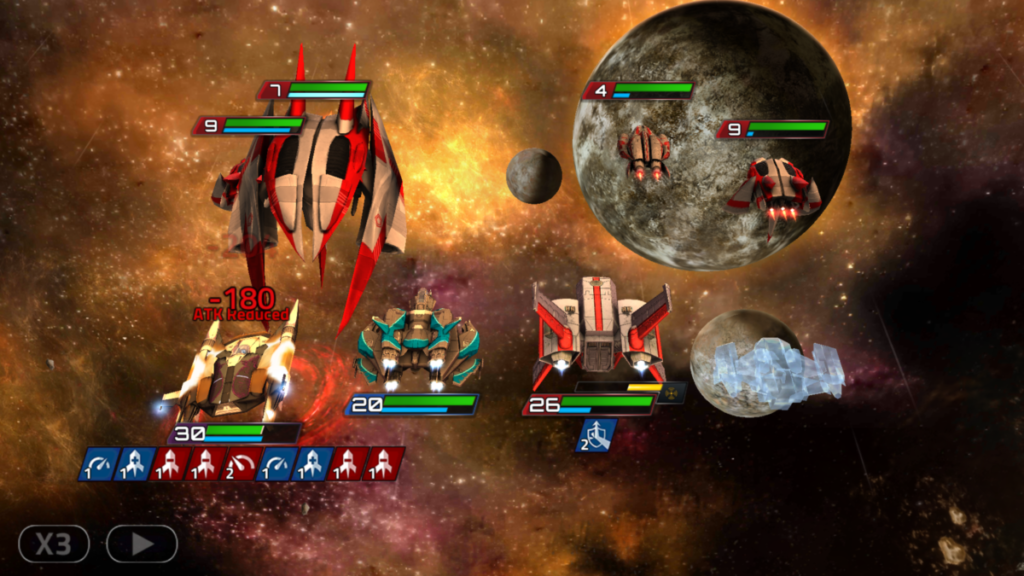 Once you’ve mopped the floor with the first tutorial dogfight, the management bits set in. The storyline of the game takes places across most of Season 1 split across a dozen plus ‘chapters’. The first time you play through a chapter, the game will run through a few lines of dialogue from the characters in the miniseries. As you complete missions, you’ll gradually rescue additional capital ships to join your ragtag fleet. You start off with only the Battlestar Galactica but later on can get a bunch of auxiliary ships that unlock additional abilities such as a black market to buy upgrades or new ships. 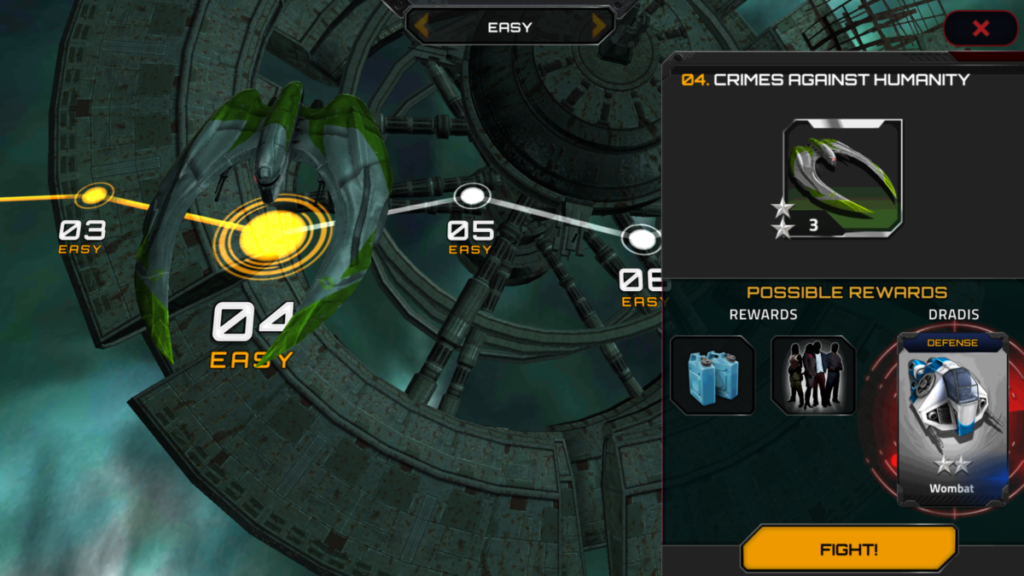 Like any element of a collectible game, there’s a ton of things to collect. In BSG: Squadrons, you collect fighters, each of which comes in five different types and four different variants
delineated by colour. In a rock-paper-scissors fashion, red coloured fighters beat green ones and green ones trump blue ones while blue coloured fighters squish red ones. Purple coloured ships trump gold ones and vice versa. The circle of gaming life, so to speak. Unfortunately, it gets more complicated as fighters are also divided into different variants like bombers, support craft or recon craft, each stronger or weaker in a fight with other ship types with different abilities. Still with us? Good. It goes bananas as each craft in a certain colour also comes in a certain rarity. Bronze star graded ships are crap and only have at most two special abilities. Four star gold elite ones have the full monty with up to four special abilities at their disposal. The clincher here is that each fighter has to be levelled up in battle so you’ll have to go through a serious amount of grinding to get anywhere in the game. 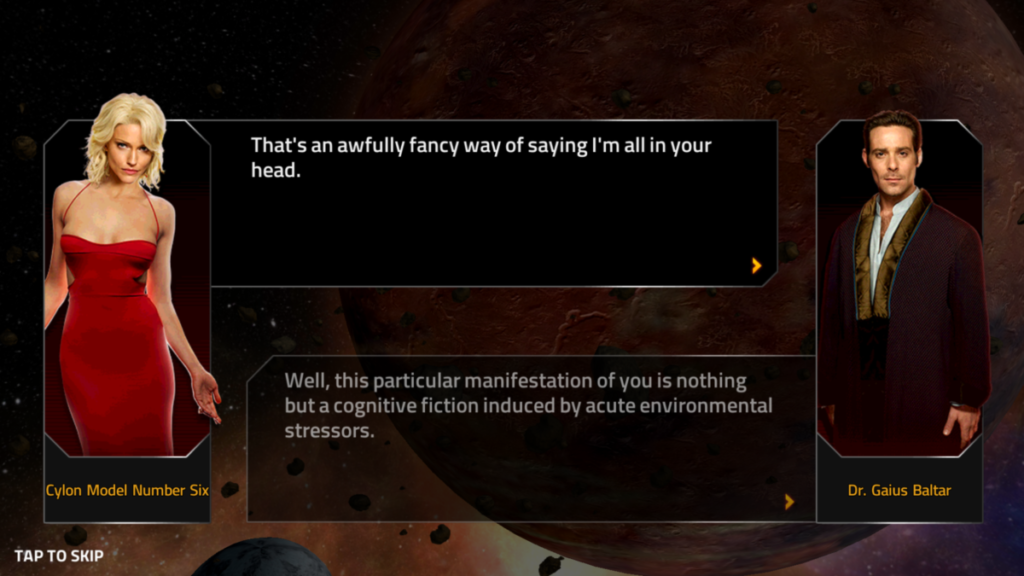 The ingame battles offer quite a lot of depth with tangible nuances in each encounter. Well, in theory anyway. Unfortunately after you leave the safe harbours of the first one or two chapters, the game ramps up the difficulty level rapidly with incredibly tough enemies in every colour of the rainbow. Some constantly regenerate meaning that you have to whale on them like mad to even put a dent in them. Others are armoured like a flying tank and can call in additional ships to help them out too. To add insult to injury, they can even attack all the ships in your posse at once. While the odds are not insurmountable, you’ll either need a lot of real world cash or a lot of patience to grind your ships up to the proper levels to even survive a firefight which means constantly revisiting completed missions and grinding them over and over again for loot and experience points.

The Fleet
In between the story missions, you get to gaze on the fleet of capital ships that you have acquired over the course of the campaign and tinker with your fighters. While there is no customisation, so to speak, you can pay the cost in Metal to level up your fighters. You can also expend Water – that’s a resource too – to purchase components which then go to fighter upgrades. What you’ll constantly be stressing out over though is your population which is another resource that affects your random card unlocks; lower population means crappier free stuff doled out to you daily. Barring a few circumstances you don’t get extra population handed out to you for free. Whenever you encounter random battles outside of the storyline missions, a counter starts ticking and you start losing people until you either complete the random battle or flee which incurs a fixed cost on population too. 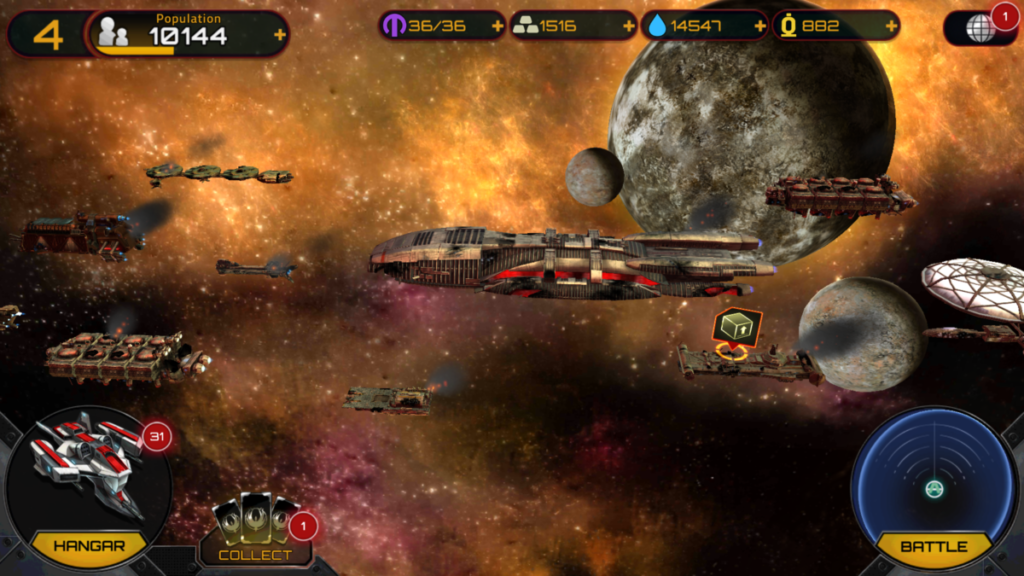 If you happen to lose a battle, you’ll have to fork out ‘Cubits’, ingame currency to repair them. Keep botching missions and things can get very expensive. Every time you sortie out on storyline missions or random battles, you’ll also have to fork out ‘Tylium’ that recharges every few minutes. Of course, you can always pay real world cash for Cubits or better ships by paying a whopping RM220 bucks for a top-tier card pack that promises a four star gold ship. If you’re as frugal as the rest of us, you’ll just have to grit your teeth and grind, grind, grind. 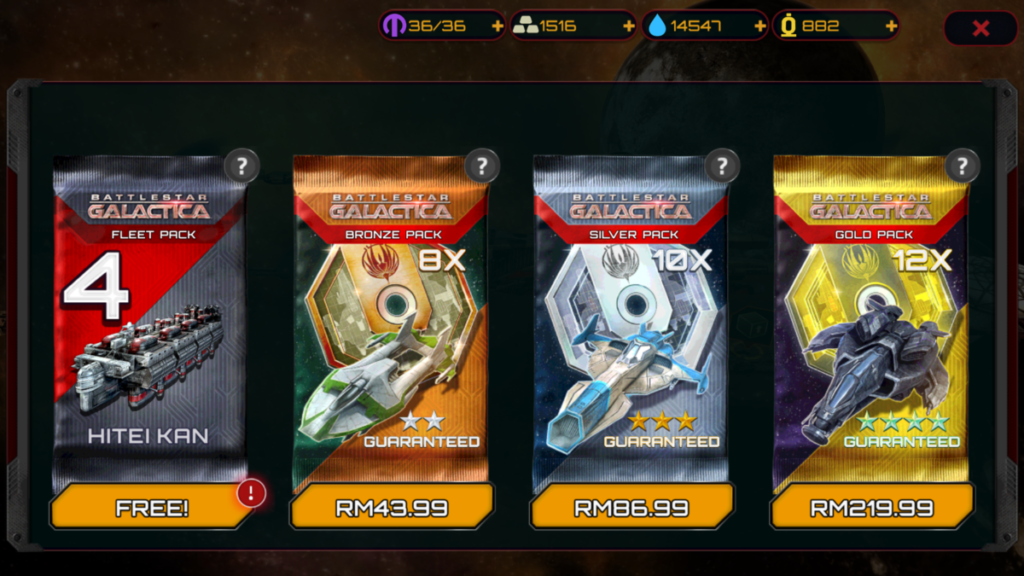 In terms of audio, there’s little of note barring the title screen which has the US version of the theme song rather than the more popular Gayatri Mantra opening. Battles ingame are complemented by an unexceptional amount of beeping, blooping and whooshes. Granted, you can’t hear anything in space but more decent explosions would be nice. The fleet management screens simply have bland background music. Fortunately, the main saving grace here are the luscious visuals. You can zoom in and rotate the camera to ogle each and every one of your fighters and for fans of the show, it’s a treat seeing all the new ship variants. 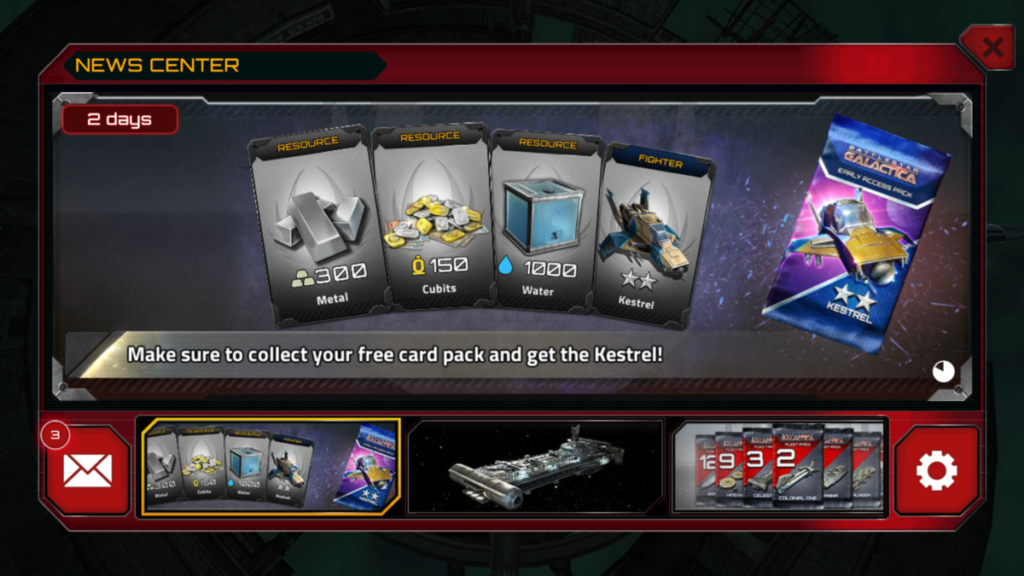 Lore fans aside though, it’s a fairly steep solo romp that ought to last you a good two dozen or so hours, tops if you just aim to finish the campaign. There’s no multiplayer available so once you’ve collected your amazing fleet of exotic fighters, there’s really no one else to sic them on barring the woefully dim but ridiculously overpowered AI. 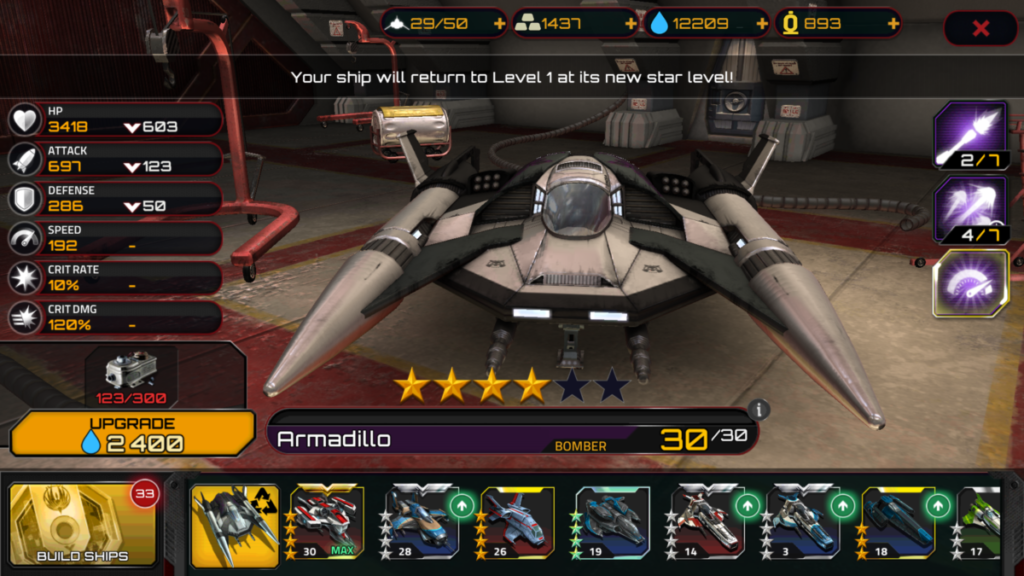 For those who love Battlestar Galactica, the game is a wonderful homage to the show and an eye opener as it adds little bits of flavour text for each ship and fighter that you acquire. There’s dozens of new ships, both friendly and hostile, that you’ll see in the game over the Miniseries’ spartan Mark II Viper, Raptor and Raider. For those who aren’t hyped up on the mythos of the game, it’s a competently done collectible card romp that’s best in small doses.