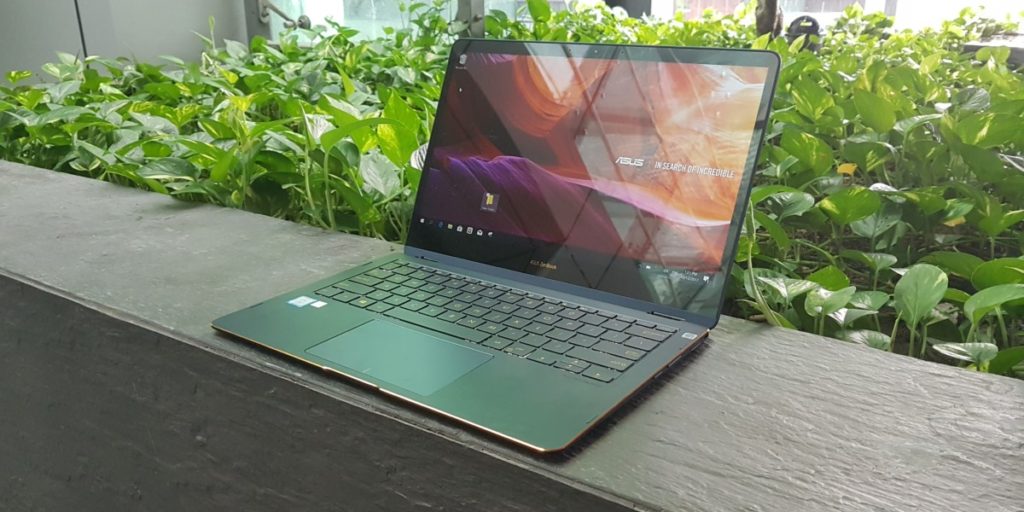 Beautifully hewn, slim and light, the Asus ZenBook Flip S offers exceptional lightness and portability along with superb build quality though it does not come cheap.

Asus has been on a roll of late with an array of notebooks to suit all budgets and needs. This, the Zenbook Flip S aims to pander to the needs of those who need an ultraslim convertible that prioritises performance and good looks. 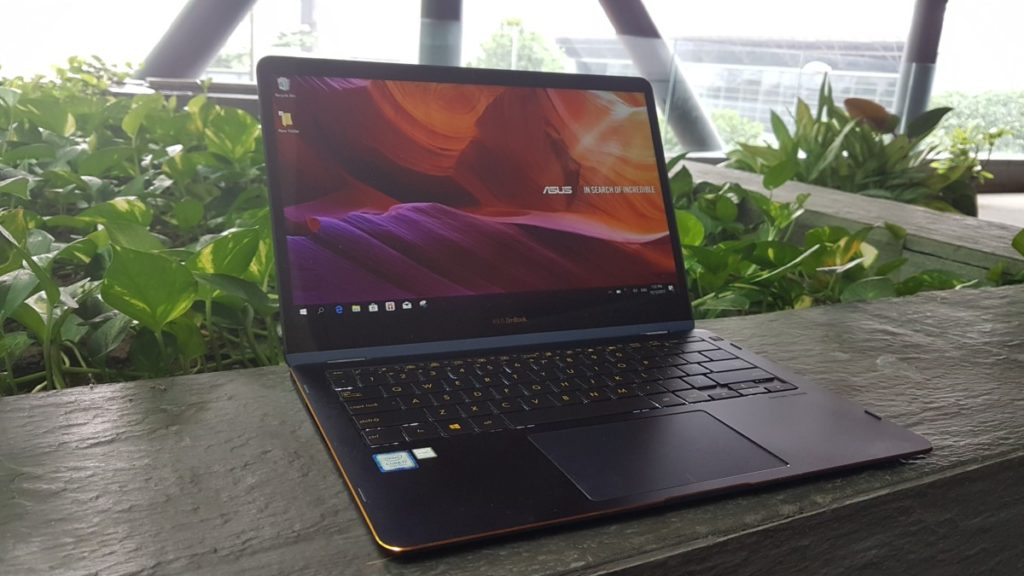 Officially designated the Zenbook Flip S UX370UA, this svelte convertible is, at present, the world’s slimmest and lightest convertible as it only weighs 1.1kg while measuring in at a waifishly slim 10.9mm. This lightness is achieved on account of the whole casing being mostly hewn from a single block of aerospace-grade aluminium and it cuts a striking figure indeed from any angle. 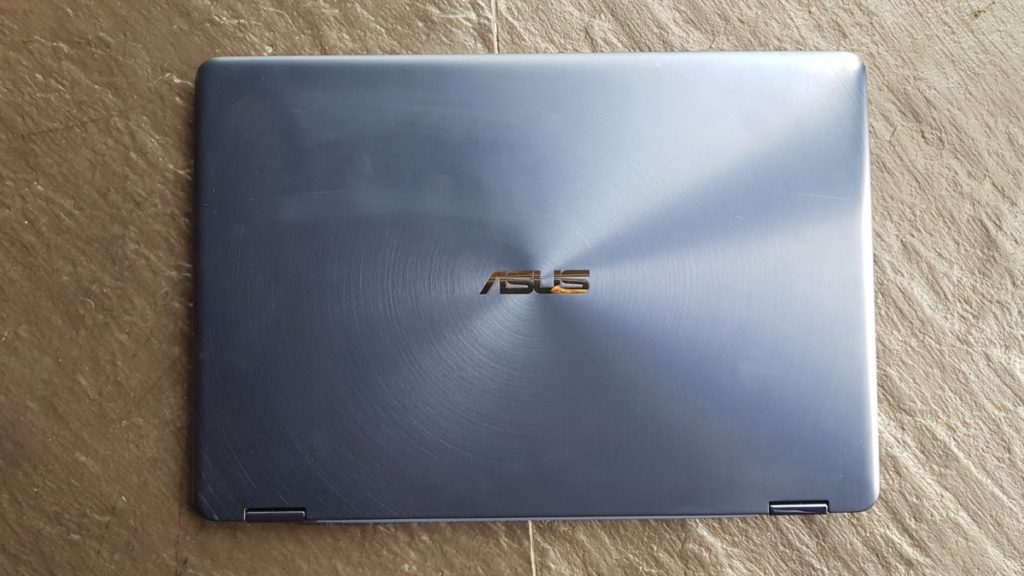 Externally, the Zenbook Flip S bears all the hallmarks of Asus’ ZenBook series including a brushed concentric metal finish that radiates out in circular patterns from the Asus logo on the top lid. The notebook itself is primarily finished in a shade of royal blue with gold trim on the sides along with chromed hinges. The finish itself looks exceptionally posh and it even repels fingerprints to a modest degree though the occasional wipedown is necessary.

The base of the notebook is otherwise unadorned bar the inclusion of two bottom-firing SonicMaster Premium speaker vents at the base along with a quartet of rubberised feet. 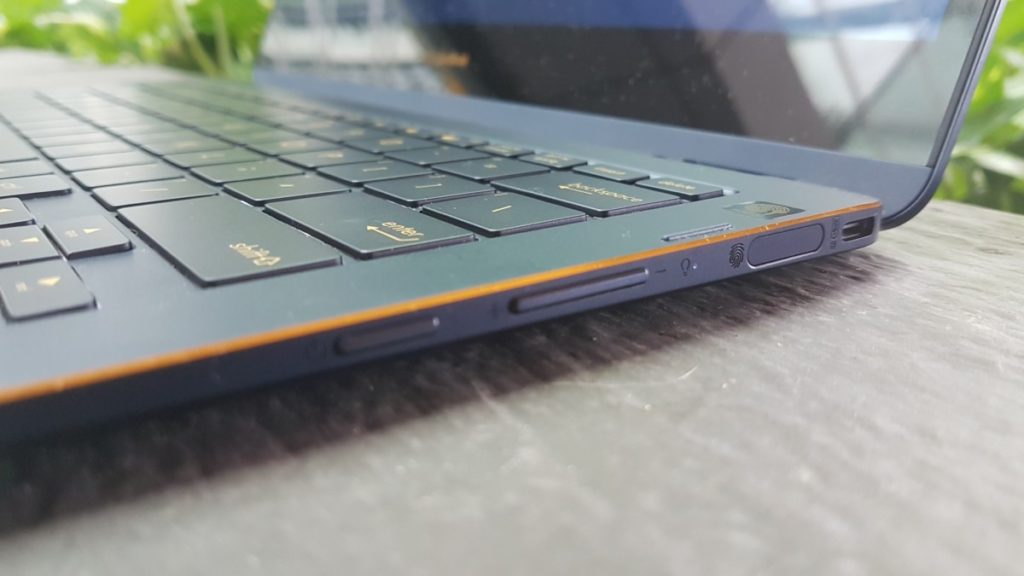 The right side of the notebook sports a volume rocker, a power button, a USB Type C 3.1 port as well as a side-mounted fingerprint reader while the left side comes with an additional USB 3.1 Type C port for charging and docking duties as well as a 3.5mm audio jack. The dearth of ports is somewhat disconcerting, especially if you are wont to use portable drives and other gear though they’ve compensated somewhat with a free bundled mini dock that throws in a HDMI port, a USB 3.1 port and a USB Type C port with fast charging support. 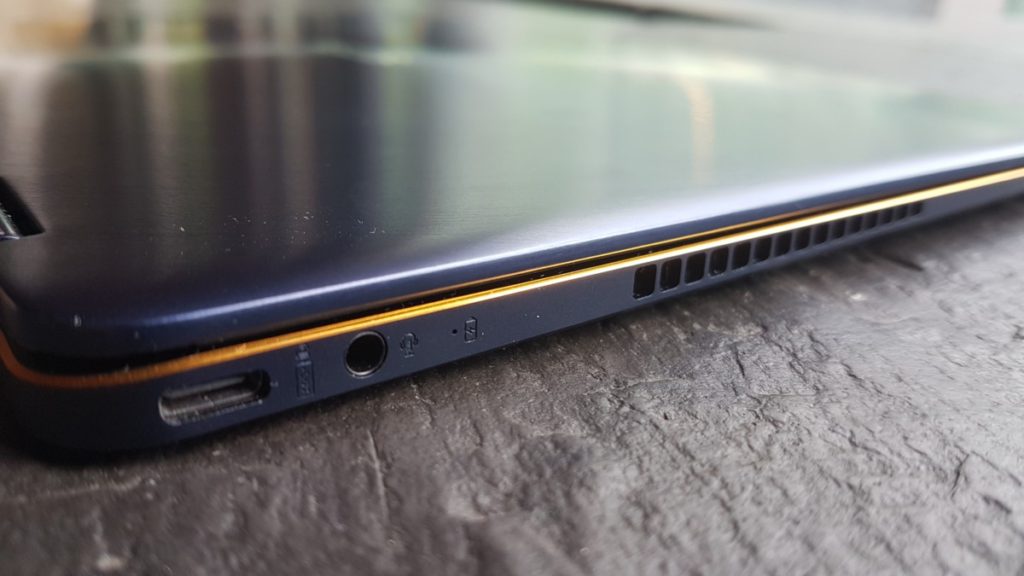 Also bundled with the notebook is a stylus pen for you to sketch, annotate notes and whatnot. The pen itself is also hewn from aluminium and feels especially sturdy with a heft resembling a high-grade fountain pen. It’s an interesting bonus though one with mixed utility depending on what you use the Flipbook S for. Unfortunately, there’s no way to dock or keep the stylus with the Flipbook S, which is a downer as the odds of you misplacing it rise significantly.

The double hinges on the Zenbook Flip S are especially sturdy, deploy smoothly and are free from wobble, allowing you to deploy the notebook in all the usual modes – laptop, tablet, tent and display mode as the situation warrants. 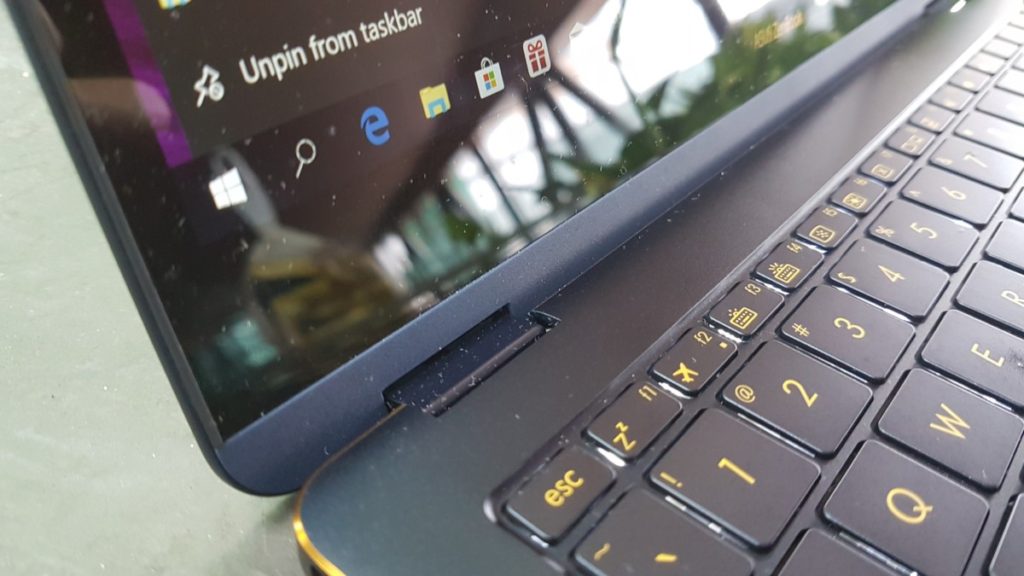 Popping the lid open reveals the 13.3-inch Full HD touchscreen along with a chiclet-style backlit keyboard along with the touchpad trimmed in gold.

Overall build quality is on the whole excellent and despite its slimness and lightness, it looks and feels remarkably sturdy indeed. While the notebook also comes in a black and gold trimmed variant, Malaysia only has the Royal Blue version available.

Our test unit for the Zenbook Flip S UX370UA is akin to the retail versions available in the Malaysia market in terms of the overall hardware configuration. The 13.3-inch Full HD LCD touchscreen has a 60Hz refresh rate and covers 100% of the sRGB colour gamut. The bezels itself are extremely slim as well at 6.11mm and contributes to the display offering up an 80% screen-to-body ratio. 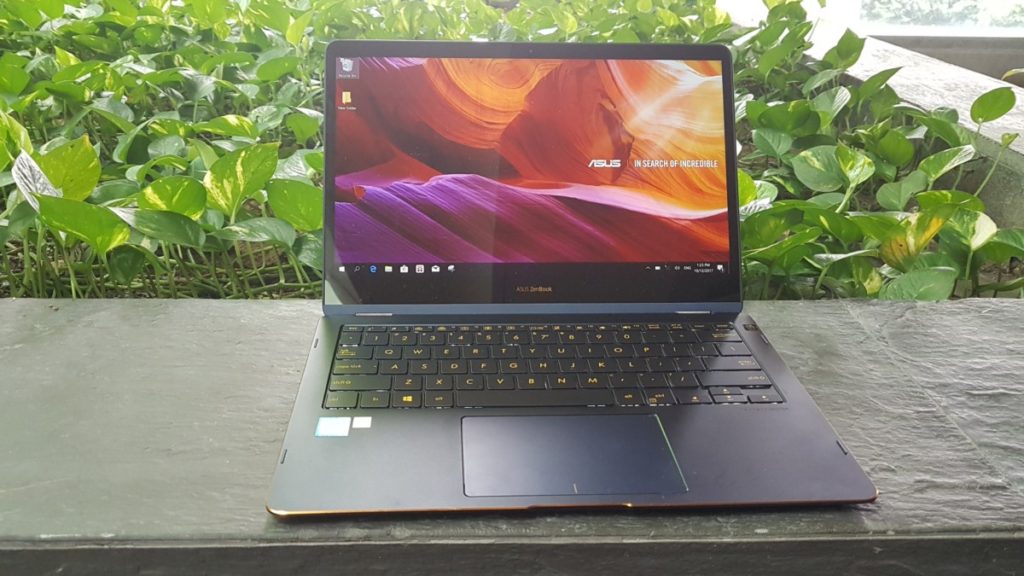 Running under the hood is Windows 10 Home on an Intel Core i7-7500U 2.7GHz processor paired with 8GB DDR3 RAM and a 512GB SATA3 SSD. The notebook lacks a graphic card and instead relies on an Intel Integrated HD Graphics 620 setup.

Boot-ups are exceptionally swift and the ZenBook Flip S boots into the desktop in a matter of seconds. An internal accelerometer adroitly adjusts the orientation of the screen in whatever mode you deploy it in.

Browser windows opened up in a pleasantly swift fashion and the notebook itself was able to handle the usual battery of tasks expected of an ultraportable convertible including running the odd video or two, spreadsheets, emails and the like. It even managed to run Borderlands 2 on low settings if you ever feel the need to indulge your trigger finger.

In benchmarks, the Flip S  achieved a decent overall score of 3,152 in PCMark and it CineBench R15 yielded a score of 309cb for CPU performance as well as 33.7fps in OpenGL; modest though it fits its intended usage for productivity oriented tasks. 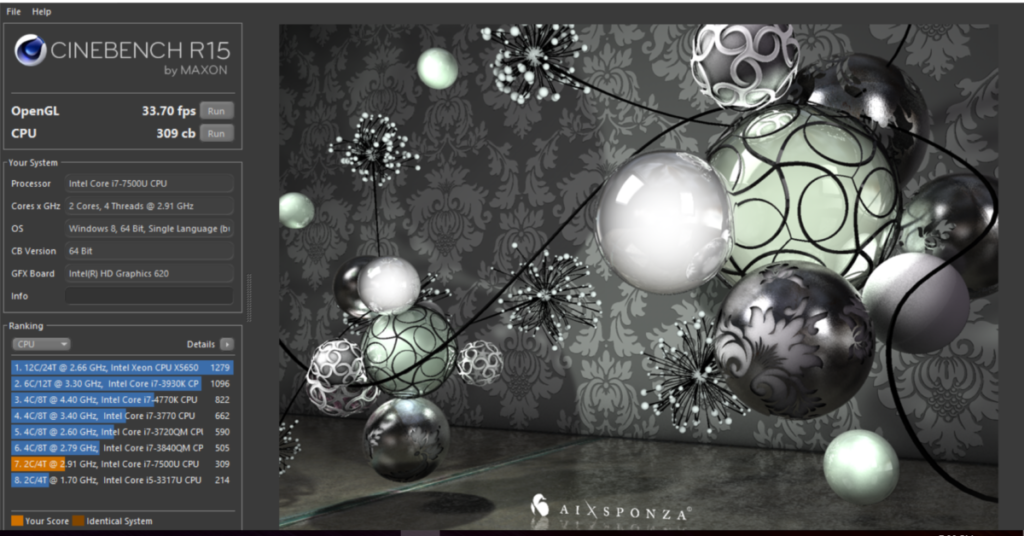 The keyboard itself is roomy, with generous palm rests and is sufficiently responsive enough to allow for typing out extended tracts of text on the go. The backlighting is adjustable and it comes in extremely handy if you’re wont to type in dimly light areas like on red-eye flights and the like. The wide touchpad is also quite responsive and supports two-finger gestures for pinch zooming and web browsing. 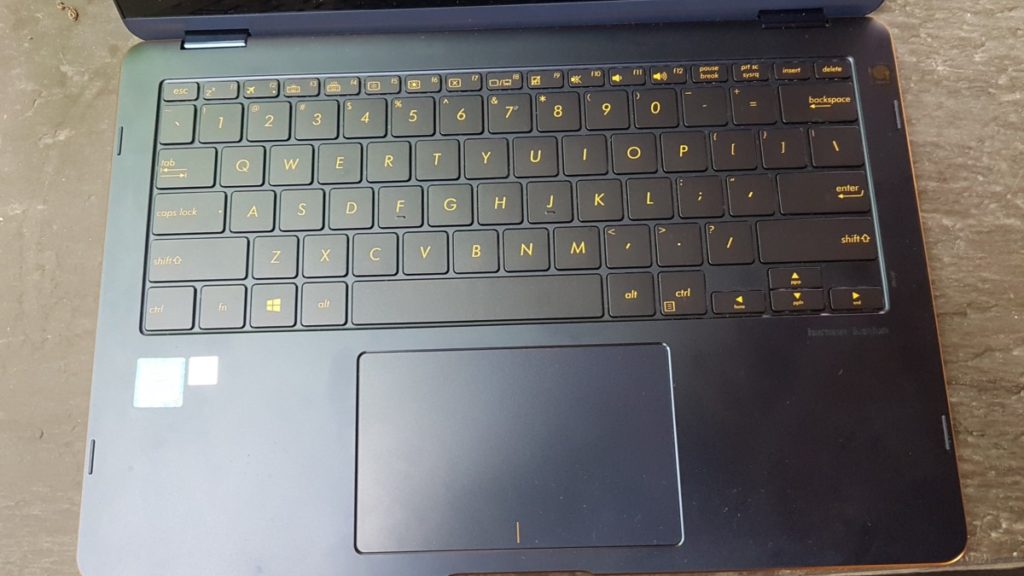 The Full HD touchscreen display on ZenBook Flip S is a pleasant surprise, serving up bright, vibrant colours that are visible under daylight. It does a dab hand for Netflix movie watching duties as well in tent mode.

Screen responsiveness was excellent as well with touch and with the provided stylus which allows for the slate to be used to some degree as a sketching tool or for other artistic endeavours. 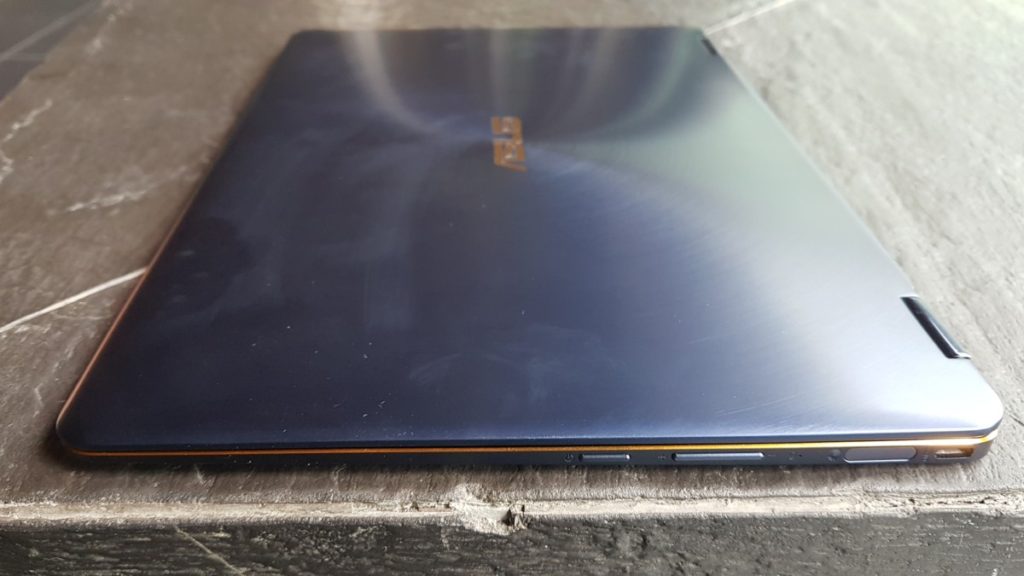 Audio from the downward-firing, underside-mounted speakers was serviceable at best with moderate volume, a fairly flat soundstage and middling detail. It’s sufficient for personal listening though you’d best tote your own headphones if you’re going to be listening to anything for extended lengths of time.

Somewhat disconcerting is that the Zenbook Flip S runs hot. On moderate settings and average screen brightness while just browsing the internet and churning a few emails, the left side of the notebook became sufficiently hot enough that using it on our lap was a very uncomfortable proposition. Holding it in tablet mode also blocks the cooling vents on the side which is an aspect of the design that future incarnations would hopefully revise. 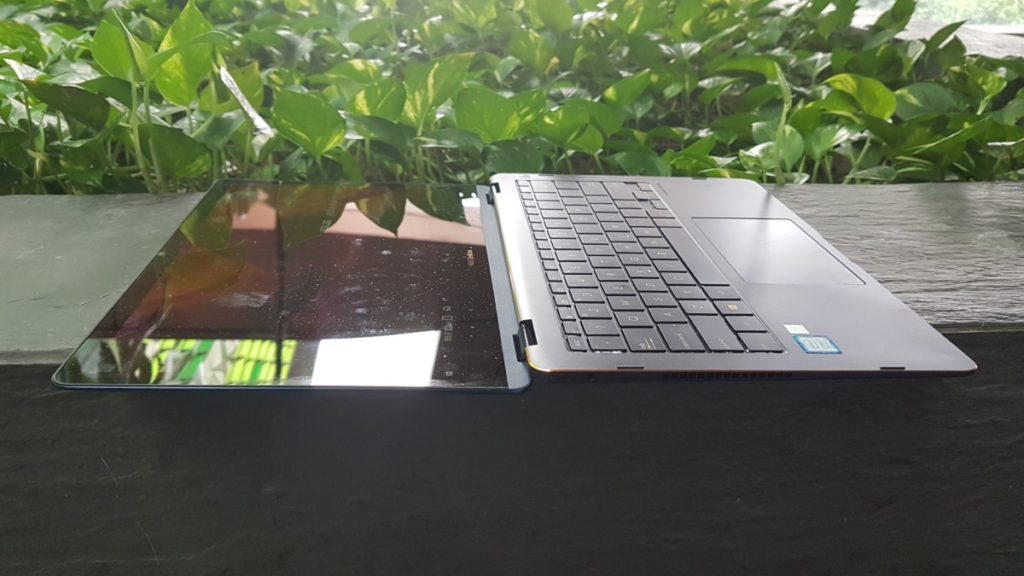 Battery life was rather average and falls short of the quoted eleven plus hours. With a moderate workload that consisted of writing this review, watching a couple of hours of Netflix and Youtube  as well as crunching through some emails, the Flip S managed to last enough for a full working day at about eight or so hours with a bit left before needing a top-up.

It has enough legs to last most scenarios and the provided charging cable and power pack is light enough to make it a viable prospect to carry it wherever you go. 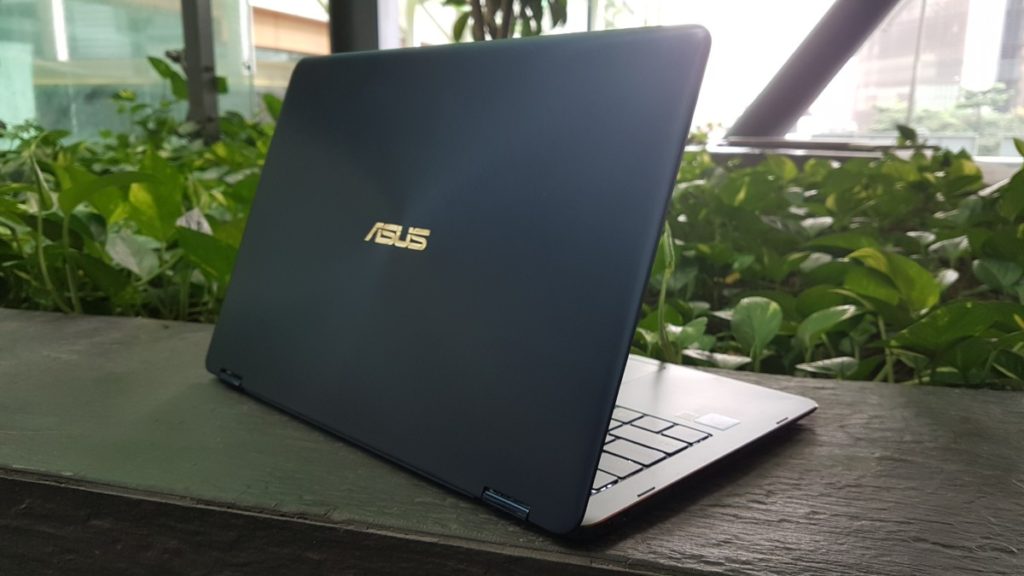 The ZenBook UX307UA, on its own virtues is a slim, well designed convertible that does what it sets out to do in a suitably fetching fashion though this is tempered by a chassis that runs hot and average battery life for its category.

It doesn’t come cheap but Asus doesn’t nickel and dime you by forcing you to purchase extra accessories to go with it and they’ve bundled in a stylus and mini dock with the whole notebook on the house, which goes quite a ways to salving the hefty RM6,699 price tag.

If you prioritise performance, lightness and good looks and are looking for something that will turn heads when you whip it out at your local barista joint, the ZenBook UX307UA is right up your alley.